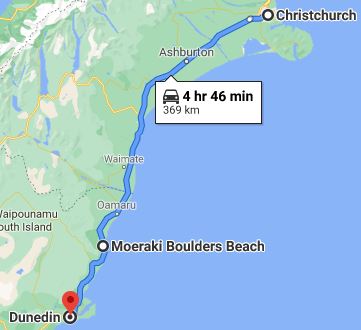 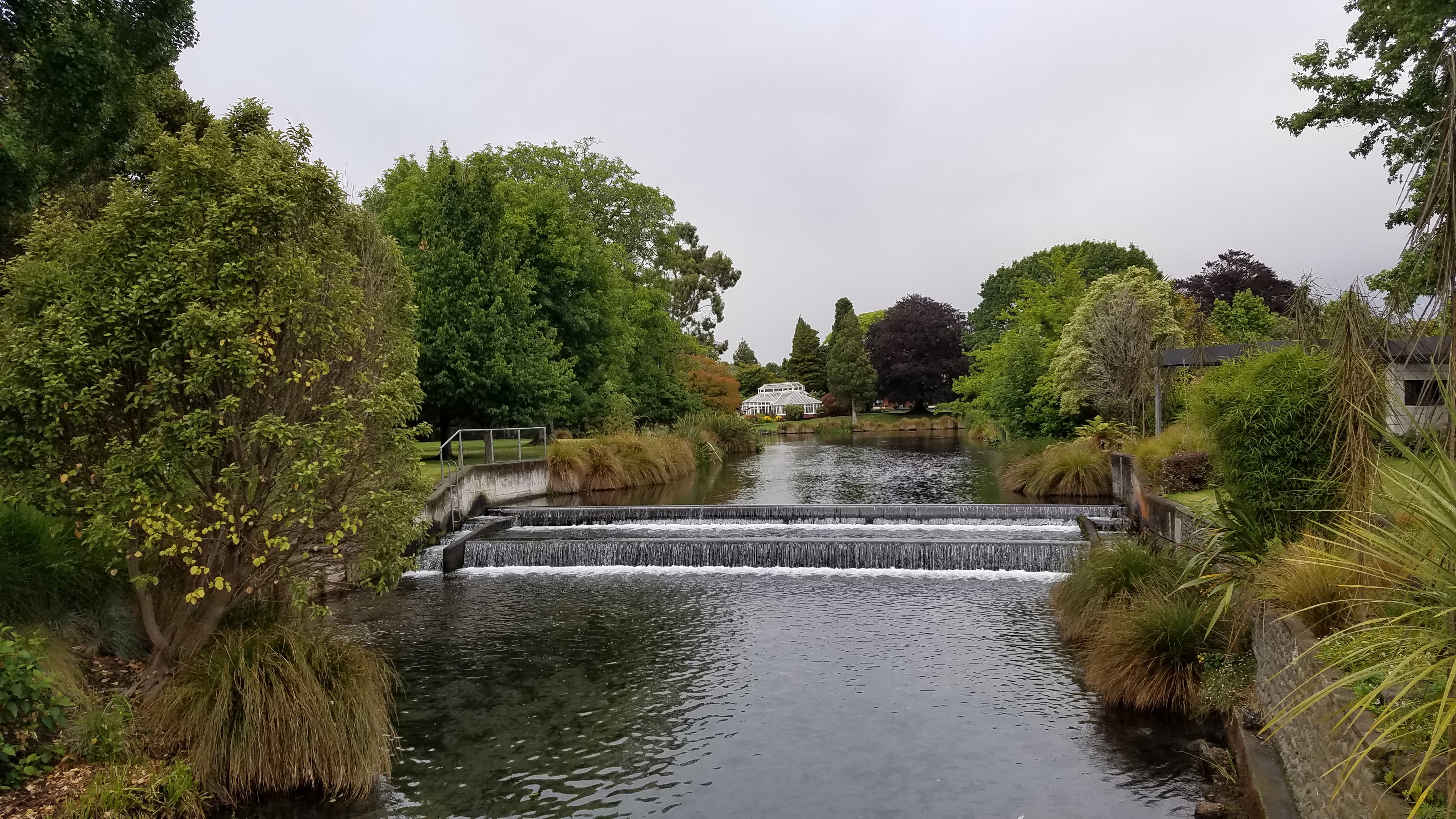 Having consumed an expensive, mediocre Christmas dinner in the hotel’s dining room because we had no other choice, we weren’t interested in an expensive, mediocre Boxing Day breakfast in the same location the next morning. Fortunately, Michael had planned ahead and booked a table at Drexels Breakfast Restaurant. On the way there, we made a brief stop at a meetinghouse of The Church of Jesus Christ of Latter-day Saints, built by volunteer labour missionaries in the 1960s. It is situated in what is surely one of the prettiest settings of any LDS chapel in the world, adjacent to the Avon River and Mona Vale Park. 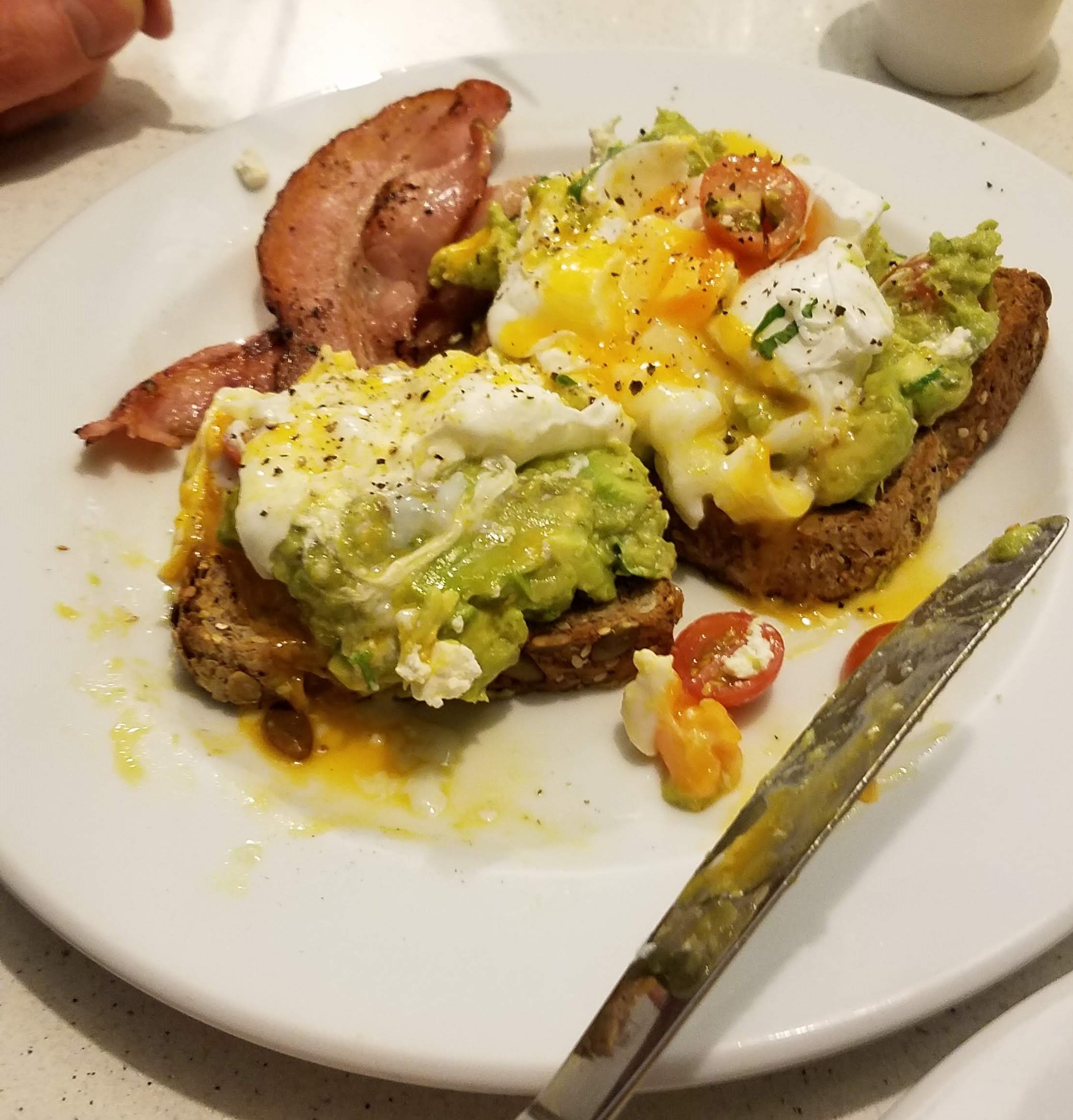 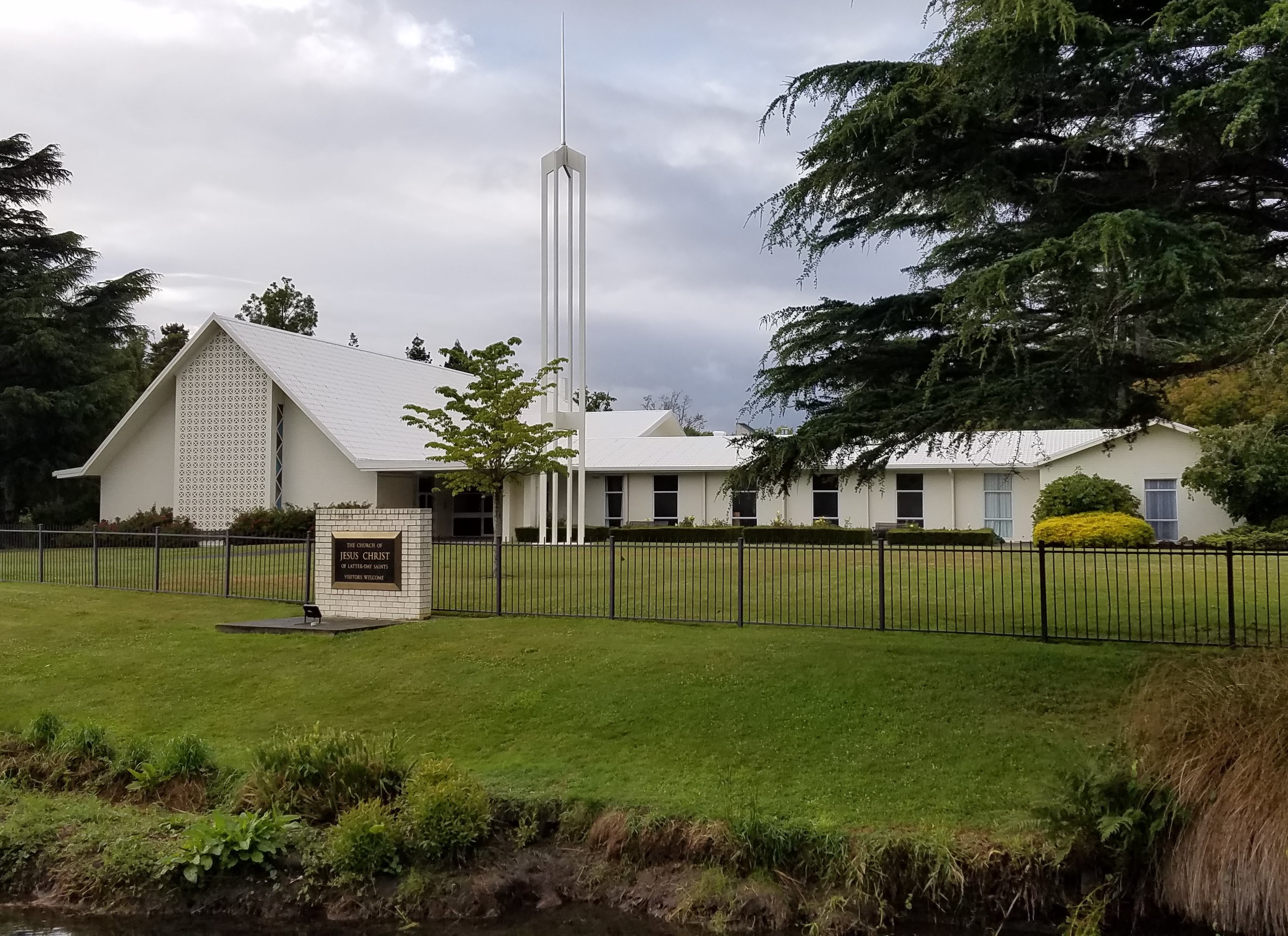 Drexels Breakfast Restaurant is located in a less picturesque shopping mall a few kilometres away. We could tell immediately that it was as popular as the reviews said it would be and were glad Michael had made a reservation. Opened in 1986, the restaurant claims to be possibly the first in New Zealand to specialize in breakfast. The original owner-operators were a couple: the wife a London-trained Kiwi chef, and the husband a short-order cook who had learned his trade working at various diners while attending university in the U.S. The place really should have been called Drexels American Brunch Restaurant because, in addition to the expected eggs-and-sausage plates, the menu included “Iowa-style” pancakes and a number of Mexican-inspired dishes. Nancy and Eva could not resist ordering the chicken enchiladas, because where else in the South Island were we likely to find such fare? Diane and Michael had the Avocado Smash Toast with “streaky” bacon (the Kiwi term for American-syle bacon, as opposed to regular NZ bacon, which is what Americans call Canadian bacon. Confused? So were we at first.) We were intrigued that a large percentage of Drexels’ customers were Asian, causing us to wonder exactly what it was about American breakfast cuisine that appealed to that sector of New Zealand’s population. We had no cause to wonder, however, why Drexels is so popular. 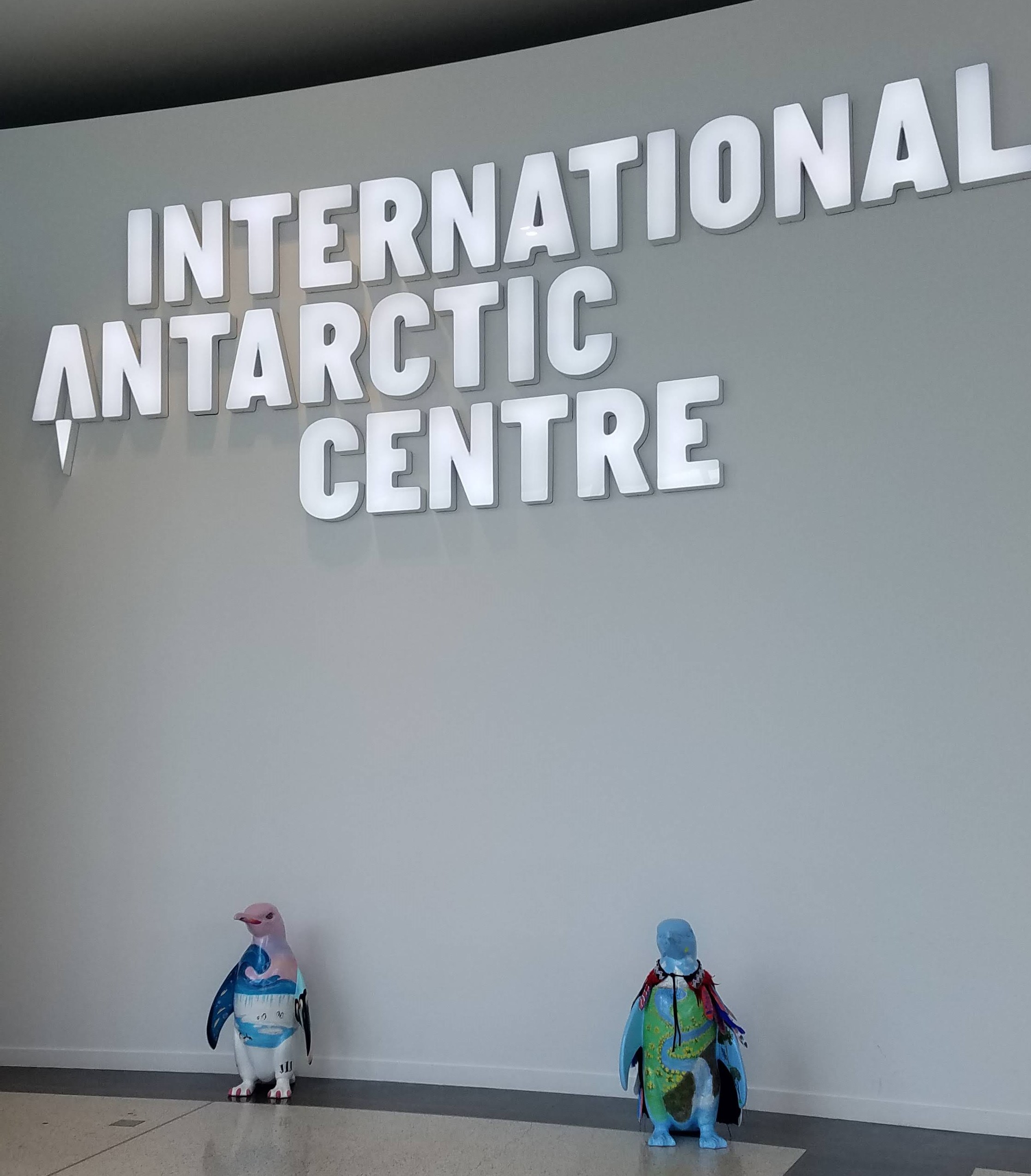 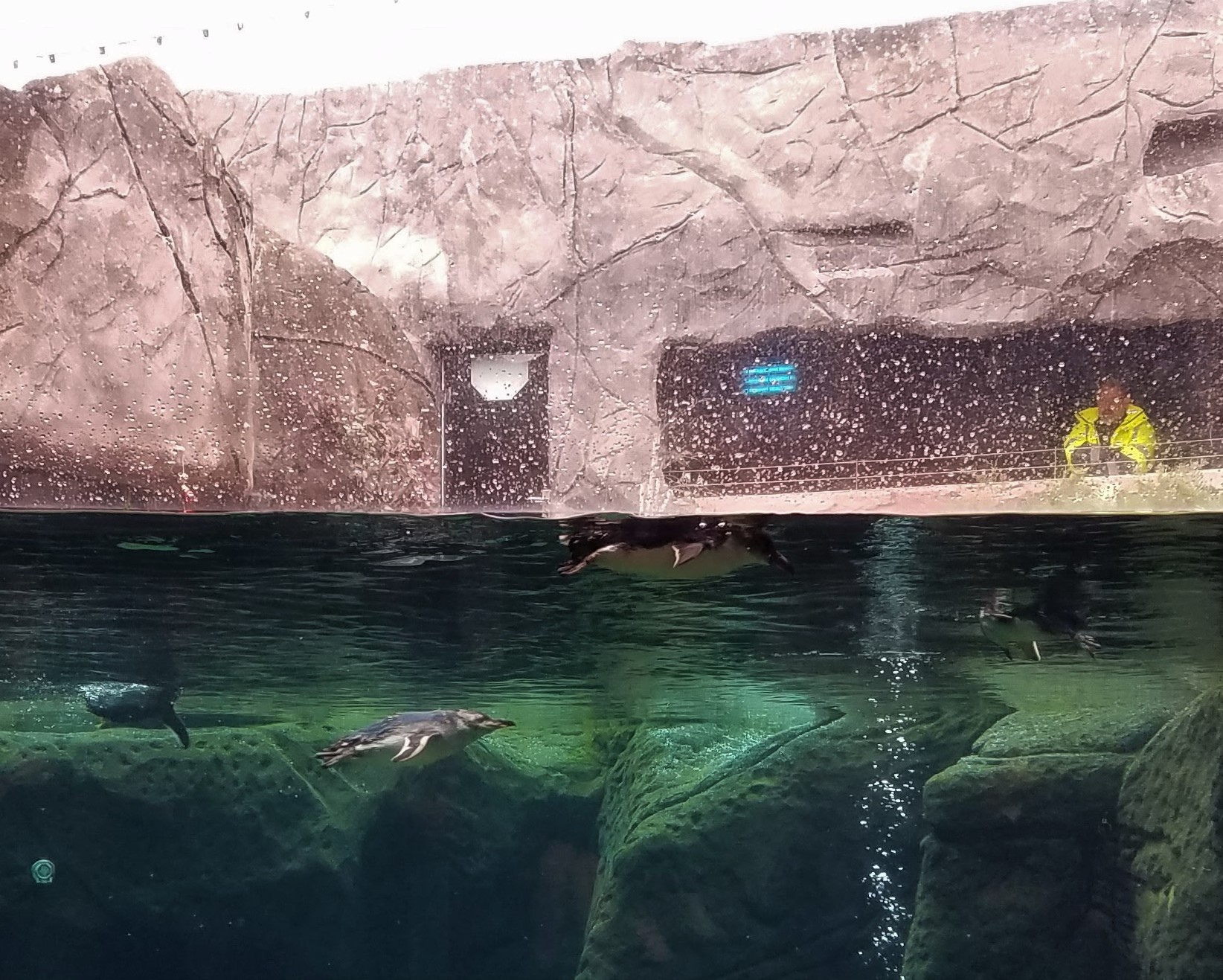 After the filling repast, we headed back toward the airport to visit the International Antarctic Centre. Christchurch is one of five cities in the world known as a “Gateway to Antarctica,” not only a point of embarkation for travelers but also a conduit of information about the icy continent’s wildlife, geography, and history. Relatively few people can actually visit Antarctica, so in 1990 the directors of the Christchurch International Airport decided to create a complex that would give visitors a taste of the Antarctic experience and help them understand the scope and value of the scientific research being conducted at the bottom of the earth. The Christchurch IAC is home to the Antarctic research programs of New Zealand, Italy, and the United States, so we were able to talk with a few of the scientists and ask questions about their work. We also could watch a live-cam feed of people at work in the New Zealand research station at Scott Base in Antarctica itself. 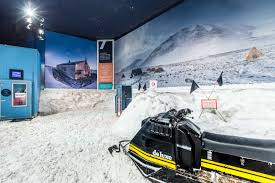 Inside the Storm Dome

In addition to the strictly educational, the IAC offers some touristy attractions. One that we could have missed was the 4-D animated movie that jostled our seats and sprayed water in our faces—although we admit that the real snowflakes falling from the ceiling were kind of cool. The most chilling experience of the morning occurred inside the Arctic Storm Chamber, in which we endured blowing snow in a simulated blizzard with temperatures dropping to –18°C (–5°F), not including the windchill. It actually was pretty scary even though our minds were trying to tell us that it was just a simulation. Our favorite experience was watching a few dozen little blue penguins cavort in a pool from viewing stations located both above and below the waterline. These were distressed birds the IAC had rescued and rehabilitated. One of the caretakers explained that all their penguins are disabled (blind perhaps, or missing a flipper) and thus would never be able to survive in the wild, so the IAC provides them with a sheltered habitat for life. 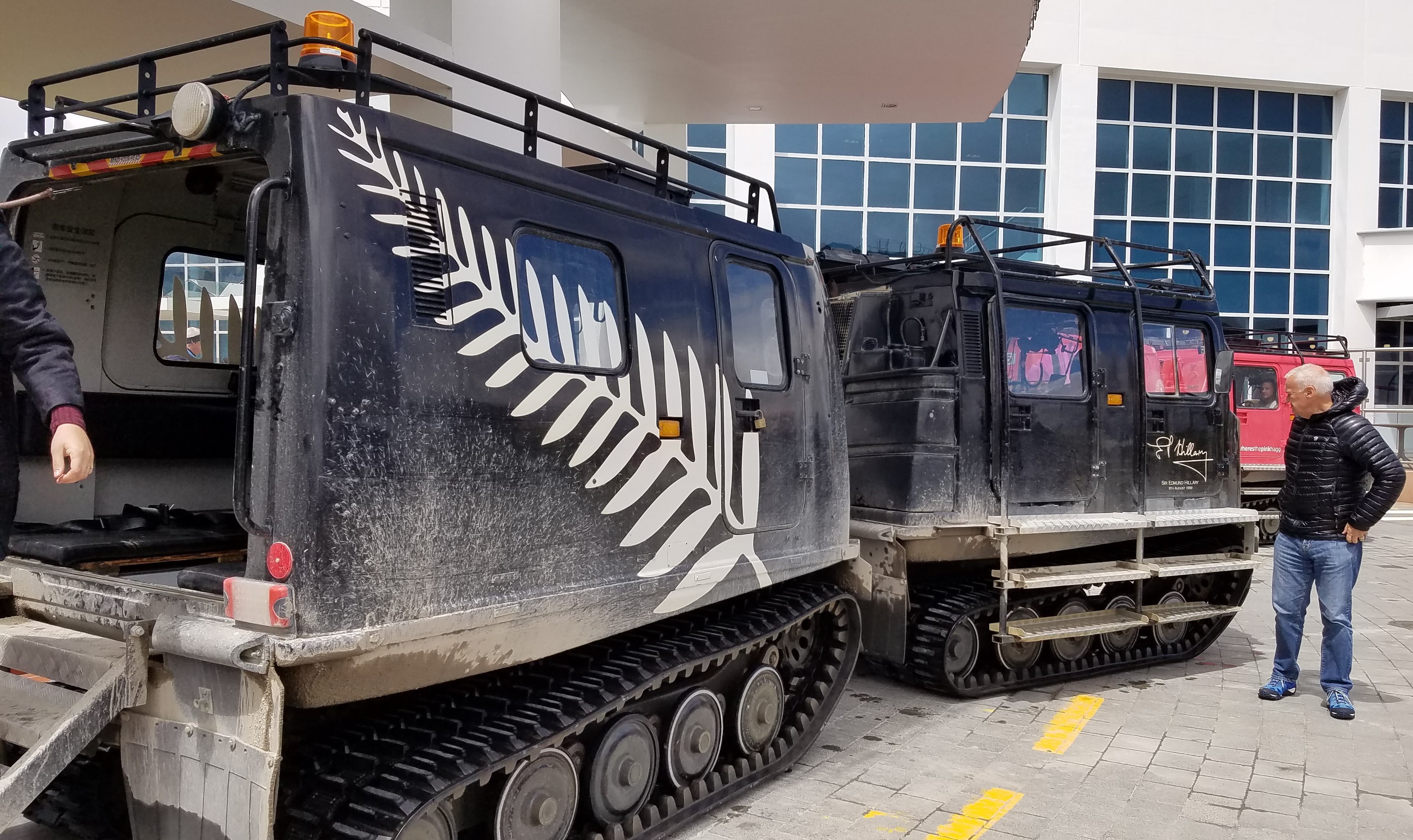 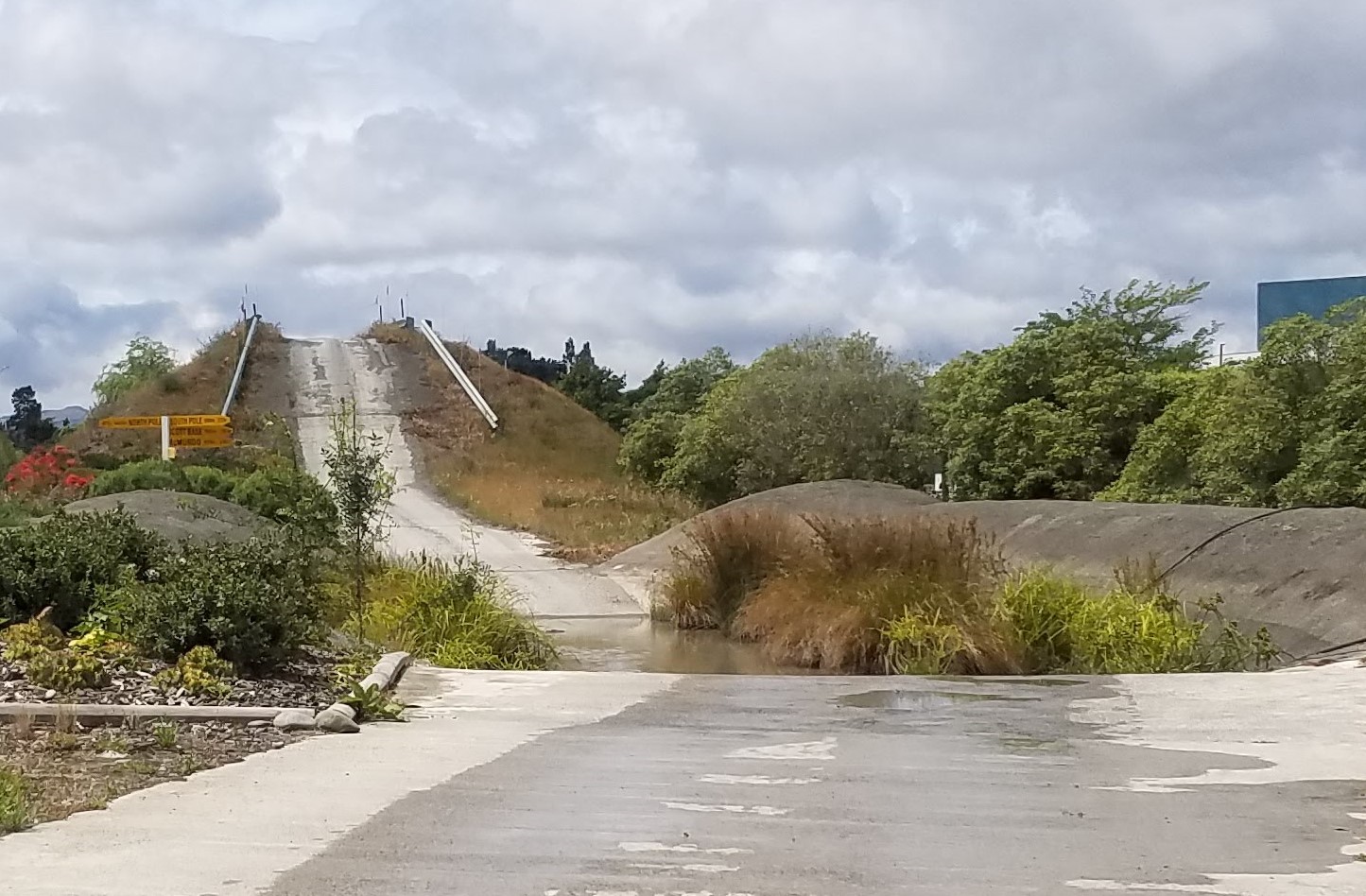 Part of the obstacle course for the Hägglund “field trip” 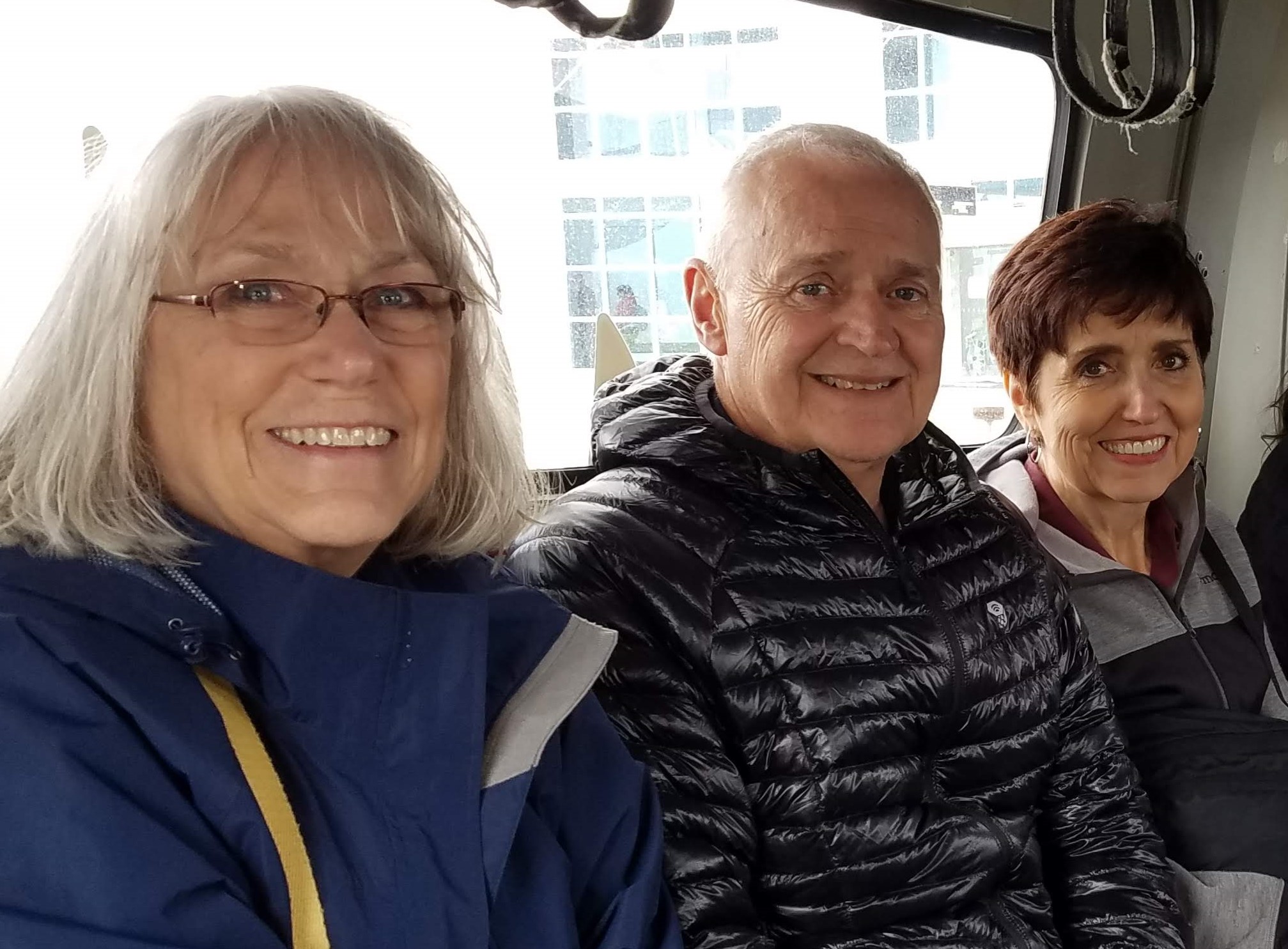 Diane, Barry, and Eva in the Hägglund, before we got rattled

Before we left the IAC, we had to go for a ride in a Hägglund, an amphibious vehicle originally developed in 1976 for the Swedish army to navigate over arctic terrain. Each of the four tracks in the dual-unit vehicle is individually powered, like a four-wheel-drive. The front compartment can carry six people, and the rear compartment eleven. Our party sat in the rear as we bumped and sloshed through an obstacle course that included steep inclines, loose gravel, water hazards, and a road surface covered with old tires. The Hägglund could handle it all, but we passengers would have appreciated better shock absorbers.

Lunchtime rolled around before we were finished with everything there was to do at the IAC. A little behind schedule and still full from breakfast, we decided to forgo eating at the IAC’s café and instead make a quick stop at a grocery store on our way out of town. The Countdown store we found happened to have a bakery next door, so each of us chose something we could easily eat in the van and then got on our way to Dunedin. 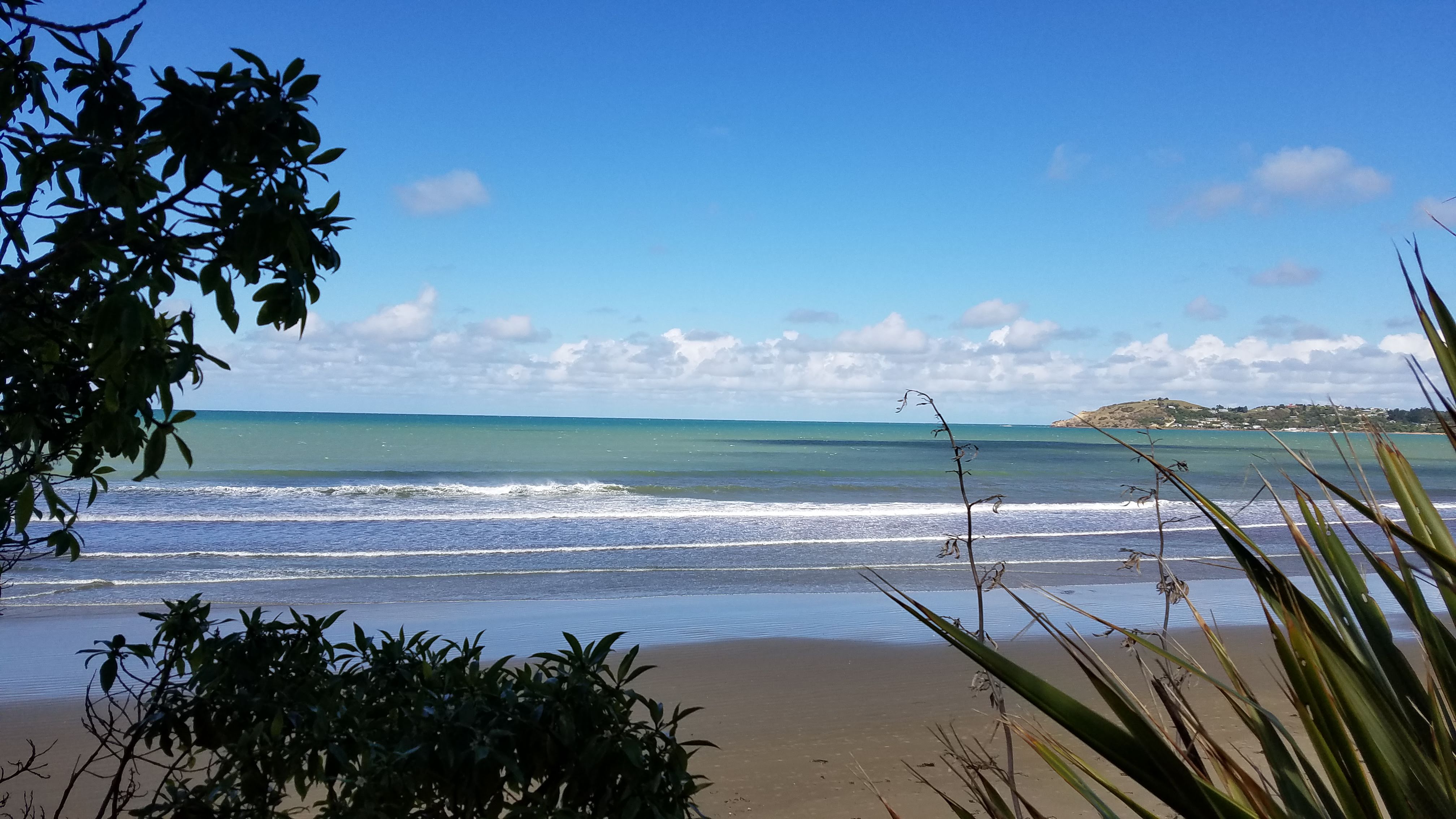 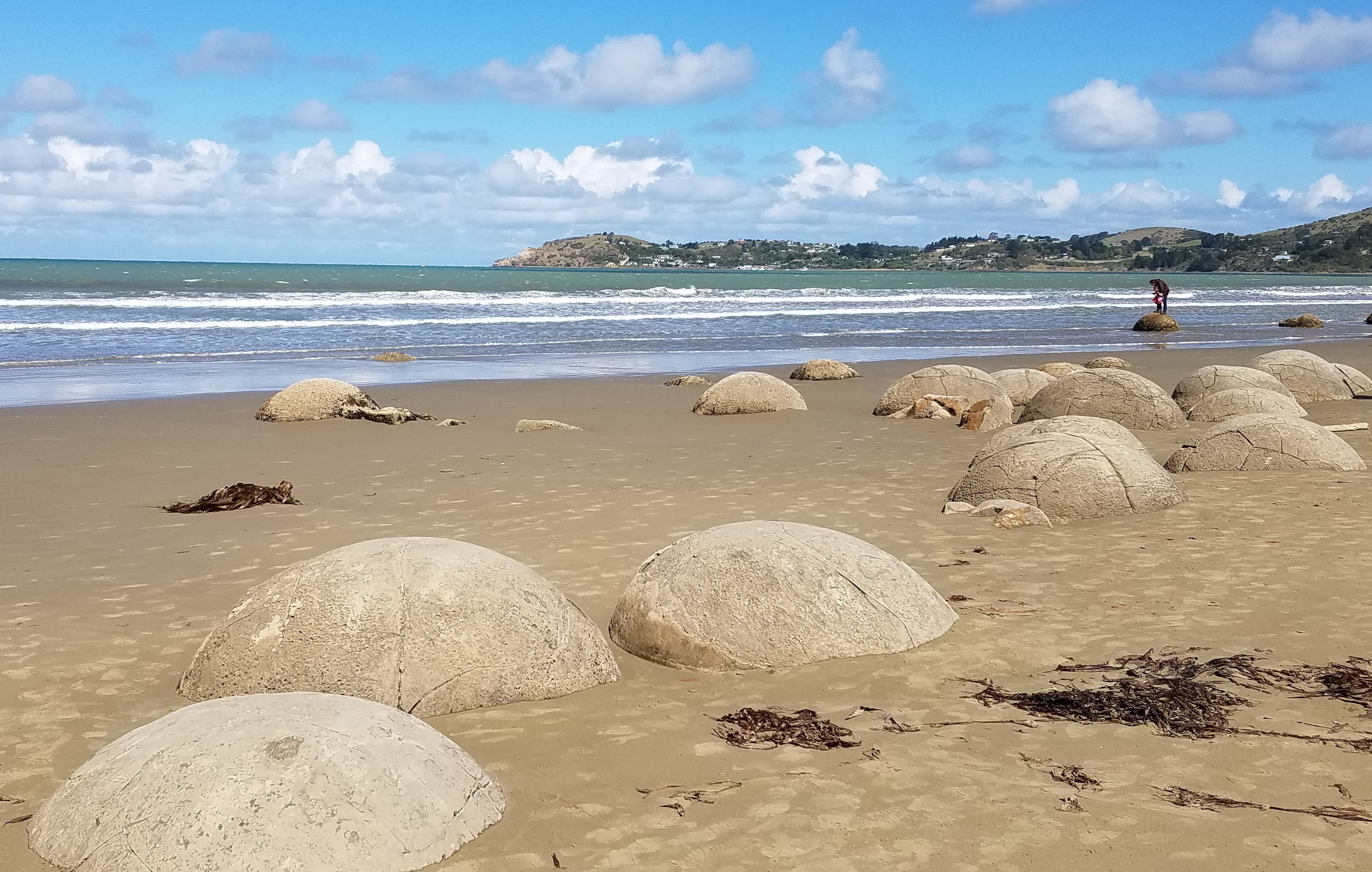 About three hours into the drive, we stopped to see the Moeraki boulders: a group of spherical rock formations lying along a stretch of Koekohe Beach between the towns of Hampden and Moeraki. Now protected in a scientific reserve, the boulders are examples of septarian concretions, estimated to have taken 4 to 5.5 million years to form. The fine-grained rocks consist of mud, fine silt, and clay, cemented by calcite. The centers are relatively weak and are riddled with cracks, but gradually these have been filled with yellow calcite, along with small amounts of dolomite and quartz. The Moeraki Boulders are notable for their near-perfect roundness and their unusually large size, ranging from 1 to 7 feet in diameter. 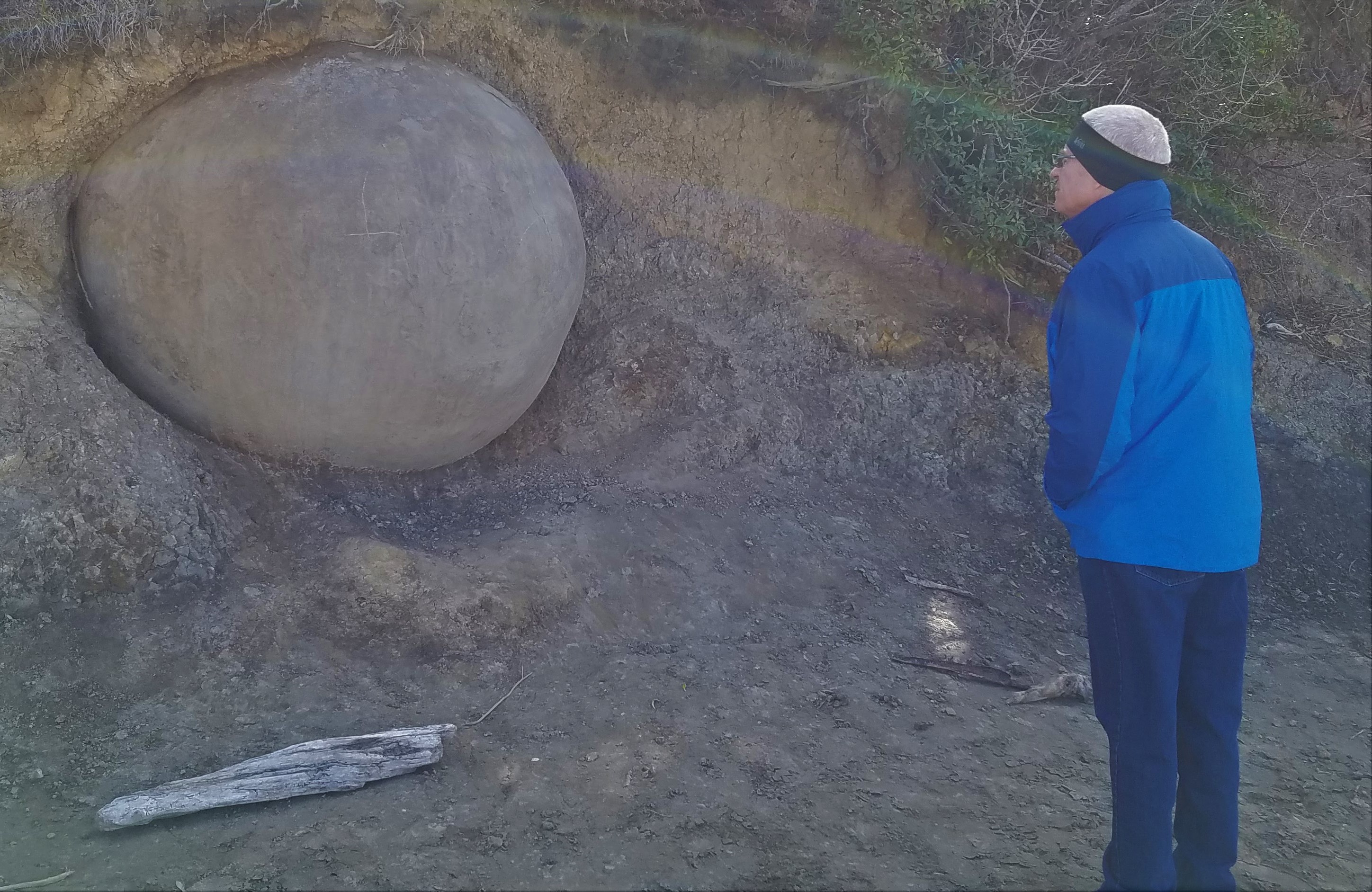 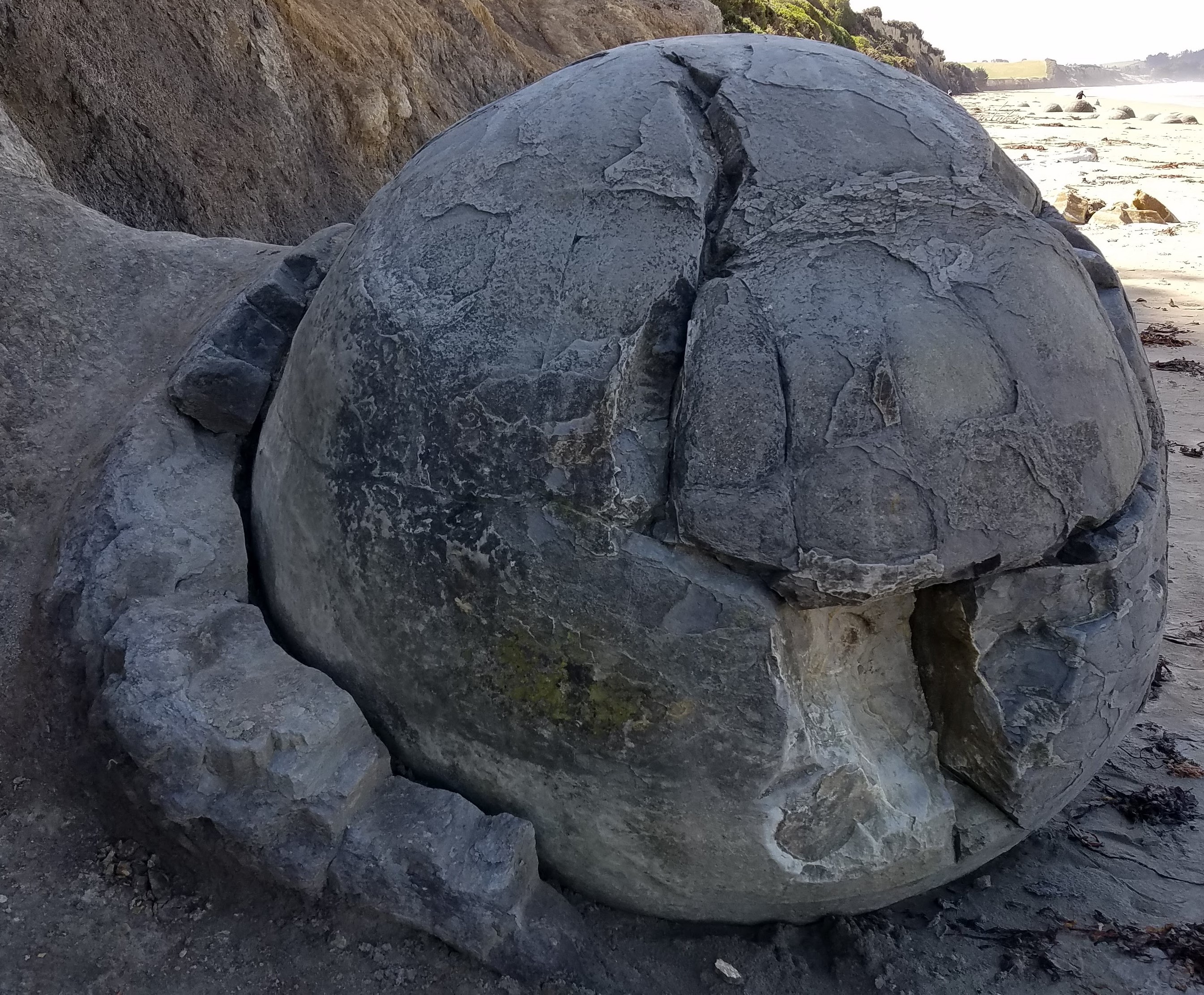 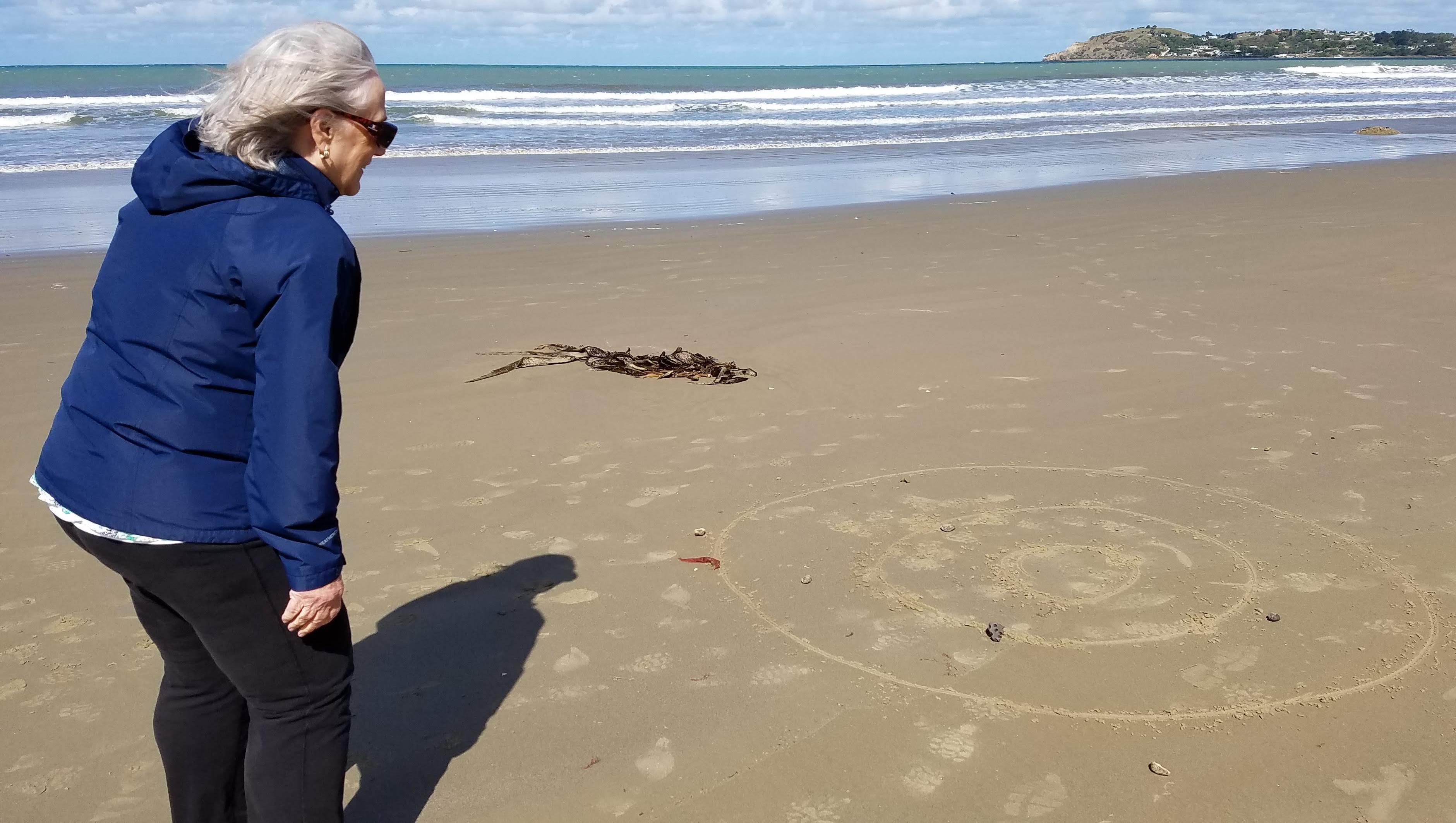 Diane tries to hit the bullseye

Local Māori legends explain the boulders as the remains of eel baskets and gourds washed ashore from the wreck of Arai-te-uru, a large waka (sailing canoe) that came from Hawaiki. The rock formations that extend seaward from Shag Point are supposedly the petrified hull of this wreck, and the patterns on the boulders suggest the remains of the canoe’s fishing nets. A nearby rocky promontory represents the body of the canoe’s captain. We thought the boulders looked like dinosaur eggs, or maybe a set of boules left on the shore by some elderly giants. 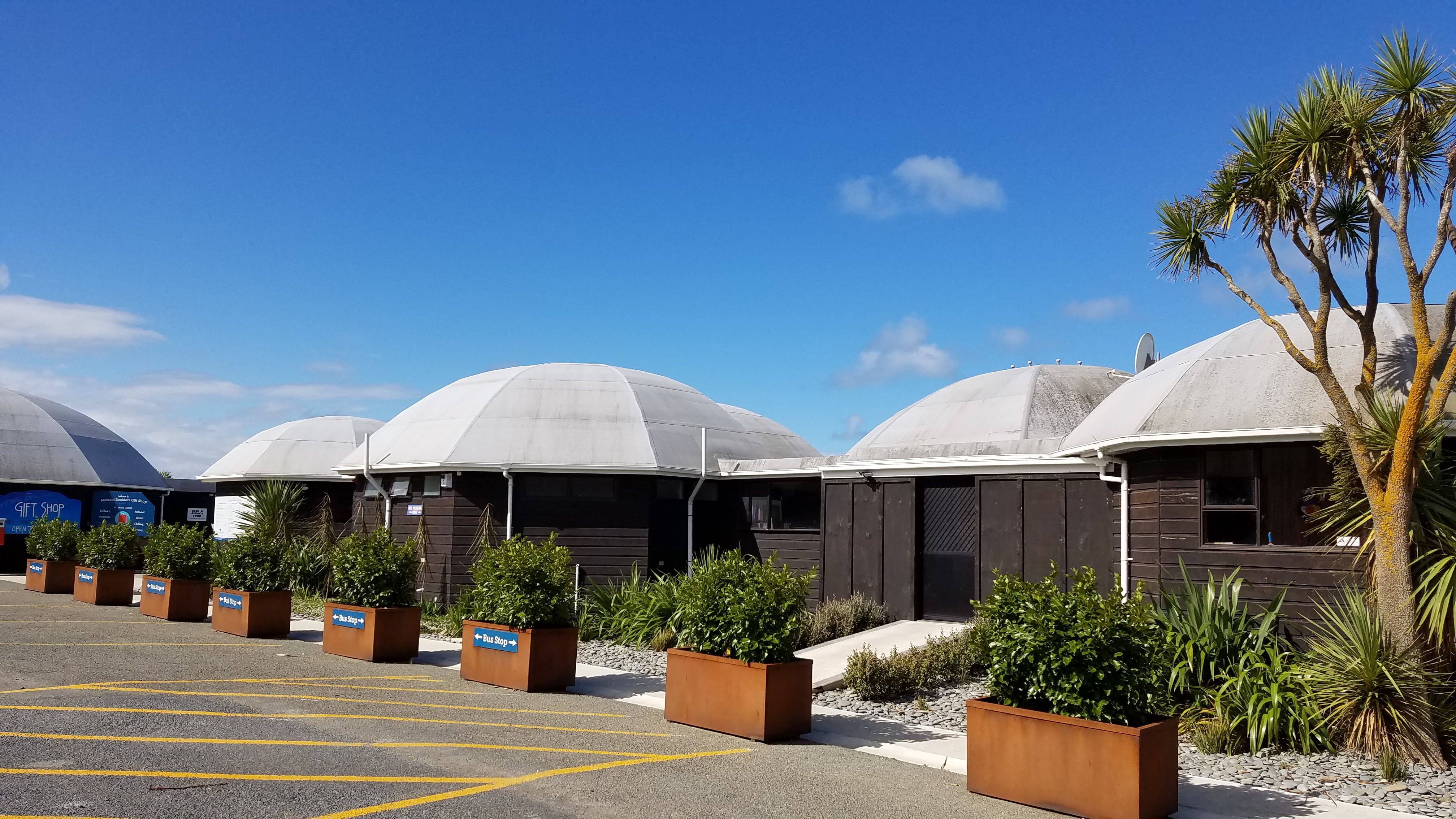 While we walked among the boulders on the beach, Barry taught us a game he had played as a youngster. He drew a set of concentric circles in the sand, then instructed us to pick up some pebbles and toss them as close to the center as we could. A simple concept, but—like darts or cornhole—the skill is not so simple to master.

It was a good day for windsurfing near Hillgrove. (We just observed) 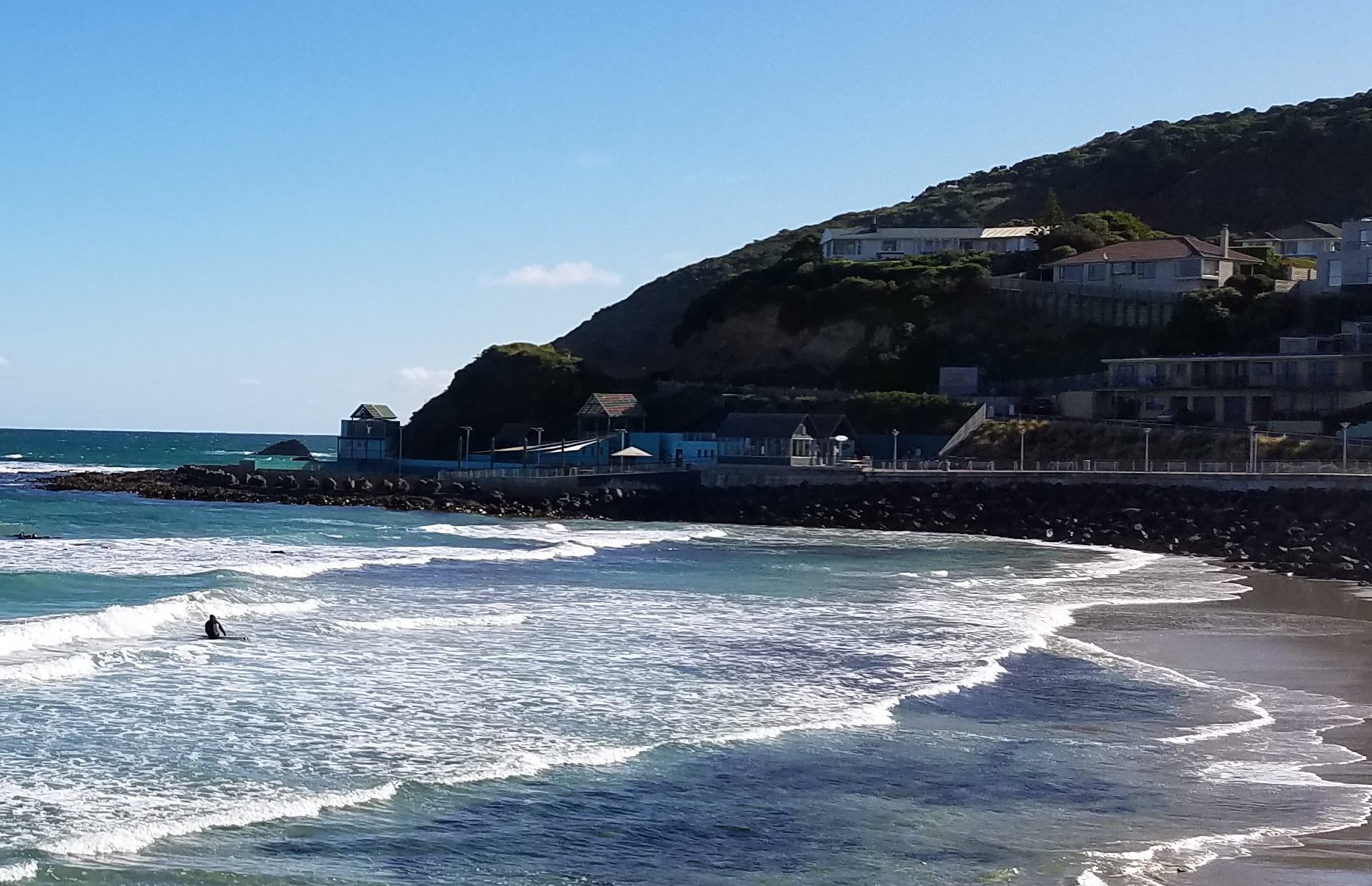 By the time we got to Dunedin, a strong wind had brought a chill to the sunny afternoon. We drove past the campus of Otago University and the splendid Dunedin Railway Station and went straight to beautiful Saint Clair Beach, where we put our names on the list for a table at the Esplanade’s eponymous restaurant. Even though it was one of the few eateries open on Boxing Day, we were seated within 30 minutes. The Italian cuisine was worth the wait: beetroot salad, excellent wood-fired pizzas, spinach ravioli, and gnocchi in tomato sauce (more like a tasty mashed potato casserole than like little potato nuggets). The favorite treat for some of our party was the order of garlic and parsley shoestring fries we all shared. For dessert, Nancy and Diane shared a brulée lemon tart with vanilla ice cream and fig; Michael had a dark chocolate torta with mascarpone. 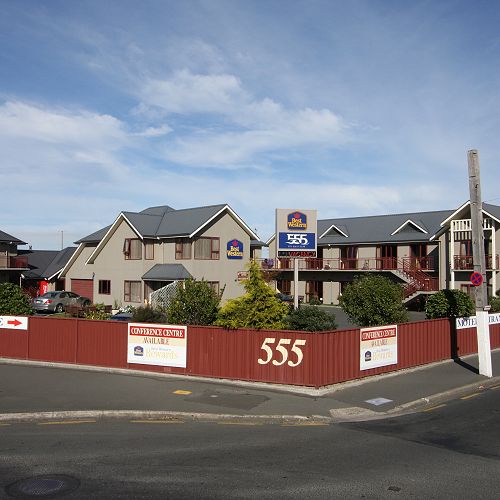 Nestled among the hills extending east to Otago Bay, south to the Pacific Ocean, and then rising to mountains in the west and north, Dunedin is a city with a spectacular geography. Not quite so spectacular was the Dunedin Best Western where we spent the night. Though humble, it was comfortable and affordable. When the proprietor saw our missionary name badges, he claimed that the “president of your whole church” regularly stayed at his establishment whenever he visited Dunedin. When he named the man, we realized that he was talking about the president of the Wellington Mission—which does include the South Island, but isn’t quite the “whole church.” The friendly proprietor may have been a bit mistaken, but we appreciated his willingness to let us use the motel’s small conference room for a game of cards. He also told us that we could help ourselves to coffee or the cold beer in the refrigerator. We passed on that offer, but did enjoy some spearmint tea—a soothing finish to a fun-filled day.