Our education in New Zealand’s national sports obsession began before we even left the U.S. One afternoon while we were in training in Salt Lake City, we went to a bank to get some documents notarized. Of course, the notary asked us where we were going to serve on our mission, and when we told him Hamilton, New Zealand, he suddenly became very animated.

“Oh, then you will have to learn about rugby!” he said. “Hamilton is the site of one of this year’s ‘sevens’ world series tournaments, and I think it’s happening at the end of January. Rugby is very big in New Zealand, so everyone will be talking about it. Do you know much about rugby?”

“Oh, then you will have to at least learn the basics, or you’ll be completely lost in most everyday conversations.”

“Are you from New Zealand?” we asked.

“No, I’m from Fiji,” he replied. “I’m an ‘FBI’—a Fiji-born Indian—and Fijians are as obsessed with rugby as the Kiwis. New Zealand dominated the world series for a long time, but Fiji has won the championship three times since 2015. And the U.S. team is getting much better. Last year they actually made the finals—but did the American press cover it? No! Can you believe that? The U.S. actually made it to the finals in the world rugby series, but you couldn’t find it anywhere on American TV! It was absolutely disgraceful!”

So for the next twenty minutes, we got a crash course in rugby. The “FBI” explained exactly what “sevens” means, outlined the rules, named star players we should learn to recognize, and predicted the outcome of this year’s world series. At the time, all we really wanted was the notary’s stamp on a couple of documents, but once we got to New Zealand and those everyday conversations full of rugby references began to occur, we were grateful for the primer he had provided. 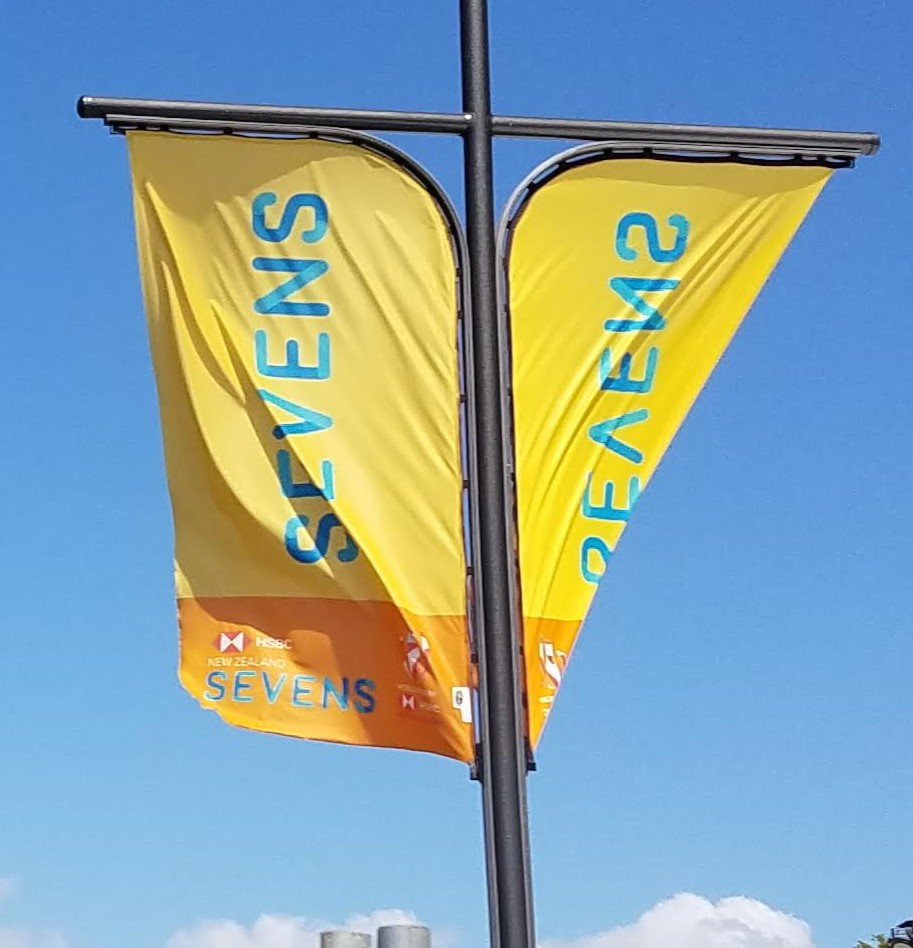 Nearly every billboard in Hamilton was splashed with men in rugby gear touting one product or another—if the ad wasn’t promoting the Sevens World Series itself. Nearly everyone we passed on the street other than LDS missionaries was wearing some sort of New Zealand All Blacks swag; even infants were sporting All Blacks onesies. Then on Sunday 26 January, when we were returning home from auditioning for the Hamilton Civic Choir, we made the mistake of innocently following our car’s navigation system into central Hamilton, where the Sevens tournament was in full swing. The roads immediately around FMG Stadium Waikato were closed to traffic, and others were blocked by hordes of rugby fans streaming toward the entrances. Nancy directed Michael to find a place to park so we could get out and take photos—not an easy task, but we felt that it would be worth the effort to be able to experience and record this essential moment in Kiwi history. 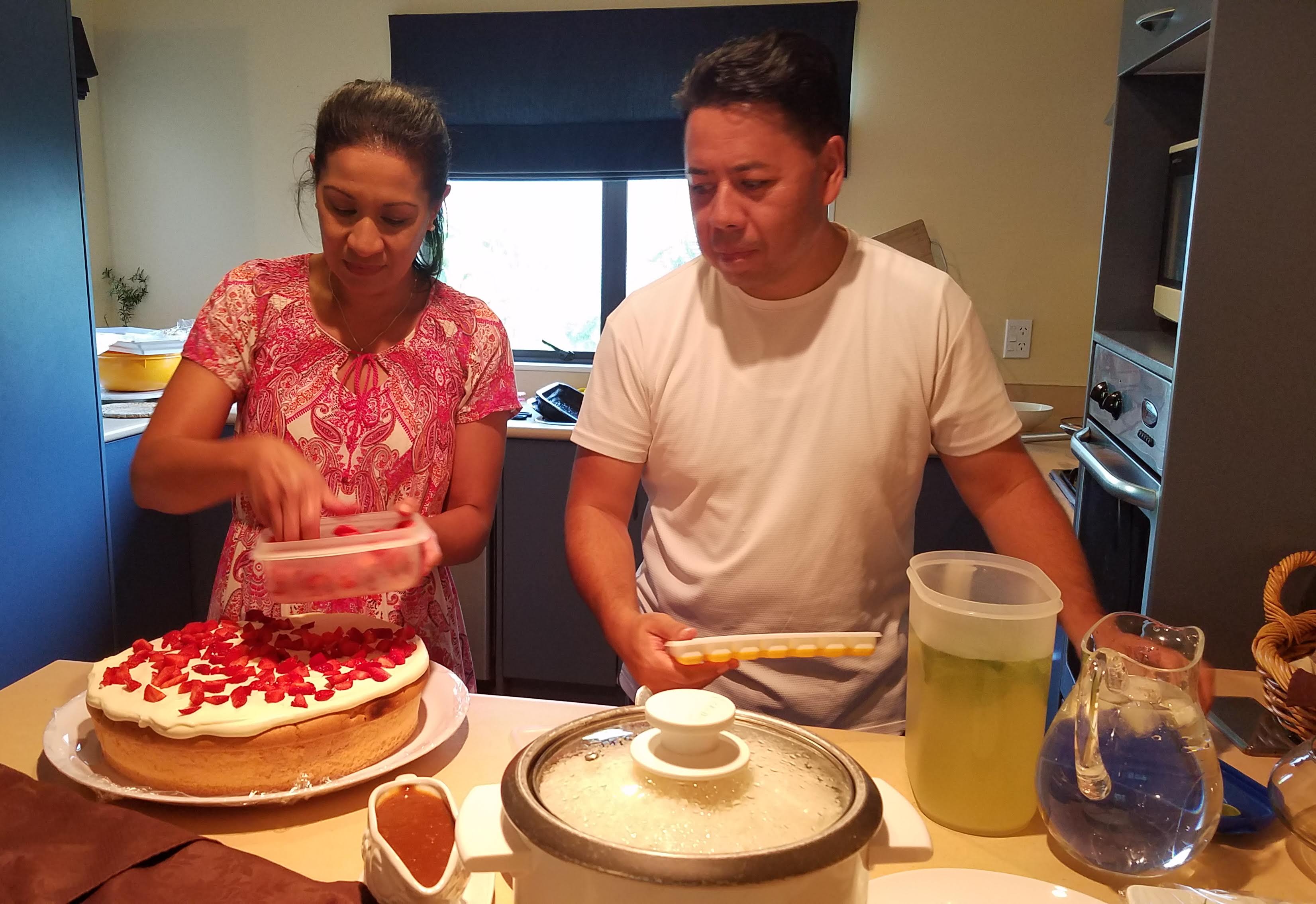 Jason, the ward mission leader, and his wife, Vae, had invited us to join them for dinner that same evening, along with the young proselyting missionaries serving in Dinsdale Ward. When we mentioned that we had accidentally found ourselves in the midst of rugby mania, Elder W, a solidly built Welshman who had played rugby for his school team, gladly picked up where the FBI in Salt Lake had left off in our education about New Zealand’s national sport.

So when Jason mentioned that the men of Dinsdale Ward were planning a guys’ night out the following Saturday to watch a broadcast of the local rugby team playing in Auckland, Michael decided that he needed to go. (Dinner was included in the event; when Nancy asked later what they had had to eat, Michael shrugged and replied, “Guy food.”) Watching the game, he was pretty lost at first. The one rule he knew was that the ball can be passed only to someone behind the thrower (which seems counterintuitive). He also knew that the game includes scrums, but after watching an entire game’s worth, he still isn’t quite sure what purpose they serve. The other men at the party were very patient with him, trying to explain the rules, answer his questions, and help him follow what was going on. By the end of the game, Michael had a better sense of how the game works, but still felt very much a neophyte. 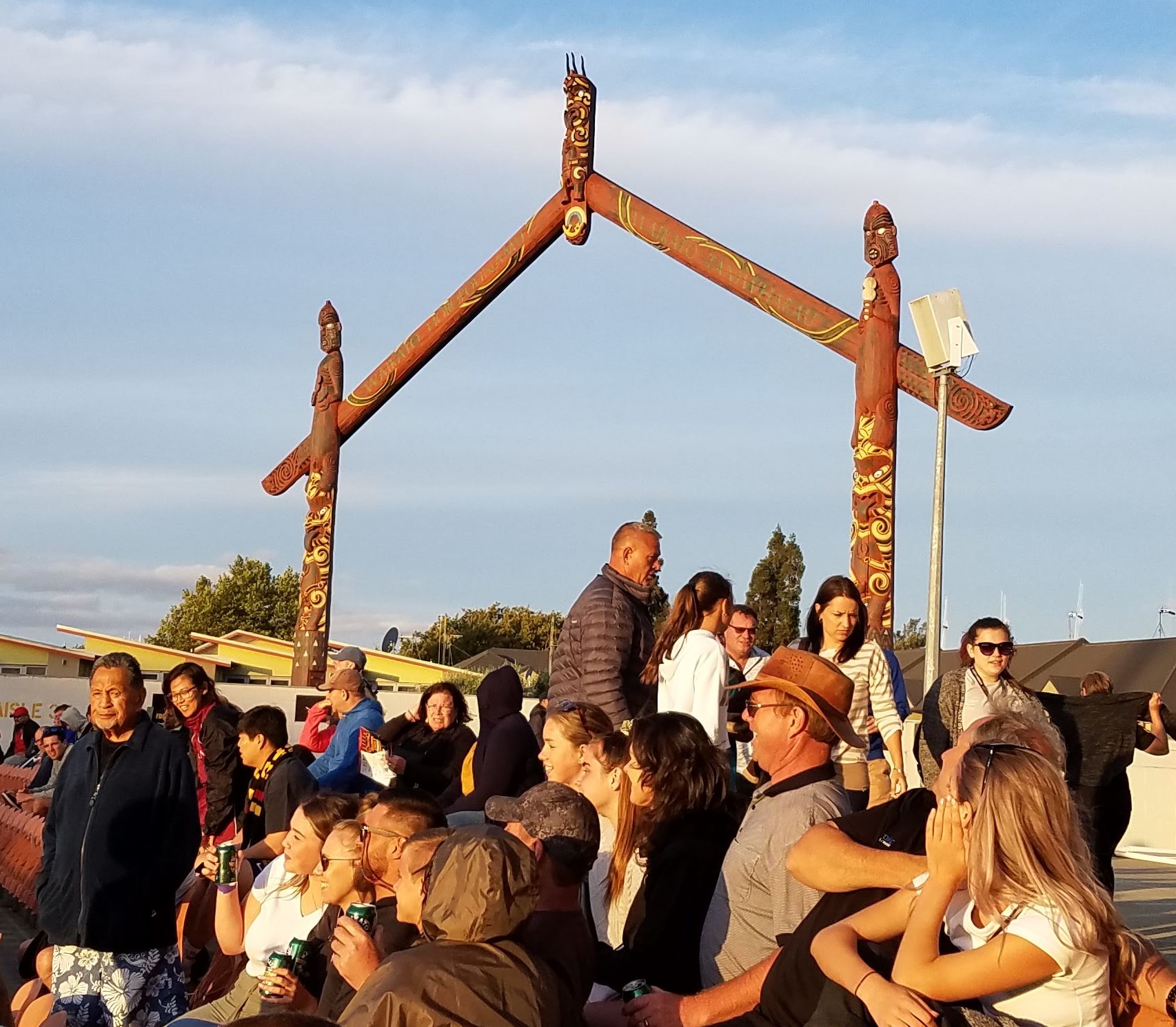 A few days later, Jason invited us to go with him to a live rugby game at FMG Stadium Waikato on Saturday 8 February: the Gallagher Chiefs (the Waikato home team, named for a local company that produces electrified fencing) vs. the Christchurch Crusaders. When the Garlicks heard that we were going, they decided to come along, and when we got to the stadium and found our seats, we were delighted to be surrounded by a whole contingent of people we recognized as members of Dinsdale Ward. Sheridan, a young man who was sitting near us, kindly provided helpful explanations of the rules and key plays. The ones we most enjoyed watching were the lineouts, in which all the forwards gather to lift one player up so he can catch the ball when play resumes after the ball has gone into touch (out of bounds).

Nancy was happy that her first experience watching rugby was a pleasant one, and relieved that the game didn’t seem as complicated as American football. Despite having attended scores of football games in her lifetime, she still doesn’t fully understand the ins and outs of downs, but although she found this game less yawn-worthy than anticipated, she admits that her favorite part of the evening was the pre-game show. Representatives of the home team greeted the visiting team with a haka, the traditional Maori war dance in which defenders demonstrate their unity, strength, and military prowess to let the opposition know they are not to be trifled with. The Chiefs’ pre-game precision and passion were impressive, and the team members who actually played the game were pretty good, too. They surprised everyone by pulling out a 25-15 win against the Crusaders, who have won the Super Rugby league championship each of the past three years. We may just want to go back and watch the Chiefs play again.