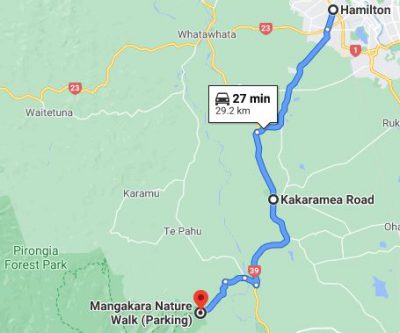 Route to the parking lot

About mid-morning on 17 August, Barry called to let us know that Eva was not feeling well, so we would be on our own for a Monday outing. Before learning that they would not be coming with us, we had planned an easy hike because we knew that Eva had been experiencing some health issues and didn’t want to overtax her, but now we were free to try something more challenging.

Mount Pirongia is visible to us in the distance beyond the temple every day (cloud-cover permitting) as we approach the Matthew Cowley Pacific Church History Centre on Tuhikaramea Road. Thus, every day, Michael hears the siren-song of the bush-clad mountain. At 3146 feet, Pirongia doesn’t present the same sort of challenge as the fourteeners in the U.S. that Michael has summited, but it’s the highest peak the Waikato has to offer—so of course, it must be climbed. 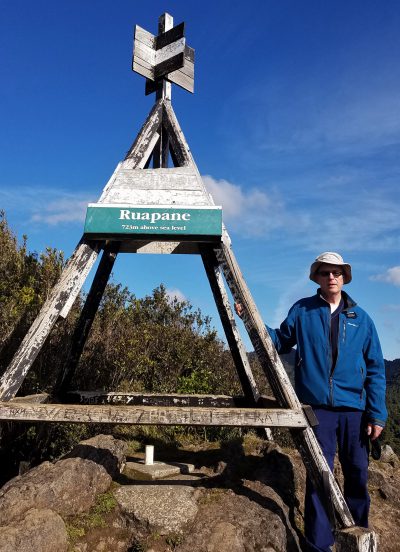 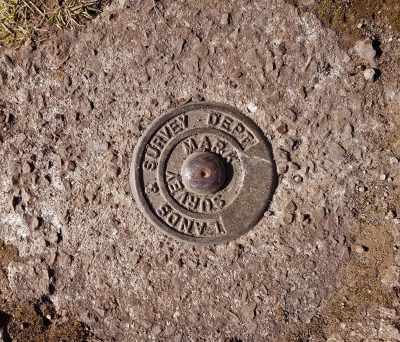 It was too late in the morning to attempt the 13-km round-trip climb to the top, but not too late for the 4-km round trip ascent on the Tirohanga Track to the Ruapane Lookout. The lookout sports a trig station, one of more than a thousand stations used in days gone by to map New Zealand by trigonometric calculation. The Ruapane trig station is located at about 2400 feet above sea level; the Tirohanga Track begins at about 1000 feet.

When we arrived at the carpark, we started layering on our hoodies, windbreakers, caps, and gloves because even though the sun was shining, it was chilly. A group of six women just coming off the track saw us suiting up and predicted that we would be shedding those layers shortly after we started. They were right. The climb was fairly steady for the first forty minutes, aided by a series of wood-framed stairsteps—approximately 460 of them. 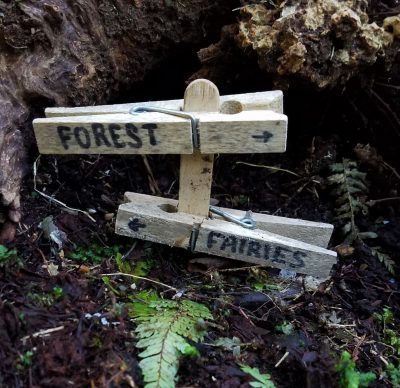 Although we spotted this diminutive trail marker, we didn’t see any fairyfolk

One of the things we most regret leaving behind in Cincinnati is our Merrell hiking boots. We didn’t expect to have as many opportunities to hike here as we have had, but the main reason the boots didn’t come with us is that we simply did not have room for them in our luggage. We hadn’t been here long, however, before realizing that we really did need some sturdy, waterproof footwear, so we began to hunt for something suitable that didn’t cost too much. Shoes are very expensive in New Zealand—about 70 percent more than in the U.S. Initially, Nancy planned to order new boots from Amazon, but because Amazon NZ does not ship everything in their American catalog internationally, she had limited choices, and finally realized that once she had paid for shipping and New Zealand’s Goods and Services Tax, the boots she hoped to order would likely cost more than just buying a pair here. Fortuitously, Rebel Sport (New Zealand’s equivalent of Dick’s Sporting Goods), ran an end-of-season sale in February, where Nancy found some decent Hi-Tec boots at a reasonable price. Rebel Sport didn’t have anything appropriate in Michael’s size, but he was able to order some Merrell waterproof walkers online from a distributor in Christchurch. We were especially grateful for those shoes on the Tirohanga Track—and now wish we had brought our hiking poles. 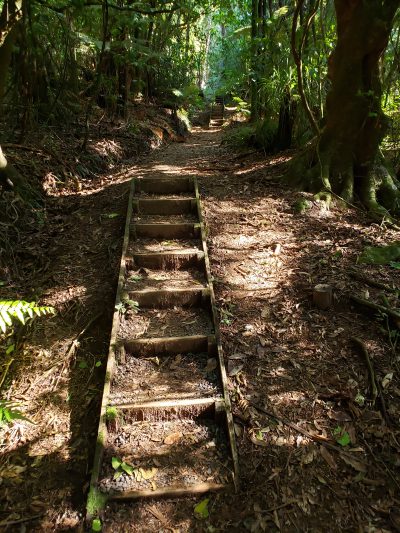 Somewhere on the way up, we encountered a large group of hikers on the way down who were associated with the six women we had met in the carpark. When they learned that we were from Hamilton, they introduced themselves as the Hamilton Monday Bush Trampers and invited us to join their club. They meet at a church in town every Monday morning, carpool to a trail, hike at a pace that works for each individual, then reconvene at a café or pub on the way home to socialize. Most of the participants seemed to be retirees like us, so we’ll definitely consider joining them when we can arrange to spend an entire Monday on a tramp. 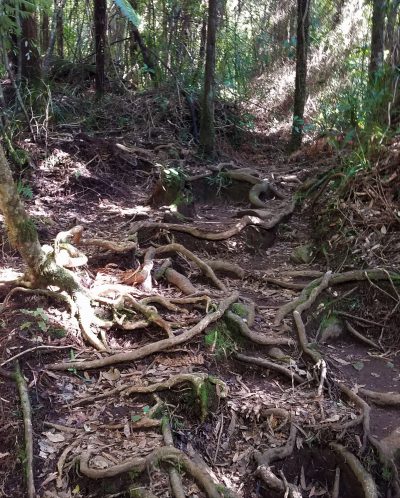 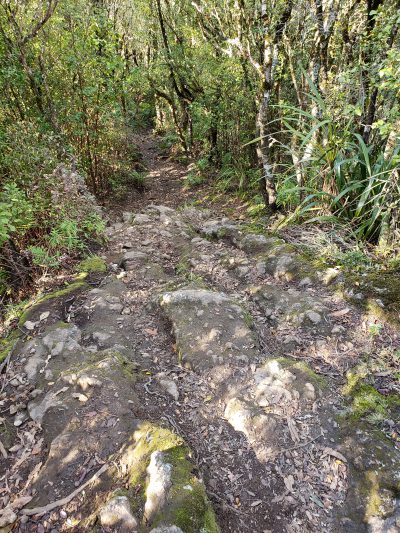 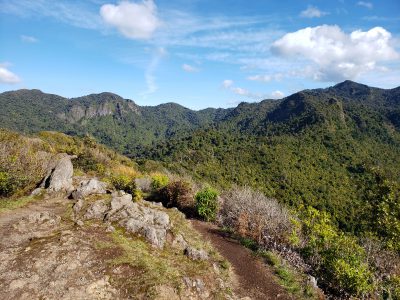 The man-made stairs on the way to the Ruapane Lookout eventually gave way to natural steps formed by tree roots, and then to rocks and boulders for the last twenty minutes of the climb. The tramp was a lot more strenuous than we had anticipated, so we were really ready for a rest when we got to the viewing platform. Looking northeast from there, we could take in the vista of the beautiful green hills surrounding the Waikato plain, dotted with cattle and sheep, and all the way to the Kaimai Range, which separates the Waikato from the Bay of Plenty. In the distance to the west, we glimpsed the shimmer of the Tasman Sea at Raglan. The view was definitely worth the effort. 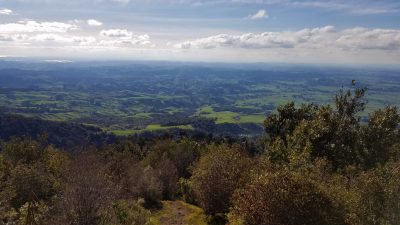 View of the Waikato plain