Ghosts: A Lesson for Halloween

Ghosts: A Lesson for Halloween 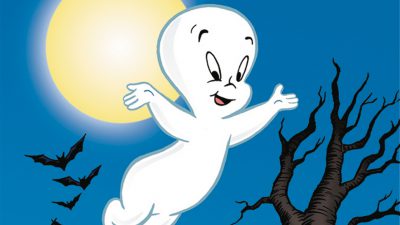 About thirty years ago when I was serving in a ward Primary presidency in Delaware, my turn to do “sharing time” came up a day or two before Halloween. I began my lesson by asking the kids to raise their hands if they believed in ghosts. Only about half of the hands went up, so then I said, “How about the Holy Ghost? Do you believe in the Holy Ghost?” The rest of the hands went up.

“So what is a ghost?” I asked. A few seconds went by before someone raised a hand and said, “A spirit.”

“That’s right,” I said. “Spirit is another name for ghost. So what is a spirit?” I asked.

Several more seconds went by before someone tentatively responded, “It’s like, what’s inside your body that makes you alive.”

One of the older girls raised her hand and said, “A spirit is what we were in heaven before we came to earth.”

“That’s right,” I said. “We were all spirits before we got our bodies. So if a spirit is just a person without a body, and a ghost is the same thing as a spirit, why do some people think ghosts are scary?”

“Because ghosts are like, dead people,” someone blurted out.

“That’s true,” I agreed. “When people die, their spirits leave their bodies, so they become ghosts. But why does that make them scary?”

No responses to that one, so I asked another question. “Are all ghosts scary?”

“That’s right,” I said. “The Holy Ghost isn’t scary at all. We’ll come back to him in a few minutes, but first let me ask, are there any other ghosts or spirits that aren’t scary?”

No response. I waited for a moment and then asked, “Do any of you have a relative or a friend who has passed away?” A few children raised their hands, so I called on one of them.

“Nicki, who do you know who has passed away?”

“My grandpa,” she replied.

“DId you know your grandpa?” I asked.

“Did you love your grandpa?”

“Do you think your grandpa loved you?” I asked.

“Do you think if your grandpa came back to visit you as a spirit, or a ghost, that you would be scared of him?”

“Because he loves me?”

“I think you’re right. It might be kind of scary at first to see a ghost because it’s not something we ever expect to see, but sometimes the spirits of people who have died do visit the living. They may come to give us special messages, or to warn us of danger, or to give us comfort—much like the Holy Ghost. President Benson told a story in general conference about a young man who was killed in a train accident. His mother was very upset and, so upset that she almost got sick. One day not long after the funeral, while she was lying in bed crying, the spirit of her son came to visit her. ‘Mother, do not mourn, do not cry. I am all right,’ he said. He explained how the accident had happened, and told her that it hadn’t been anyone’s fault; it was just an accident. ‘Tell Father that all is well with me, and I want you not to mourn any more,’ he said, and then he left. The mother still missed her son, but his spirit had brought her peace and comfort.” (See Ezra Taft Benson, “Seek the Spirit of the Lord,” April 1988, quoting David O. McKay, Gospel Ideals, Salt Lake City: Improvement Era, 1953, pp. 525–26.)

“There are lots of spirits, or ghosts, of people who love us and want to help us,” I went on, “but let me ask another question. Are there any spirits or ghosts that want to hurt us? Are there any we should be afraid of?”

“Because he didn’t get a body.”

“Because he didn’t want to follow Heavenly Father’s plan.”

“Yeah, there were a lot of spirits that followed Satan.”

“That’s right—one third of all the spirits our Heavenly Parents created. Do you think they are happy now that they made that choice?”

Several children shook their heads. “No,” they said.

“I don’t think they are, either. And because they’re not happy, they don’t want us to be happy, either. So Satan and the spirits that followed him hang around on the earth, trying to tempt us to do things that would make us unhappy. So there actually are ghosts that we should be kind of afraid of. Sometimes they are called devils, or demons.

“There’s a story in the Bible about a boy who was bothered by a demon. The demon made him act strangely, and do dangerous things. Sometimes the boy hurt himself or others because the demon had taken control of his body. The boy’s parents didn’t know how to get rid of the demon, and the situation was making all of them very unhappy. But the father had heard about Jesus. He had heard that Jesus had power to heal people, and to get rid of demons. So one day he brought the boy to Jesus. 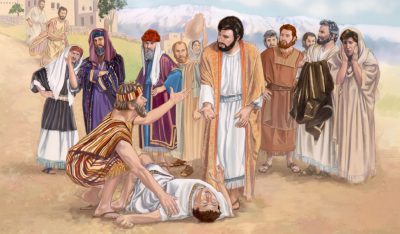 ‘Lord, have mercy on my son,’ he said. ‘He is possessed [by a demon] and suffers terribly. Often it throws him in the fire and in the water.’

Jesus said, ‘Bring him to me.’ And Jesus rebuked the demon, and it left him and the boy was healed in that same hour (Matthew 17:15, 17-18, translation by Thomas Wayment).

“Jesus then told his disciples that they, too, could get rid of demons if they prayed and fasted and had faith. So even though we know that there are demons, or ghosts, that may try to hurt us, we also know that Jesus has the power to keep us safe from them if we will pray, and maybe fast, with faith that he will help us.

“Now, Jesus isn’t on the earth anymore for us to go see him when we’re scared or sick  or hurt. So how does Jesus help us when we need help?”

“He sends the Holy Ghost.”

“That’s right. Jesus promised his disciples that even though he had to go away, he would not leave them all alone. He would ask Heavenly Father to give them “another Comforter” that would stay with them forever (John 14:16). And what’s another name for that Comforter?”

This time, all the hands went up.

“But I’m not afraid of ghosts. Are you?”

I heard a mixture of nos and yesses in response.

“I guess sometimes it’s OK to be afraid of ghosts, because there are ghosts that want to hurt us. But what can we do if we feel afraid? Who can help us?”

This time the responses were a mixture of “Jesus” and “the Holy Ghost.”

About thirty years later, I still feel the same way.