Why Denmark and Berlin? Why now?

Why Denmark and Berlin? Why now? 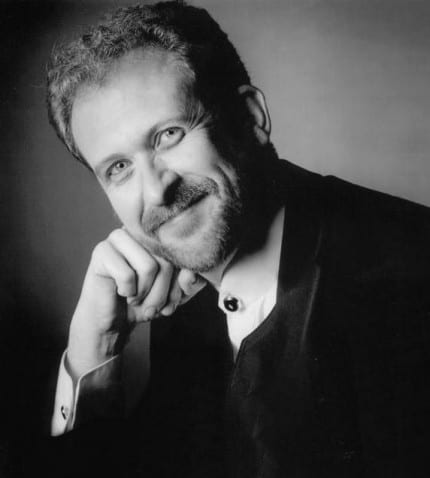 Our friend Martin Wright, one of the world’s most sought-after opera chorus masters

“You know what I’d really like to do sometime?” Michael asked Nancy one morning early in July. We were still in Colorado at Nancy’s sister’s mountain retreat, cleaning up after the family gathering where we had celebrated our fortieth wedding anniversary.

“No,” Nancy responded. “What would you really like to do sometime?”

“I’d like to go to Berlin and attend some performance that Marty is involved in.”

Marty (more properly known as Martin) is an old and dear friend. Michael met him while both were representing their respective Idaho high schools at Boys State in 1972, and they bonded over their mutual love of music (and desire to get out of Idaho as soon as possible). As freshmen at Brigham Young University, Martin, Michael, and Nancy all sang together in Oratorio Choir. Later, Michael and Martin shared an apartment and often performed with their other two roommates as a vocal quartet. 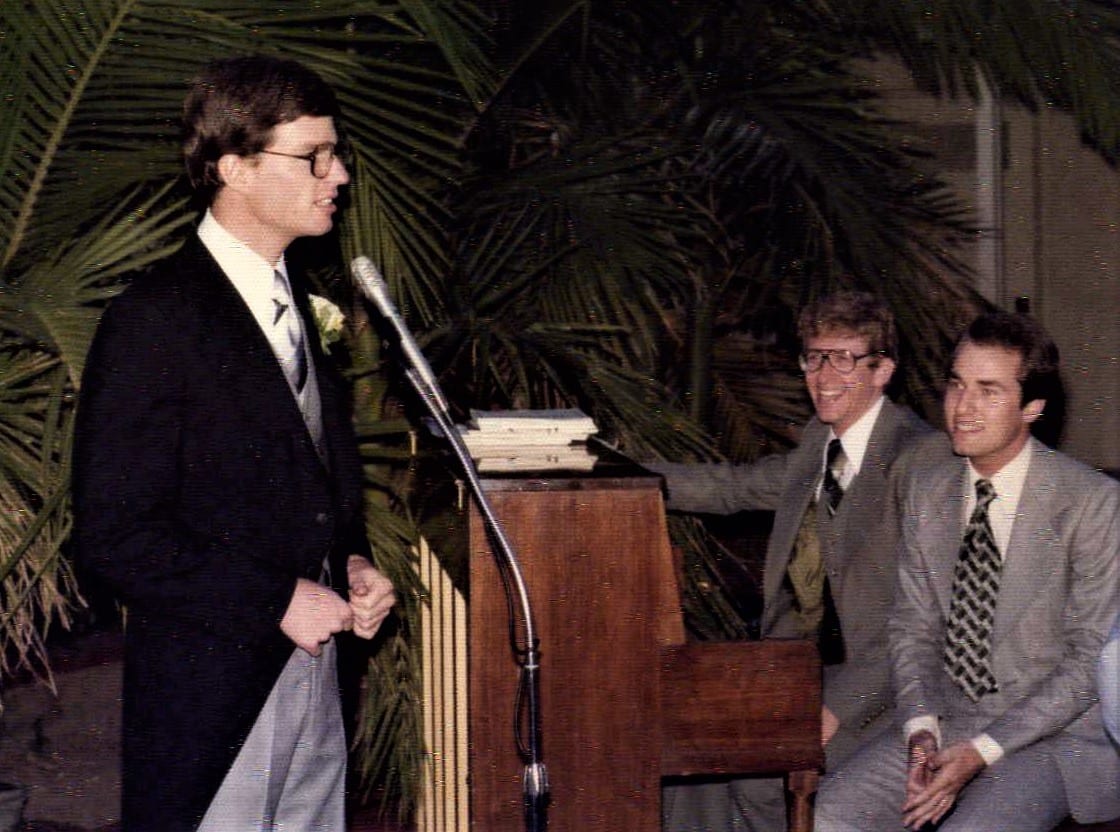 Marty (center) performed at our wedding reception in 1977. (That’s Michael at the microphone; Kim, another of Michael’s musical roommates, is at right)

An extremely talented vocalist, pianist, and choral conductor, Martin Wright began his career as an opera baritone, but he has since given up solo performance and become one of the most sought-after opera chorus masters in the world. He has worked with major opera companies around the southwestern U.S. as well as in Chicago, Shanghai, and the Netherlands; currently, he is Chorus Master of the Berlin State Opera, working under Daniel Barenboim. Although Michael and Nancy follow him on Facebook and exchange notes periodically, we haven’t seen Martin for over thirty years.

To Nancy, Michael’s desire to go to Berlin and reconnect with Marty seemed to come completely out of nowhere, but she was amenable. “Ooh, yeah! That would be really fun. Let’s do that sometime.”

“I’ll have to write and ask what he has going on in the next year or two that we might like to attend,” said Michael.

“Yeah, do that,” said Nancy. And then she put the conversation out of her mind.

Several days later, Michael said, “I just heard back from Marty. He says that the Berlin opera house has been closed for renovations for seven years …”

We had already taken a trip abroad this year. We hadn’t intended to take another one. But how could we not take advantage of this unique opportunity?

We checked our finances and decided that we could work it out if we were careful, so Michael started researching possible flights to Germany. “How long would you want to stay?” he asked Nancy.

“Well, I’ve been thinking,” she replied. “Berlin isn’t that far from Denmark. Could we add a week on one end or the other and go up there, too?”

Nancy’s great-grandparents on her mother’s side had emigrated from Denmark to Utah in the 1860s. She never met any of her Danish forebears, but she has always been proud of her Danish heritage. She grew up in a home filled with Danish-designed teak furniture. She ate from Dansk dishes, using “Royal Danish” sterling silverware. As a child, she loved visiting the Danish community of Solvang when her family headed up the California coast on vacation: The windmills. The wooden shoes. The pea soup. The pastries. Visiting the real thing has been on her bucket list since way before Jack Nicholson and Morgan Freeman popularized the term “bucket list.” 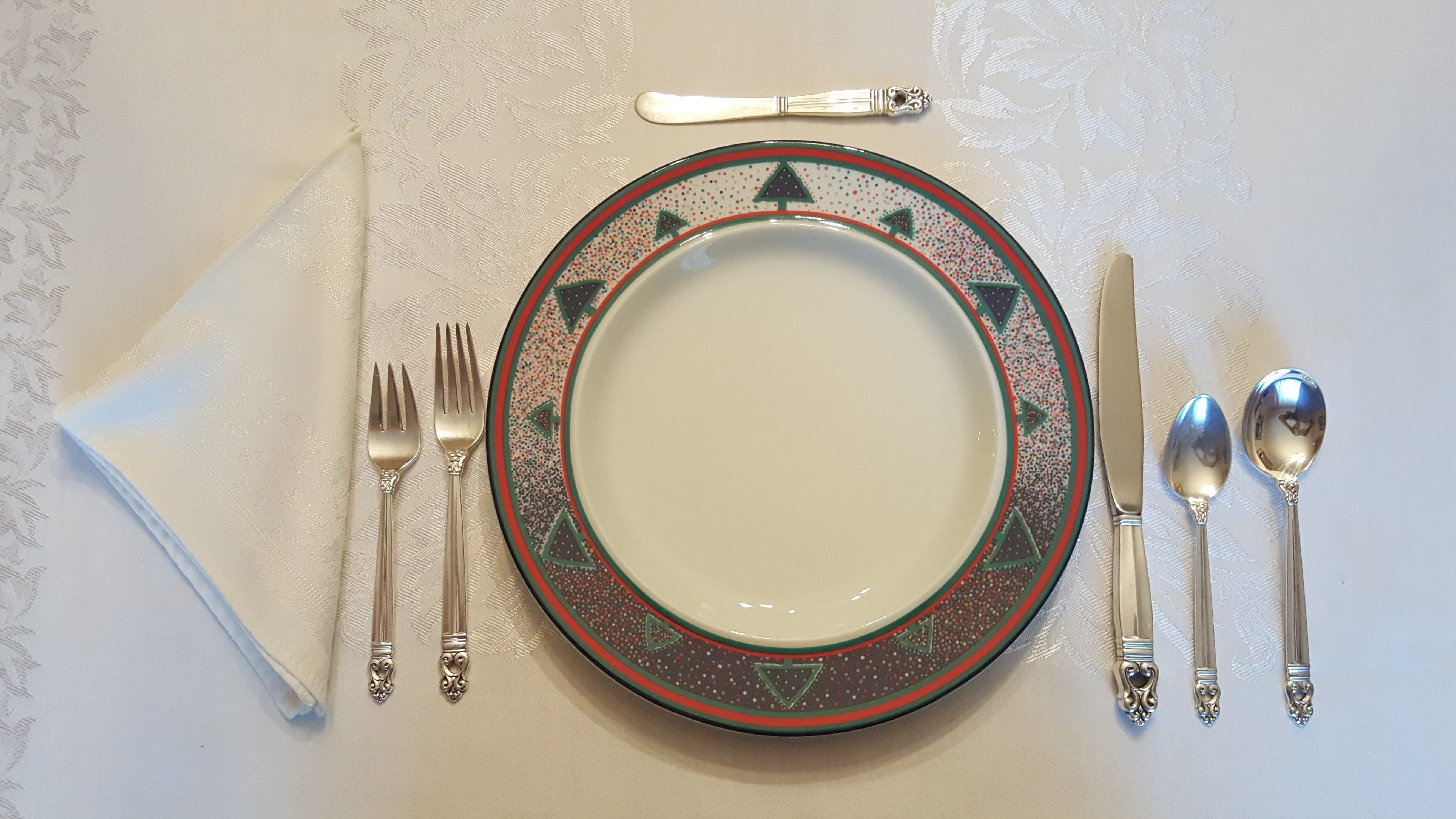 Nancy and her sisters consider “Royal Danish” sterling to be the only true silverware pattern. In addition, they all bring out their Dansk “Winterfest” dinnerware at Christmastime 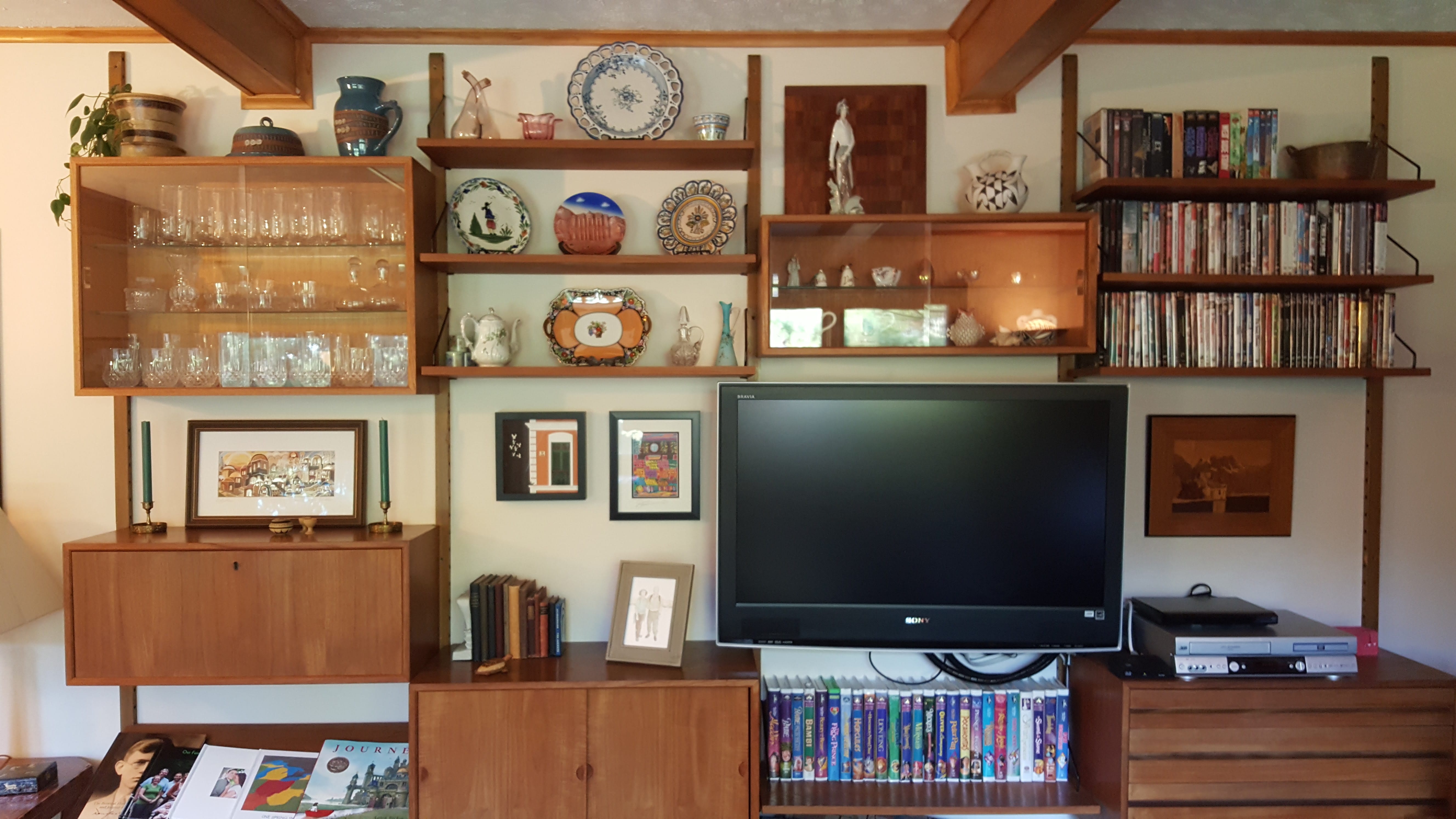 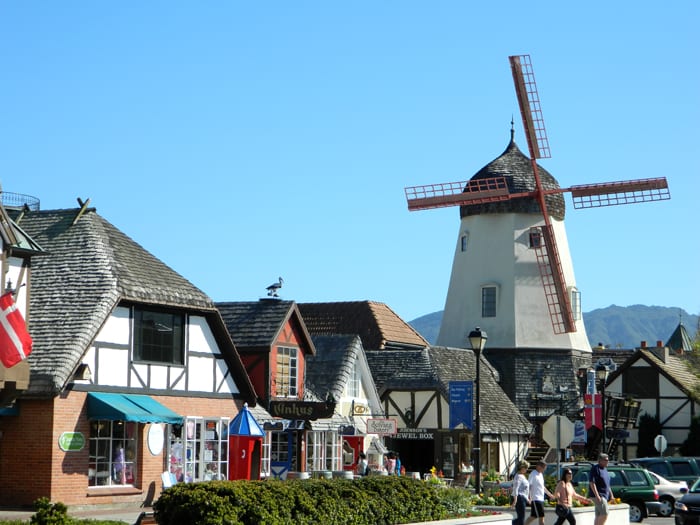 When Nancy was young, her family liked to visit Solvang, California, which sought to re-create a Danish village of the nineteenth century

Michael did more research. “The Berlin opera house opening is the second weekend of October. I think I can arrange my work schedule so we can leave on September 29th. If we fly to Hamburg, we can rent a car and drive up to Denmark for a few days, return the car, and then take the train from Hamburg to Berlin. That will give us about four days in Denmark. Is that enough to do what you want to do there?”

“Probably not,” said Nancy, “but I’ll take it anyway. We’ll just do as much as we can do in four days.”

Although both of us want to visit the “must sees” in Copenhagen and Odense, what Nancy wants most to do in Denmark is visit the villages in rural Jutland where her ancestors lived. So she has spent the past couple of months digging down into the root system of her family tree making note of every place recorded for the births, christenings, marriages, deaths, and burials of generations of Bertelsens, Benners, and Dams back into the seventeenth century. (Dig into your own roots at http://www.familysearch.org.) 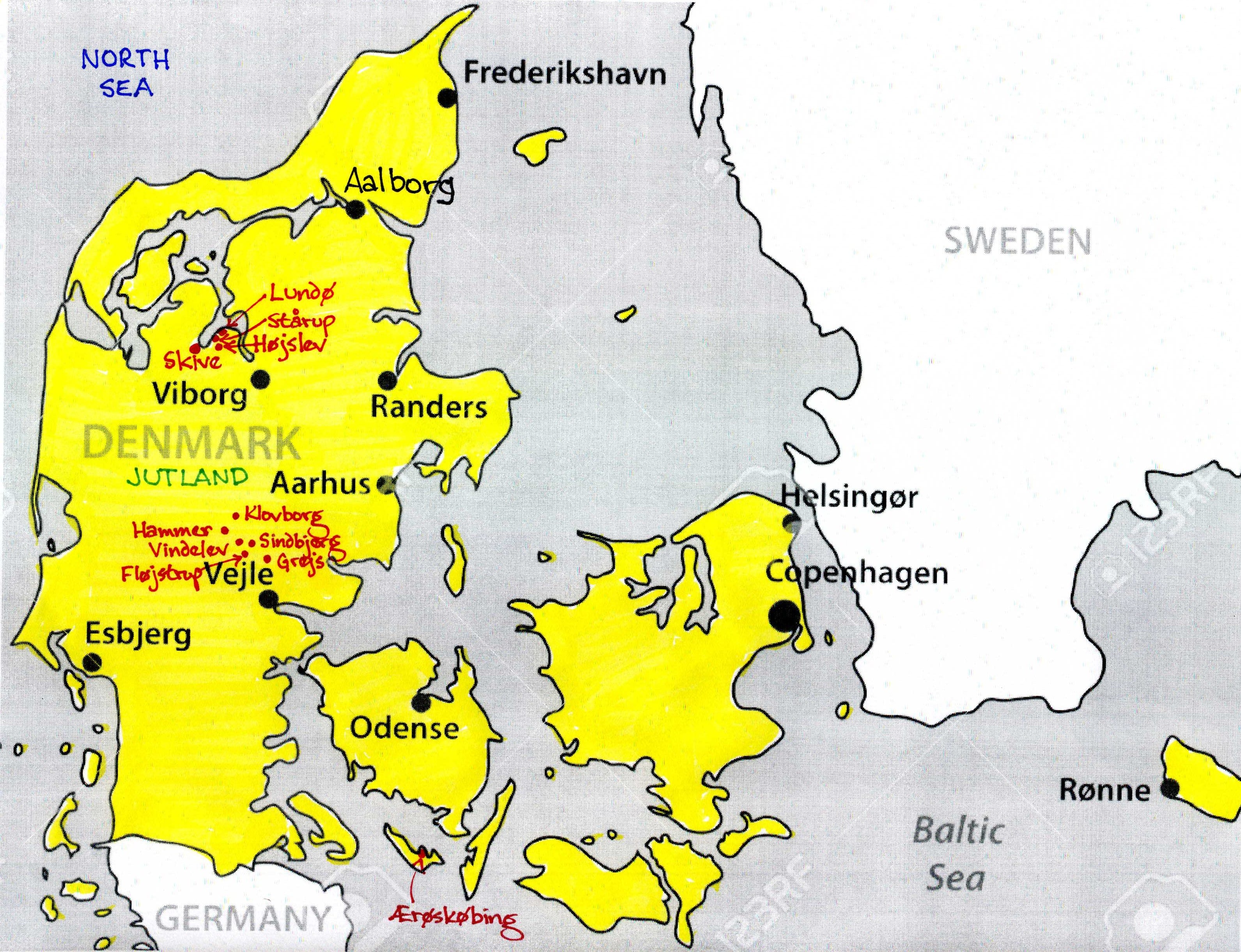 Most of these places are tiny villages, hardly more than what Nancy’s friend Kirsten–herself descended from more recent generations of Danes–refers to as “crossroads,” but anchored by parish churches that have been in continuous use for centuries. Nancy pinpointed all these hamlets on the map, and planned a route through Denmark that will take us to as many as we can visit in four days before we head to Berlin.