Up in the air again: Cincinnati to Salt Lake City

Up in the air again: Cincinnati to Salt Lake City 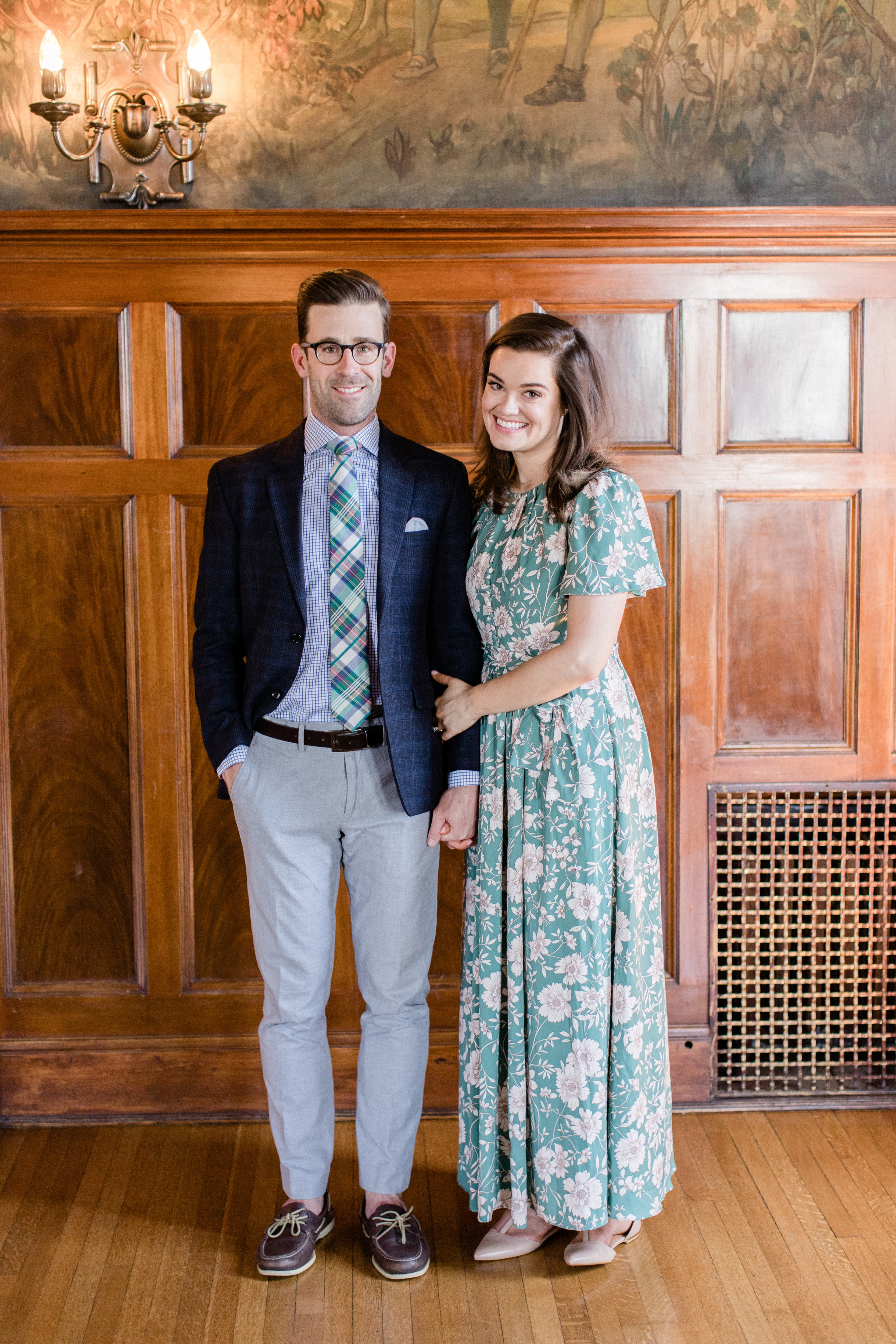 Sometime in January, our son Nat informed us that he and the woman he had been dating for over a year had decided to get married. We were thrilled, of course. He said they had not settled on a wedding date yet, but it would be sometime this summer. We reminded him that we had already booked a cruise with a group of friends and thus would be out of the country for most of June, but any time in July or August would be fine.

A few weeks later, Nancy was walking into Wal-Mart when her phone rang. It was Nat.

“Hi, Mom,” he said. “Hey, when did you say your cruise was? ʼCuz Emma and I are thinking that the best day for us to get married is Friday, June 7th.”

“Uhhh, that’s not going to work for us,” Nancy responded. “First, we have to be in Stockholm by noon on June 8th for the cruise, which we booked months ago, and already paid a hefty deposit. Plus, we’re going with a bunch of friends who have already booked and paid their deposits.”

“Well, if we get married on Friday afternoon and have the reception early that evening, you could take a red-eye and get to Stockholm by noon on Saturday, couldn’t you?”

“No, Nat.” Nancy was trying not to sound exasperated. “That would be way too iffy. With a cruise, you have to allow plenty of lead time in case your flight gets delayed, because if you’re not on the ship when the cruise departs, you’re out of luck. You literally miss the boat, and don’t get your money back. And besides, we’re planning to spend a few days in Prague before the cruise. We’ve already booked flights and hotels and everything for that, too. We leave on June 3rd.”

“So when do you get back?” Nat asked.

“I can’t remember the exact date, but I think the cruise ends on June 15th or 16th, and then Dad and I are planning to spend a few more days in Denmark and also go up to Norway for a week or so. So we’ll probably be back home around the 24th or 25th.”

“Okay,” he said, trying not to sound exasperated. “I’ll talk to Emma and get back with you.”

A week or so after that conversation, Michael got a text from Nat. It said:

“Emma and I have scheduled our wedding for Friday June 21 at the SLC Temple.”

In the exchange that followed, Nat explained that, based on their work schedules, 21 June was the best time for both him and Emma, as well as for her parents. Could we come back to the States and get to Salt Lake City by 21 June?

This is why we had to prepare to get back on a plane only sixteen hours after getting home last night.

This morning we woke at 6:00 a.m., feeling only a little disoriented. Michael made a quick trip to Kroger to pick up just enough milk and orange juice to satisfy our breakfast needs while Nancy sorted dirty clothes and put the first load in the washing machine. Mark was still asleep when we sat down to eat our bran flakes and granola, but Lynn joined us. Normally, we would serve something better than cold cereal to our guests, but today was not normal.

Mark and Lynn hugged us goodbye before they left to fetch their RV, while we folded clean laundry and repacked our luggage. While we were away, Nancy had received notice that a book she had ordered from Amazon to be sent to our granddaughter Emily as a birthday gift had been damaged in transit; therefore, it had been returned to the sender and the order had been cancelled. Rather than reorder, Nancy decided to go over to Barnes & Noble and pick up a copy of the book (Misty of Chincoteague) to take with us, because we will be seeing our horse-obsessed granddaughter before her birthday on Monday. 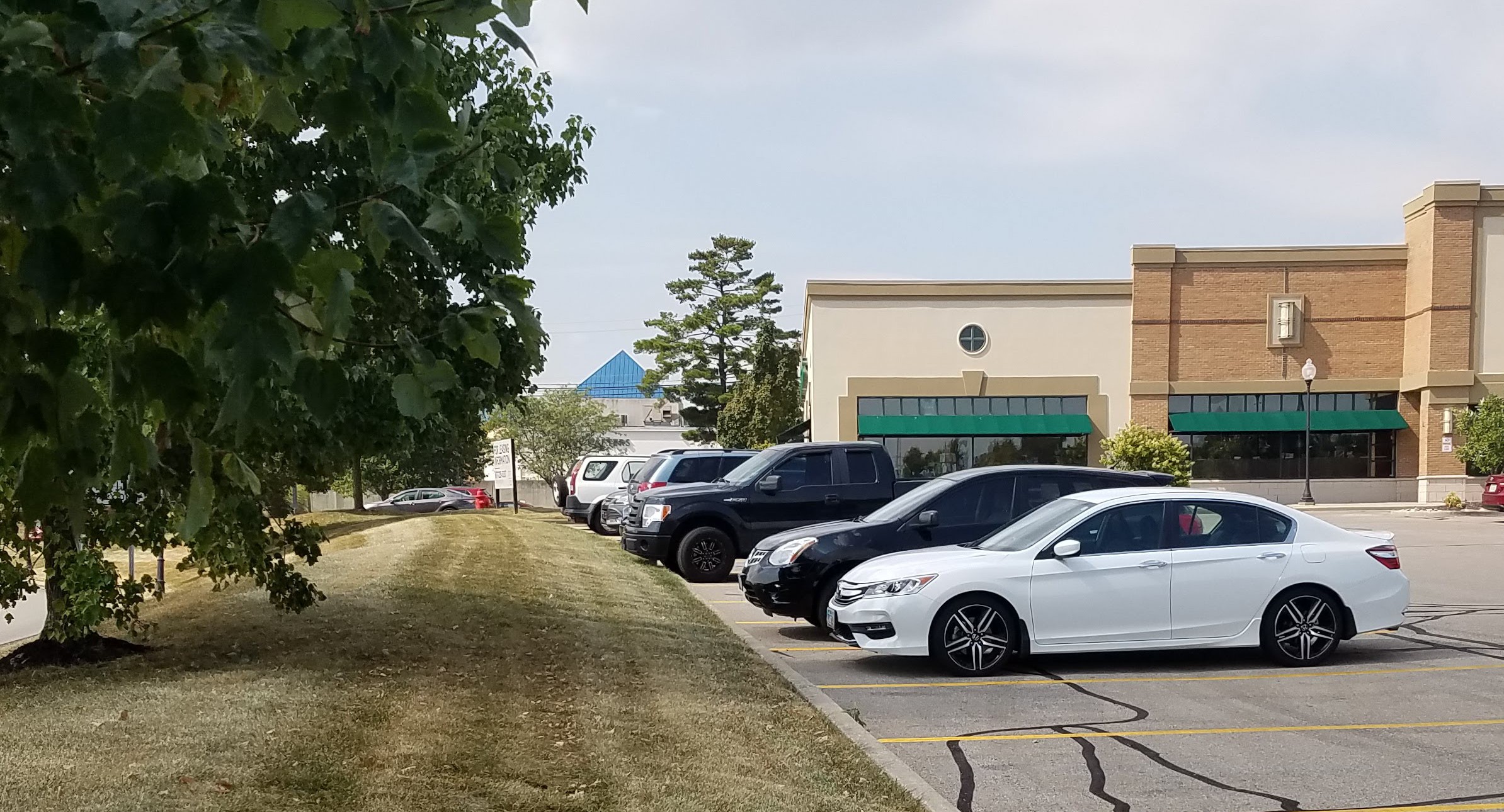 The grassy berm where Nancy rolled her ankle

Michael needed to go to the bank, so we decided to combine our errands with a trip to Chick-fil-A, there being nothing at home to eat for lunch. About 11:45 a.m., Michael dropped Nancy off at B&N to get the book while he went to the bank, and then returned about fifteen minutes later to pick her up. Nancy saw him coming from across the parking lot and ran to meet him, but as she was crossing the grassy median, her right foot came down in a hidden hole and caused her ankle to roll.

“Ouch, that hurt,” she said aloud, but then she continued across the pavement, got in the car, and didn’t think anything more about it.

When we arrived at Chick-fil-A and realized that (a) there was no place to park and (b) the wait time inside would probably be more than twenty minutes, we decided to go instead to the Wendy’s down the street, where we were the only customers. We finished our chicken sandwiches and salads and then hurried home to finish packing.

A little after 3:00, we left for the airport. While we were waiting at the gate we could see big, dark clouds moving in. Soon thunderclaps announced the arrival of a storm, and a voice in the terminal announced that our flight would be delayed about 20 minutes until the storm passed—not too bad. As boarding time approached, Nancy decided that it was time to go use the restroom and stood up. 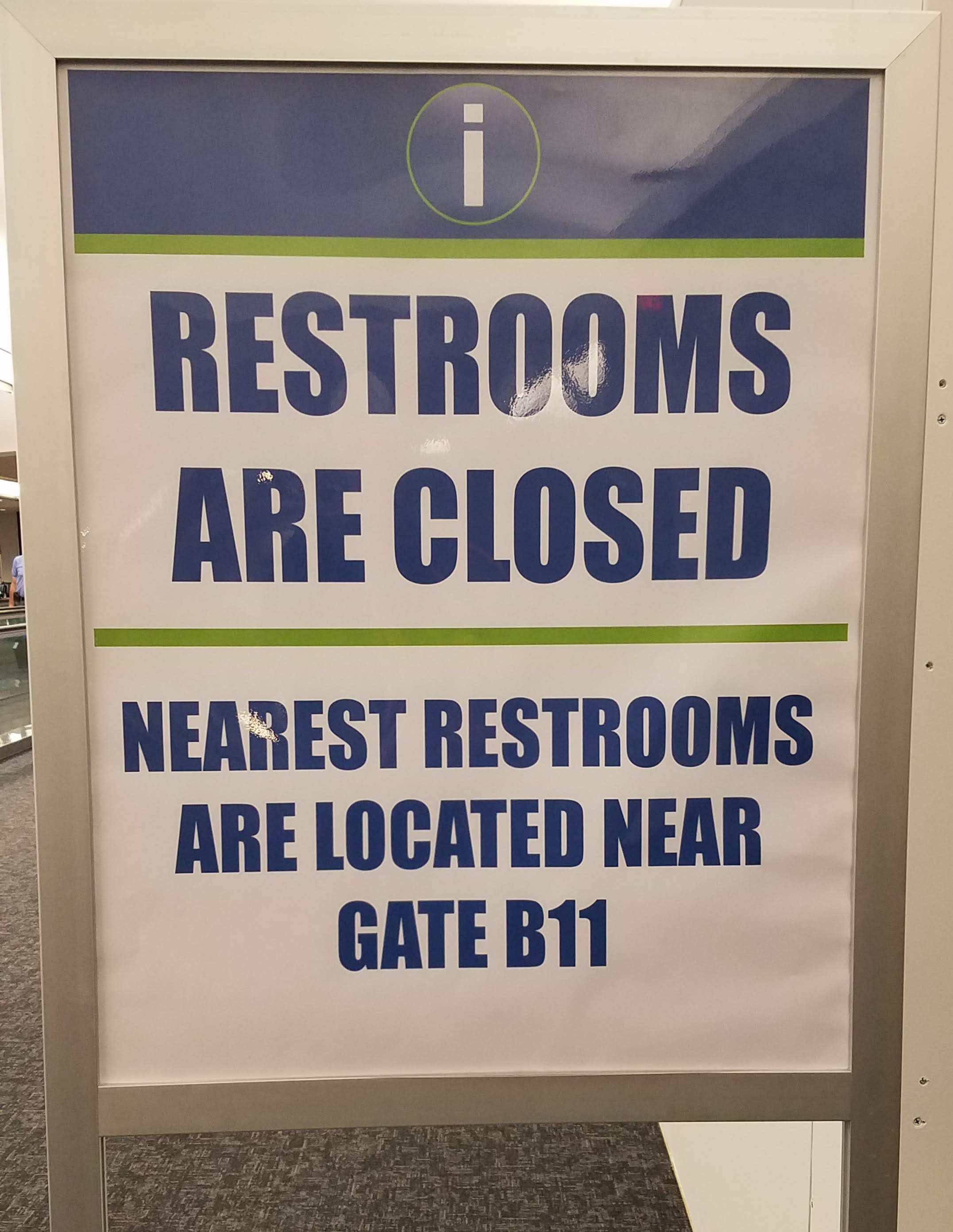 Ouch! This time she didn’t say it aloud, but the moment she put weight on her right foot she knew she was in trouble. Sure enough, the ankle she had rolled earlier today was now swollen and very sore—so sore that she knew she would not be able to walk all the way to the restroom without some assistance. The problem was compounded not only by the fact that she would need to get back to the gate within ten minutes so she could board the flight, but also by the fact that the nearest restroom was closed for remodeling, and the other one was at the other end of the concourse.

“What can I do to help?” asked Michael when Nancy explained her predicament.

“Go up to the desk and ask if I can engage that skycap with the wheelchair who has been hanging around at the gate to take me to the restroom, and then ask where to find a first-aid station and get me an ice pack.” 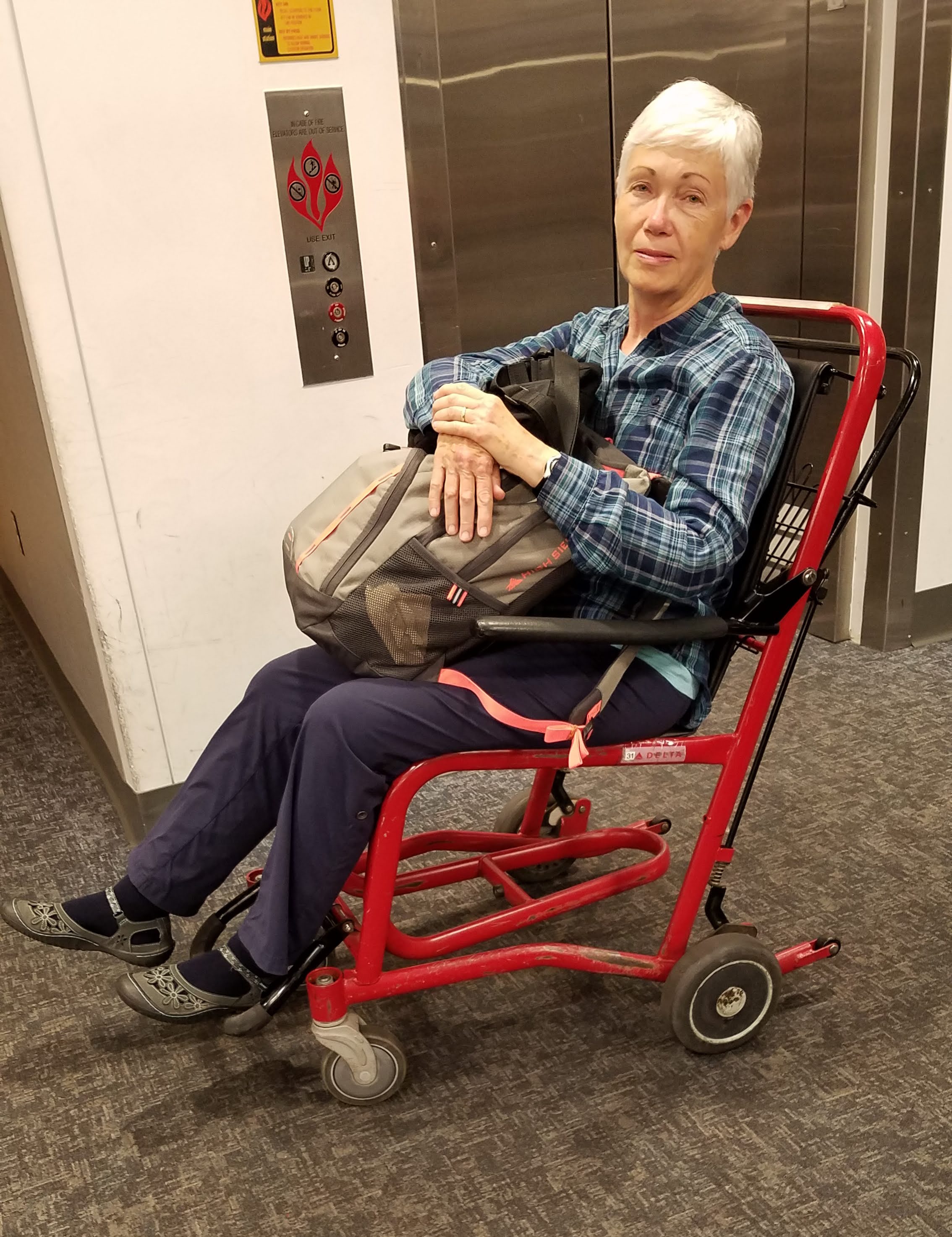 Nancy’s method of transportation within the airport

So Nancy got the skycap to take her to the restroom, while Michael ran off to find an ice pack. Travelers, beware: If you become disabled and need an ice pack while at the Cincinnati-Northern Kentucky Airport, and you do not have time to wait for the off-site paramedics to arrive with one, you will have to go to Gold Star Chili (or whichever fast-food place has the shortest line) and ask if someone will please shovel some ice into a plastic bag for you.

As it turned out, we didn’t need to fret over missing the plane because thunderstorms continued to roll through, keeping us on the ground for another hour. Nancy sat in the wheelchair (which had been intended for an arriving passenger on a plane that had yet to land) until it was time to board, and then Michael helped her awkwardly manoeuvre into her seat. During the four-hour flight to Salt Lake City, she did the best she could to keep her foot elevated and the makeshift, half-melted ice bag where it would do at least a little good while she watched Mary Queen of Scots and Michael took a nap. 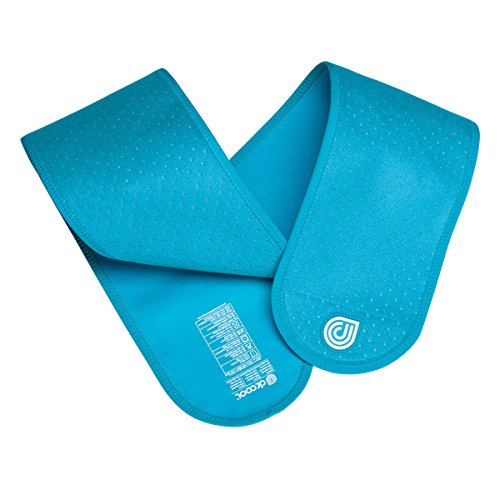 Ed & Lisa’s ice wrap was similar to this

We got wheelchair assistance again after we landed in Salt Lake City about 9:30 p.m. Nancy kept an eye on the luggage while Michael went to get the rental car, an electric-blue Jeep. Before we left Cincinnati, Michael had sent a text to our daughter Hillary (who lives in Salt Lake) asking if she could find someone who had a pair of crutches that Nancy could borrow for a few days. She and Jake happened to have a pair in their own storeroom that Jake’s mother had used when she had foot surgery a few years ago, so we made a brief stop at their house to pick them up. We didn’t stay there tonight because our son Soren and his family will be arriving from Philadelphia about 11:30 p.m., and they plan to occupy Hillary and Jake’s guest room until they can get into the house they’ve rented through AirB&B tomorrow.

So tonight we are staying with Ed and Lisa, who left us in Copenhagen only a few days ago, and who happen to live only ten minutes from Hillary and Jake here in Salt Lake. Still jet-lagged themselves and needing to leave for work early tomorrow morning, Ed and Lisa had already gone to bed when we arrived, but they left signs directing us to trundle beds in the basement guest room. They also left a soft ankle wrap with a sleeve designed to hold a pliable gel pack—two of which were chilling in the freezer. Nothing could have been more appreciated!