This morning we woke up when we woke up, which was about 7:00 a.m. We are grateful that our bodies are allowing us hours of sleep and wakefulness that aren’t too far out of alignment with what’s appropriate for the Mountain Time Zone. Lisa and Ed had already left, so we showered and dressed and went over to Hillary’s, where the box of bran flakes we had only half consumed when we were there in April was waiting for us. (Bran flakes are low on the list of cereals Hillary’s family will eat.) 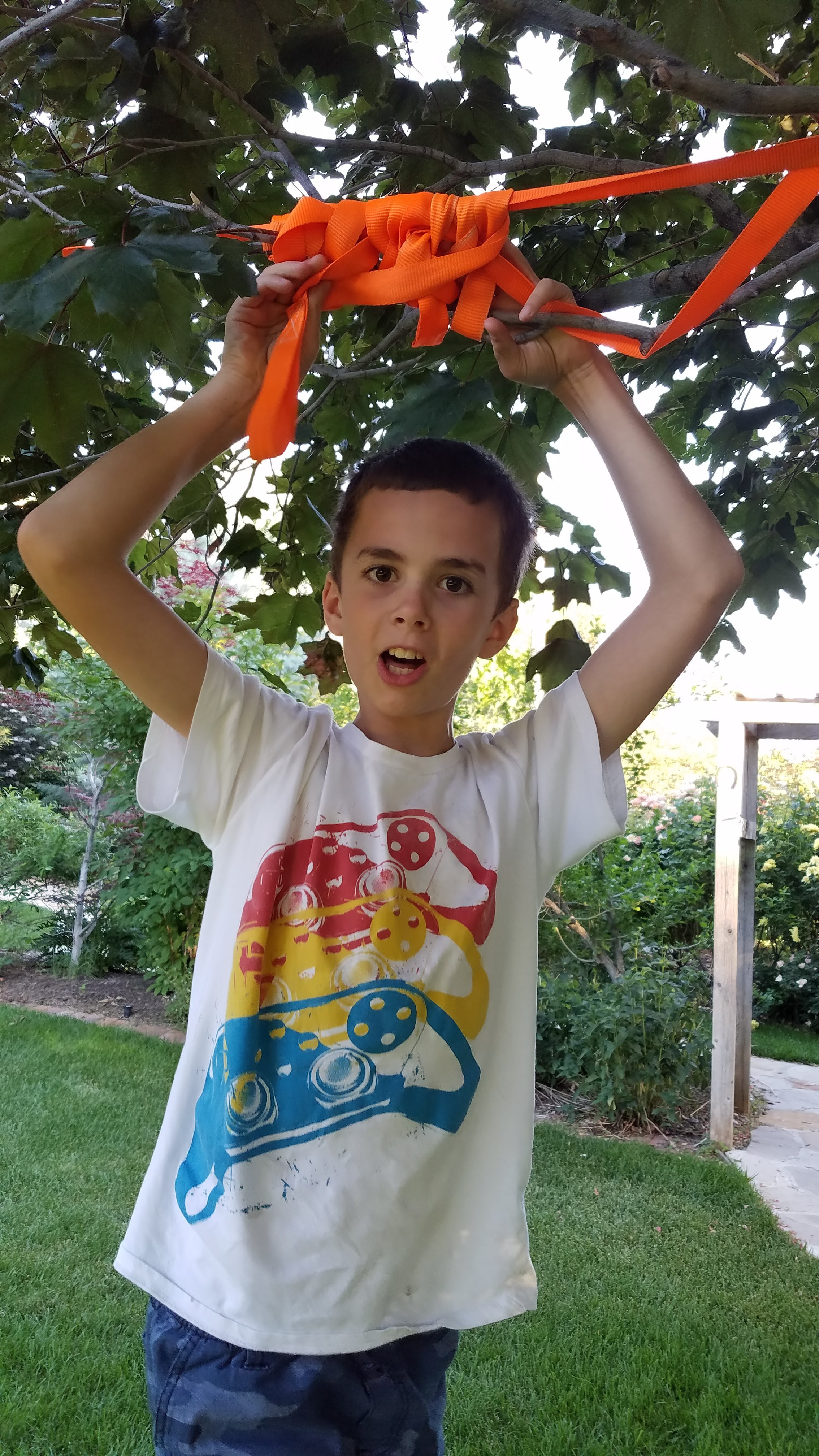 Eight of our ten grandchildren greeted us when we walked through the front door. Because three of those were visiting from the Eastern Time Zone, they had arisen very early and awakened the others, so attitudes on display represented a range of points along the cheerful-to-grumpy spectrum—but everyone except the too-old-for-hugs ten-year-old was eager to embrace Nana and Grandpa. Nana had to explain why she was using crutches and asked everyone to try to avoid running into her, or jumping onto her leg when she was sitting down. And no, she could not play horses today. 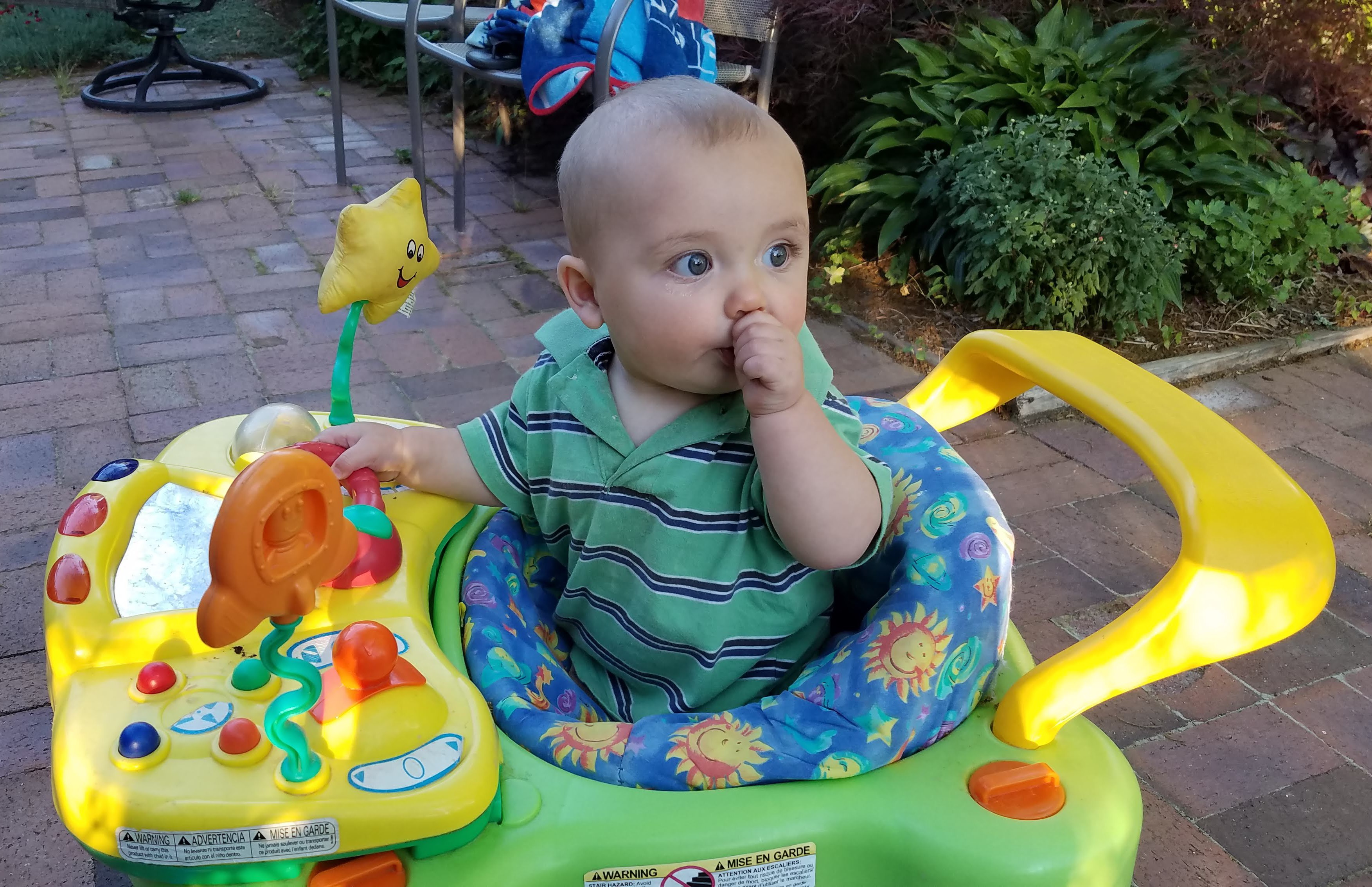 Actually, Nancy’s ankle was considerably improved after a night of icing and elevation. It was still somewhat swollen, but not too painful. This injury appears to be exactly the same as one she incurred on the same foot a few years ago, when she slipped over the edge of a parking lot pothole while carrying a big package that blocked her view of the ground. At that time, an x-ray determined that nothing was broken, and after a few days on crutches, she was fine. Today she is again thankful for crutches, which not only help her keep weight off her foot while she moves, but serve as a reminder to the kids to treat her gently. Hopefully, she won’t be on them for long. 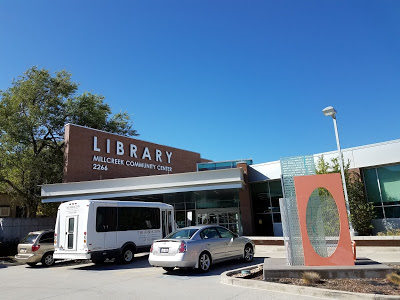 The local library was presenting a puppet show at 10:30, so Hillary had suggested that we pack a picnic, watch the show, and then eat lunch at the playground behind the library. Cormac and Daphne had piano lessons until 10:30, so Hillary would take them and then meet the rest of us at the library. Thus, about 10:20, Michael, Nancy, Soren, and Amanda (Soren’s wife), herded the kids out to the cars, made sure everyone was buckled into their carseats, and drove to the library. We arrived a little late, so the show had already begun when we entered the crowded room through the back doors. Nancy was about to direct the little kids to go sit on the floor in front when a nice woman sitting next to an empty chair in the second row from the back reached out and beckoned to them. Nancy was a little surprised when Farrah, one of Hillary’s girls, climbed onto the woman’s lap.

“Must be a family friend,” Nancy thought. It wasn’t until the woman turned around again a few minutes later that Nancy had the startling realization that the woman was our daughter Stella. She and her family also had arrived in Salt Lake last night, and were staying at a friend’s house on the other side of the city.

The puppet show featured an androgynous child named Toby, who managed to outsmart the evil pirate and unlock the treasure chest where the pirate had imprisoned a lovely mermaid (whose name was Treasure—haha). The show held the children’s attention for about 40 minutes and even kept the parents from checking their phones too often. When it was over, we followed our grandkids outside to the playground. Nancy situated herself on the sidelines where she could watch the action but keep her leg safe from marauding children. Michael helped Hillary carry the food from the car, but then the two of us left because we had a lunch date at the Garden Restaurant in the Joseph Smith Memorial Building downtown. 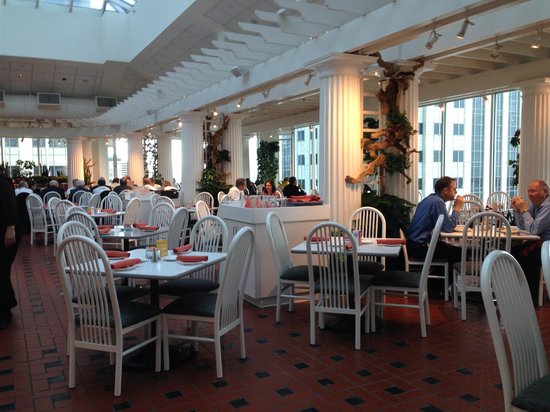 Our children who live in Salt Lake know that when we come to visit them, we may not be around at lunchtime because we like to arrange lunch dates with old friends who also live in the area. What our kids didn’t know—because we hadn’t told them yet—was that today we were not meeting old friends, but two representatives from the Church History Department of the Church of Jesus Christ of Latter-day Saints. They had asked to meet us while we were in Utah this week so they could assess whether we would be a good fit for a missionary assignment at the Matthew Cowley Pacific Church History Centre in Hamilton, New Zealand. Details about what happened at that meeting will have to wait for another time; suffice it to say that we had a productive conversation and a pleasant lunch at a table overlooking the Salt Lake Temple, where Nat and Emma will be married tomorrow. 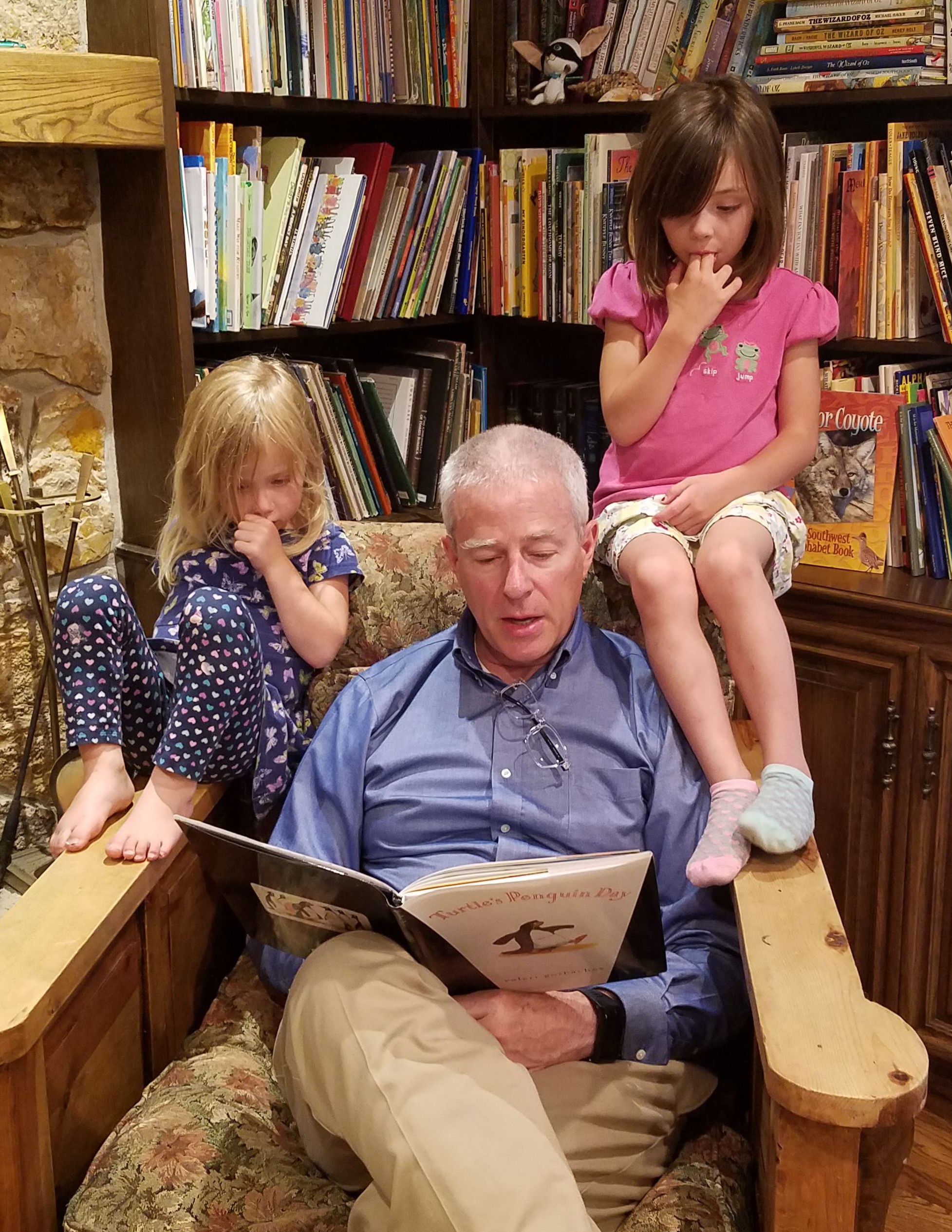 Grandpa on duty in “the reading chair 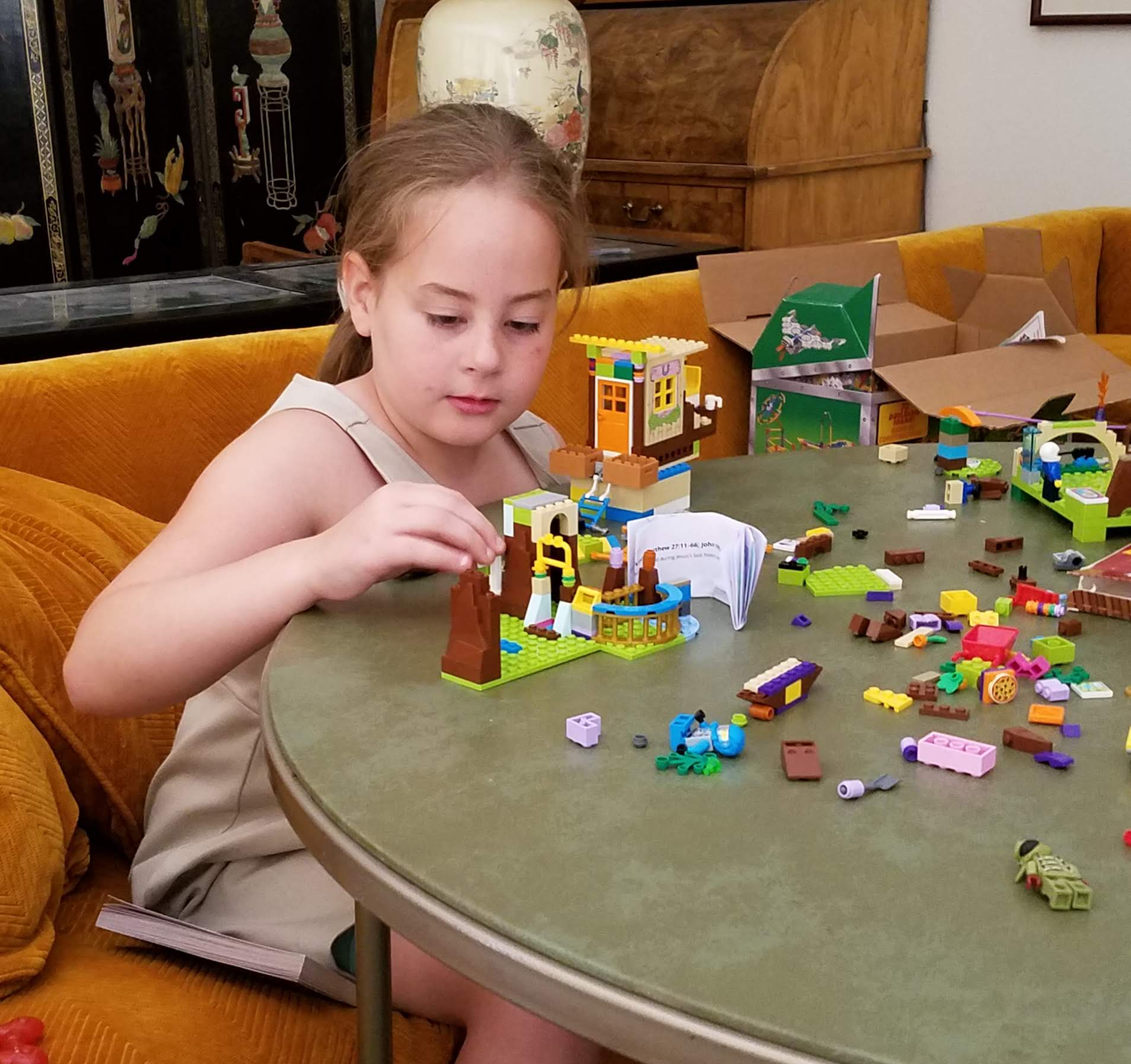 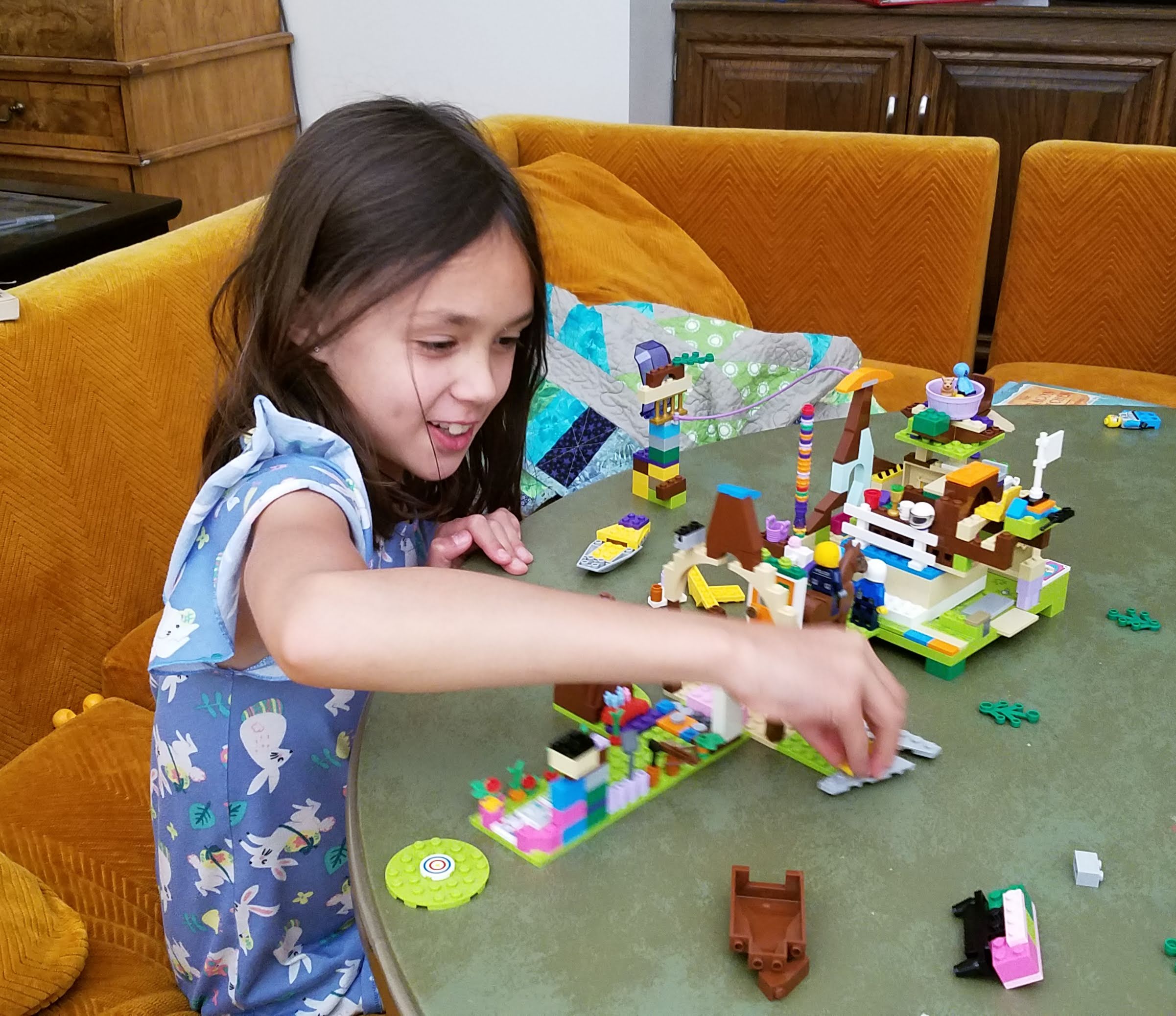 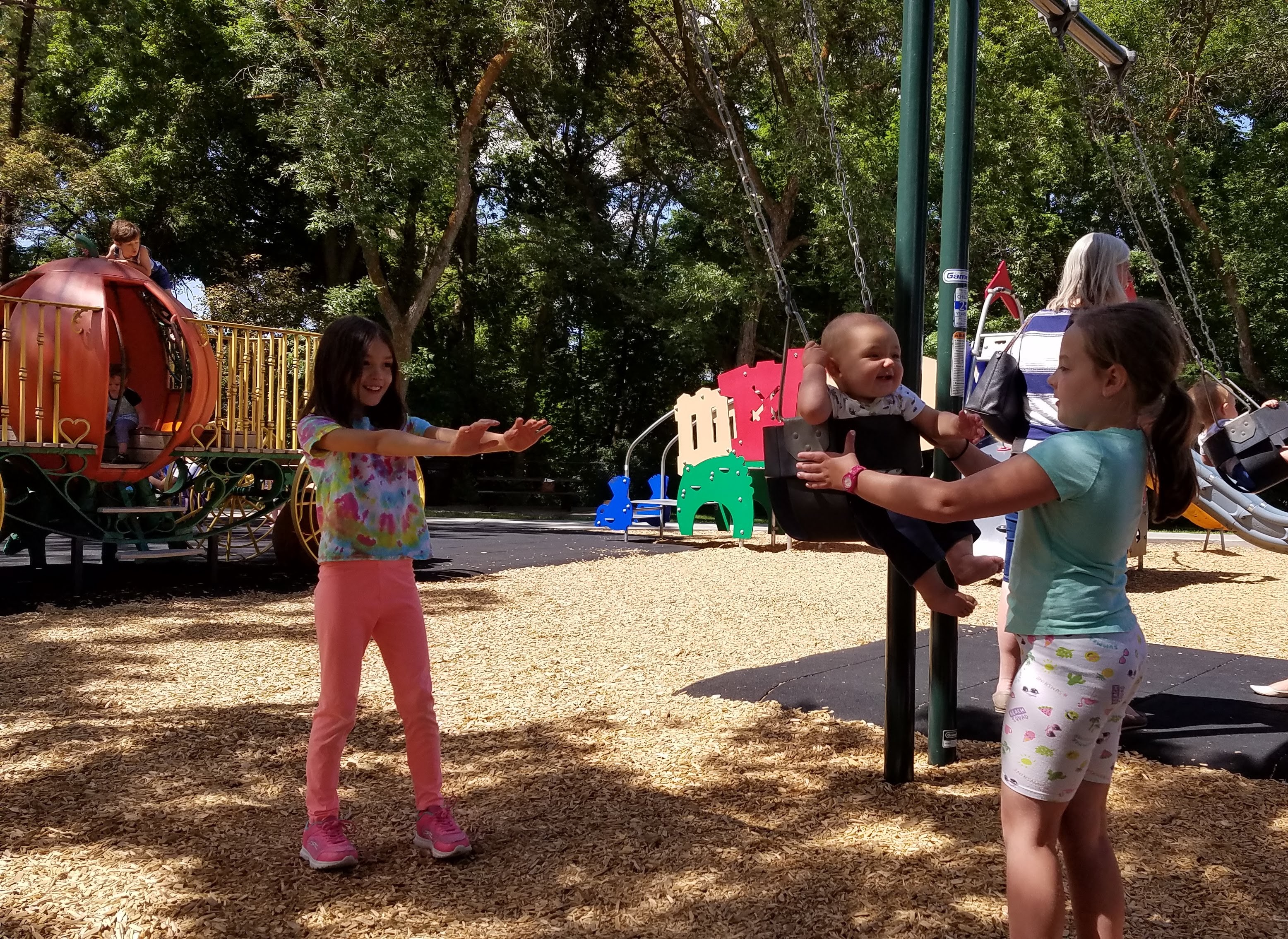 Cousins cooperating at the park

We spent the rest of the afternoon playing games and reading books with our grandchildren.

Tonight, we hosted a “meet and greet” dinner for the families of the bride and groom. (Adults only; we ordered pizza and left all the kids in the care of a couple of teenage babysitters.) The dinner was held at Communal, a farm-to-table restaurant in downtown Provo, about 45 miles south of Salt Lake City. We had dined there a couple of times previously to celebrate family members’ graduations, so Michael had contacted the manager several months ago to reserve a table for eighteen and plan a menu.

Our table at Communal

The meal began with assorted charcuterie, cheeses, and crostini served from a table in the restaurant’s smaller dining room, where we could move around and have a chance to talk with everyone. We were eager for the opportunity to become acquainted with Emma’s family, because this was the first time that any of us besides the bride and groom had met anyone from the other family. We then took seats at the long “communal” table in the main dining room, where a variety of dishes were served family-style to encourage sharing.

Nat and Emma had chosen the evening’s menu, which included a salad of baby greens with honey vinaigrette and candied pecans, “funeral potatoes” croquettes with cheddar mornay sauce, honey-garlic roasted chicken, Wagyu beef flank steak, polenta cakes, charred snow peas, and roasted broccolini, accompanied by lavender lemonade. Dessert was panna cotta with crème fraiche and roasted strawberries. Everything was delicious, but we all seemed to agree that the funeral potatoes croquettes were the evening’s standout dish.

We really enjoyed talking with Emma’s parents, Kimberly and Russ, who expressed as much gratitude and joy that our children had found each other and decided to marry as we feel ourselves.