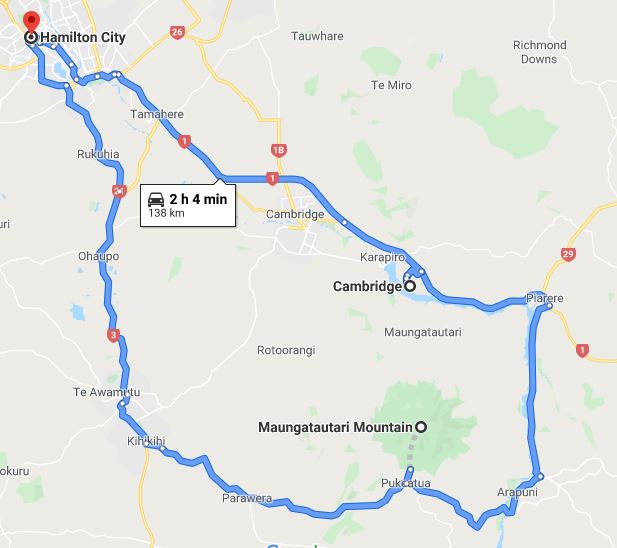 Since we had had such a great experience six years ago at the island bird sanctuary of Tiritiri Matangi, which is north of Auckland, we were excited to visit the Maungatautari Ecological Island Trust, a sanctuary for wildlife and plants less than an hour southeast of Hamilton. 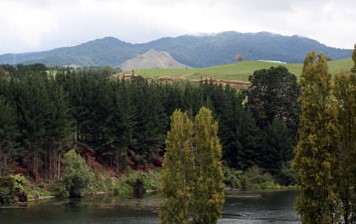 Maungatautari (Sanctuary Mountain) has been regarded as a nature preserve since 1912, but in 2001 a trust was established to protect the area’s ecosystem by installing a pest-proof barrier. The result is the largest such protected preserve in the world. A 28-mile-long fence encloses 13 square miles of native bush and wetlands, along with the wildlife that thrives in those environments.

Before humans came to these islands, New Zealand had no land mammals other than bats to prey on its unique array of birds, lizards, fish, frogs, and insects. Unfortunately, the people who began arriving in the thirteenth century brought a variety of predators with them—some intentionally, some not. Early Maori settlers brought dogs (intentionally) and rats (unintentionally). European explorers, beginning with Captain James Cook in 1769, and the colonists who soon followed introduced all kinds of “exotic” animals to New Zealand, beginning with more rodents—and the cats kept aboard ships to control them. They brought cows, pigs, and sheep to provide the kind of food and clothing Europeans were accustomed to, and deer and rabbits to provide sportsmen with game. Goats were brought in to help control the gorse and wild berry bushes that encroached on cropland, but many went wild and eventually became as hard to control as the unwanted brush. When the imported rabbits began ruining the settlers’ gardens and proliferating faster than the hunters could take them down, weasels and stoats were brought in—which then began decimating the native bird population. Red possums were introduced from Australia in an effort to establish a local fur industry, but they multiplied as rapidly as the rabbits, putting further pressure on the habitat of native species. Even “harmless” animals like cows, sheep, pigs, and deer were either over-grazing or rooting up grasslands and bush. And we haven’t even mentioned the alien fungi, bacteria, and viruses that have wreaked havoc on New Zealand’s natural ecosystems.

When New Zealand’s naturalists began sounding alarms in the mid-twentieth century, Kiwis began a concerted effort to preserve their country’s unique flora and fauna. Today, nearly 30 percent of New Zealand’s total land area is publicly owned and administered by the Department of Conservation (which, as the name implies, is more dedicated to conserving public lands than exploiting them—in contrast with the U.S. Department of the Interior under the current administration). In addition, there are a number of privately held reserves where native plants and wildlife are protected, and where efforts are underway to eliminate as many alien pests as possible. 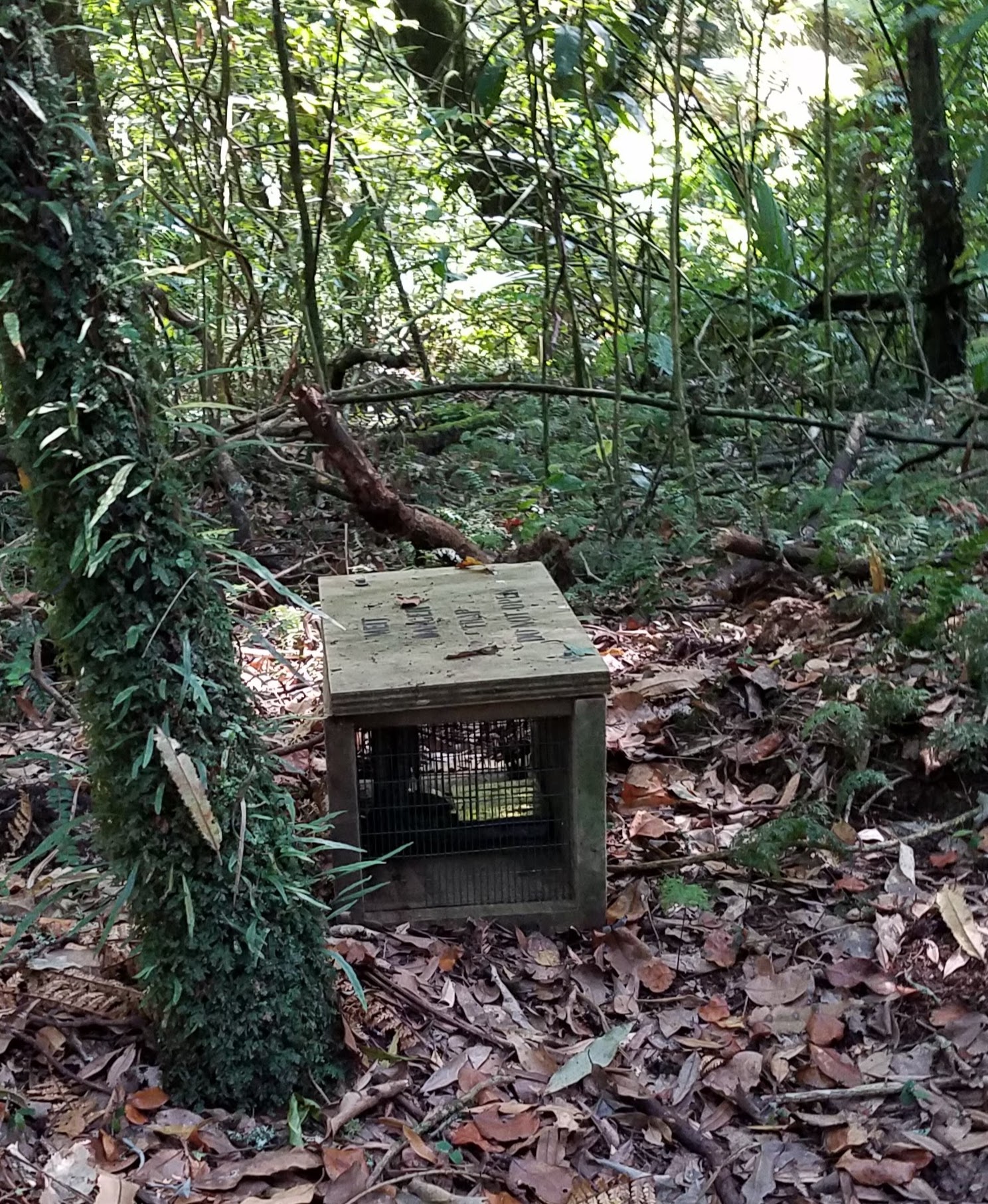 A trap for weasels, stoats, and possums

At Maungatautari, the pest-proof fence is keeping predators out, but because invasive species could not be entirely eliminated before the fence began to go up in 2001, the sanctuary still is not completely predator-free. Traps and poison-bait stations for rats, weasels, possums, and the like are placed strategically throughout the enclosure. The goal is to destroy any remaining pests within all of New Zealand’s enclosed preserves by 2050. 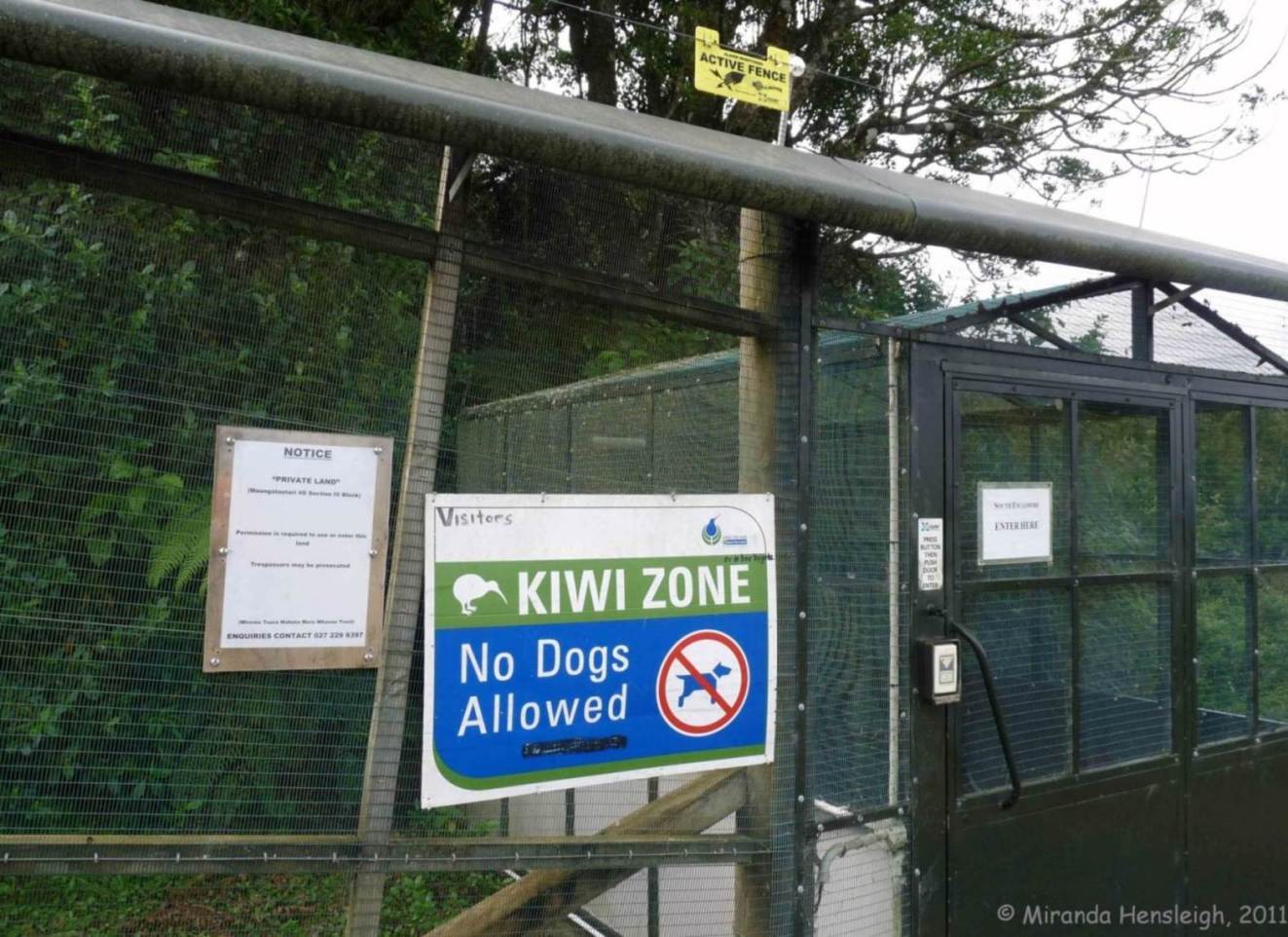 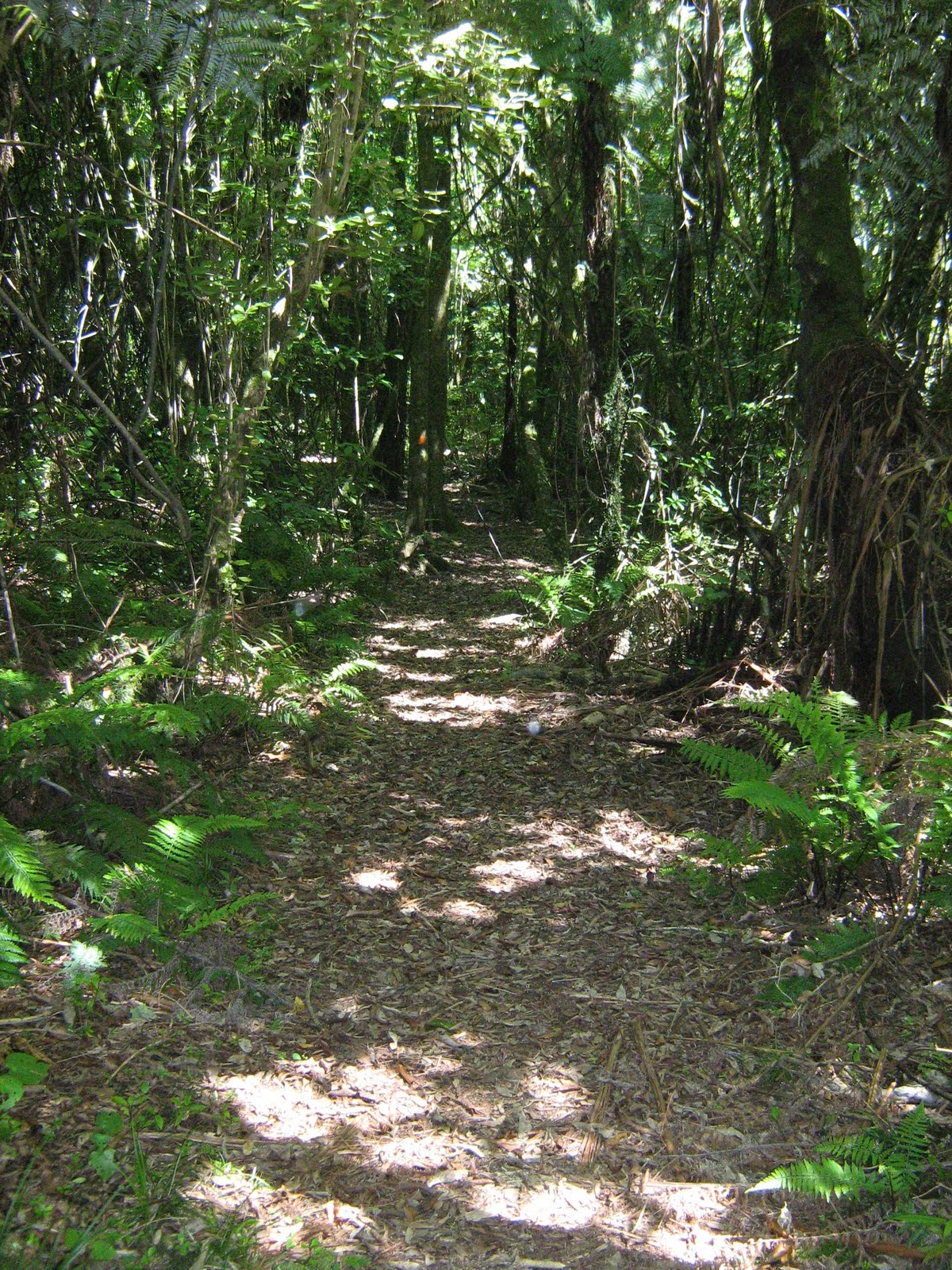 Path through the bush

When we paid for admission to Maungatautari, we were issued magnetic keycards that allowed us to pass through a double gate at the entrance. As at the cold-storage archive at the Church History Library in Salt Lake City, we had to make sure the first gate was latched behind us before we opened the second one (but here we didn’t need down jackets). Once inside the enclosure, we enjoyed a pleasant 90-minute walk through the forest, which was filled with birdsong. 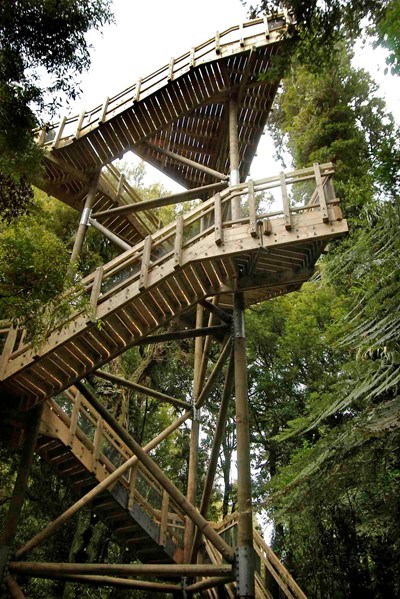 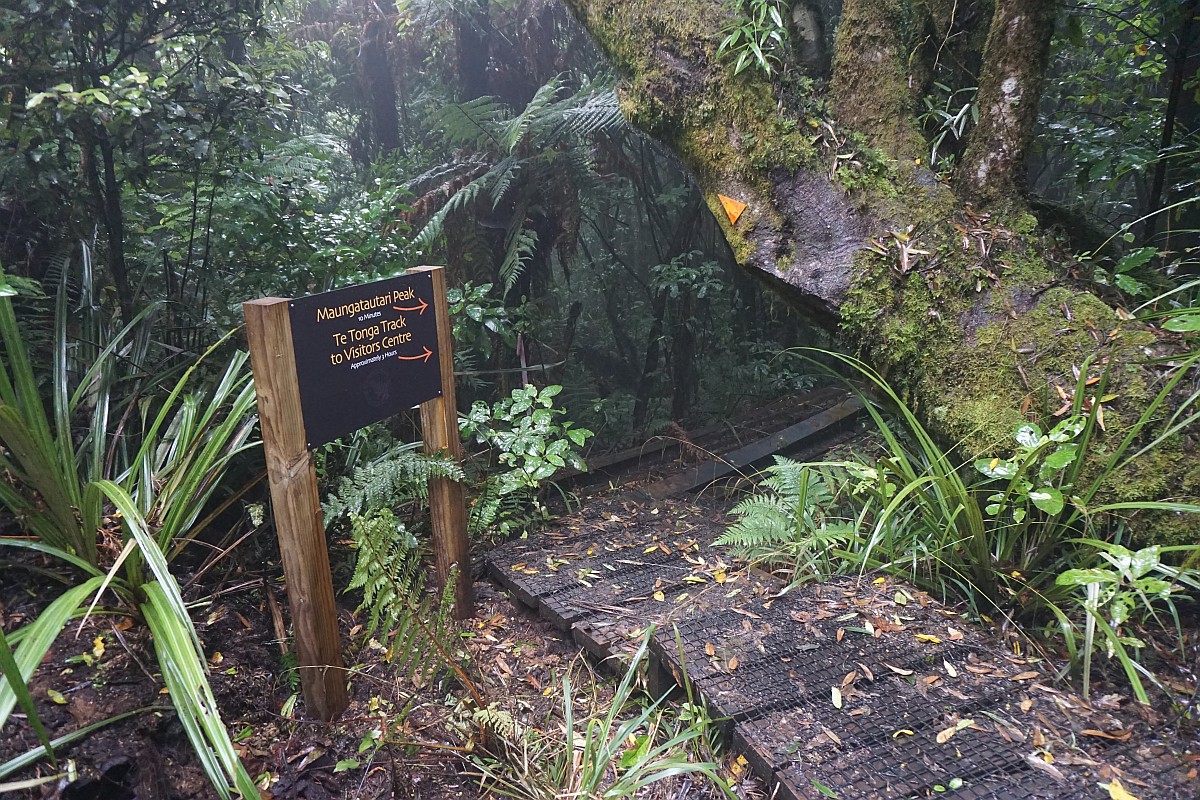 Improved trail through the bush

Curiously, we did not see many birds, even from the 52-foot observation tower that allowed us into the treetop canopy, but we are confident that many endangered species are finding refuge in Maungatautari even though we did not encounter any. 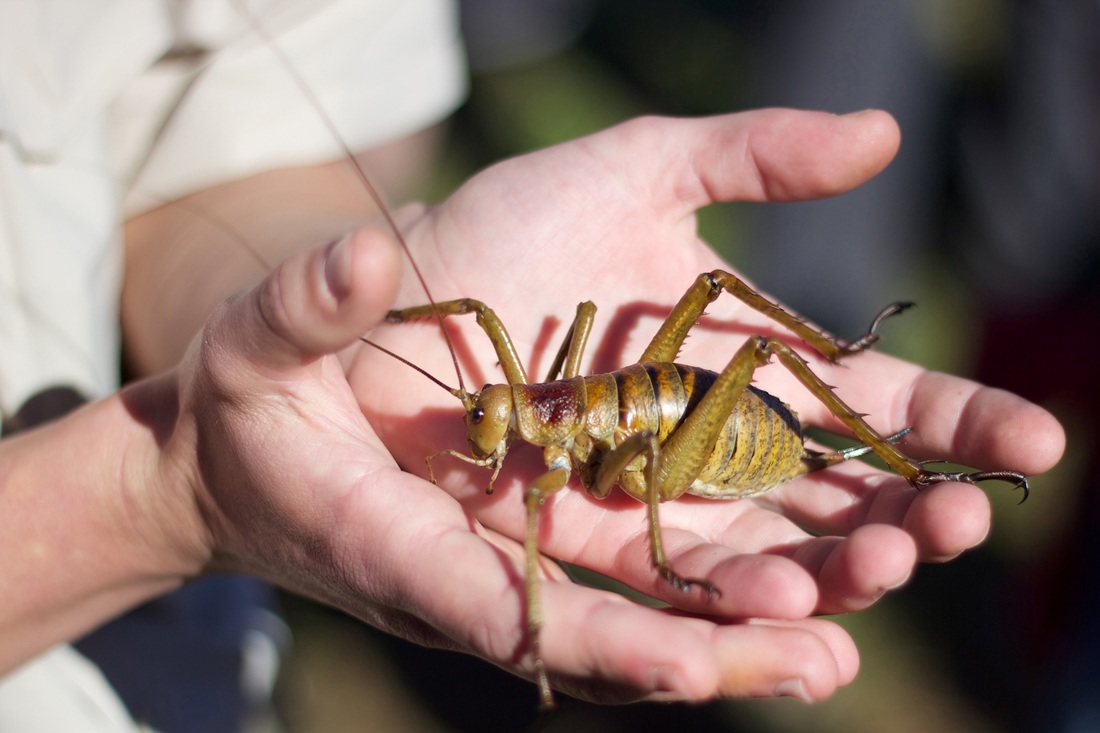 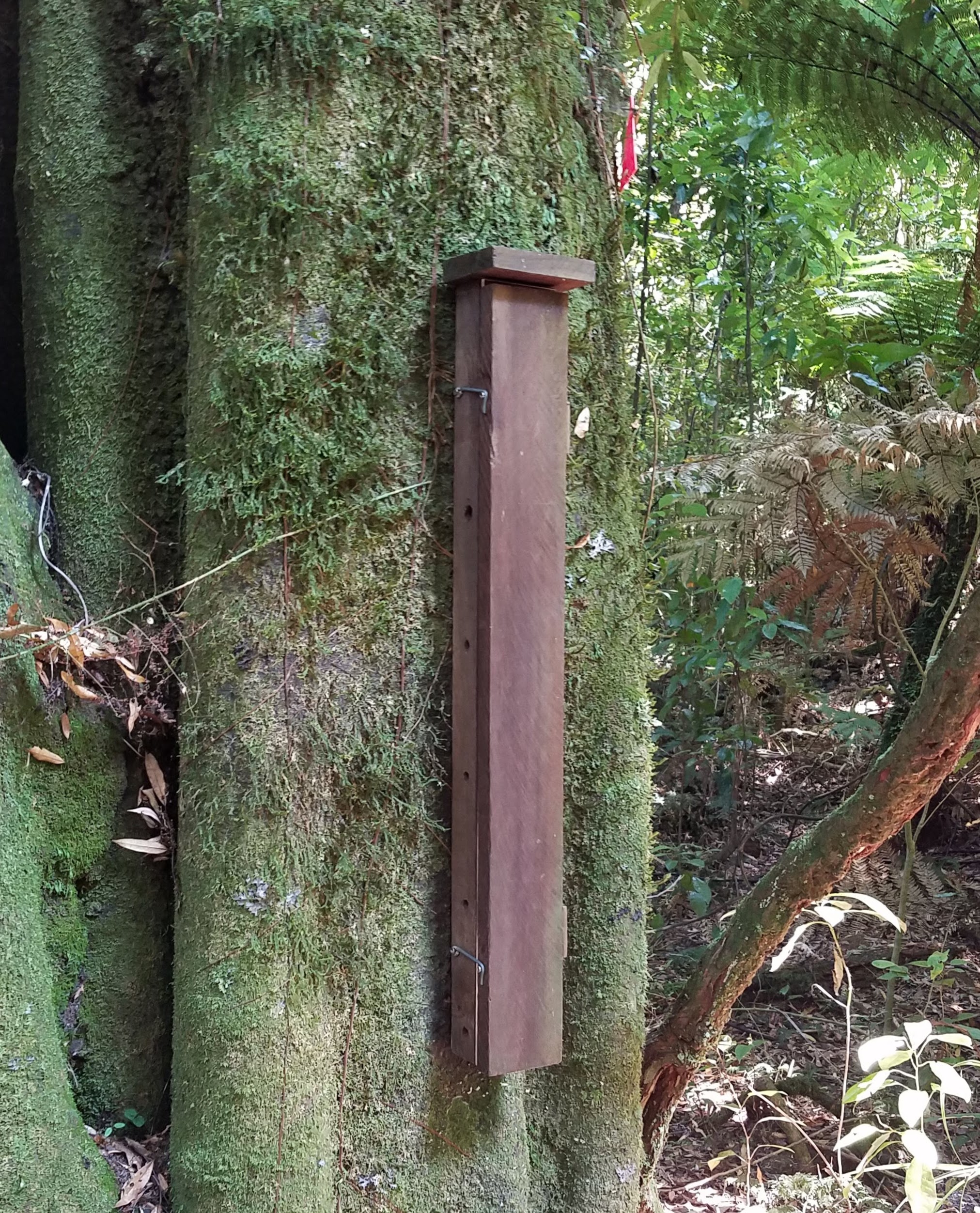 Houses for weta are placed throughout the sanctuary

In addition to providing a safe haven for native animals within the preserve’s old-growth mountain forests, volunteers with the Maungatautari Island Ecological Trust are working to restore more of the original bush ecosystem in the area adjacent to the enclosure. The Trust acquired land formerly used for agriculture and grazing, fenced it off from cattle, and has begun removing non-native plant species. Eventually, the bush will take over, providing even more habitat for native birds, lizards, frogs, and insects. 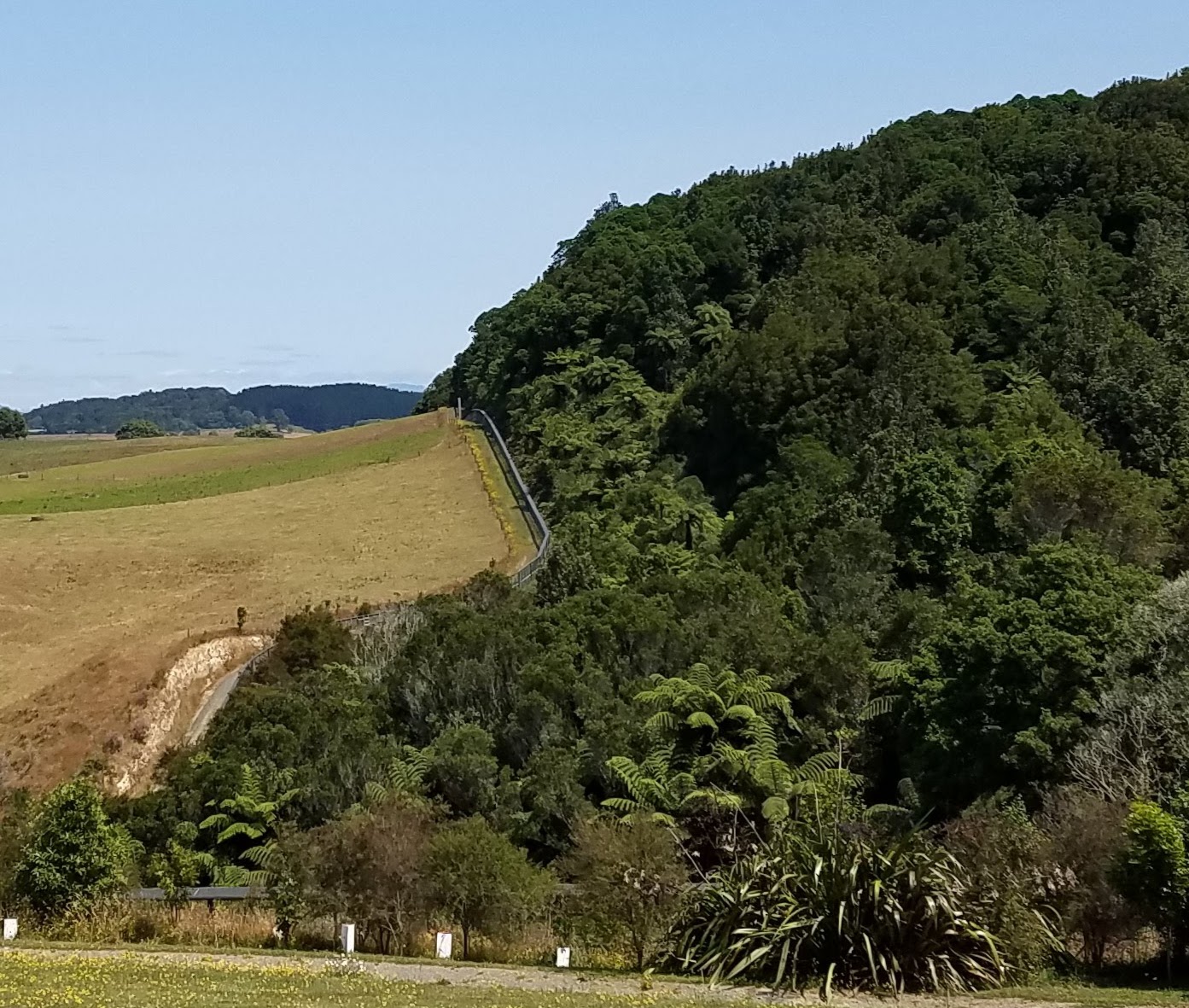 The fence clearly delineates what is in and what is out

As we exited the double-gated enclosure, the stark demarcation between the lush green forested preserve and the dry brown pastures nearby was particularly evident. We felt like we were being expelled from Eden. 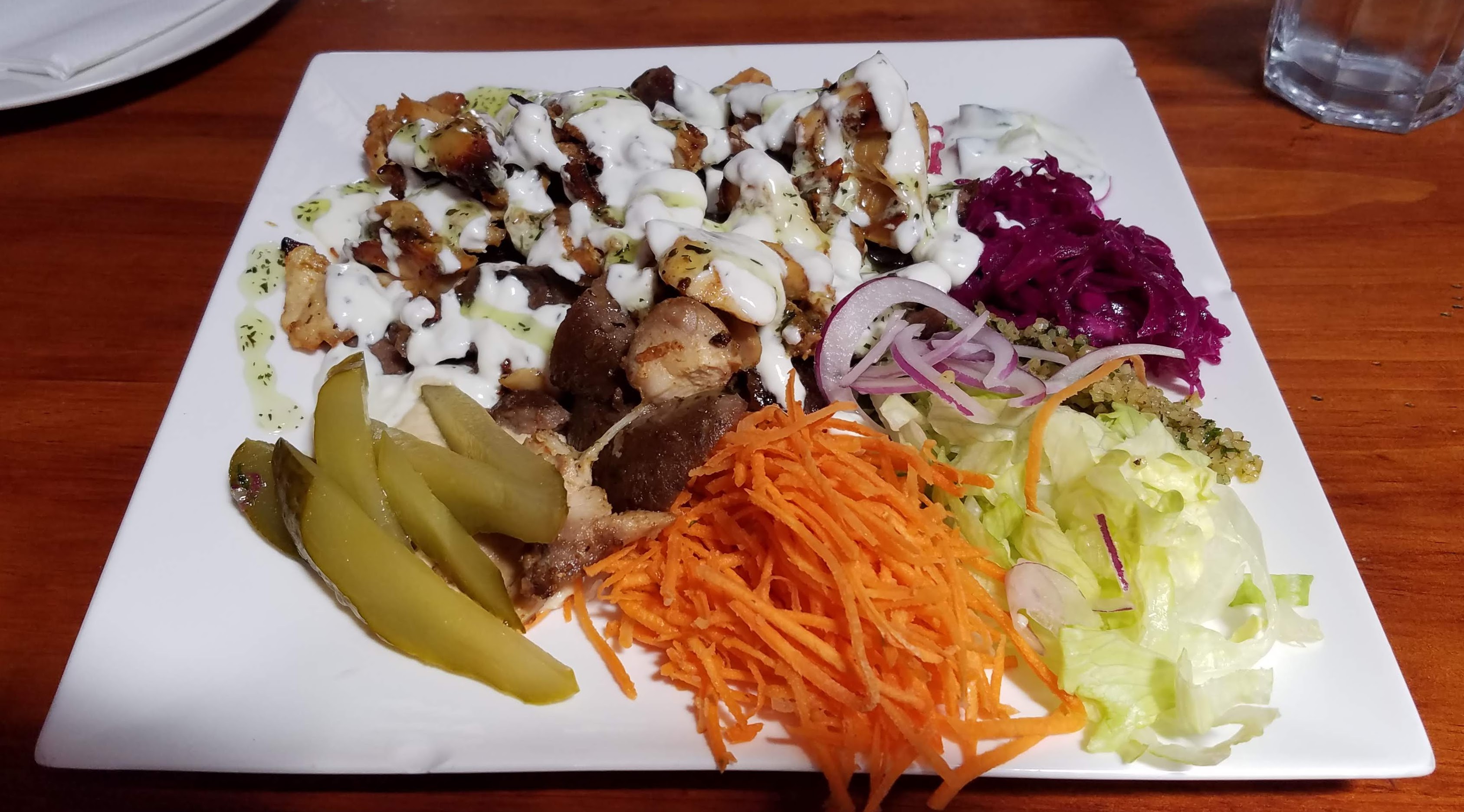 A half-hour drive from Maungatautari took us into the town of Cambridge, where we found a good, cheap mideastern restaurant called Kebabalicious in the quaint downtown area. We both ordered iskender plates that included heaps of lamb and chicken kebab on rice with mint-yogurt sauce, tabbouleh, hummus, red cabbage, and dill pickles—enough to fill us up and still have plenty left for another meal. 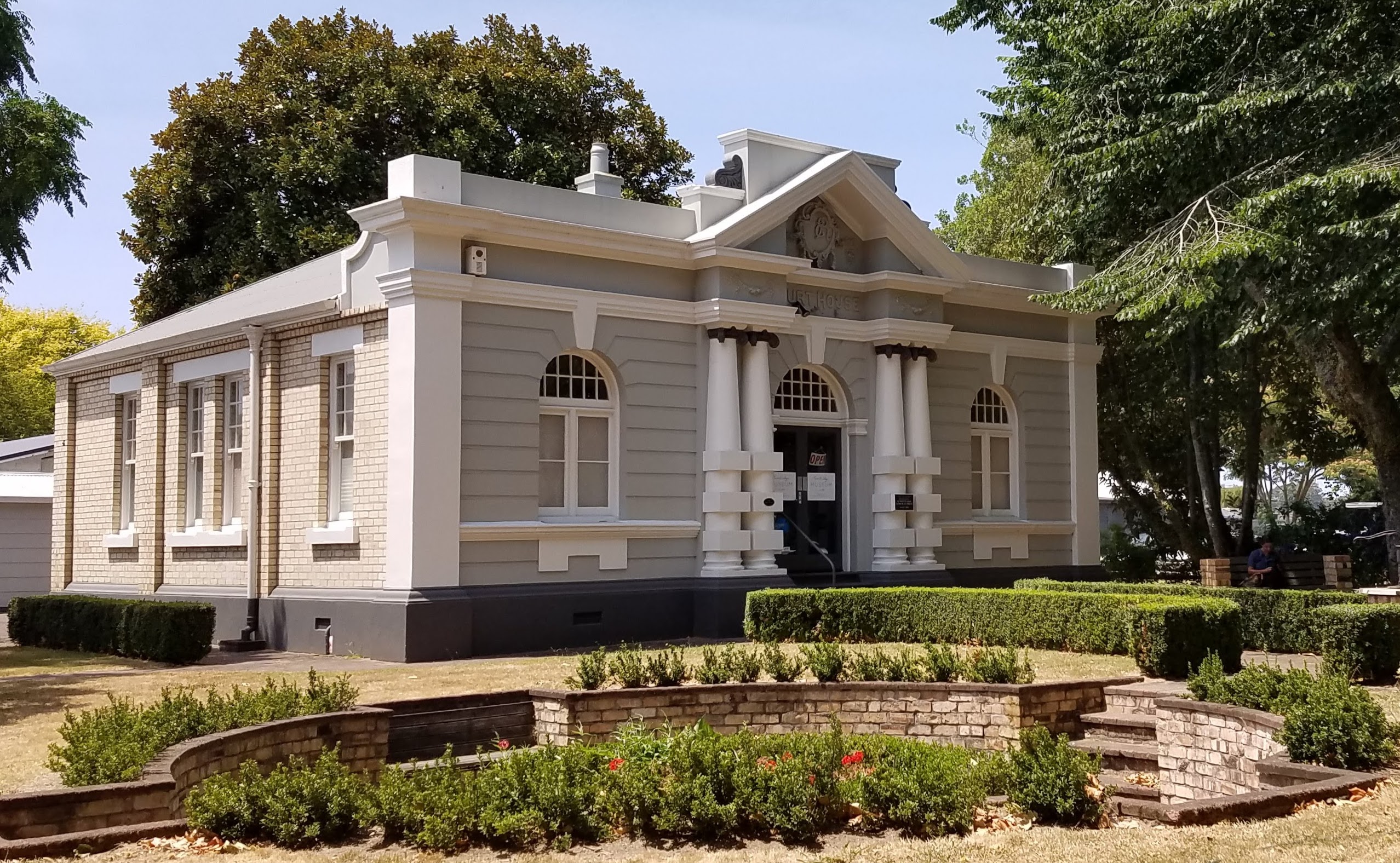 After lunch, we walked down Victoria Street to the Cambridge Museum, a small, somewhat incoherent collection of historical artifacts housed in the old courthouse. We found the museum interesting mostly because we are now in the business of displaying historical artifacts ourselves, but also because it gave us the opportunity to learn more about New Zealand’s non-Church history.

The town of Cambridge (population just under 20,000) grew out of a British military camp established at the end of the Waikato Wars (1863-64), during which the Maori made a valiant but vain attempt to prevent Pakeha colonists from confiscating their land. The Maori concept of land ownership is radically different from the European model. Maori see caring for land as their stewardship, a sacred trust from Te Atua (God). The areas in which they live are regarded as essential parts of their tribal identity. All land rights are held communally and are administered by the local hapu (sub-tribe), so no one person owns or has the right to sell a parcel, even if their whanau (extended family) has lived on a particular plot for generations. Anyone who is part of a whanau has the right to live, work, and benefit from whatever is produced on the land of the family pa (village). So when European settlers arrived in New Zealand and began pounding surveyors’ stakes into the ground, claiming territory as their own, the Maori were slow to understand exactly what was happening.

Once they got the idea, most tribal chiefs realized that they could lose their ancestral lands if they didn’t make some official agreement with the Pakeha colonial government. The result was the Waitangi Treaty of 1840, which the Maori didn’t fully understand because the English concept of “sovereignty” was intentionally misrepresented in the Maori version. The Maori were led to believe that they could maintain their autonomy if they established a land ownership system compatible with that of the British, including a means of legally transferring parcels from one entity to another. More than five hundred Maori chiefs signed the treaty and tried to work with the colonial government despite feeling shortchanged. However, the Waikato-Tainui iwi (tribe) who inhabited the central part of the North Island did not accept the Waitangi Treaty, and in 1858 set up their own unified kingitanga (kingdom) under a respected elder named Potatau Te Wherowhero.

Potatau’s most influential backer, Wiremu Tamihana, was a Christian who insisted that the new kingitanga should work alongside the colonial government in a peaceful, cooperative relationship. Unfortunately, the colonial governor didn’t see things the same way and responded by building up his armed forces. Neither were many of Potatau’s Maori subjects keen on the idea of maintaining a peaceful partnership. They not only feared the loss of their land, but also resented the way they were treated by the colonists: as inferior, ignorant savages—despite the fact that at the time, fully half of the British settlers were themselves illiterate and uncouth. In 1863, Sir George Grey, the colonial governor, provoked conflict by announcing that he was establishing military posts throughout Waikato territory “to maintain law and order and keep the peace.” Furthermore, he proclaimed, anyone who challenged Imperial forces would forfeit the right to possess their land. Soon, British troops marched into the territory claimed by the Maori kingdom and attacked.

Initially, the Waikato warriors enjoyed some advantages over the British. Like the American colonists who fought the Redcoats in 1776, the Maori were fighting on familiar turf, and utilized the same type of guerrilla tactics that had flustered the British Regulars in New England. But unlike their American counterparts, the Waikato were badly outnumbered and outgunned. Despite a few early triumphs, they could not sustain their defensive effort, and in 1864, Tawhiao Te Wherowhero, Potatau’s son and successor, was forced to accept the terms of a slightly amended Waitangi Treaty. 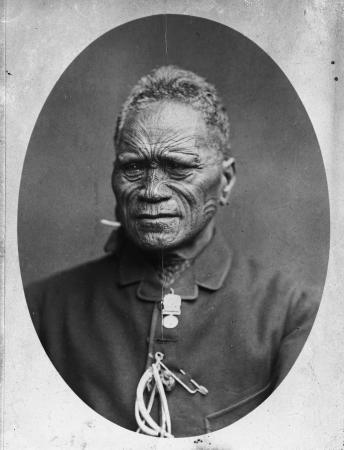 When asked to define the territory he expected to control, Tawhiao (according to legend) set his hat on a large map of the North Island and declared that everything under the hat would be kingitanga land. The Pakeha called it “King Country,” while the Maori called it Te Rohe Patae (Land of the Hat). In 1865, Tawhiao set up a land court to administer ownership claims for the territory. He later established a bank and a parliament, but none of these entities proved very successful. By 1875, the Maori had essentially lost control of ten million acres of land they had lived on, worked on, and cared for since the thirteenth century; Tawhiao’s bank failed when corrupt directors mishandled its funds; and the idea of a separate Maori government was abandoned after the last meeting of the kingitangi parliament in 1896. 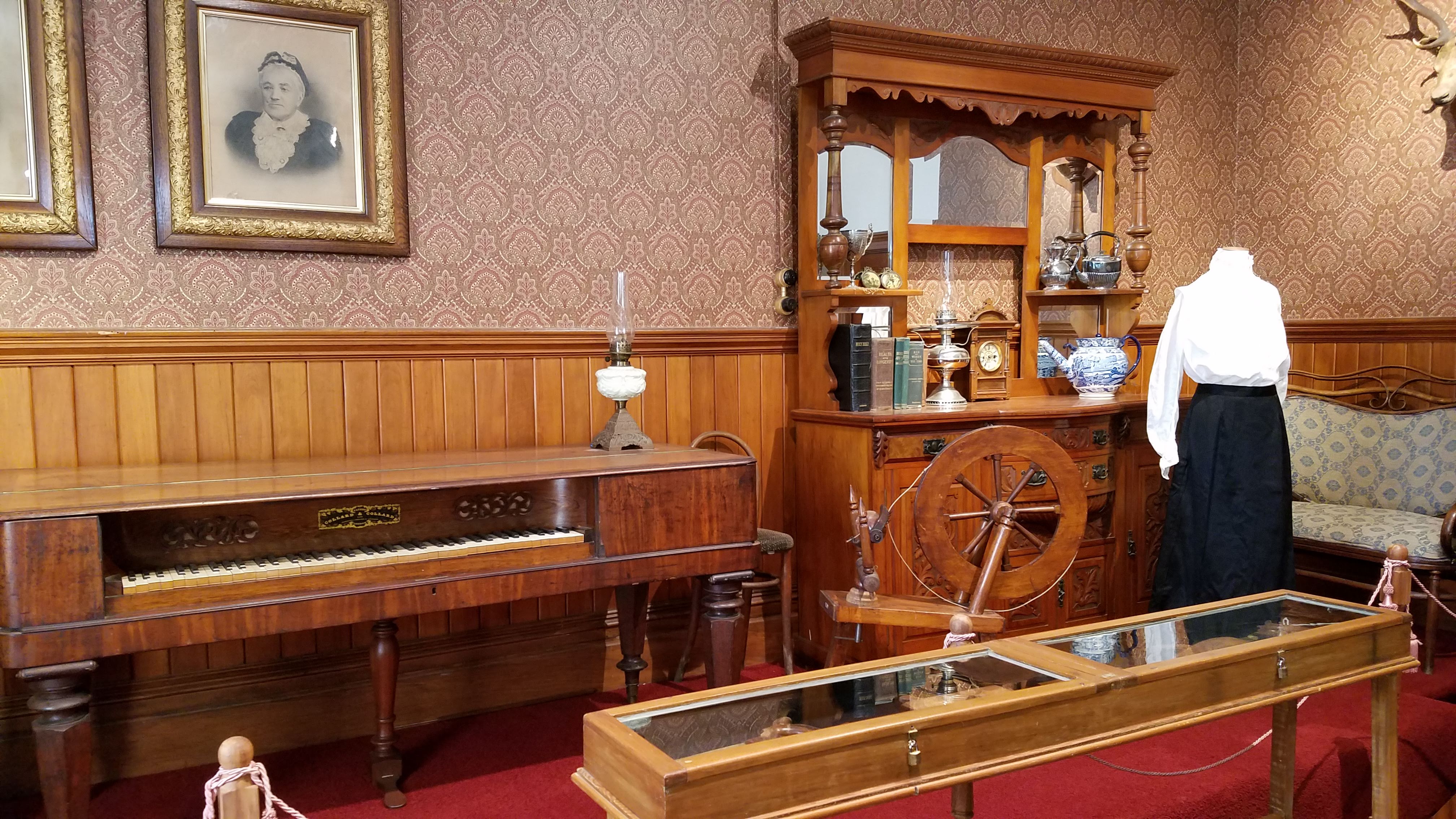 Artifacts in the Cambridge Museum include furnishings from the home of John Arnold and his wife, Maria, who homesteaded on the 50 acres outside Cambridge granted to John in 1865 for his military service. Maria, who operated a butchery in town, was described as “a square block of a woman” who could “quarter meat with the best of them”

Meanwhile, the colonial government was making good on a promise made before the Waikato Wars began that once the Maori were subdued, anyone who fought on the British side would receive a land grant: one acre in the town of Cambridge, plus 50 to 400 acres (according to military rank) in the surrounding area to work as each man desired. Thus Cambridge feels very much like a British colonial town with little Maori influence. The museum features photos and artifacts from the families of the men who served in the colonial militia; it also has a small room devoted to the Cambridge men (and a few women) who fought and died in World War I. 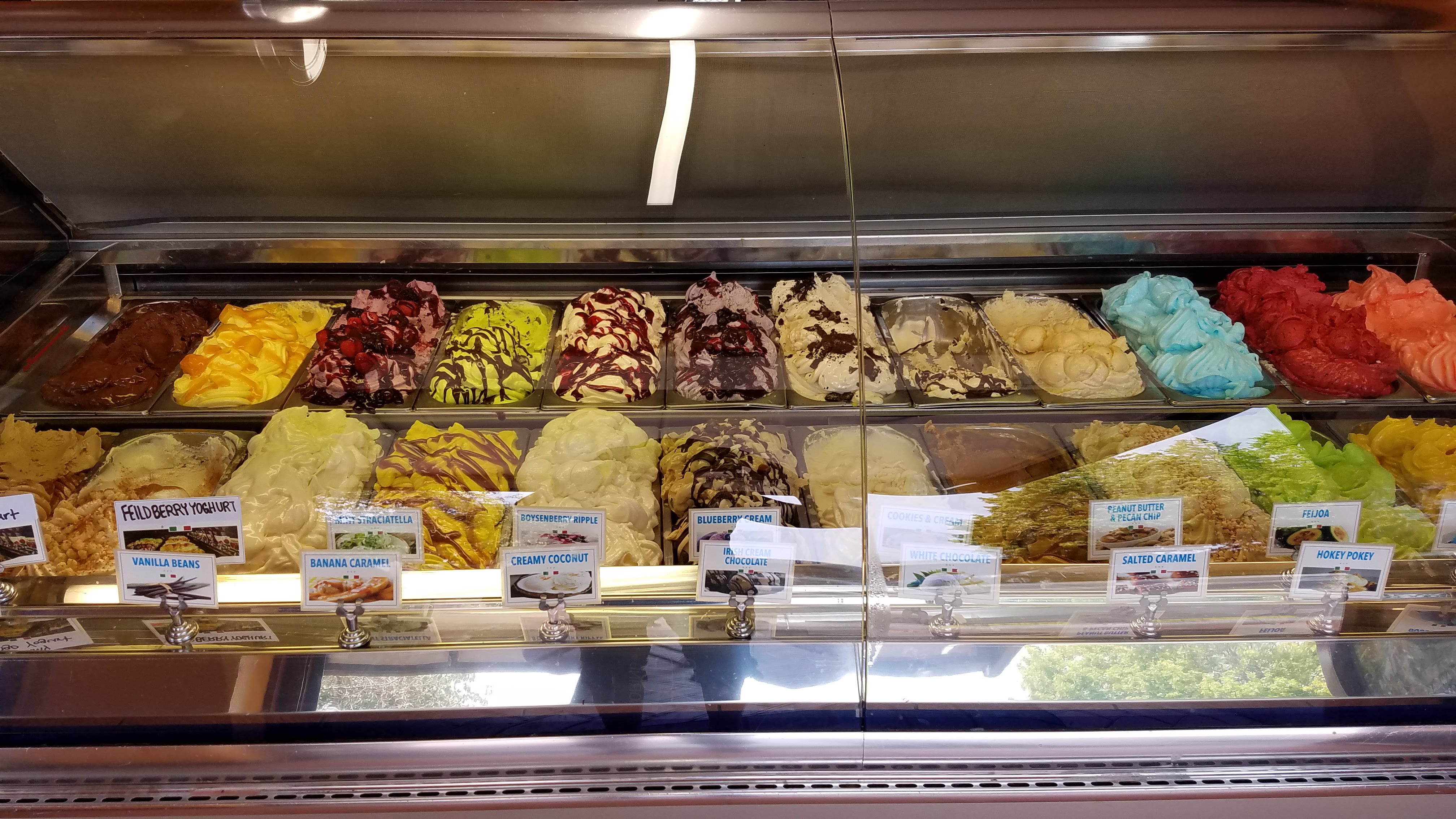 After looking around the museum, we walked back up Victoria Street, did a little shopping, and got some gelato (mango, green apple, and a tangy blend called “forest berries”) at Gelatamore. 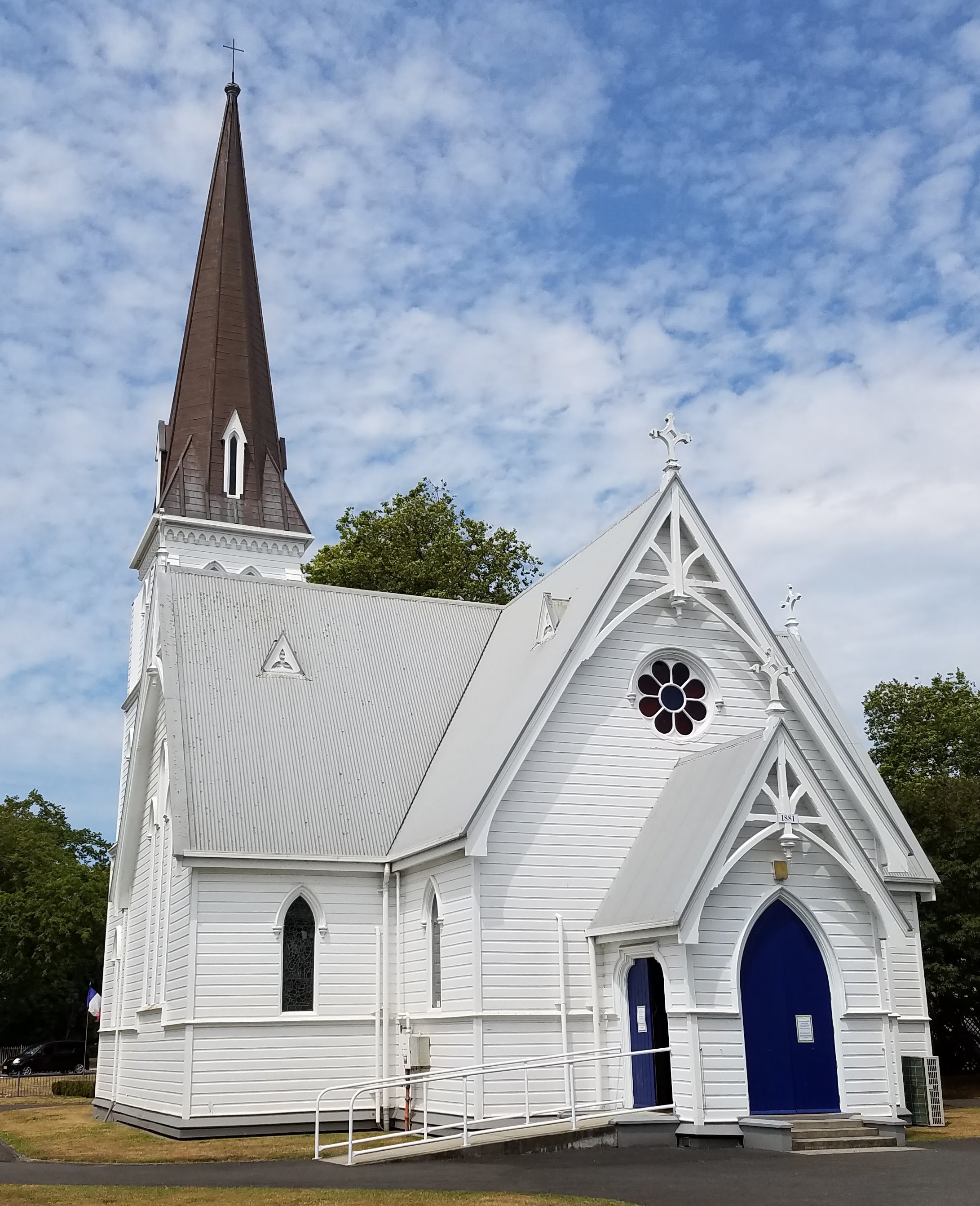 We had hoped to see the notable stained glass windows inside St. Andrews Church, but alas, the little sanctuary was closed for organ repair. Peeking through the crack between the doors, we could barely glimpse the windows; it was easier to see organ parts and woodworking tools scattered across the pews. Fortunately, Cambridge is only thirty minutes from Hamilton and on the main road to parts southeast, so we will have other occasions to stop and see the windows—and maybe hear an organ recital as well.