Blue Spring is a natural attraction along the Waihou River Walk about 70 km southeast of Hamilton that apparently is not well-known except to locals. Even Barry, a native-born Kiwi, had never heard of it until Elder and Sister T mentioned that they had been there. They had found it listed in a book of New Zealand’s best short walks, and told us that it was well worth the drive and made a good half-day trip. We needed a fairly short excursion for Monday 10 February because we had planned to go to Pak ’N Save, clean the flat, and do laundry that morning in addition to video-chatting with our children and grandchildren at 10:00. We also needed to be home by about 5:30 p.m. to attend an evening choir rehearsal, so a short excursion to Blue Spring seemed perfect. Since Barry and Eva had not been there, either, they decided to come along. 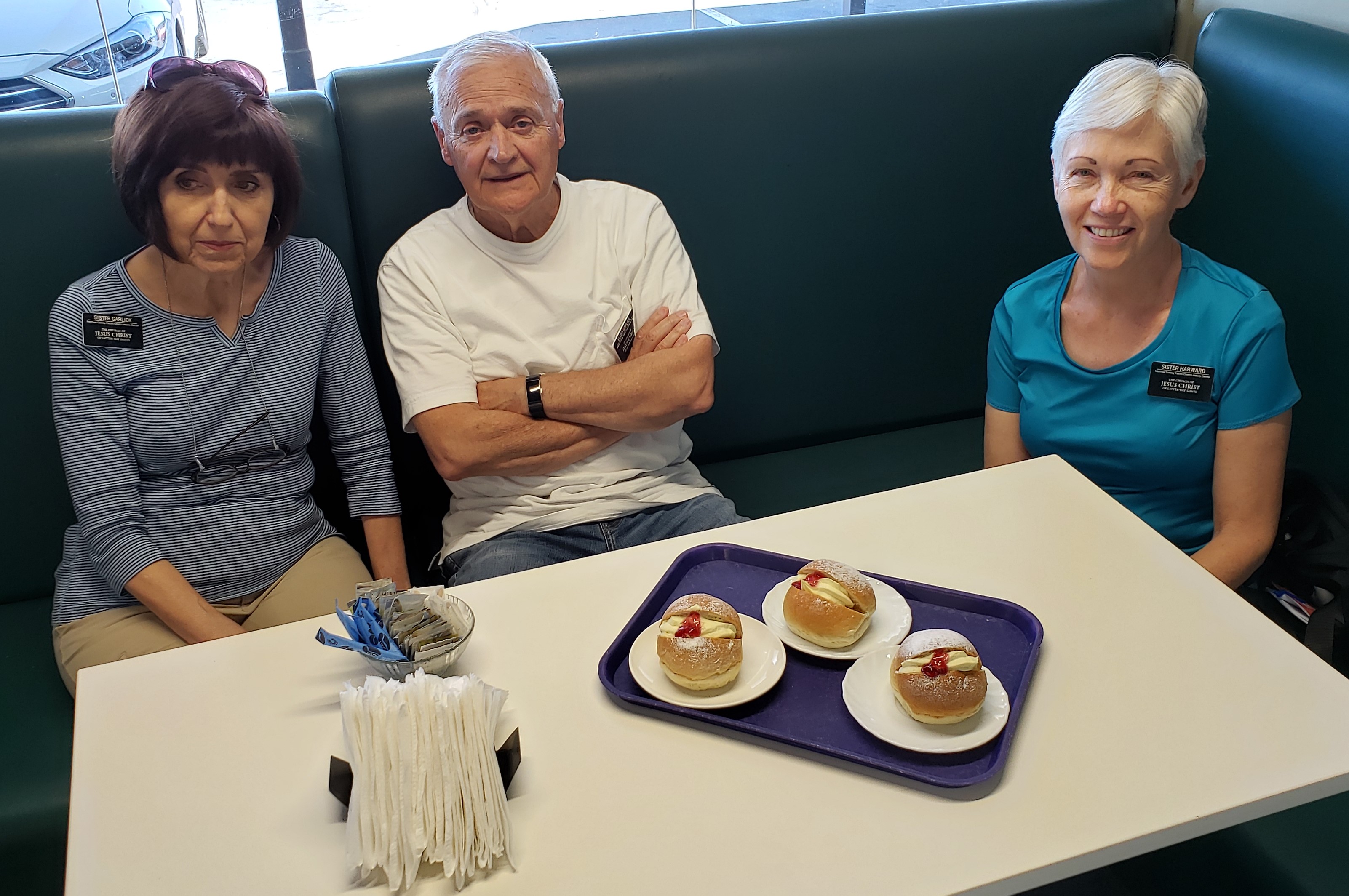 Cream buns at Tommo’s with Eva and Barry

Barry had offered to drive, so they picked us up about 11:15. We had agreed to bring packed lunches to eat once we arrived at the trailhead, but as we headed south out of town Barry insisted on stopping at Tommo’s Bakery. For weeks, we had been hearing (from Barry) about the glories of Tommo’s cream buns, “the best and only true cream buns to be found in Hamilton—probably in all of New Zealand,” and Elder G could not bear the thought of us living one more day without a taste of this unique delicacy. 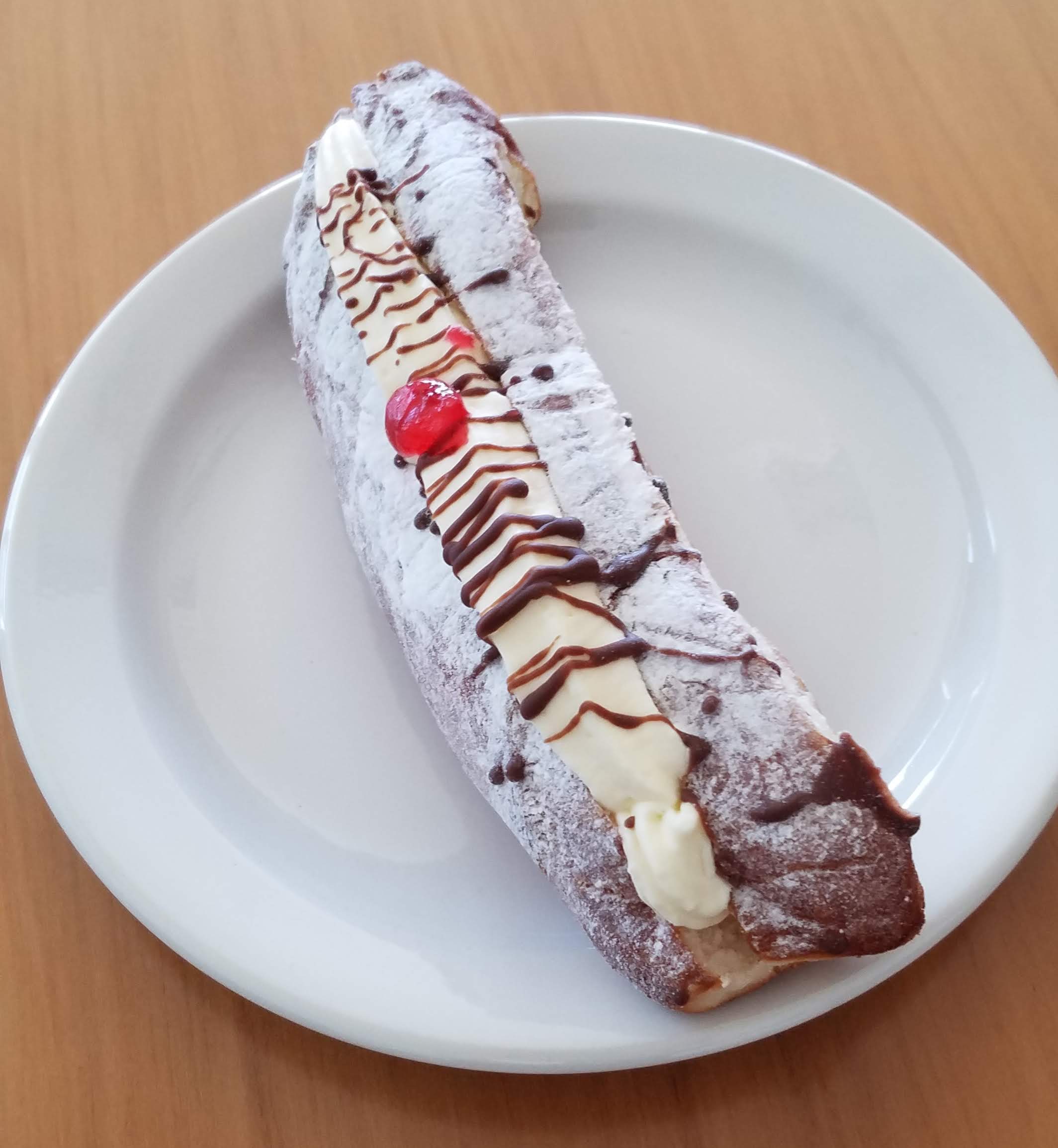 A close relative to the cream bun is what Kiwis call a donut: same soft bun in a longer format, not fried, filled with the same marvelous cream

Variations on the cream bun can be found the world over: basically, it’s a roll with some kind of creamy filling, but not all cream buns are created equal. Mexicans fill theirs with caramel custard and top them with coffee-flavored cream. The French make choux (cream puffs) with an egg-based pastry shell. In Japan, they’re filled with custard. The Chinese steam theirs. In Sweden, they’re called semlor and are filled with almond paste and cardamom-flavored whipped cream. (This is what we were looking for before we left Stockholm last summer, but never found, alas.) In the U.S., the cultural equivalent of a cream bun is probably a filled donut, although the two are not the same thing at all. The version made in New Zealand undoubtedly has its roots in Scotland, where they split sweet, yeast-raised buns, fill them with whipped cream, and add a dollop of jam.

We’d already sampled one New Zealand variation when Peter, a man who occasionally brings treats to the senior missionaries at the MCPCHC, came in with a boxful one morning. These looked like hot dog buns filled with whipped cream and drizzled with raspberry, lemon, or passion fruit jelly, or chocolate sauce (unfortunately, one had to choose) and they were scrumptious—yet, Barry assured us, they weren’t as good as Tommo’s. 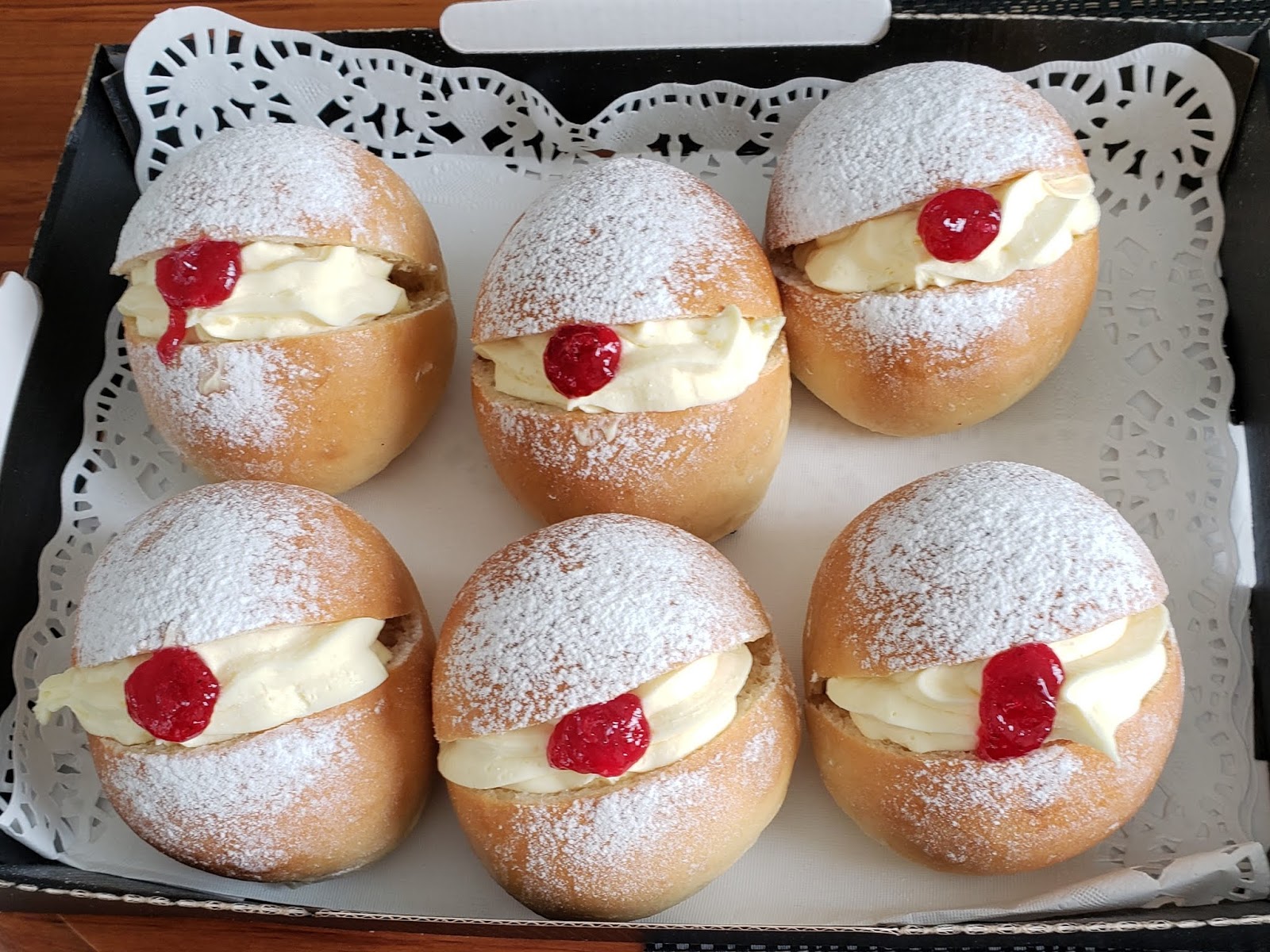 A tray of Tommo’s cream buns

Tommo’s version is based on the Scottish model. They start with a yeast-raised white-flour bun (like a very high-quality hamburger bun or soft dinner roll), slice it (but not all the way through, so the top is still attached to the bottom), stuff it with a very generous heap of whipped heavy cream, and add a dab of raspberry jam. That’s it. Unlike a deep-fried jelly donut, in which the filling may be nearly invisible, Tommo’s baked bun does not leave you guessing about what’s inside. It’s also no surprise that in New Zealand, whipped heavy cream is an essential part of the experience, because here, even “mock cream” is made from butter, sugar, and a little milk—nothing artificial. (When we tried to explain the concept of Cool Whip to some Dinsdale Ward members at a dinner party, they looked puzzled and one of them asked, “Why would anyone want to eat something like that?” Only later did we learn that the one who asked might actually want to eat “something like that” because she is lactose-intolerant, but she still couldn’t see a reason for the existence of Cool Whip.) In New Zealand, whipped cream is much denser than its American counterpart because it always contains at least 35 percent butterfat (standard American whipping cream contains 30 percent) and is much less sweet, often served with no added sweetener at all. The cream buns at Tommo’s are sweetened only with a light dusting of caster sugar (finer crystals than American granulated, but not as fine as powdered) and the raspberry jam. 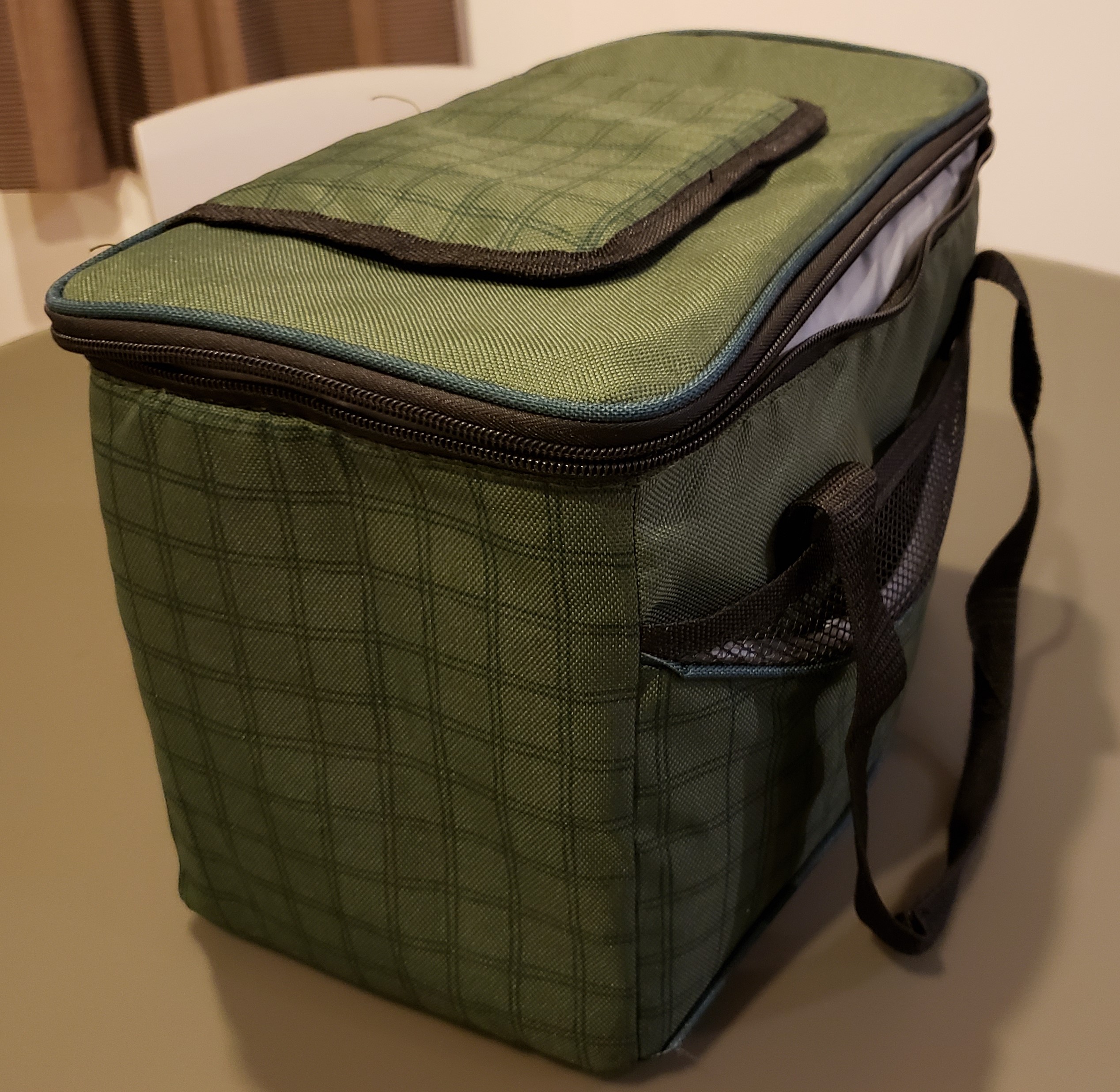 In New Zealand, insulated bags and coolers are known as “chilly bins”; this one is our daily lunch companion

Our verdict: Tommo’s makes an excellent cream bun, substantial enough to feed two. Good enough to stop for if we were in the neighborhood, but maybe not worth making a special trip for. Maybe.

Despite having already consumed our maximum daily allowance of calories and saturated fats at “elevensies,” when we reached the parking area at the trailhead for the Waihou River Walk about 12:30, we decided to go ahead and eat again. The lunches we had packed, we reasoned, contained healthy choices such as carrots, celery, and grape tomatoes in addition to ham and cheese sandwiches. We ate while sitting in the car because there wasn’t anywhere else to sit. 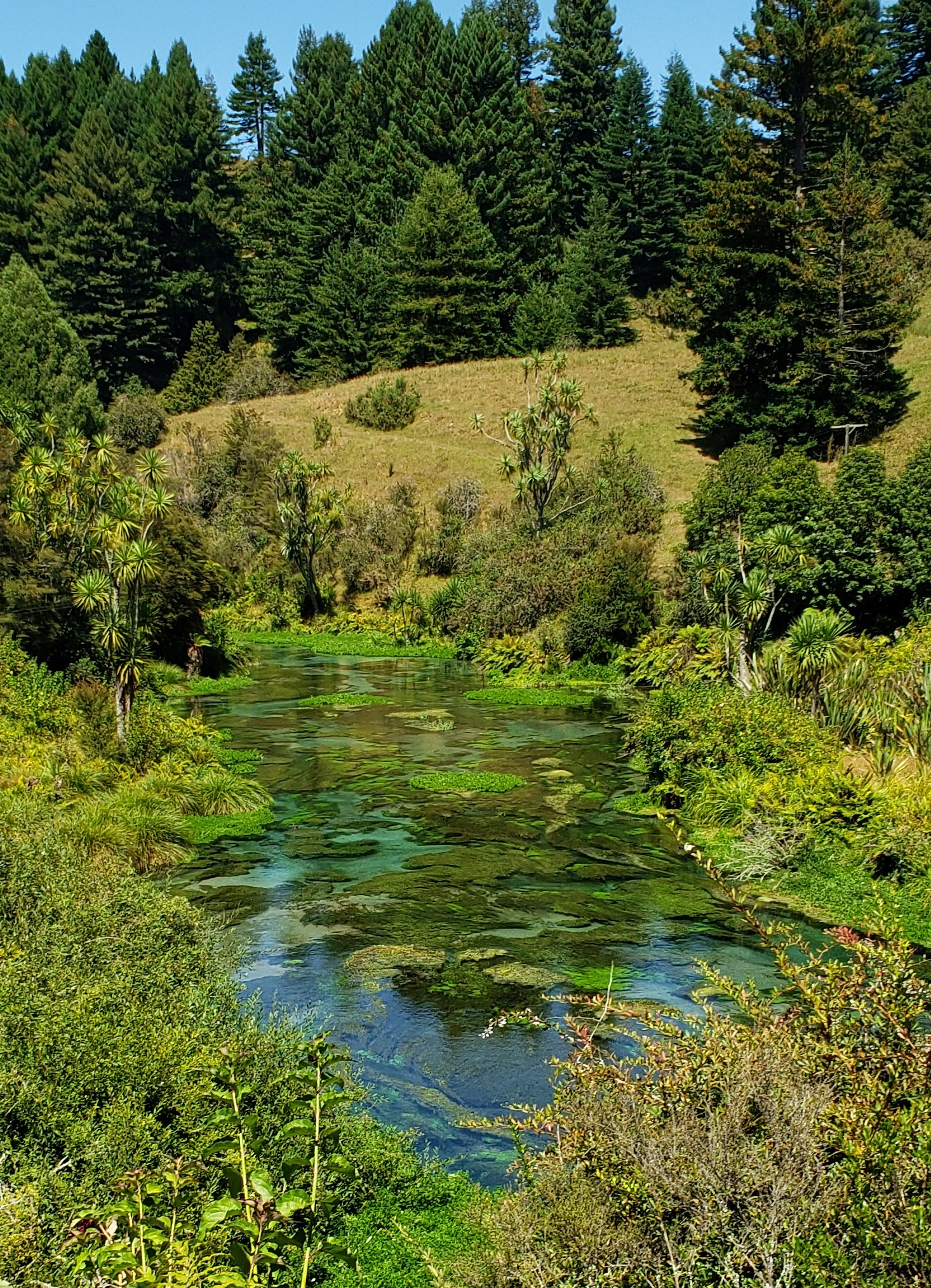 Looking toward the spring 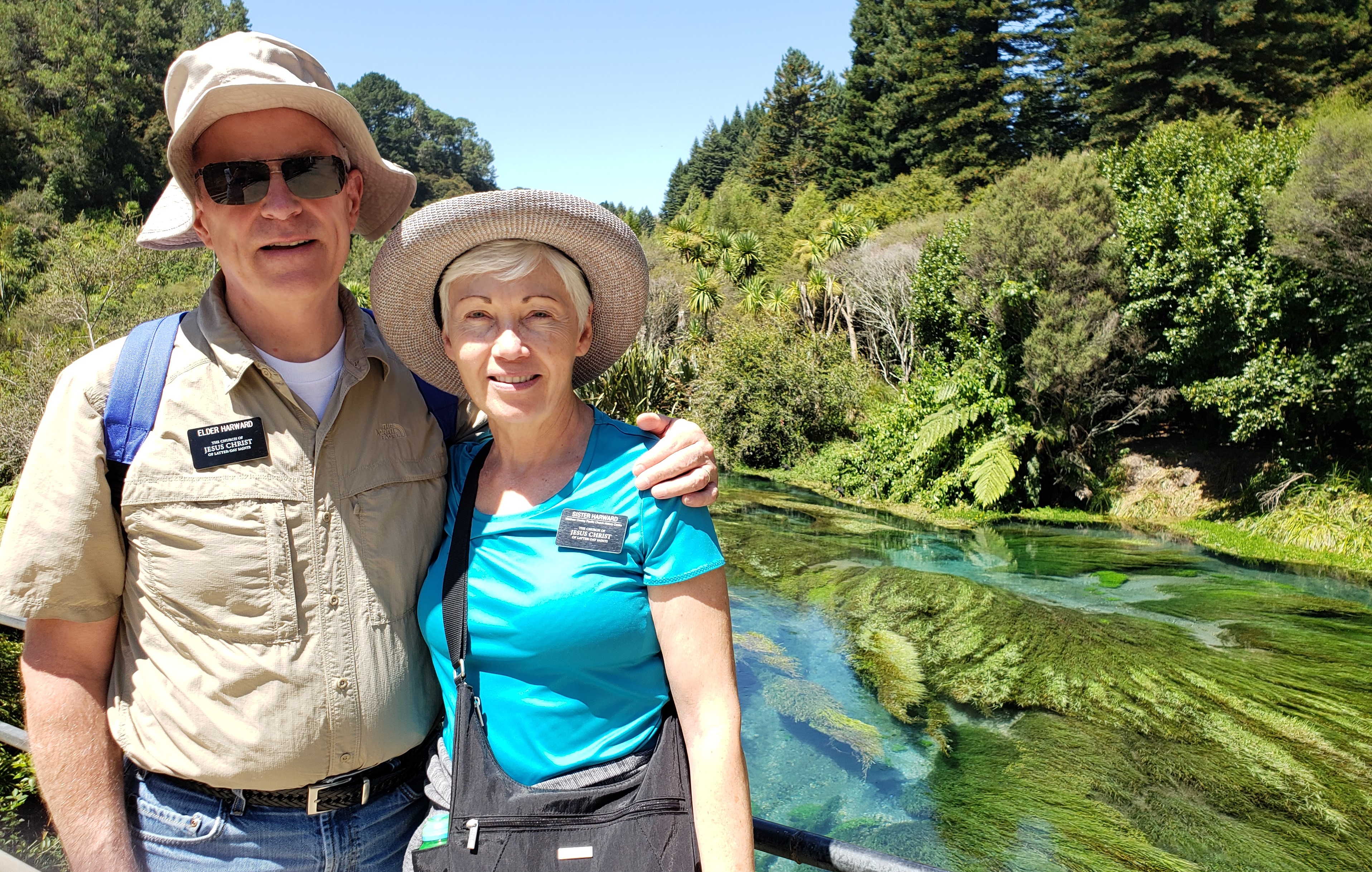 Michael and Nancy enjoy the peaceful beauty of the river

As the name implies, the most distinctive feature of Blue Spring is its distinctive color: a vivid, electric blue. It’s also noted for its purity. Blue Spring reportedly supplies up to 70 percent of all commercially bottled water in New Zealand, so swimming and wading are prohibited anywhere near the spring to prevent contamination. Its water originates as rainfall over the lush Kamai-Mamaku Forest to the east, filters into an underground aquifer, and resurfaces about a hundred years later in Blue Spring, which then becomes the source of the Waihou River. The water flows at a rate that could fill a six-lane, 25-meter swimming pool in twelve minutes. The temperature remains a constantly chilly 52°F, which makes it easier to resist the urge to stick your feet in. (And we were tempted, because the day was hot and much of our walk was in full sun.) 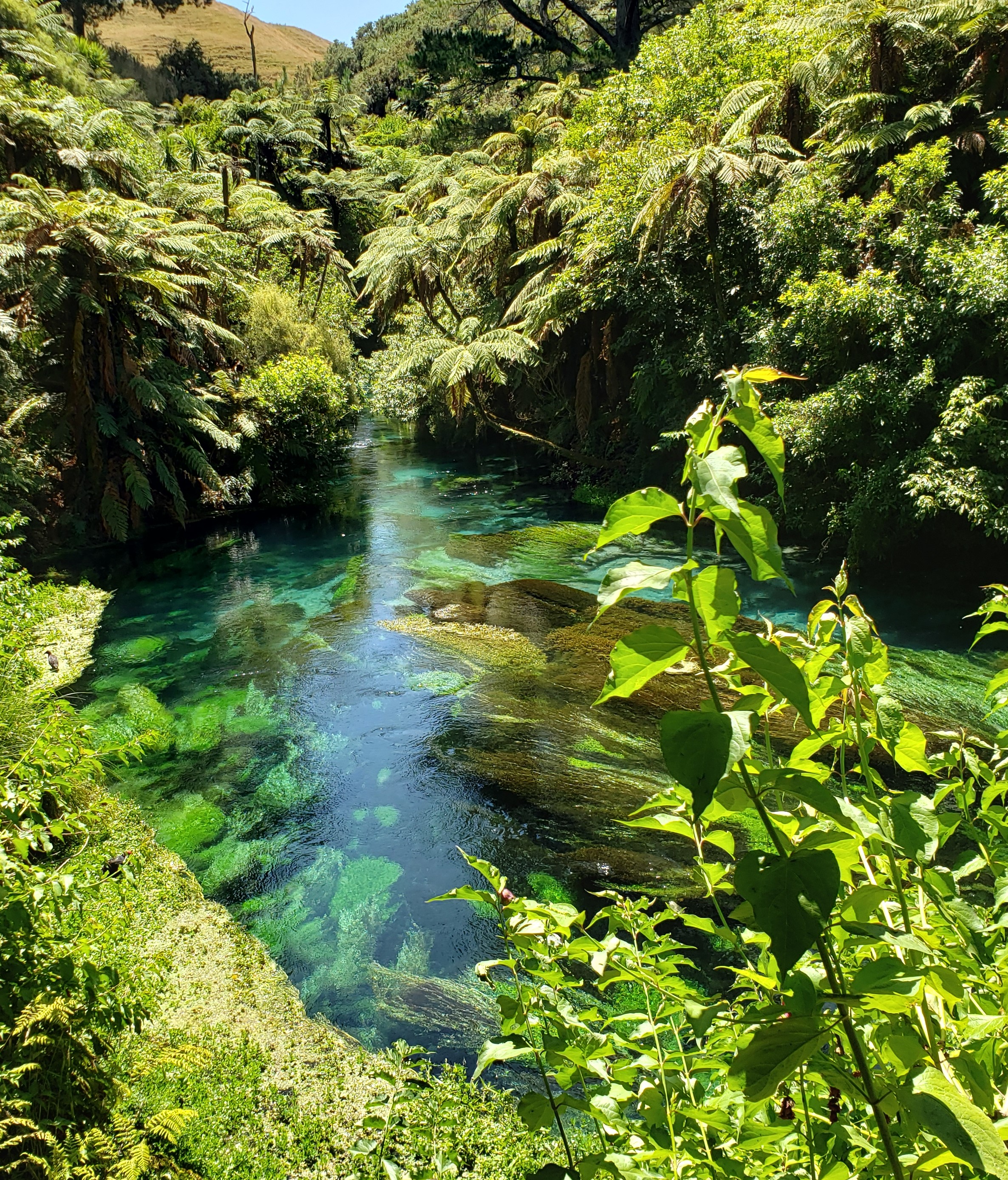 The water is so clear, one can see the bottom as clearly as the bush along the edges of the river 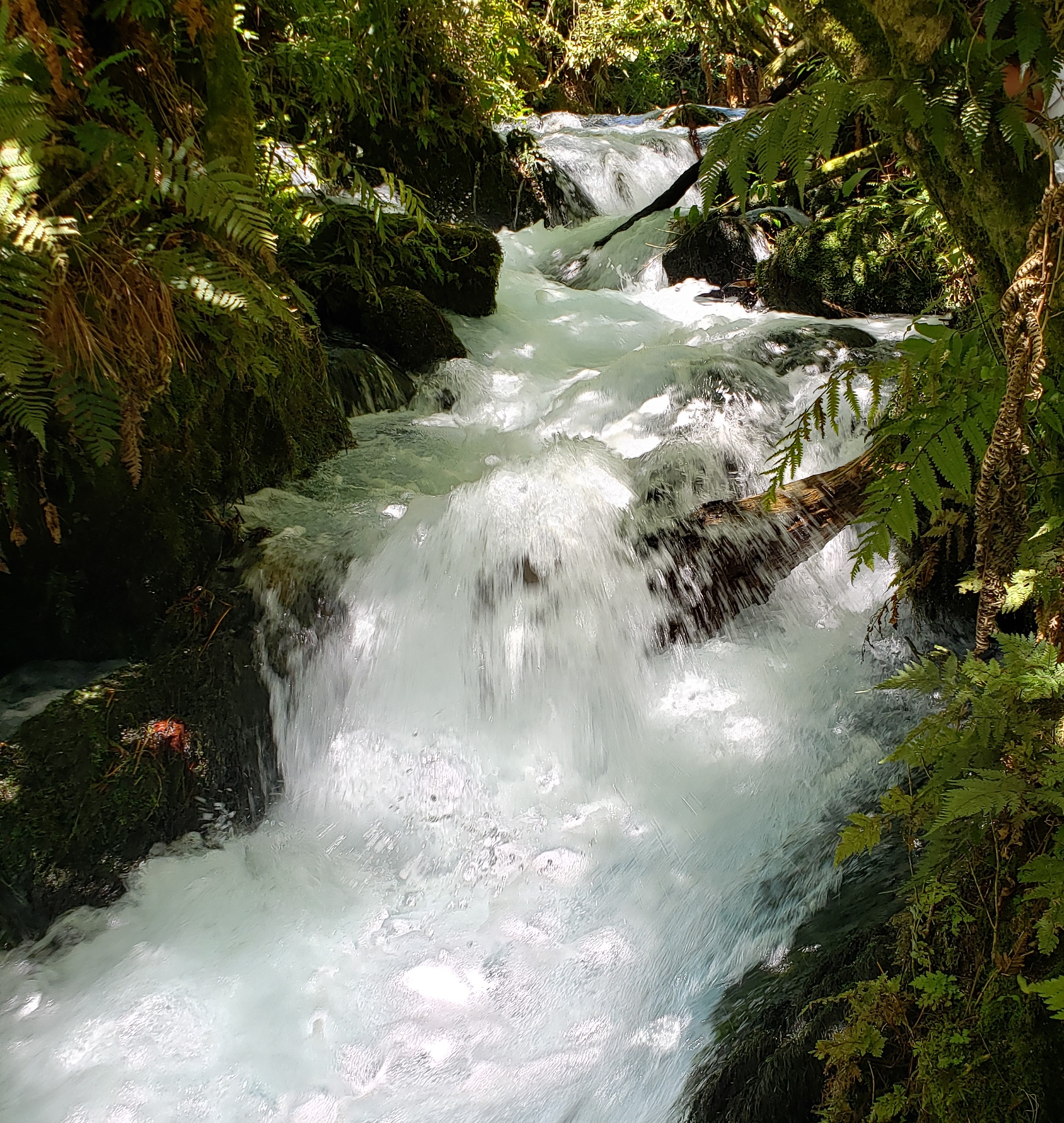 The river sports a few small but beautiful waterfalls 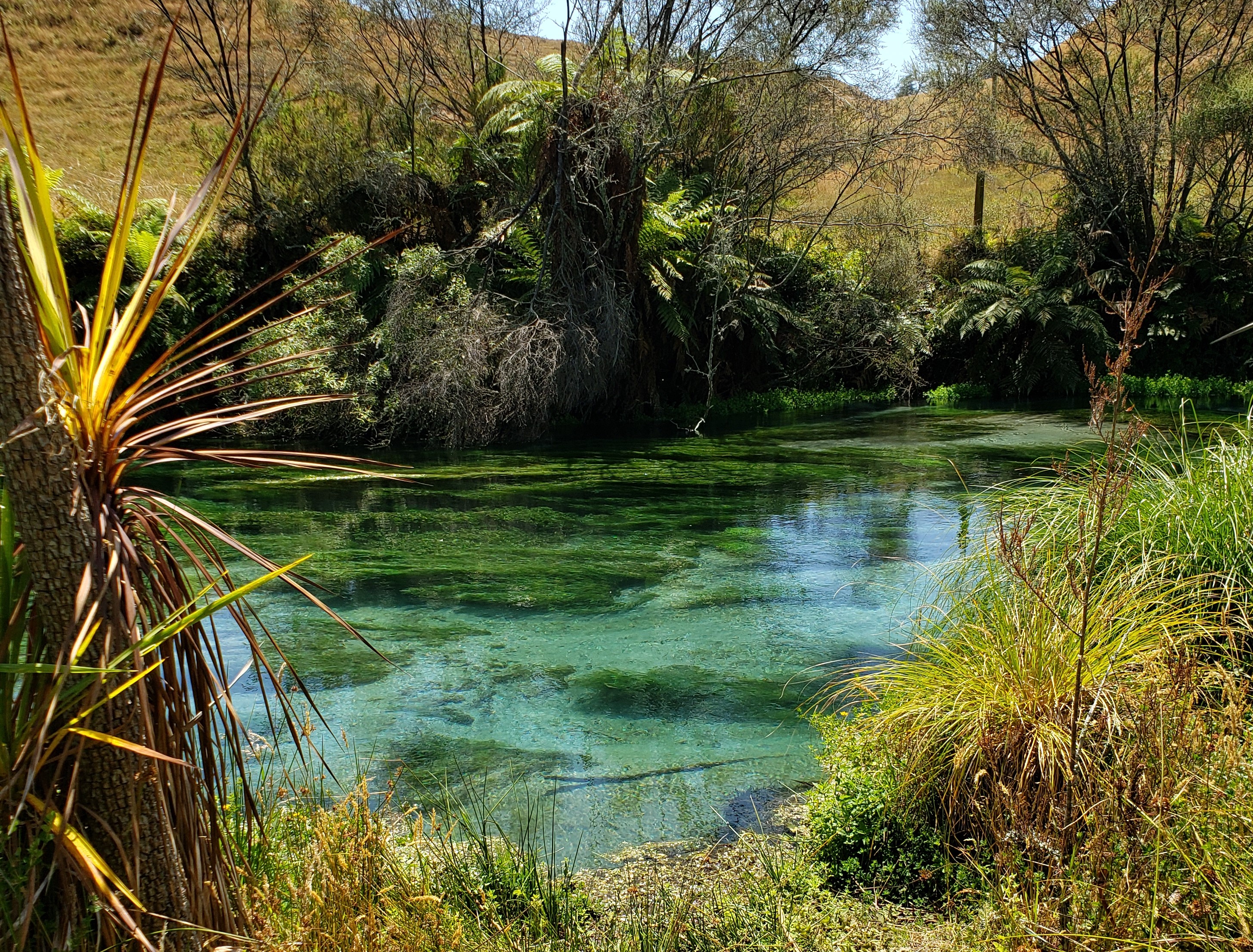 Swirls of iridescent blues and greens in the Waihou River

The Waihou River Walk follows the river through wetlands, across rolling grazing land, and under hillside trees and ferns. Ducks and geese abound. As the track heads uphill through the bush, it passes some stretches with rapids and small waterfalls, and offers occasional glimpses of trout and other fish. The color and clarity of the river truly are amazing, as are the brilliant green aquatic plants that sway in the current. Had the water been deeper, Nancy could have imagined this place as the setting for that scene in Harry Potter and the Goblet of Fire in which Harry and the other contestants in the Tri-Wizard Tournament have to find their friends and free them from captivity amid the weird underwater flora and fauna. 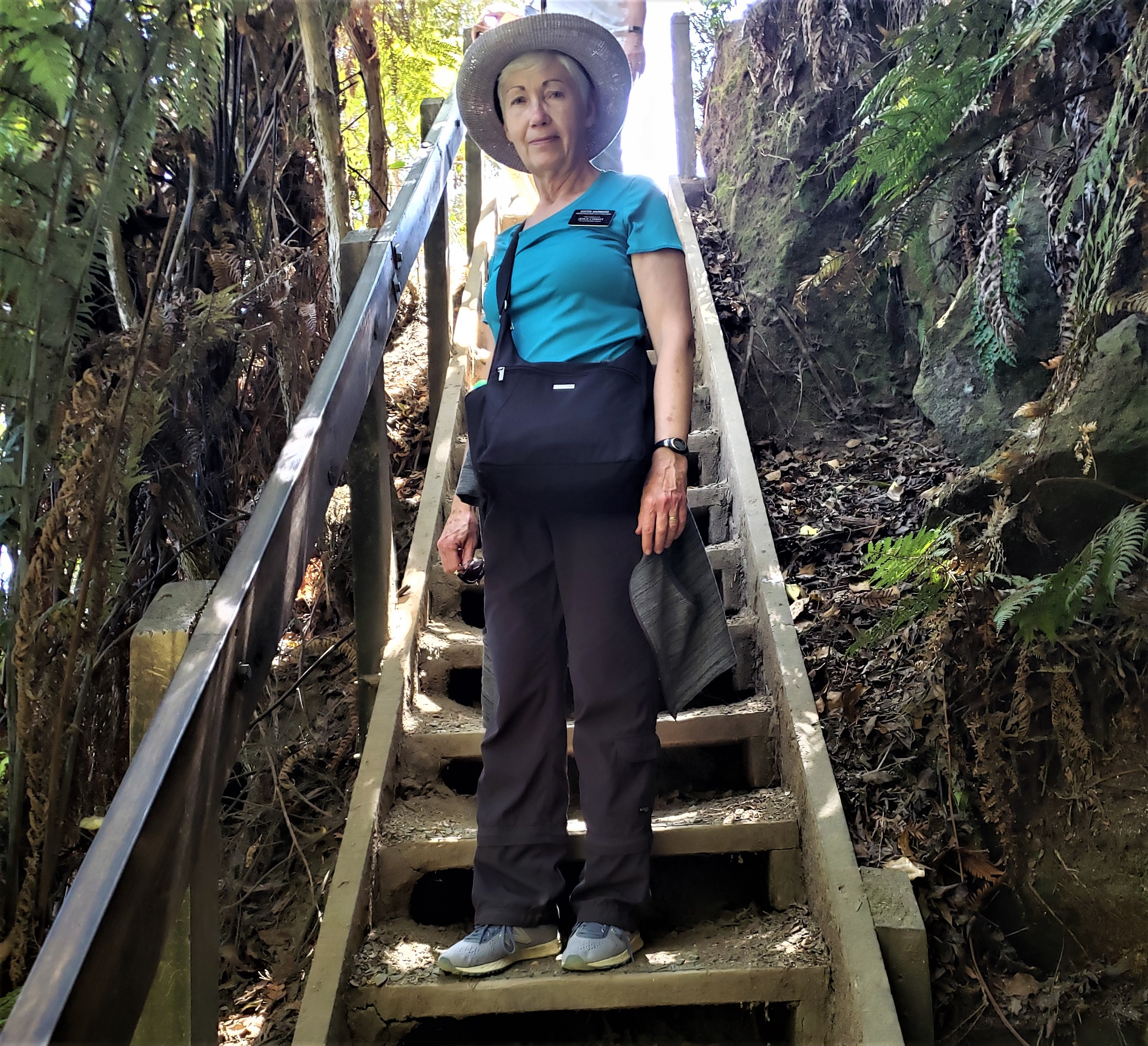 In contrast with the frigid blue water, the track was unusually dry and dusty, and the pastures were brown. We walked along the river for nearly three kilometres, after a while wondering whether we should expect any change in scenery if we kept going. When we encountered a group walking in the opposite direction, we stopped them and asked what lay ahead. “More of the same” was sufficient response to persuade us to turn around and re-enjoy the beautiful landscape we had just walked through on our way back to the car rather than try to reach the end of the trail about two more kilometres away.

In Tirau, a ewe and a ram fashioned from corrugated metal house a tourist information center and a gift shop 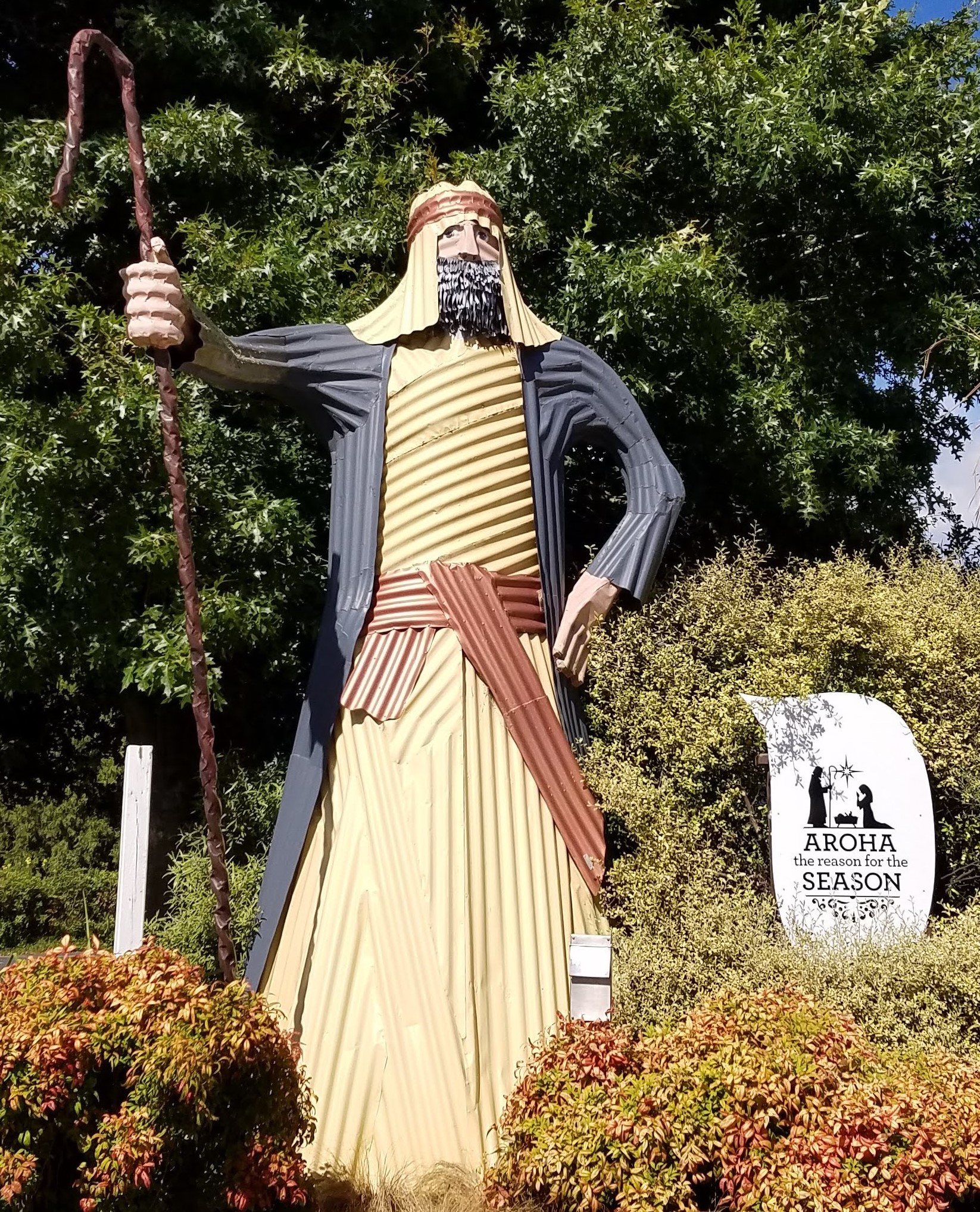 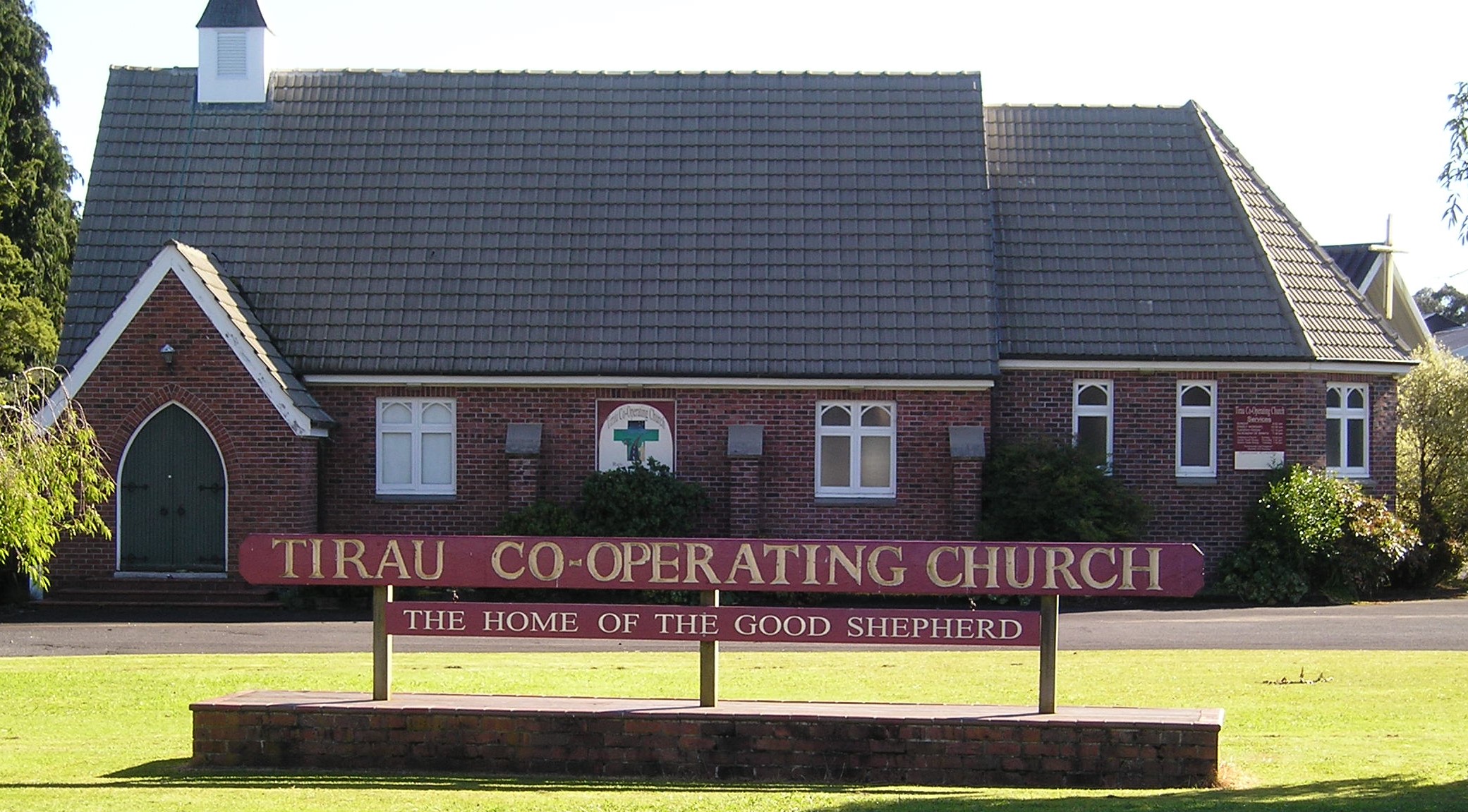 Home of the Good Shepherd

On our way back to Hamilton, we stopped in Tirau, a little town at the junction of three major highways. Its most distinctive feature is a group of corrugated metal buildings shaped to resemble animals: a dog and a couple of sheep. Nearby is the more architecturally conventional Church of the Good Shepherd, but there’s a corrugated metal pastor on its grounds, watching over all. One of the sheep buildings houses a large gift shop with many nice wool items. We enjoyed browsing while Eva tried on sweaters. 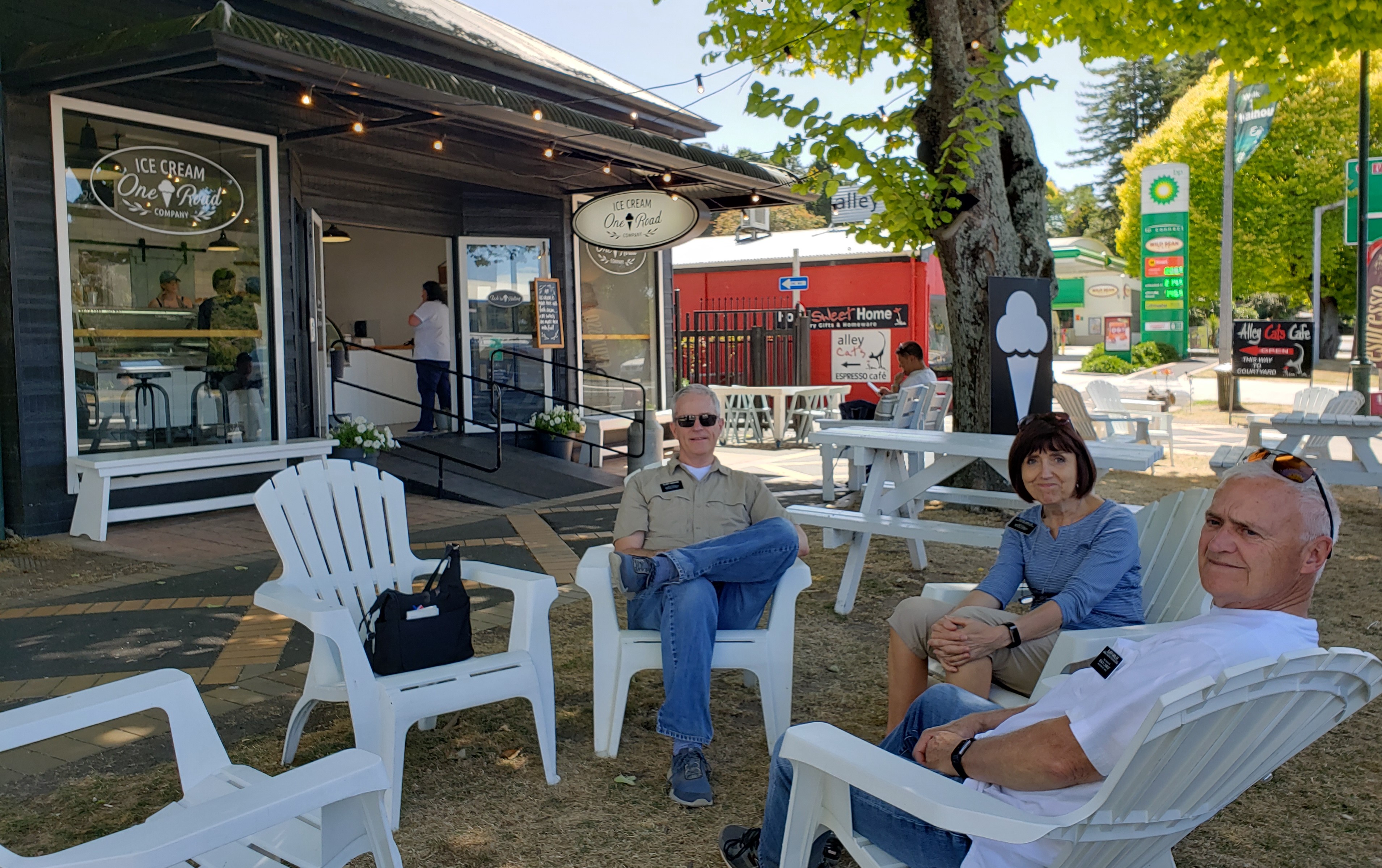 One Road certainly will see us again

While driving through Tirau earlier in the day, we noticed an ice cream shop across the street from the animal buildings that looked like it was worth trying. (Of course, with Michael and Barry, just about any ice cream vendor seems to be worth trying.) It was difficult to decide which of the many interesting flavors to order (beetroot & berries sorbet and “coconut rough” were the winners), but we had no trouble deciding that One Road Ice Cream is one top-notch ice cream shop. Because so many roads lead to Tirau, it’s likely that we will pass through it many times during our stay in New Zealand. One Road’s ice cream may even be worth a special trip.