Monday Excursion: Back to Raglan

Monday Excursion: Back to Raglan

29 January is Auckland Day, commemorating the day in 1842 when Great Britain claimed the province of Auckland for the Crown. Given that Auckland no longer belongs to the Crown and that New Zealand no longer has provinces (it’s now divided into “regions”), the holiday has no current relevance other than that it is a national day off work for the North Island. New Zealand’s school year begins the first week of February, so Auckland Day provides the same sort of end-of-summer opportunities that Labor Day does in the States.

So on 27 January, when Auckland Day was observed this year, we set out for Raglan once again on a day when a sizable portion of the population of Hamilton also decided to head for the beach.

This time we went with Barry and Eva. Barry grew up in Auckland and attended the Church College of New Zealand in Hamilton during his youth. Barry also was a surfer in his younger days, so Raglan had been a frequent destination. We probably should explain here that in those days, college meant secondary school in New Zealand, so Barry’s teen years living near one of the world’s greatest surfing beaches were spent in much the same way as Michael’s teen years were spent living near Rocky Mountain ski resorts: frequently setting the books aside and heading for either the shore or the slopes.

When we told Barry that we had driven to Raglan that first Sunday here, his first question for us was: “Did you go to the surfing beach?” Apparently we had driven past it, but since we didn’t notice any surfers in the water, and because the shore didn’t sport the equivalent of ski lifts, we didn’t realize what we were looking at.

“Then I’ll have to take you back,” said Barry, and Auckland Day provided a good excuse. The Temple View Stake (of which Barry and Eva are members) was holding a holiday picnic at the Raglan Domain, so they invited us to come along.

Manu Bay, the surfing beach, is a few kilometres beyond that one-lane bridge in Raglan, though this time the wait didn’t seem as long. Barry parked the car at the top of the bluff and directed us to sit on the grassy bank, where we had a great view of the surfers below. We could see two or three dozen paddling their boards through the water.

Surfers trying to catch a wave in Manu Bay

As we watched, Barry explained Manu Bay’s attraction for surfers: it has probably the longest, most accessible, and most consistent left-hand break in the world. On a good day, if your skill level is up to the task, you can catch a wave and ride it for nearly two kilometres before reaching the shore.

Sadly, this was not a good day for catching a long break: the wind was too wimpy. But it was a perfect day for sitting lazily on the bank, watching the surfers do their best with the small waves that rolled in. 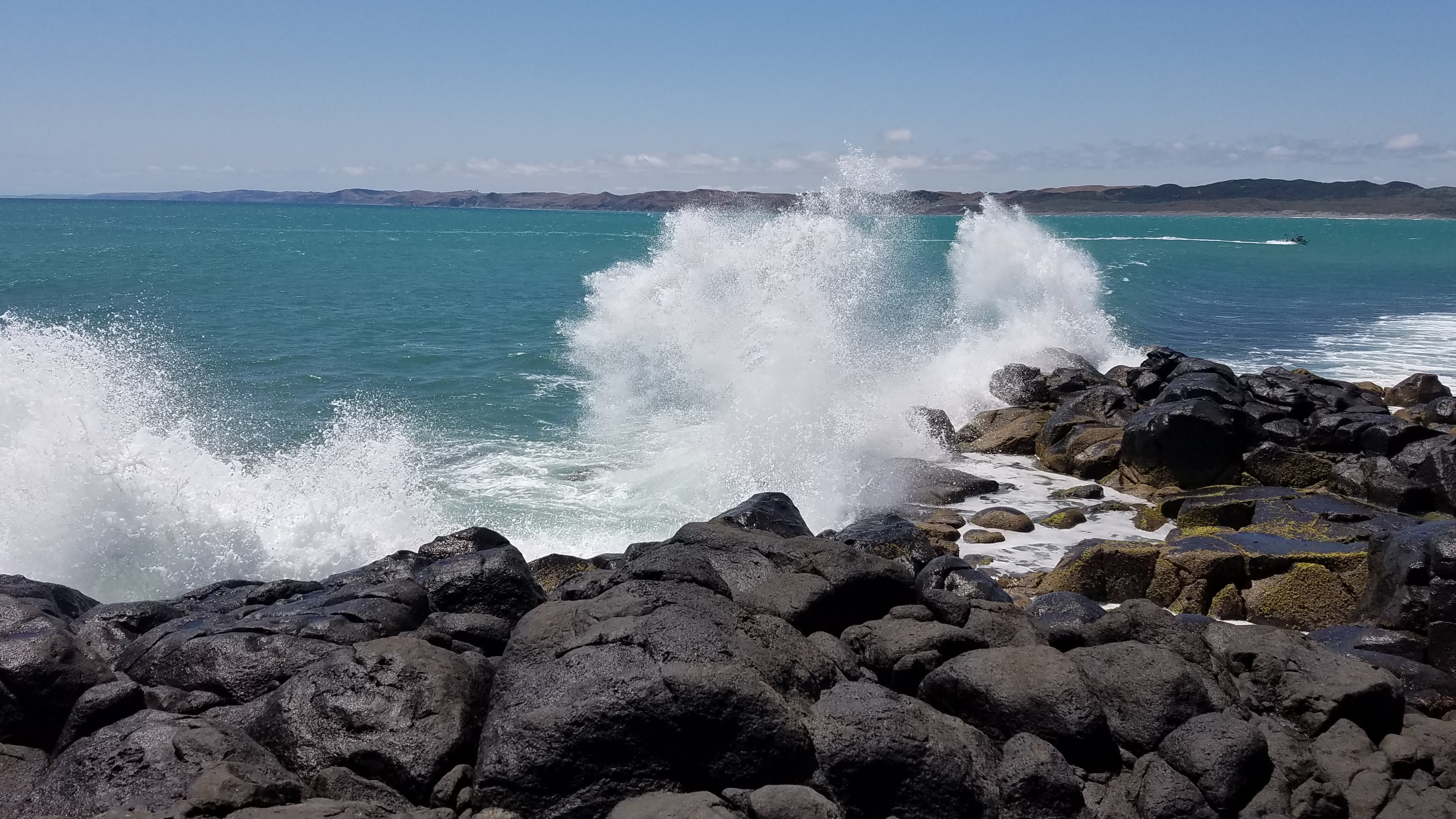 More dramatic surf was pounding the rocks at Manu Bay

After a while, we decided that we’d probably better go to the Domain and put in an appearance at the stake picnic. The public recreation area occupies a long spit of land that extends into the bay, and it was crowded, of course, so we had trouble locating the group from Temple View Stake. Our first attempt on one side of the peninsula was not fruitful, and we couldn’t find a place to park there, anyway, so we drove around to the other side, closer to town.

Bridge to the picnic area at the Raglan Domain

As we pressed our way through the people thronging a bridge toward the picnic area, we were greeted by many calls of, “Hi, Missionaries!” so we knew we were moving in the right direction. Folks of all ages were using the bridge as a diving platform to cannonball into the inlet below. 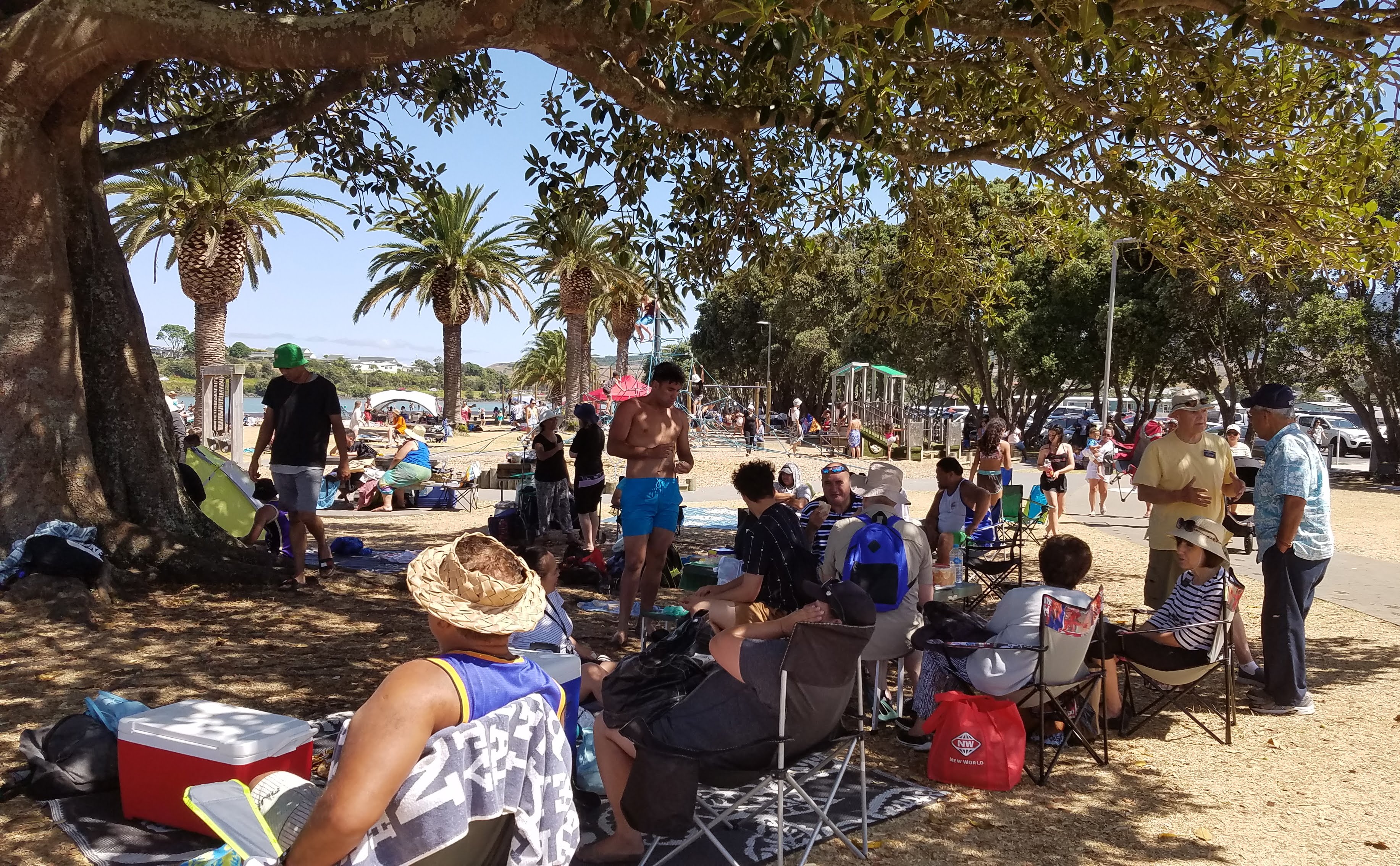 At the picnic area, we met Brother and Sister Tarawhiti, who had been Barry’s dorm parents when he was a student at CCNZ (pronounce that last letter as “Zed” if you want to sound like a Kiwi). Later in life, after raising their family, the Tarawhitis had presided over the mission in Papua New Guinea, and then over the Auckland MTC. They were sitting with Sister T’s nephew and his wife, who reminded us that we had met her at the customer service desk of a Hamilton department store when we had to return an item. 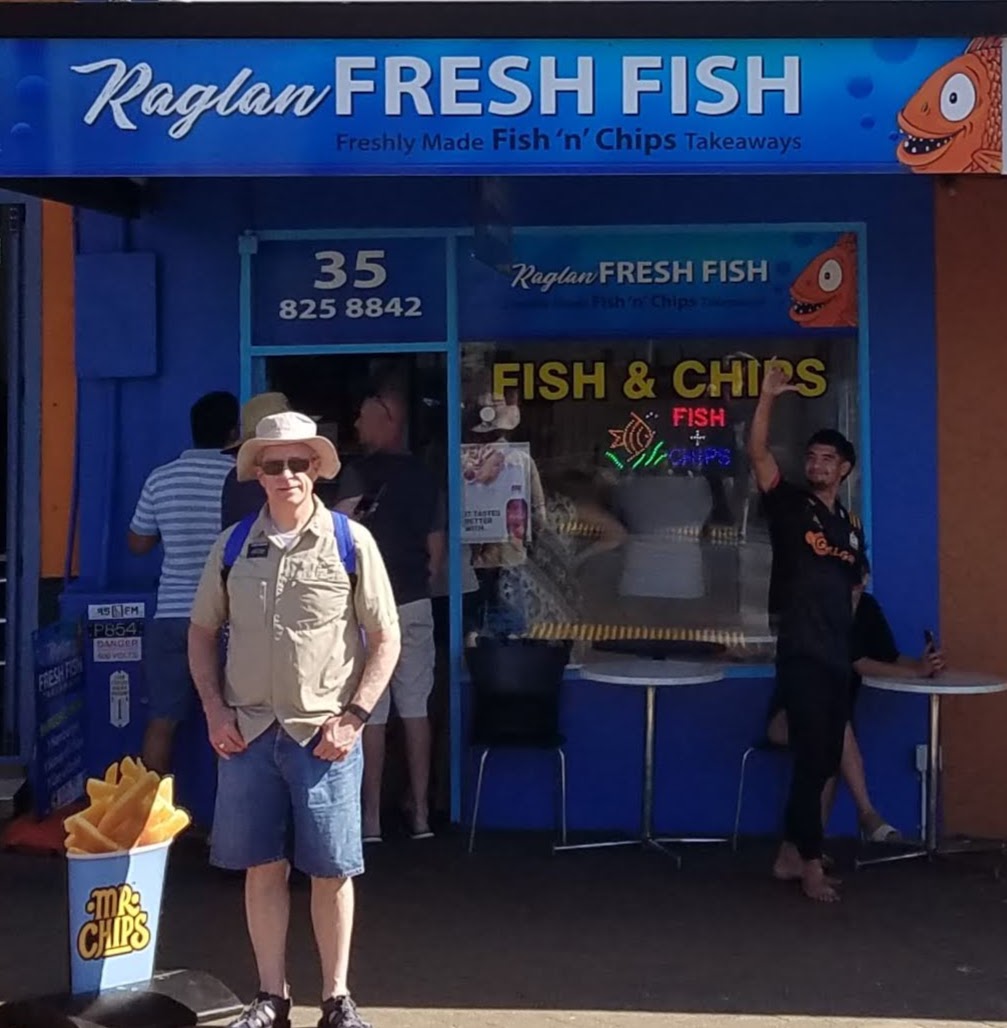 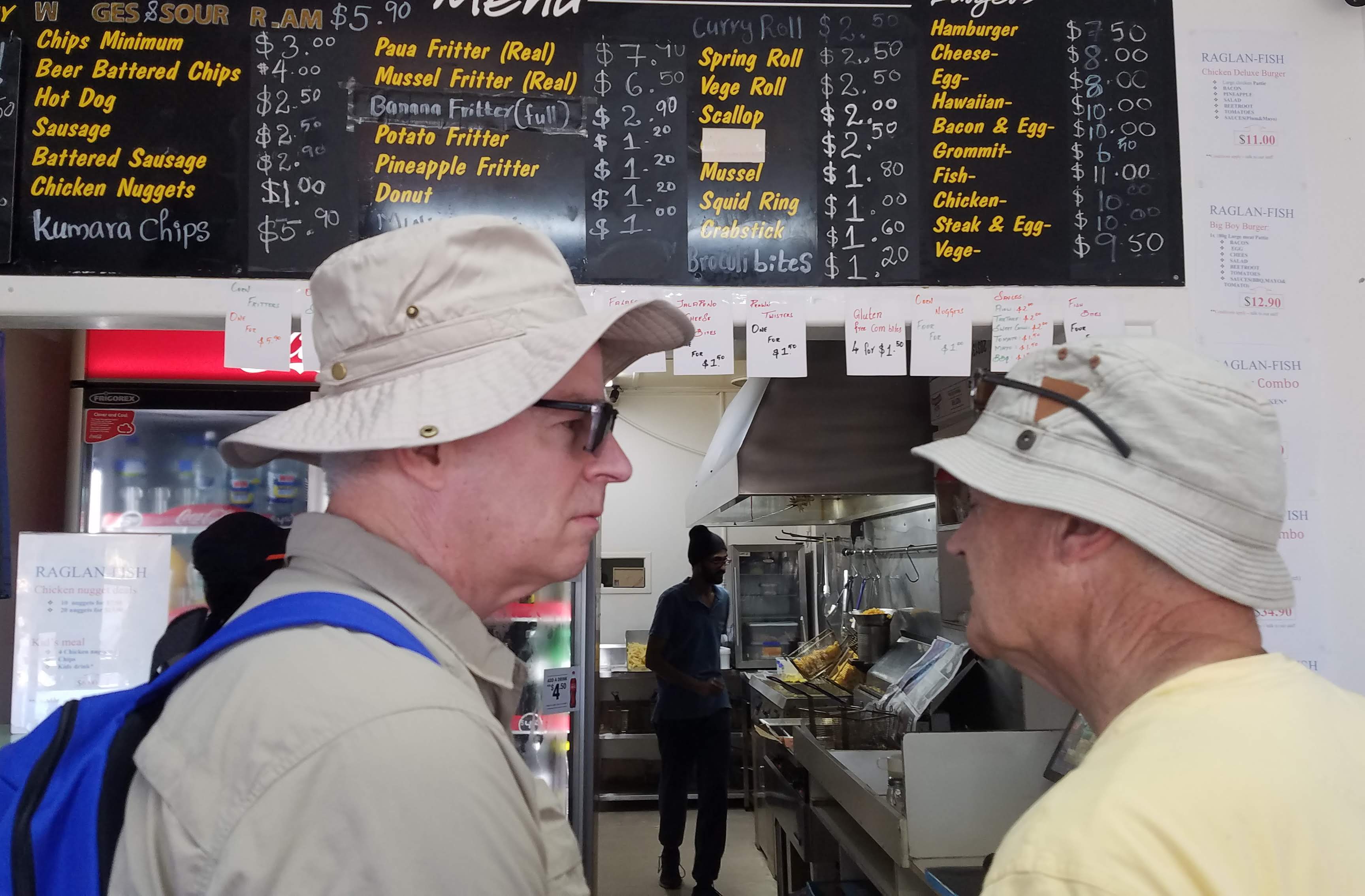 Michael and Barry discussing the menu

Although everyone we met kept offering us food, and it was hard to resist when someone put a grilled sausage, onion, and capsicum sandwich directly into your hand, we ate only enough to be polite, thinking about the superior fare Barry and Eva had told us to expect in town at Raglan Fresh Fish. “Some of the best fish and chips in New Zealand,” they had told us. Even though we cannot substantiate that claim, we have no reason to refute it: Fresh snapper and gurnard, lightly battered and crisply fried, with more chips made of freshly fried potato and kumara (a sweet potato sibling) than we could comfortably eat. Raglan Fresh Fish is a cash-only, strictly take-away joint, so we carried our paper-wrapped, grease-stained packages to a bench on the grassy, tree-lined median in the main drag through town, licking our fingers as we sat and ate with other satisfied customers. It was very good. It was also fun to walk through central Raglan’s small boutiques and art galleries after our bellies had reached capacity.

So that was Auckland Day. Is there also a Hamilton Day? A Wellington Day? A Christchurch Day? One can only hope.