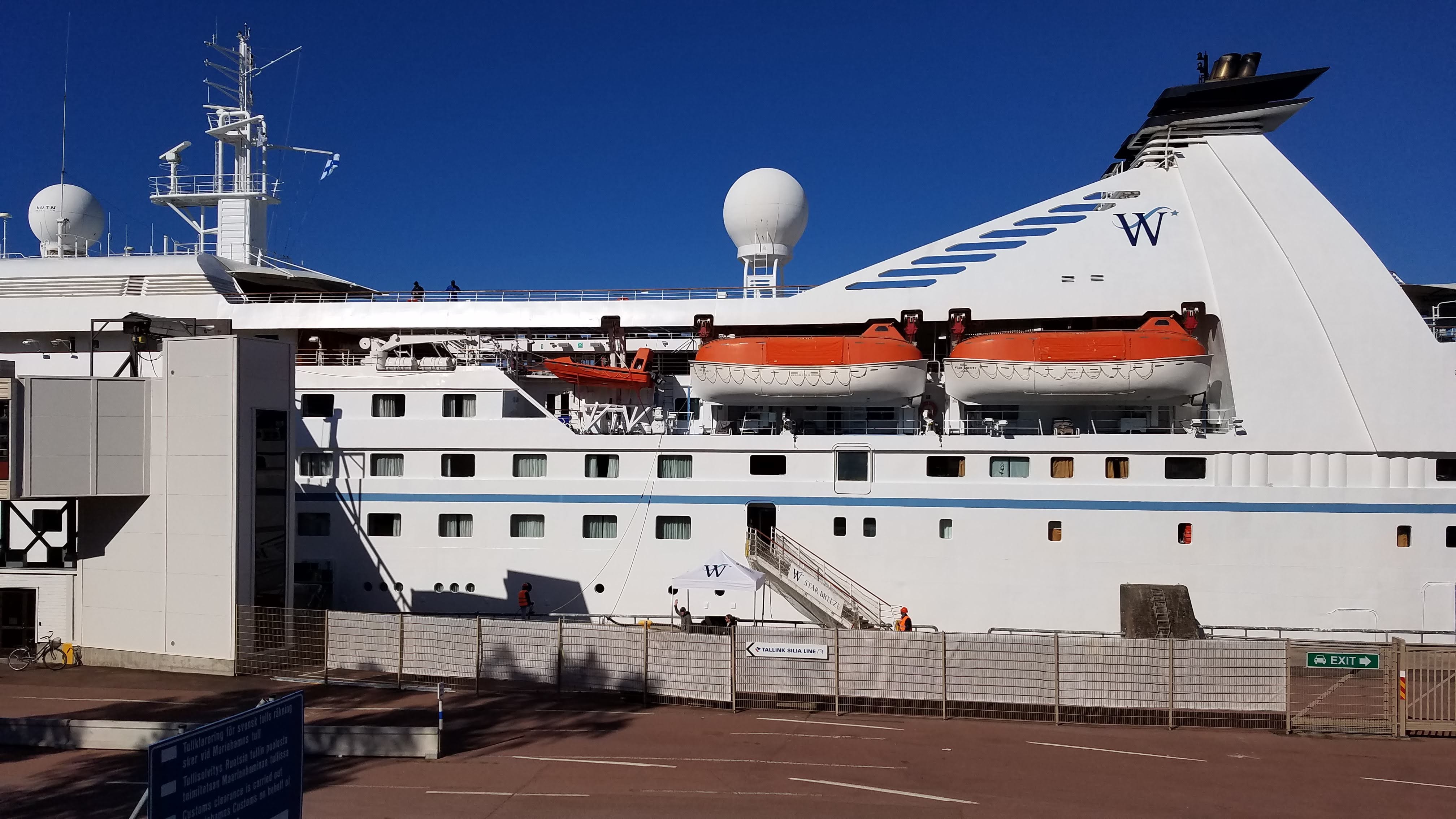 The Star Breeze in port

At 7:00 a.m. Eastern European time, we made port in Mariehamn. (To say the name correctly, you must pronounce every letter individually.) This picturesque town of about 12,000 is the capital of Åland, a group of islands about midway between Sweden and Finland. Åland is an autonomous territory within Finnish sovereignty, but the primary language of its inhabitants is Swedish. We had never heard of Mariehamn before learning that it would be one of the ports-of-call for this cruise, so Michael did some research to determine what attractions it has to offer. Cynical sources told us that the residents of the Åland Islands depend mostly on the sale of duty-free liquor to day-trippers from Stockholm for their livelihood, but summer tourism is an equally important source of income. 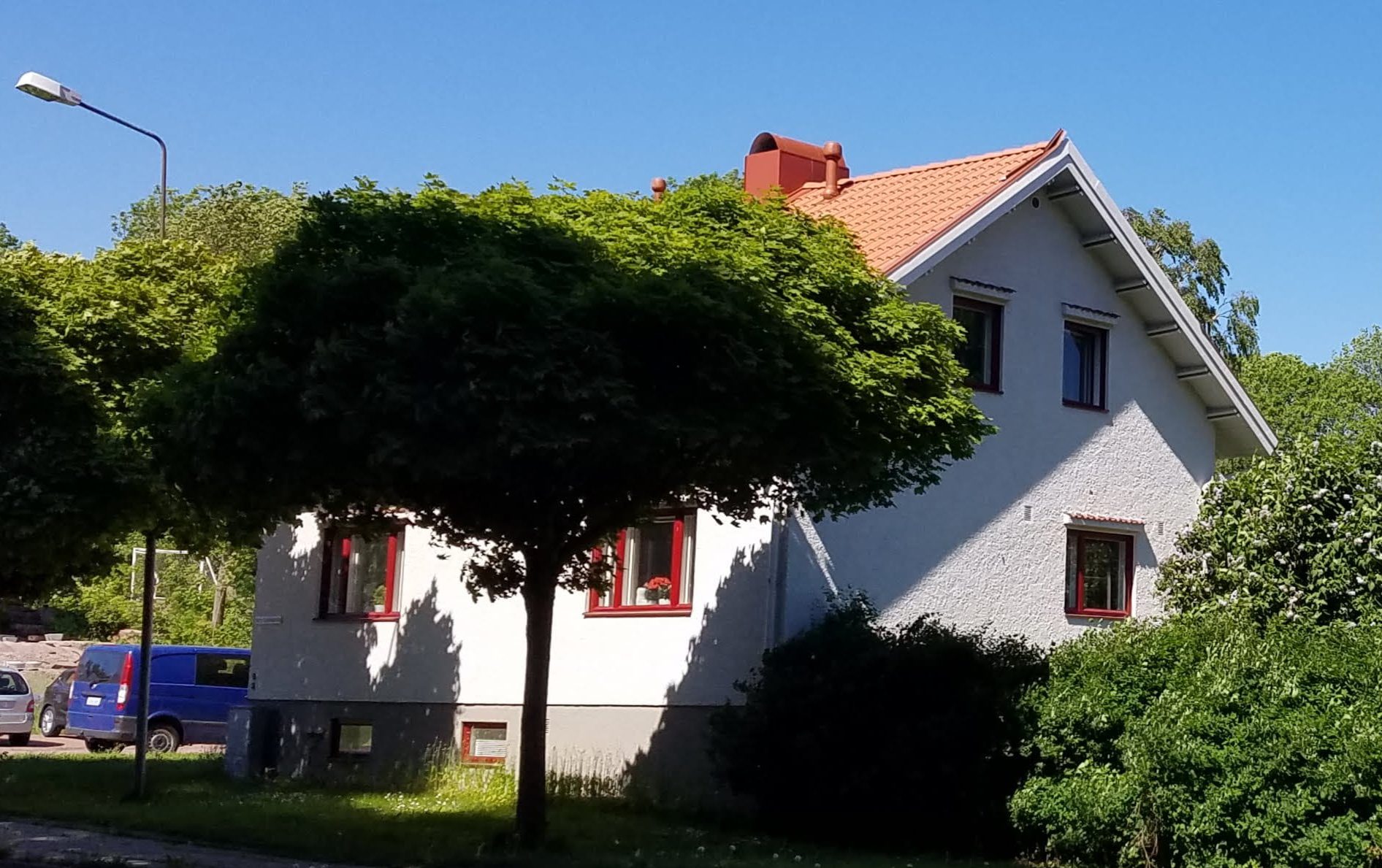 A typical house in Mariehamn 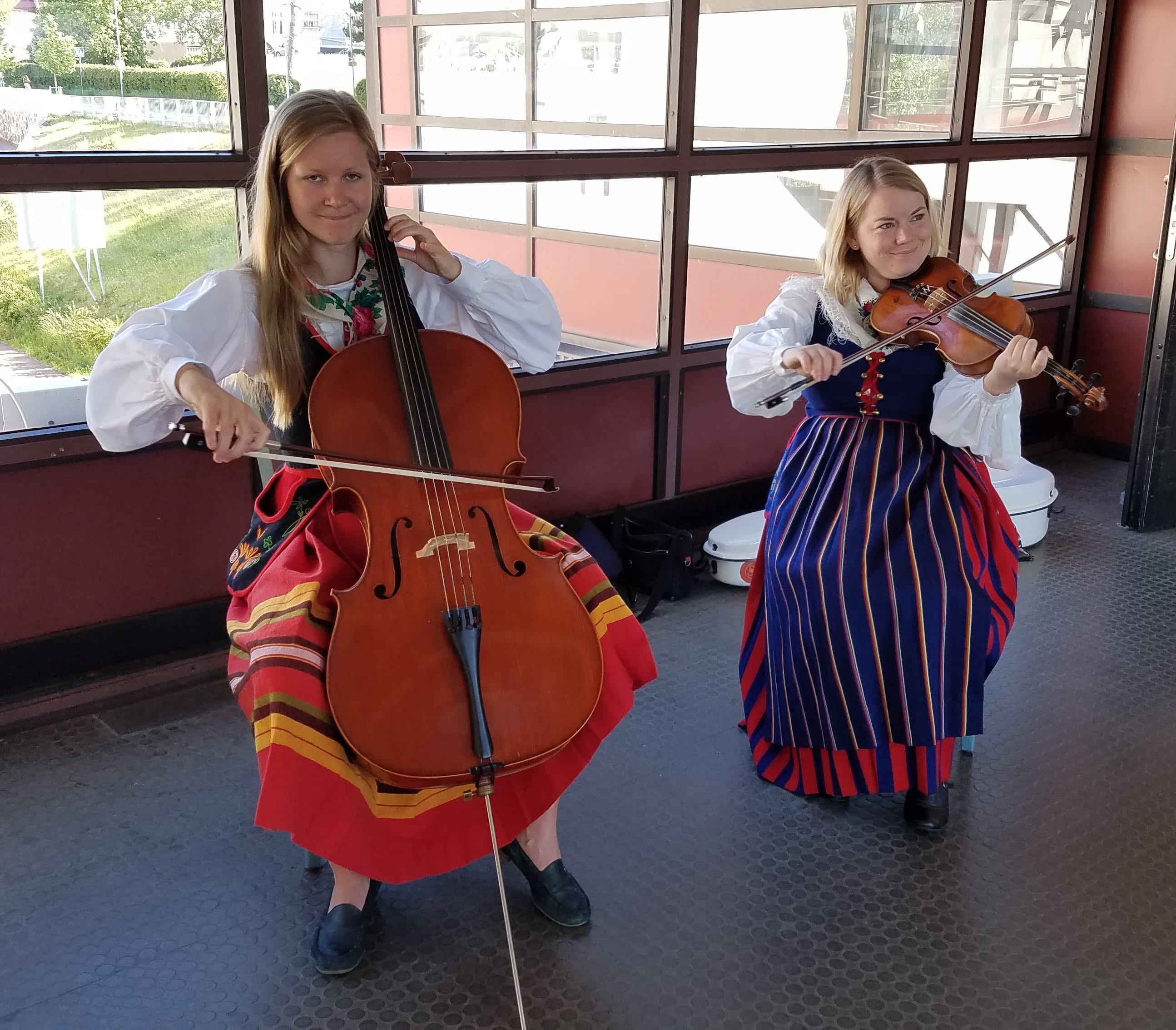 Local musicians serenaded us as we passed through the ship terminal

Mariehamn has a number of vacation cottages, small hotels, and cafes that cater to visitors who just want to relax, but besides a small local history museum and an even smaller maritime museum, there isn’t much to do. Most travel guides recommend touring Åland by bicycle, which sounded like just the way we’d want to spend a couple of hours on a Sunday morning—assuming the weather was cooperative.

Sculpture of a whale 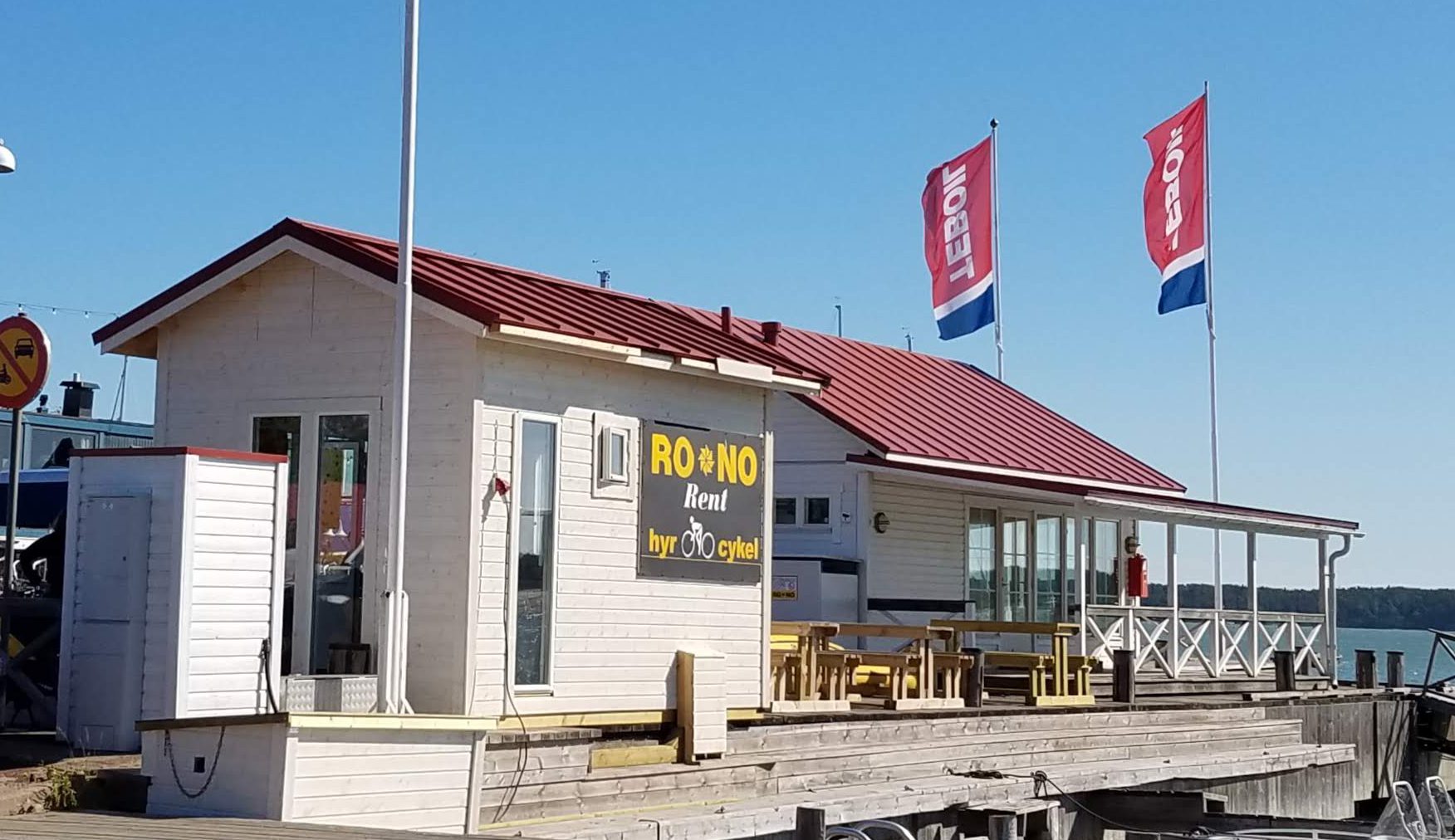 The Ro No bike rental shop

Because the Star Breeze is a relatively small cruise ship, we were able to dock at the ferry terminal in the narrow harbor on Mariehamn’s west side. A guidebook had indicated that the local bike rental shop opened at 9:00 a.m. on Sundays during the summer, so as soon as we finished breakfast, we and the eight other friends who had decided to accompany us simply walked down the gangway, through the terminal, and into the center of town, about fifteen minutes away. 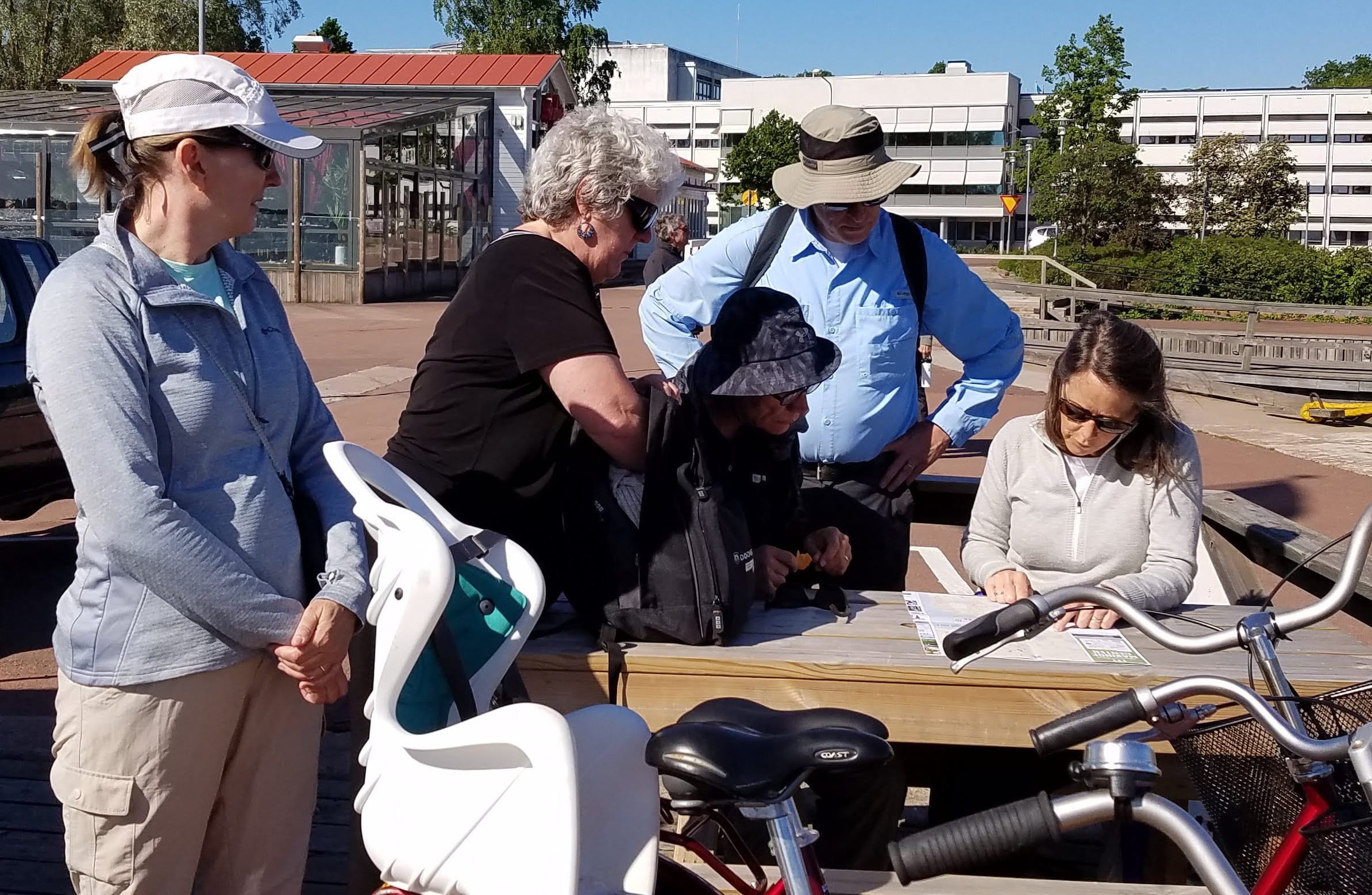 Filling out rental forms and planning our route

However, the guidebook failed to specify that “summer” would not begin until 15 June, so again we got to our destination more than a half-hour early. But the day was clear and breezy, just right for a cycling expedition, and the twentysomething proprietor of the bike rental arrived to unlock the door precisely at 10:00.

It took another half-hour for all of us to fill in forms and sign waivers so we could rent the bikes, so it was 10:30 a.m. when we finally got on the road. 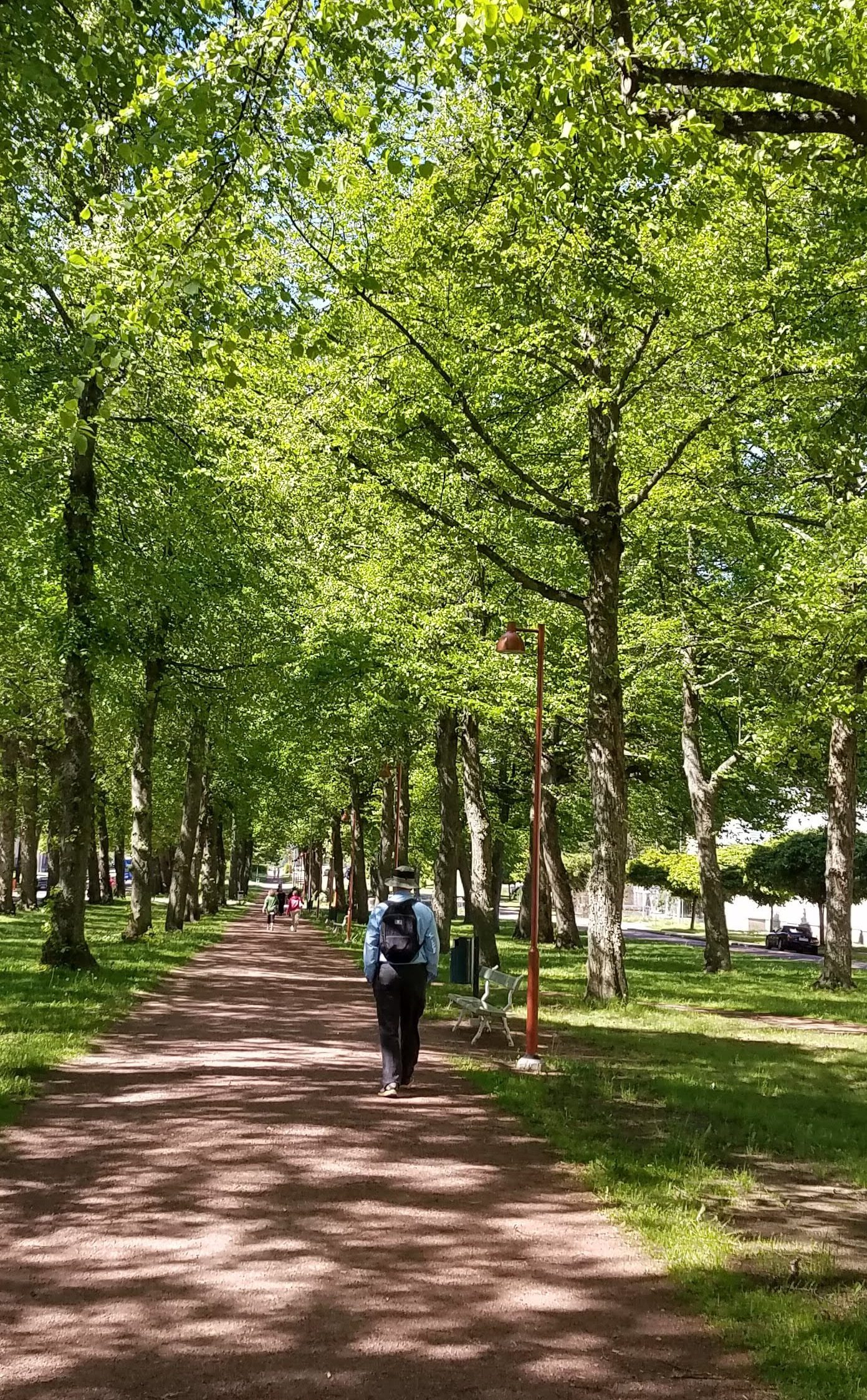 The Esplanade in central Mariehamn

Thanks to Google Maps, Michael had planned a route that would take us across multiple scenic islands and causeways to Järsö, about 10 kilometers south of Mariehamn, but that plan had been dependent on leaving the bike rental by 9:15. In addition to starting late, we lost more time getting out of town because we had blindly followed some neighborhood bike trails instead of sticking to the roads. Tony helped us get back on track because—daredevil that he is—he had decided to rent a Vespa instead of a bicycle, so he became our scout, speeding ahead to ascertain where we should turn to pick up the route to Järsö.

Cyclists on Styrsö (missing Eric, who took the photo)

After we crossed the first bridge onto the islet of Styrsö about 11:30, we stopped for photographs and took stock of how far we had come, how far we still had to go, and how long it would take to get back into town. The consensus was that we’d better turn around and head back into Mariehamn rather than risk being left behind when the Star Breeze sailed at 2:00. (Also, we didn’t want to miss lunch onboard.) Michael was disappointed that we had not been able to experience as much of the Åland archipelago as he would have liked, but feeling that he had achieved at least part of his goal, he agreed with the decision to turn back. Järsö will have to wait for another time.

Somehow, the chain on Ed’s bicycle jammed on the return trip, making it necessary for him to carry the bike about half a mile before someone noticed that he had fallen behind and went back to help him. 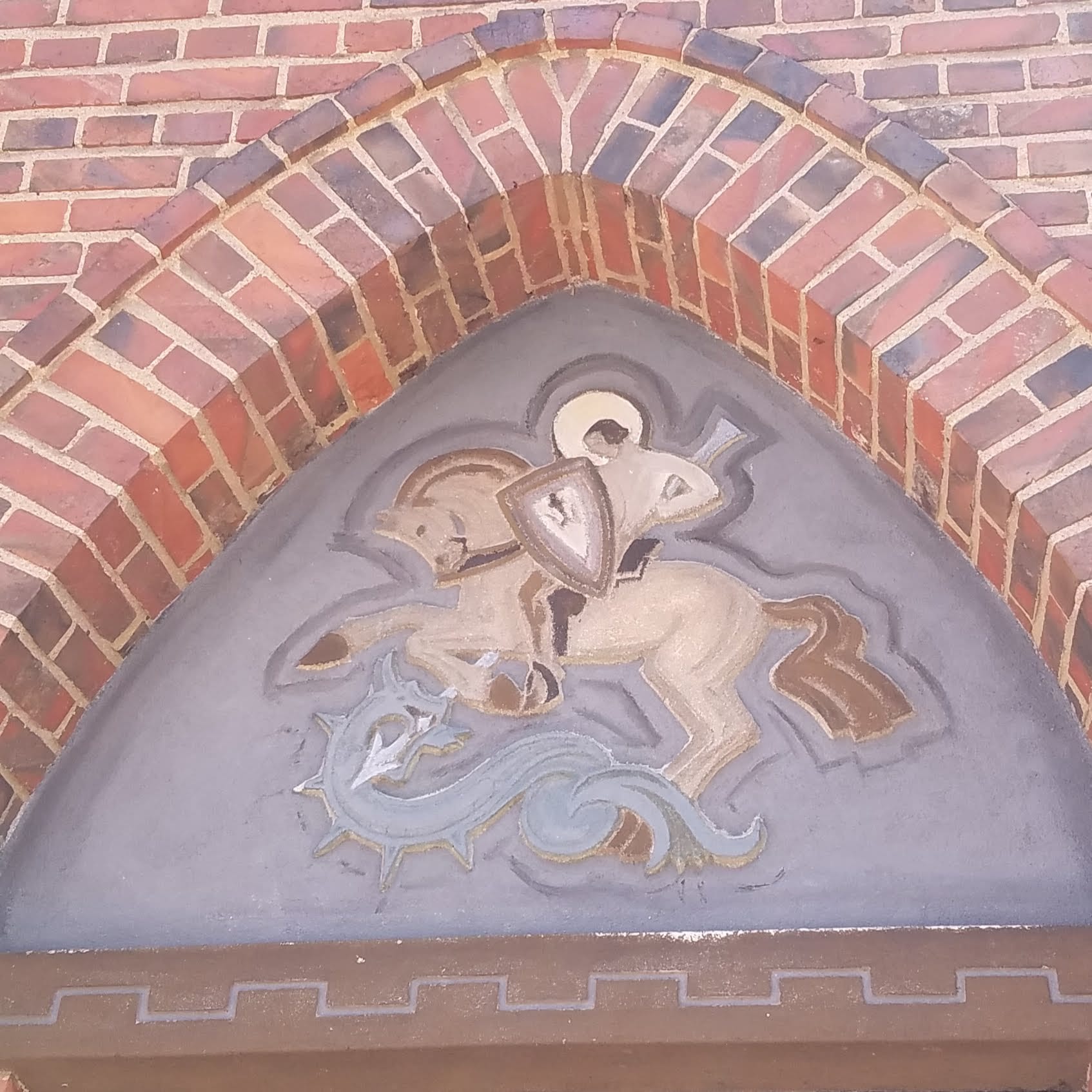 This Saint George looks more modern than most

By the time we had assisted him, returned all the bikes and walked back across town to the wharf, it was 12:45, but we boarded the ship in plenty of time for the lunch buffet. The roast lamb at the carving station looked good but proved too tough to enjoy; the braised beef was much better. After lunch, Nancy took the opportunity to catch up on her laundry while Michael made an attempt to catch up on blog entries.

Because we would be spending the rest of this Sunday aboard ship, this afternoon we organized a devotional meeting for our own group of 22 travelers. All of us are members of the Church of Jesus Christ of Latter-day Saints, and all but two have attended the same ward in Montgomery, Ohio, at one time or another over the past twenty years. Half of us are still part of that congregation; the other half no longer live in Ohio, but we cherish our shared history and our bonds of friendship remain strong.

As Latter-day Saints, all of us have been considering how to respond to a new Church-wide emphasis on gospel study outside of formal church meetings. In January, the Church reduced its regular Sunday meeting schedule from three hours to two, encouraging individuals and families to spend more time reading scriptures and discussing gospel principles at home instead. To facilitate home-centered learning, the Church introduced a set of manuals and online study aids called Come, Follow Me. This year, the Come, Follow Me curriculum is focused on the New Testament. Each week everyone studies the same set of scripture passages at home, and then when we meet at church on Sundays, we can share our thoughts and insights about those passages with one another. 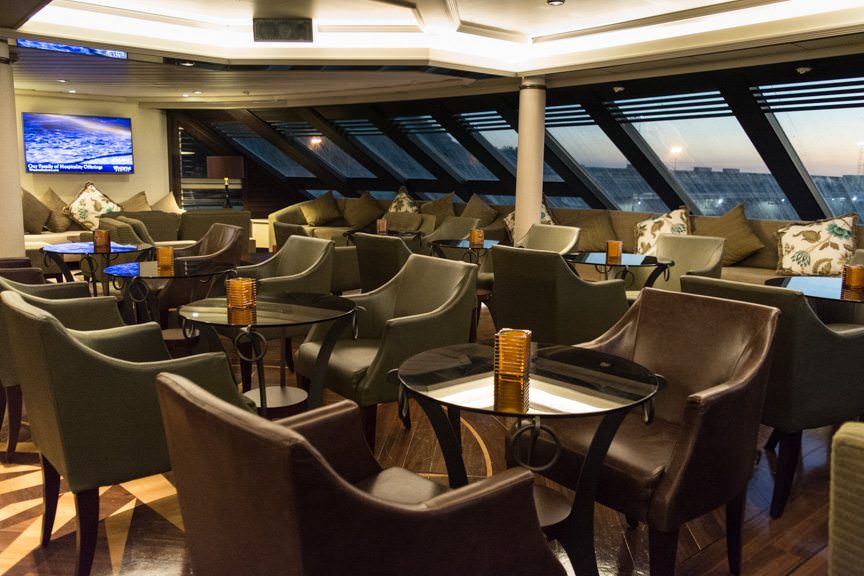 The Star Breeze’s Compass Rose lounge was empty this afternoon because the bar was closed, so (with permission from the ship’s event scheduler) we rearranged some of the soft chairs into a circle for our devotional discussion. 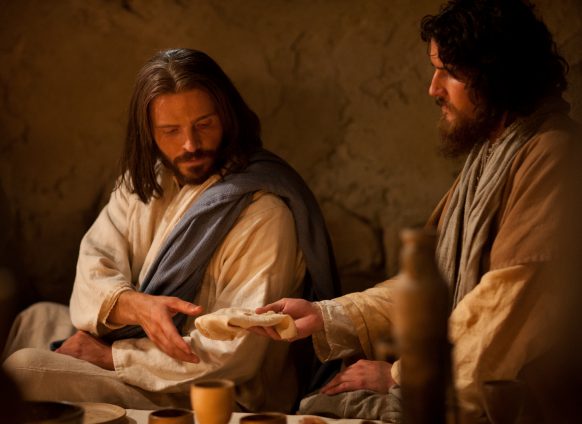 The text for this week’s Come, Follow Me lesson is John 13-17, which includes the account of the Last Supper, at which Jesus commands his disciples to love one another and “be one,” and promises to send the Holy Ghost to comfort them when he can no longer be with them in the flesh. We spent a spirit-filled hour sharing ideas and experiences about love and unity, and about the influence and power of the Holy Ghost in our lives. We are truly grateful for the love and unity that exists among this group of friends, and for the ways they have spiritually strengthened us and our children during the years we have known each other. 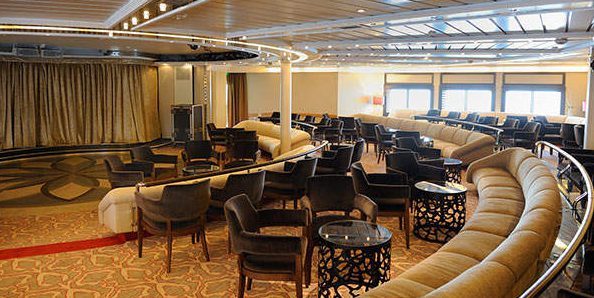 Later, we attended the Captain’s Reception in the Auditorium, where the ship’s officers and cruise managers were introduced. For this gathering, the LDS group was scattered throughout the audience. We made the acquaintance of the couple sitting next to us, who are from Hong Kong. Don is an orthopedic surgeon who grew up there; Cheryl was raised in the States, but has lived in Hong Kong for 25 years—and admits that she doesn’t speak a lick of Chinese. Most of the passengers on this cruise are American, but the officers and managers of the Star Breeze hail from all over the world: the captain is Serbian; department heads come from England, Poland, Bulgaria, Slovakia, Ukraine, Philippines, and Vietnam. Crew members also represent many nations, although most seem to come from Indonesia, including Iyse, the housekeeper for our room. 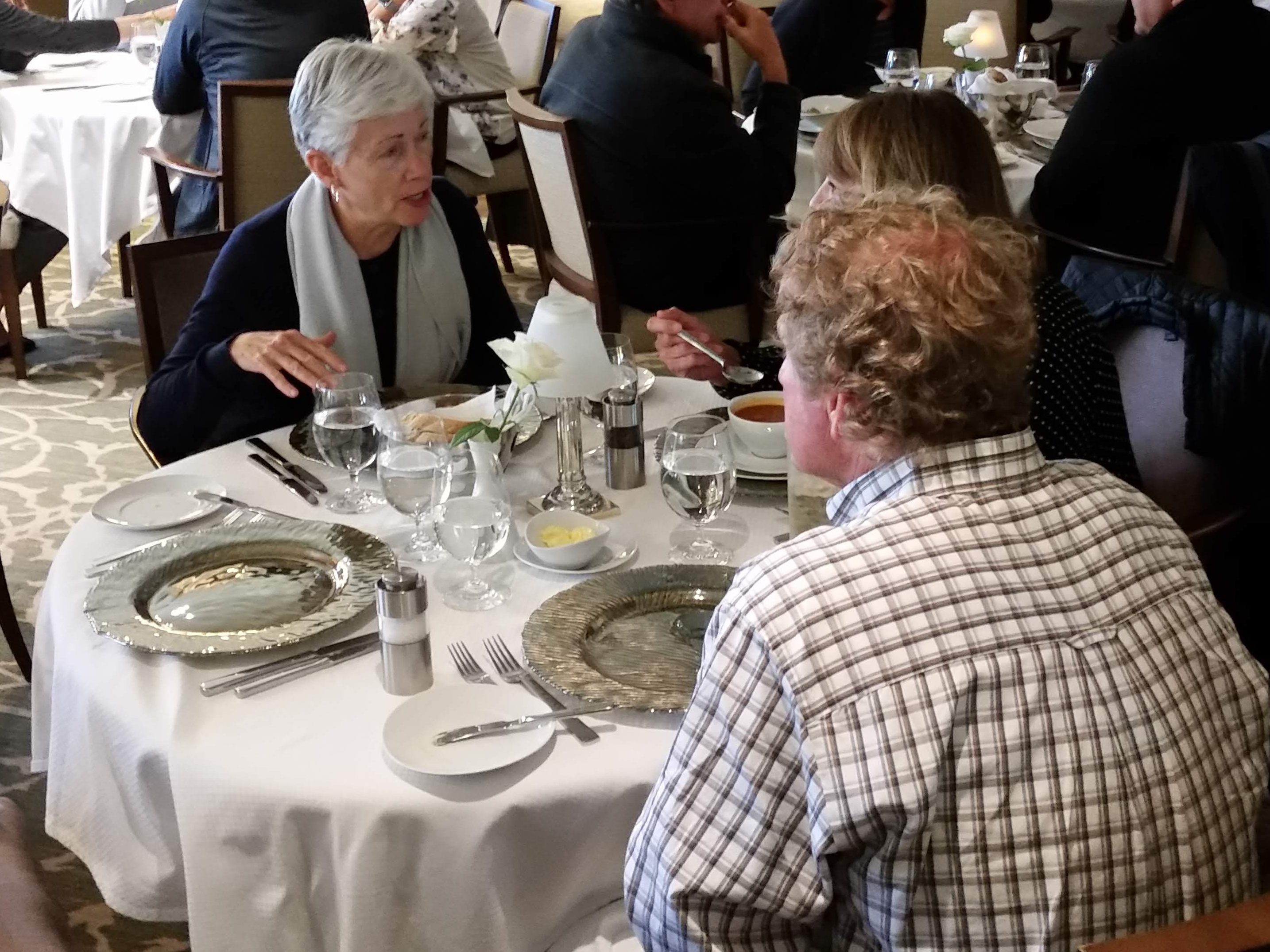 Dinner with Jim and Carol

Nancy chose Beef Wellington for her main course and strawberries with cream for dessert; Michael had duck a l’orange and a chocolate soufflé. So far, the food on this cruise generally has been good, but not outstanding.

Tonight we had dinner in the AmphorA dining room, sharing a table with Jim and Carol. For the first course, Nancy had a dumpling stuffed with flavorful arancini mushrooms; the other three had tomato-basil soup.

Nancy’s earworm through the evening has been a song called “Night Waltz” from A Little Night Music by Stephen Sondheim. The setting for the show is a midsummer house party at an elegant estate in Sweden, circa 1900. Take a listen by clicking on the link above, and consider why our current surroundings keep bringing this particular melody to her mind.

The vespers ring,
The nightingale’s waiting to sing.
The rest of us wait on a string.
Perpetual sunset
Is rather an unset-
Tling thing.

The sun won’t set.
It’s fruitless to hope or to fret—
It’s dark as it’s going to get.
The hands on the clock turn,
But don’t sing a nocturne
Just yet. 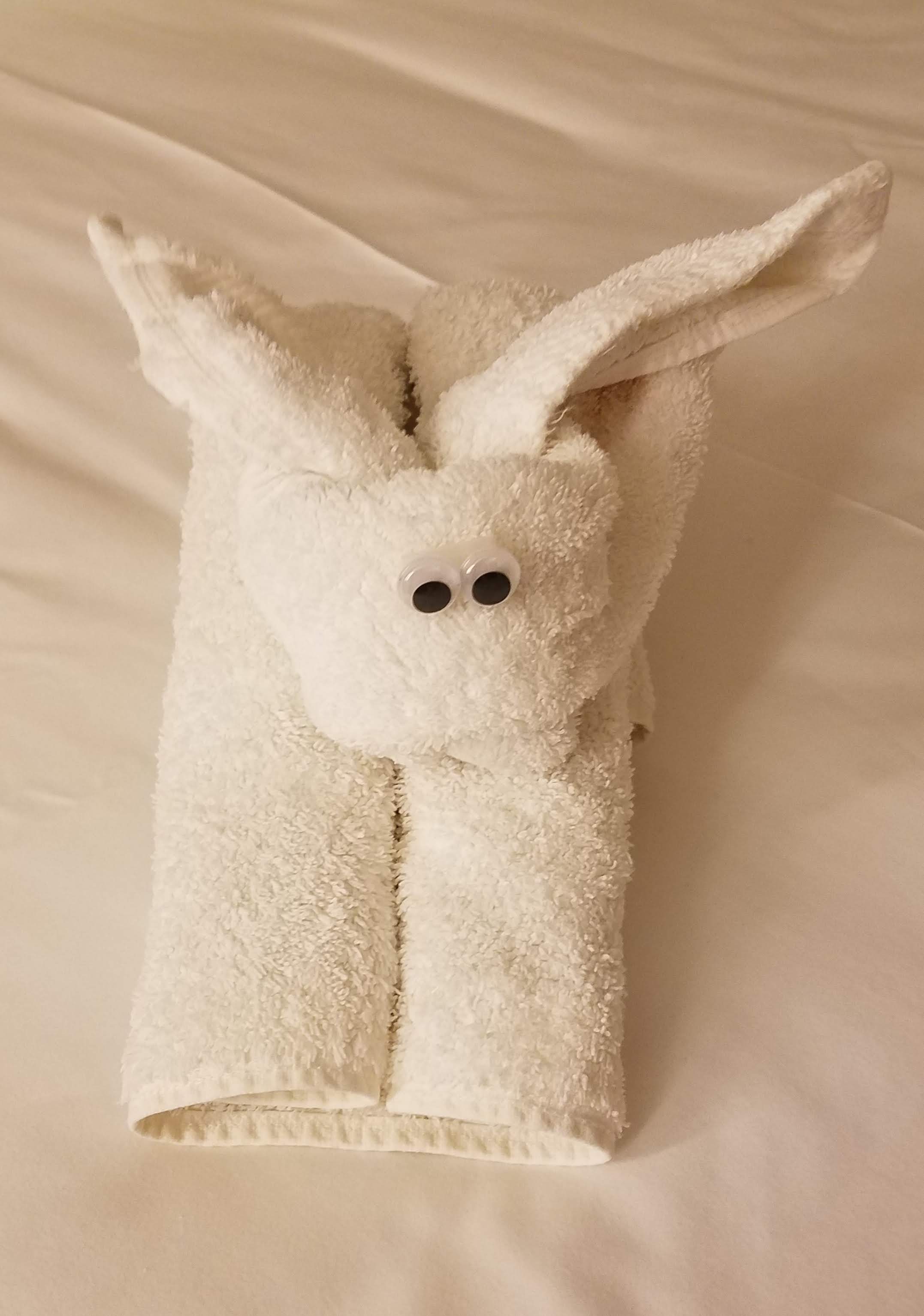 We found this rabbit waiting on our bed

Perpetual sunset is not the only unsettling thing we’re dealing with at the moment. The captain had told us to expect five-foot swells tonight, and we had begun to feel the boat rock as we were finishing dinner. When we got back to our cabin, we could clearly see whitecaps breaking outside the window. Both of us feel a little queasy, so we’re pulling the blackout drapes shut and going to bed.