Delta One to Paris

Delta One to Paris 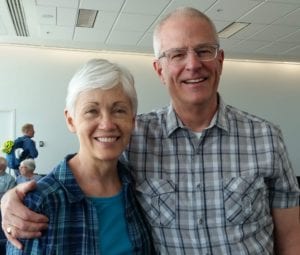 Nancy and Michael at CVG

We were ready to go well before Dani’s white Suburban pulled into our driveway about 1:20 p.m. By now we have packed for trips often enough that once we had checked weather forecasts for Prague and the Baltic region, there were few decisions to be made. Or at least, that’s Michael’s take on it. Nancy always takes longer to decide which color palette she needs to take, and that depends on whether we plan to do a lot of outdoorsy activities (for which her clothing and shoes lean toward black and tan) or in-town sightseeing (navy, green, and aqua). For this trip, the forecasts indicated that we’d better take a lot of lightweight layers. Both of us have developed personalized systems for folding clothes and organizing equipment, placing everything into various pouches, and finally packing each pouch into our suitcases. 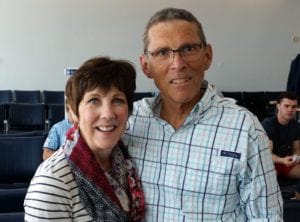 Dani had been conscripted into taking us to the airport not only because she drives a vehicle large enough to accommodate four adult passengers and all their luggage, but also because she happens to be Nan and Keith’s daughter-in-law. Mid-day traffic was no heavier than usual, so we made it to the airport in plenty of time for an unhurried check-in and security screening. 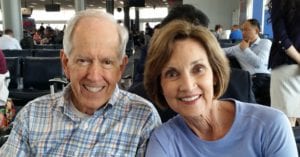 We passed Tony waiting in line to sign up for Clear (the screening service based on biometrics that expedites passage through airport security and customs), which happened to be available at CVG for the first time today. His wife Katie, along with Budge and Linda, were waiting just on the other side of the TSA checkpoint. At the gate, we settled into a bank of chairs, every now and then checking the upgrade lists to see which of us might be lucky enough to rate flying in a little more comfort.

Two dozen fairly large young men also were waiting in our gate area. They turned out to be students from Moeller High School (our local Catholic boys’ academy), heading to Rome for their senior trip.

Delta Airlines apparently had bet that a few passengers from the Moeller group would drop out before departure day, but they didn’t, so our flight from CVG to JFK was now over-booked. Indeed, when we had checked-in online, we were notified of the over-booking and given the opportunity to bid on a voucher for another flight. Michael usually considers whether it would be possible (or worth the effort) to adjust plans to earn a voucher, but this time he simply clicked through—as did the rest of our group.

However, as we sat in the waiting area and listened while the voice of the gate agent trying to persuade passengers to change flights became more agitated, and voucher offers gradually increased from $200 to $1000 per person, Michael decided that it was time to get up and talk to the agent. He quickly assuaged our immediate worry (could we get to Prague in time to meet the rest of our group?) by explaining that we could fly through Paris instead of New York and arrive 30 minutes before the flight from JFK. By this time, Tony also had stepped up to the desk to eagerly inquire about getting those vouchers. After ascertaining that Delta would give them to four of us even though they needed to vacate only three seats, and after some additional negotiating with a very nice, helpful gate agent, we (along with Tony and Katie) were now booked for the Cincinnati-Paris-Prague flight in Delta One class, and each of us has a $400 voucher to use on a future Delta flight. 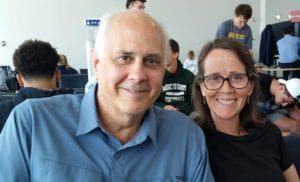 Thus we waved goodbye as Nan, Keith, Budge, Linda, and the Moeller boys boarded the 3:20 p.m. flight to JFK, and then headed toward The Outback to use our meal vouchers while we waited for the 6 p.m. flight to Paris. None of us was very hungry, but we decided that we’d better get a little something to tide us over until dinner was served on the later flight. Nancy chose grilled asparagus and a baked sweet potato from the Sides menu; Michael ordered a cup of chicken tortilla soup, a small house salad—and ice cream, of course. 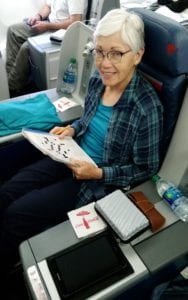 Nancy in her Delta One space

Katie’s initial reaction to our Delta One seats was: “Ooh! Look! So many extra spaces to explore!”) Once we got past the “ooh!” factor, however, we decided that the most distinguishing features of Delta’s first-class experience are (1) motorized reclining seats that allow occupants to enjoy being completely horizontal, (2) cozy down comforters, and (3) the presentation and quantity of the food. (Note that the latter is spelled with an nt rather than an l in the middle.) Our meal began with a sampling of appetizers: baby gem salad (a small head of romaine sliced in half and topped with carrot and radish shavings), shrimp cocktail, and corn chowder (good, but undistinguished). For the main plate, Nancy chose the beef tenderloin, and Michael the chicken with tzatziki sauce. Sadly, both were overcooked—but the green beans were good. A bunch of grapes and a couple of different cheeses preceded dessert: mini carrot cakes with a cheesecake layer, or ice cream drizzled with chocolate and caramel sauce. The best thing about dinner was that the roll had not been chilled along with the butter.

Before trying to sleep, both of us selected movies to watch. Michael enjoyed Ryan Gosling’s portrayal of Neal Armstrong in First Man, but Nancy’s attempt to take in Slumdog Millionaire was foiled by headphones that—despite padding and fancy “woody-wagon” side panels—failed to cancel ambient noise well enough allow her to understand the Hindi-accented dialogue. She gave up after only a few minutes and took out her Kindle. A YA novel by E. K. Johnston called The Story of Owen: Dragon Slayer of Trondheim provided perfect light reading for a trip to Scandinavia—even if the Trondheim of the title turned out to be in Canada rather than in Norway. 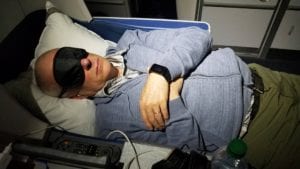 Though better than those in coach, Michael’s seat was too narrow to feel like a bed even when completely reclined. Eventually settling into a side position that wasn’t too bad, he was able to slip in and out—mostly out—of wakefulness for the next three or four hours. Nancy finally put her book away at what would have been midnight in Cincinnati and motored into recliner mode. As a narrower person than Michael, Nancy found the bed quite comfortable—except that the air temperature kept fluctuating, so couldn’t decide whether to stay under the down throw or not. She was able to lose consciousness for the last hour or two, but not enough to feel that she truly had slept.

The wakeful were offered breakfast about an hour before landing, so Michael chose the granola with yogurt; Nancy roused herself just in time to order and consume a caprese quiche before the service ended.

As we made our bleary-eyed way into Charles de Gaulle Airport, we wished we had accepted the $1000 vouchers and stayed in Comfort+ instead of negotiating for Delta One. We decided that the upgrade had not been worth the difference because even though the reclining seats were comfortable, they had not made sleep any easier—and we could have gotten a couple of extraordinarily good meals with that extra $600. Next time, we’ll know better.