According to Fodor’s New Zealand, “Hamilton is a city you can miss if time is tight.”

We who now live in Hamilton have decided that Fodor’s advice to tourists is fine with us, if it means that we are more likely to meet real people in real-life situations than hospitality-industry workers putting on a show. But we are discovering that Hamilton has some legitimate attractions that even tourists on tight schedules (pronounced “shed-yules”) might find worth their time.

One of those attractions is Hamilton Gardens, a 135-acre public park established along a bend in the Waikato River south of town that during the 1960s had been the site of the city’s main rubbish dump. Prior to that, the land had been used variously as a sand quarry, a rifle range, a go-cart track, and a dog-dosing strip. (We had to look up that last one: it’s a place where dogs were “dosed” with medication during the 1970s to prevent the spread of a serious tapeworm infestation.) Not the most auspicious history for a public garden, which makes the site’s current incarnation as a place of beauty all the more wondrous.

The City of Hamilton was not content to simply create a nice green space for its citizens to enjoy, but envisioned the Gardens as an opportunity for public education as well. The area is divided into three sections. The largest is devoted to community activities and includes open recreation fields, a children’s playground, a picnic ground, a small event center, a historic cemetery, and even a small beach on the river. The next is an area for special horticultural exhibits, and finally there are the Enclosed Gardens, which comprise landscaped spaces with different themes (e.g. the Japanese Tea Garden and the English Tudor Garden) as well as kitchen gardens designed to teach visitors about sustainable food production.

We first visited Hamilton Gardens after lunch on a fine Sunday afternoon, along with many of our fellow Hamiltonians. When we arrived, we noticed signs pointing toward a special lily show, so of course we had to go see it. Stepping through the door of the community pavilion, we felt like we had stepped back in time to the kind of flower show where the Dowager Countess of Downton Abbey had displayed her finest blooms—and expected to win first prize even if someone else’s specimen was bigger and better. 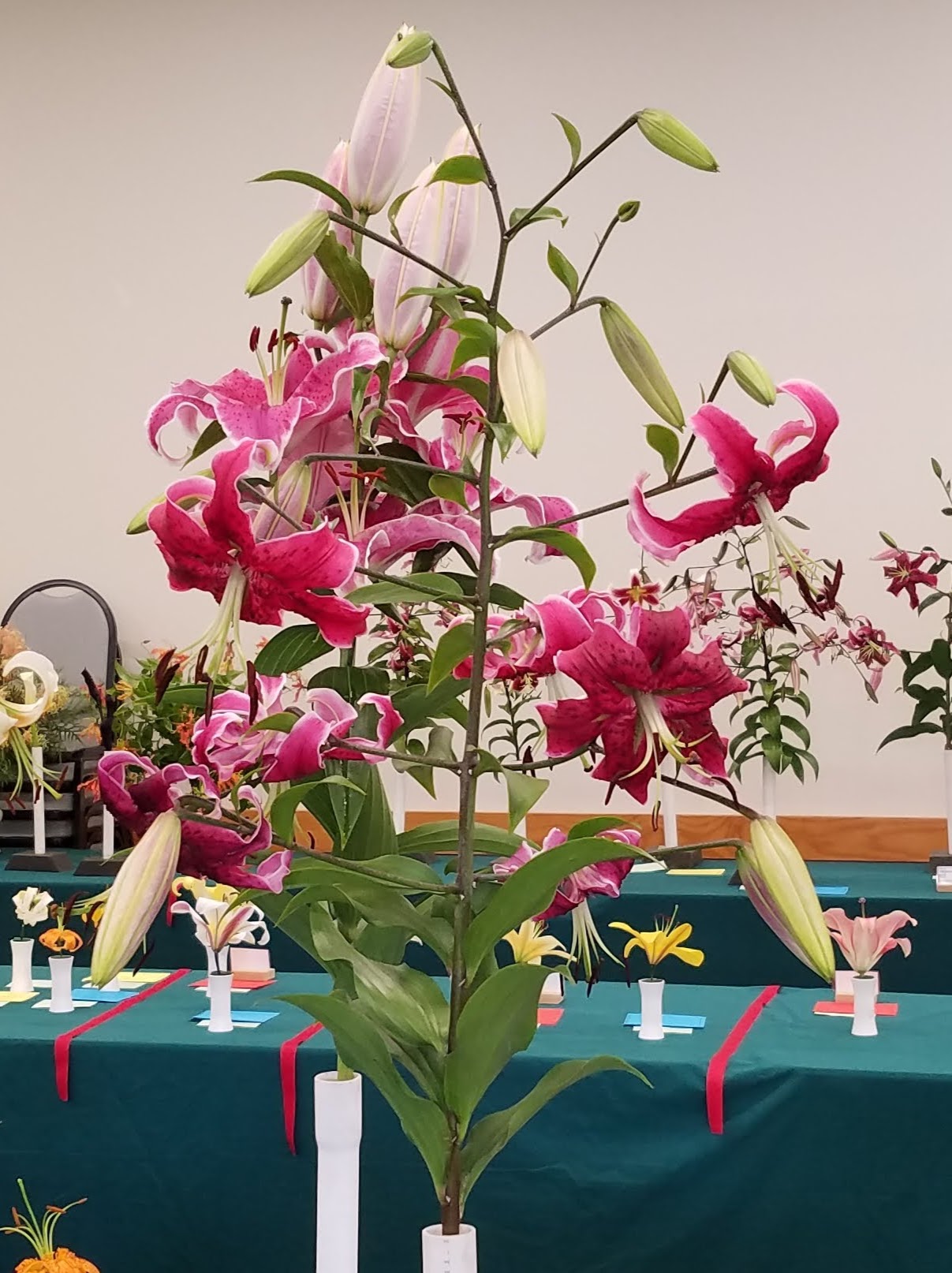 The sweet scent of lilies was almost suffocating, but we enjoyed inspecting each entry and trying to determine what criteria the judges had used to award ribbons in the various classes. We may be rank amateurs when it comes to horticulture, but it was easy to see why their growers considered these lilies prize-worthy. 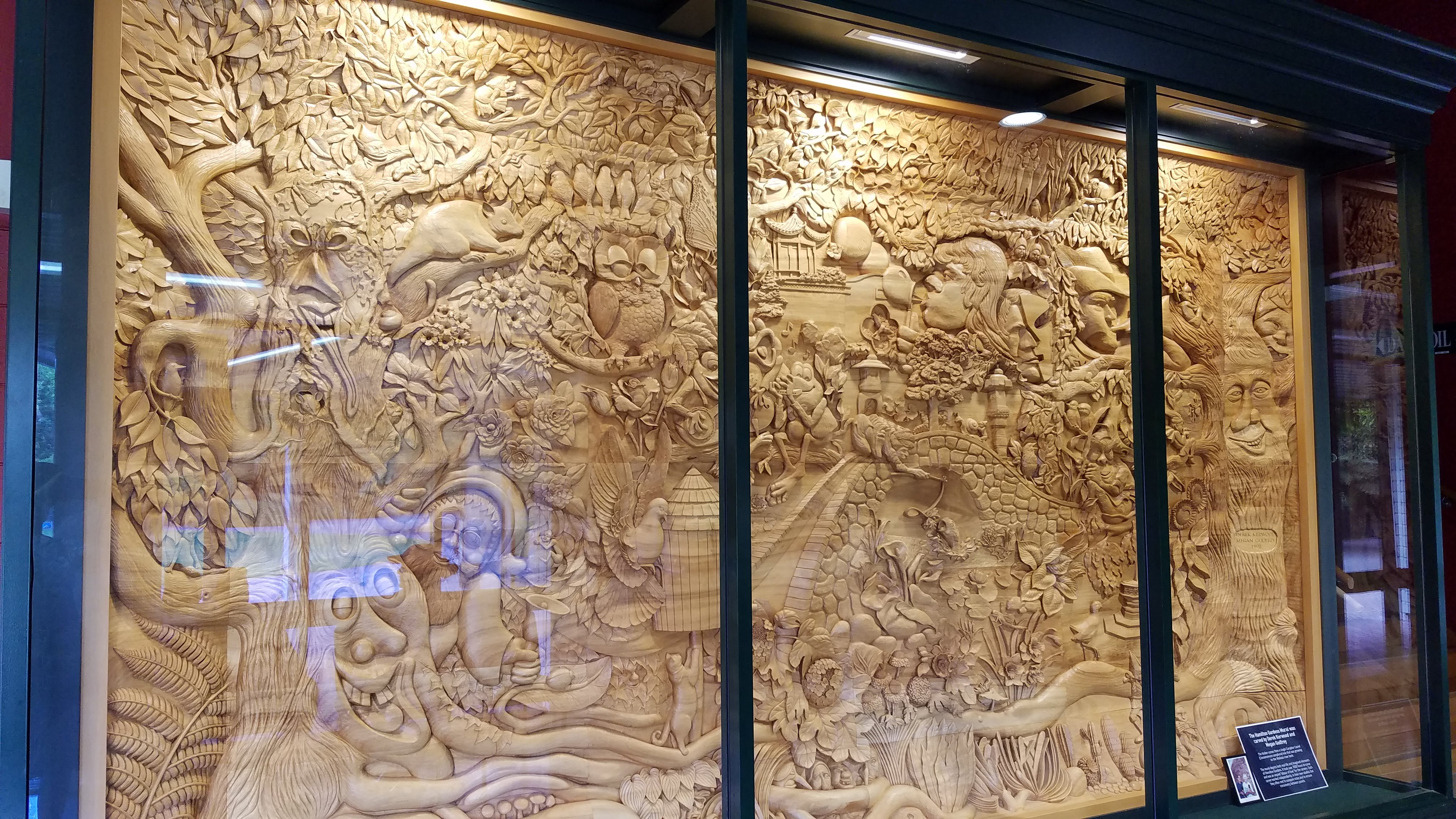 This large, whimsical wood carving is on display in the community pavilion

From the lily show in the pavilion, we entered the Enclosed Gardens and spent the remainder of the warm afternoon wandering from one to another. 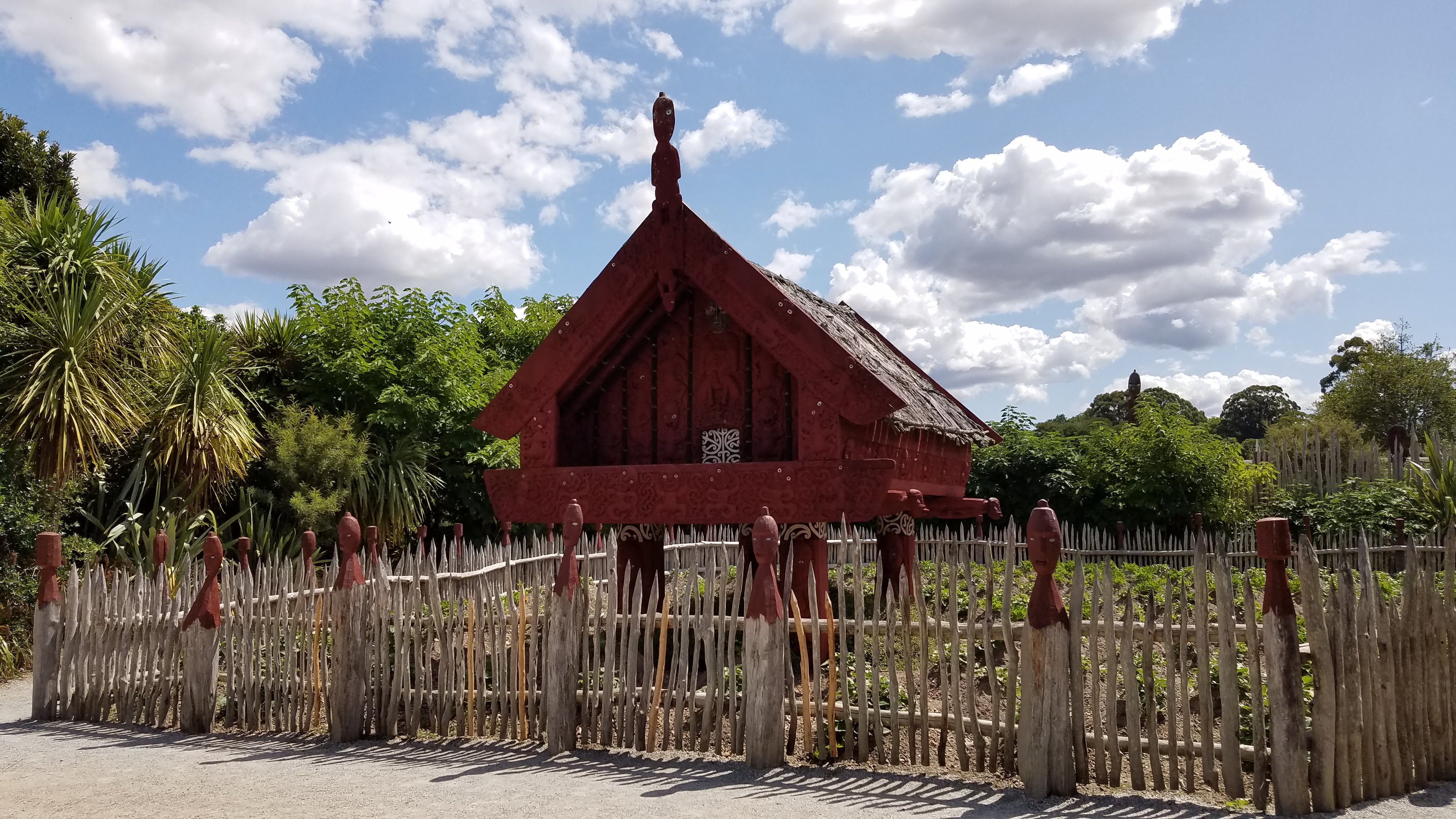 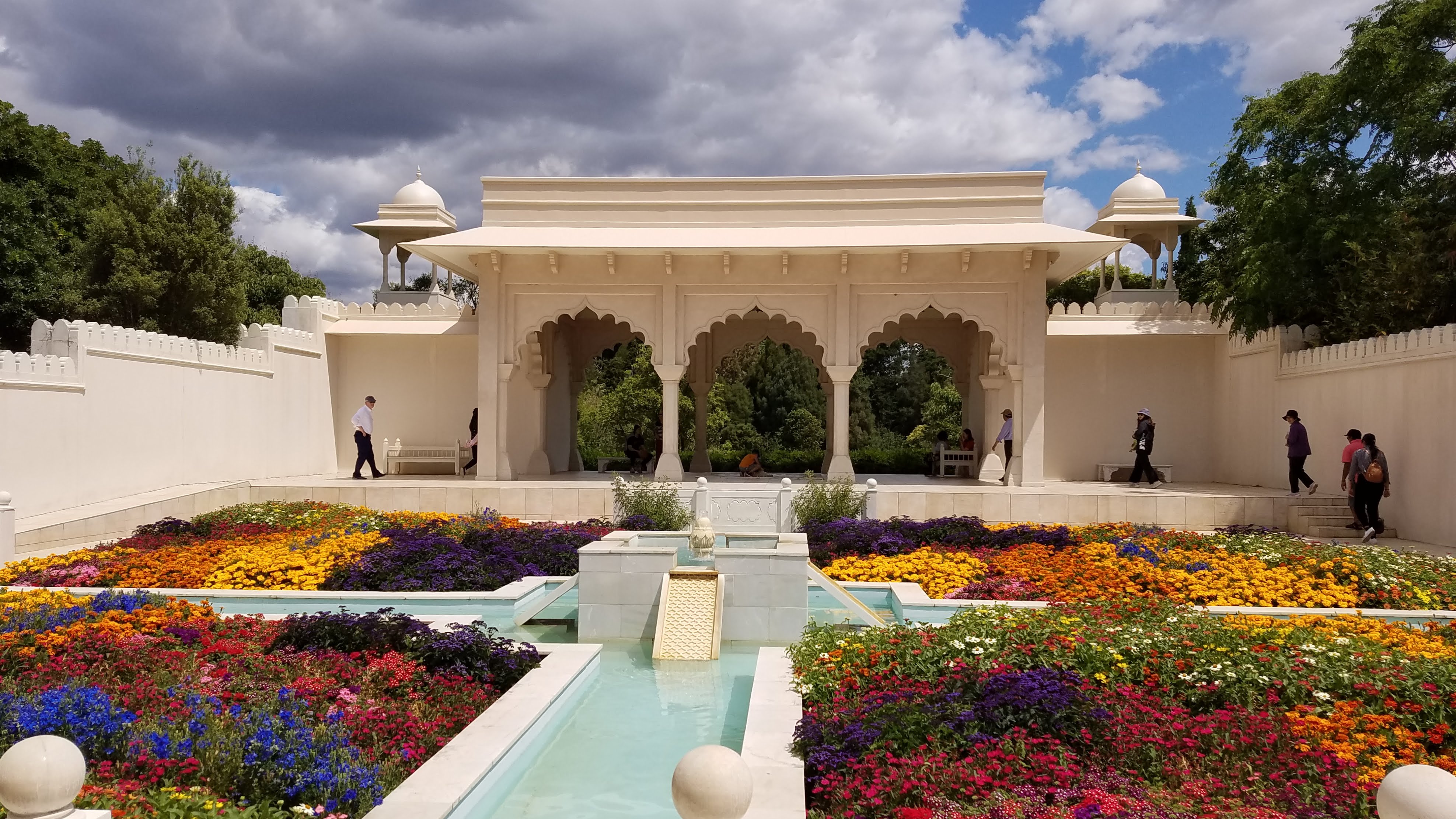 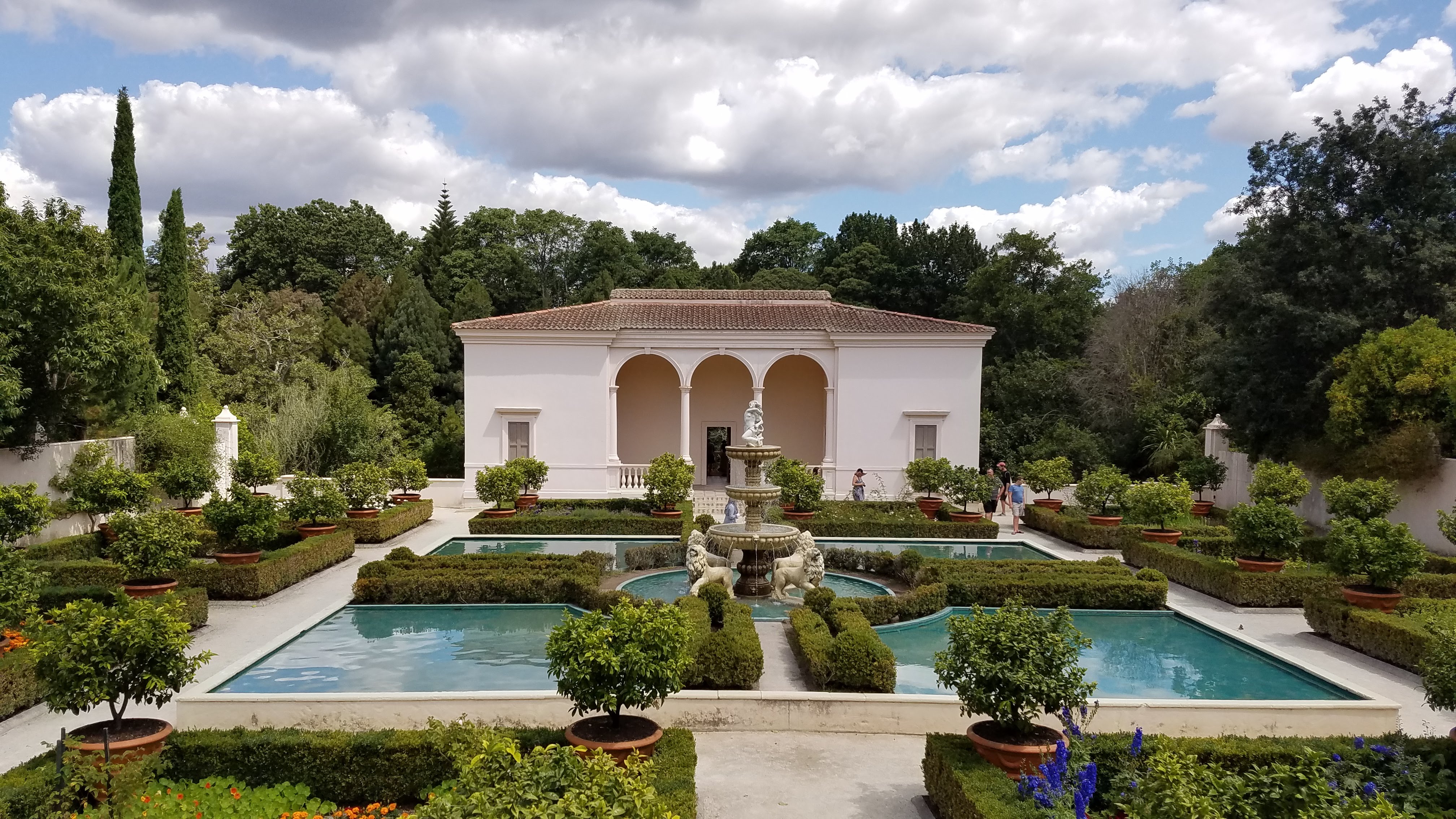 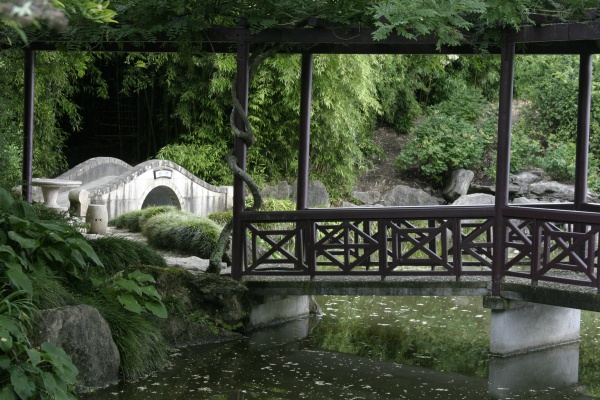 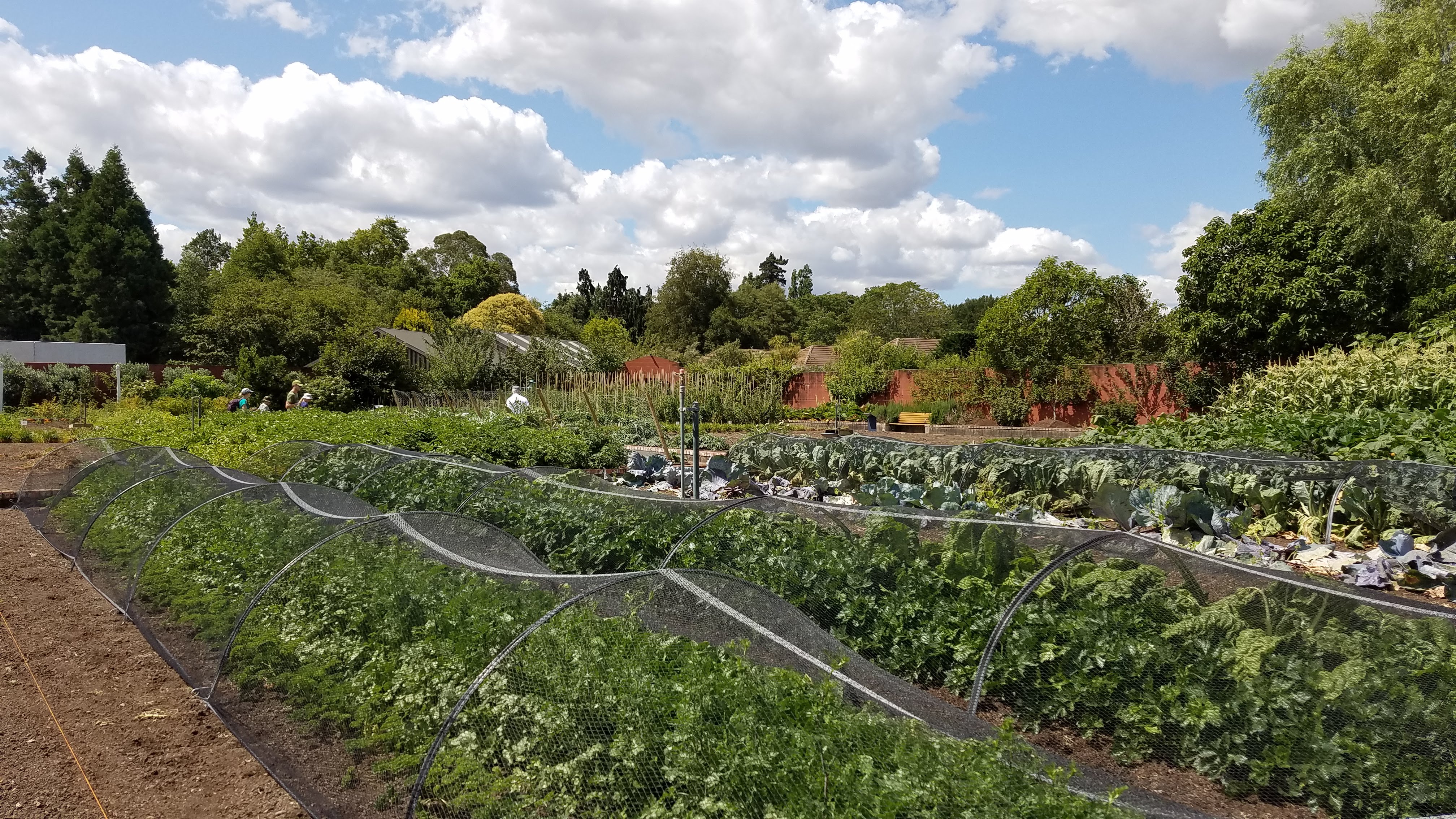 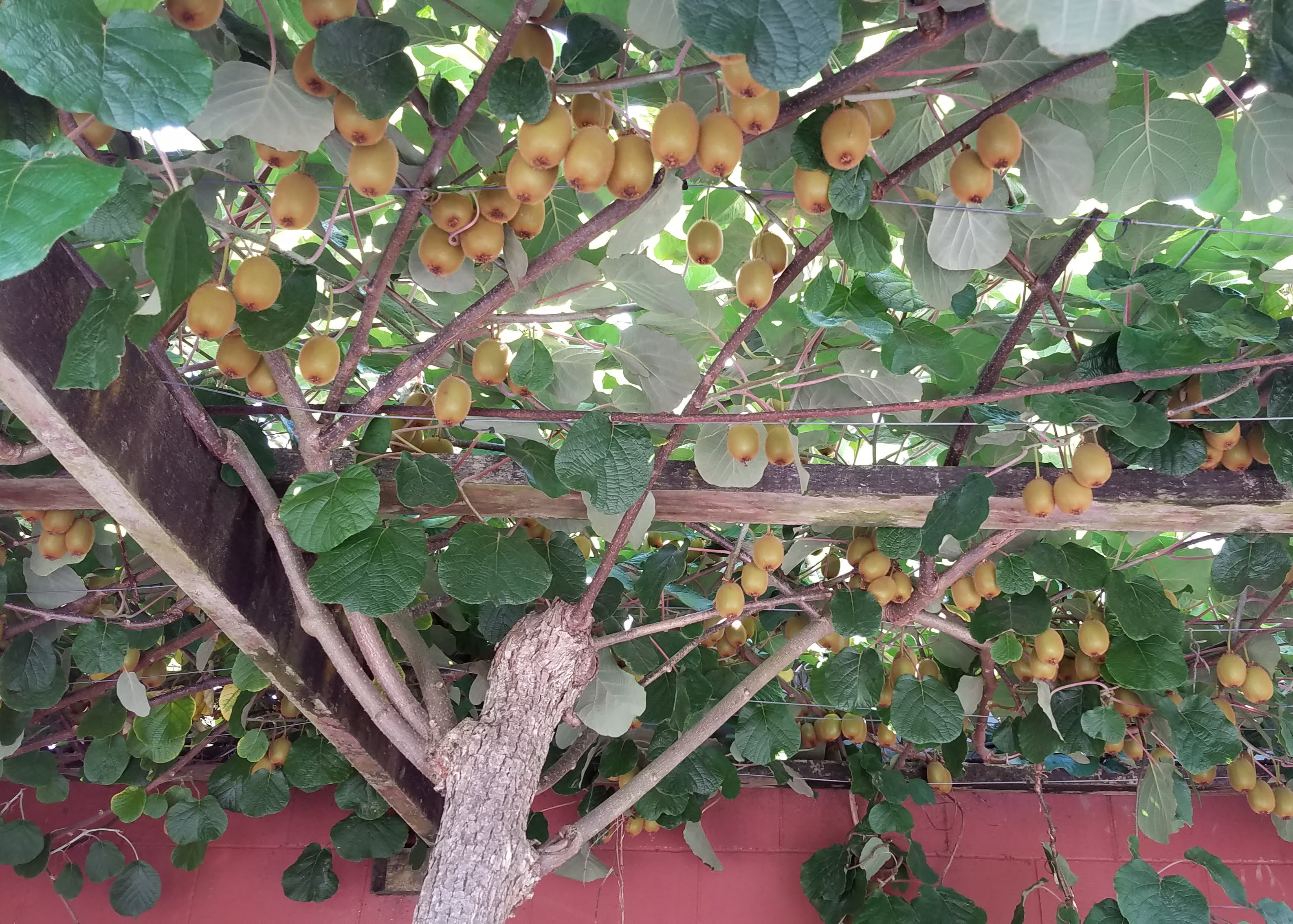 This is how kiwi fruit grow 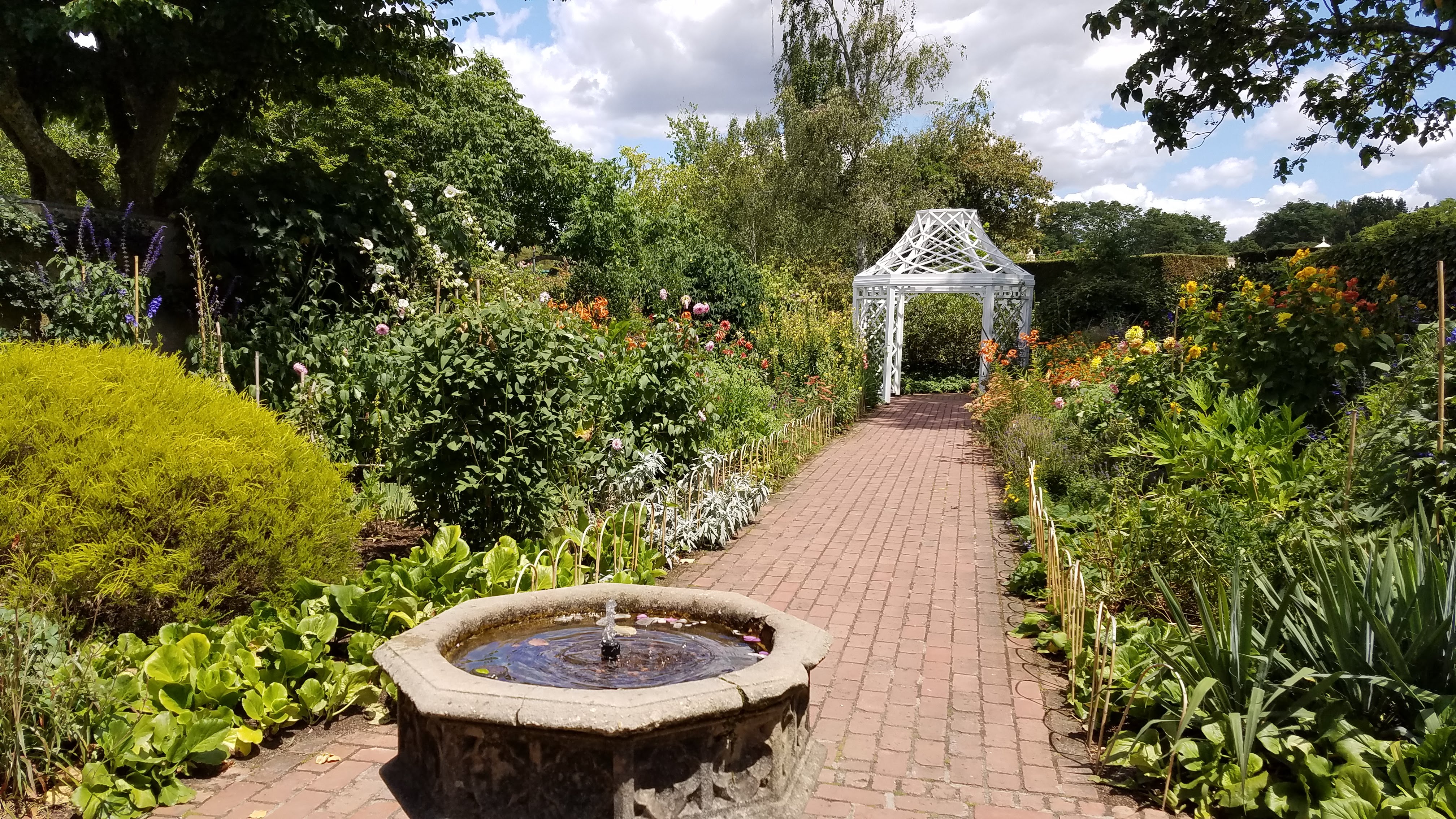 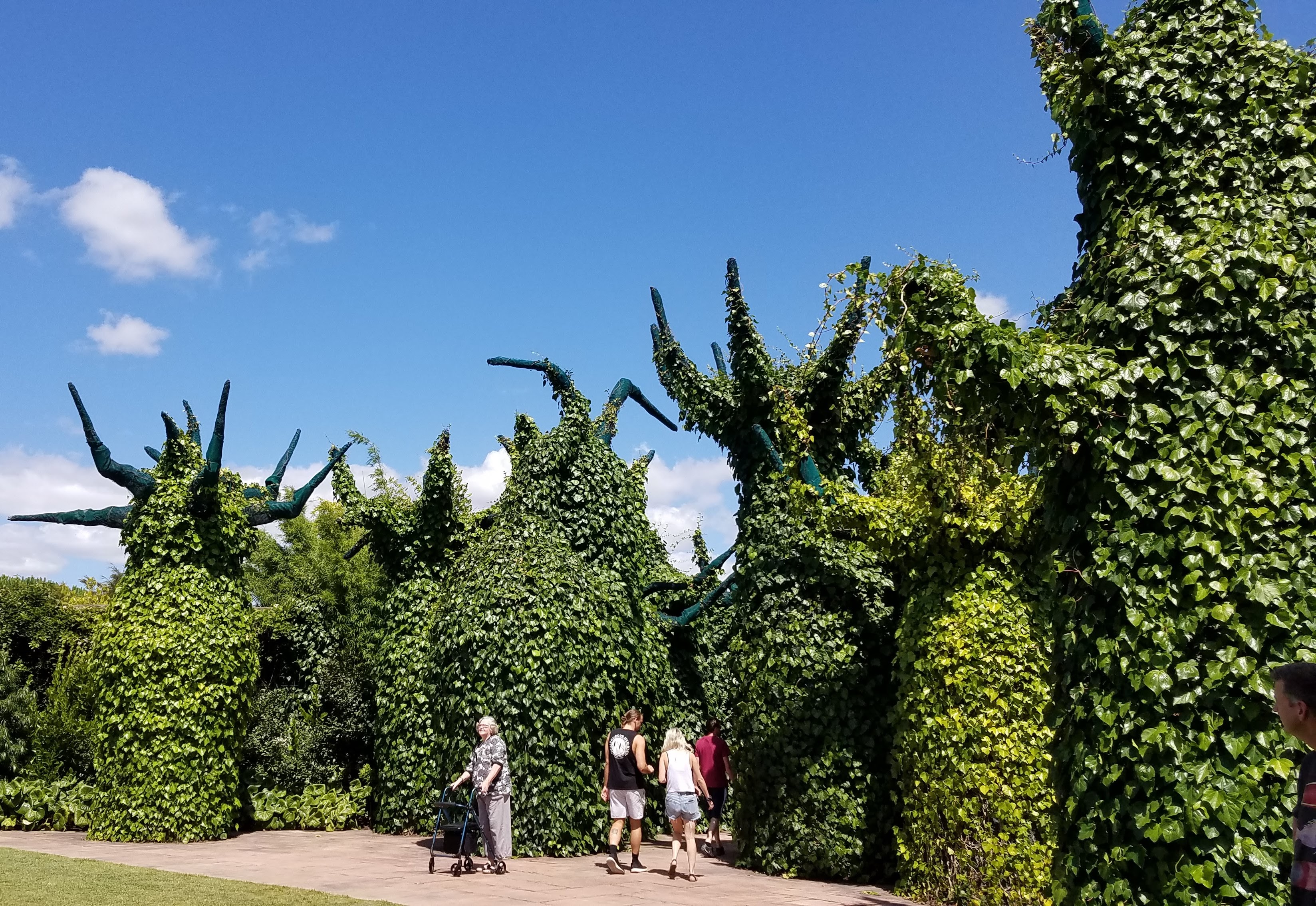 The Surrealist Garden with appendages that moved 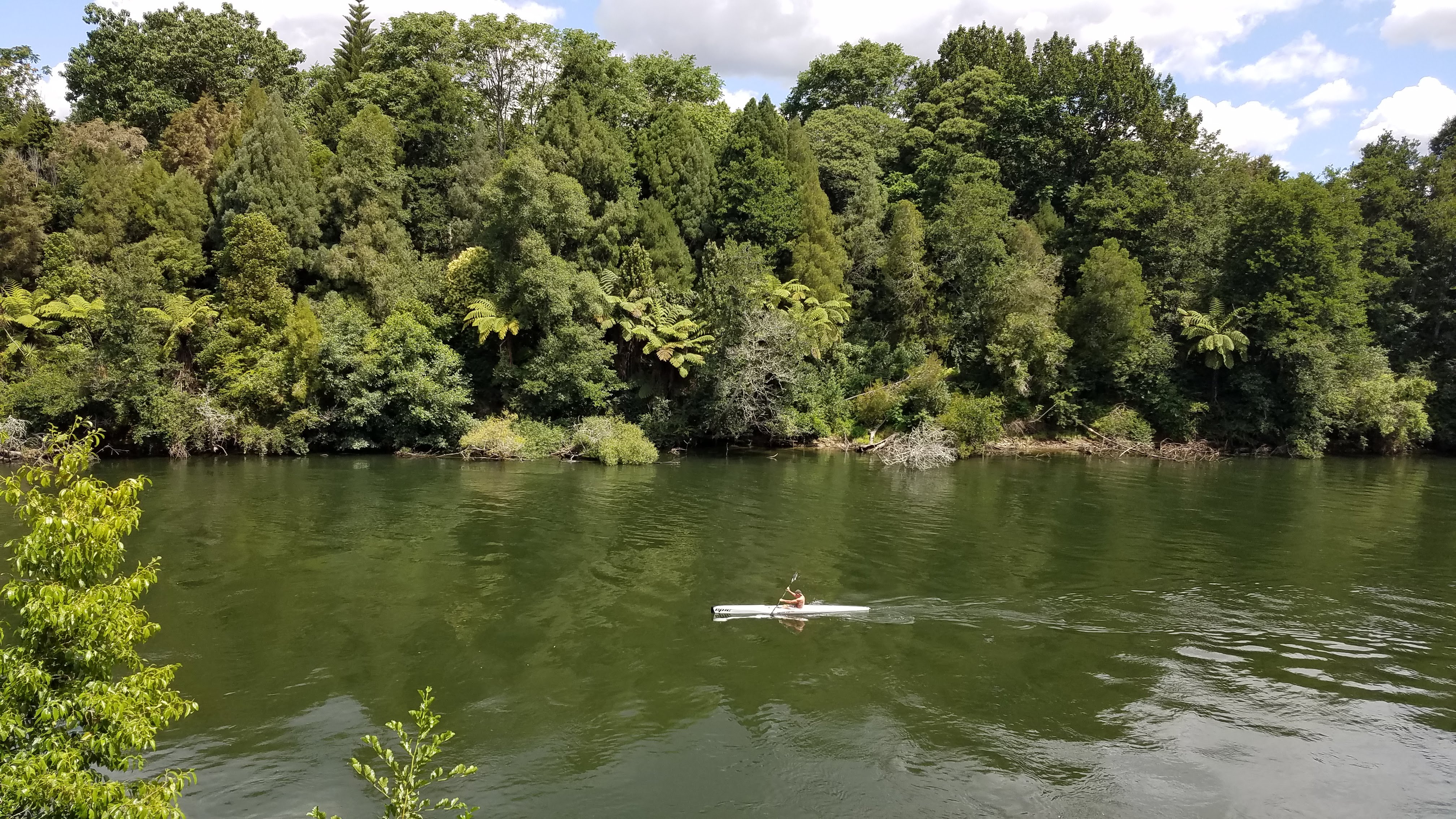 The Waikato River flows alongside the Gardens 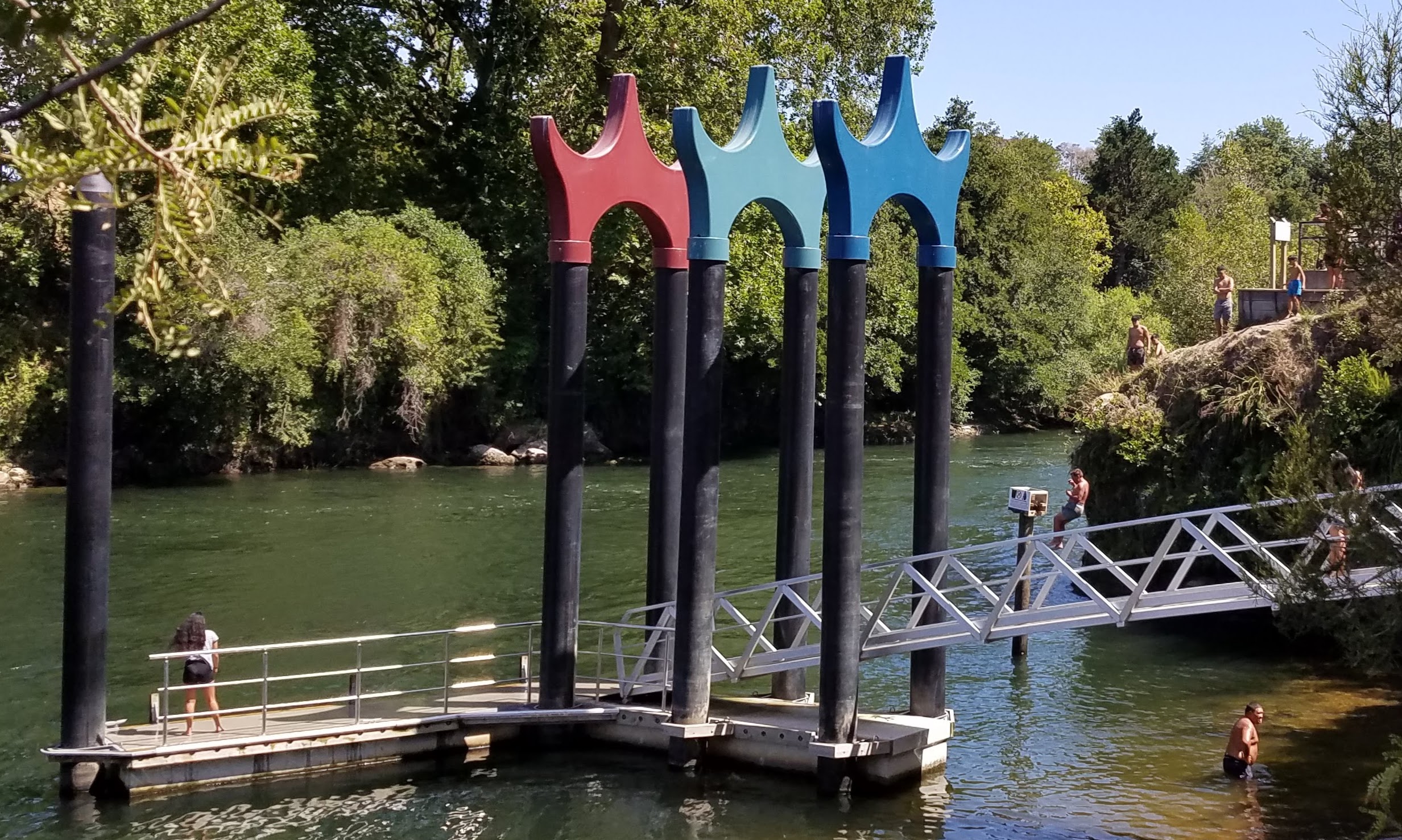 If you look closely, you can see someone jumping off the rock at the right into the river. The water is clearer than it looks 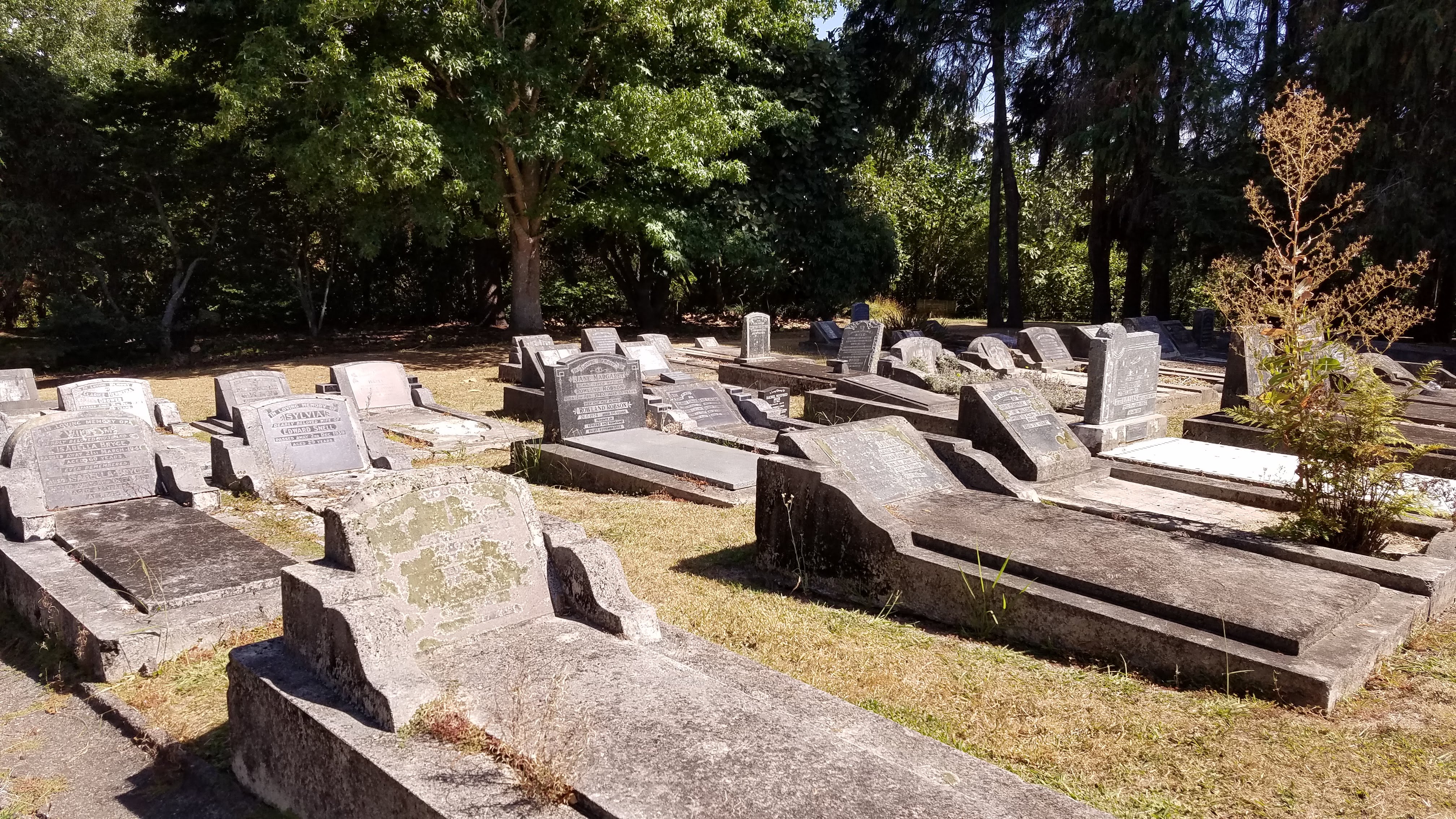 About 4:00 p.m., when we had decided that we had walked around in the sunshine long enough for one afternoon, we headed back toward the carpark. The Gardens had become more crowded during our time there, and now we noticed a large number of people gathering on the open lawn between the Rose Garden and the carpark. Food trucks were lined up around the perimeter of what we later learned was the Rhododendron Lawn, and a couple of men were setting up sound equipment in the center. 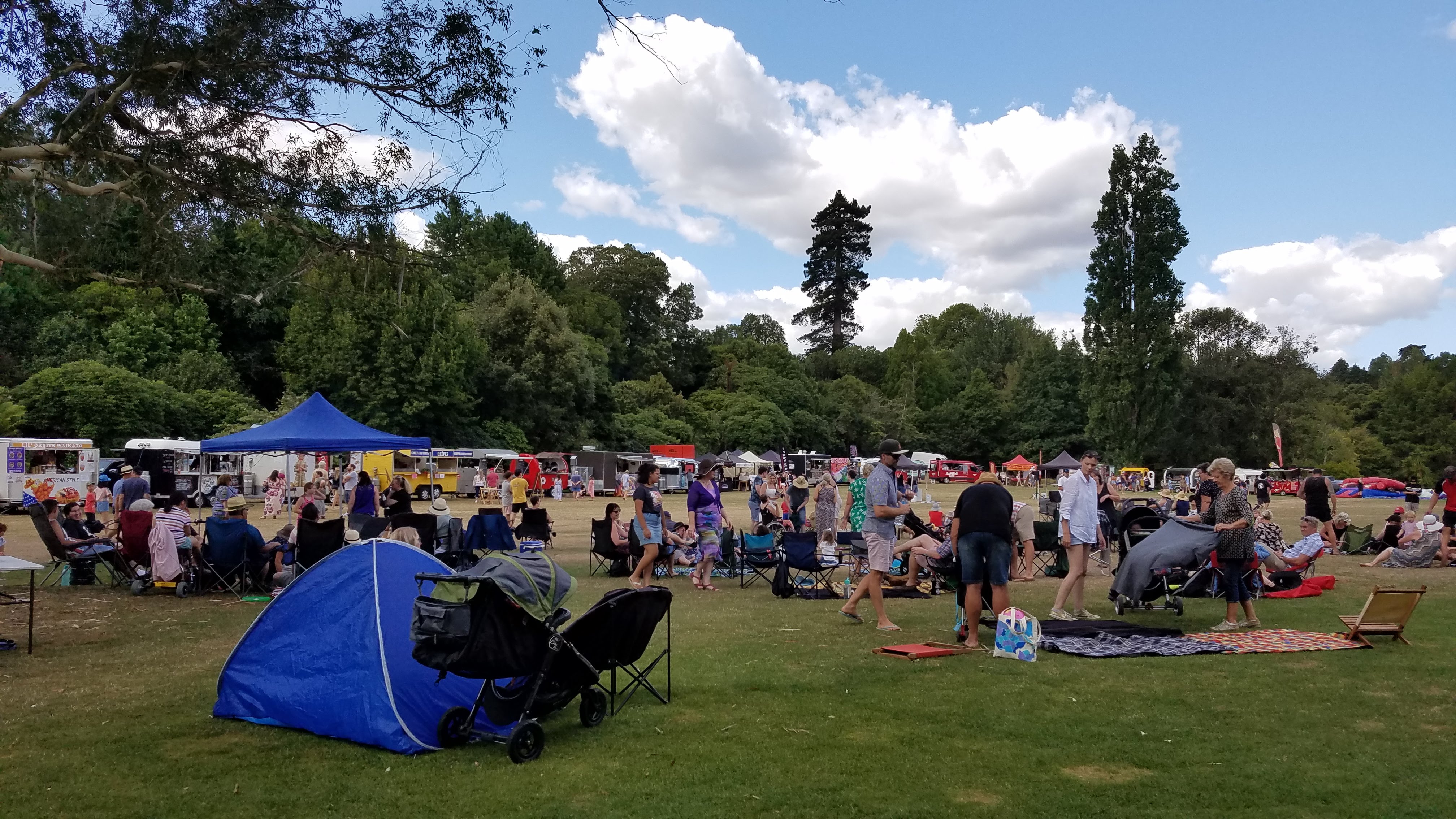 Crowd gathering on the Rhododendron Lawn

“What’s going on?” we asked each other. “I didn’t notice any concert or event posters when we came in, did you?”

Yet more and more people were arriving with lawn chairs and picnic blankets. Several had even set up tent canopies. The laughter of children and the aroma of fried, spicy foods filled the air.

Nancy approached a group gathered around a small portable table laden with wine bottles and glasses.

“What’s happening?” she asked. “Is there a concert here this evening?”

The wine drinkers looked up at her, slightly puzzled.

“No,” they said. “We just like to come here on Sunday afternoons when the weather’s fine, and, you know, be with friends, enjoy a drink, have a bite to eat. During the summer, they bring in the food trucks, so there’s heaps of different foods to sample. It’s quite lovely.”

“We noticed that they’re setting up some kind of sound system. Will there be live performers?” Nancy asked.

“No … well, perhaps. Usually they just play recorded music, but sometimes someone will set up a microphone and have a go at it on the guitar or something. It’s all very informal.”

This is exactly the type of thing that has endeared Hamilton to us—no matter what Fodor has to say about it.