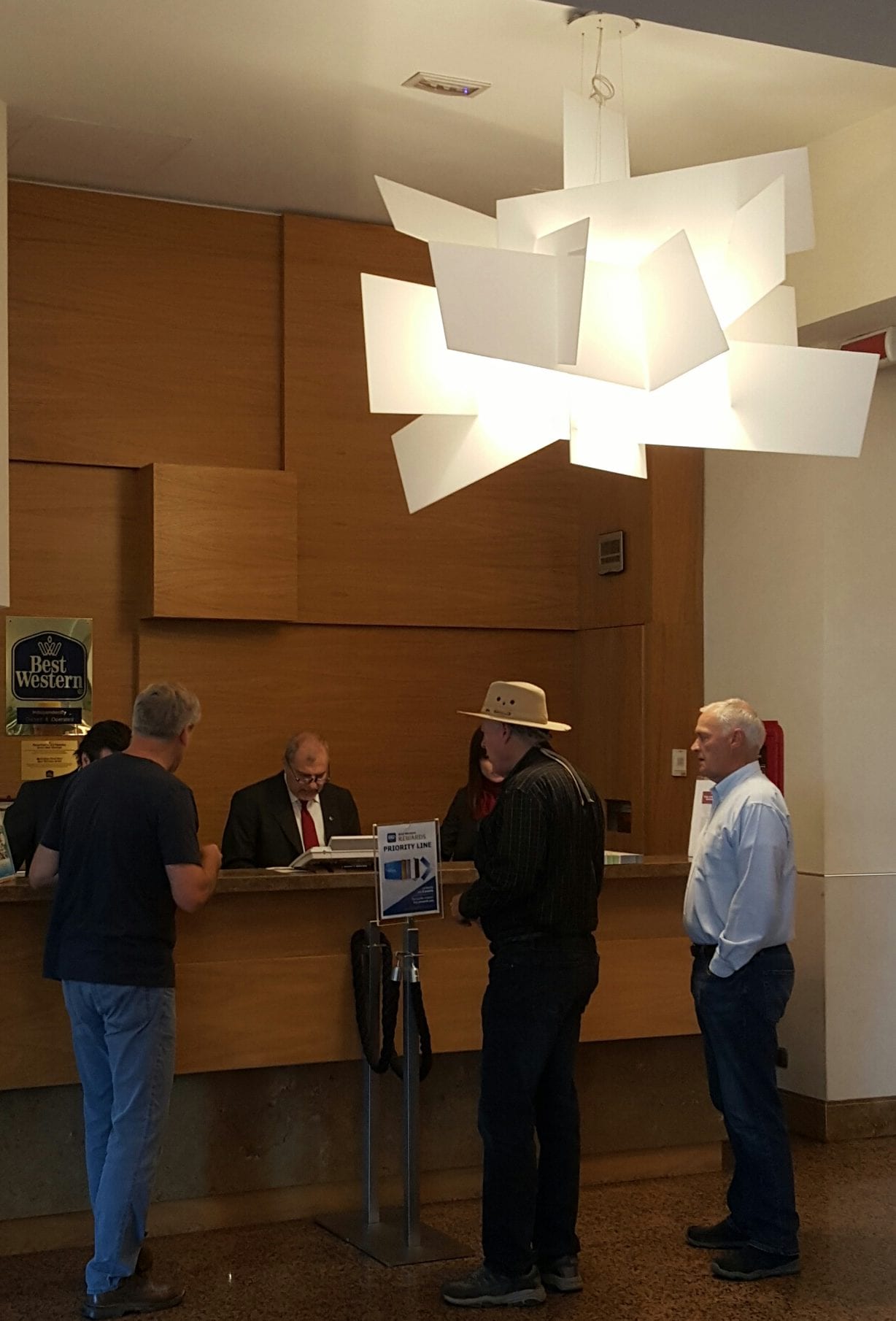 Dyrk, Jeff J, and Barry check out of the Hotel President 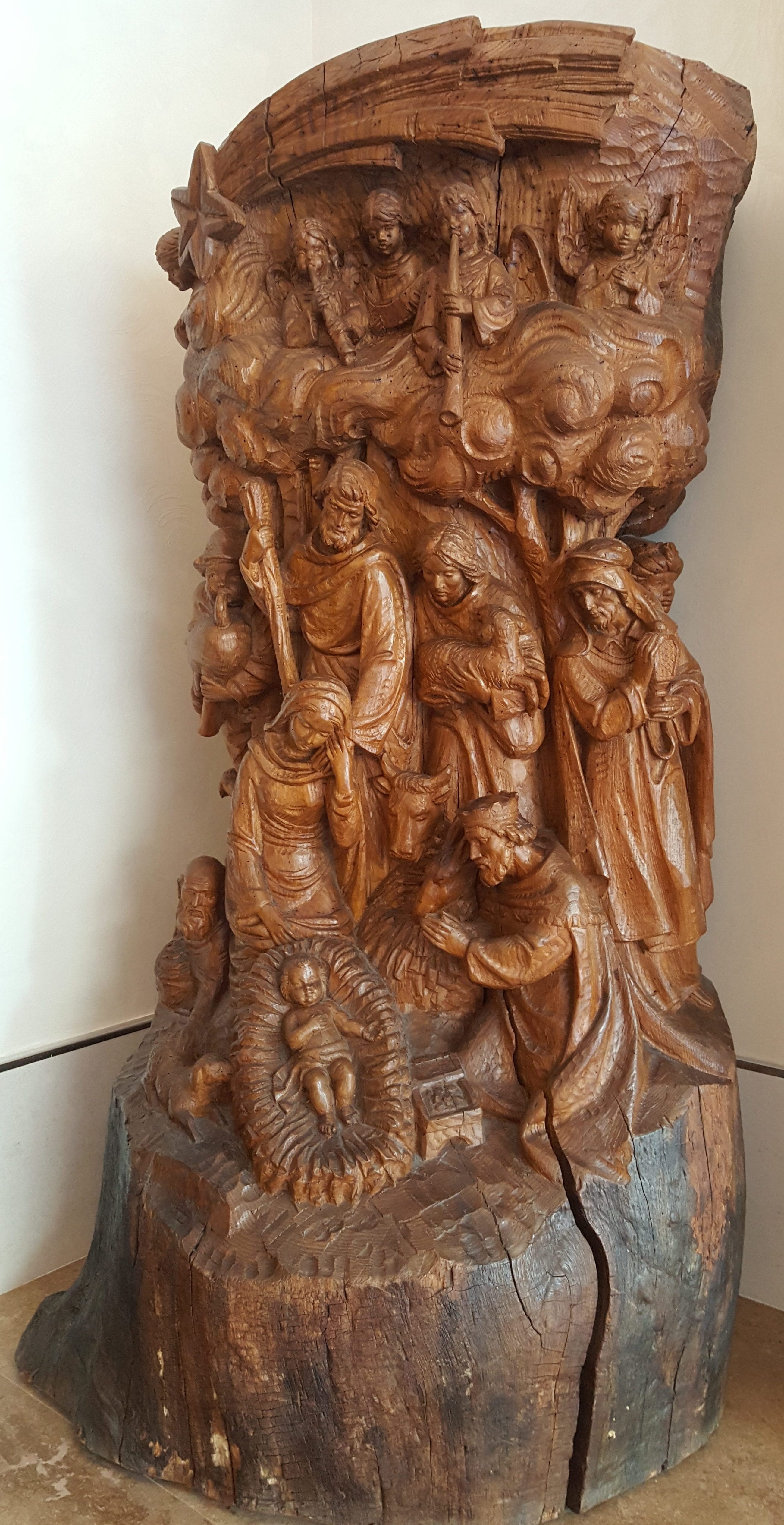 Even though it was before 7:00 a.m. when we went downstairs for breakfast this morning, other members of the Gee Group were already finishing their meal because some had to catch earlier flights than others. Jim and Carol had hired a separate van to take the first group to the airport; the rest of us would go on a bus about half an hour later. The dining room and hotel lobby thus became the scene of many hugs and fond farewells to some of the friends we have made on this trip. This has been a remarkably compatible tour group. Even though the pre-existing divisions between the Cincinnati crew, the westerners, and Amanda’s clan might have persisted throughout our time together, we quickly succeeded in breaking down any barriers. We truly have enjoyed mingling with everyone as we walked around, rode on the bus, and shared meals, and we look forward to staying in touch with each other. 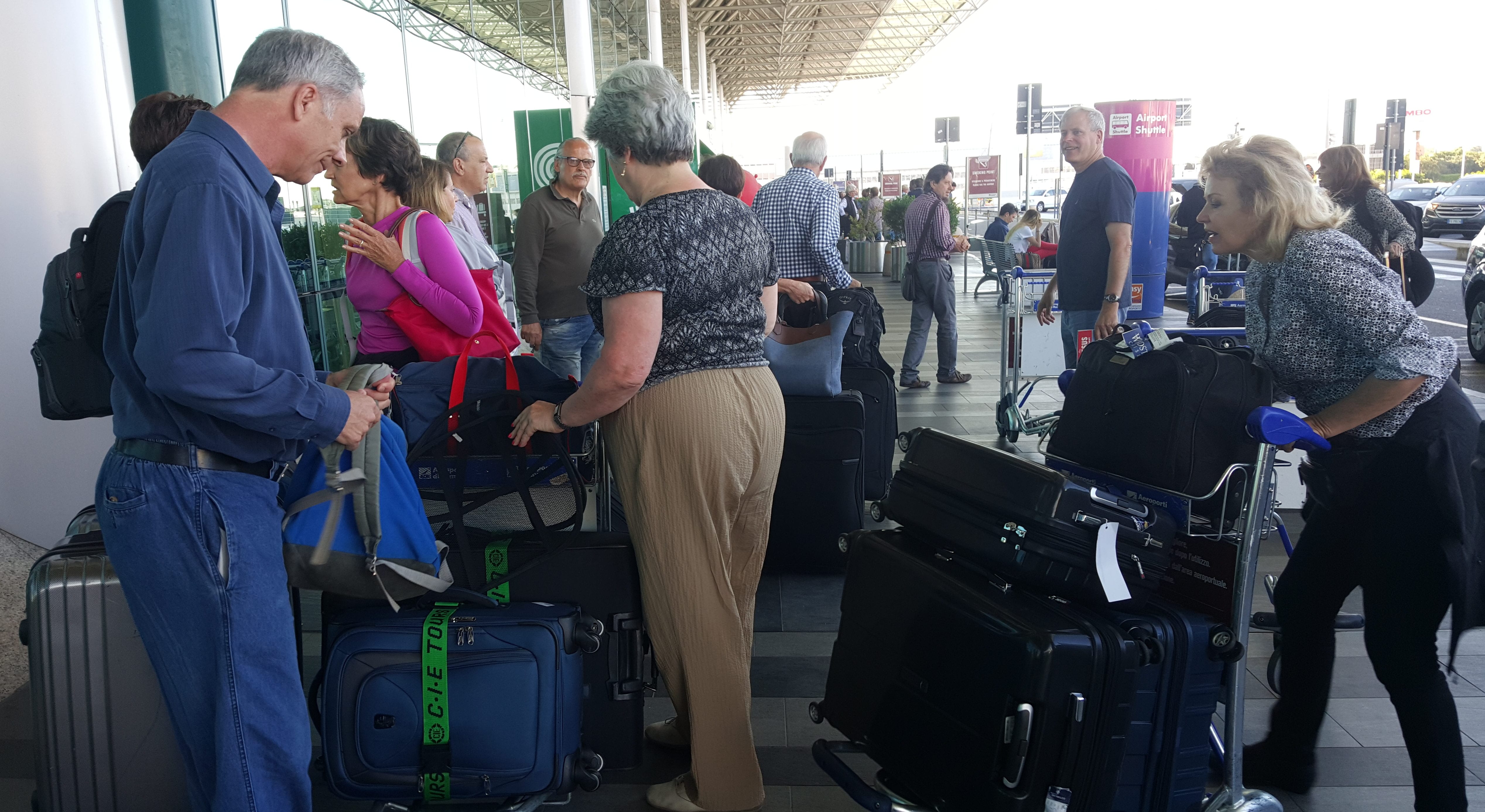 Heading for check-in at the Rome airport

Barely controlled chaos inside the terminal

The pedestrian traffic inside Leonardo da Vinci-Fiumicino International Airport was just as congested this morning as the automobile traffic on the roads outside–and there were fewer directional signals to help us navigate. An airport official instructed us to get in line for a kiosk to check in, but only two of several kiosks in the area were open, and only one of those was fully functional. Then, we were alarmed to see members of the Gee Group who had left the hotel half an hour earlier than we had join the check-in line behind us. Worried that they would miss their flights, we ushered them ahead of us and wished them godspeed. 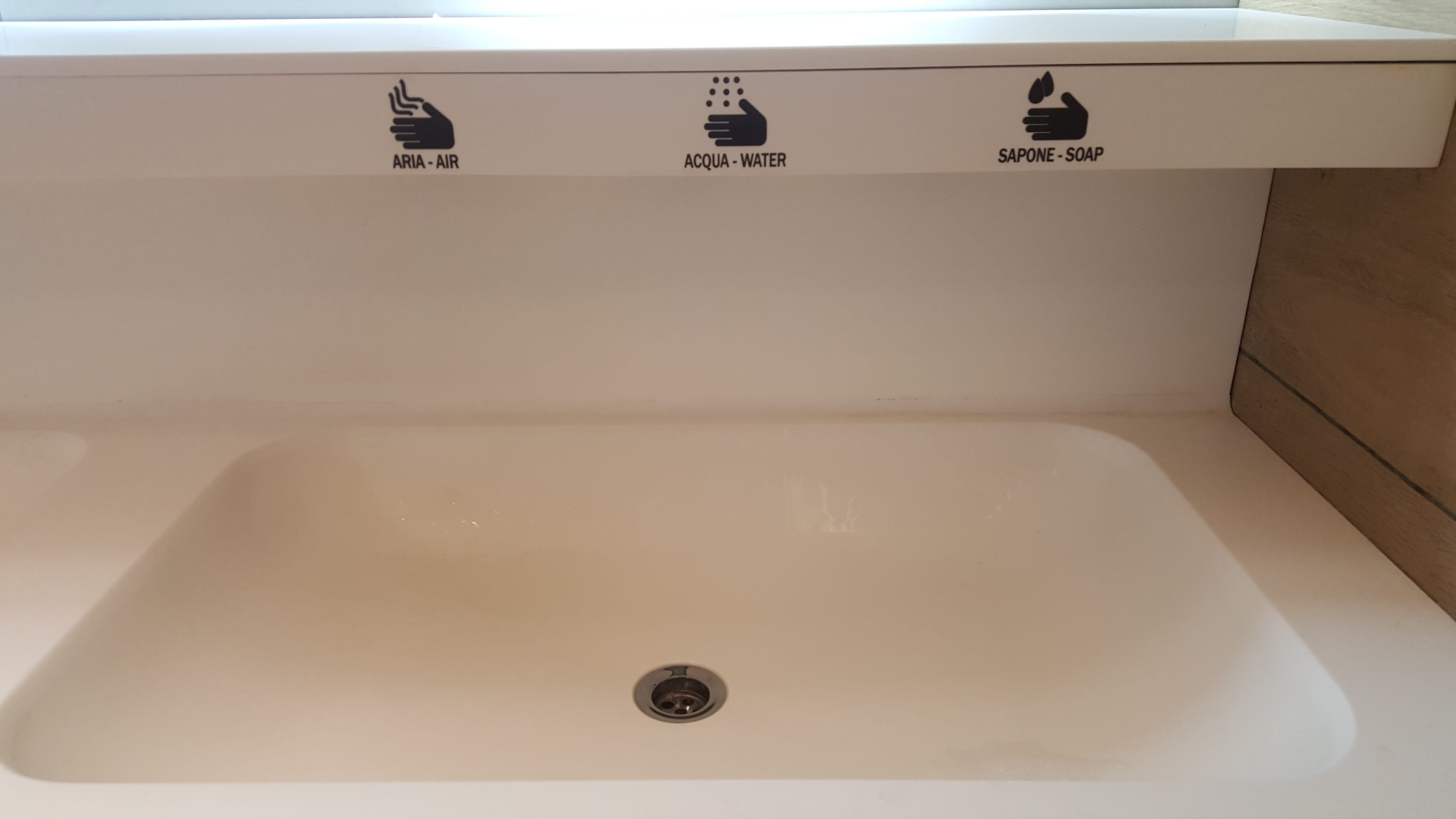 While the Italians still haven’t figured out how to move traffic efficiently, sometimes their technology is way ahead of ours. Lavatories at the Rome airport are simple, elegant, and effective

Eventually all of us made it through the lines for check in, baggage drop, and security. Those of us headed to Cincinnati still had more than an hour before boarding about 10:30 a.m., so we had time to browse through the boutiques and duty-free shops–scores to choose from–or just sit and relax. 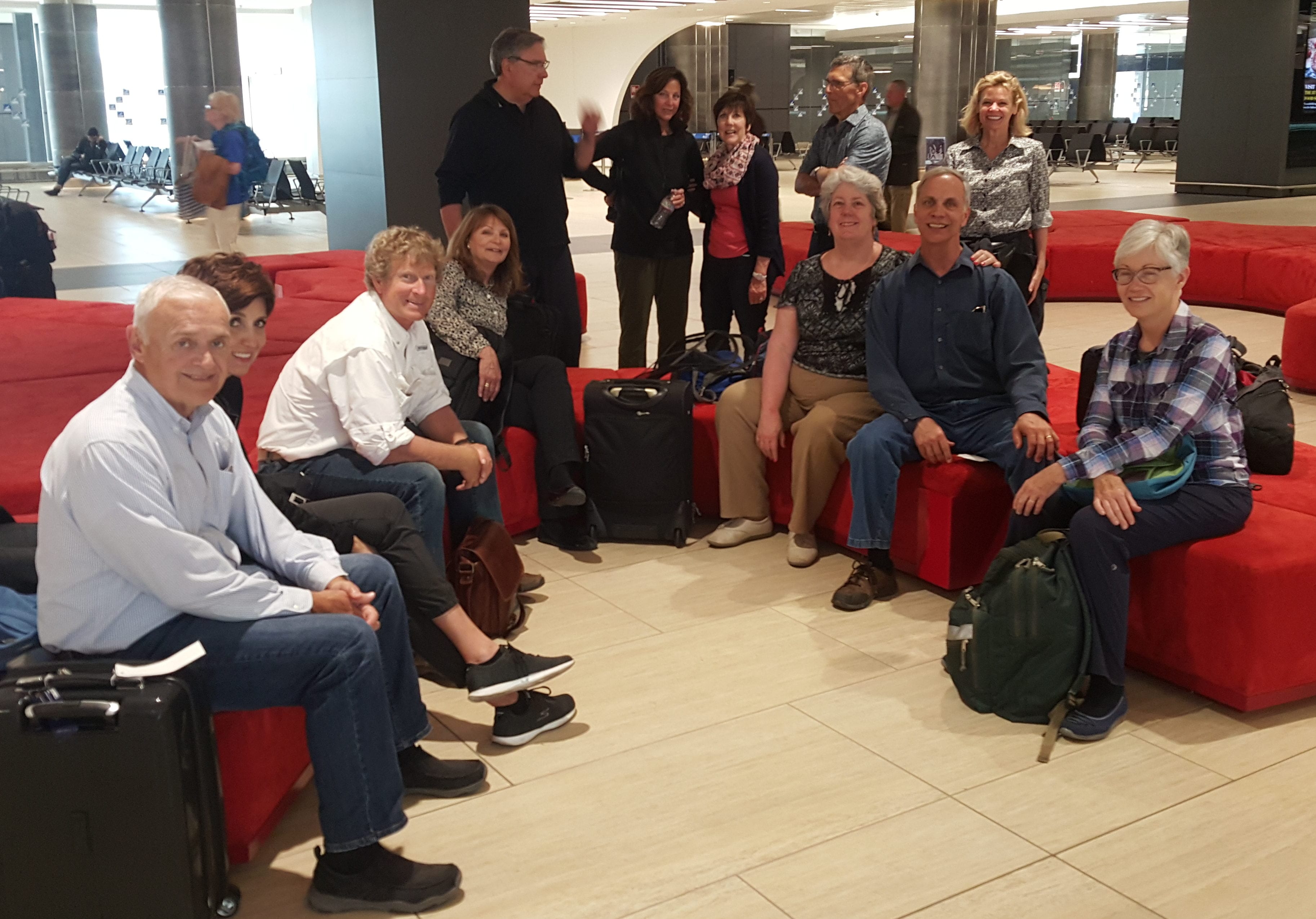 On the flight from Rome back to the U.S. we were again seated next to the toilets. This time, however, the location was more of a blessing than an annoyance because our seats came with the added legroom of the bulkhead. Moreover, we were flying during the daytime and weren’t desperate for sleep, so we didn’t mind the occasional opportunity to visit with friends as they waited to use the facilities. Nancy pulled out her laptop and took advantage of the time to edit and add to material Michael had already written for this blog; Michael read, and watched The Queen of Katwe (an inspiring film based on the true story of a young Ugandan girl who becomes a chess champ). Thus, the hours seemed to fly by along with the miles.

It was mid-afternoon Eastern Daylight Time when we landed in Detroit. We had to claim our luggage there so we could take it through U.S. customs, but with nothing significant to declare, we breezed through. Getting through security again was not so easy, however. Michael had neglected to transfer the bottles of olive oil we had bought at a duty-free shop in Rome to his checked bag and therefore got stopped. Fortunately, he was able to check his carry-on bag so the oil wouldn’t get confiscated, and we proceeded with our Cincinnati comrades to the gate for our short flight home.

Sunset was still a few hours off when Budge and Linda dropped us off in our own driveway. We took our bags inside and then drove to Panera for dinner because we knew there was nothing at home that could be ready to eat quickly without any effort, and we certainly didn’t feel like exerting ourselves. (Why is it that sitting on an airplane or in a car all day, hardly moving, is so draining?) Nancy went to Kroger to buy a few essentials–and saw Budge coming out with a small bag and a gallon of milk as she pulled into a parking space. Meanwhile, Michael opened his suitcase and started to unpack. We forced ourselves to stay up until about 9 p.m. and then, eighteen hours and about five thousand miles from where we arose this morning, we went to bed.

No doubt, many people will ask us: “How was your trip?”

“Fabulous!” we will reply.

Some will ask: “Where exactly did you go?” or “What did you do?”

Our answer to both questions: “Read our blog.”

Several more will ask: “What was your favorite place?”

As always, it will be nearly impossible to answer that one. Each place we visited was unique. Even the Greek islands each have a distinct character unlike any of the others. It’s just too hard to try to rank them.

Here’s a question that’s easier to answer: “What surprised you?”

First, we were surprised that Athens didn’t look at all like the capital of a cash-strapped country. The city we saw was clean, modern, and inviting, and despite warnings to watch out for pickpockets, it felt safe. Granted, we were there for less than 24 hours and didn’t venture into non-tourist territory–but we’d go back. 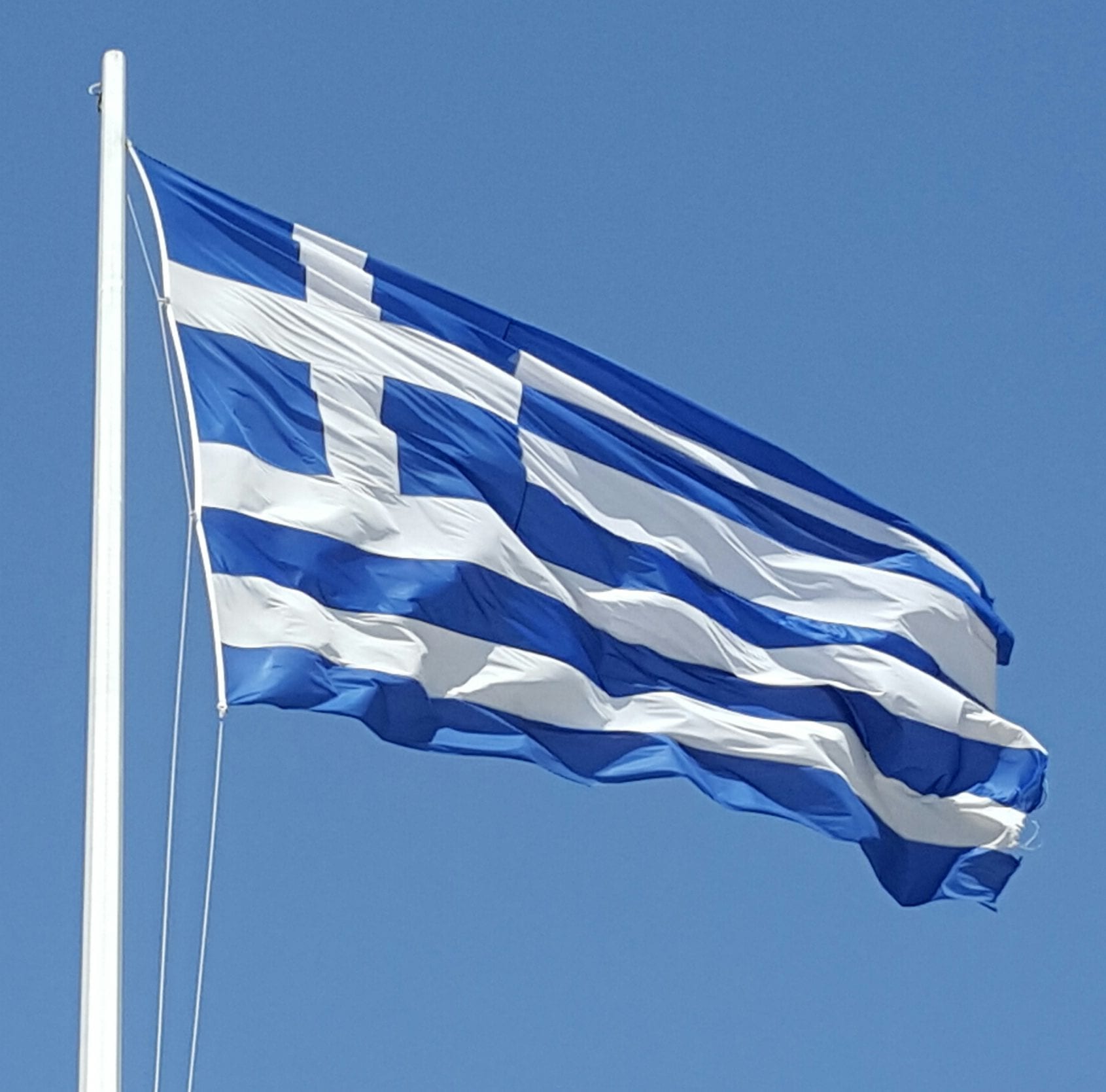 Second, we had not expected the Greek islands to be as small, mountainous, and dry as they are. The words “island cruise” had evoked visions of a tropical paradise with waterfalls and lush vegetation. Now we know there’s a reason the Greek flag has the brilliant blue of its sea and sky, separated by bands of whitewash–but no green.

Third, both of us were surprised by how much we enjoyed revisiting Rome. In the late 1970s, when we were last there, Rome was dirty and crowded. Famous monuments were either black with grime or hidden behind towers of scaffolding. Unpleasant odors wafted from uncollected garbage, dank alleys, and other people’s underarms. Nancy recalls the youth hostel in Rome–where she had spent her twenty-first birthday–as a cross between an airplane hangar and a metro station: row upon row of creaky metal beds set up in a cavernous concrete room, constantly crisscrossed by people trying to get somewhere else. She also recalls having to beat off some overly aggressive packs of Italian men. Michael remembers feeling confused by the city’s jumble of ancient ruins, presented to visitors without enough cues for fitting the pieces into their proper historical contexts. Neither of us was terribly excited to go back.

This time, however, we had a completely different experience in Rome. While the city was still crowded–probably even more so than it had been forty years ago–it was much cleaner. Famous monuments gleamed. Popular historical sites were much better prepared for the volume of visitors, so even though we still had to wait in some long lines, at least they kept moving in the right direction. We stayed in a comfortable hotel and were led by knowledgeable guides who provided interesting and helpful background information. We also realized that there is much more to Rome than ancient ruins and over-the-top baroque art. Rome is also a vibrant, modern city with a rich contemporary culture. We saw posters advertising concerts, plays, film festivals, and fashion shows. Next time we go, we want to focus more on what twenty-first-century Rome has to offer.

Another question we can answer is one asked pre-departure by a woman who sat next to Nancy on the plane to Seattle a couple of weeks ago: “Would you recommend Windstar Cruises?”

Definitely! Now that we have spent a week on a yacht-sized luxury cruise ship, we have no interest in spending even one night on one of those four-thousand-passenger floating cities.

One more question that we’re sure to get–and this is one we usually have trouble answering, but today we have a response. “What was your favorite part of the trip?” 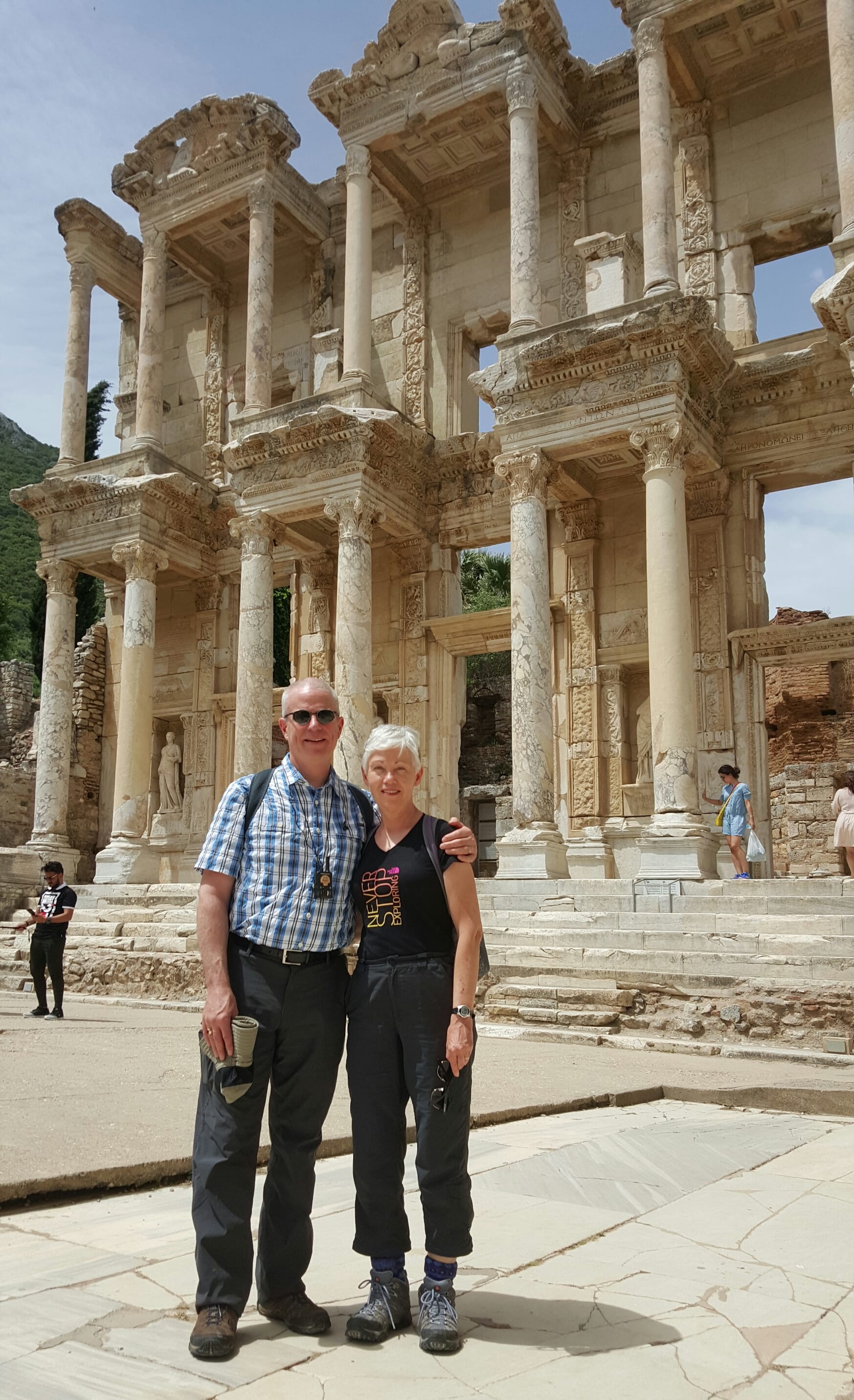 Both of us agree that our favorite day was the one we spent in Turkey–especially in Ephesus. So much of the ancient city remains, still laid out the way it was more than a thousand years ago, without those thousand years’ worth of more recent layers of civilization to confuse things. It was easy to imagine the streets busy with people in tunics and sandals, gossiping as they filled their water jugs or stood in line to buy bread. We could picture toga-clad men meeting in the marble-lined halls to discuss news of the emperor’s latest conquest, or lounging on cushions around a triclinium set with fruit platters and wine jugs. We could feel the spirit of those who gathered to hear Paul’s testimony of Jesus Christ, and then vowed to support one another in their newfound faith.

We were tantalized by our afternoon in Kuşadasi, realizing how little we saw of Turkey and how much there must be to learn about this completely foreign culture. We can hardly wait to go back.

And finally, that day became an enchanted evening, when we returned to Ephesus and became part of it, dining amid the ruins and listening to glorious music as the sun went down. It was truly an unforgettable experience.

But now that we’ve written this blog, the whole trip will be unforgettable.