View of Santorini from the caldera

From our porthole, Santorini looks like a half-eaten slice of chocolate cake with vanilla frosting, resting on a blue plate: dark cliffs topped with a row of whitewashed buildings, rising steeply from the smooth, azure water. This little group of islands (total land area less than 30 square miles) is shaped much like the crescent and star on a Turkish flag, with Santorini and Thirasia curving around the lagoon-like caldera and the uninhabited island of Nea Kameni in its center. The caldera was flooded when the underlying volcano erupted in 1627 BC. That eruption also buried the Minoan city of Akrotiri at the southern tip of Santorini, bringing an end to that bronze-age civilization. (Some people believe that the destruction of Akrotiri gave rise to the legend of the lost city of Atlantis.) Nea Kameni appeared in 47 AD, thrown up by less violent volcanic activity. Although the crater on Nea Kameni is still active, we weren’t too worried about having our vacation spoiled by an eruption because it hasn’t done much beyond coughing up a little lava for several hundred years. 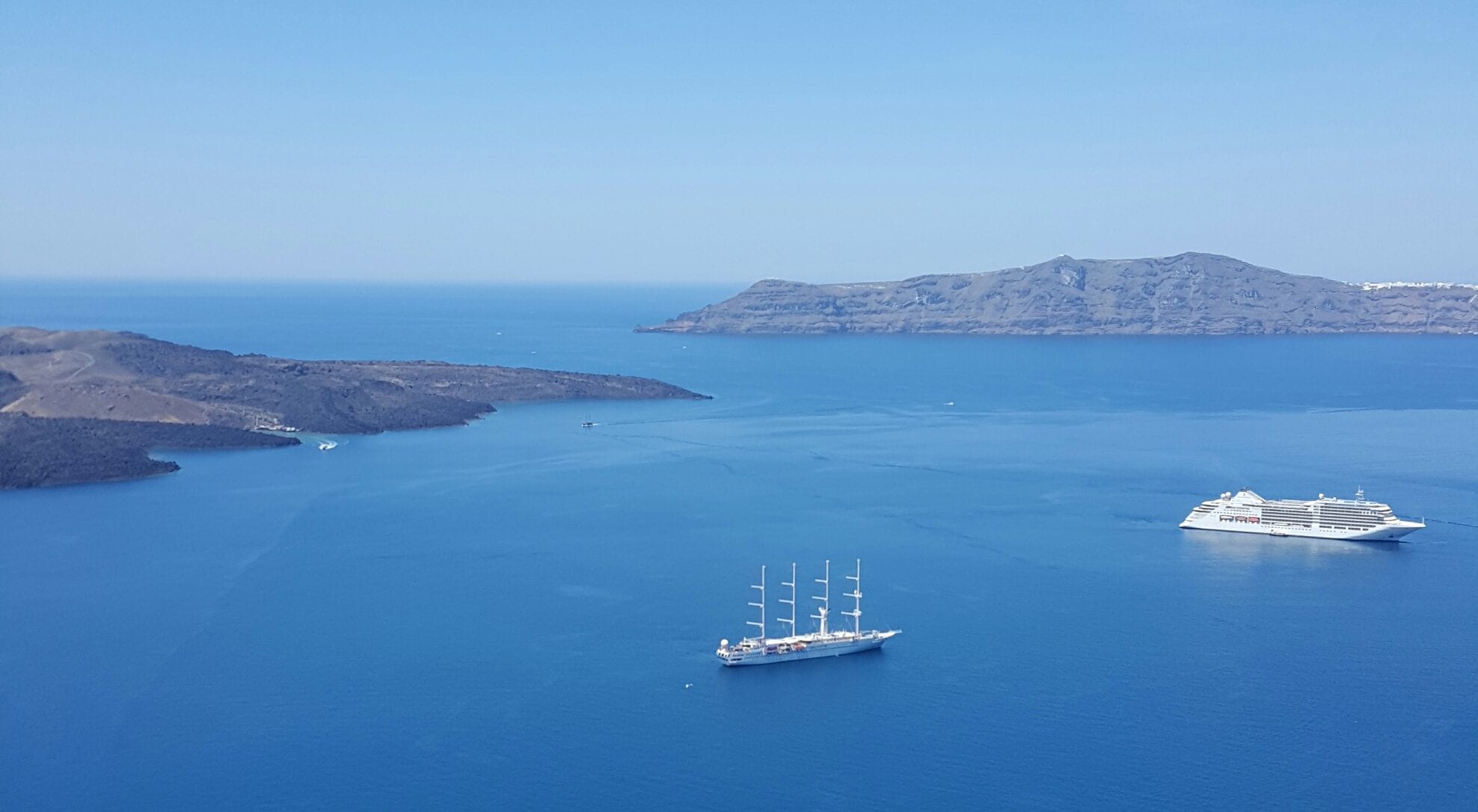 The Wind Star and another vessel drift in the caldera; the uninhabited island of Nea Kameni is at the left, Thirasia is at the right; the photo was taken from the top of the cliffs on Santorini

Greeks know the island of Santorini as Thera; the Latin name originated during the Venetian occupation, derived from the name of a medieval cathedral dedicated to Santa Irini. Several other churches on the island today seem to be named for Santa Irini, too, notably the one with the unbearably picturesque bell tower shown in virtually every promotional brochure for the Greek islands. (Curiously, there are nearly as many Christian saints who carry some form of the name Irene as there are churches. Some of those Irenes were Greek, but none of them was from Santorini.)

The tender took us to the pier at the base of the town of Fira, where we met our guide for the day: another Nikolas. He directed us to the cable cars (actually six-passenger gondolas) that would take us to the main part of town at the top of the 800-foot cliff. The cable cars were a better choice for our group than the two alternatives: climbing nearly six hundred steps on foot, or hitching a ride up the zigzagging stairs on a mule. Once everyone had made the ascent, Nikolas helped us get oriented, pointing out that the clock tower of the Roman Catholic Cathedral of St. John the Baptist, located near the cable car station and visible from nearly everywhere in Fira, would be our best landmark should we get separated from the group in the maze of narrow streets. Nikolas then led us on a brief walking tour along the main thoroughfare, past the “legendary” Hotel Atlantis, and ending near the modern Greek Orthodox Metropolitan Cathedral. 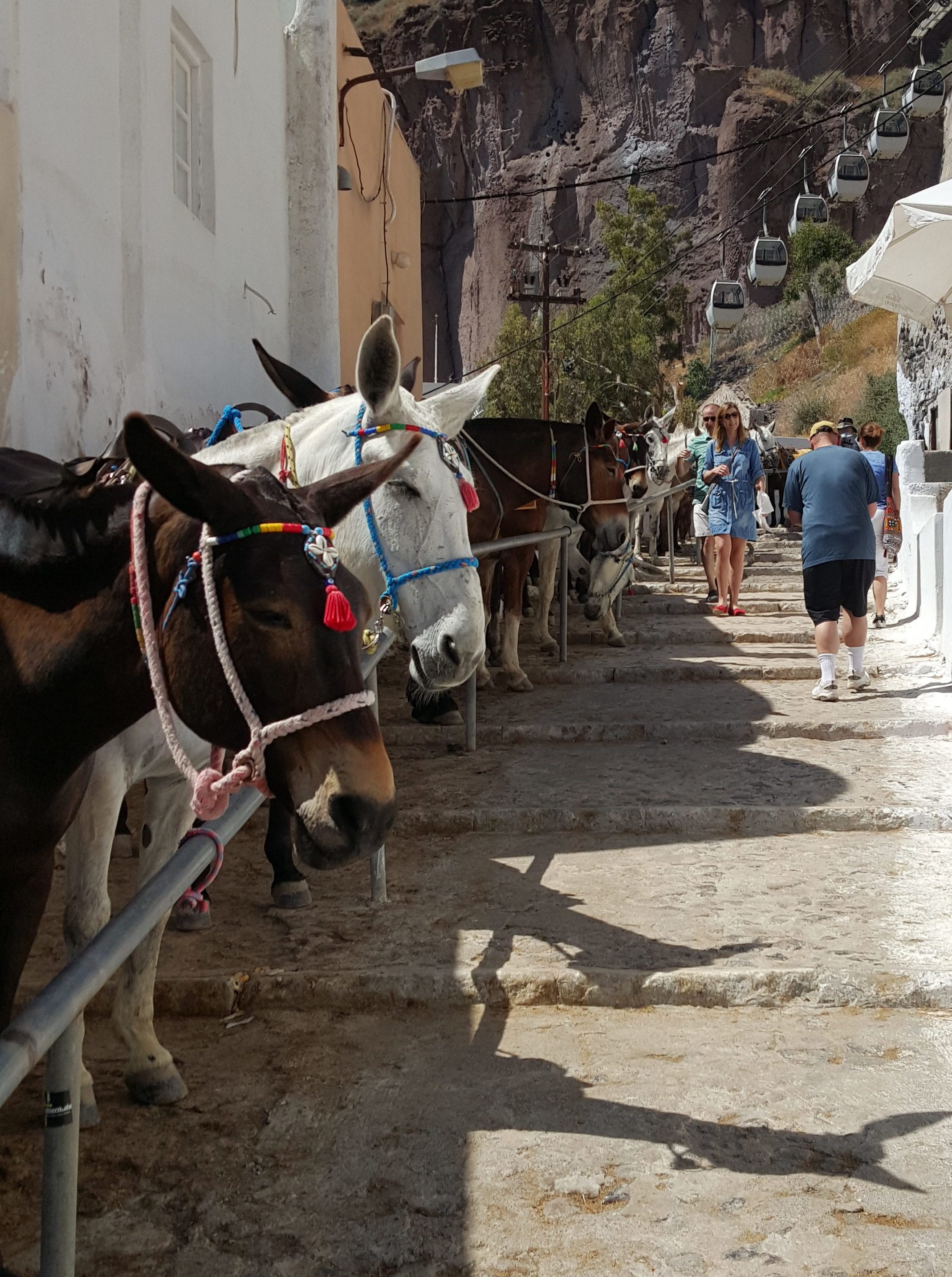 Dozens of mule “taxis” are available to transport visitors to the town at the top of the cliff. We chose to take the cable cars (visible in the distance) instead 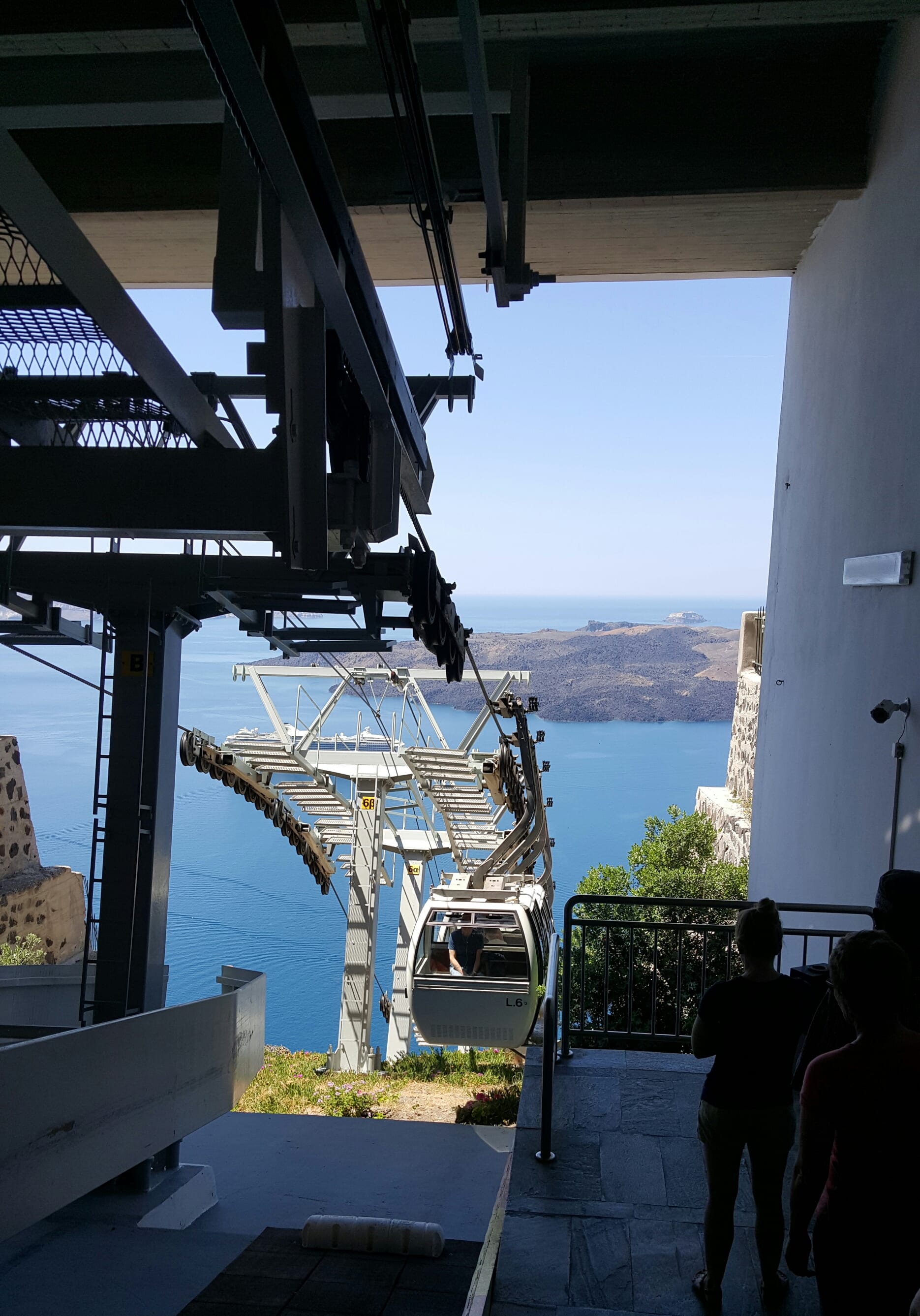 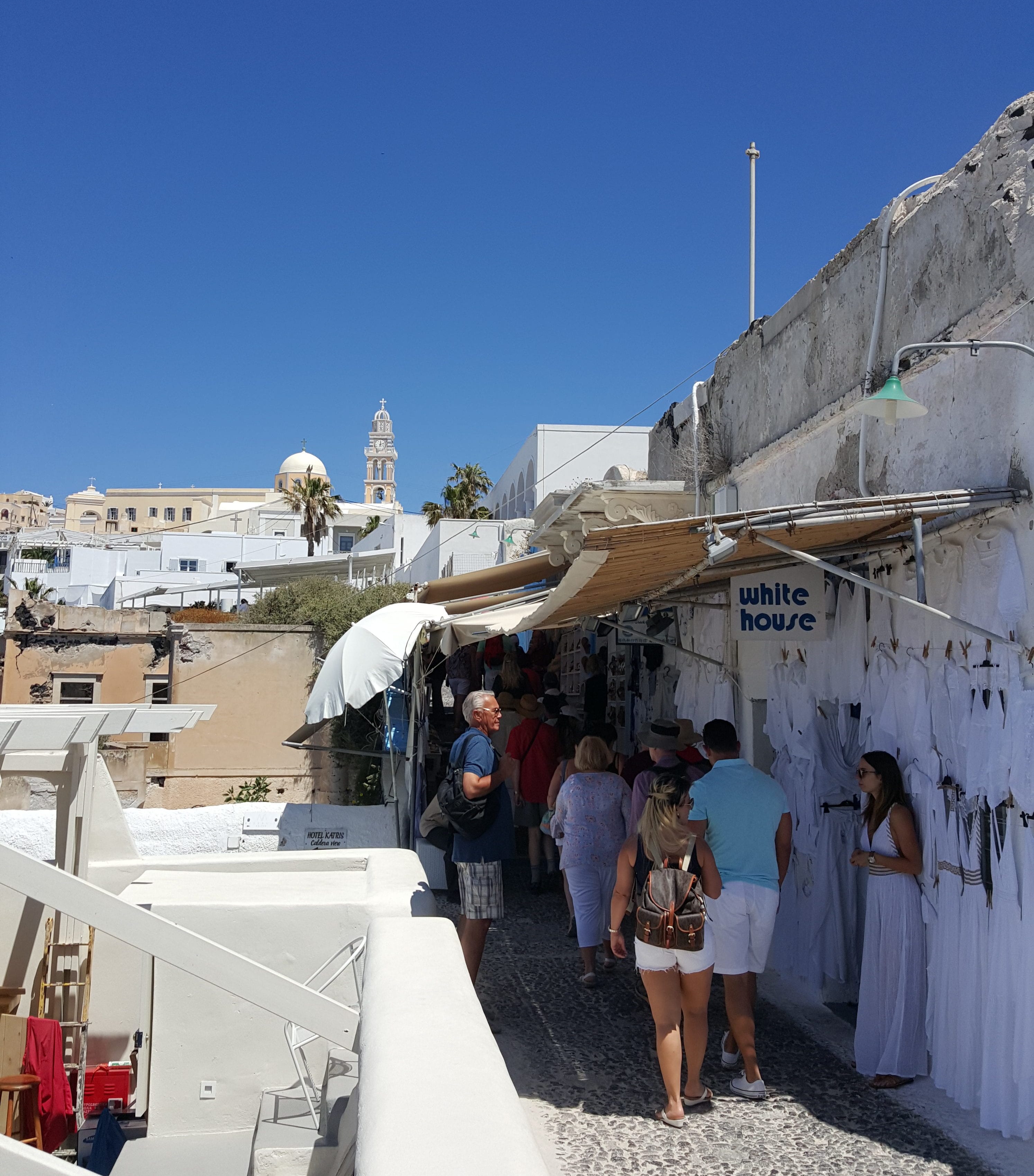 A street in Fira, with the dome and clock tower of the Cathedral of St. John the Baptist in the distance

From there we boarded a bus for a trip to the town of Oia at the north end of the island. As we passed through the village of Firostefani on the way, Nikolas pointed out the historic Monastery of Agios Nikolaos on the mountainside, established for female religious in 1651. Today it houses a folklore museum, maintained and operated by the two remaining nuns. Our guide also directed our attention to some cultivated fields, explaining that although there wasn’t a lot of arable land on Santorini, the island produced enough cherry tomatoes, white eggplant, and grapes for export as well as its own population.

The town of Oia (originally known as Apano Meria, which means “upper side”) began as a thirteenth-century citadel, but it didn’t really flourish until the late nineteenth century. Then it became the home of a significant merchant fleet, and wealthy sea captains built their homes on the cliffs overlooking the ocean. The local economy began to decline in the early twentieth century as commerce shifted to larger ports, and then in 1956, true disaster struck: an earthquake registering at 7.8. Oia’s surviving residents (generally called Apanomerites) decided that their only hope for the future was to capitalize on the town’s stunningly beautiful location. To increase its value as a tourist destination, they restored buildings destroyed by the earthquake in the quaint, traditional style. The scheme has definitely worked–although Jeff J, an architect and closet structural engineer, saw no evidence that even the modern buildings would be capable of withstanding another earthquake. That danger notwithstanding, Oia provides an unending parade of spectacular photo-ops: sparkling white homes and churches with cobalt-blue domes that mirror the hues of cloud, sky, and sea march by at every turn. 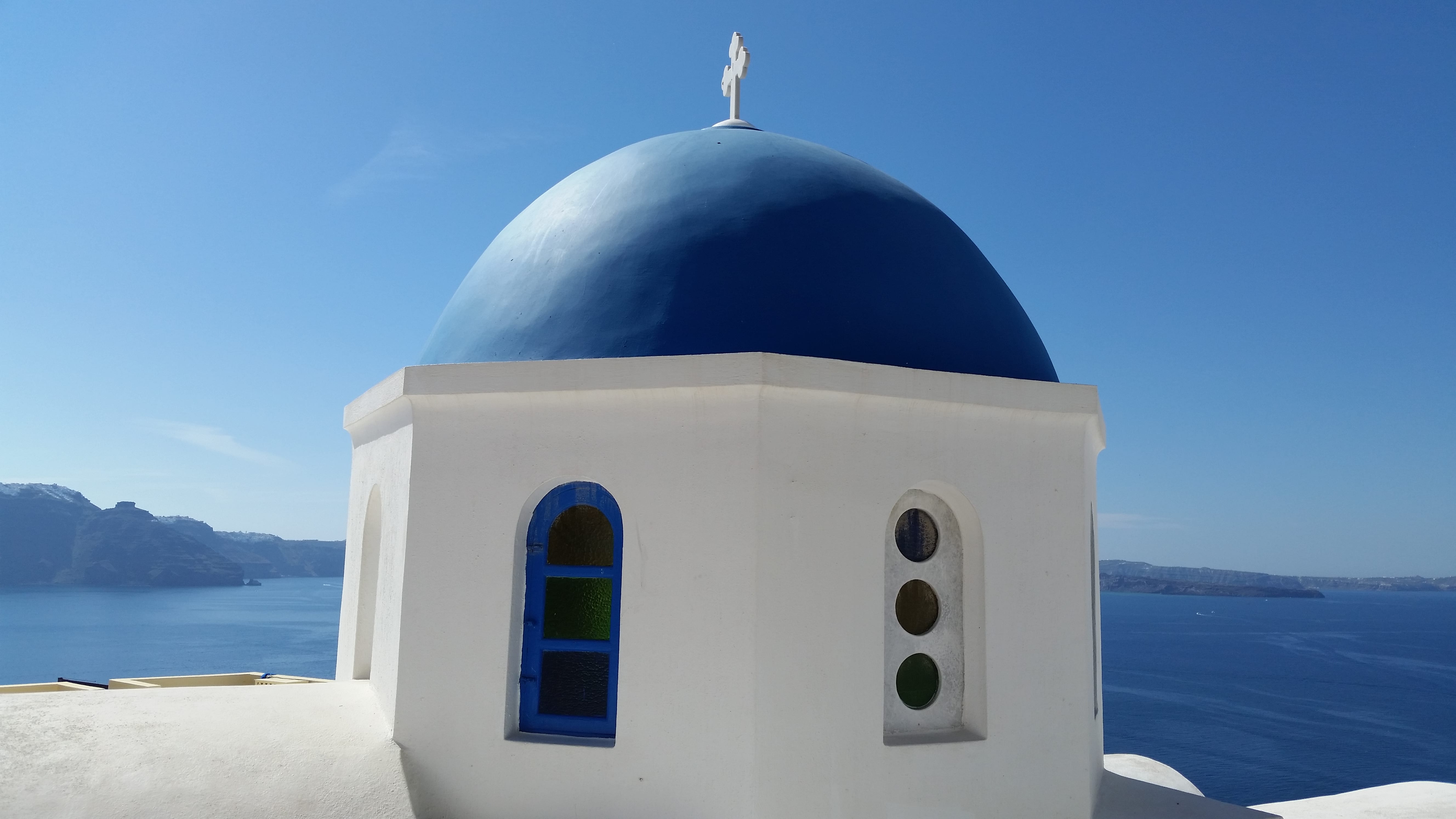 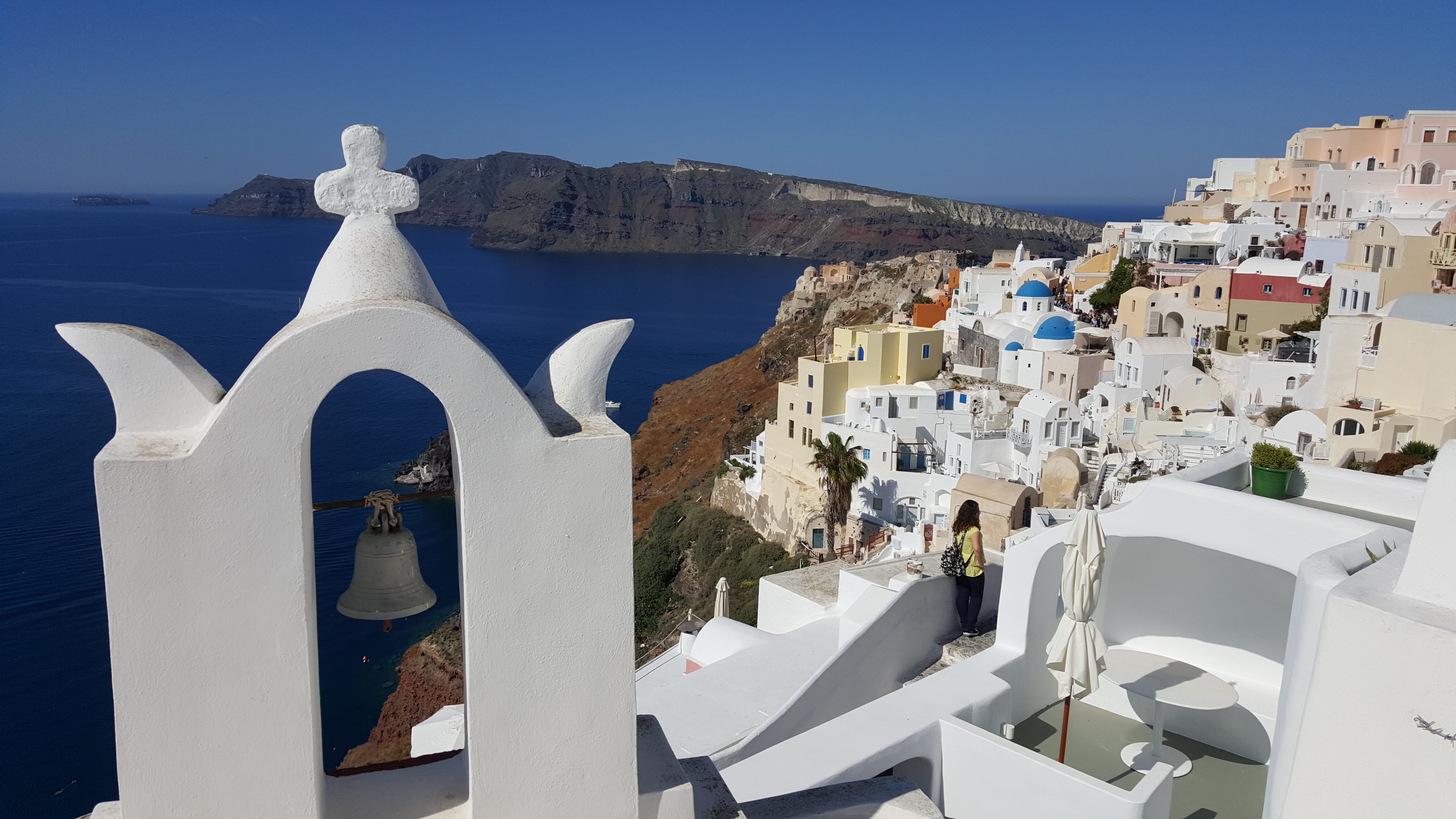 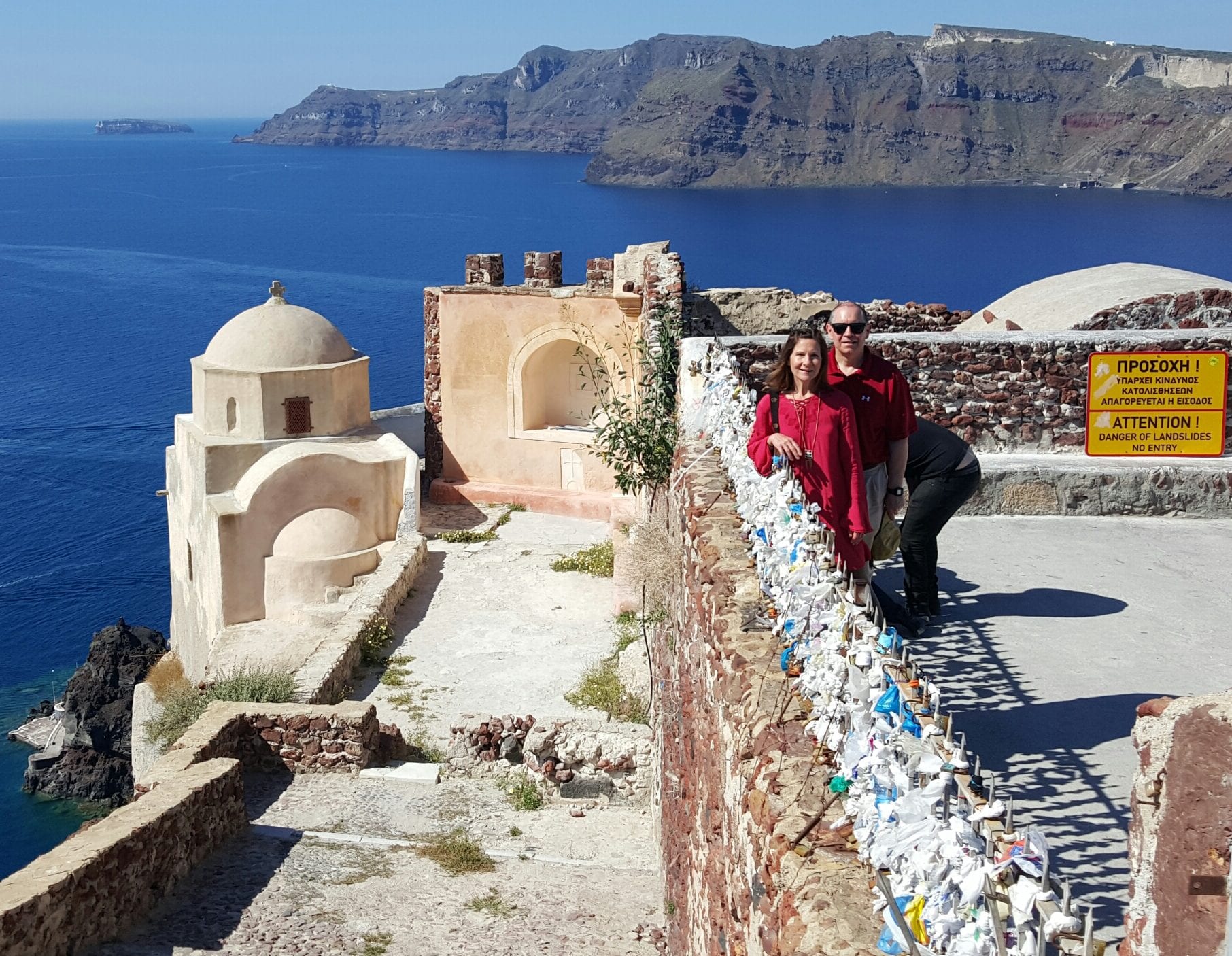 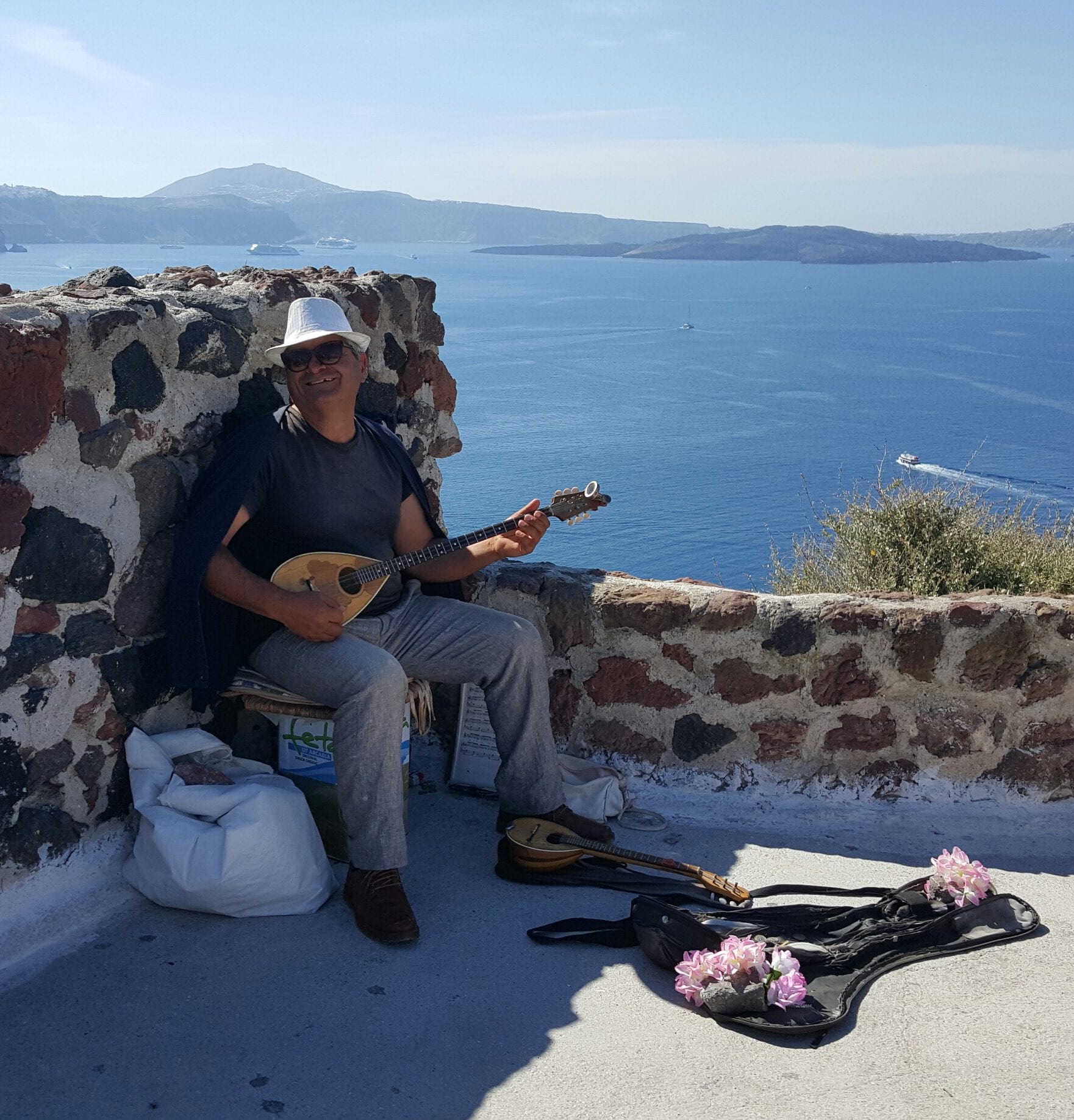 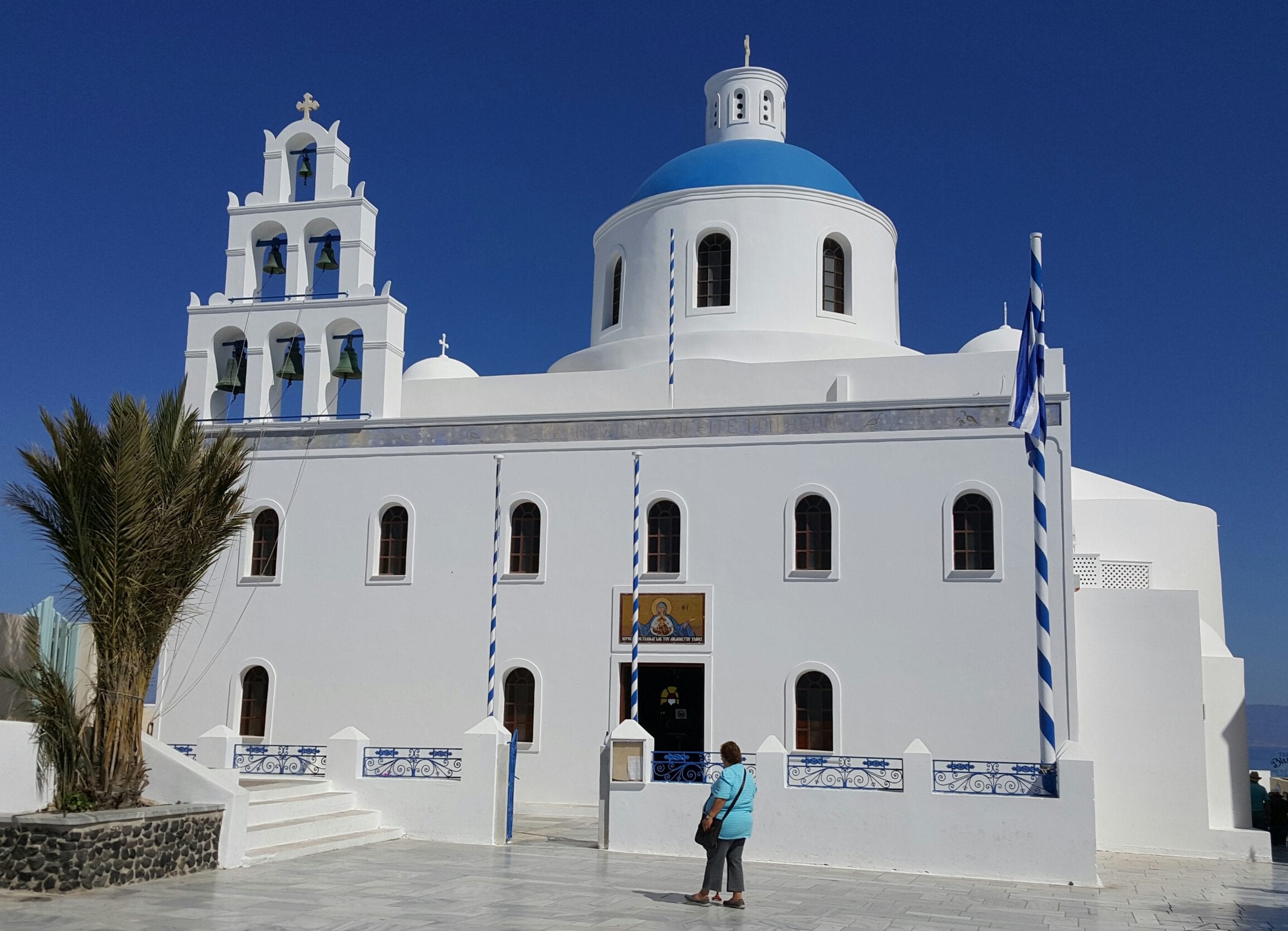 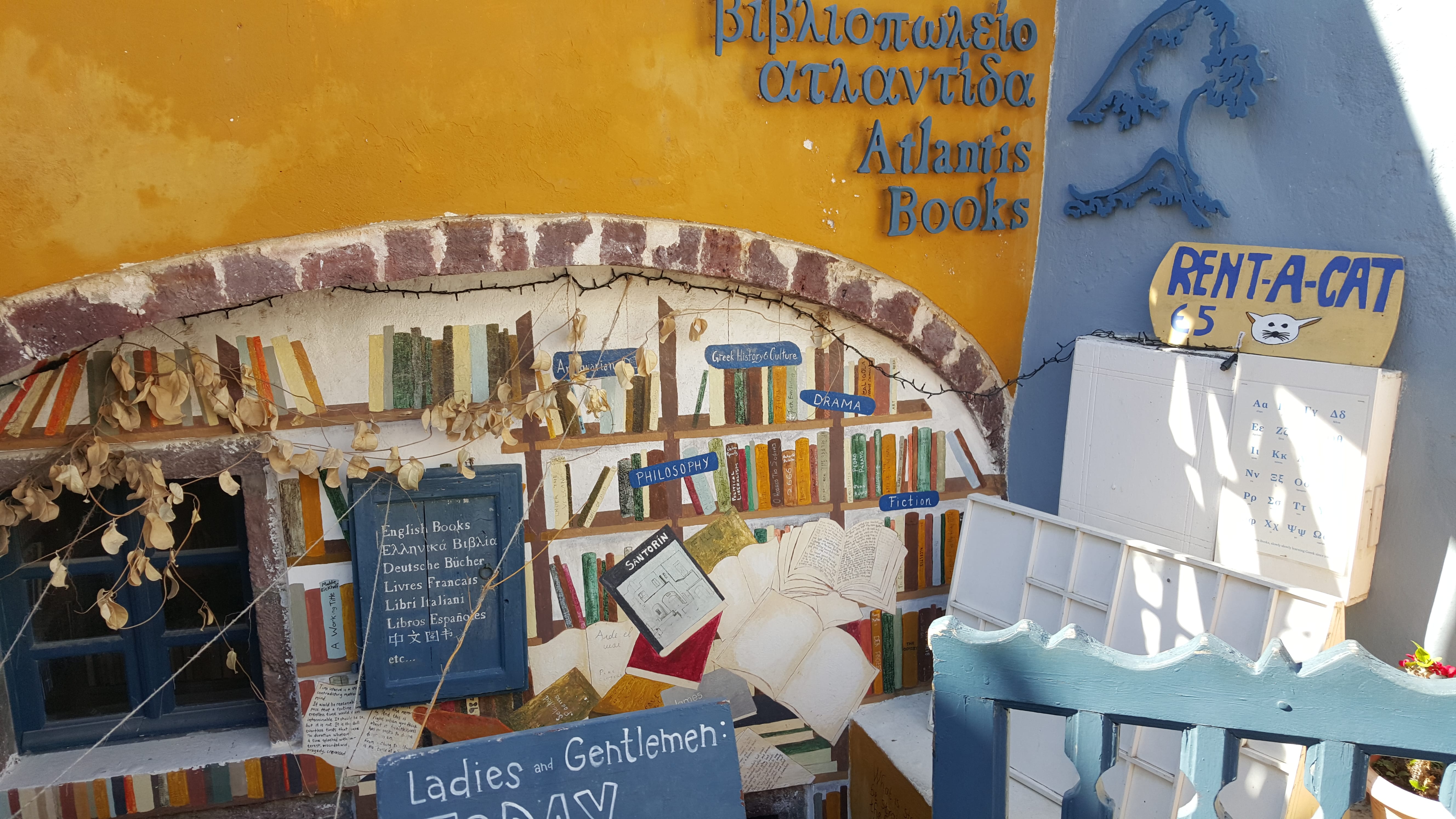 A cozy English bookshop in Oia

Nikolas allowed us an hour or two of free time to explore Oia, take pictures, and maybe get a snack. After jostling through hordes of other camera-carrying tourists, we ended up at a café. Perched on a terrace just this side of a plexiglass barrier overlooking nothing but the sea, Nancy sipped her peach juice and Michael his tonic water, both nibbling on an absolutely delicious künefe (fluffy cheesecake with a filo pastry crust, topped with chopped pistachios and shredded wheat). Time stood still. Michael had delusions of staying here forever. 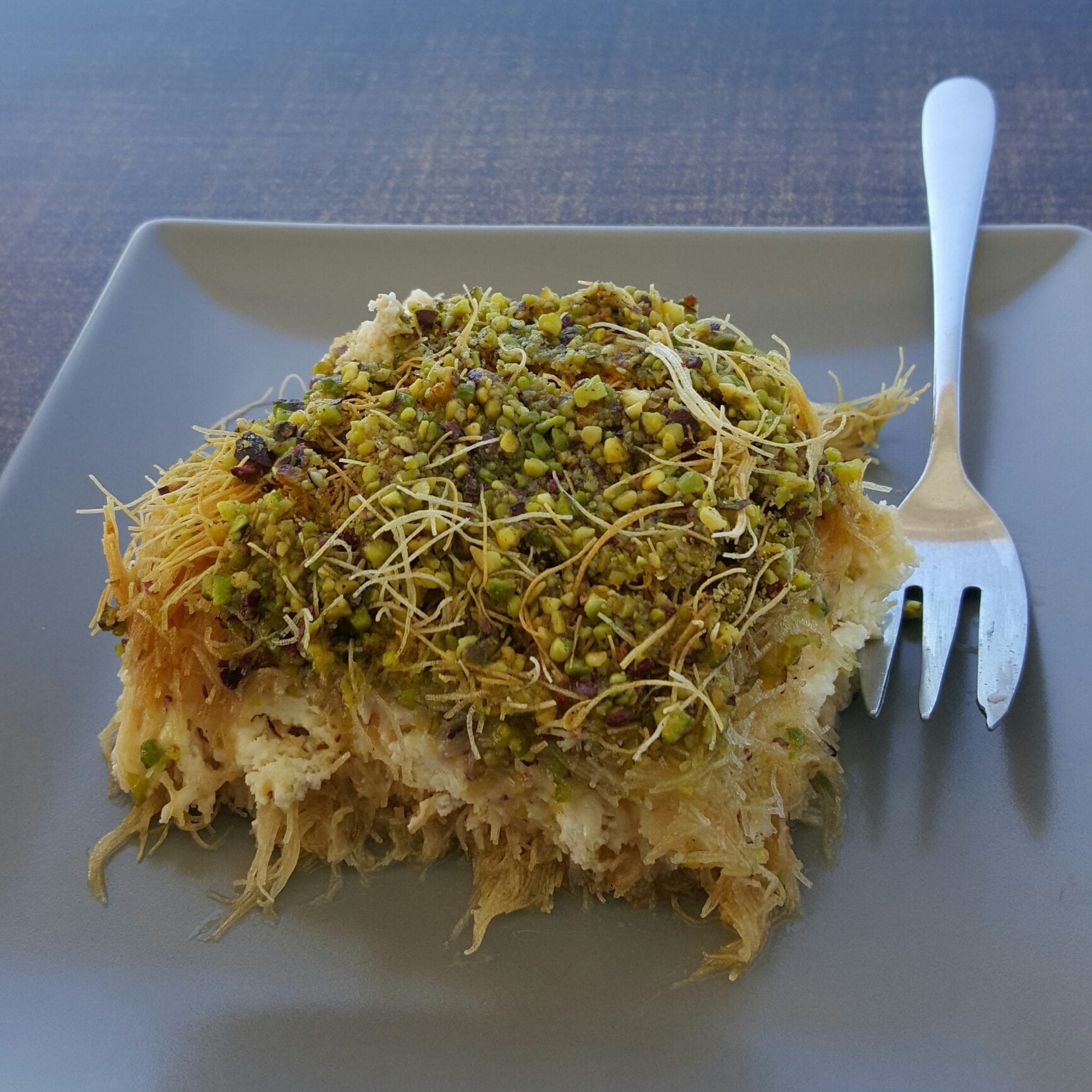 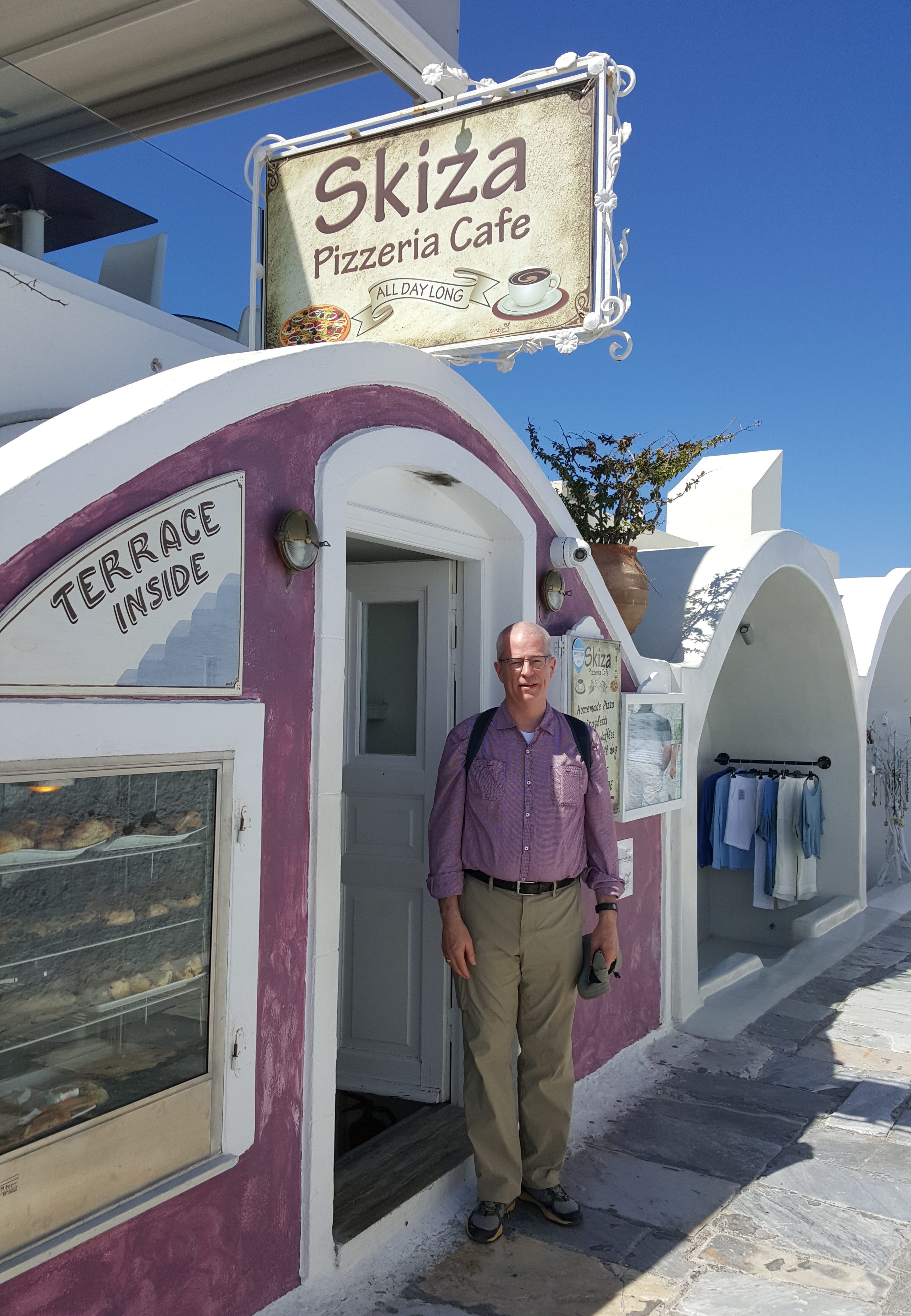 Meanwhile, Nancy was using the free wifi to log onto Facebook. Was it coincidence or an alarmingly astute algorithm that caused a post from John Sotos to appear first in her newsfeed? John, one of Nancy’s earliest elementary school classmates who now has become one of her favorite Facebook storytellers, was always proud to claim his Greek heritage. She sent him a “wish you were here, too” message.

Sadly, time resumed its forward movement and we had to board the bus back to Fira. Reality soon reared its untidy head when a truck came barreling toward us on the one-and-a-half lane road. Iorgos, our bus driver, proved his competence by deftly avoiding what might have been a dreadful collision. Relieved sighs and grateful applause broke out among the passengers. 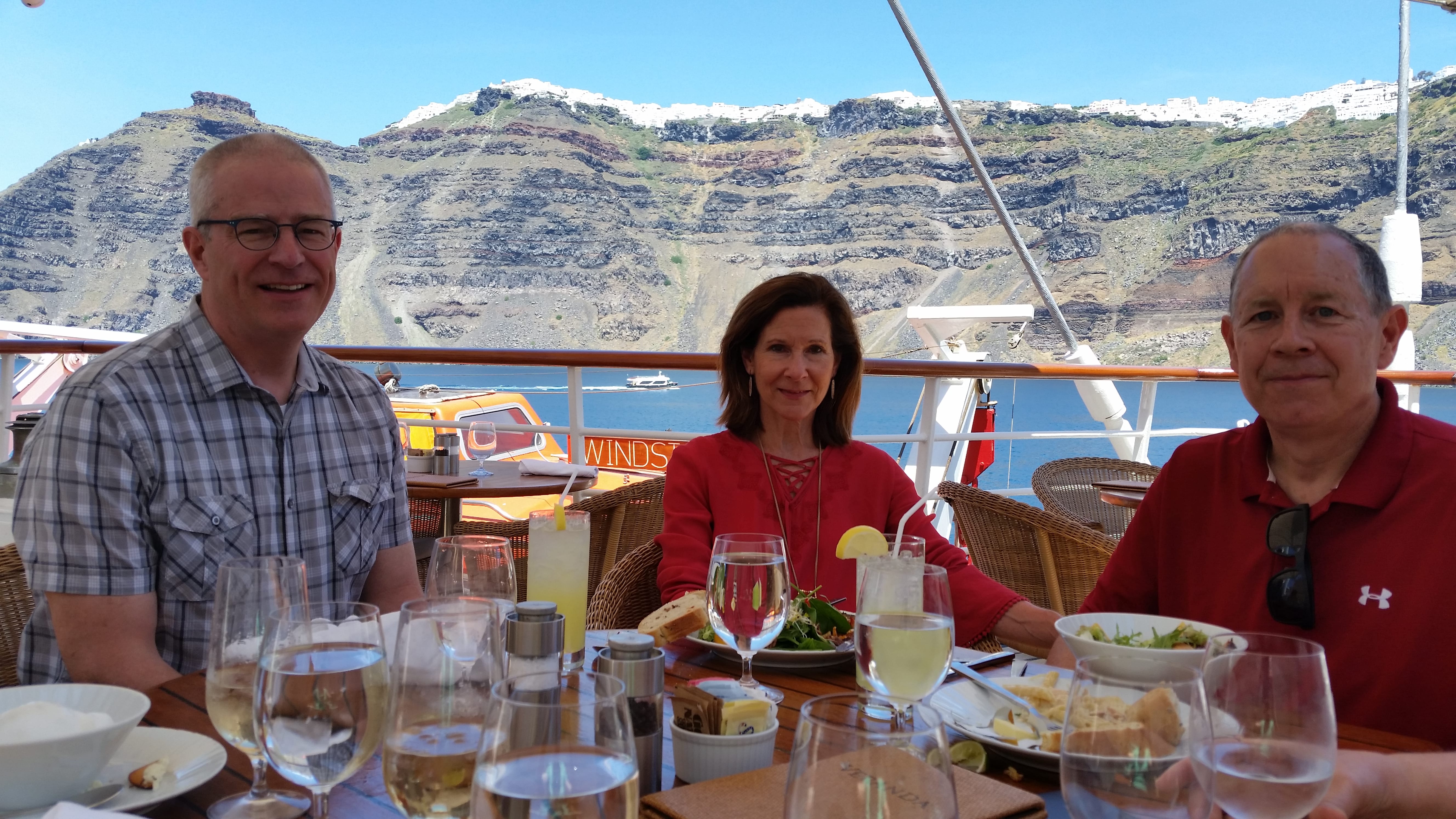 Lunch with Judith and Richard

After returning safely to Fira, we rode the cable car down to the port and caught the tender to the Wind Star so we could eat lunch and change into cooler clothing, as the day had become much warmer than forecast before we left the ship this morning. While assembling a salad from the Veranda’s buffet, Nancy noticed that the captain was standing just across from her, also filling his plate.

“I’m glad to see that they’re giving you some time off from your duties so you can eat,” she remarked.

The captain looked up and replied, “‘They’? Who’s ‘they’? I’m the captain! I can eat whenever I want!” 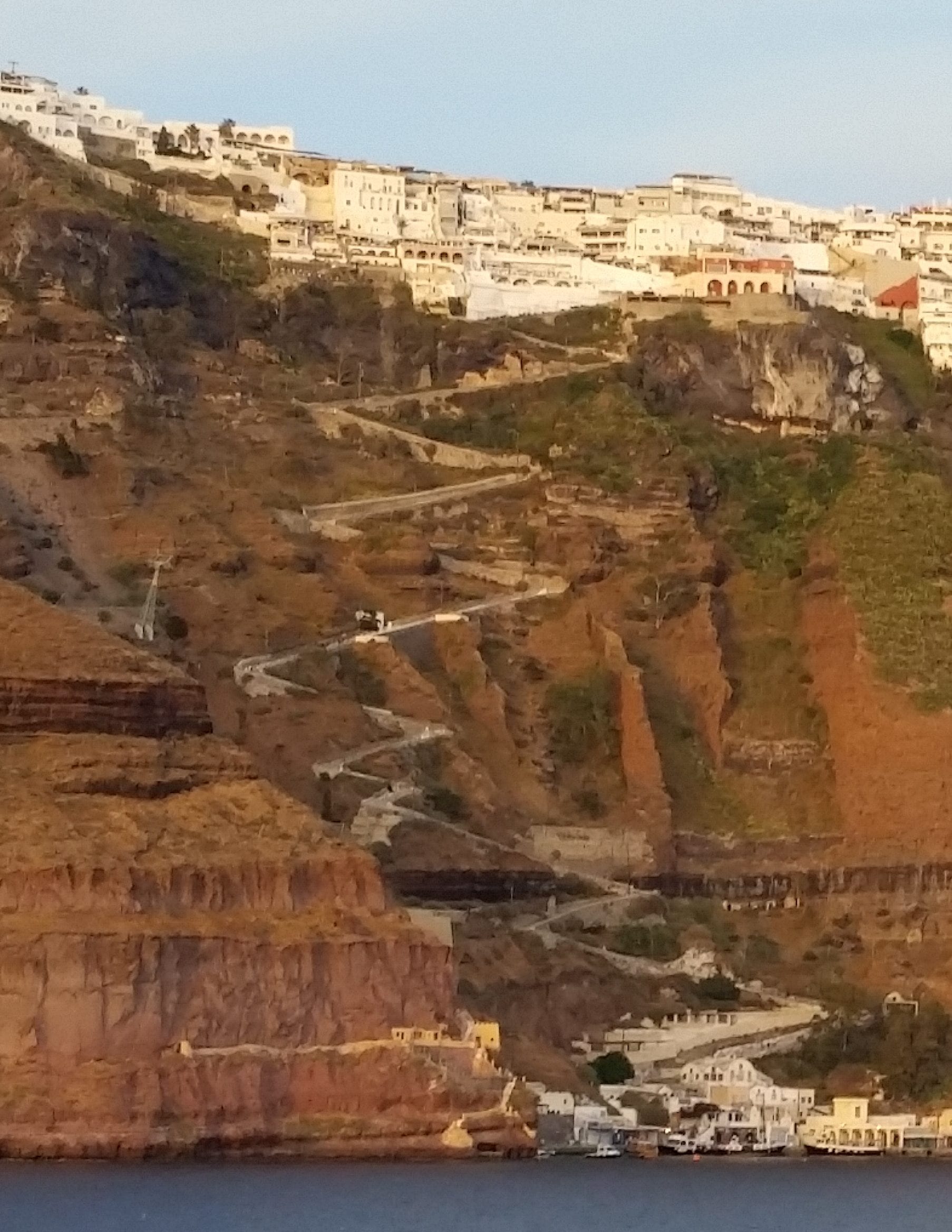 Fira’s Karavolades Stairs zigzag up the cliff from the port

We went back on the island after lunch, intending to do a little shopping and then settle down at a café where we could check our mail, upload photos to the blog, and write. However, Richard and Judith convinced us to join them in climbing up the Karavolades Stairs instead of taking the cable car. This would have been fine had it not been so hot, had there been the least bit of shade, had Nancy been wearing more supportive shoes and not lugging a laptop, and had we not had to share the steps with a train of inconsiderate mules. By the time we got to the top, three-quarters of a mile and 588 steps later, we were exhausted, nauseated by the odor of donkey dung, and irritated by the buzzing of flies–but we made it. 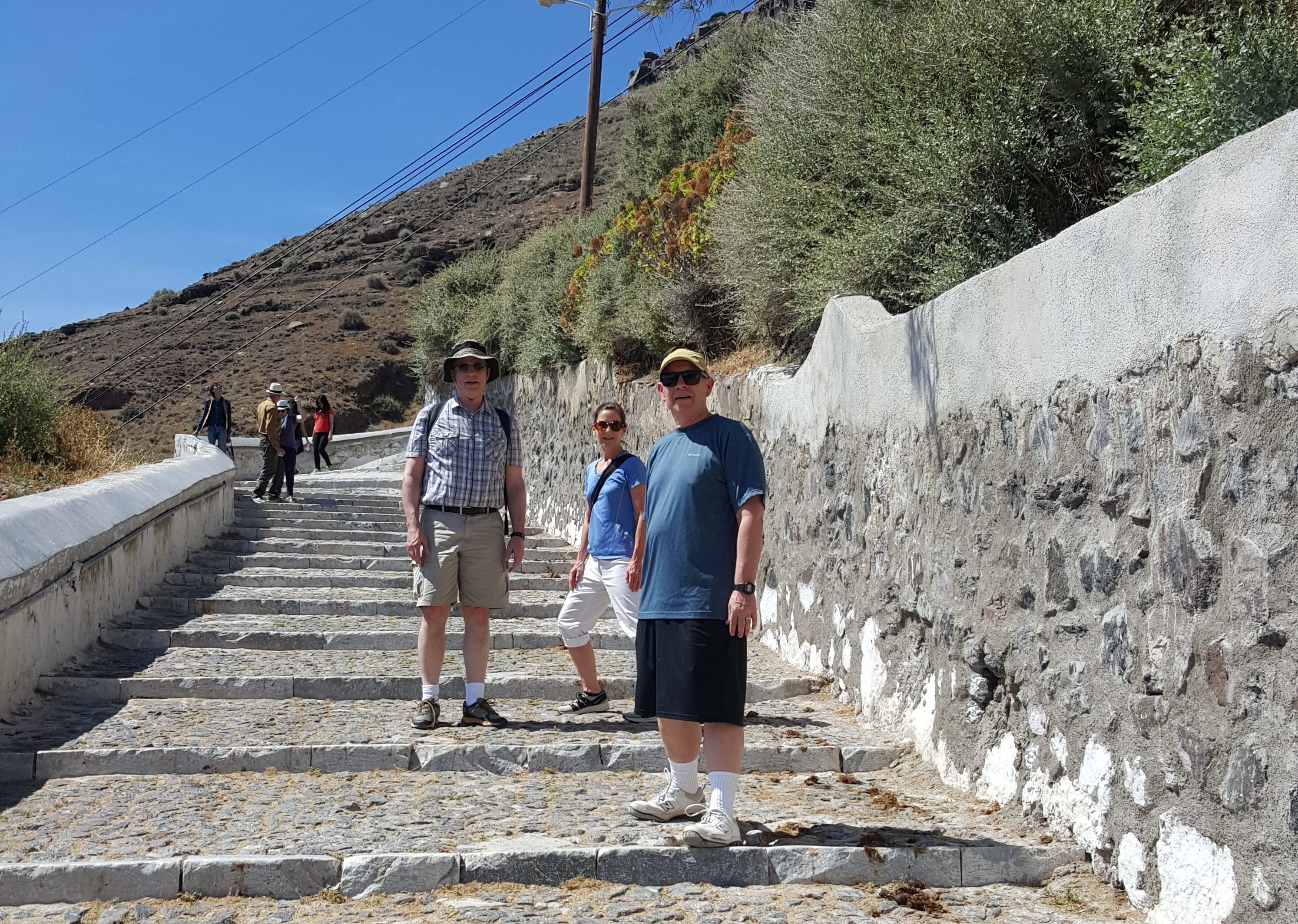 Michael, Judith, and Richard on the Karavolades Stairs

Like the rest of Santorini, the shops and cafés were crowded with noisy tourists, so eventually we retreated into the cool quiet of the Cathedral of St. John the Baptist before heading back down the steps. On the return trip we encountered the man whose job it is to collect all the dung and sweep the stairs clean. Incredibly, he was singing his heart out! 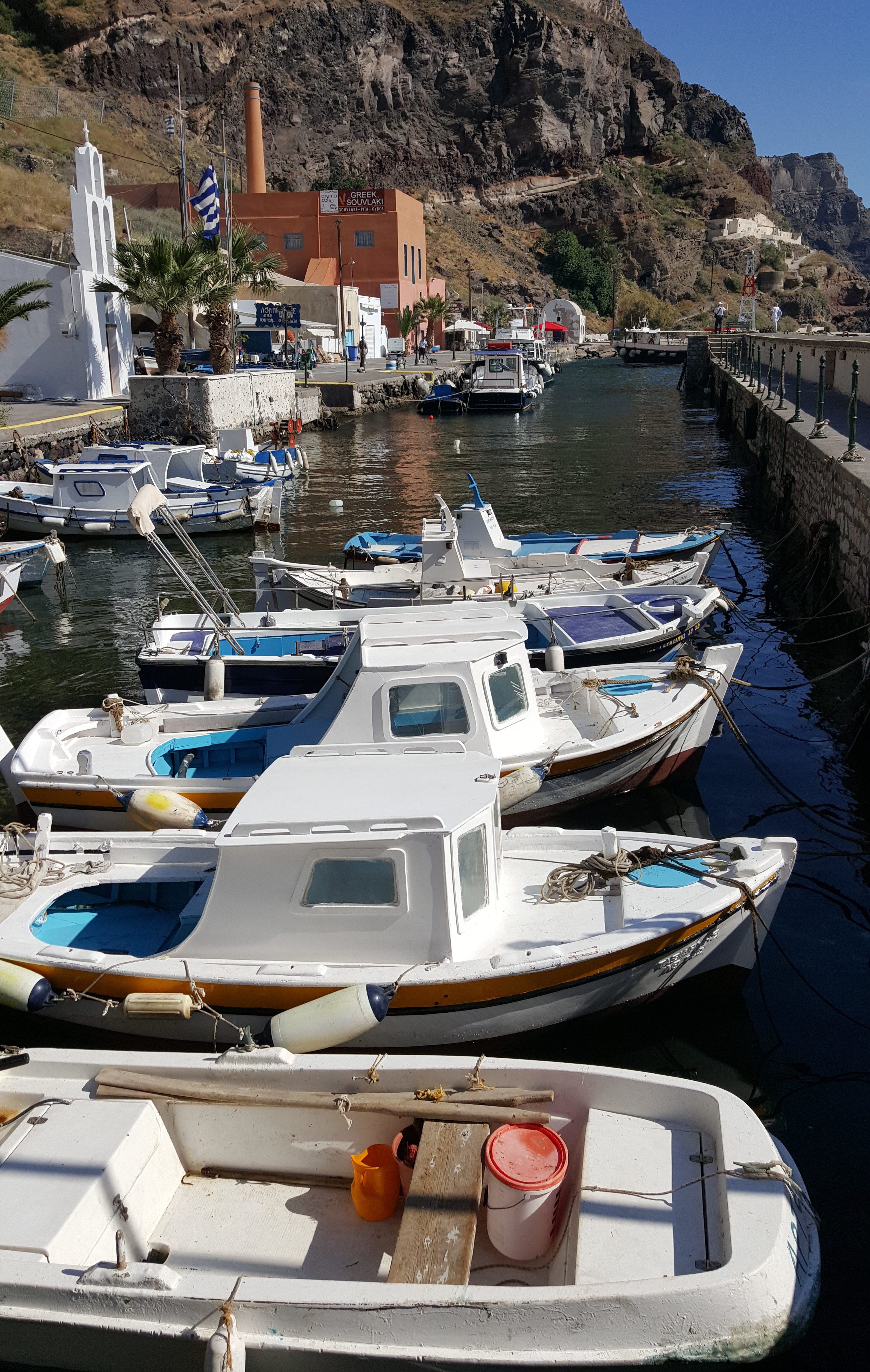 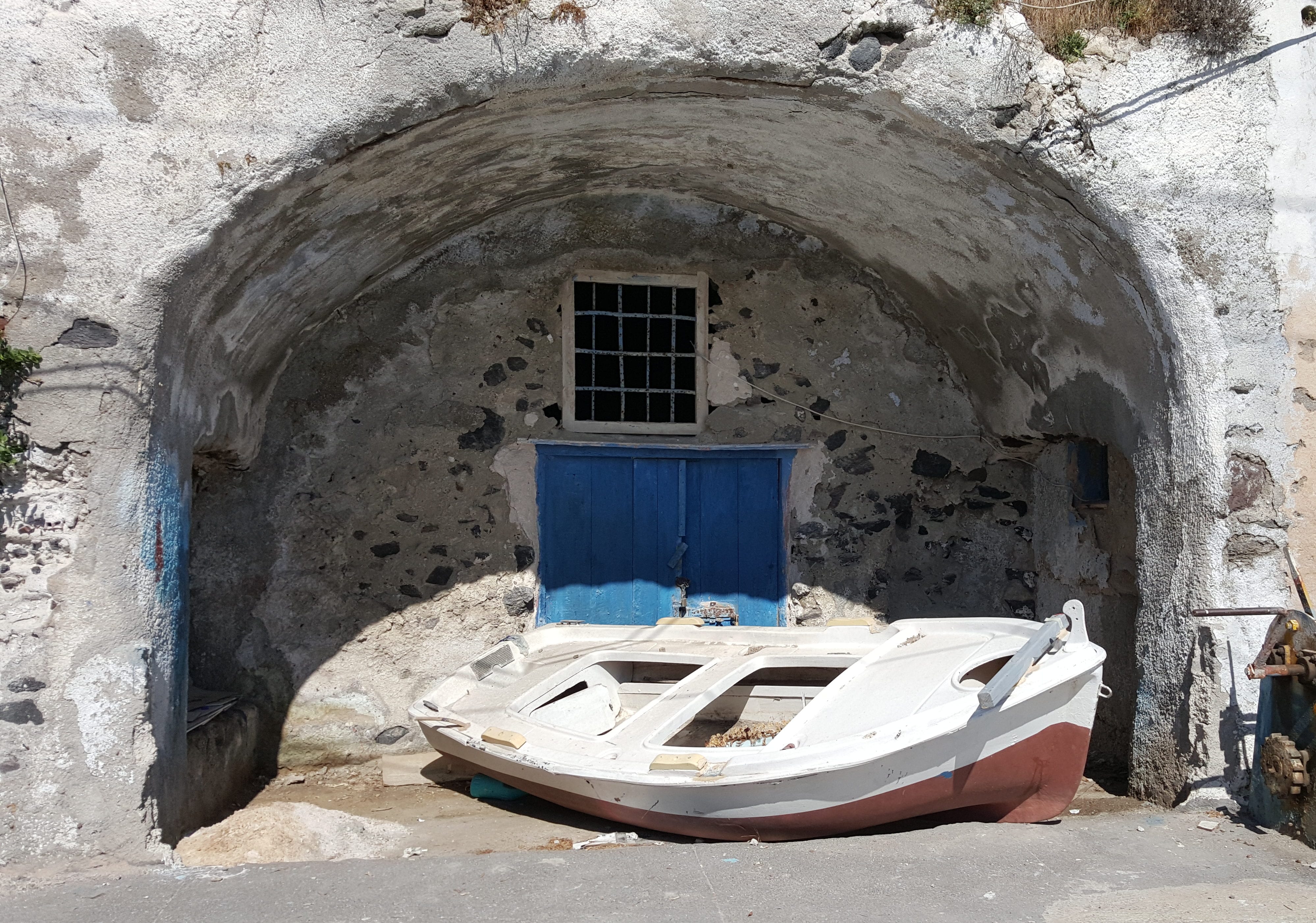 A fishing boat in “drydock” 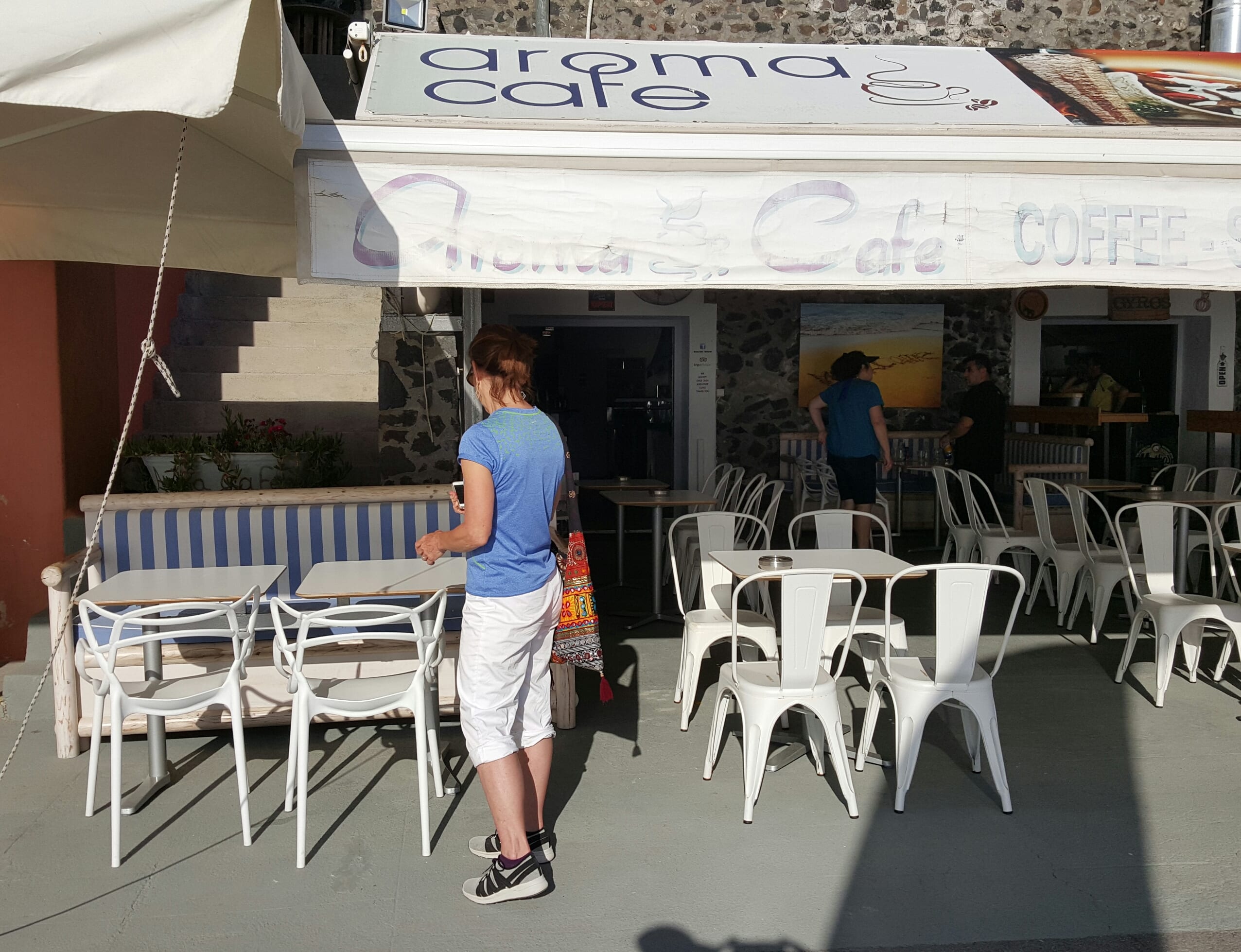 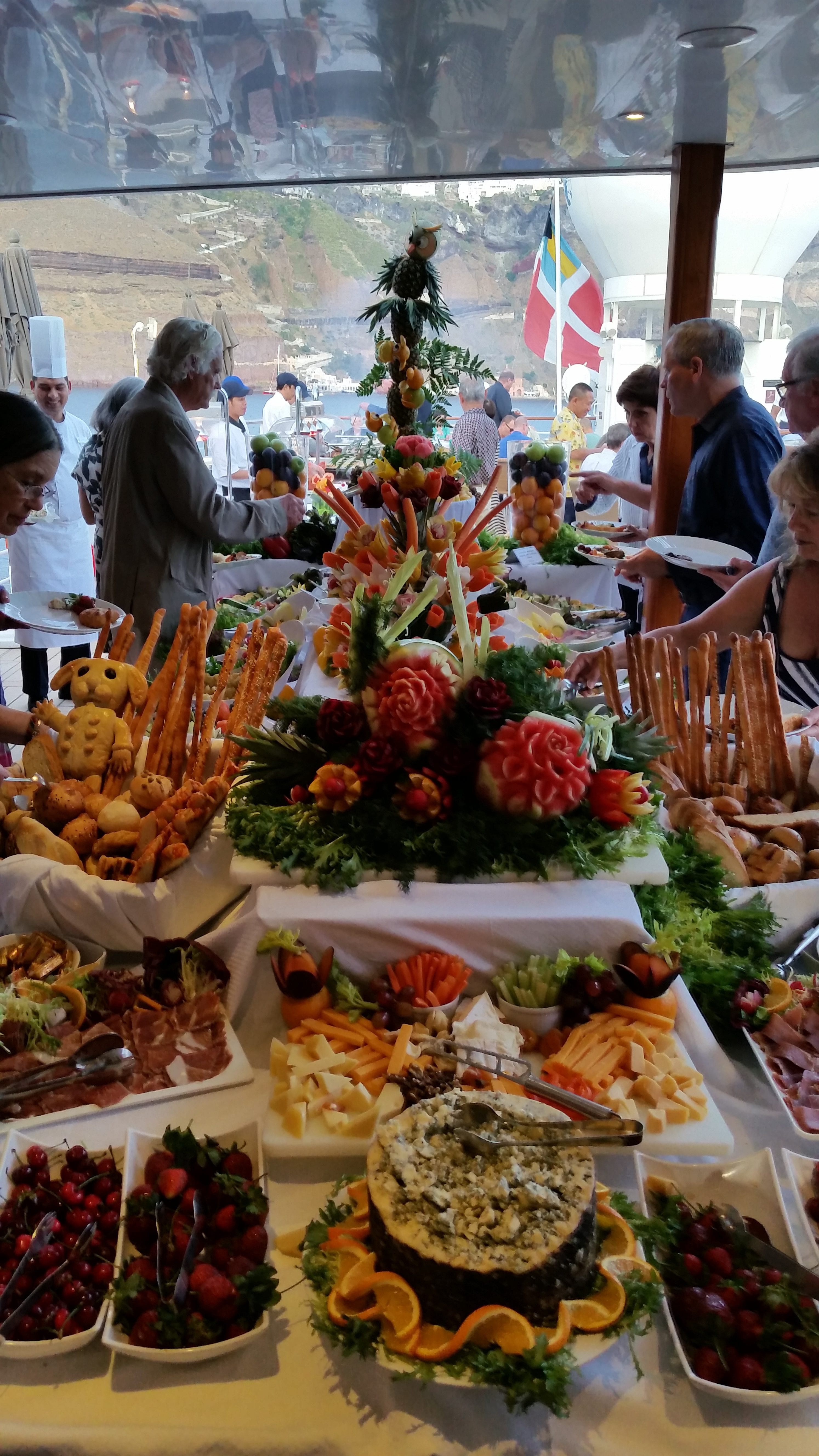 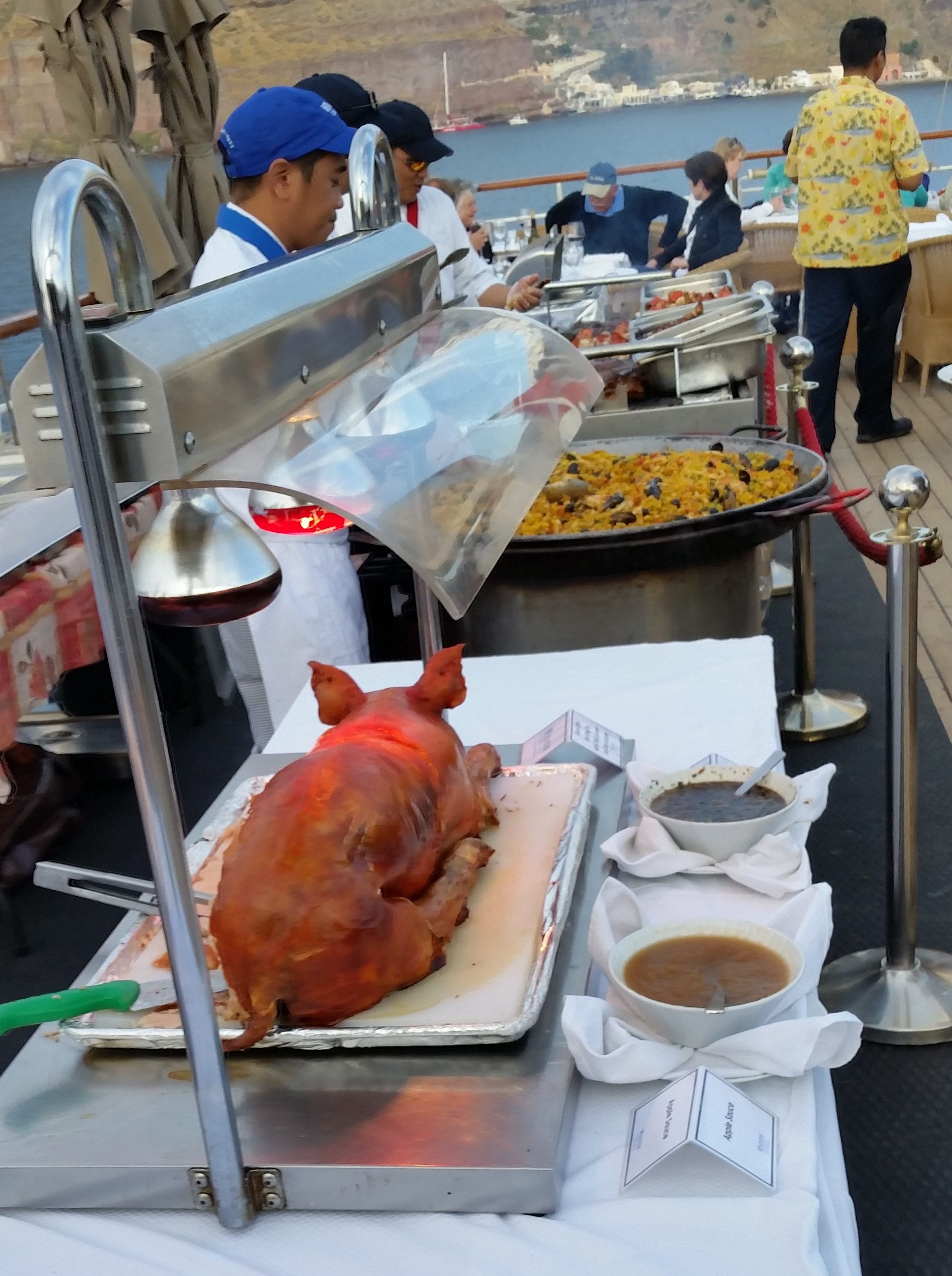 It felt good to take a shower when we got back to the Wind Star. Tonight all passengers were invited to a cookout on the deck, where we could sample all kinds of grilled food. In addition to a slice of beef and a generous helping of grilled vegetables, Nancy chose a lobster tail and a couple of mussels from a large paellera. Unfortunately, the yellow-tinged rice underneath them didn’t taste anything like saffron. Most of the desserts were equally misleading: they looked enticing but weren’t worth finishing. However, tonight’s warm weather made dining al fresco much more pleasant than it had been last night, and the view of Fira’s lights glittering between the deep blue sea and the darkening sky made a very romantic backdrop. 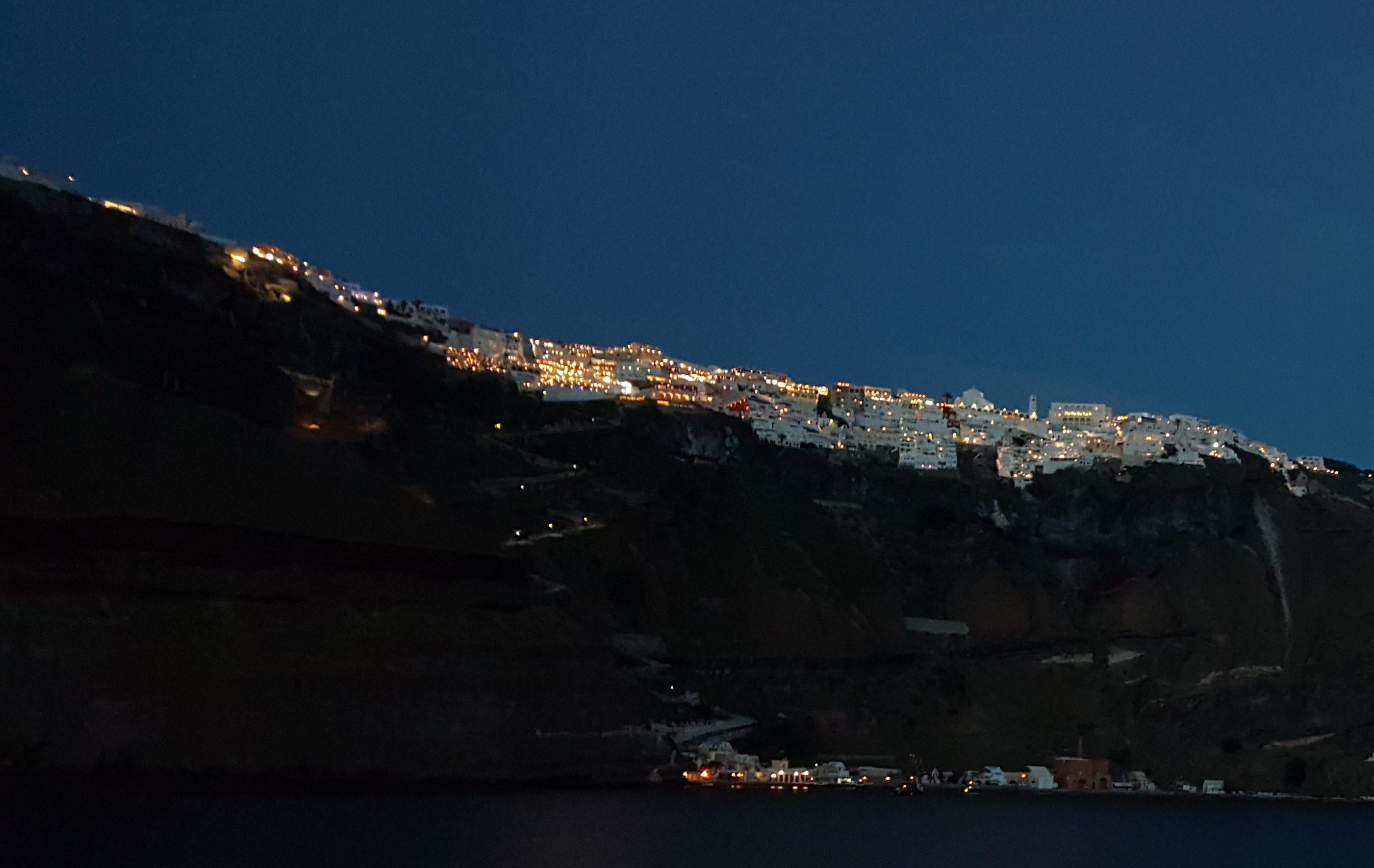 Fira’s lights gleam along the cliffs of Santorini