This morning we awoke in Mykonos, a “classic Greek isle dotted with hundreds of whitewashed churches and thatch-roofed windmills,” in “a harbor bobbing with fishing boats and luxurious private yachts”—some of them “very private,” according to Kevin, the 20-year-old native who would be our guide later in the morning. “We get a lot of famous people, like Cristiano Ronaldo, Lindsay Lohan was here, Katy Perry, the Kardashians.… A lot of times, though, we never find out exactly who those big yachts belong to.”

The mythical celebrity Herakles is believed to have fought giants on Mykonos. Historically, Mykonos–like most of the islands in the Aegean–had been ruled in succession by the Romans, the Venetians, the Ottomans, and even by the pirate Barbarrosa before the Greeks won independence. The Wind Star was still rocking as much this morning as it had been last night. In the shower, watching the water at our feet slosh back and forth, we finally understood the reason for the two drains. At breakfast, we sat with Jody and Dyrk and decided to order French toast from the menu–an excellent choice, because it was some of the best French toast we’ve ever been served. The tailgate produce market on the pier in Mykonos; this is about as far into town as a pickup truck can get

Today, either because the water near the pier is too shallow for the Wind Star or because those private yachts take precedence, we had to be tendered back and forth between the ship and the shore. Thank heaven there were firm hand rails on the open stairs from the Wind Star down to the tender boat, or Michael might have had to spend the day aboard the larger vessel. (He has a really hard time when he can see water moving way below his feet.)

We spent the morning with the whole Gee Group on a walking tour of Mykonos Town, led by the aforementioned Kevin. Our first stop was at the statue of Manto Mavrogenous in the central square. This rich, beautiful, heroic woman devoted all her resources to the fight for liberation during the 1820s and 30s, equipping soldiers, outfitting ships, and persuading other wealthy Europeans to aid the Greek cause. After the war, with her fortune spent, and estranged from her family because of her politics, Manto died destitute and forgotten. The people of Greece have since rescued her from oblivion and given her the honor she deserves. From Mavrogenous Square, Kevin led us into a labyrinth of narrow alleys defined by stacks of the blocky, whitewashed-stucco buildings that characterize Mykonos; Kevin explained that residents deliberately made their town difficult to navigate to confuse marauding pirates. Today, local regulations require property owners to maintain the island’s distinctive style, so they express individuality with the colors they choose for their wooden doors and shutters, and with the flowers they plant in windowboxes and hanging pots. Kevin told us that housing prices on Mykonos run about €8000 per square meter; we really wish we could see the kinds of interior features that come with those price tags. Cats freely roam or lounge wherever they want

Cars are not allowed in the center of town–it’s not hard to see why–so residents must park in public lots on the outskirts and then either walk or motor-bike to their dwellings. We saw several people pulling hand trucks loaded with groceries, and every now and then, a four-wheel ATV transporting big boxes or furniture. All this inconvenience serves to keep Mykonos quaintly picturesque and therefore attractive to tourists. Kevin admitted that the island has become completely dependent on tourism; business basically shuts down and most of the population moves elsewhere during the winter months. This windmill operates the pump for a well Original mechanical equipment inside a windmill Joyce stands at an old well overlooking the harbor. Notice the prickly pear cactus–typical vegetation on this arid island

The ranks of charming sixteenth-century windmills standing guard over Mykonos testify that the islanders used to be more self-sufficient. While none of the mills actively operates anymore, at least one still contains its original mechanical equipment. Near one in the upper part of the town, we saw the communal oven where the locals once did their baking. Water wells in a central part of town

Some mills were used for drawing well water as well as grinding. Natural sources of fresh water are scarce on the island–another reason for vacating during the winter. Kevin explained that water from a few local wells, a nearby reservoir, and a coastal desalinization plant is used for washing and other utilitarian applications, but most drinking water has to be brought from the mainland. (Consider what that means for the folks who can’t unload their cars in a driveway adjacent to their homes.)

Schoolchildren playing and dancing at recess

One of the highlights of our walking tour was hearing the shouts and laughter of schoolchildren at recess. We also could hear some lively music coming from the schoolyard, and when we peeked over the fence, we discovered that many of the children had formed a circle and were performing a traditional dance. Judith, a professional dancer and choreographer, was particularly entranced not only by their simple steps and patterns, but also by the joy they expressed. Seeing the school also provoked Judith to raise an interesting question: “Students in the U.S. spend a few hours each week studying America’s not-quite four hundred years of history. How much time do Greek students devote to learning about more than four thousand years of history?” Jim and Kevin stand in front of a rustic winepress 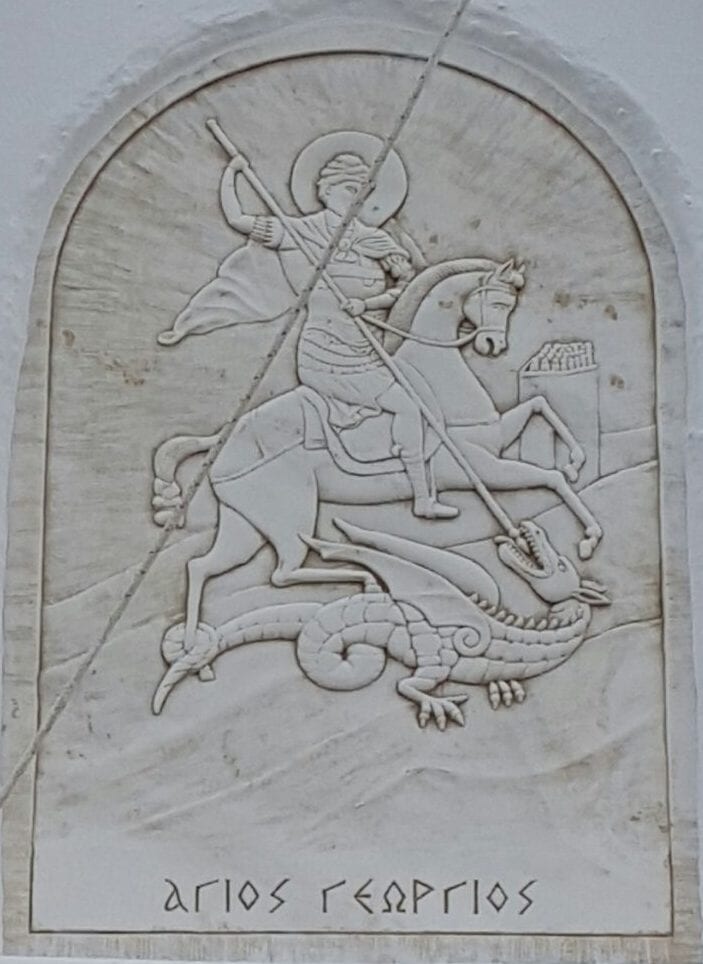 The legend of St. George slaying the Dragon is a popular theme in Greek Orthodox art St. Barbara was an early Greek martyr whose pagan father tortured her for accepting the Christian faith Judith glows like the candles in a small chapel dedicated to St. Barbara Monastery of the Holy Virgin in Ano Mera

About mid-morning, Kevin led the group to the edge of town where a bus could pick us up for a tour of more distant parts of the island. The countryside looks something like the rural areas of Southern California that Nancy had known when she was a little girl, before the mustard weed, sagebrush, and prickly pears were lost to subdivisions and shopping centers. One key difference: the fields and hillsides of Mykonos are divided into a crazy quilt of randomly shaped pieces by a network of low stone walls. “What are all the walls for?” we asked Kevin. He explained that they mark property lines; but while some enclose vineyards, or small farm houses and associated outbuildings, most seem to surround only patches of undeveloped land. Fountain in the monastery’s courtyard The garden behind the monastery is filled with semi-tropical plants

We made a brief stop in the village of Ano Mera, located in the center of the island, to visit the eighteenth-century Monastery of the Holy Virgin (and take a bathroom break).

Jim, Mark, and Dyrk wait for others to finish visiting the monastery We made another brief stop at Elia Beach, nearly deserted on this cool, gray, blustery day After having passed many, many small churches along the road–Kevin told us that there are over six hundred on Mykonos, serving a population of about ten thousand–someone asked, “Why so many?” Kevin explained that most of them are tiny chapels attached to private homes, used primarily as burial places. Traditionally, the body of the deceased is placed in a stone sarcophagus; after three years, the oldest woman in the family removes the bones, washes them, and then places them in a smaller ossuary within the family mausoleum. (Nancy is grateful that this is not part of American funerary tradition.)

Our bus tour ended on a hill back in Mykonos Town where we could get a great panoramic view of the harbor. A few big raindrops fell as we waited for our turn to climb inside a nearby windmill, but not enough to warrant putting on raincoats. Some of the group opted to stay in town for lunch, but we–along with Cathy, Jeff, Lynn, and Mark–decided to take the tender back to the Wind Star and eat at Veranda. In addition to the standard stations for salads, soups, breads, and desserts, the lunch buffet includes a station for a daily hot special such as pasta, fajitas, or falafel. Between the six of us, we probably sampled a little of everything.

Watercolor of Santorini by George Papadoperakis; the 80-year-old artist was born in Crete but now lives in Athens Among the many shops in Mykonos was one named Pure White, containing many fashions that LDS temple-goers would appreciate After lunch Michael and Nancy went back into town to take a closer look at some lovely watercolors that had caught our eye during the walking tour. We bought a small one depicting a classic view of Santorini, which we look forward to seeing for ourselves in a few days. We also found some cute floral headbands for our granddaughters and pirate T-shirts for our grandsons. There is no shortage of souvenir shops on Mykonos. For some reason, all the proprietors speak English, and they all accept credit cards.

We had to get back aboard the Wind Star by 5:00 this evening because our group had been invited to a private happy hour hosted by the cruise directors on the top deck. The captain made a brief appearance but left for the bridge soon afterward so he could get the next leg of our voyage underway. The clouds that had grayed our morning blew away during the afternoon, so both the sky and sea were brilliant blue as the sun moved toward the horizon. While we enjoyed our canapés and drinks (non-alcoholic, of course) on the upper deck, Eva and Barry showed off the jewelry they had purchased today to celebrate their anniversary: matching gold wedding bands etched with a meander: the classic Greek symbol for eternity. Yusuf was our server in the AmphorA dining room again tonight. Michael chose to start dinner with lemon quinoa salad, followed by a plate of Chicken Satay and some other Indonesian specialties, with a chocolate croissant creme brulee for dessert. (Michael cannot resist chocolate croissants; he’s also had one every day for breakfast on this trip.) Nancy dined on wild mushroom soup, braised lamb shank with carrots, and a marvelous grand marnier soufflé. Our tablemates–Nan, Keith, Cathy, Jeff, Linda, and Budge–told us that they had spent two hours over dinner last night trying to solve the conundrums of tax reform; tonight we tried tackling health care reform, with similar non-success.

Tonight the moon is almost full. It should be perfect our special “Destination Discovery” event tomorrow evening!