Travel to and Exploring Athens

Travel to and Exploring Athens

Ninety minutes before arriving in Paris, the Delta crew woke everyone who was fortunate enough to have fallen asleep; the rest of us just continued to look at them with glazed eyes. Breakfast was cold and unremarkable except for the Noosa honey yogurt, which was so good that Michael asked the attendant for an extra cup. We had arrived early and no gate was available, so he had plenty of time to eat it. We weren’t very worried about making our connecting flight because it wouldn’t leave for about an hour and a half.

When we disembarked, we learned that the gate for our connecting flight was in another terminal at the other end of the airport. Fortunately, there was a tram, but then we remembered that at CDG, you not only have to go through customs and immigration, but you also have to go through security again. For no apparent reason other than that this was France, half of our group was directed down a high priority corridor, while the rest of us were shunted into what can only be described as un grand pagaille: a room as big as a football field, where more than five hundred players were competing to score a goal. Only six of the twenty customs booths in the end zone were open, and only two of those were open to those of us on the non-EU team. A few officials were trying to referee this melee, but what we really needed was a coach to help us plan a drive through the chaos of unlabeled queues.

Much later, with many, many yards still to go and only minutes left on the clock, we realized that the Cincinnati team was about to lose this game. Then Budge, several yards ahead of us in the interminable line, spotted an opening: the high priority corridor on the far side of the maze of retractable belts was nearly empty. We watched as he deftly loosened the belt from the nearest stanchion and waved Linda though to the other side. The rest of us exchanged glances, then swiftly followed Budge’s lead, working our way to the same corner of the maze and slipping into the priority lane. The airport staff looked our way but said nothing; we moved as if protected by a cloak of invisibility. Now, only a few people stood between us and the goal.

Once our passports had been stamped, we had only seven minutes to reach the plane before our scheduled departure time. We ran up the stairs and down the corridor faster than should be expected of card-carrying AARP members, but we made it—thanks to the members of our group who had been directed to the priority lane in the first place and told the gate crew that we were on our way. We were so relieved to be in our seats that we didn’t even mind that they were on the back row and would not recline. 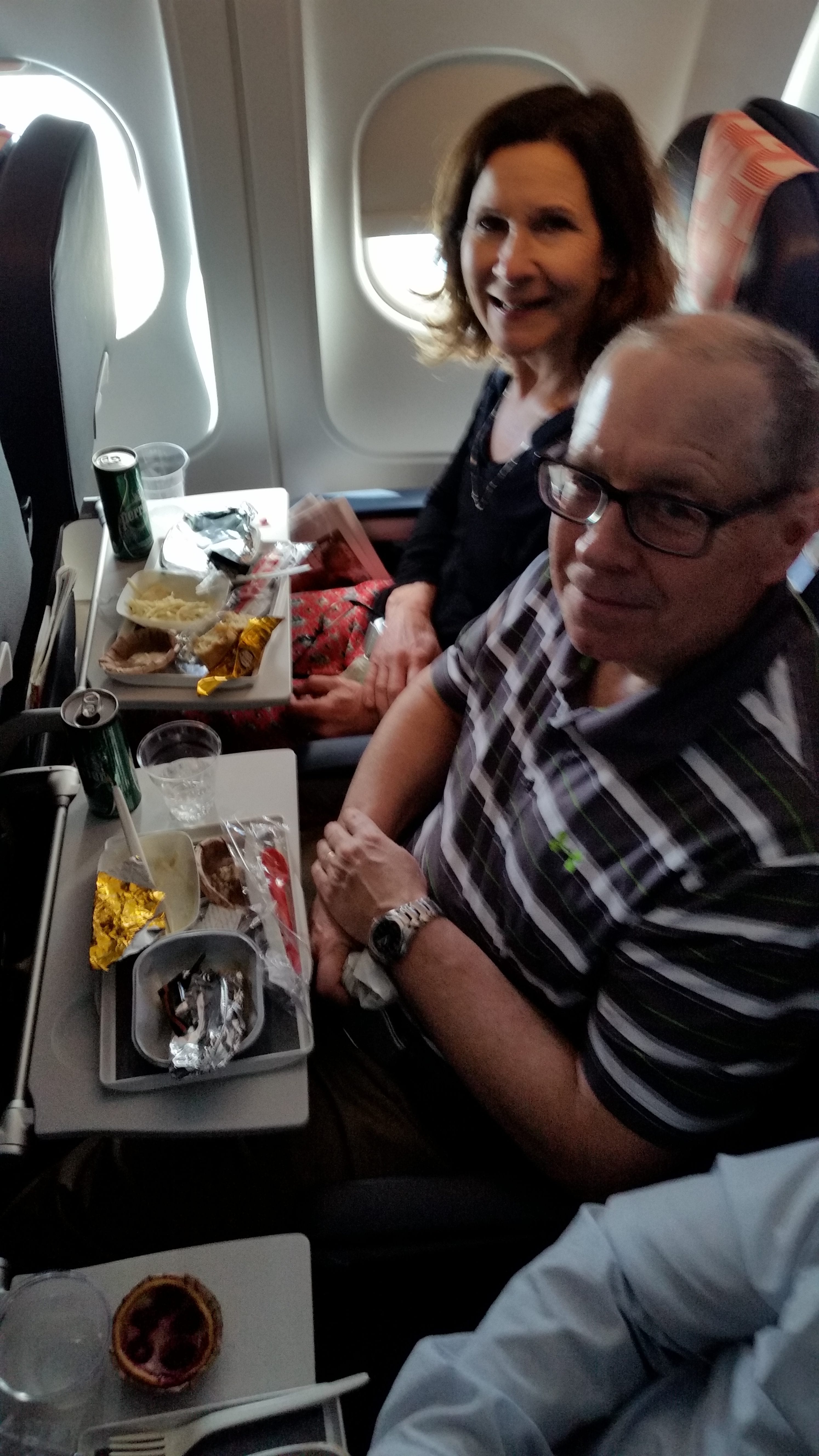 Because this was an Air France flight, the hot lunch was actually good—especially the raspberry tarte. However, the plane’s lone bathroom was located immediately behind us, so the aisle was always occupied and the resulting bustle made sleep nearly impossible. The five-hour flight to Athens left us bleary-eyed and ready to have nothing more to do with air travel for a long time.

In contrast to our experience in Paris, getting through customs in Athens consisted of collecting our luggage then stopping briefly to answer two questions put by a customs agent holding an iPad: “What is your country of origin?” and “What country did you fly through?” She entered our responses into her device and told us to have a good day.

Soon we spotted a woman carrying a sign that said “Jim Gee Group,” and soon after that, we were hugging Cathy and Jeff, who had arrived from Arizona 30 minutes earlier. Karen, the guide, ushered us into a van, and fortunately did not make us wait for the rest of the Discovery XA group, who would be arriving two hours later. As we drove through Athens toward our hotel, Karen pointed out historic monuments and taught us some essential Greek phrases: kalimera (good day), kalispera (good evening), efcharisto (thank you), parakalo (please/you’re welcome). “Very important,” she warned. “When you want to say no, say ochi, not ‘no,’ because no sounds more like the Greek word for yes, so if you say ‘no,’ someone may think you mean yes, and that could get you into trouble. Especially the women.” 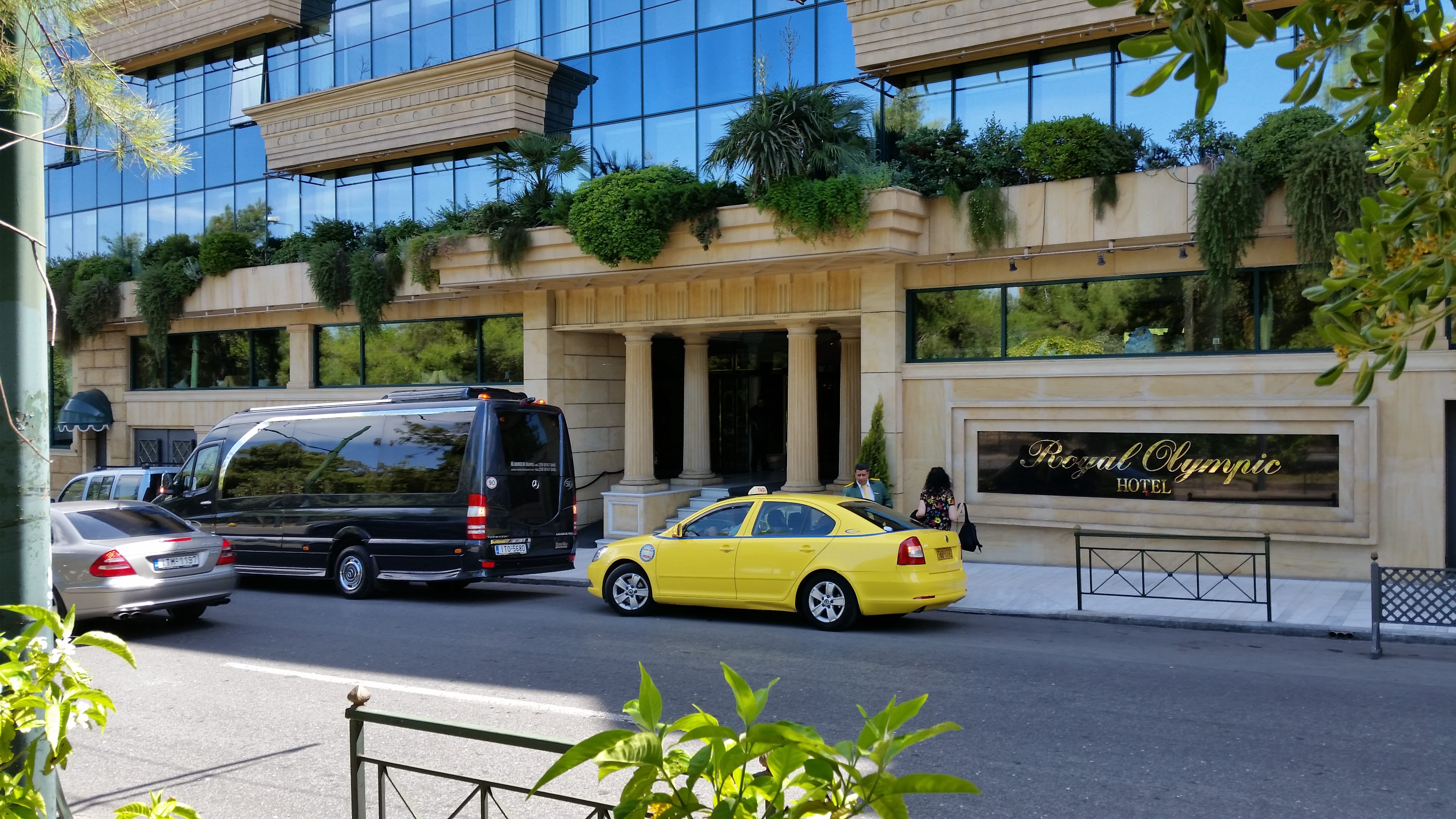 The Royal Olympic Hotel in Athens

The Royal Olympic Hotel is in central Athens, directly across the street from the ancient Temple of Zeus and just around the corner from the Plaka, the main marketplace of the old city. Jim and Carol Gee were in the lobby to greet us and get us checked in. After a brief orientation, we were on our own, basically, for the rest of the evening. We had been assigned a room across from Cathy and Jeff, so we planned to meet them an hour or so later. Although the guide had advised us to resist the temptation to lie down and just push through our jet lag until about 9 p.m. (Athens is seven hours ahead of EDT), all of us ignored her counsel and took a much-needed nap. 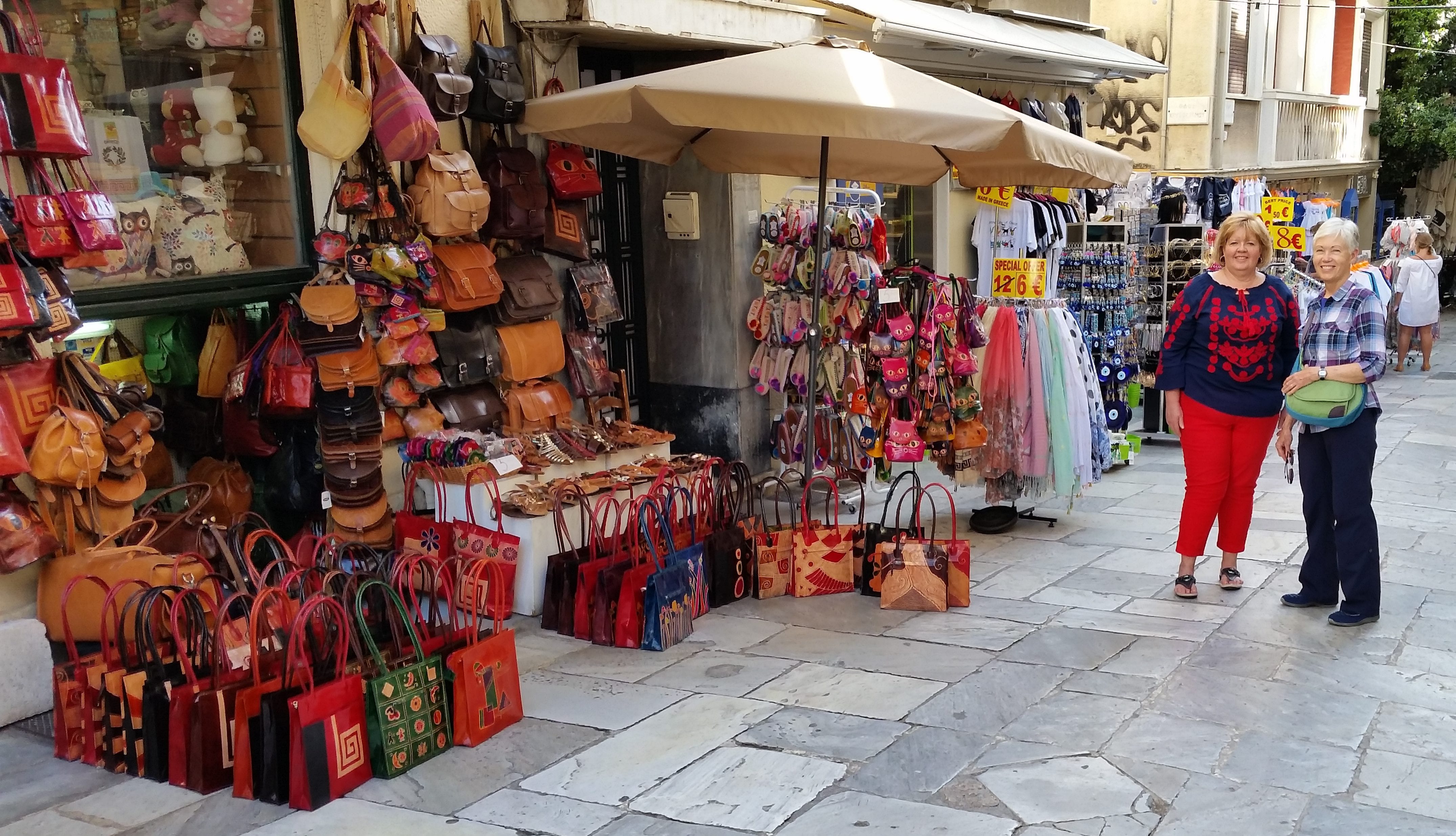 Cathy and Nancy stroll through the shops on the Plaka

It was now about 5:00 p.m. Feeling somewhat refreshed, the four of us headed toward the Plaka, where we meandered among the shops in the vehicle-free streets until we realized that although all of us were in Athens for the first time, we were paying more attention to our conversation than to the scenery. It had been several years since we had seen Cathy and Jeff, so we really needed to catch up. Finally, we just sat down at an outdoor café, ordered drinks, and continued talking about the joys and challenges of having adult children. 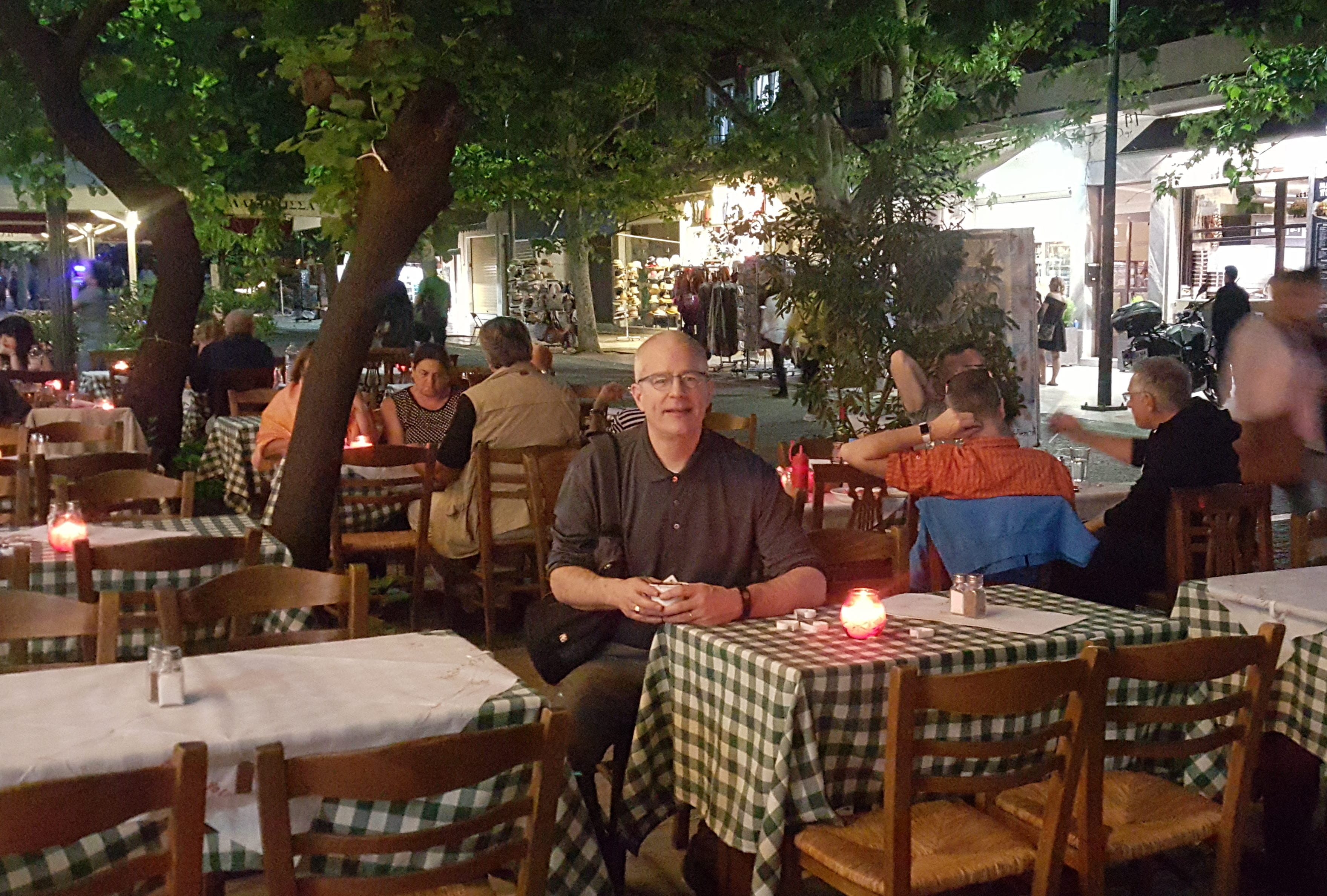 Since it was more than an hour before we were supposed to meet the rest of our group at the base of the Areopagus, and because we weren’t sure whether we would have time later for dinner, we moved to another outdoor restaurant where we could get something more substantial than bar food. Nancy and Michael shared a pork gyro and a salad of lettuce, cucumbers, olives, and tomatoes that actually tasted like tomatoes. (Other than the tomatoes, nothing tasted much different from what one would expect from a Greek restaurant in the States.) Meanwhile, the conversation kept going and going and going.

Nancy in front of Hadrian’s Arch 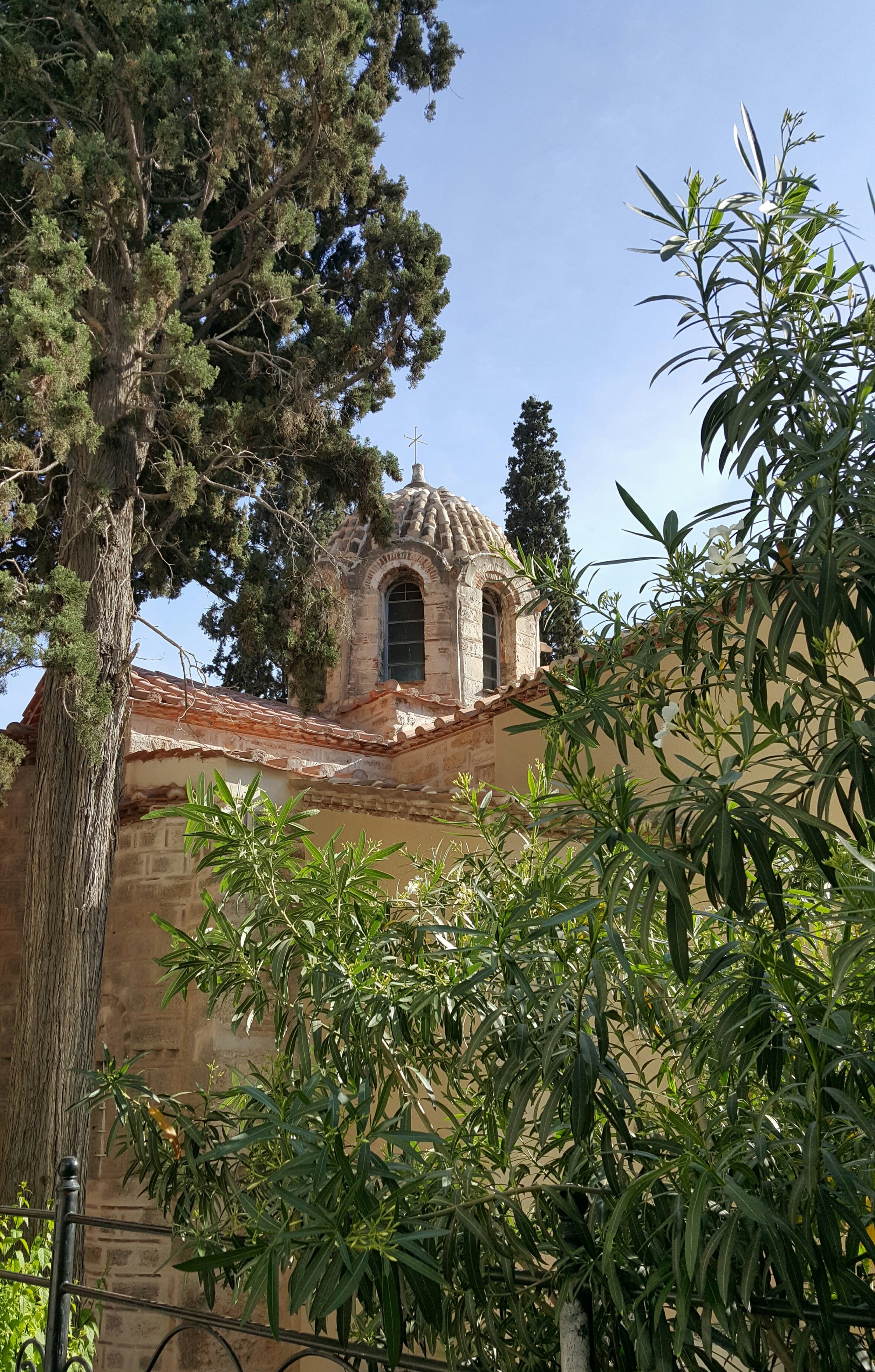 Once dinner had been consumed and paid for we headed for our group’s rendezvous point, arriving several minutes ahead of everyone else. As it turned out, those who had been on later flights had barely reached the hotel by the time we were supposed to meet for our first walking tour, so only a dozen people were ready to follow Jim up the Areopagus (translated from Latin as Mars Hill) as sunset approached. This is where the philosophers of Athens, hungry for new ideas to dispute, took Paul when they heard that he had been teaching some provocative doctrines in the local synagogue. Disturbed that the Athenians were so wary of displeasing anyone in their extensive pantheon that they even had dedicated a monument to “the unknown god,” Paul eagerly identified their mystery deity as Jesus Christ, the Creator and Lord of all nations, the Father of all humankind. 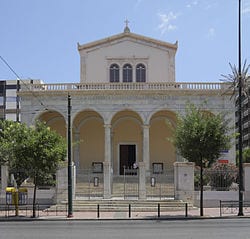 The Roman Catholic Cathedral Basilica of St. Dionysius the Areopagite in central Athens was erected in the nineteenth century to honor Paul’s first Athenian convert.

The Athenian philosophers listened attentively until Paul explained that Jesus, who had lived among the Jews and been crucified by the Romans, had been resurrected, and that his resurrection had opened the door for all people to rise from the dead. At that point, most began to mock his words and turn away. A man named Dionysius, however, along with a woman named Damaris and a few others, believed Paul’s teachings and established the first Christian community in Athens. 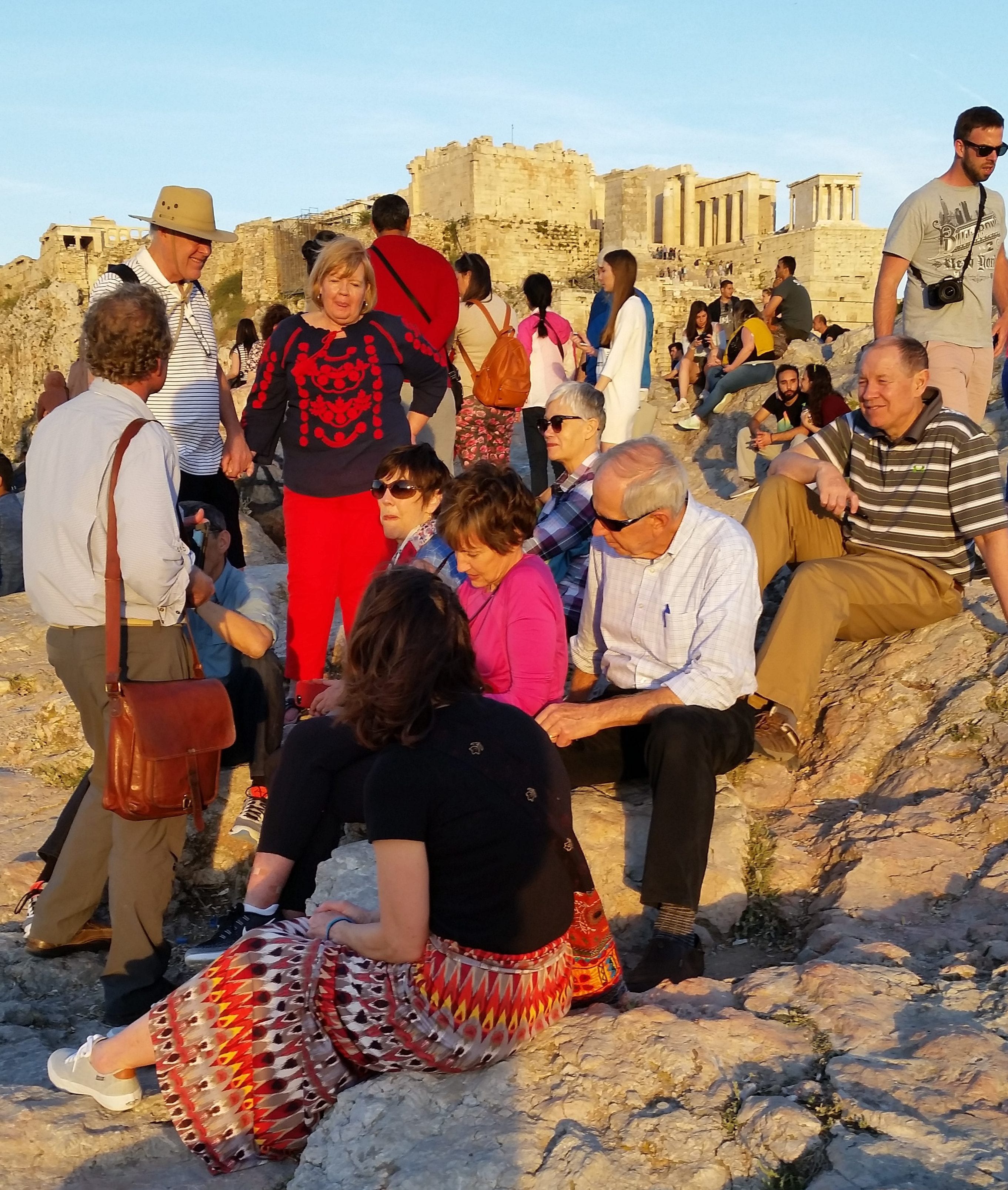 The Areopagus—named for Ares, the god of conflict—stands about a hundred yards from the Acropolis in one direction and two hundred from the Agora (the ancient marketplace) in another. Both of us seem to have pictured the story of Paul’s experience on Mars Hill (Acts 17:16-34) as taking place on a gently sloping rise above the Agora, with the Apostle and his interlocutors resting at the base of some marble columns. In reality, the Areopagus is a craggy mound of granite with a steep, irregular stairway carved into its side. The stone would be rough were it not for the millions of feet that have climbed to the top. After nearly three thousand years, much oft he granite is now as smooth and polished as a kitchen counter. Even if you opt to climb the modern metal stairs instead of the old stone ones, the uneven rock surface at the top of the hill is extremely difficult to navigate without slipping. 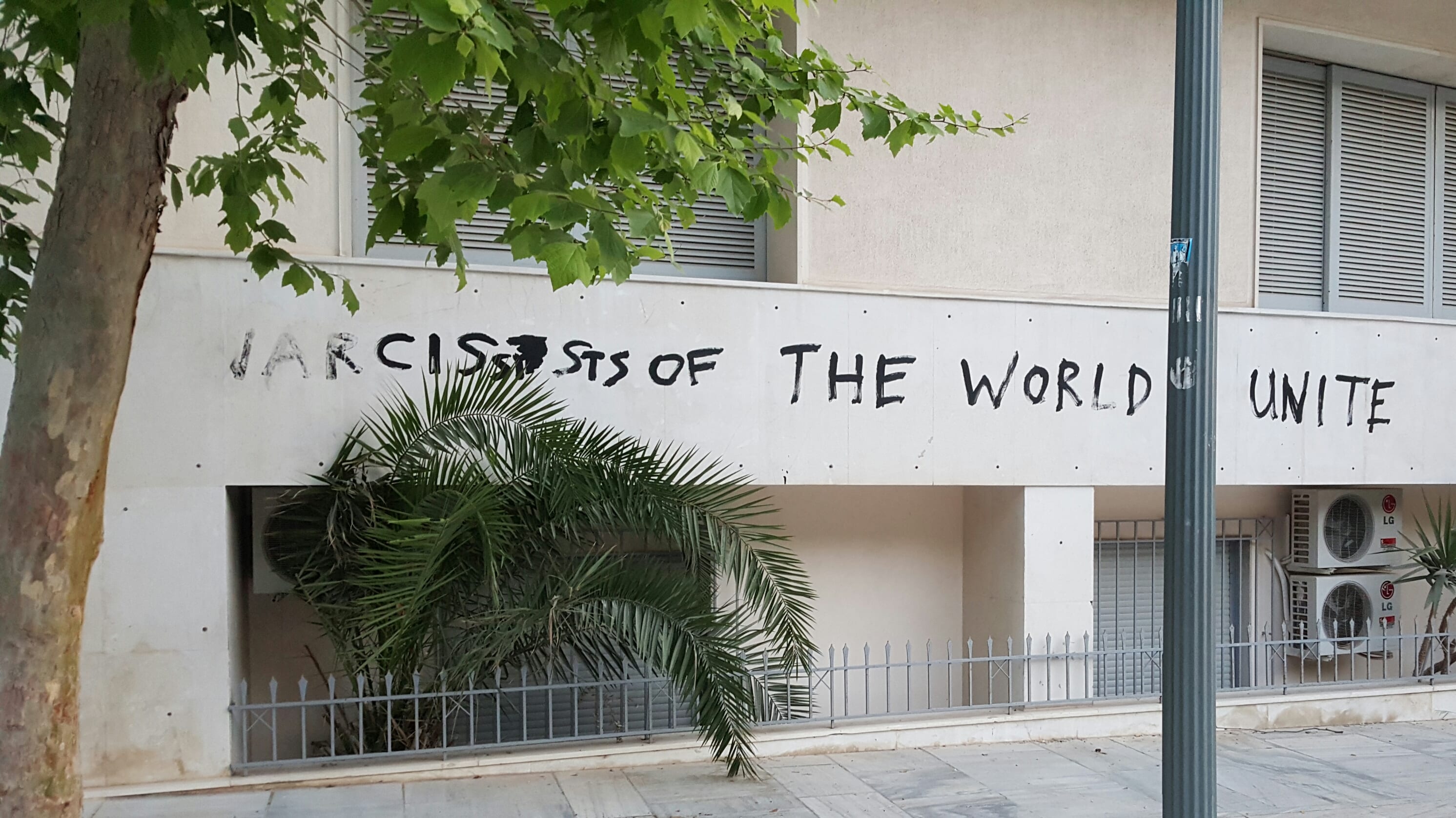 Ironical graffiti from the city of philosophers: “Narcissists of the world unite”

On our way back to the hotel, Cathy and Jeff—who had managed to sleep longer than we had at the hotel this afternoon—decided to see how many ancient artifacts they could examine before the National Museum of the Acropolis closed for the evening. (We had been told it would close at 8:00—only twenty minutes away—but once they went inside, Cathy and Jeff were delighted to learn that the museum stayed open until 10 p.m. on Fridays.) While the rest of the group looked for a good place to have dinner, Nancy and Michael began a search for ice cream, and then, having been successful, headed back to the hotel. We were definitely ready to be horizontal for an extended period of time.