Last fall, our dear friend Nan asked if we would be interested in joining her and Keith, as well as our mutual friends Linda and Budge, on the “Travels of Paul” tour offered by Discovery Expeditions and Adventures (the company who led our 2015 trip to Jordan and Israel) in May 2017. Our immediate reaction was to say no, because we had tentatively planned to go to Alaska with Nancy’s sister and brother-in-law sometime in 2017, but the idea of an Aegean cruise suddenly sounded tempting–especially after we saw Discovery XA’s promotional photo of the Wind Star with its sails silhouetted against a golden sunset. The temptation became nearly irresistible when we heard that Mark and Lynn, and then Richard and Judith—our companions from Cincinnati on the Jordan-Israel trip—also had signed up for the Travels of Paul. 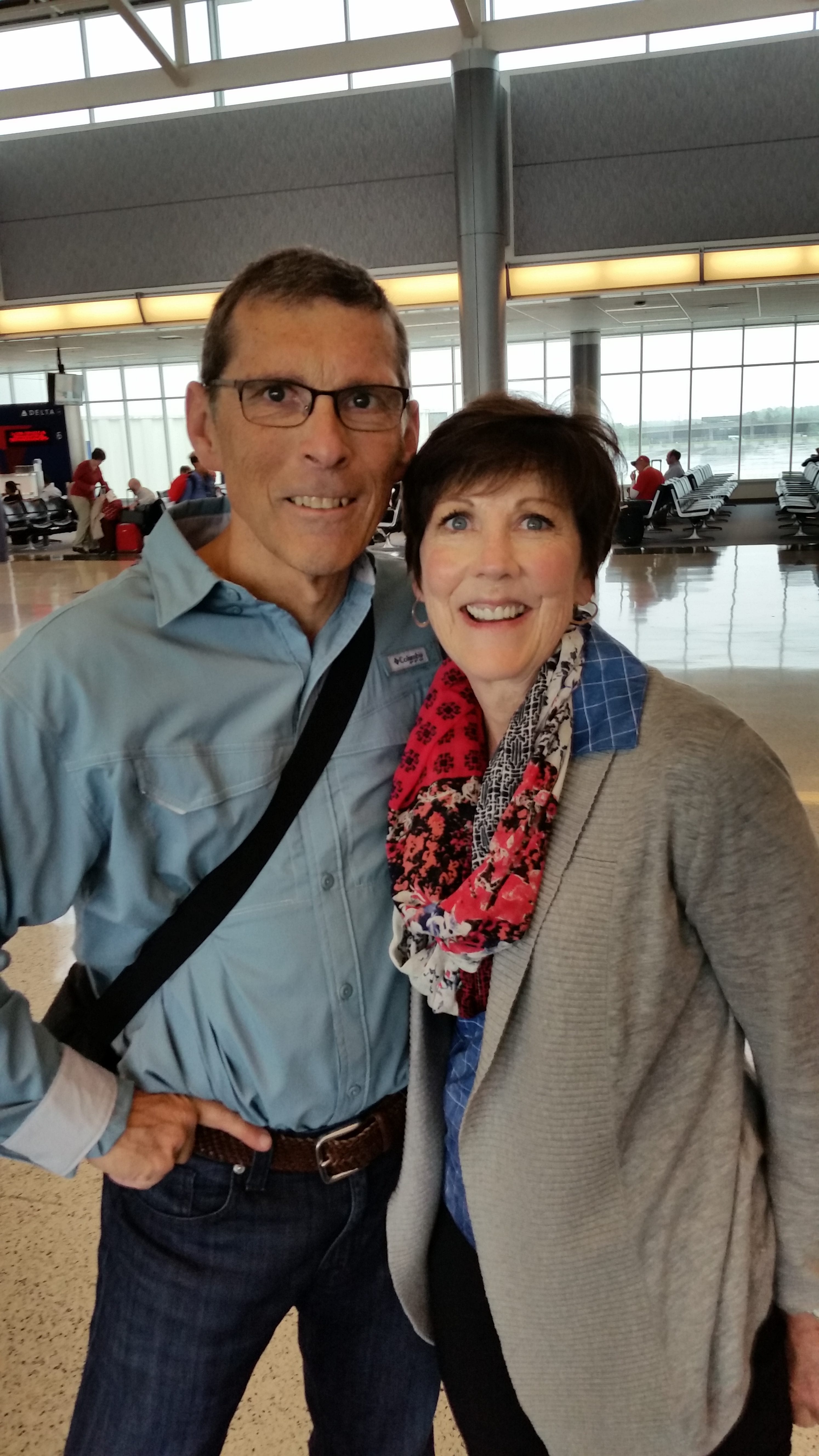 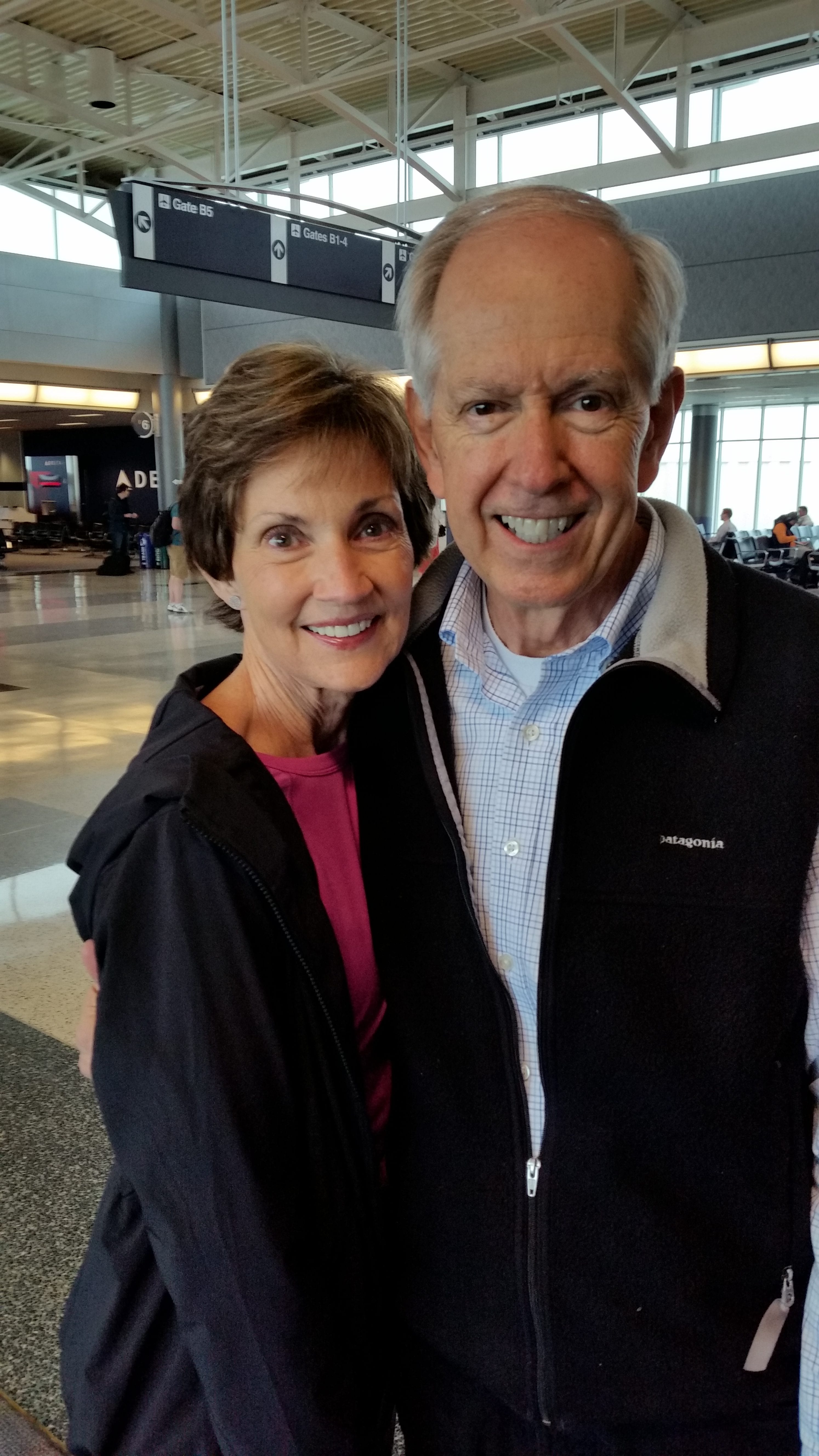 Because our plans for an Alaska excursion with Nancy’s sister and brother-in-law were still inchoate, we asked them if they would be interested in going to the Aegean instead of the Arctic. Connie and Ron considered the idea but decided that before trying to retrace the journeys of Paul they ought to visit the Holy Land, where Jesus himself had walked. But they encouraged us to go with our friends, suggesting that they might get their own group together to go to Israel, and that the four of us could wait to see Alaska another year. Once we determined that Connie and Ron would not be disappointed if we postponed a trip with them, we, too, put down our deposit for the Travels of Paul. 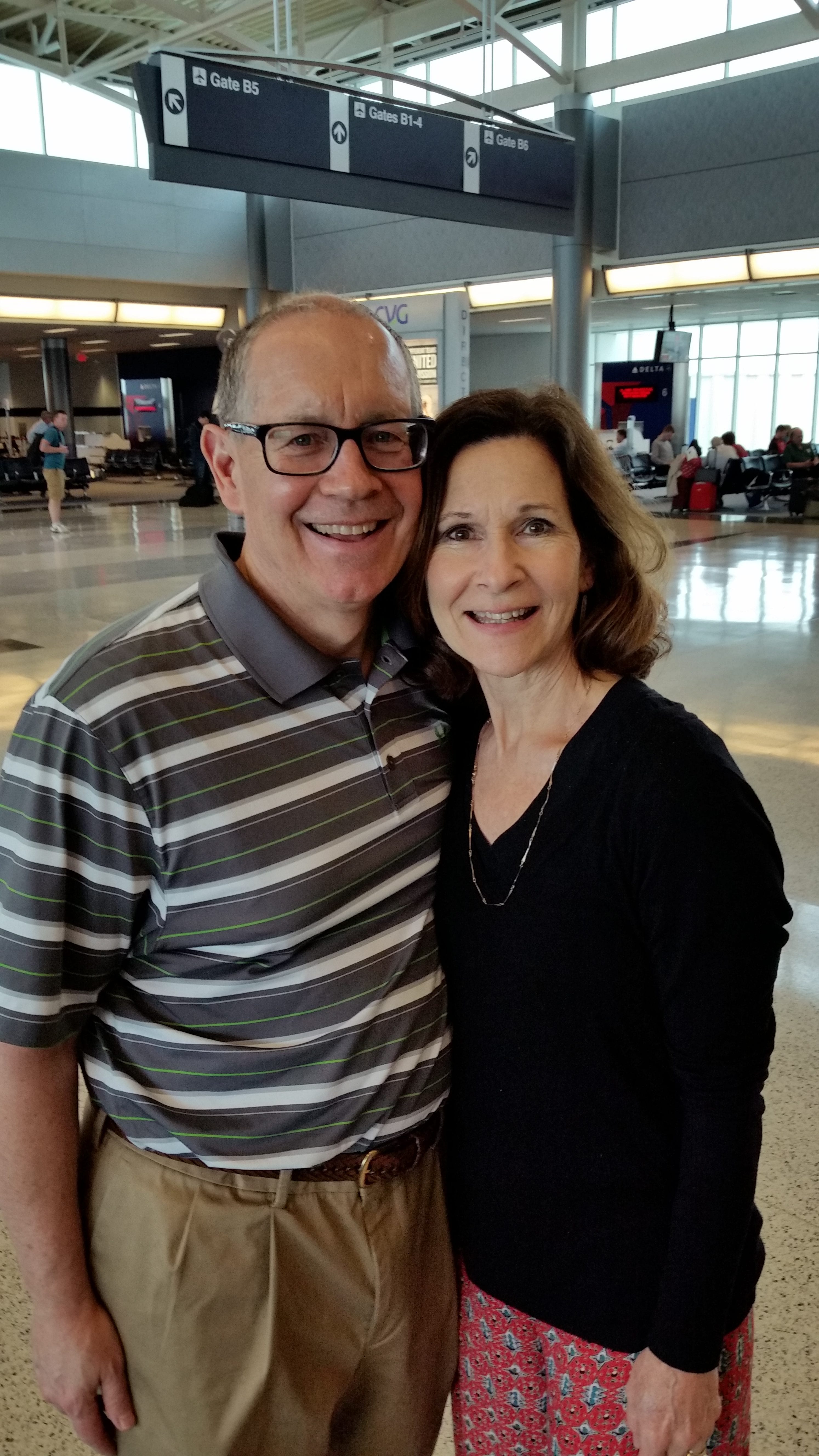 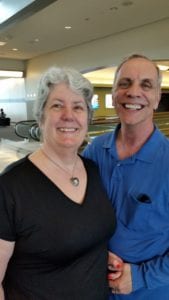 At this point, five couples from our church congregation’s empty-nesters group had committed to the Aegean excursion—but the Harwards would not be the last to sign up.

For years, Nancy and Michael had been trying to arrange a trip with another pair of friends. Cathy and Jeff had moved into an apartment around the corner from the basement we called home back in the late 1970s, when all of us were newly-married students at Brigham Young University. Although both couples soon left Provo, Utah, for different graduate programs, we reconnected several years later when both families—now with children in tow—moved to the east coast, and we enjoyed visiting each other often. Eventually, career demands again pulled us to different parts of the country and our shared vacations became less frequent. Now, however, the time had come to go somewhere together again. So we called Cathy and Jeff (who currently live in Mesa, Arizona), explained what we were planning, and invited them to join us on the Travels of Paul. A few weeks later, we were thrilled to hear that they, too, had sent a deposit to Discovery XA. 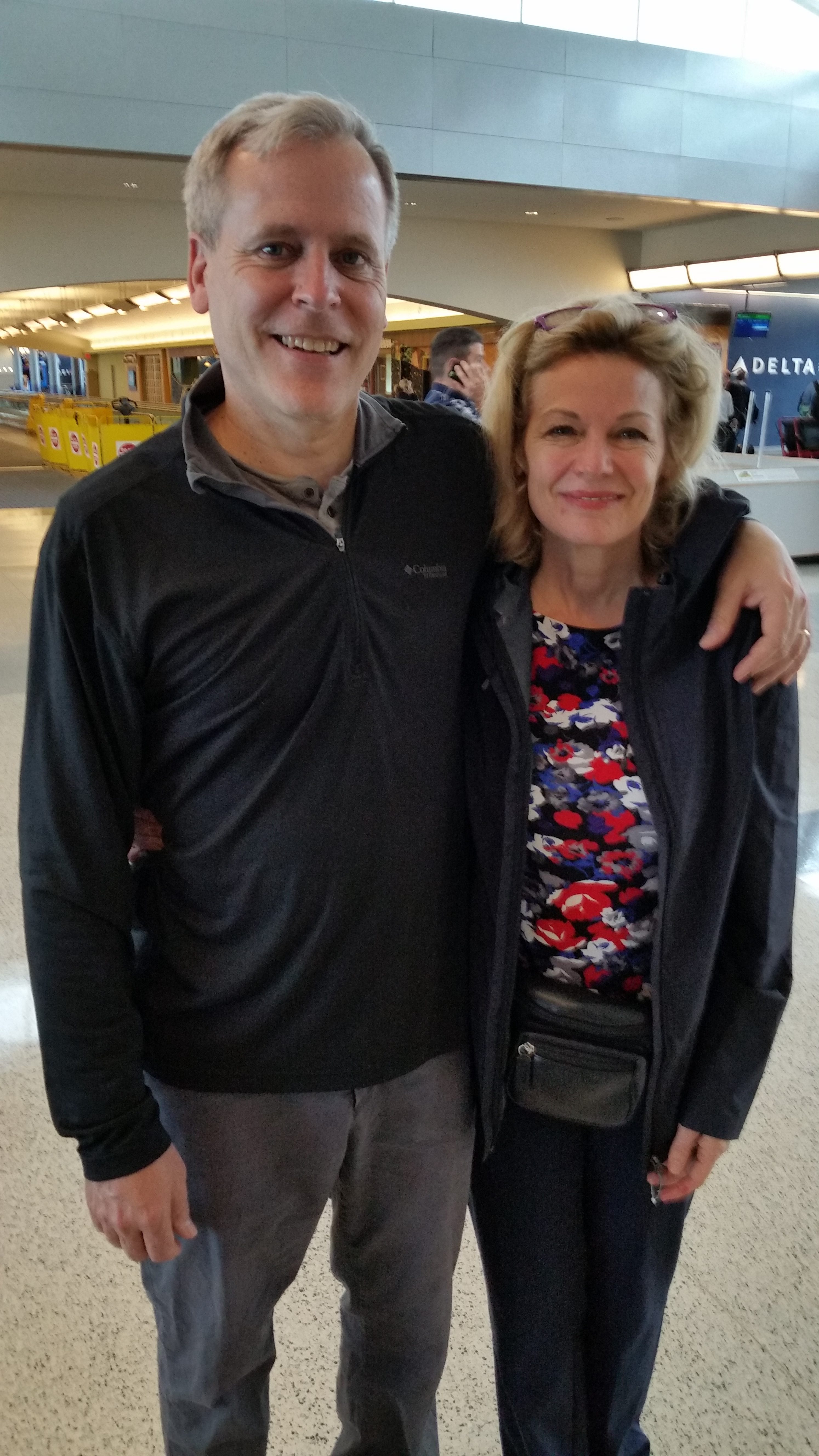 In the meantime, another couple from our Cincinnati empty-nesters group, Dyrk and Jody, heard that ten of us were planning a trip and cried, “Can we come, too?” The registration deadline had already passed and all the spaces had been filled by this time, but we encouraged Jody and Dyrk to contact Discovery XA anyway just in case any spots had opened up. To their surprise and our delight, there had been some cancellations, so they were in. 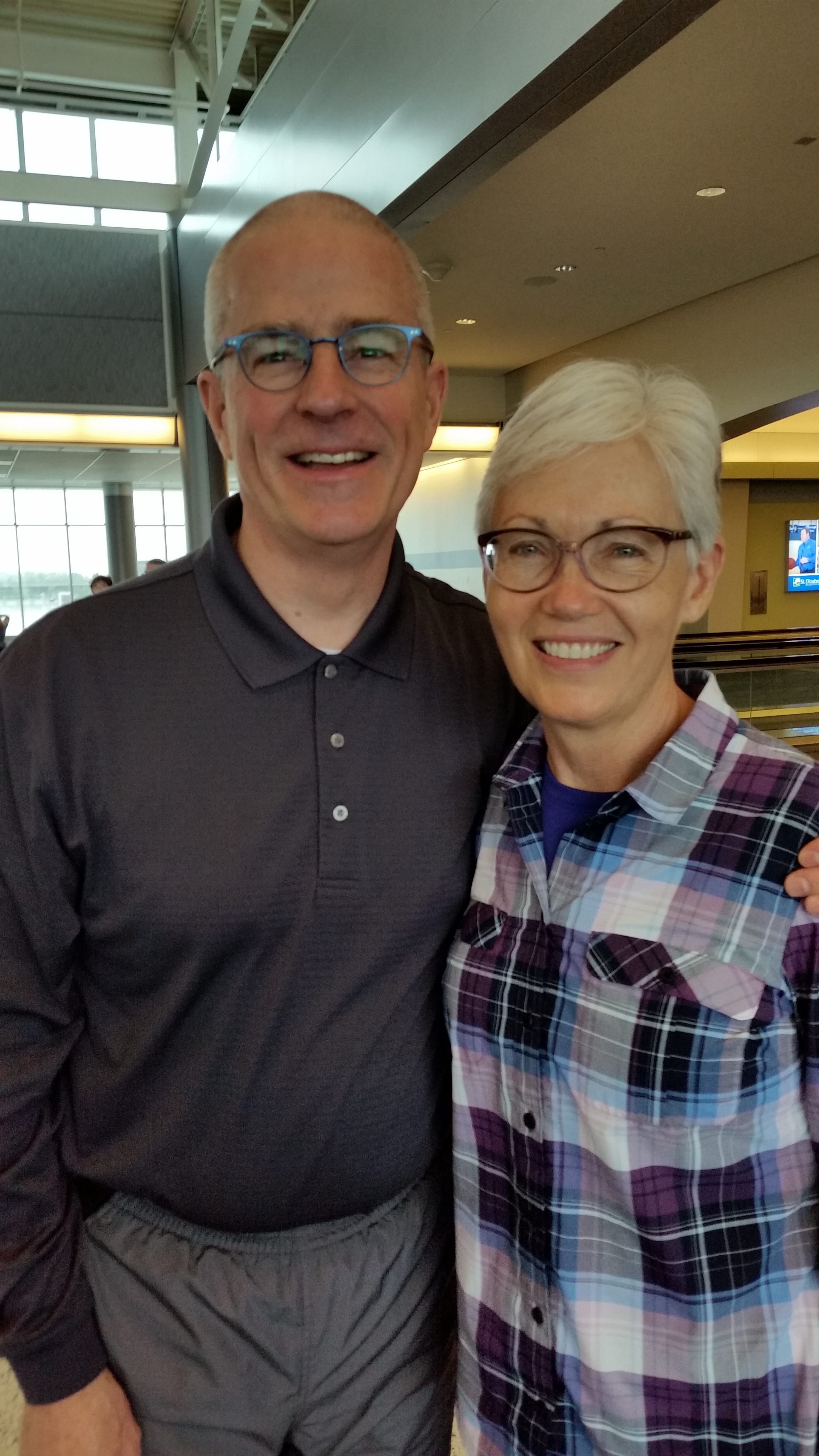 Now six couples from our Cincinnati church congregation, plus our friends from Arizona, were booked for the Travels of Paul expedition. Those of us who had traveled together before were particularly excited because we knew how much more meaningful our experiences would be when we could share them with friends.

Jim and Carol Gee, the masterminds behind Discovery Expeditions and Adventures, will also accompany us on this trip. Most of us have traveled with them before—Jim led our group when we went to Jordan and Israel in 2015—so we count them as friends, too. And a few days ago, we learned that Amanda P, the energetic septuagenarian from our Holy Land tour, also will be part of our Travels of Paul group. This time, she will be accompanied by two of her daughters and a son-in-law. We look forward to meeting them and the other four people we haven’t met yet. (We will be twenty-four in all—the perfect size for a tour group.) 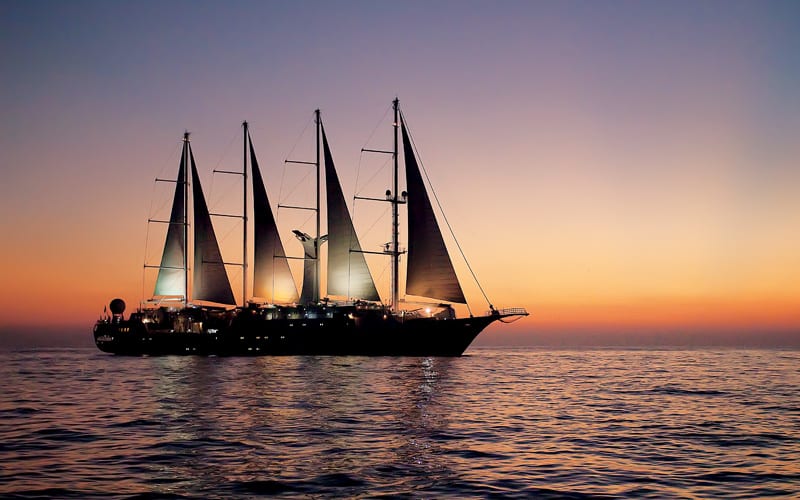 The centerpiece of our Travels of Paul excursion is a cruise of the southern Aegean aboard the Wind Star, a 148-passenger sailing ship. We will visit several of the places in which the Apostle Paul preached the Good News of Jesus Christ—Athens, Corinth, Ephesus, and Rome—as well as Patmos, the island where John the Evangelist received his extraordinary Revelations. In between, we will stop at some other Greek islands to enjoy the scenery and local culture.

With departure day approaching, phone calls, text messages, and emails sped back and forth between members of our group as we sought each other’s advice about what to take, where to exchange currency, how to avoid seasickness, expectations for Internet access and electrical current, and the Wind Star’s dress code. (The Windstar Cruises website advised us to think “casual, yet elegant. Imaginative, yet relaxed. Stylish, yet comfortable.” Whatever all that means.) 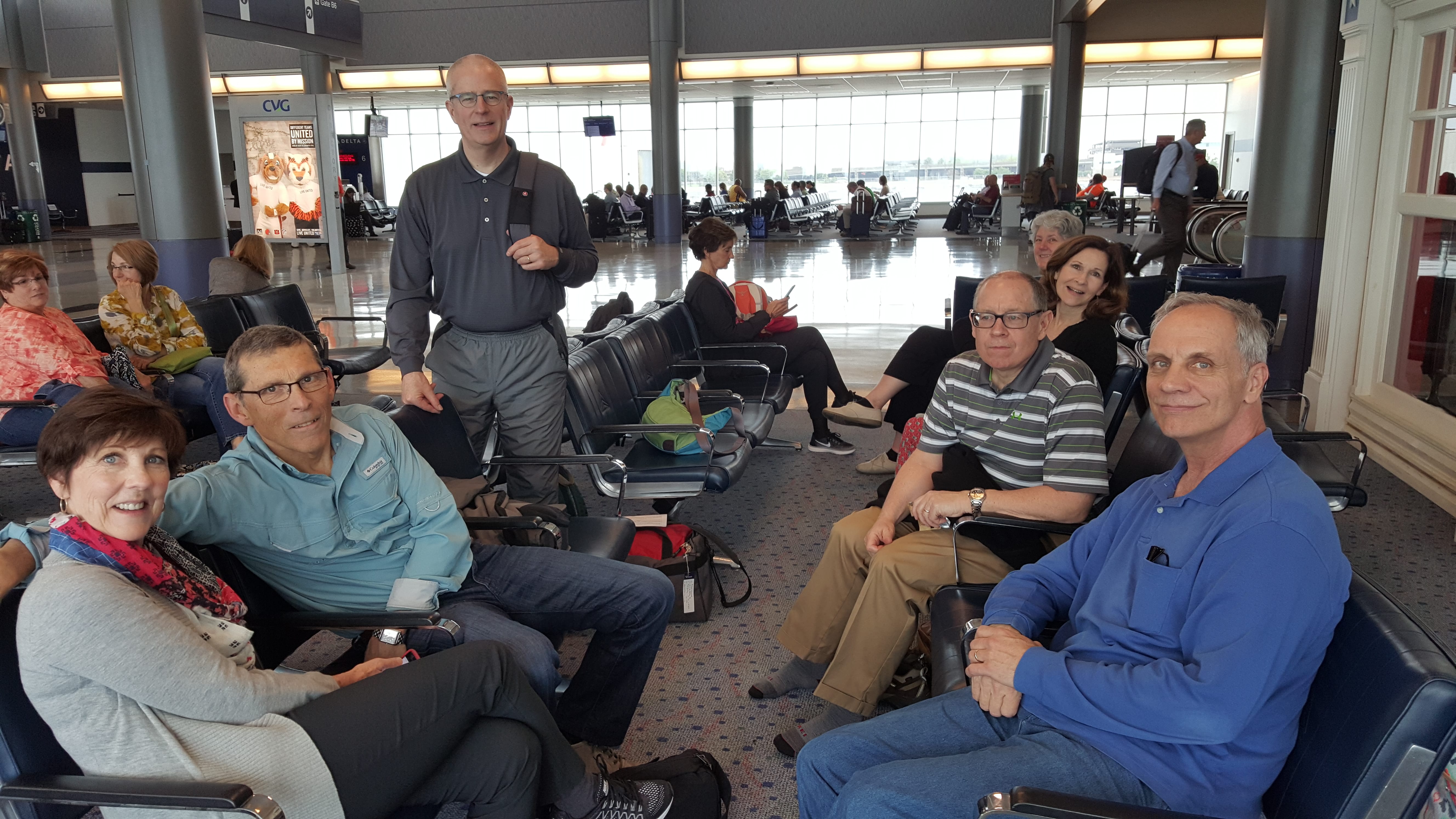 Waiting to board our plane to Paris

The big day has arrived at last. This afternoon, the piles of clothing and other paraphernalia that had been accumulating in our spare bedroom were transferred to our suitcases and backpacks, and as soon as Budge and Linda (who live around the corner from us) pulled into our driveway to pick us up, we were off. The other Cincinnati-based travelers met us at the CVG airport for our flight to Athens, which was scheduled to leave about 5:30 p.m. Most of us are flying via Paris; since they had booked later than the rest of us, Jody and Dyrk are flying through Amsterdam. Those of us on the eight-hour Paris flight hunkered down after dinner, trying to get as much sleep as we could. For those of us who are sleep-challenged (including both Nancy and Michael), it was a wasted effort. Nancy finished a couple of crosswords while Michael read, and then after dinner we watched Fences. Terrific performances by Viola Davis and Denzel Washington. Definitely not a wasted effort.