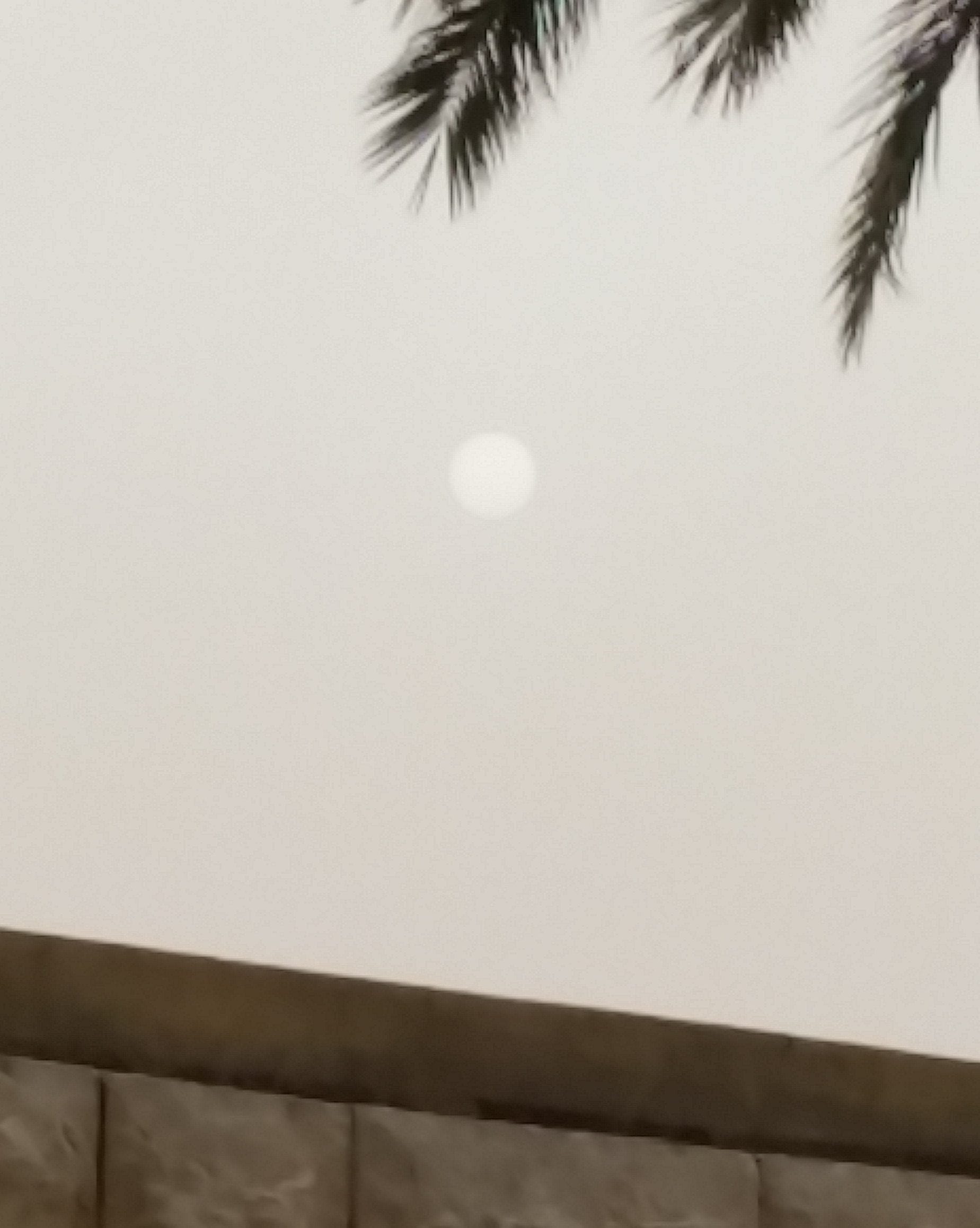 Sun obscured by the wind storms

It probably has become apparent that this tour has not left us much downtime. Even last night’s dip in the hotel pool was circumscribed by our late afternoon arrival and a firm dinner time. Call time most mornings has been around 8:00 a.m., and we are expected to be on the bus, with our luggage already loaded, ready to go, at the appointed time. This morning was no exception. Nancy was in such a hurry that she forgot to take off her glasses and put her contact lenses in after breakfast, as is her habit. It turned out to be a fortuitous omission: the wind was so strong today that she probably would have had to keep her eyes closed half the time to avoid getting dust under her lenses.

The scenery passing by the windows of our bus gradually changed as we left Jericho and traveled up the Jordan River Valley toward Bet She’an. Groves of neatly spaced date palms gave way to fields of cucumbers, tomatoes, and peppers. Most of the fields were completely enclosed with filmy white fabric (or maybe it was plastic; it was hard to tell from a moving bus). When we asked why everything was covered, Samir explained that the enclosures help to keep insects out and moisture in. Moisture retention wasn’t so much of a problem today, because there had been heavy rain for a while overnight.

Our first destination, Bet She’an, lies at a crossroads where the Jordan River Valley meets the Jezreel Valley, a large fertile plain south of Galilee. The hilltop location has been strategically significant for millenia, because whoever controlled it essentially controled commerce between the two valleys and the Mediterranean coast; so again, layers and layers of ancient civilizations are preserved in the national park. 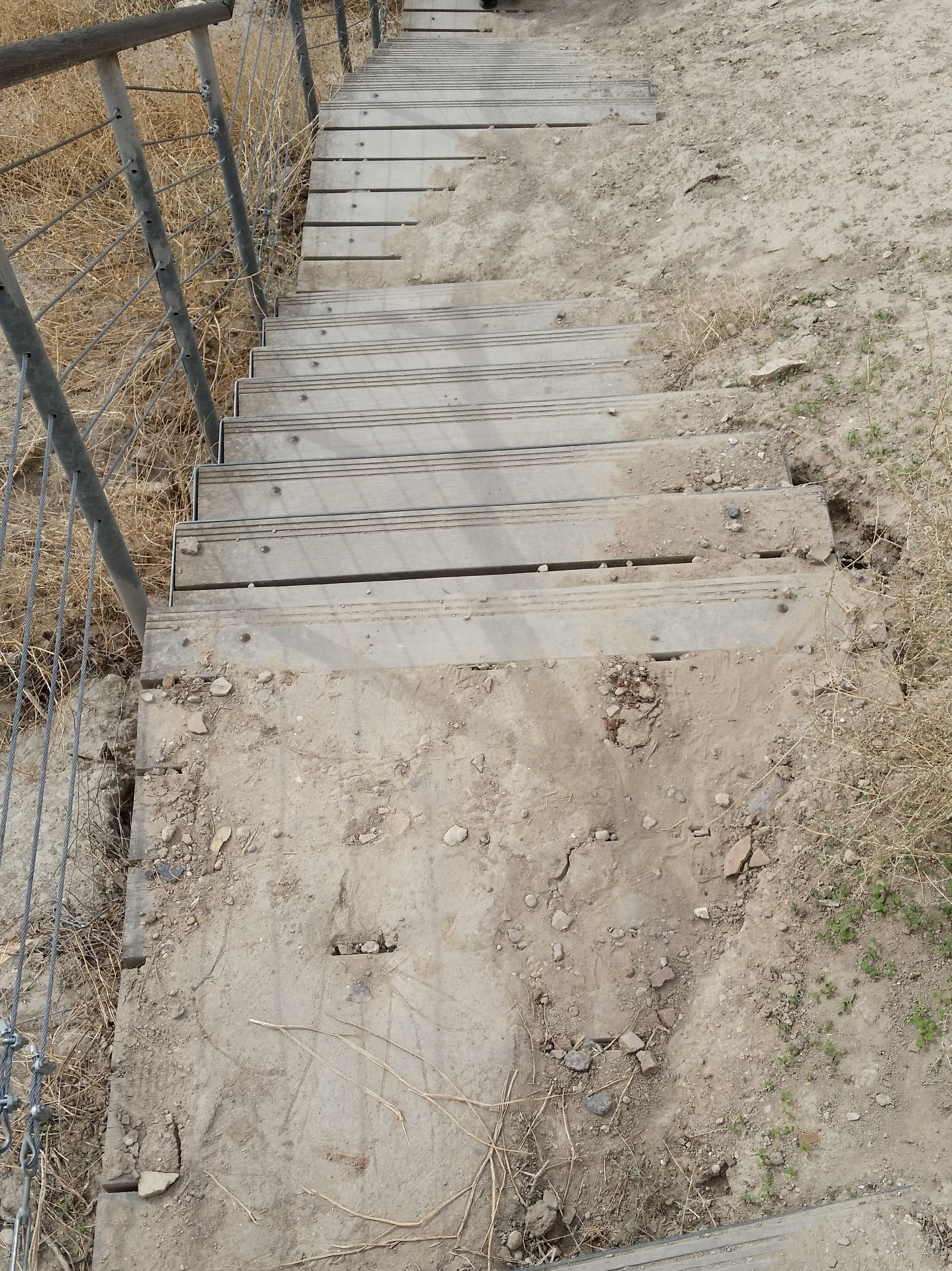 A recent mudslide damaged the stairs up to the tel

The earliest artifacts that archaeologists found when they began excavating the tel (mound) at Bet She’an in the 1920s are from the Early Bronze Age (around 3000 BC), although evidence suggests that the site probably had been occupied by humans intermittently for two or three thousand years before that. By 1500 BC, the village on the hilltop had been taken over by the Egyptians, who turned it into their regional administration center. 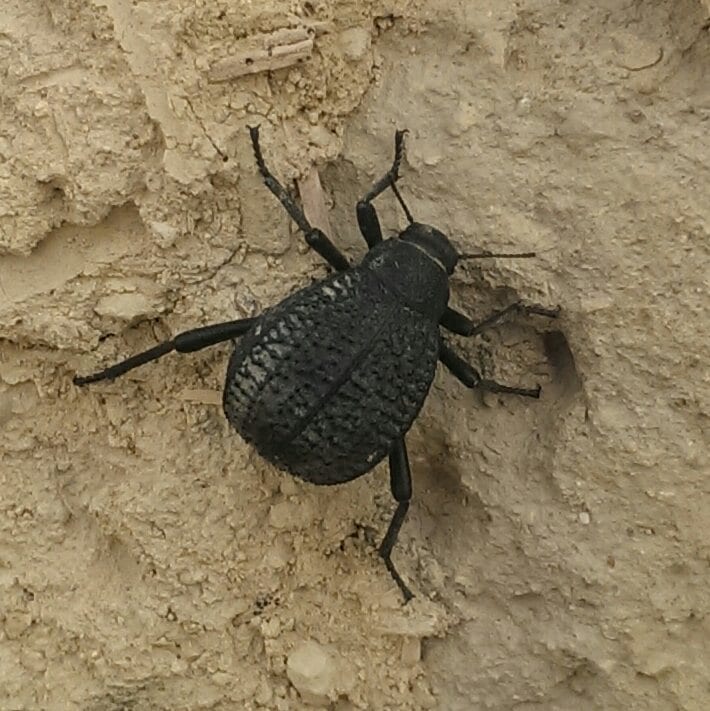 The wind was especially fierce on the top of the tel, which we climbed to examine the more ancient ruins of Bet She’an’s Old Testament period. This is where the bodies of King Saul and his sons would have been displayed on the city walls after the Philistines defeated the Israelite army in 1004 BC. 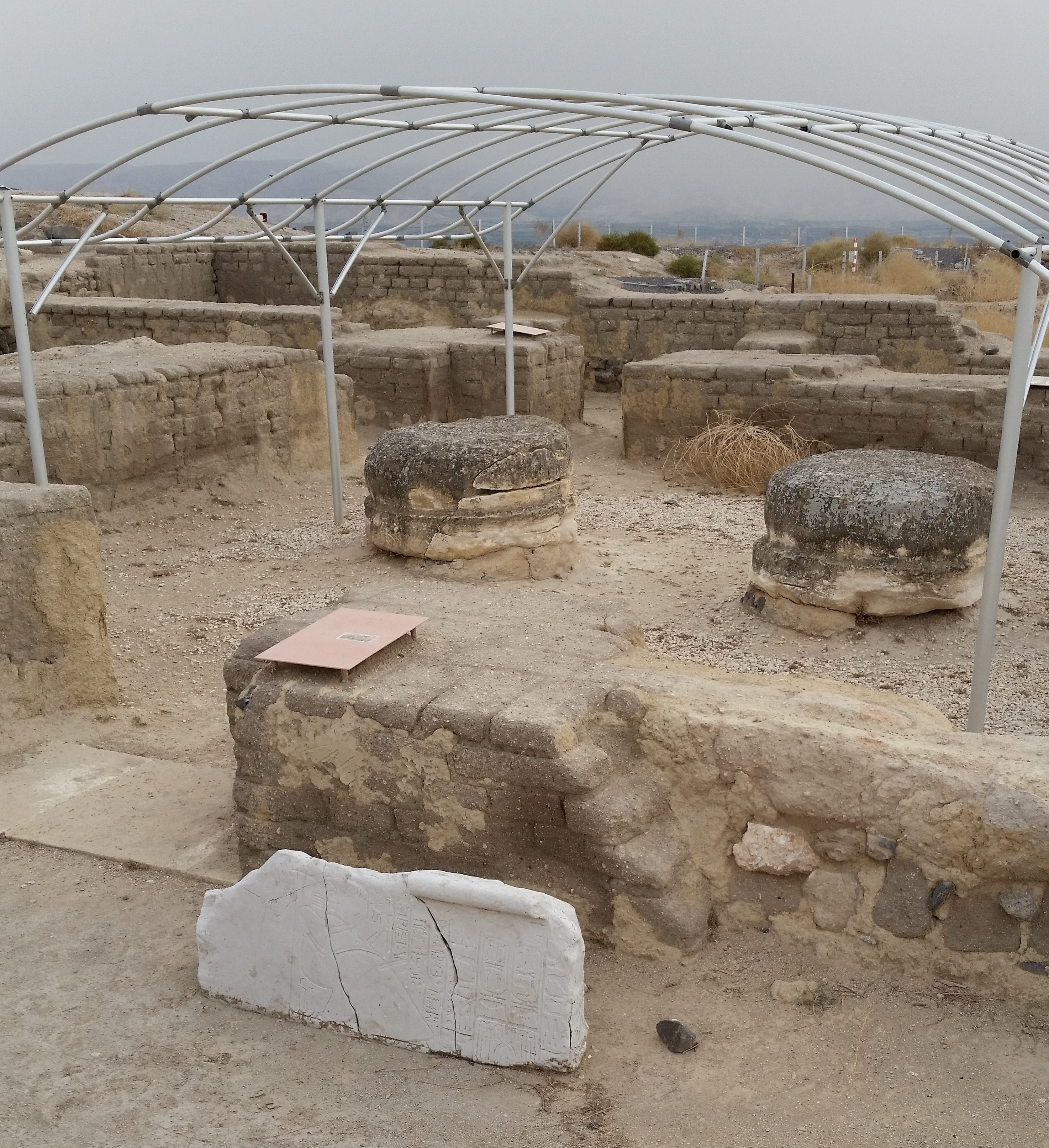 We also saw remains of the Egyptian governor’s residence from an even earlier period. The oddest feature on this hilltop is a scraggily fake tree, a leftover from the filming of Jesus Christ Superstar here in 1973. 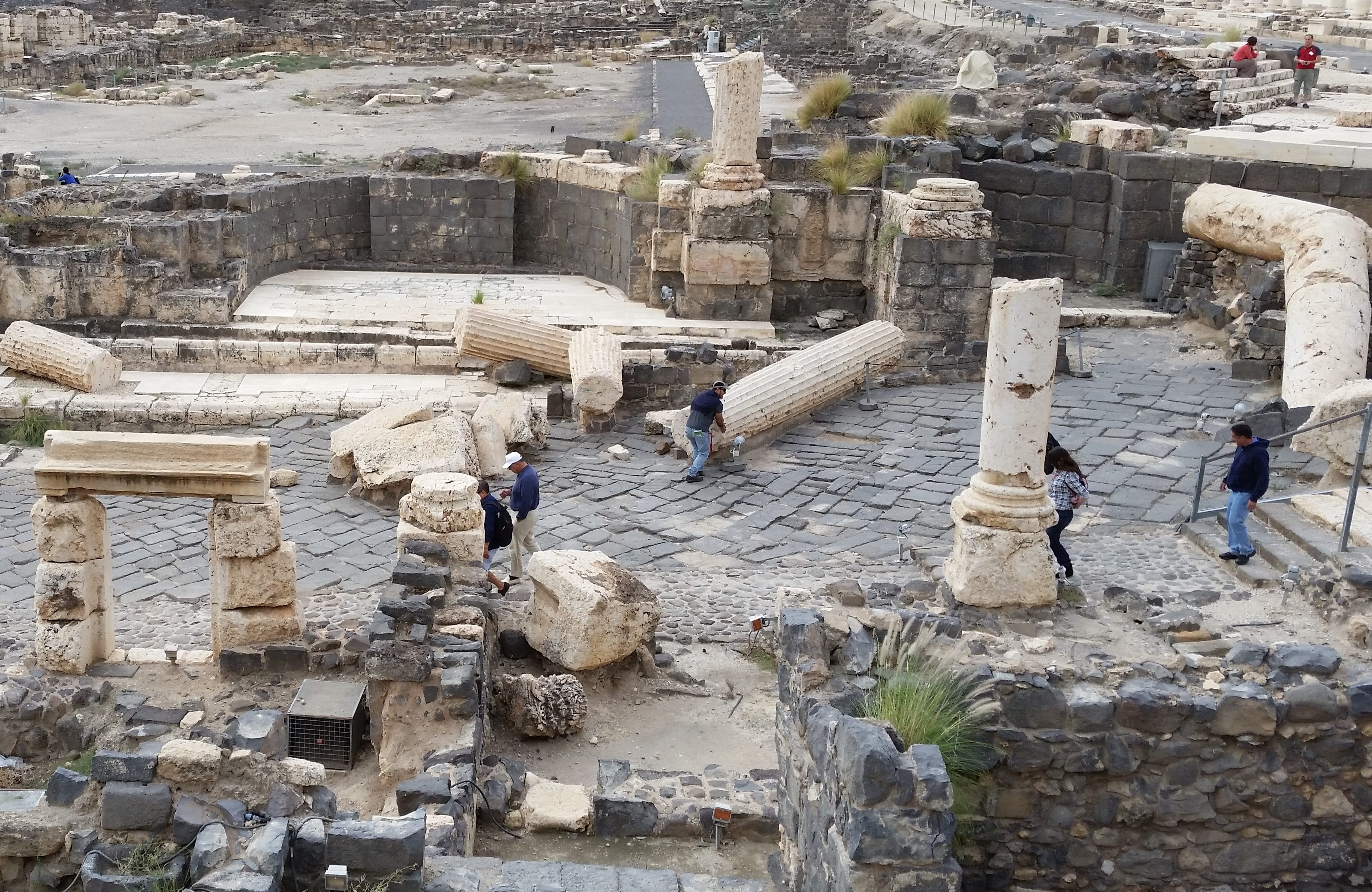 About three hundred years later, the Egyptians began to lose control of their holdings in the Levant with the invasion of the “Sea Peoples” (whose origin is unknown), and completely abandoned Bet She’an after the city was destroyed by fire in 1150 BC. 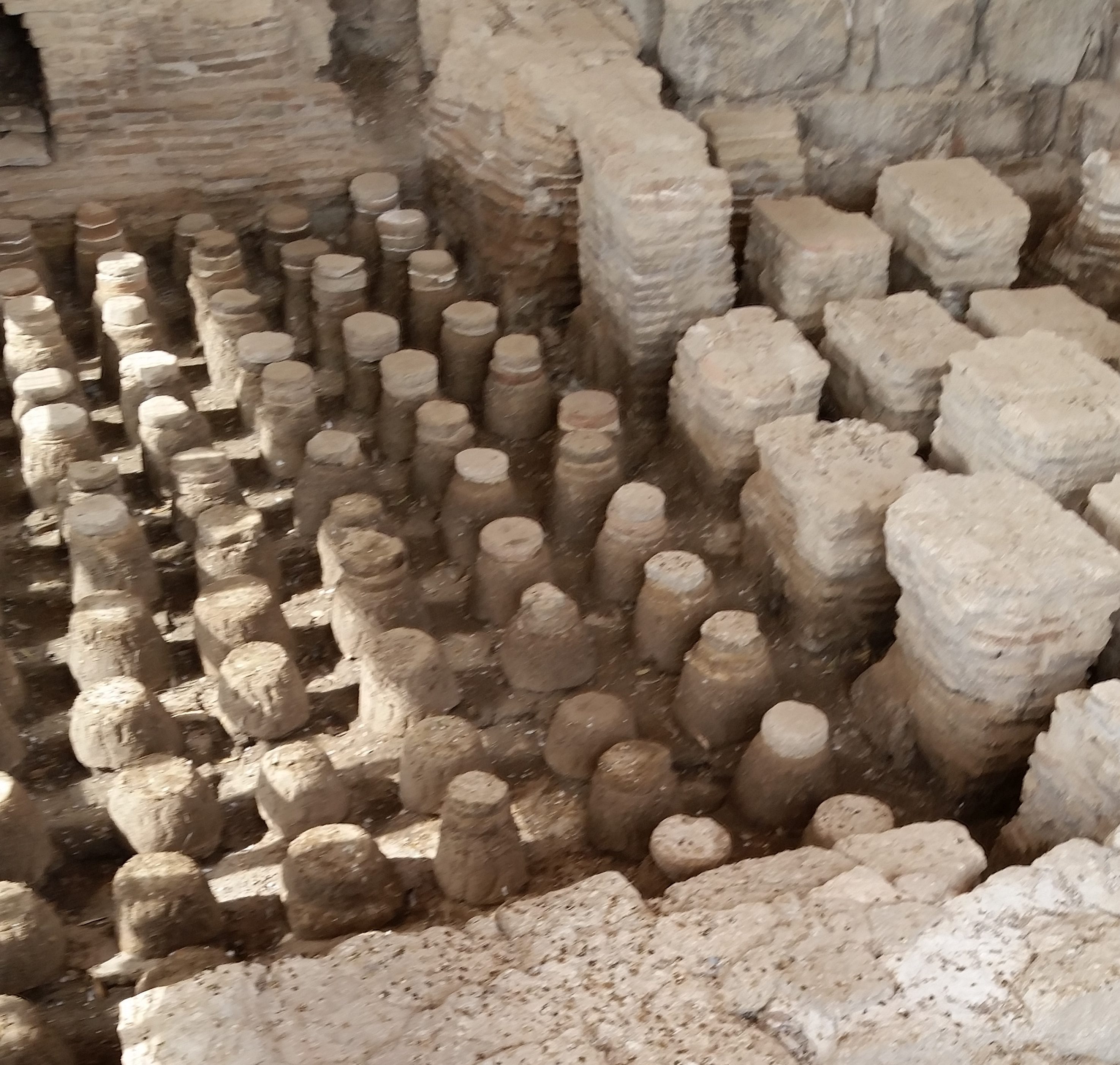 Steam room, with the same type of suspended floor as Masada’s

The local Canaanite population rebuilt the city but held it for only fifty years or so before it was conquered by the Philistines. David, the great Israelite king, took the city from the Philistines in the early tenth century BC, and it remained in Jewish hands until it was captured and burned by the Assyrians in 732 BC. 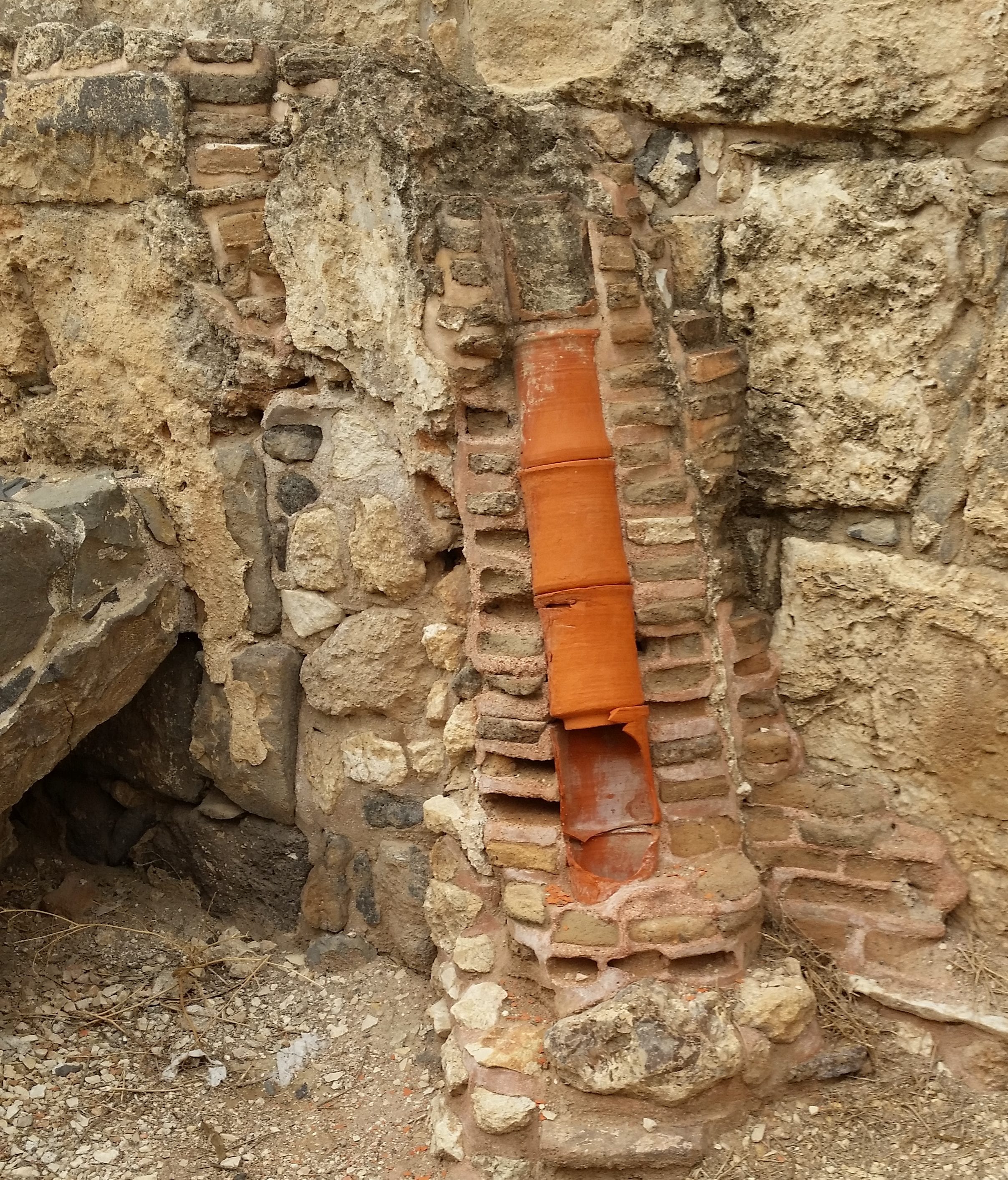 When the Greeks rebuilt the city in the third century BC, they named it Scythopolis. Its residents played a part in the Maccabeean revolt against the Seleucids, and the city was again destroyed at the end of the second century BC. The Romans rebuilt it in 63 BC, but moved the center of town away from the top of the tel and onto its slopes. Scythopolis flourished, eventually becoming the de facto capital of the Decapolis, a loose confederation of ten Greco-Roman cities in the Levant. (The Decapolis also included Philadelphia–present-day Amman.) At its height, Scythopolis had a population of about thirty thousand. 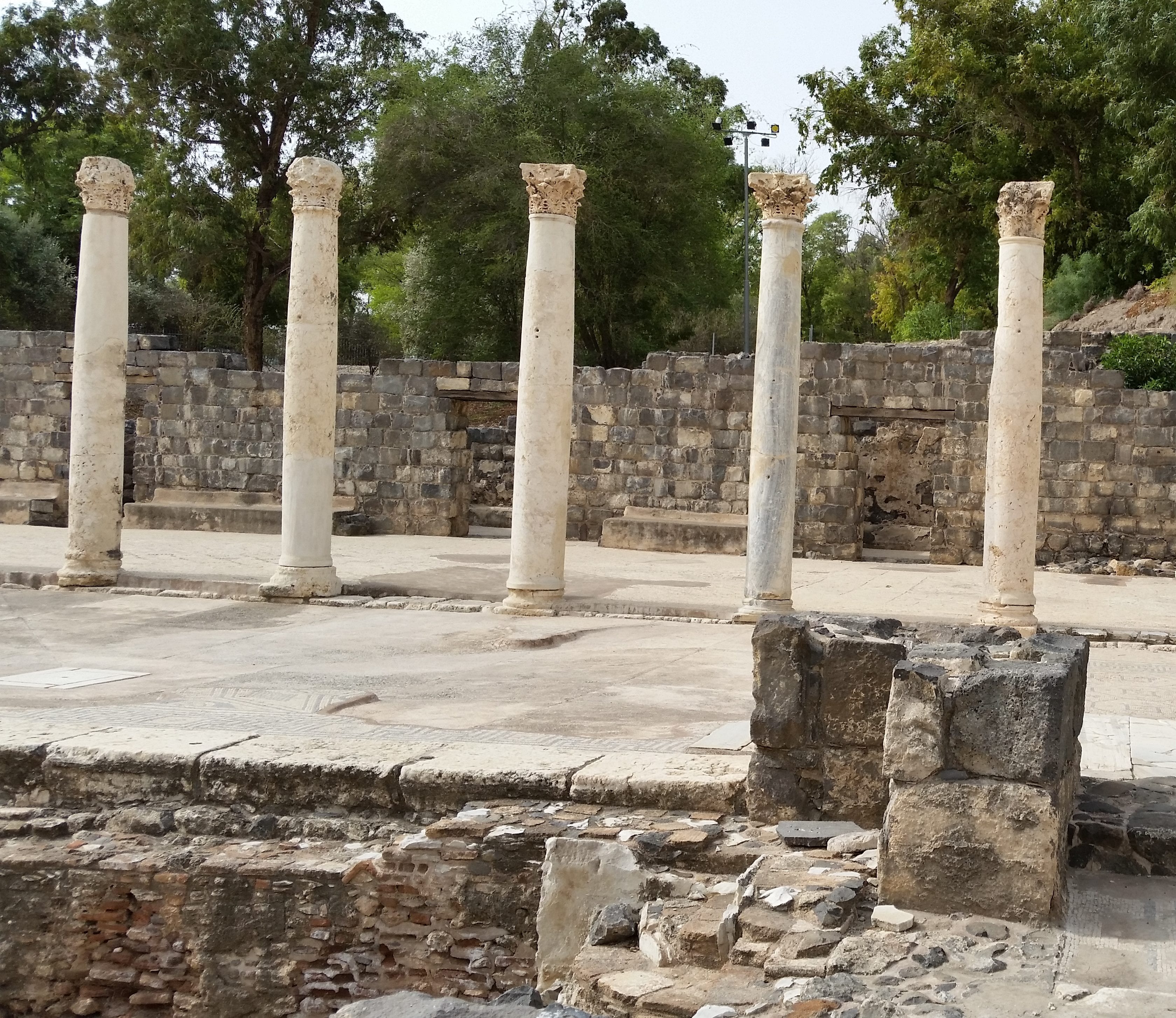 We could continue with Bet She’an’s history of political conquest, destruction, and reconstruction, but this much should suffice because most of the ruins we visited this morning date from the Greco-Roman/New Testament period. Trying to tread very lightly on original first-century mosaics, we walked around the bathhouse. It is much like the one we had seen in Masada yesterday except that because this facility was public, there is a wall inscription listing the prices for a shave, a haircut, and a pedicure. Most written inscriptions here are in Greek, the language used for commercial transactions in cosmopolitan centers of the time. 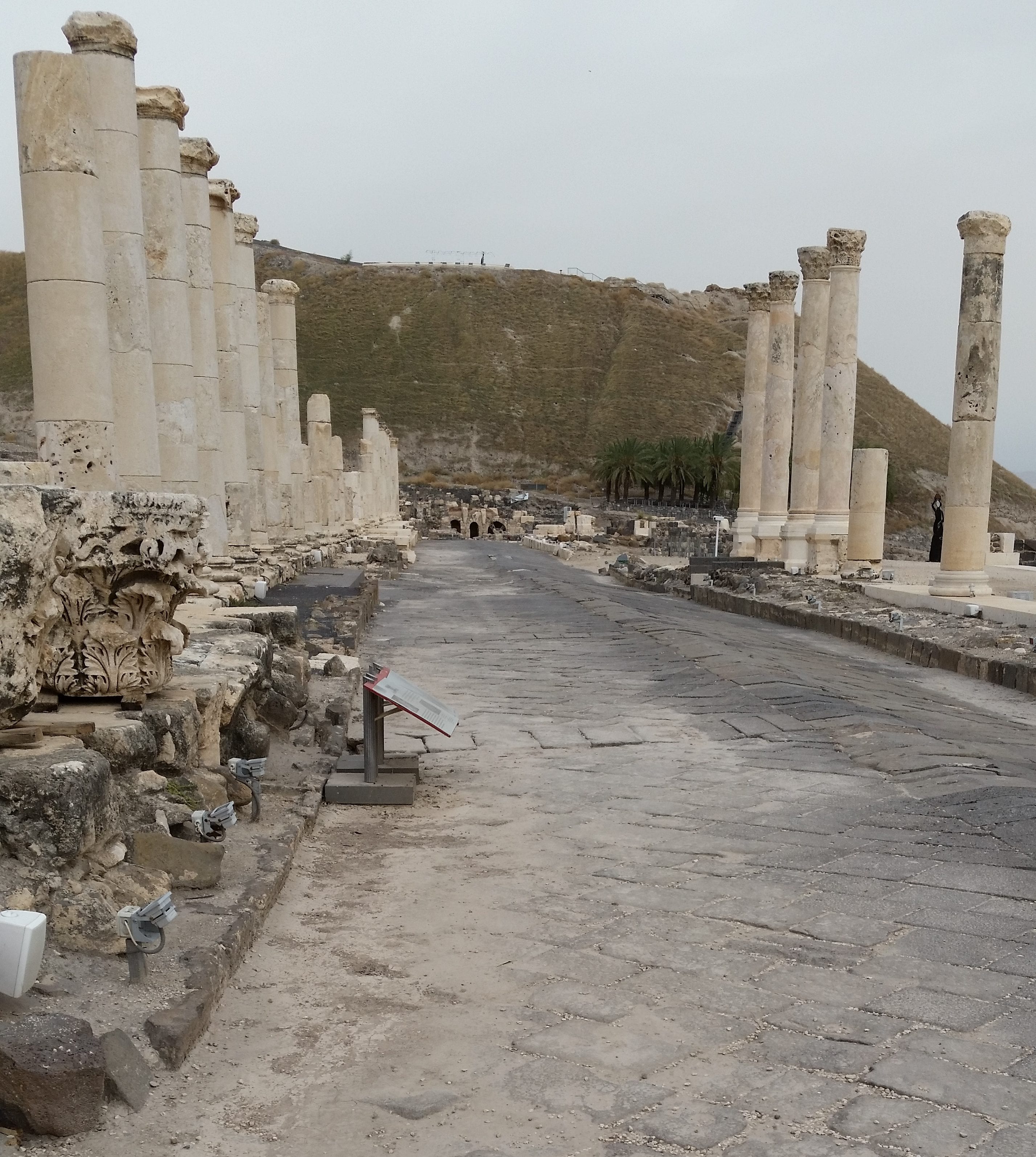 Along the Cardo Maximus, the city’s main artery, most of the original mosaic pavement has been covered over with plain marble slabs. We thought maybe this was a modern protective measure, but then we learned that the slabs had been put down anciently, after mosaics went out of fashion. They must be back in style today, however, because some of Bet She’an’s nicest mosaics have been stolen in recent years. Security at historic sites in the Middle East tends to be lax, and Jim told us that mosaics are surprisingly easy to remove with a big sheet of adhesive plastic. Nevertheless, many of the shops that line the Cardo still have beautiful mosaic floors. 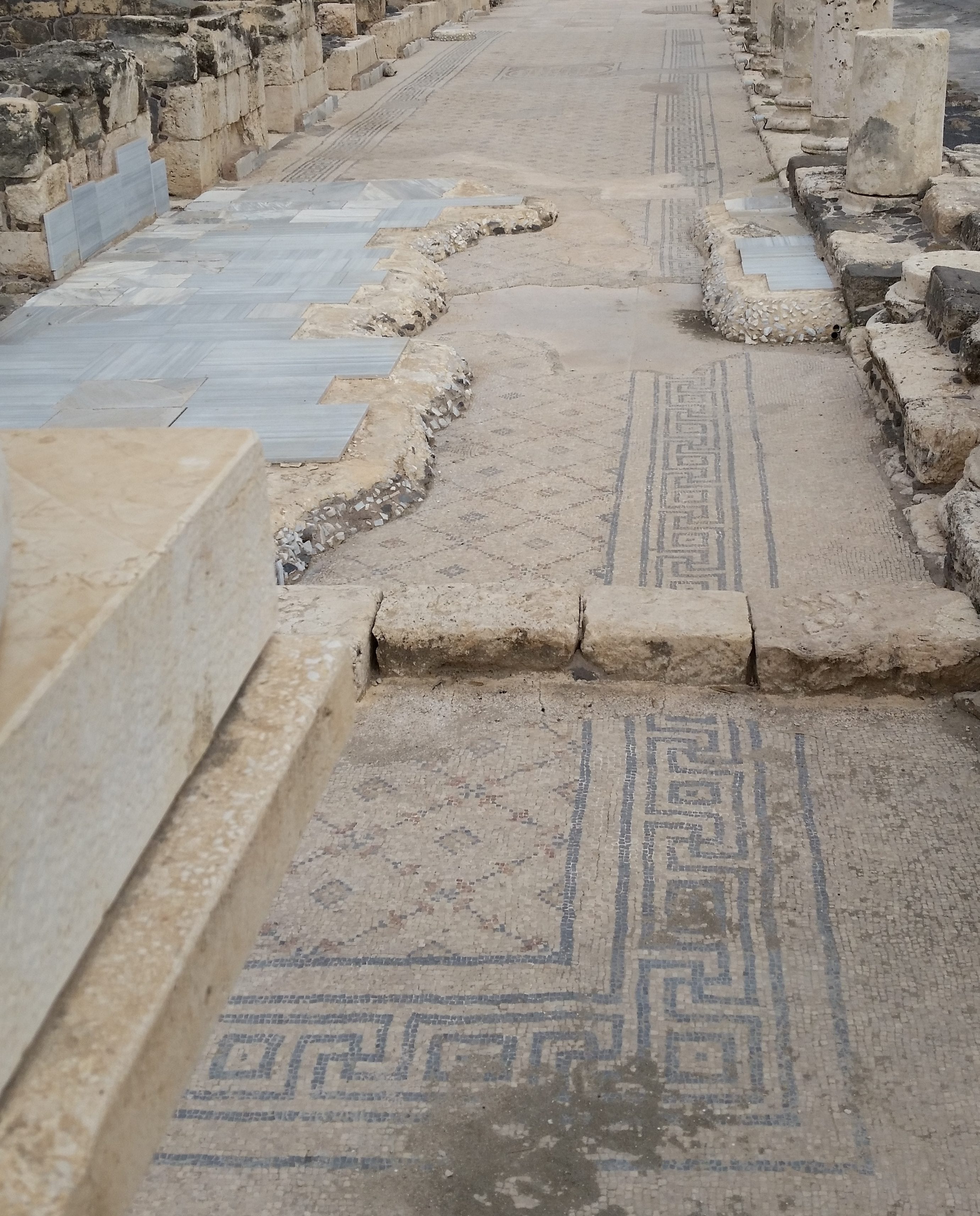 Mosaics along the Cardo Maximus 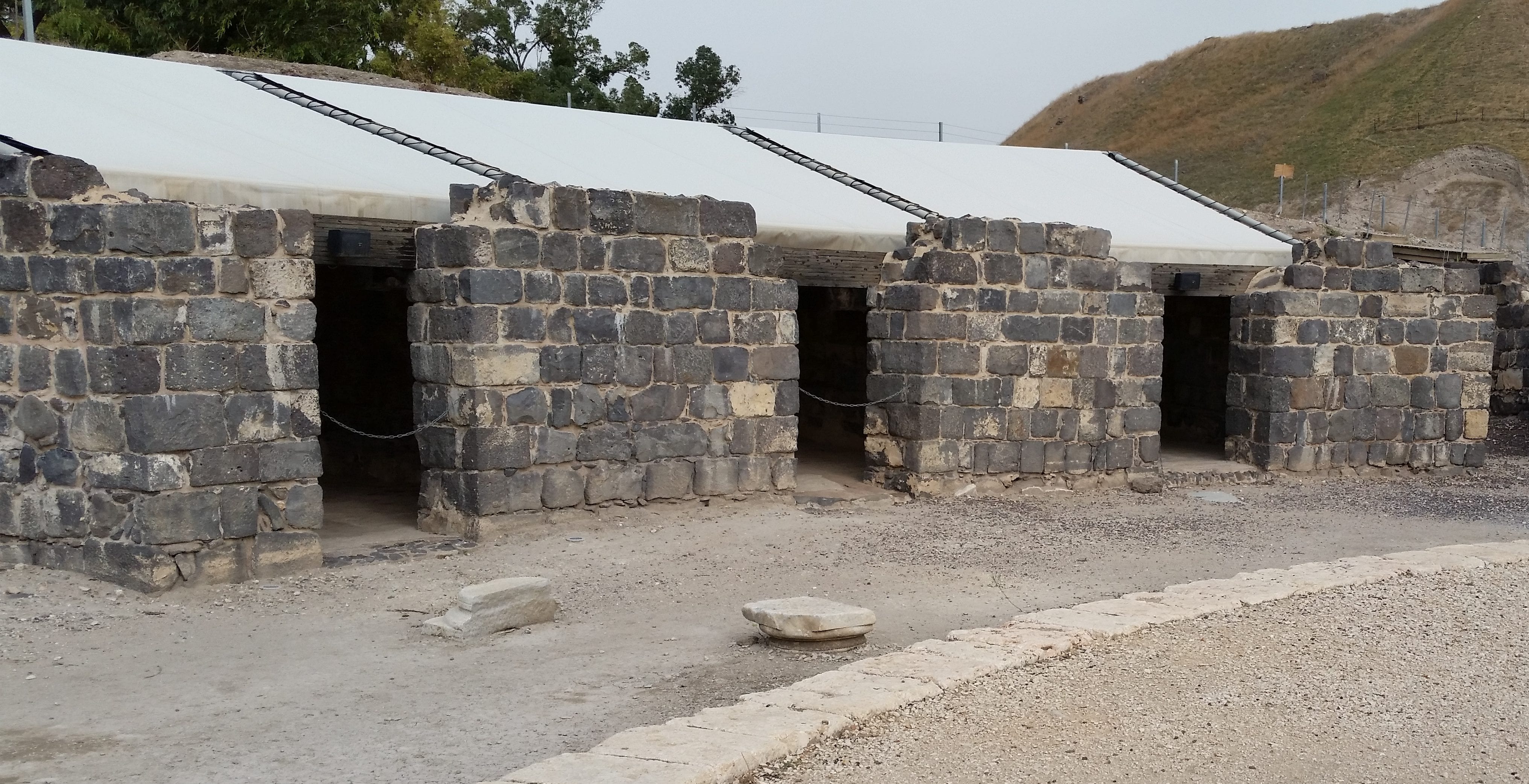 Shops off the Cardo Maximus 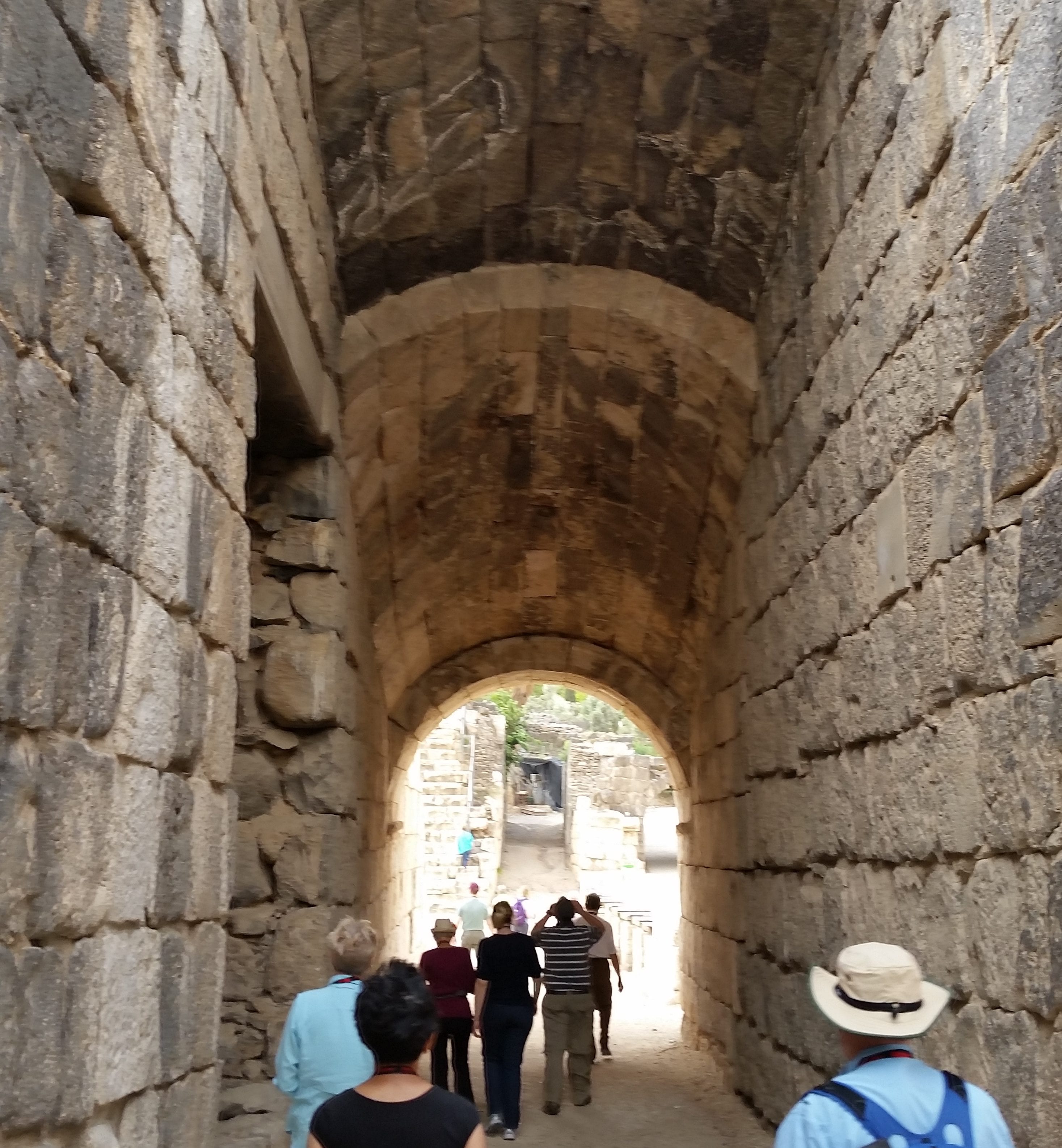 Entrance into the amphitheater 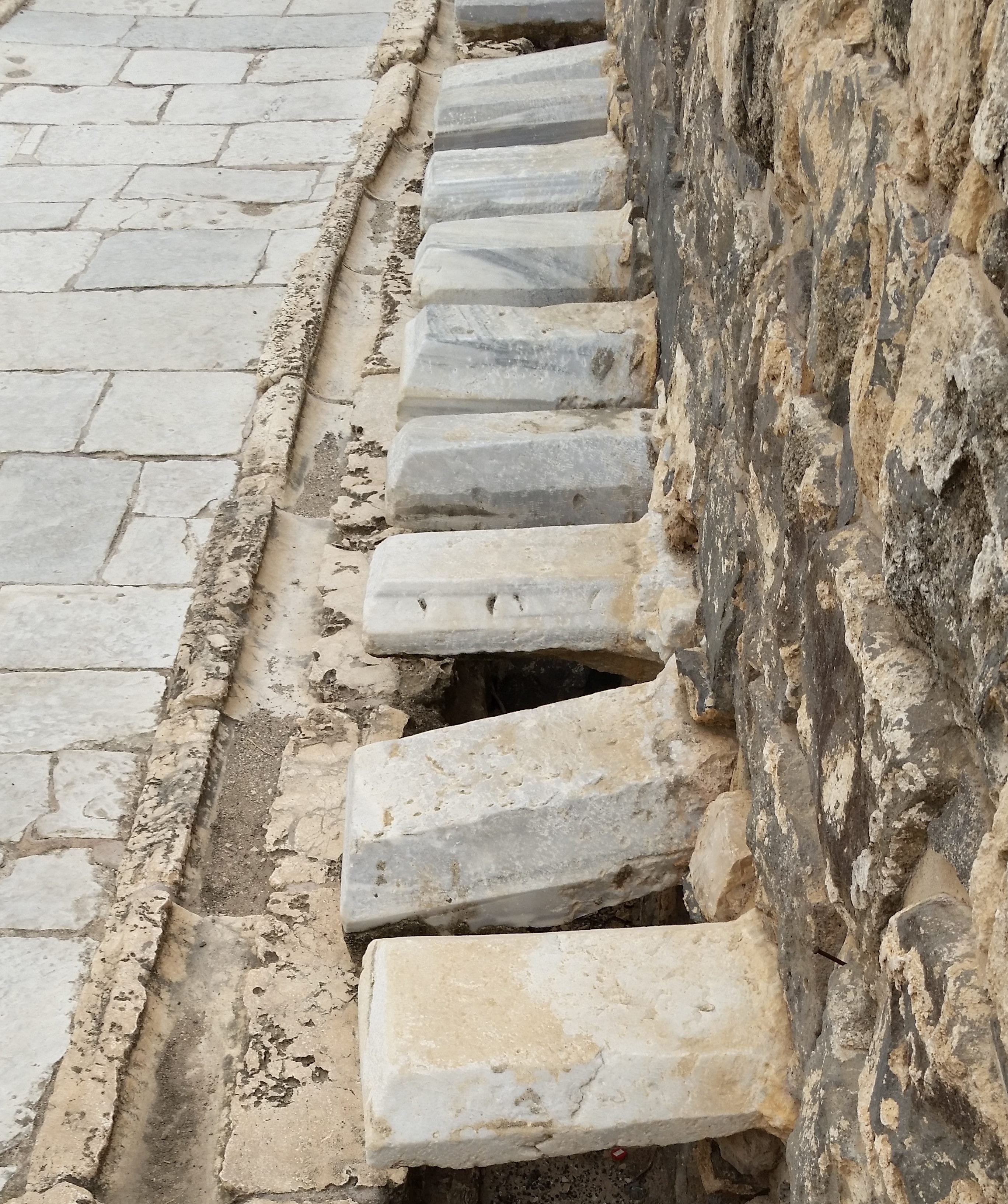 Our group posed for a photo in a well-preserved Roman amphitheater, where Judith (a professional dancer and choreographer) presented a spontaneous entertainment with much leaping and twirling. We also were amused by the adjacent ancient restroom with its rows of marble toilet seats. While there is a lot of imported marble in Bet She’an, many of its structures are built of basalt blocks from Mount Gilboa, only four miles away. The black stone provides a real distinction from the light golden limestone that characterizes both Jerusalem and Amman.

From Bet She’an, we turned west toward Megiddo, another strategically located, historically important hilltop city on the other side of the Jezreel Valley. Like Bet She’an, the tel was inhabited in prehistoric times; we saw a Canaanite prayer structure containing an altar that dates from about 5000 BC. 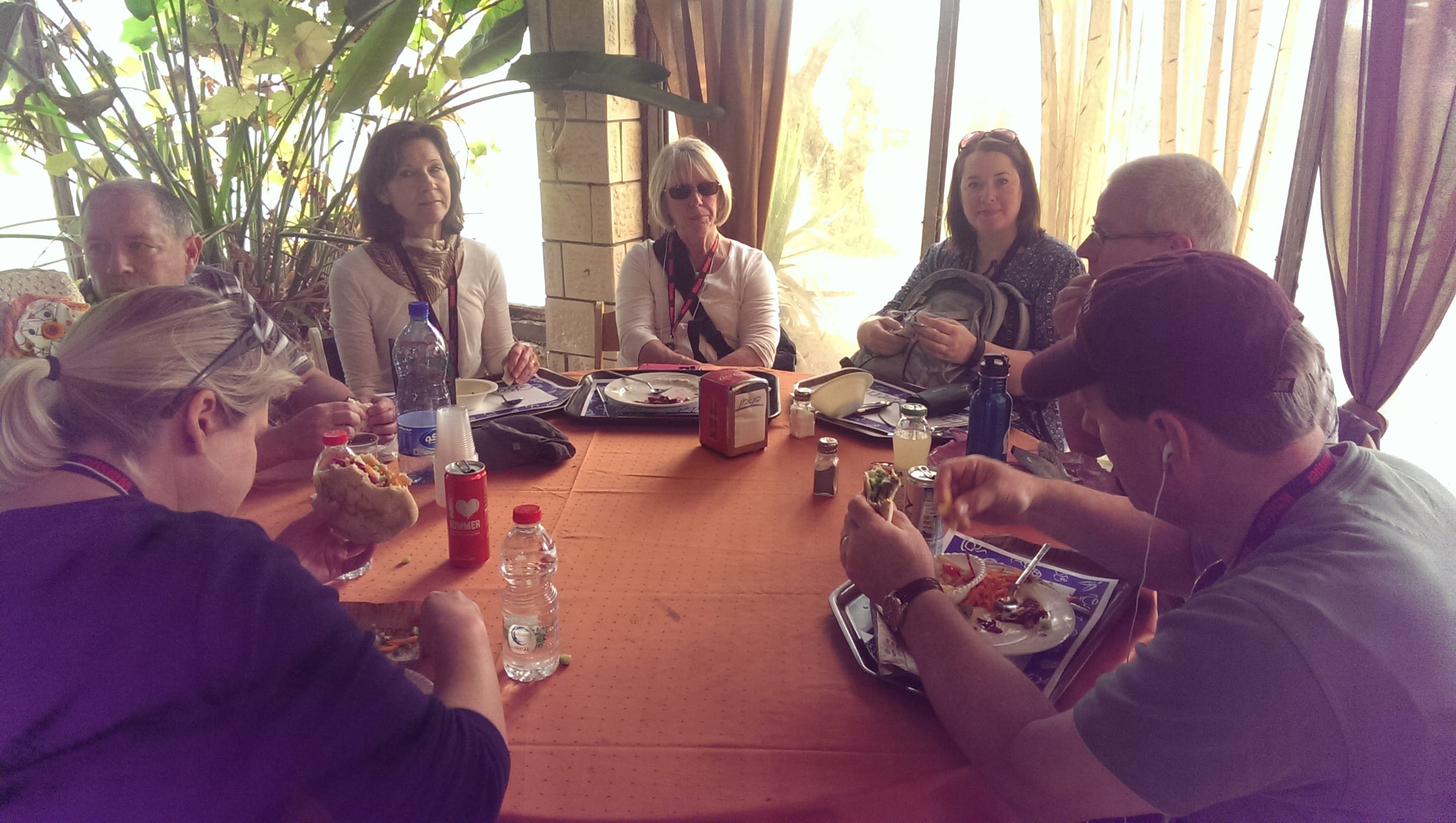 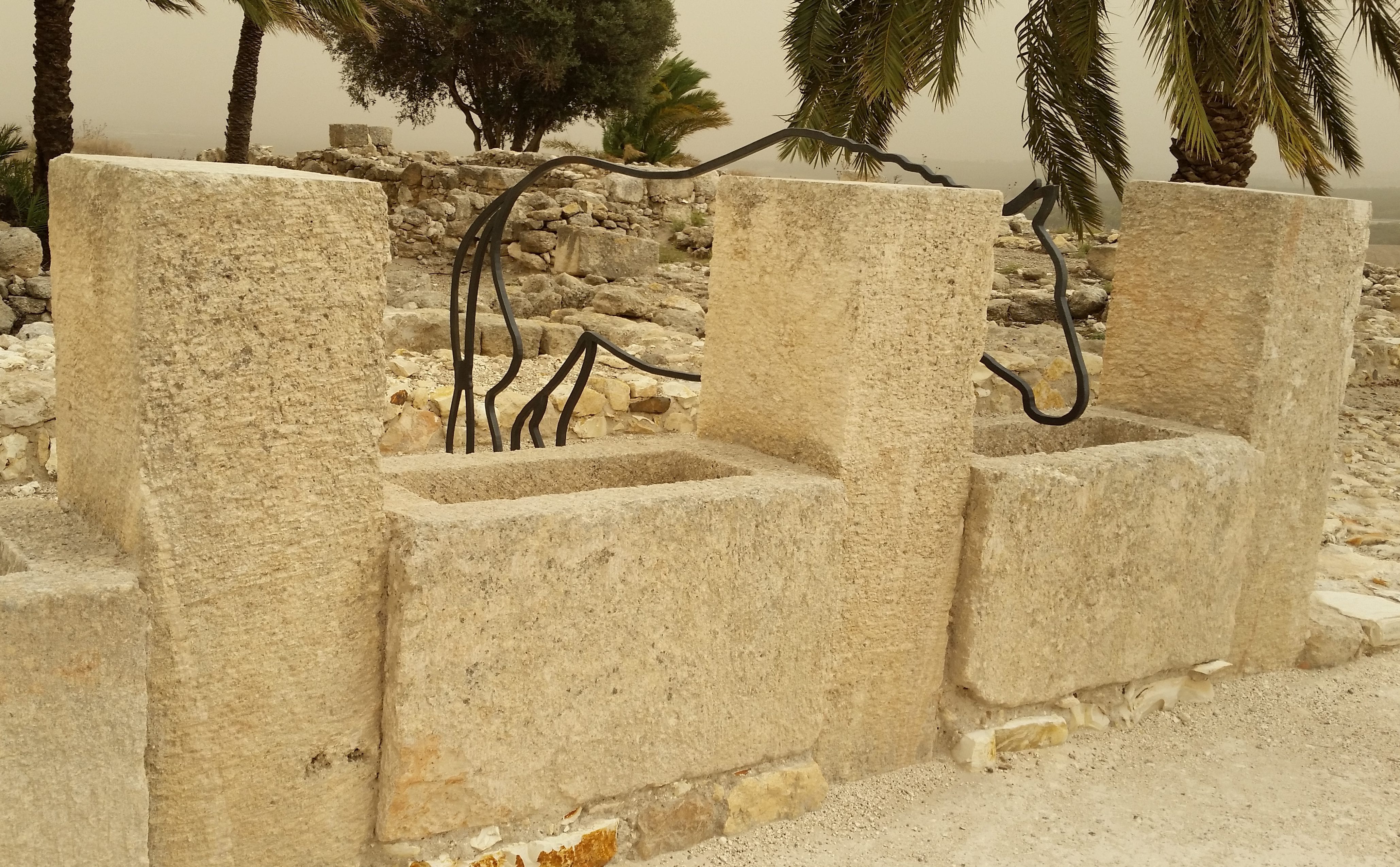 Egypt’s King Thutmose III conquered the Canaanite settlement in the mid-fifteenth century BC and built an elaborate palace here. By the time David captured the city from the Philistines in the tenth century BC, there were already layers from fourteen previous cycles of destruction and rebuilding. King Ahab, who reigned over the Northern Kingdom of Israel during the ninth century, made Megiddo his capital. We climbed a winding paved road rutted with chariot wheels, and saw stables built for six hundred horses. We also saw the waterworks Ahab had constructed to bring spring water into the city much like those Hezekiah later built in Jerusalem, although not as extensive. 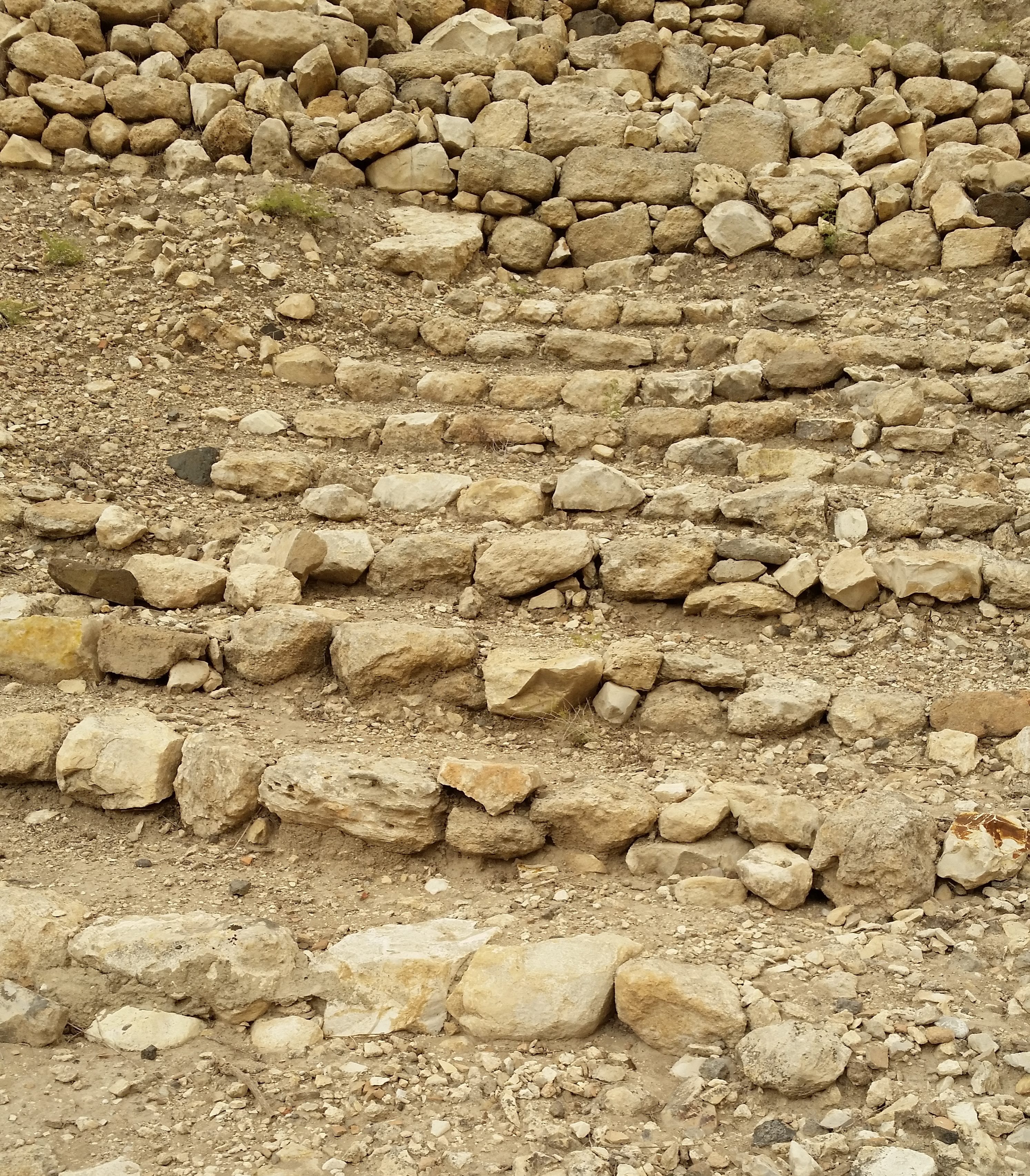 Steps leading up to the fortress 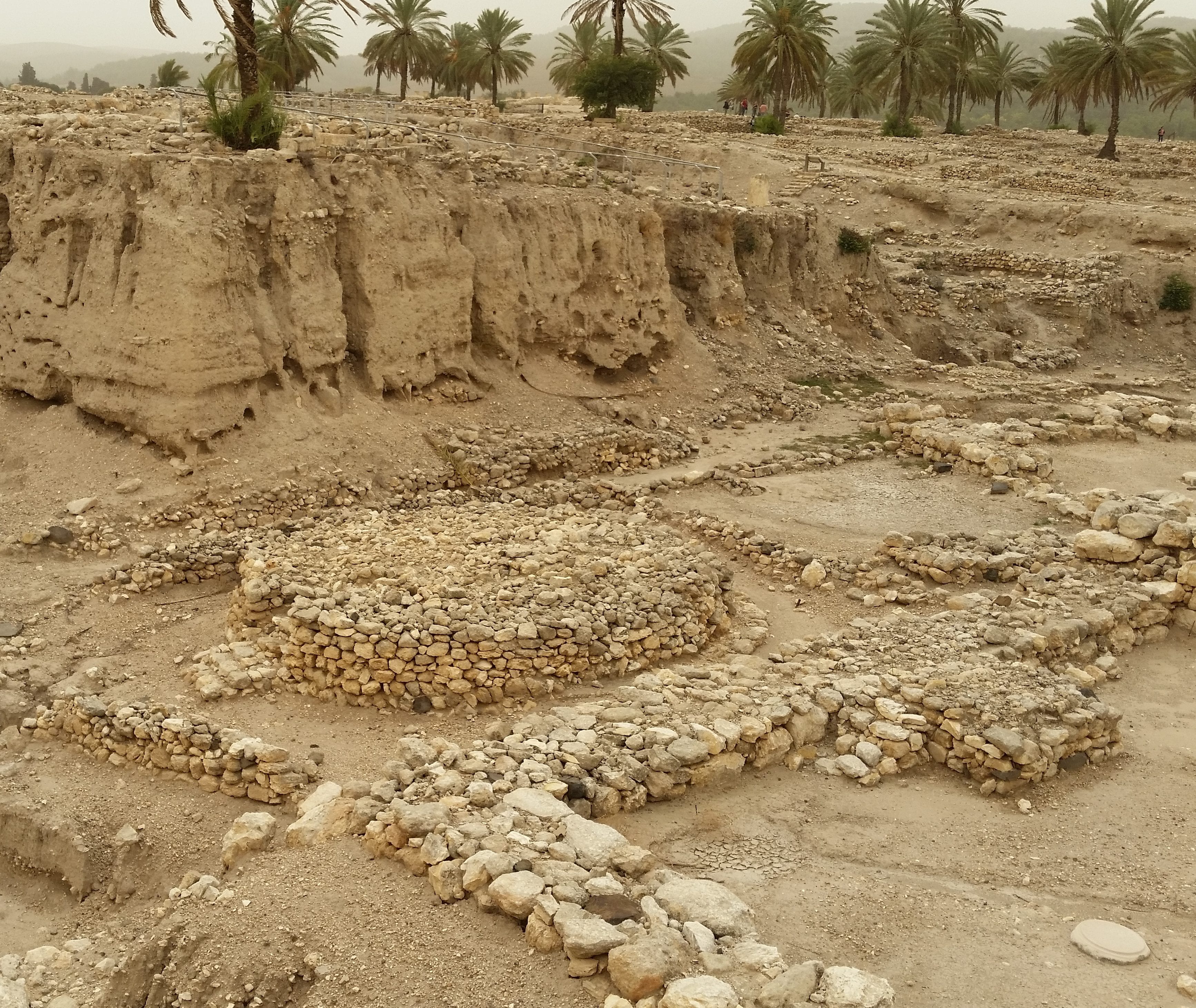 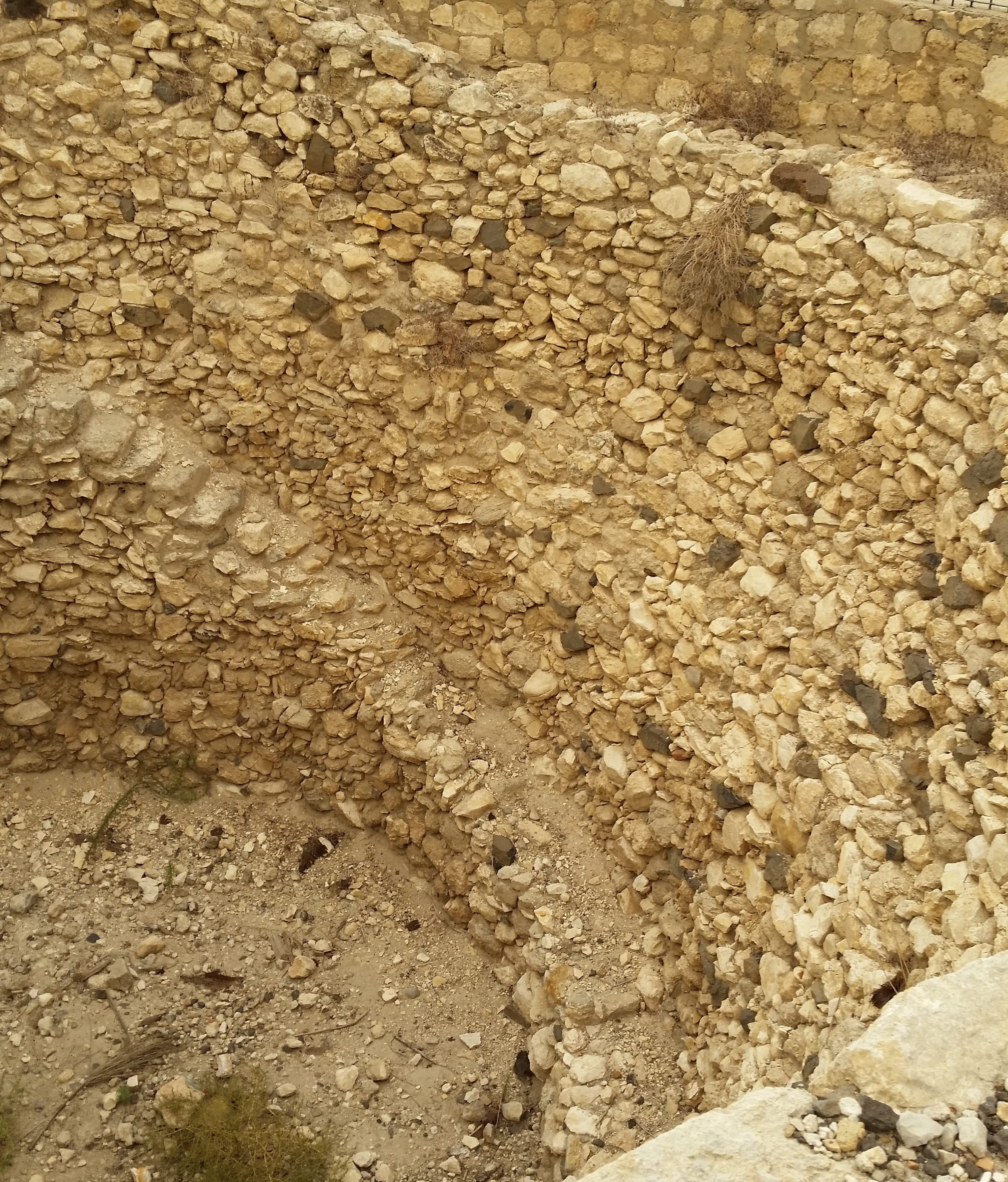 Trails down to the cistern

The Assyrians took over Megiddo along with the rest of the Northern Kingdom in the sixth century BC, but in the fourth century, the tel was abandoned and never rebuilt–thus preserving at least thirty layers of ruins. 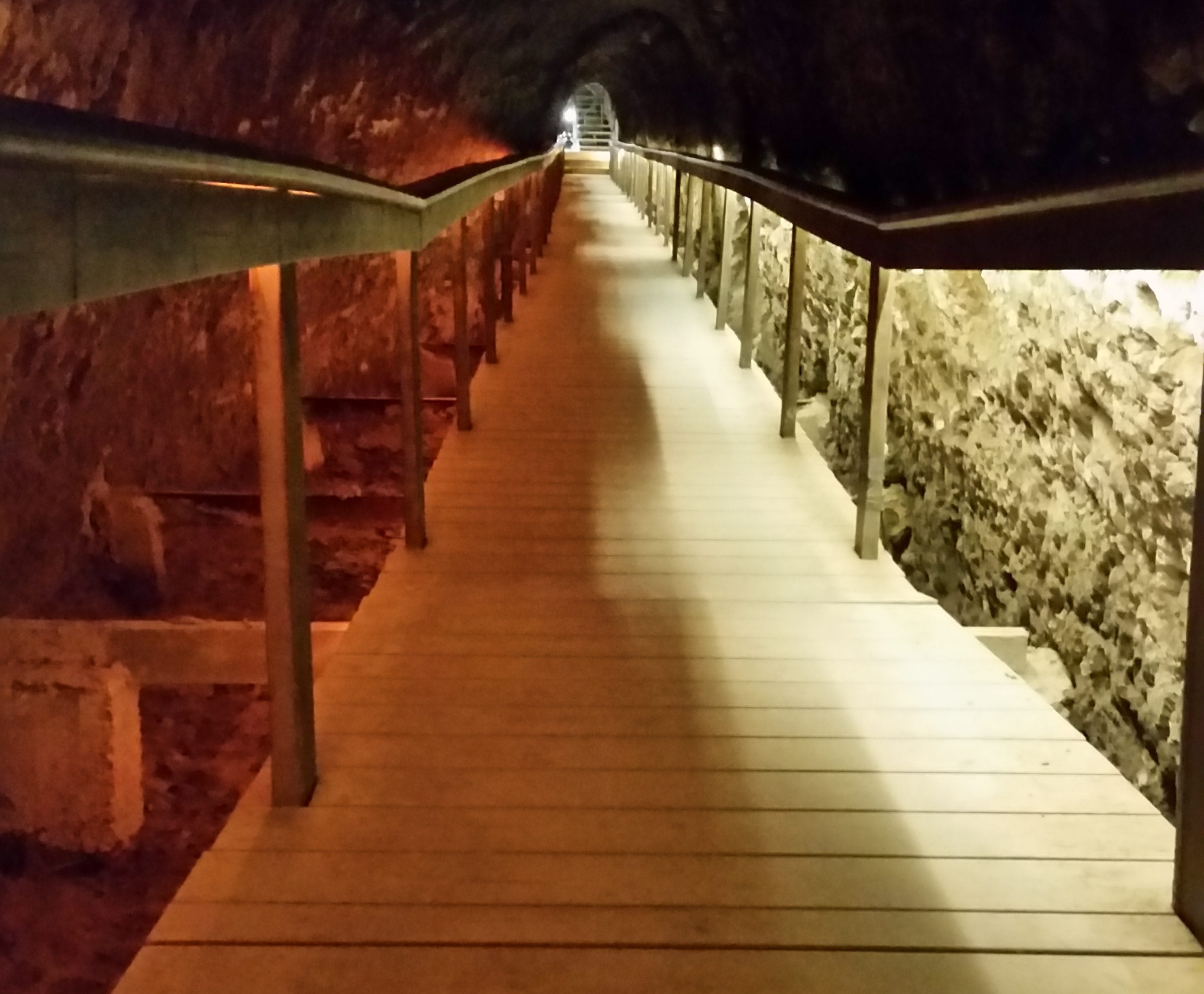 Through the water tunnels 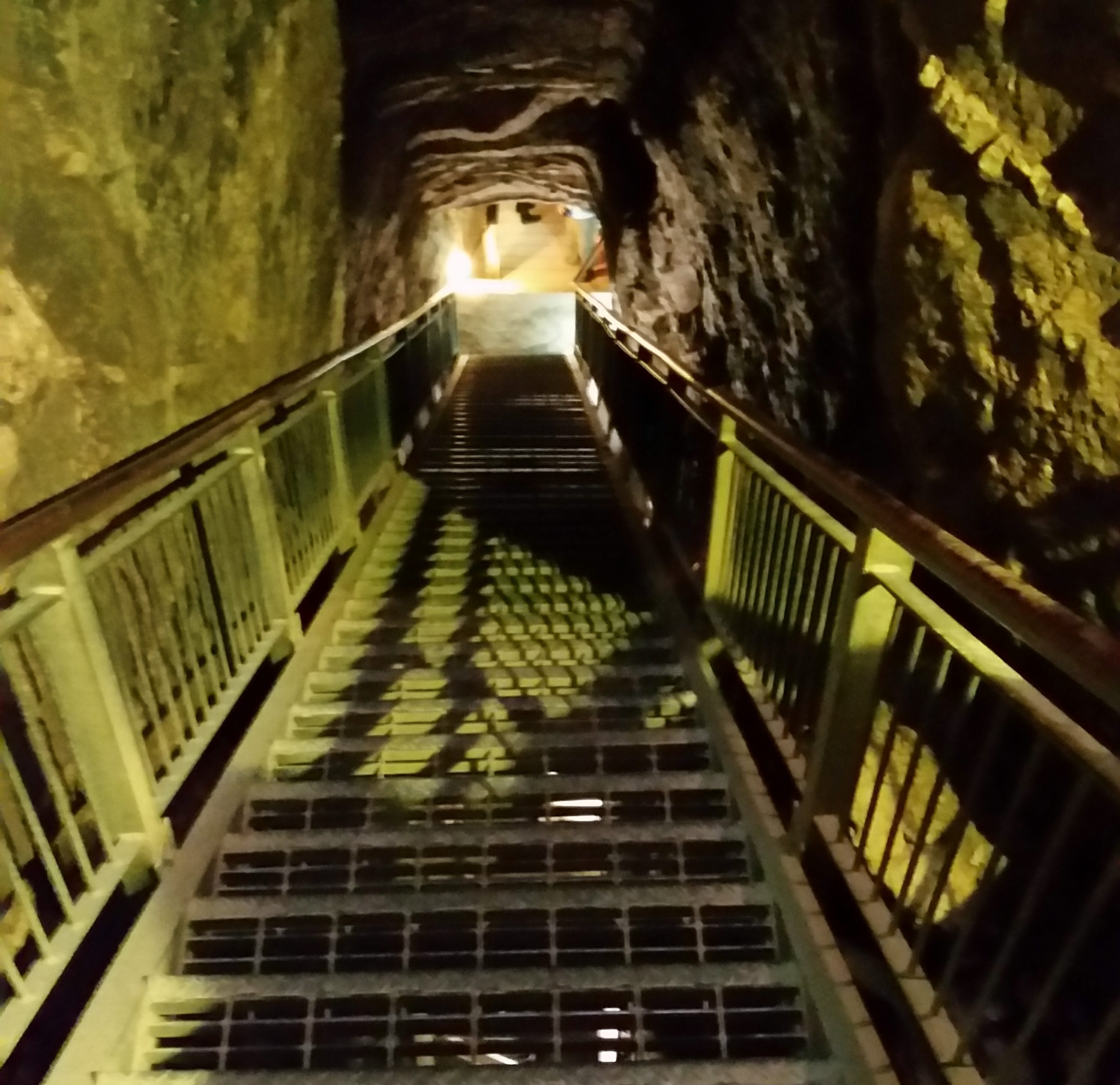 Steps down to the cistern 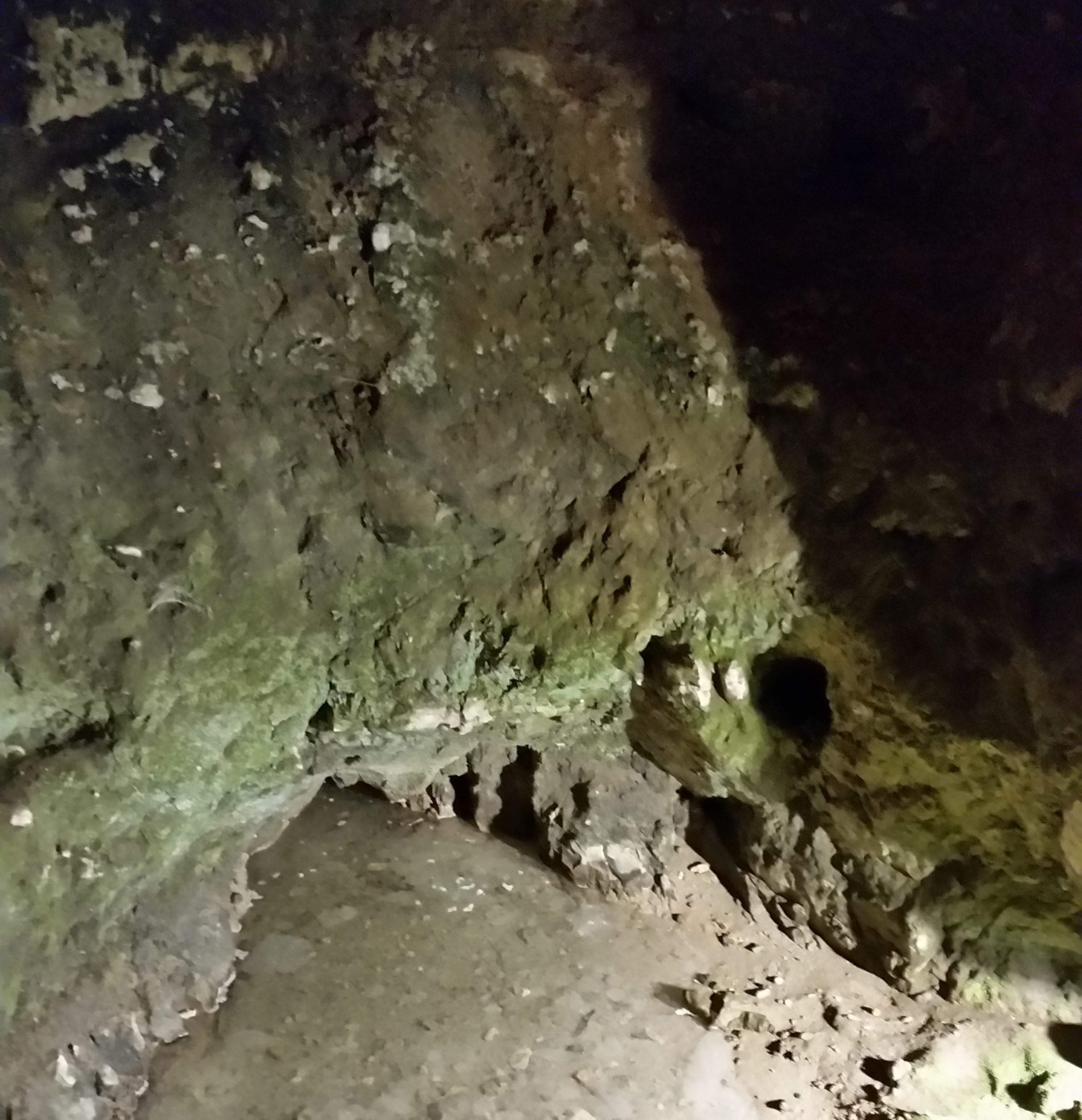 Bottom of the cistern

Although Meggido has not been inhabited for hundreds of years, the pass it overlooks has continued to see military action. At the end of World War I, Great Britain’s General Allenby routed the Turkish army here–earning him the nickname “Lord of Armageddon.” (Armageddon is the Greek form of Megiddo). The site remains important in the Christian imagination because of John’s prediction in the Book of Revelation that the last great battle before Christ’s Second Coming will take place here. Perhaps not coincidentally, the modern-day Israeli Air Force maintains a huge underground air base in the valley below the tel. Jim told us that on a clear day (which today was not), one can sometimes watch fighter jets descend and then disappear into the hidden hangars. Cotton grows in the green and deceptively placid fields above them.

Valley of Armageddon, low visibility due to wind and sand 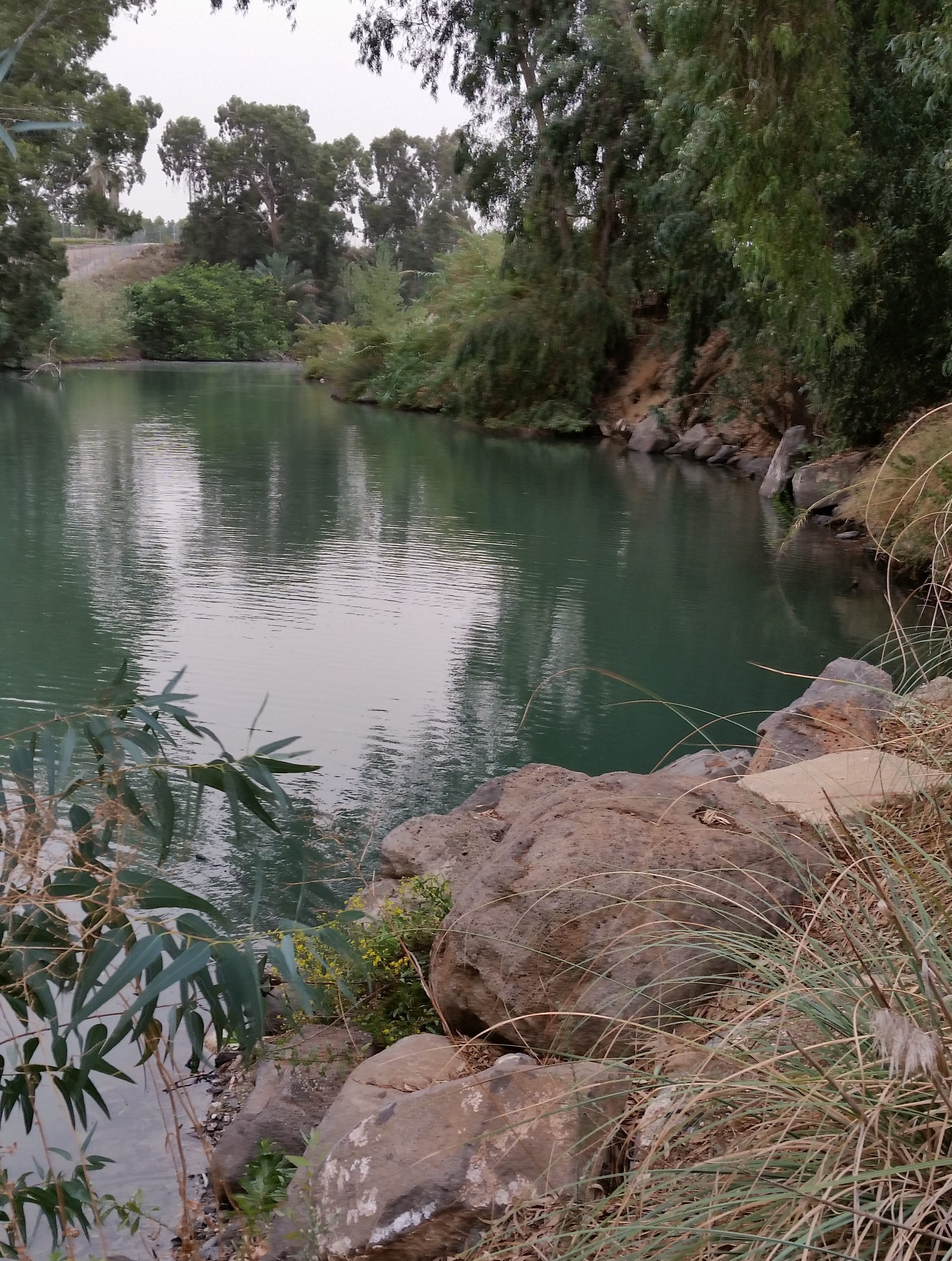 Yardenit on the banks of the Jordan River

The last site we visited today has no history of military conquest, no ancient ruins, no ornate churches, no “exact spots.” Yardenit is simply a pleasant reserve on the banks of the Jordan River that seeks to replicate the environment of biblical Bethabara, where John the Baptist immersed his disciples as a token of their commitment to God. While the river we had seen farther south when we crossed from Jordan into Israel had been reduced to a muddy trickle, here abundant water flowed smoothly under the palm and eucalyptus trees lining its banks. The verdant setting was refreshing after all the time we have spent surrounded by stone and sand this week, but what made Yardenit truly fascinating is that it has become a magnet for Christian pilgrims who want to be baptized in the same river as the Savior. 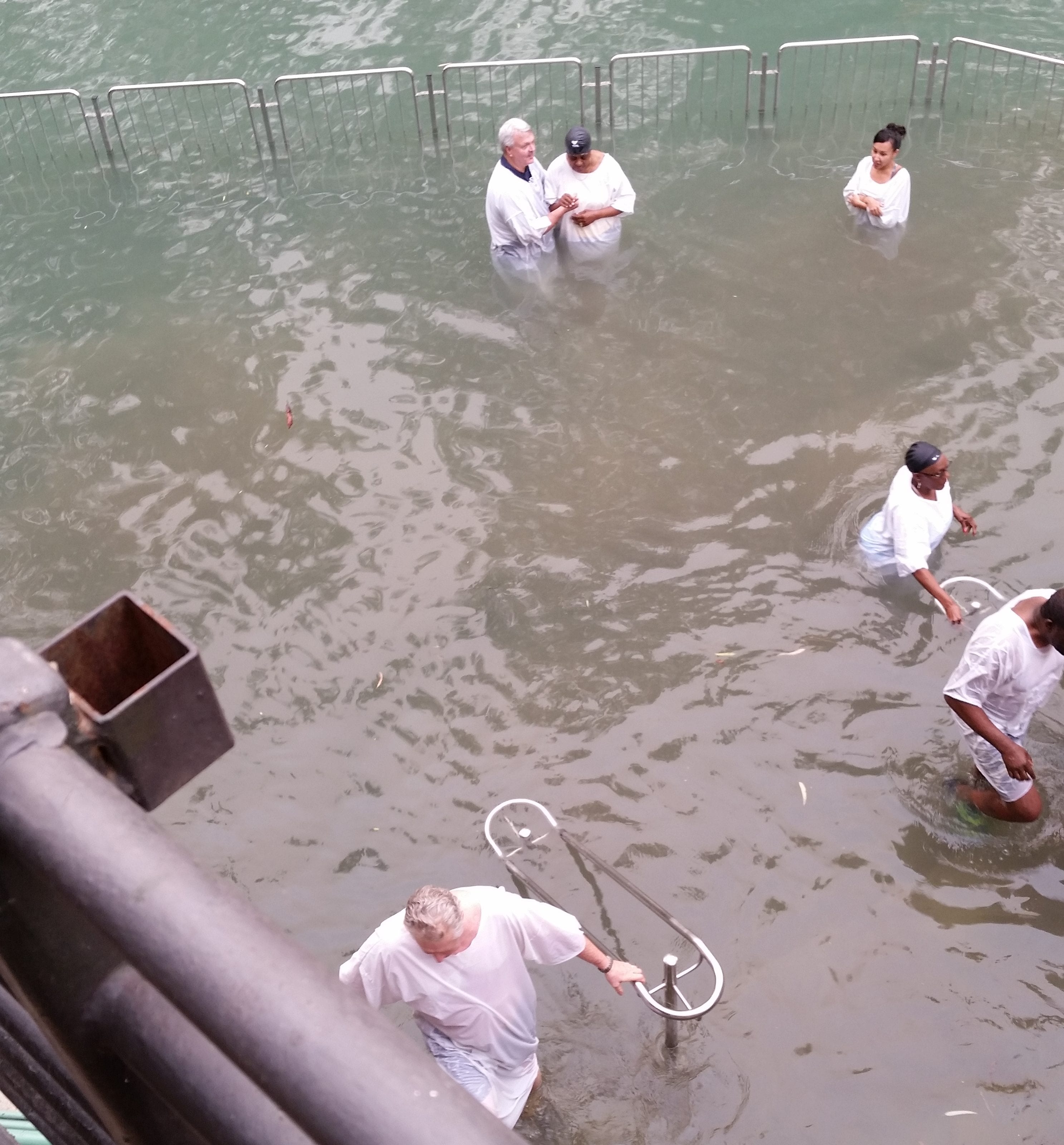 Christian baptisms in the Jordan

This afternoon, we witnessed the baptism of dozens of people, most of them wearing loose white robes that they had rented onsite. One group had come from Connecticut with their pastor, who was dunking his parishoners as they waded toward him in an orderly line. There was much applause and shouting of “Hallelujah!” After the pastor came out of the water and was drying off, we thanked him for letting us share in his group’s joy, and asked what he had said to each supplicant before he immersed them. He told us that he simply asked, “Do you confess Jesus to be your Savior and Redeemer?” and then performed the ordinance “in the name of the Father, the Son, and the Holy Ghost”–which is pretty close to the way Latter-day Saints are baptized. 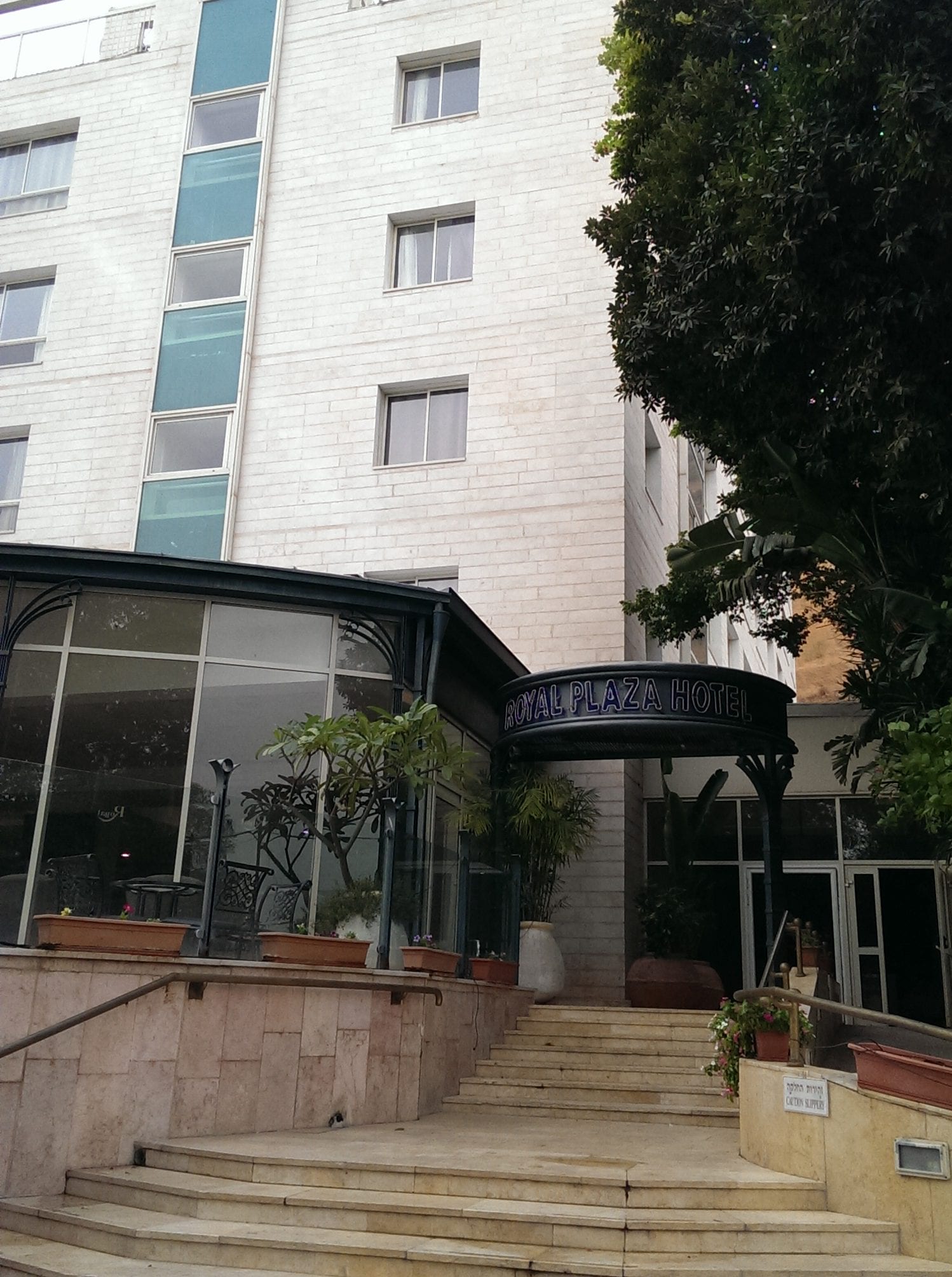 Tonight we settled into the Royal Plaza Hotel in Tiberias, where we would spend our final two nights in Israel. Our fifth-floor room overlooked the dumpsters at the back of the hotel instead of the Sea of Galilee on the other side, but we didn’t mind. What we did mind was that the thermostat didn’t work, and our room was freezing. It must not have been a unique problem because Jim remarked at dinner that his room was so cold “you could hang meat in it.” The buffet was good, though. When Scott came back to our table carrying his third plate of food, he looked at us sheepishly and said, “Hi. My name is Scott and I’m a food-aholic.”

The conference room where we held our devotional was big enough so we could arrange twenty-six chairs in a single circle. In anticipation of tomorrow’s itinerary, Heidi reminded us that when Peter cried, “Lord, save me!” as he attempted to walk toward Jesus on the water, the Savior immediately extended his hand. Like Peter, she said, we can trust that the Lord will extend his hand to us whenever we need his help.