Shabbat in Jerusalem: Not the Witches’ Sabbath

Shabbat in Jerusalem: Not the Witches’ Sabbath 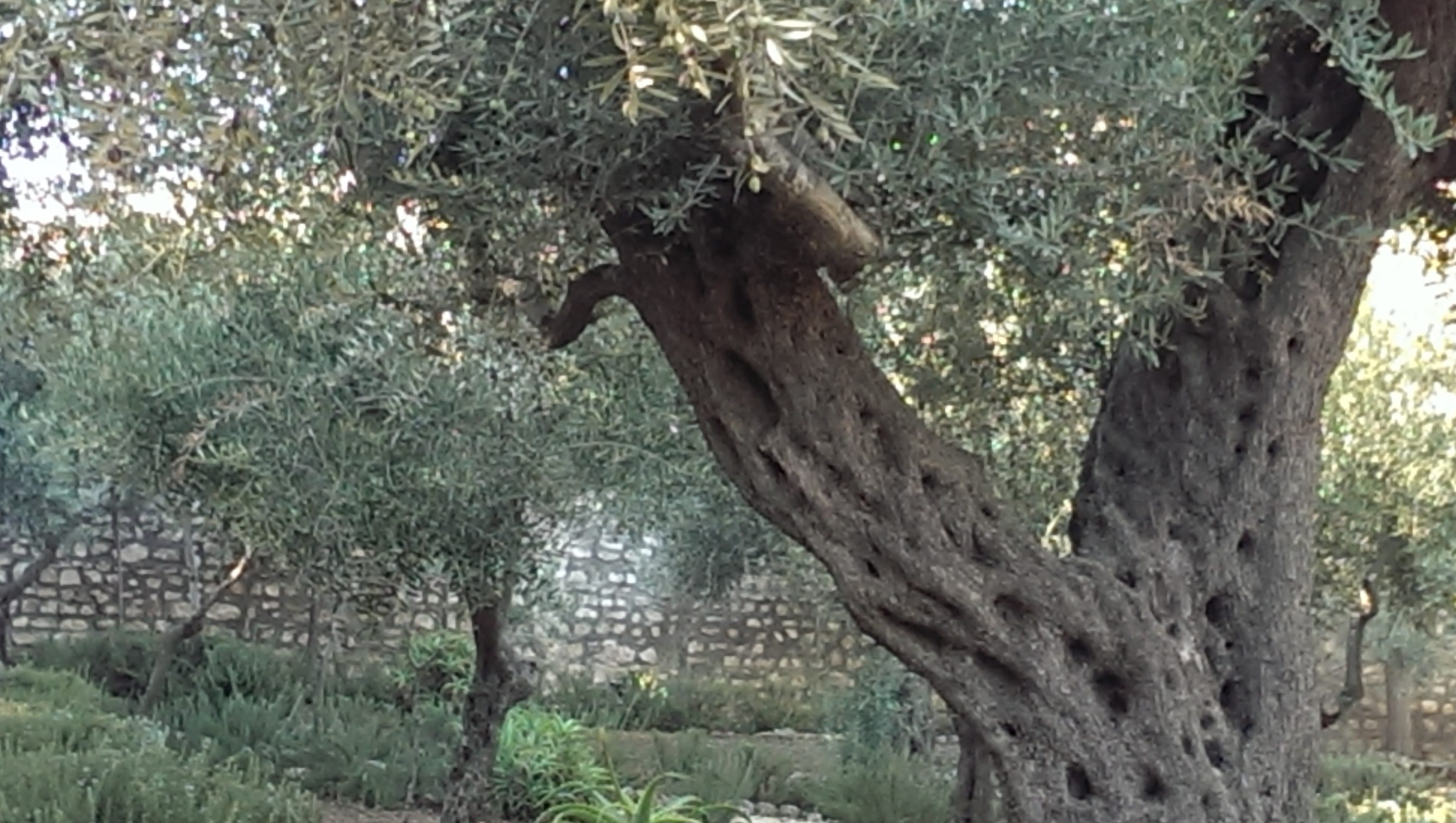 Olive trees in the Garden of Gethsemane

Before granting approval for Brigham Young University to build its Jerusalem Center for Near Eastern Studies in the 1980s, the Israeli government stipulated that members of the Church of Jesus Christ of Latter-day Saints who came here to study must refrain from any proselytizing. At the same time, the government also requested that LDS Church members observe their weekly sabbath on the same day as their Jewish hosts: Saturday. Thus, while most of our friends back in the States have spent their Saturday eating Halloween candy and posting pictures of their kids in cute costumes on Instagram, we in the Holy Land have been quietly celebrating shabbat.

Remembering Christ’s atonement in the Garden of Gethsemane 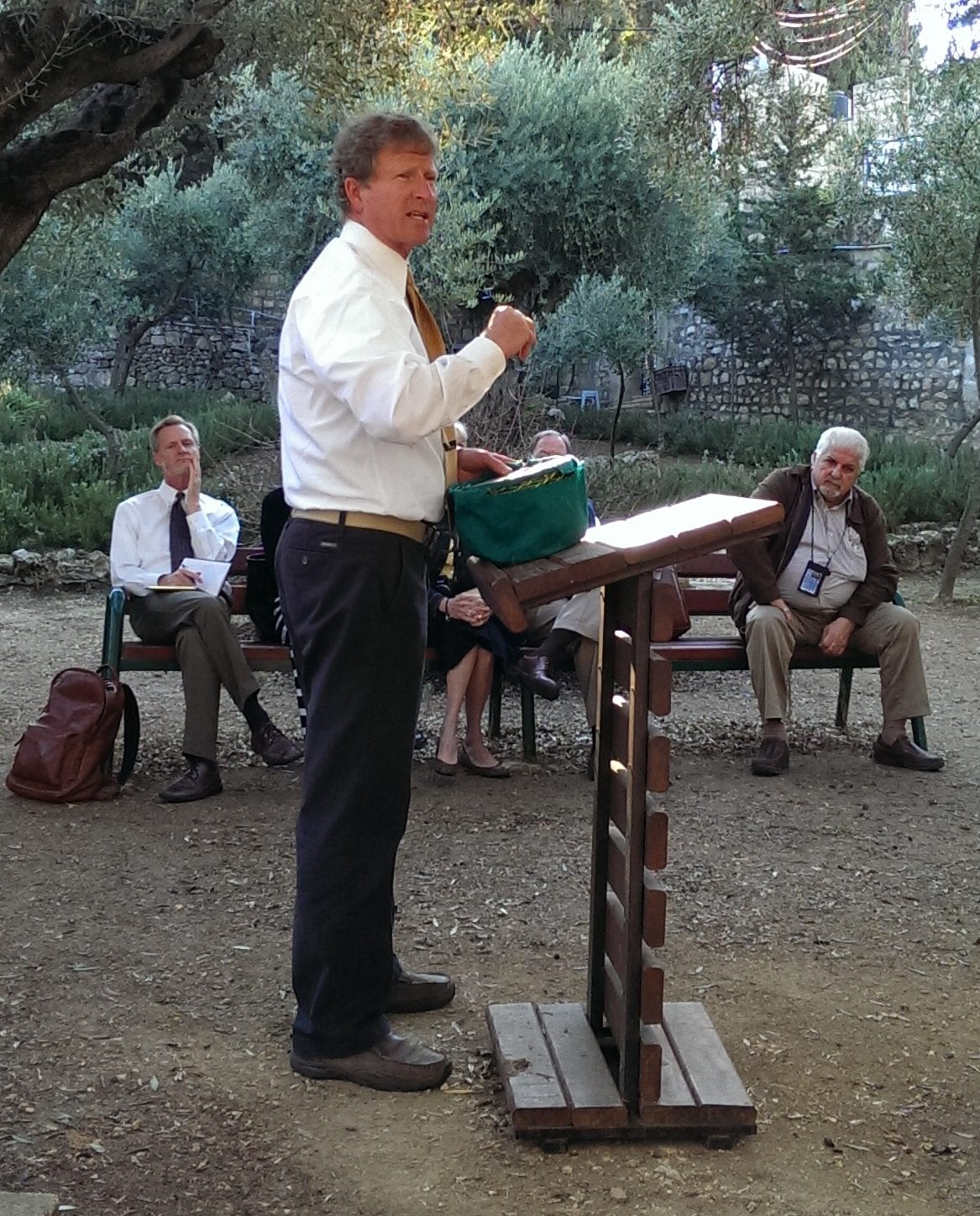 Before attending a sacrament service at the BYU Center, our group held an early-morning devotional in the Garden of Gethsemane, the place where Jesus Christ began his suffering in our behalf. Jim and Samir had arranged with the Garden’s Franciscan caretakers for us to meet in a private grove across the lane from the public area. There, we sang some hymns about the Savior, and Pat shared her gratitude for Christ’s atonement and the solace it has brought her, particularly in the nine years since the death of her husband. After she finished, we were encouraged to seek out a secluded spot somewhere in the grove where each of us could spend about half an hour in personal contemplation. Individual seclusion was difficult because the Franciscans’ grove is not very big, and this morning we were sharing it with another group; nevertheless, the place was inspiring and offered a spirit of calm despite the noise and bustle beyond its walls. 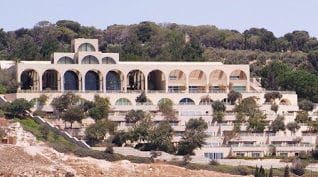 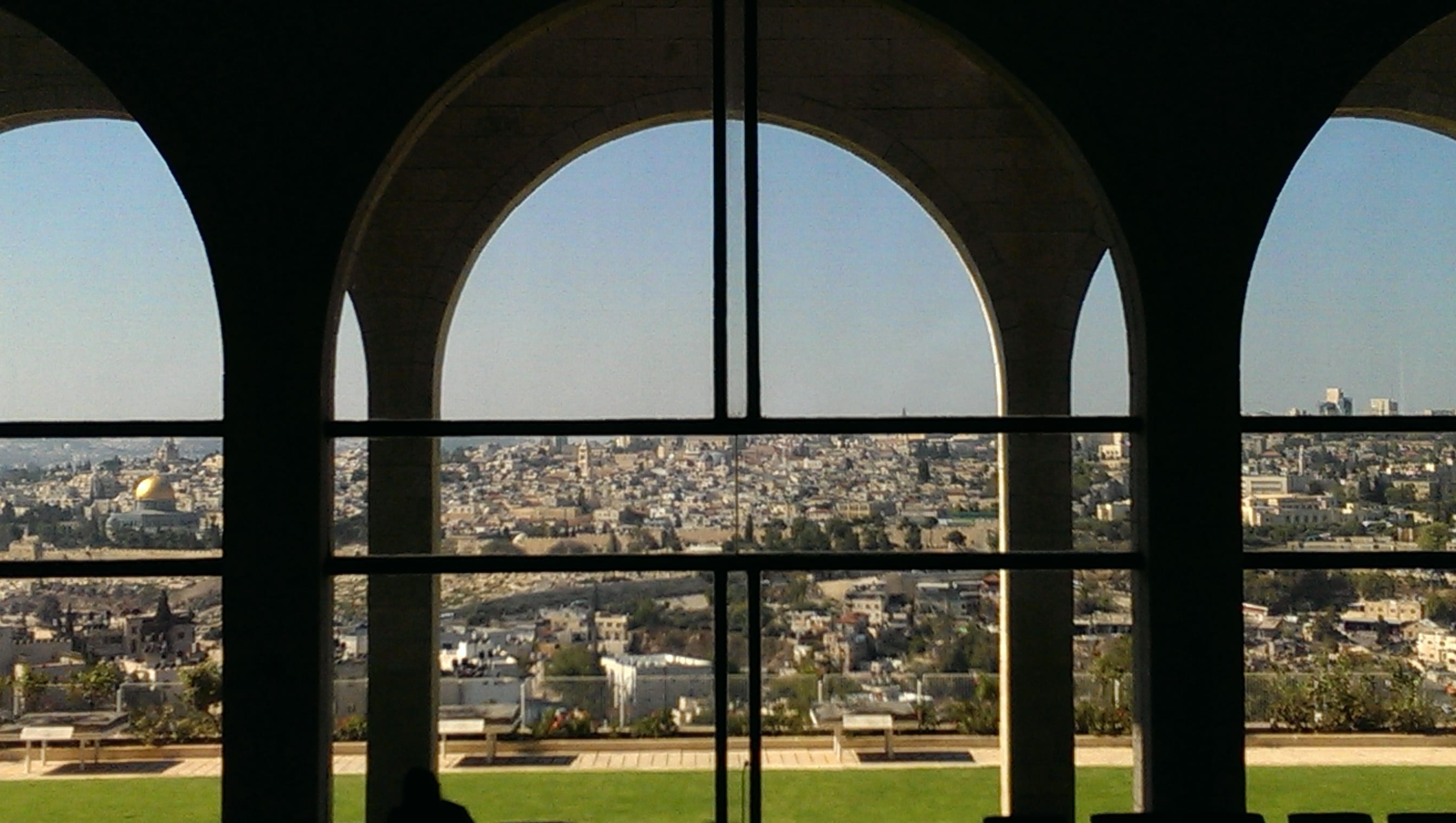 The BYU Jerusalem Center is located on Mount Scopus, less than a mile north of the Garden of Gethsemane. Its outdoor terrace commands a dramatic view of the Temple Mount and the rest of the walled city across the Kidron Valley. Congregants in the center’s auditorium enjoy the same view through an expanse of arched windows that rise three stories behind the lectern. Some people who attended sacrament meeting this morning said they found the spectacular backdrop distracting, but both of us were moved by the scene, especially as we took the sacrament and sang familiar hymns that now have new meaning for us. The Jerusalem Branch of the LDS Church consists mostly of the BYU students who live in the dorms on the center grounds, the faculty and staff, and a handful of LDS ex-pats who work in the area. Their numbers are hardly sufficient to fill the 250-seat auditorium, but since ours is only one of several LDS tour groups in Jerusalem this week, not many seats were left empty during this morning’s service. 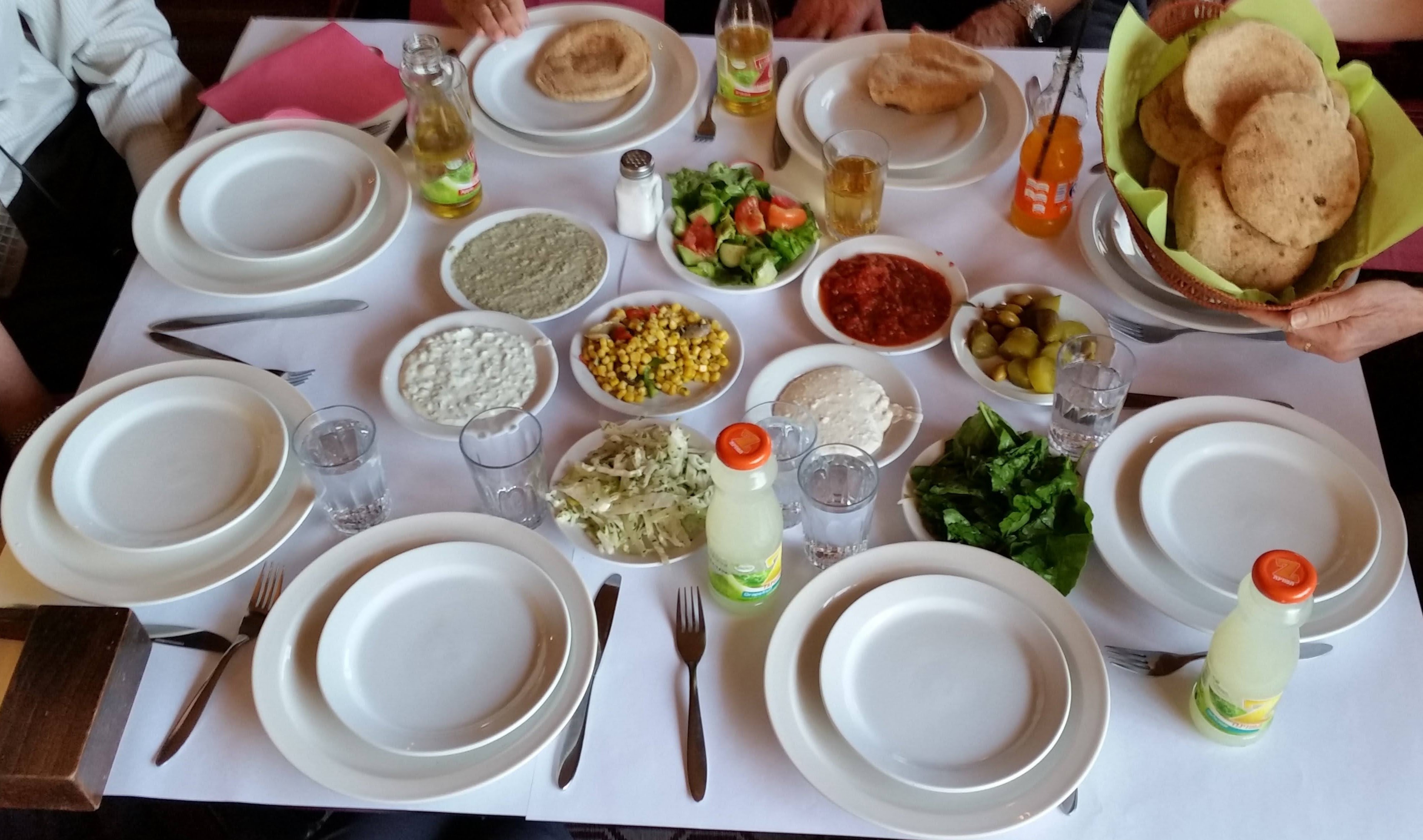 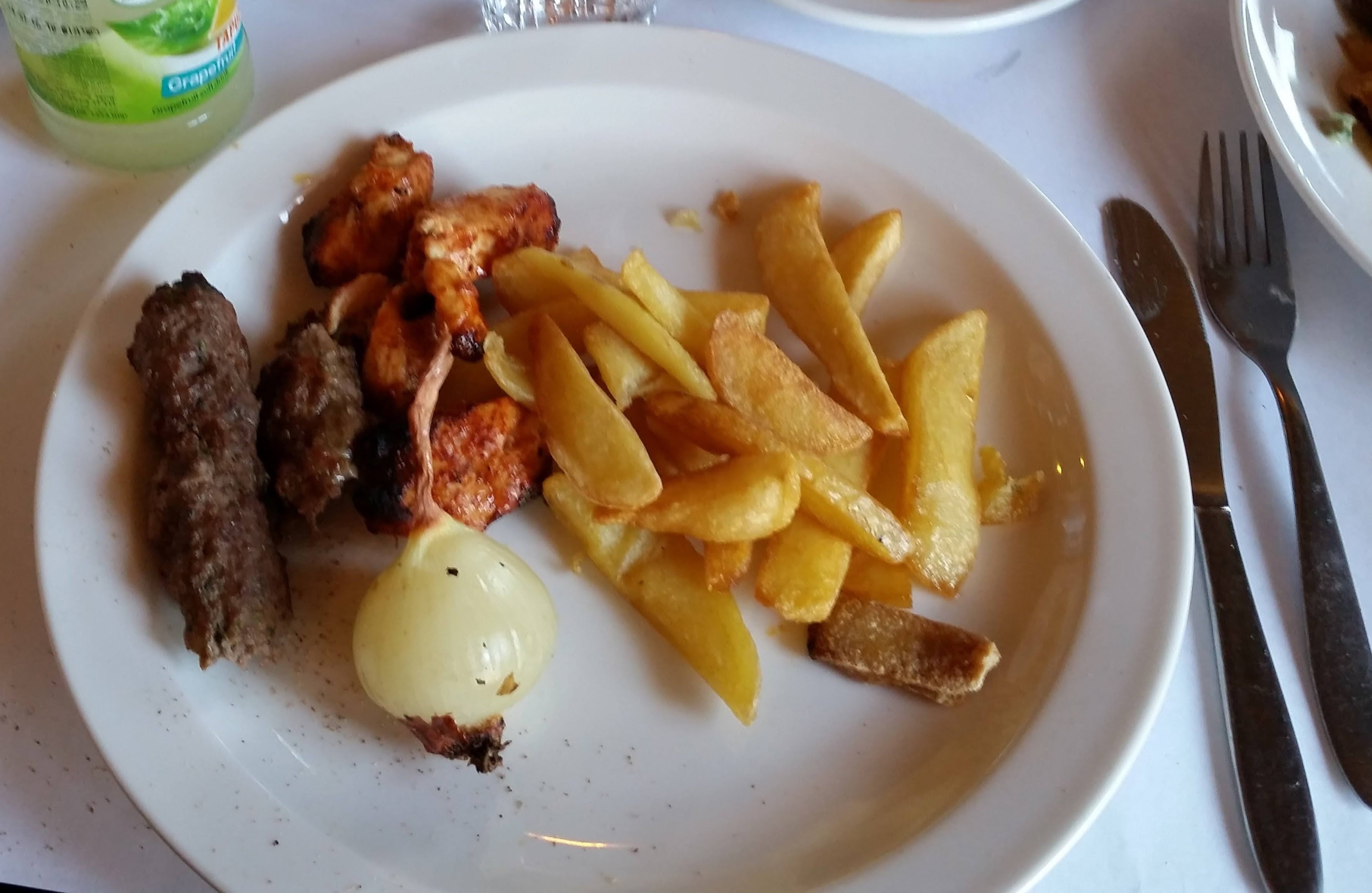 Our group did not stay for the additional Sabbath School, Priesthood, and Relief Society meetings; instead, we reboarded the bus and headed to Bethlehem. Before visiting the tradtional site of Christ’s nativity, however, we stopped for lunch at the Shepherds Valley Village Tent Restaurant. Most of our previous lunch stops have been at fast-food or cafeteria-style eateries, but at this picturesque venue we enjoyed a sit-down, three-course feast served family-style. We could have been fully satisfied with the many tasty and filling appetizer dishes, but the grilled meat kebabs and fries that came next were definitely not to be missed. And for dessert, there was baklava. The cost? $14 per person. 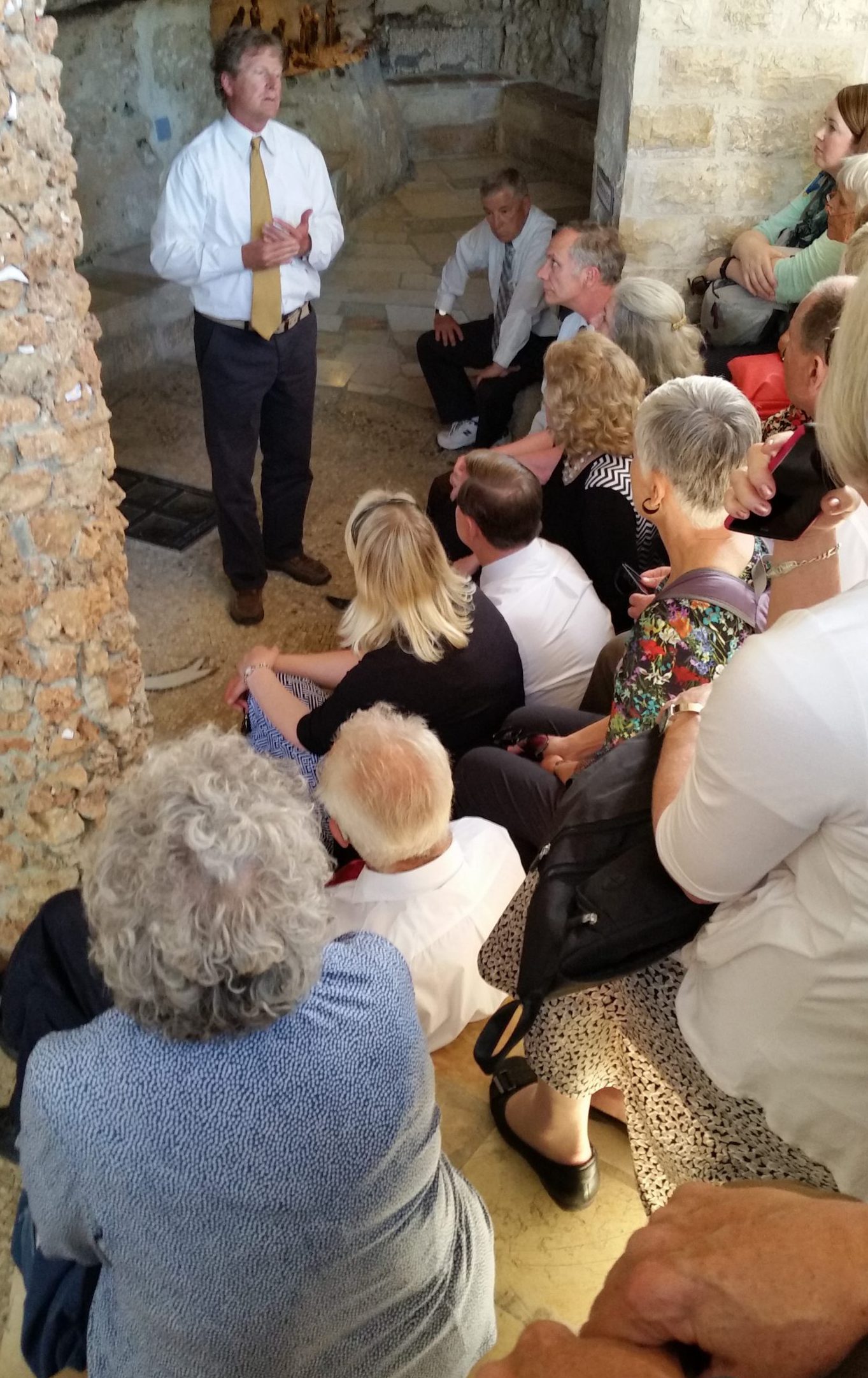 Jim’s lecture on the stable

Continuing on into Bethlehem, Nancy was dismayed to see that the little town she remembered–not much more than a cluster of woodcarvers’ shops around the Church of the Nativity in 1976–has now become a city like any other. Our bus discharged us into a noisy, fume-filled transportation depot where we had to run a gauntlet of coffee, magazine, and trinket shops before escaping into the sunlight. Jim and Samir herded us toward a Byzantine-era church that encloses a stone cave of the type that would have been used as a sheepfold or a stable at the time of Christ’s birth. Banish those visions of fluffy sheep scattered across the hillside under a starry sky from your minds: the shepherds who were “keeping watch over their flocks by night” were likely hanging around outside a cave when they heard angel voices over the bleating of their pent-up sheep. Likewise, the stable where Joseph and Mary lodged was not the kind of wooden shed depicted in most nativity scenes; it, too, would have been a cave, with a cold, hard, stone manger to cradle the holy child. 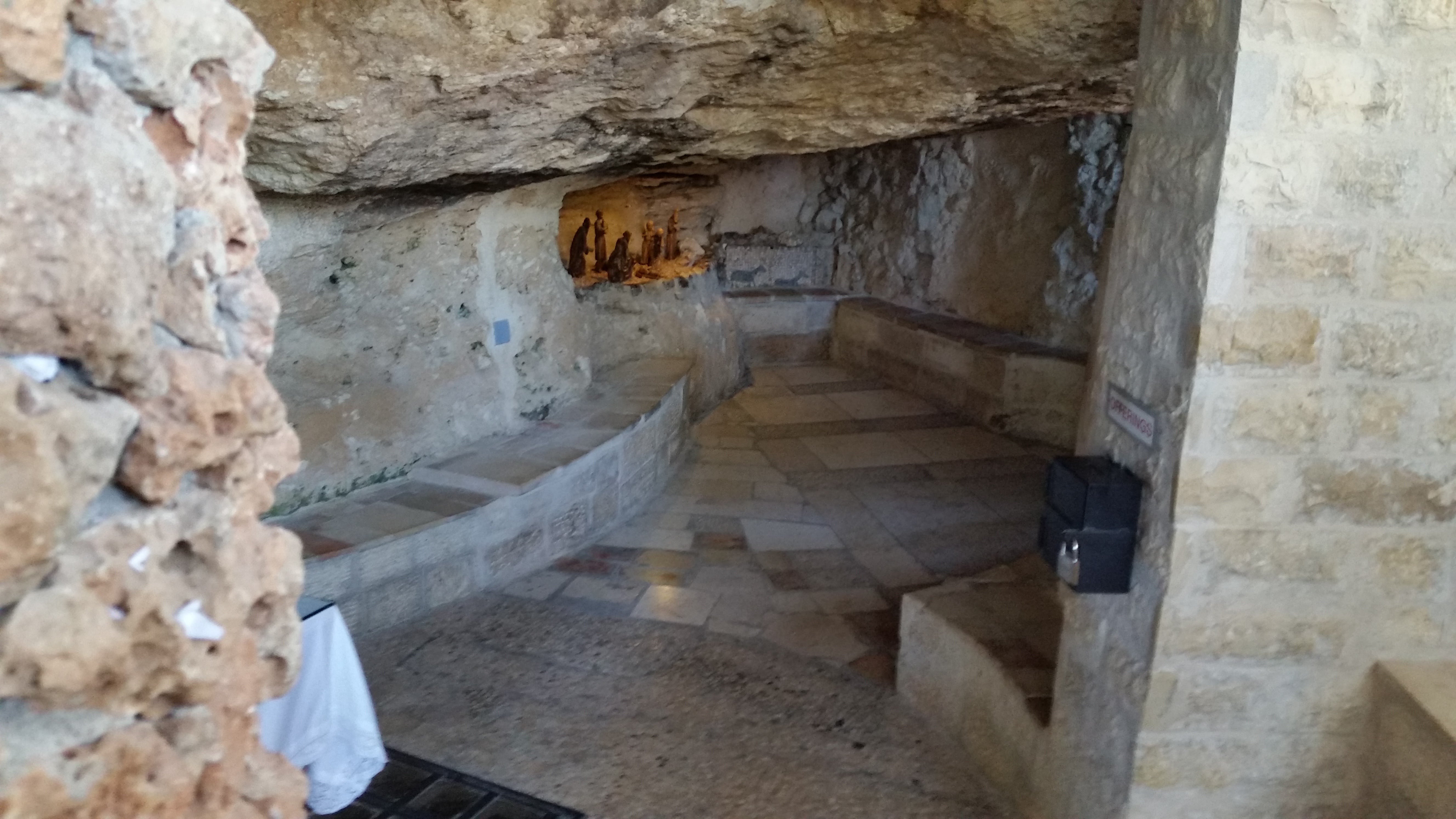 Mark M. led our devotional as we sat looking into the cave and resetting our mental images of Christmas night. Then, with his newly-purchased wooden shepherds’ flute, Michael joined Mark in playing a familiar carol while we sang:

Even though this afternoon we were not far, far away at all, and realizing that the Judean countryside comprises many more hills than plains, we could still imagine the impression the angels’ announcement must have made on those shepherds long ago, and their excitement as they hurried into the city of David to see the newborn Savior.

A shepherd with even a small flock would be hard pressed to find adequate pasture around Bethlehem today, due to a number of massive Jewish “settlements” that recently have gone up in the area. These are sizeable, self-contained cities, constructed primarily to establish a permanent Jewish presence in the West Bank and prevent Palestinians from wresting control of the land. Various Zionist organizations provide funds to build such settlements and then populate them with Jewish immigrants from Russia, Eastern Europe, and beyond. 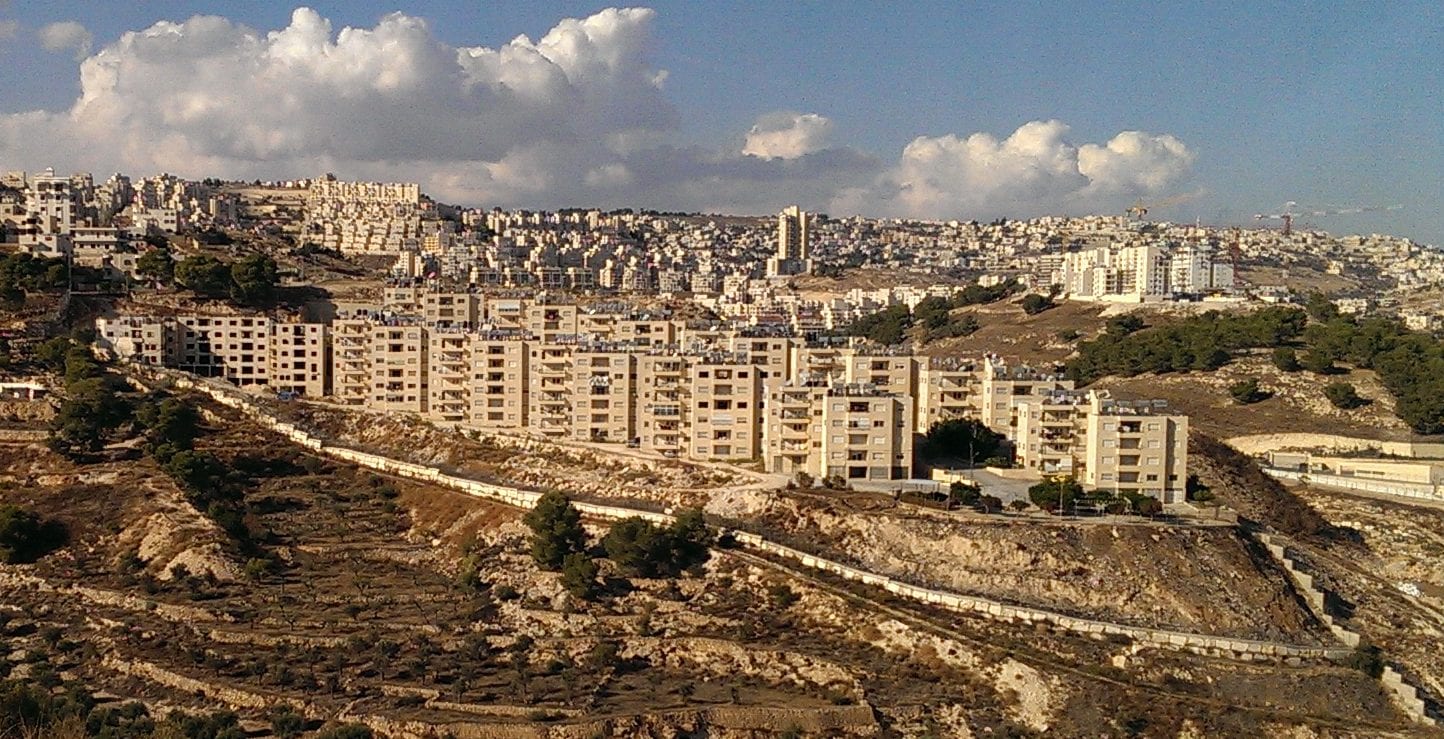 A new Jewish settlement in the West Bank near Bethlehem 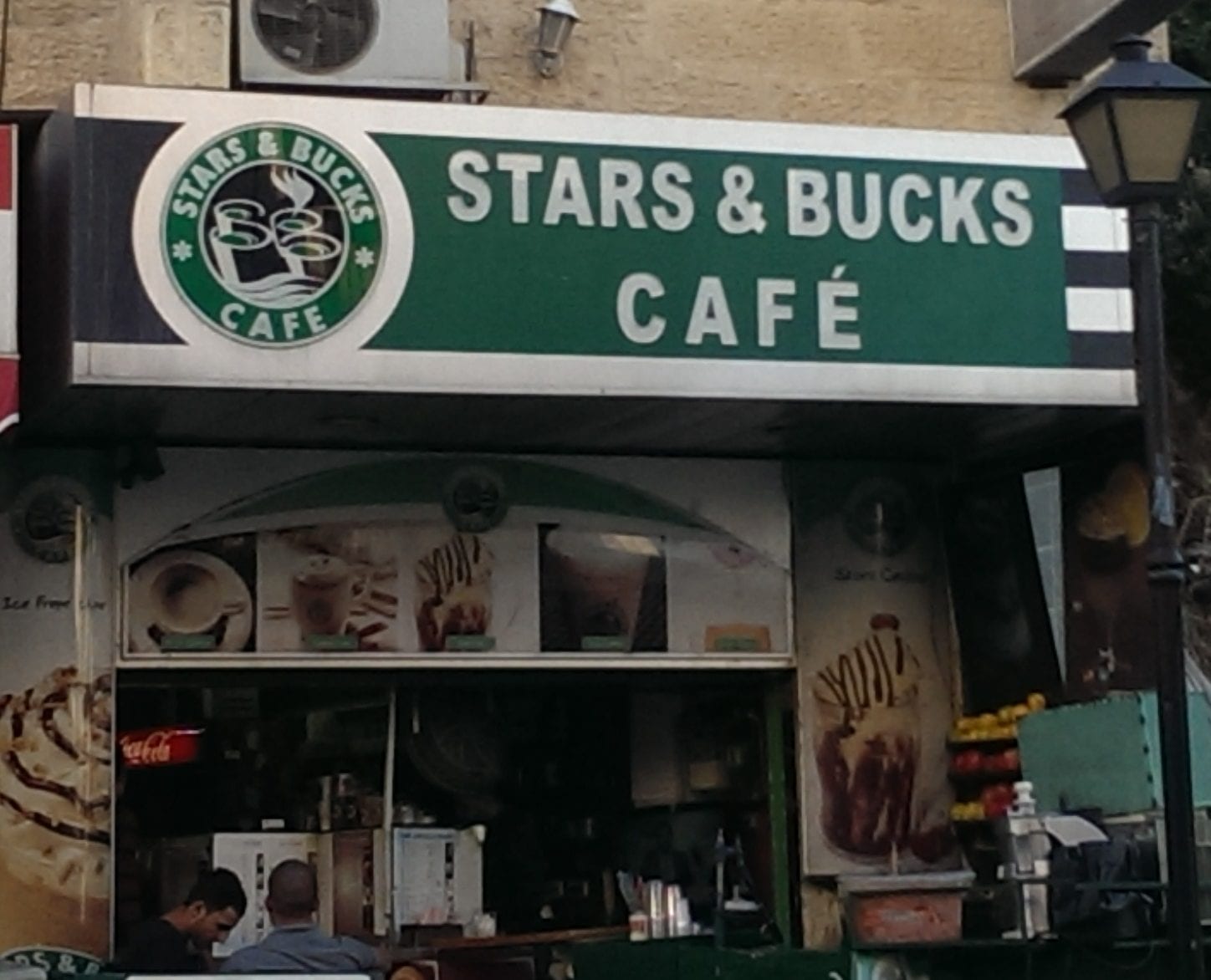 A Starbucks knockoff in Bethlehem

Outside the Jewish settlements, residents of the West Bank are poor and public services are few. The Palestinians are obviously unhappy with the situation but are powerless to do much about it that does not involve violence (such as the recent stabbings and destruction that have kept us away from Nablus). Signs prominently posted at the boundaries between Israel proper and Palestinian territory warn people of each nation that citizens of the other are not welcome, and that entering hostile communities “is dangerous and may result in death.” Although Christian tourists are free to move across such borders, the West Bank is definitely not someplace where a non-Jew or a non-Palestinian would want to spend a lot of time. 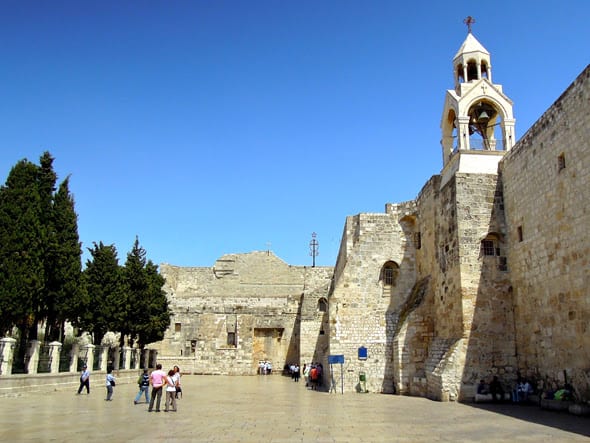 Church of the Nativity in Bethlehem 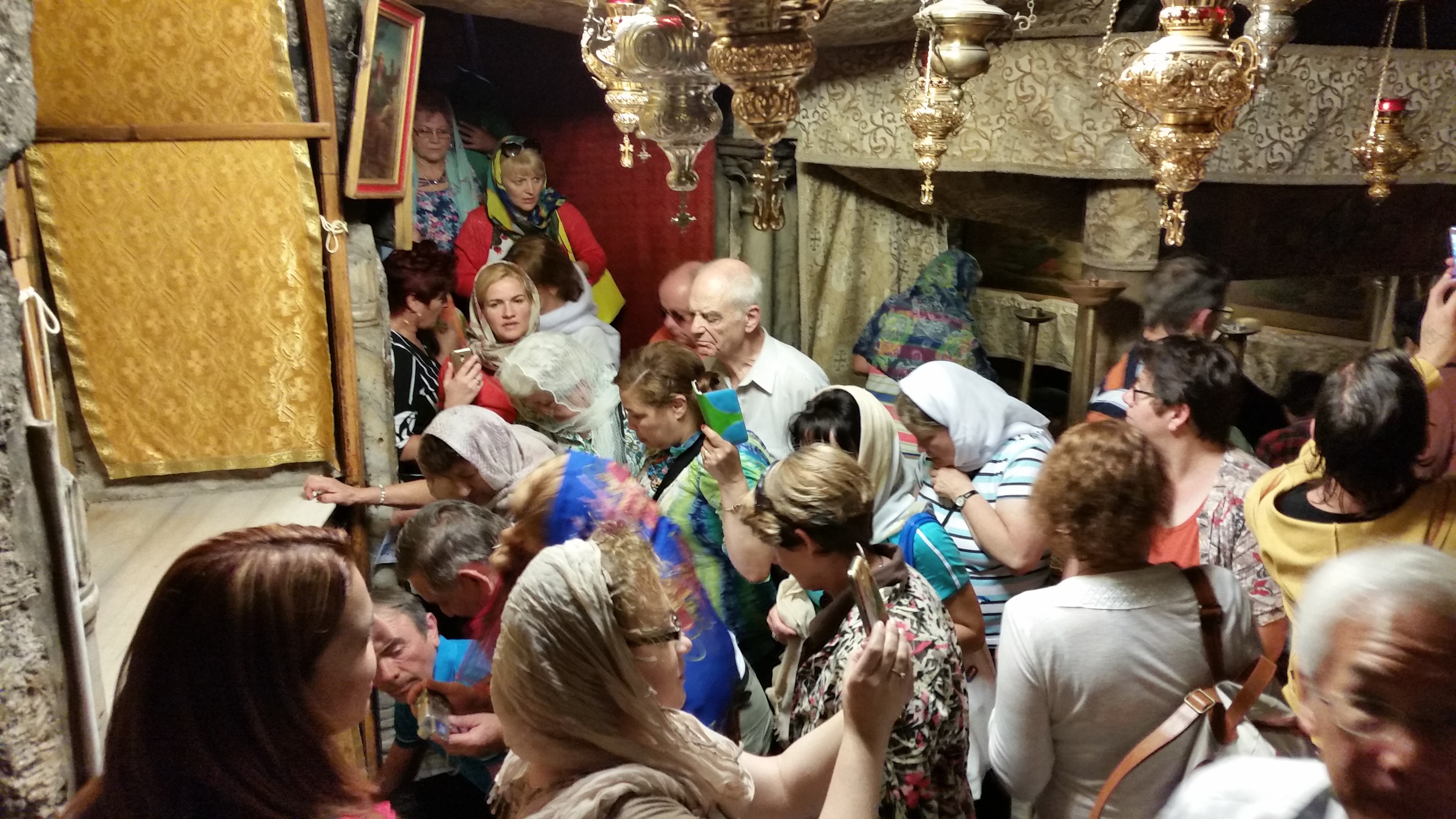 Pilgrims in the Grotto

In the center of Bethlehem, slightly removed from the barbed wire and military checkpoints, stands the Church of the Nativity. The Greek Orthodox and Armenian Apostolic churches share responsibility for taking care of the building and conducting services–and although one would think that here, of all places, Christian brotherhood should prevail, relations between the two denominations are not much more cordial than between the Jews and the Muslims. When we arrived, Greek priests kept us waiting in the transept while they finished their service, and then when we thought we finally would be allowed entry to the underground Grotto that houses the church’s main attraction, the Armenians–not to be outdone–felt the need to conduct their own rites. Much of the interior was obscured by scaffolding so there wasn’t much for us to look at, but we tried to wait patiently and not choke on the incense that filled the air. 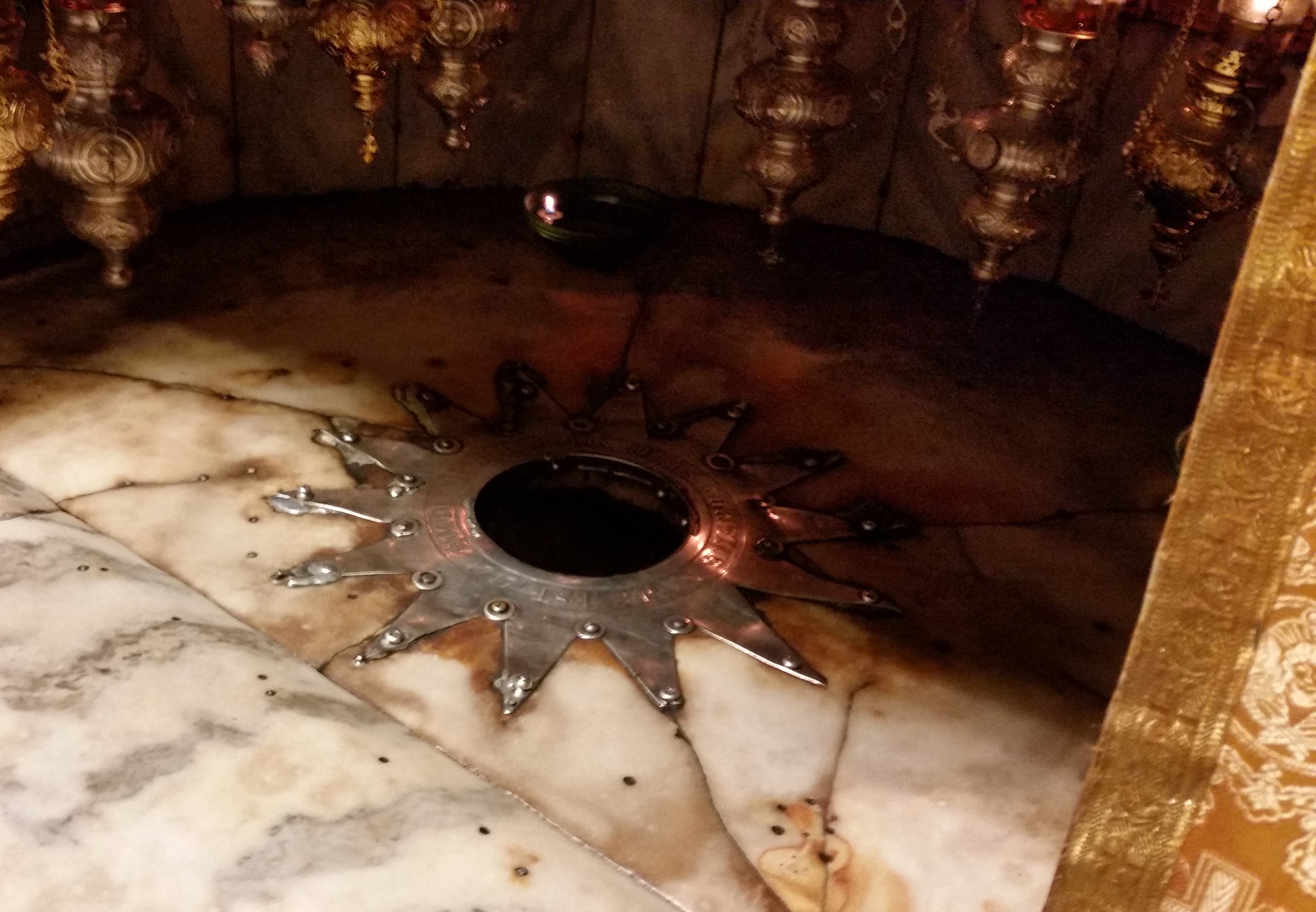 The “exact spot” of the birth 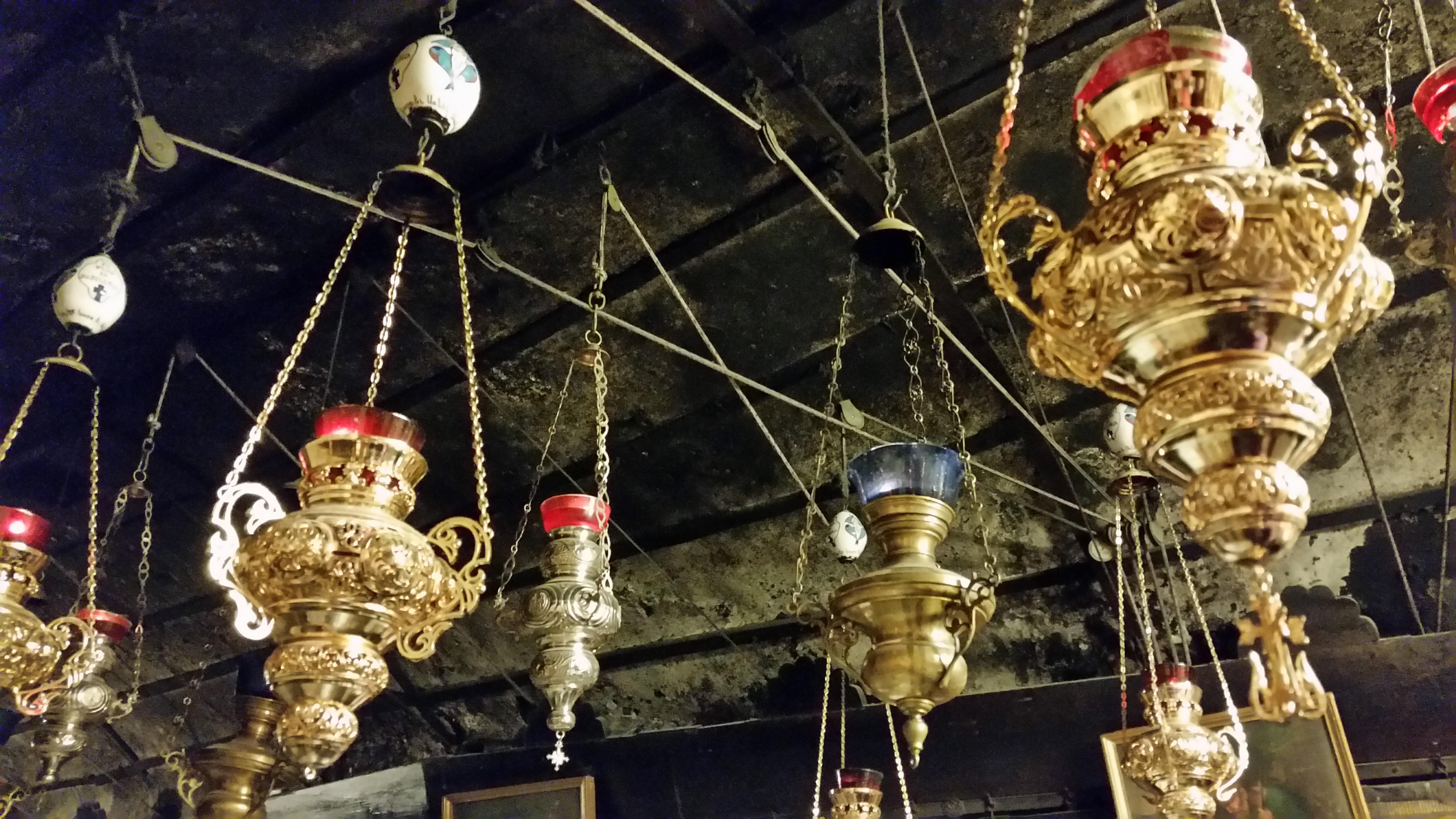 Lamps in the highly ornate church

What we and hundreds of other visitors anxiously awaited was a chance to go down into the Grotto of the Nativity and see the “exact spot” where Jesus was born. As a “low-church” Mormon who has no experience with–let alone belief in–“high-church” iconography, Michael found the experience of watching ecstatic pilgrims from Eastern Europe, Africa, and South America smother a golden floor inlay with kisses to be exceedingly strange. However, it was a good exercise in trying to understand and appreciate someone else’s religious impulses. 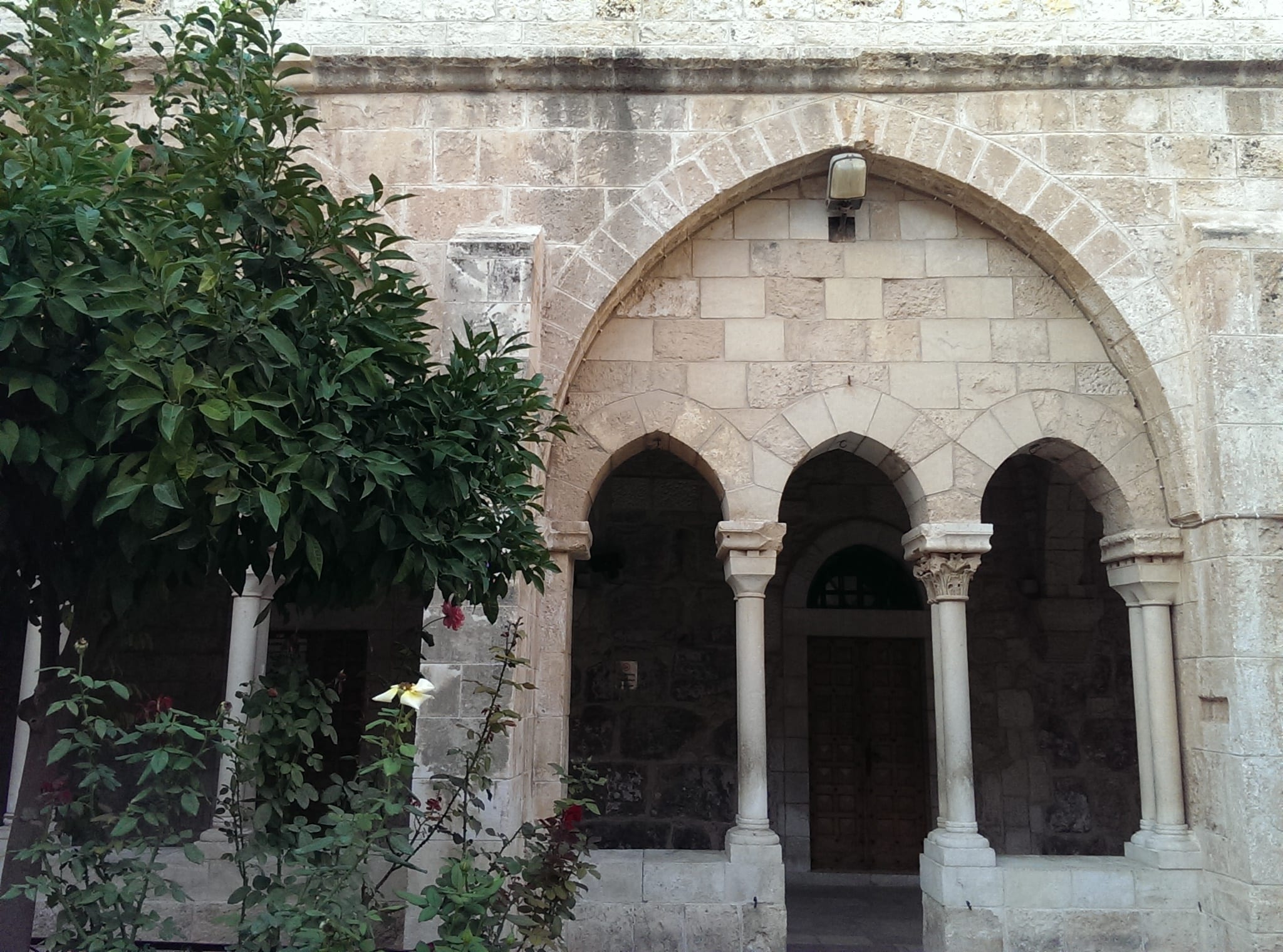 A cloister in the Franciscan convent adjacent to the Church of St. Catherine

Once upon a time, the Roman Catholics also shared custody of the Church of the Nativity with the Greeks and Armenians, but because animosity among the three groups was too real, the Franciscans decided to pull out of the fray a few years ago and now confine themselves to their own Church of Saint Catherine next door. Saint Jerome created the first Latin translation of the Bible while living in a monastery on this site during the fifth century AD. The patron saint of libraries and books, he’s buried in one of the chapels below the church. We enjoyed visiting the venues run by the Franciscans because they weren’t as crowded and the atmosphere seemed more peaceful than at the other Bethlehem sites. 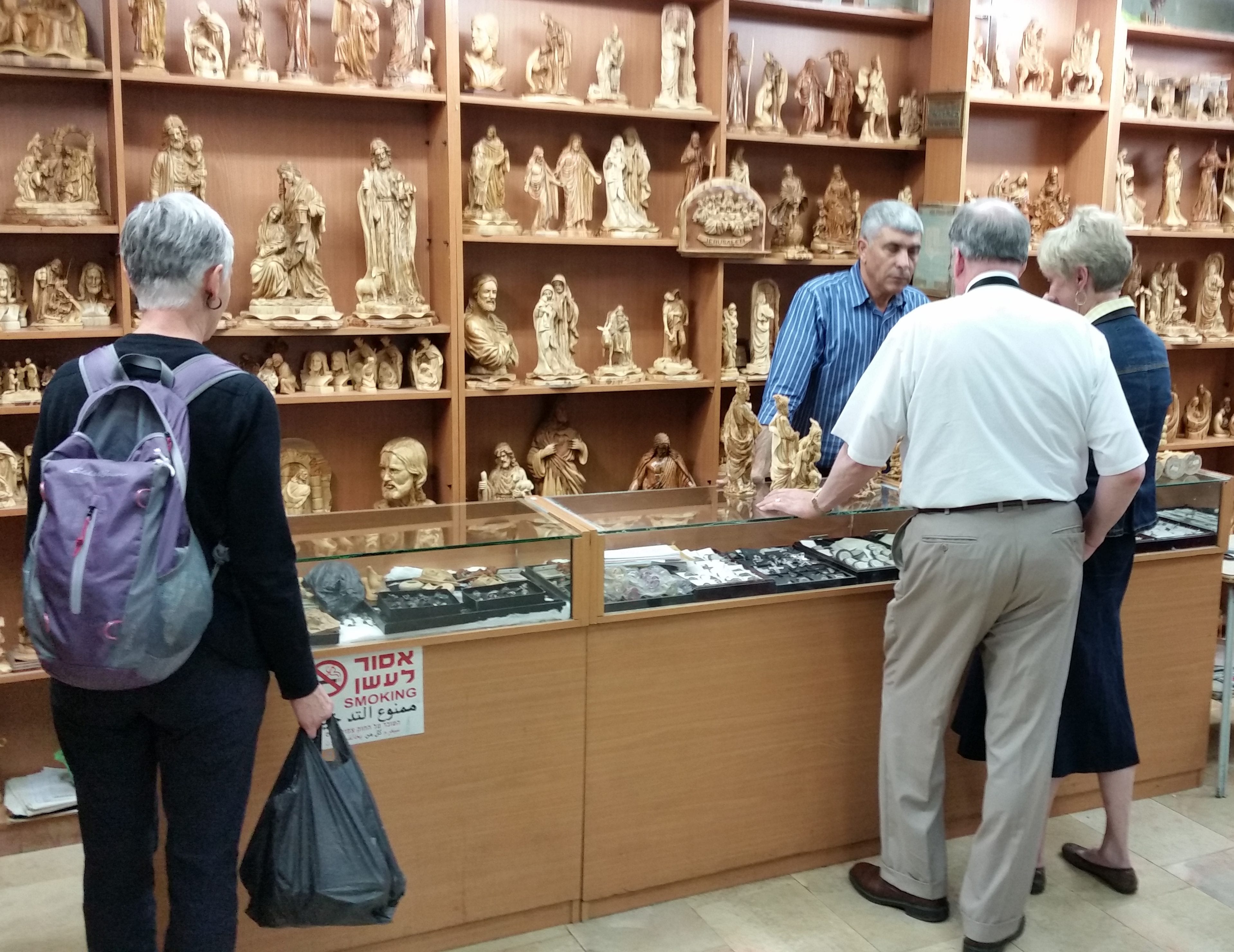 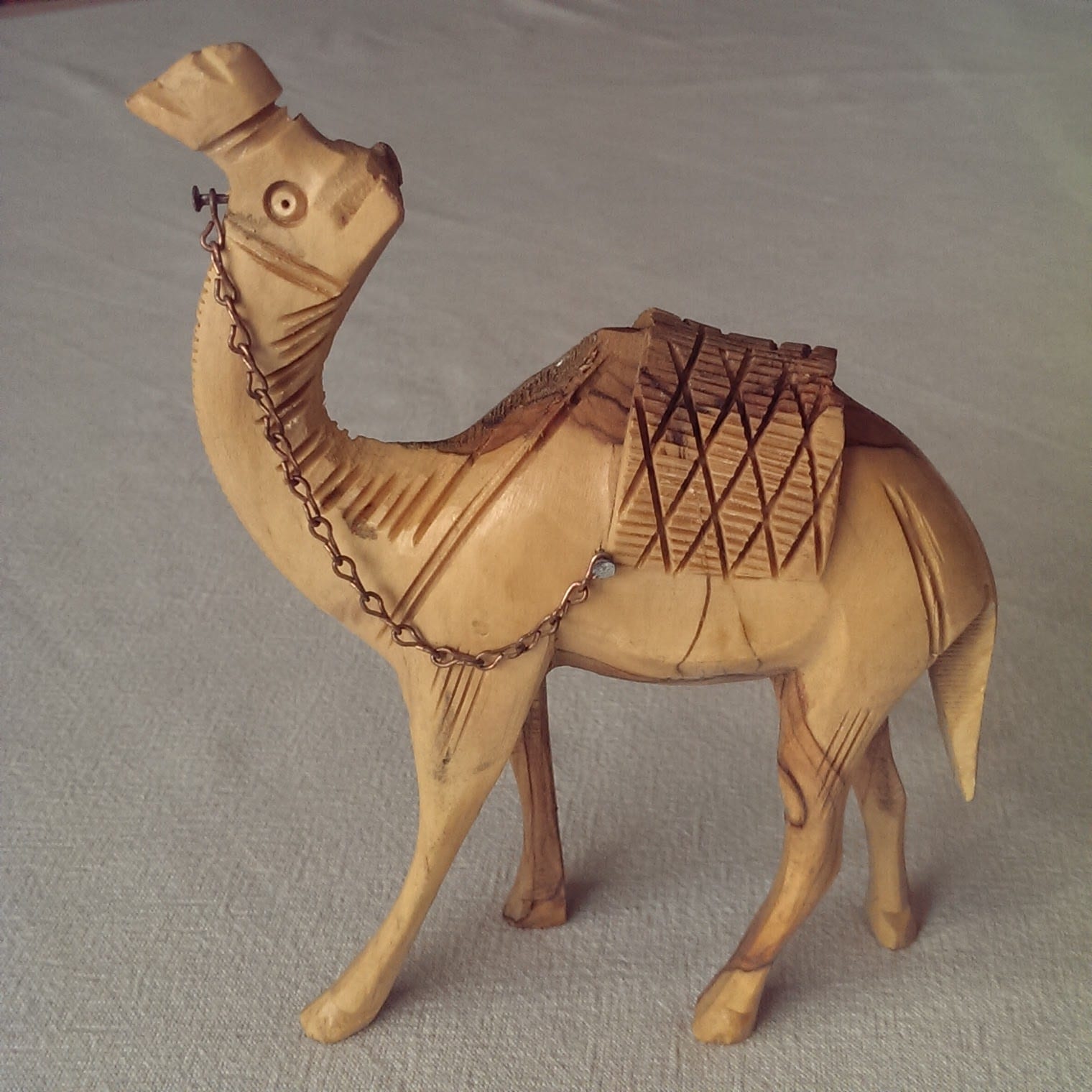 The new addition to our nativity set

After returning to Jerusalem but before going back to our home base at the Golden Walls Hotel, we made a lengthy stop at Jimmy’s Bazaar. Jimmy is another friend of Jim Gee’s who sells olivewood carvings produced by the artisans of Bethlehem at uninflated prices. Here one can find all manner of nativity sets, as well as representations of Noah’s ark, the Good Shepherd, and Jesus reaching out to Peter as they walk on the water. Because many of the LDS tour groups who visit the Holy Land also patronize Jimmy’s, his inventory includes not only biblical figures and traditional Christian symbols, but also peculiarly Mormon scenes such as Joseph Smith’s First Vision and Captain Moroni waving the Title of Liberty. Several members of our group left Jimmy’s with enough merchandise to fill an entire suitcase (and indeed, some had brought extra suitcases just for this purpose); we purchased a few gifts for our family, and a camel to add to the olivewood nativity set Nancy’s parents had brought us from Bethlehem thirty years ago.

Over dinner at the hotel (which featured stuffed artichoke hearts, among many other good things) Stephanie remarked that we had been celebrating Christmas on Halloween. We would not have traded today’s experiences for all the M&Ms and Snickers bars in the world.