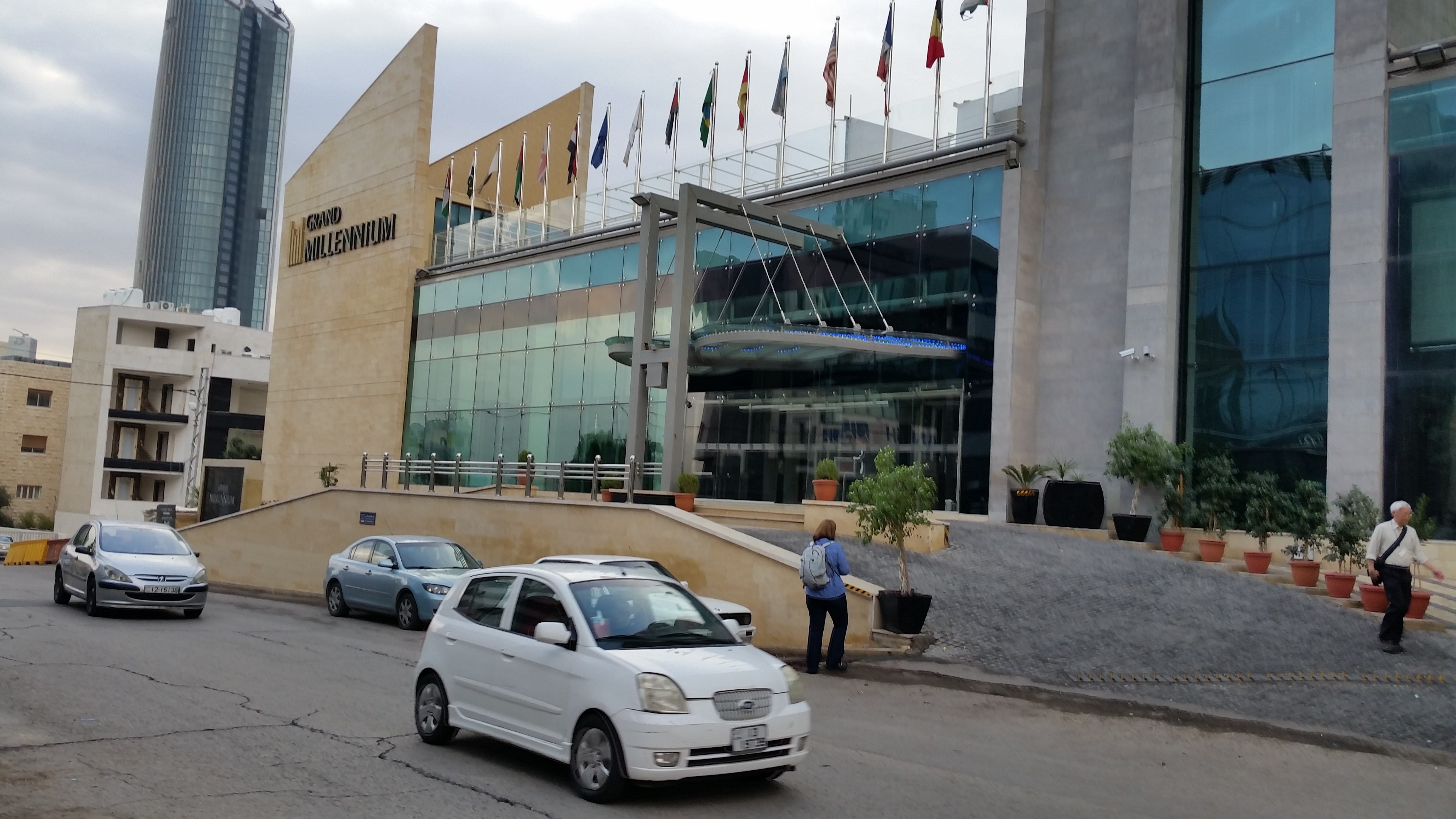 The Grand Millennium in Amman 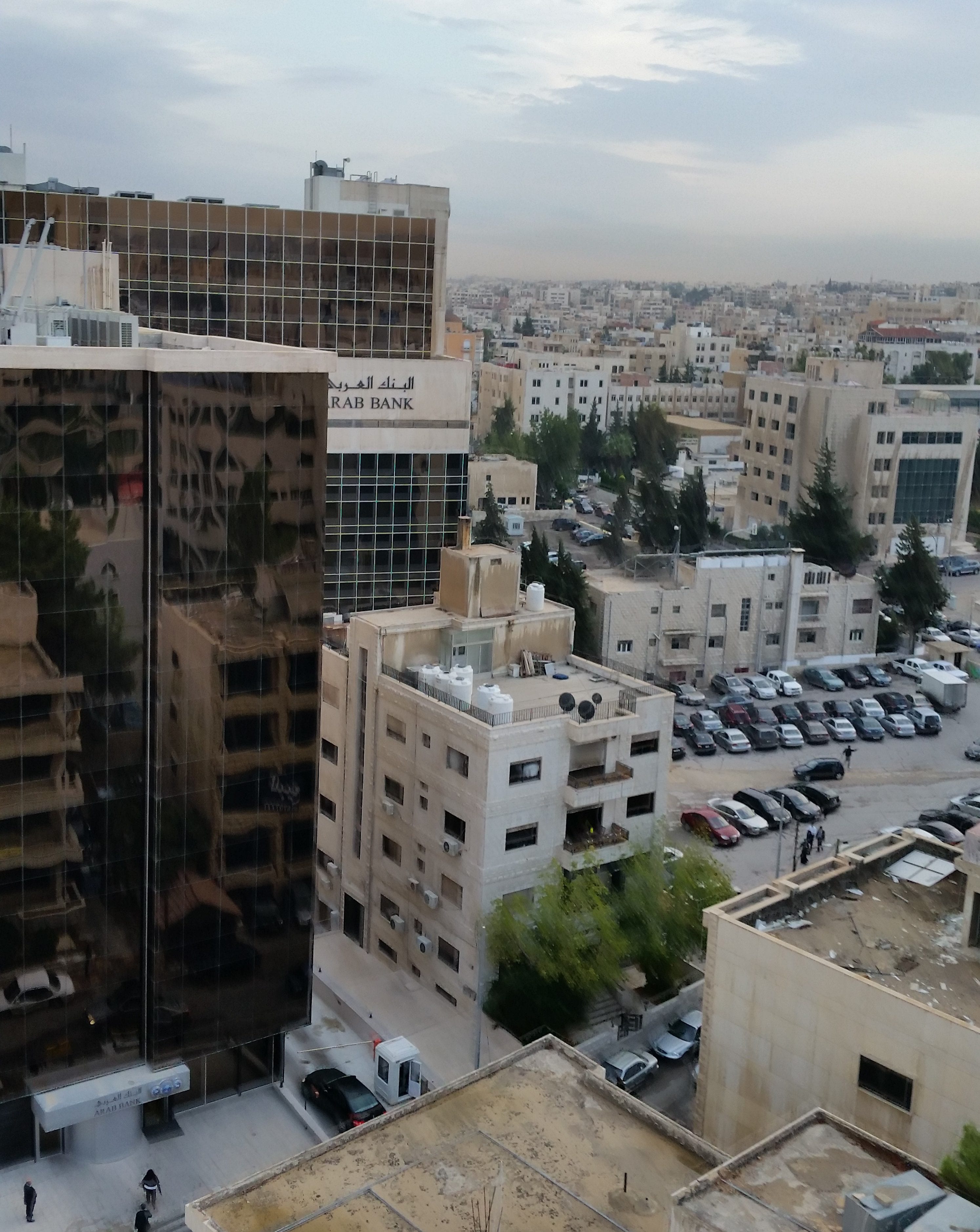 The view from our room

We thought we would be angry when the scheduled wake up call came at 6:30 this morning. It turned out that we were awake before 6. And as it turned out, we needed the extra time and could have used several more minutes because we were the last ones on the bus. Maybe it felt so nice to finally take a shower and shave that we took a little too much advantage of it. Maybe the breakfast buffet at the hotel was a little more savory than we thought it would be. Maybe it was the extra minutes it took to cross the street to take a picture of the hotel. Whatever the reason, no one complained that we were holding the group up. And it was, after all, only our first day together. We just have to make sure we haven’t set a pattern. 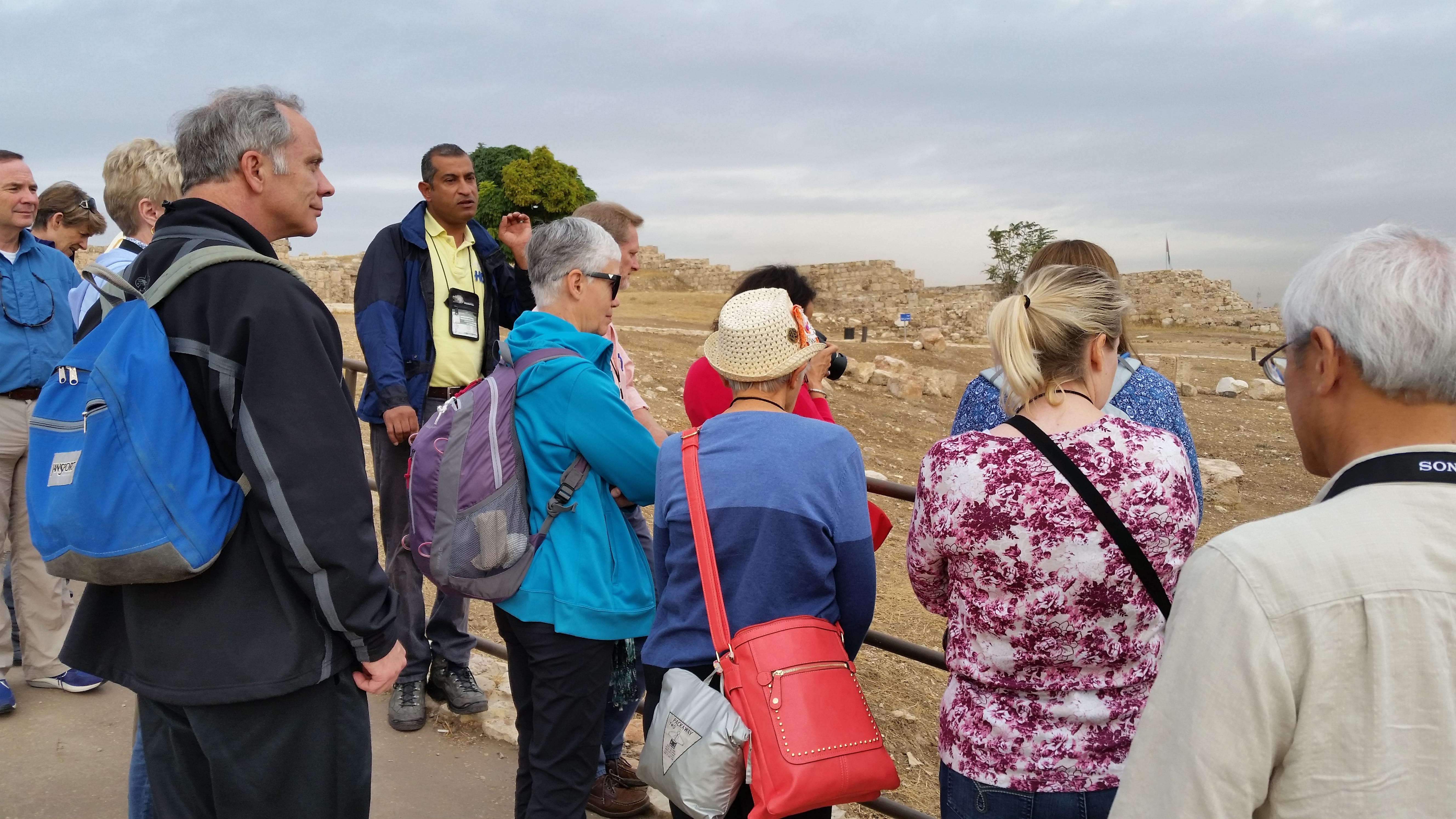 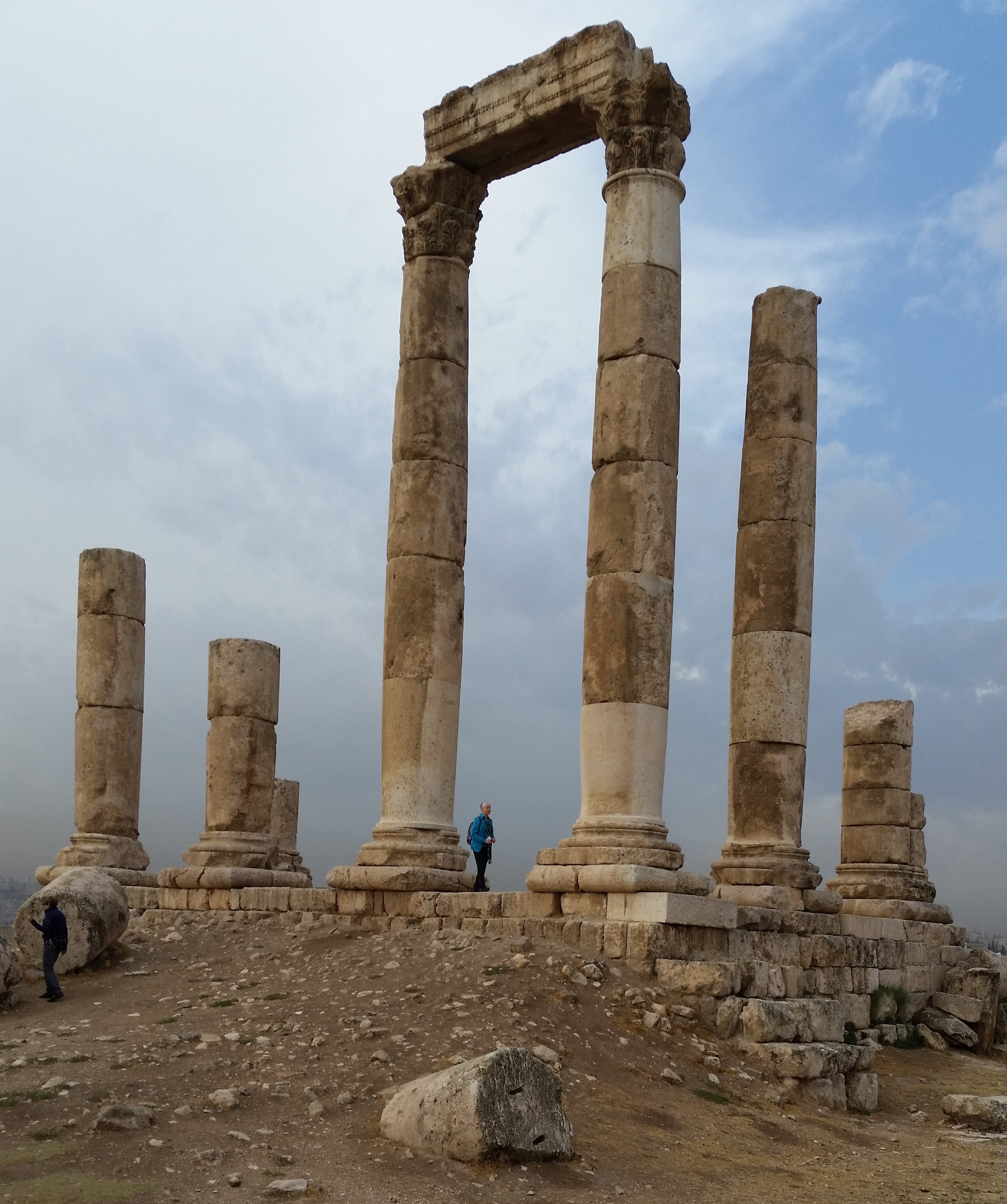 Remains of the Temple of Hercules

Our first stop of the day was at the Citadel, the ancient heart of the relatively new city of Amman. In 1919, when the European powers decided to carve the Middle East into countries with neat boundaries that had never previously existed, the little village that had begun to grow up around the ruins of the Citadel was declared the capital of Jordan. However, the site has been a strategic commercial and military center for millennia. It is located at a natural crossroads of ancient north-south and east-west trade routes, and because it is situated on a hill entirely surrounded by deep valleys, it formed an ideal natural fortress for the ancient Ammonites. Indeed, the Citadel was known to be so well defended that when King David needed to get rid of Uriah, the army officer who was inconveniently married to the beautiful Bathsheba, David sent him to lead an assault on the Ammonite stronghold, certain that Uriah would never return. After the Romans took the fortress centuries later, they added a temple in honor of Hercules–complete with a gigantic statue of their mythological hero. They called the city Philadelphia. 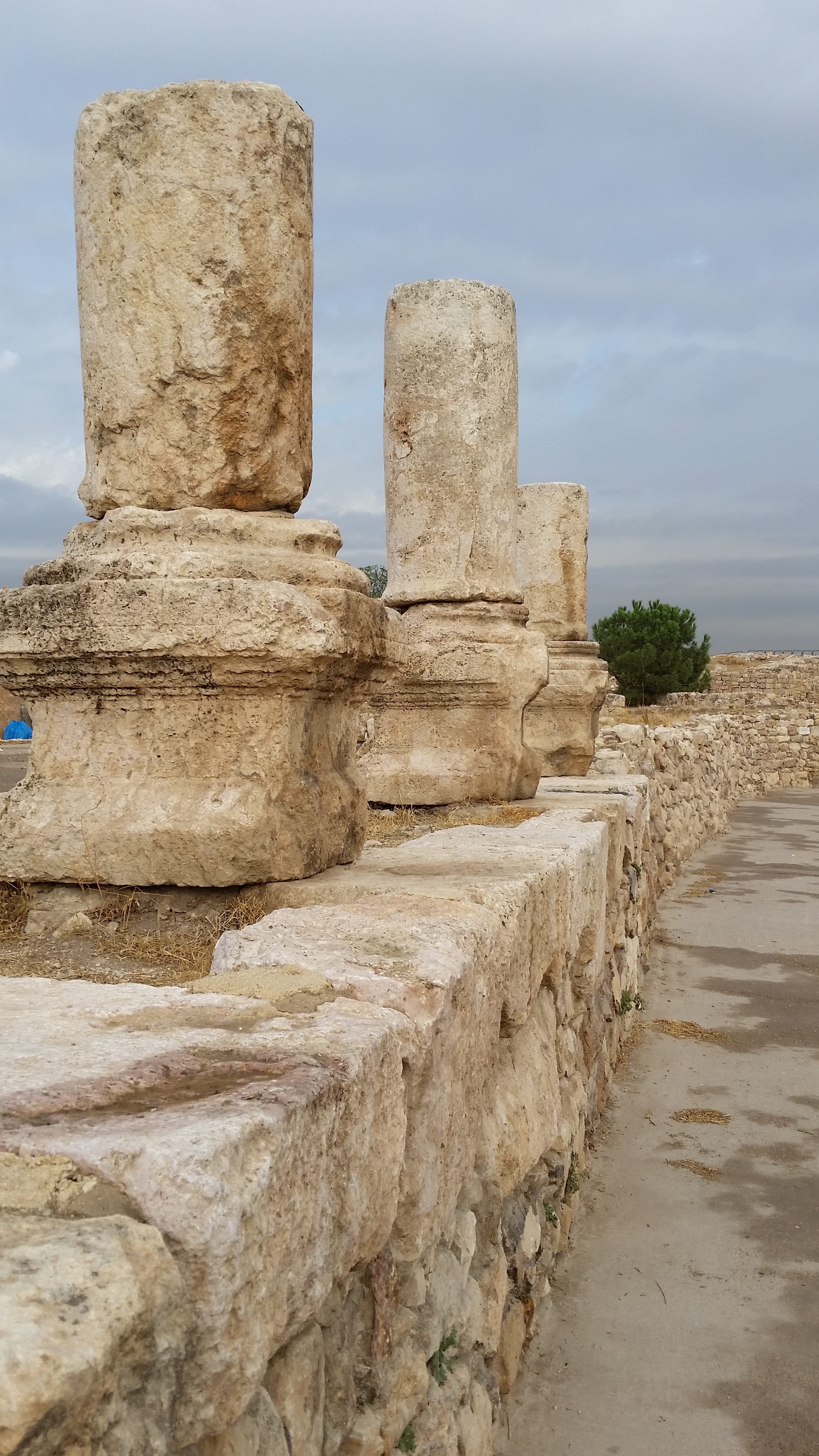 Columns from the Temple of Hercules 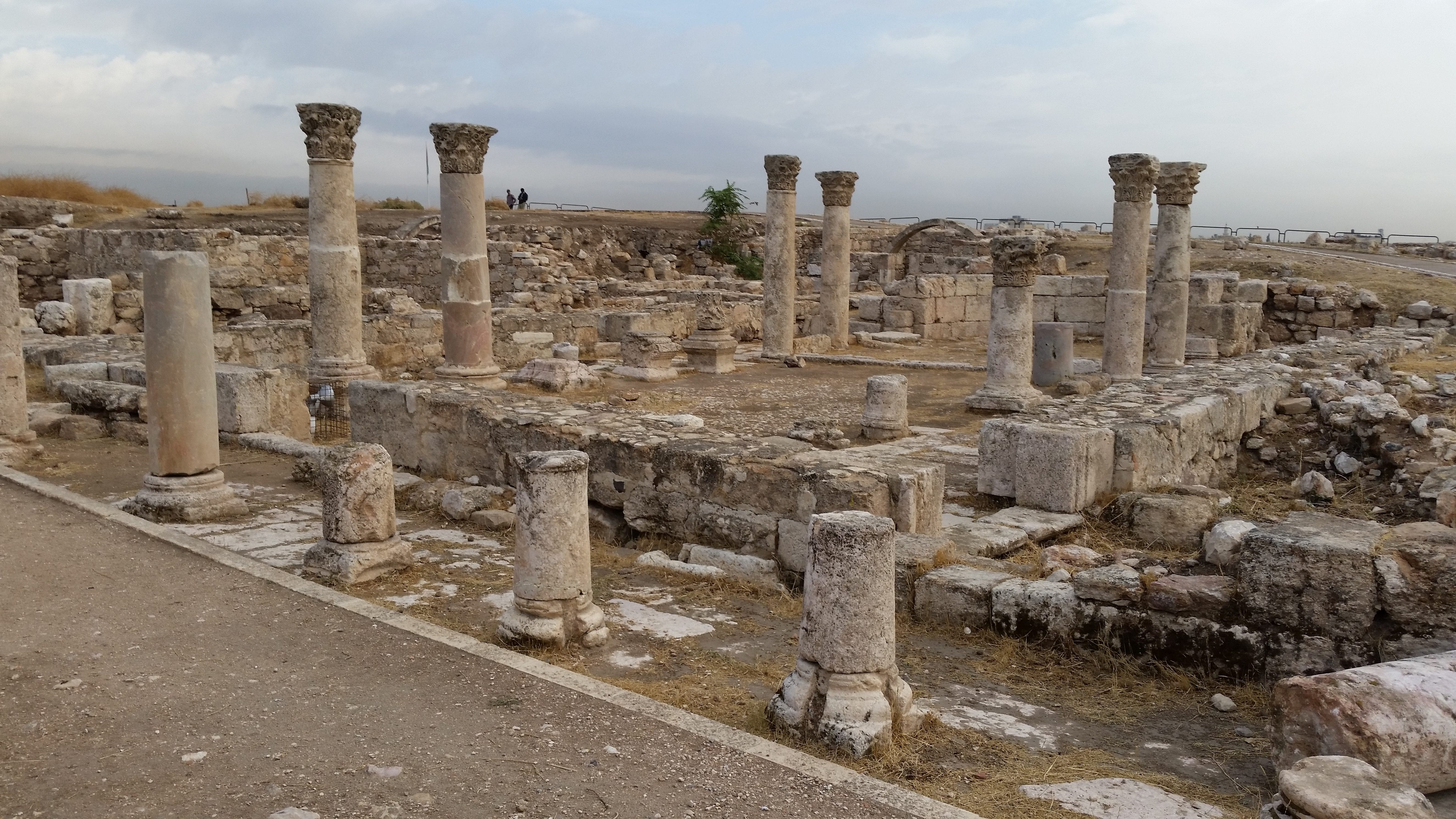 Remains of a Byzantine church 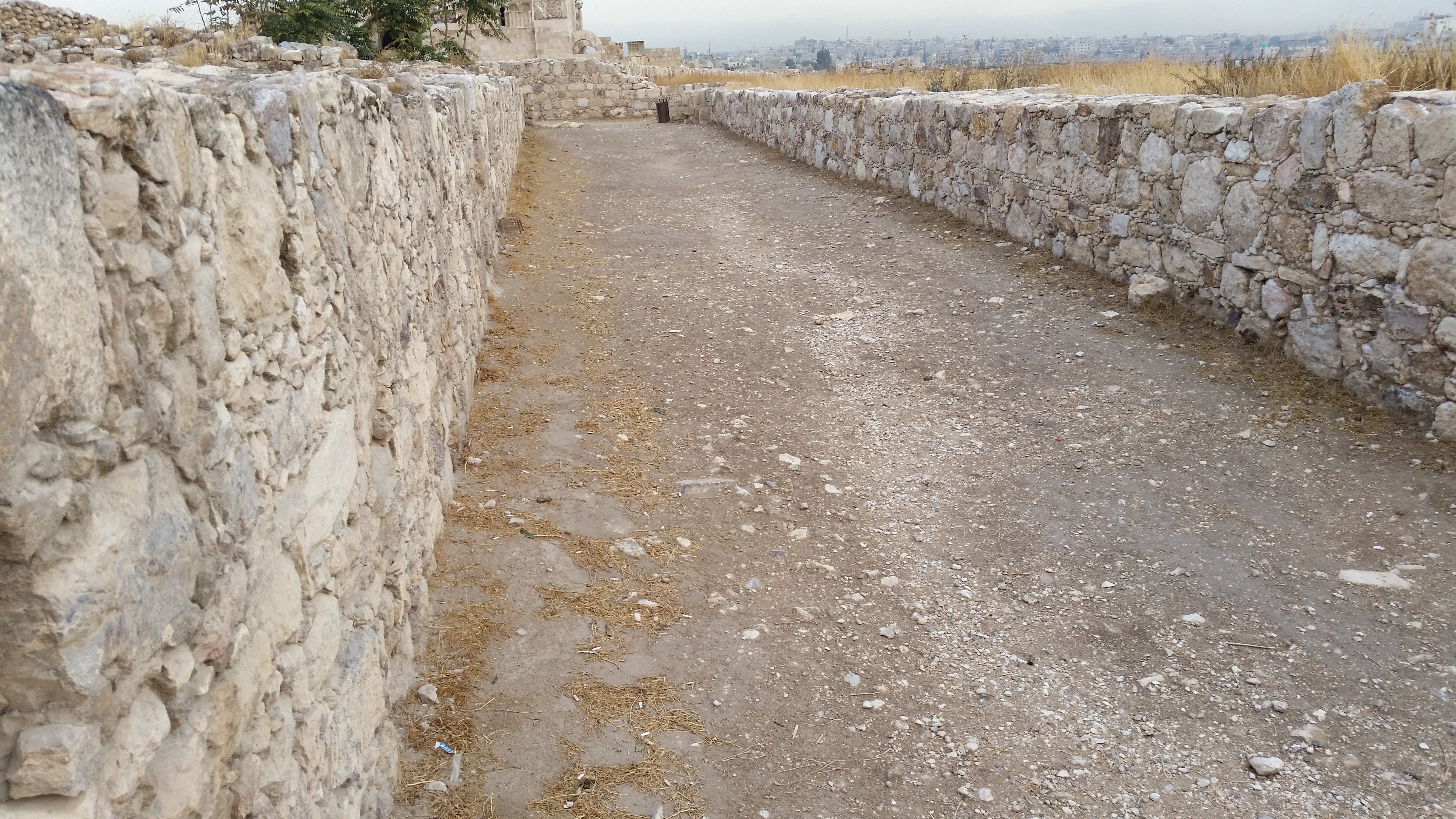 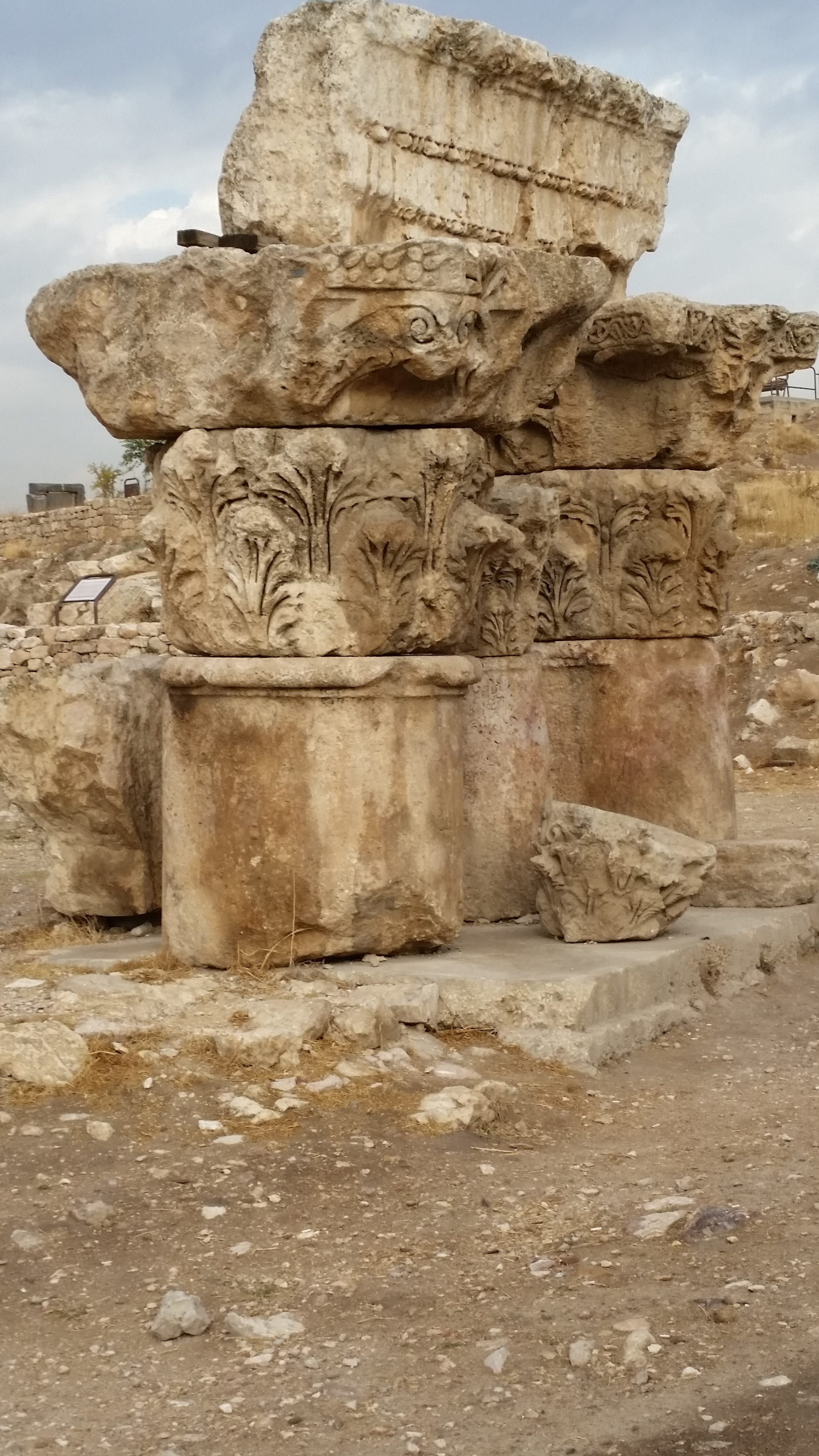 Capitals from the Temple of Hercules 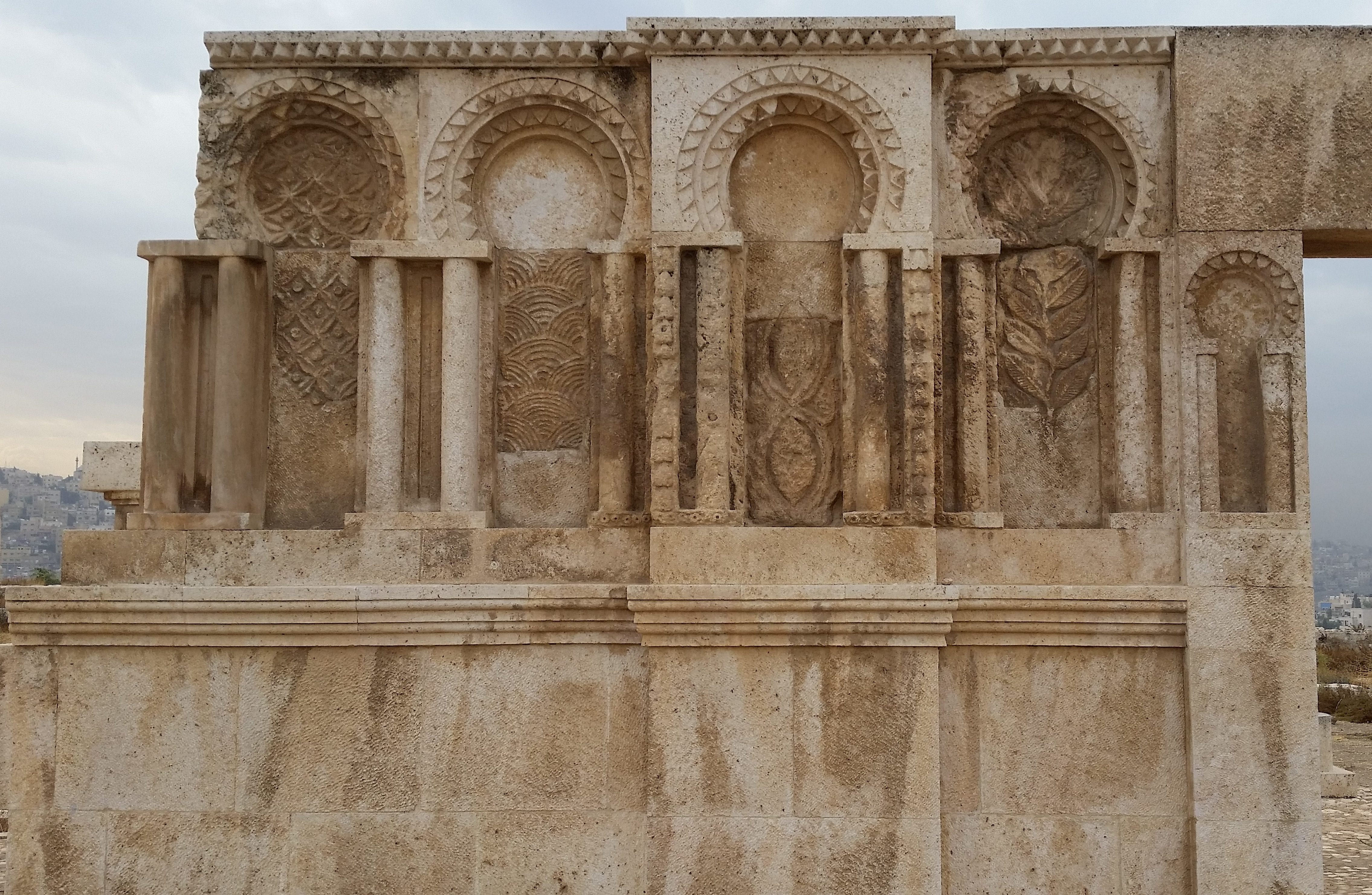 Monumental Gateway to the Palace 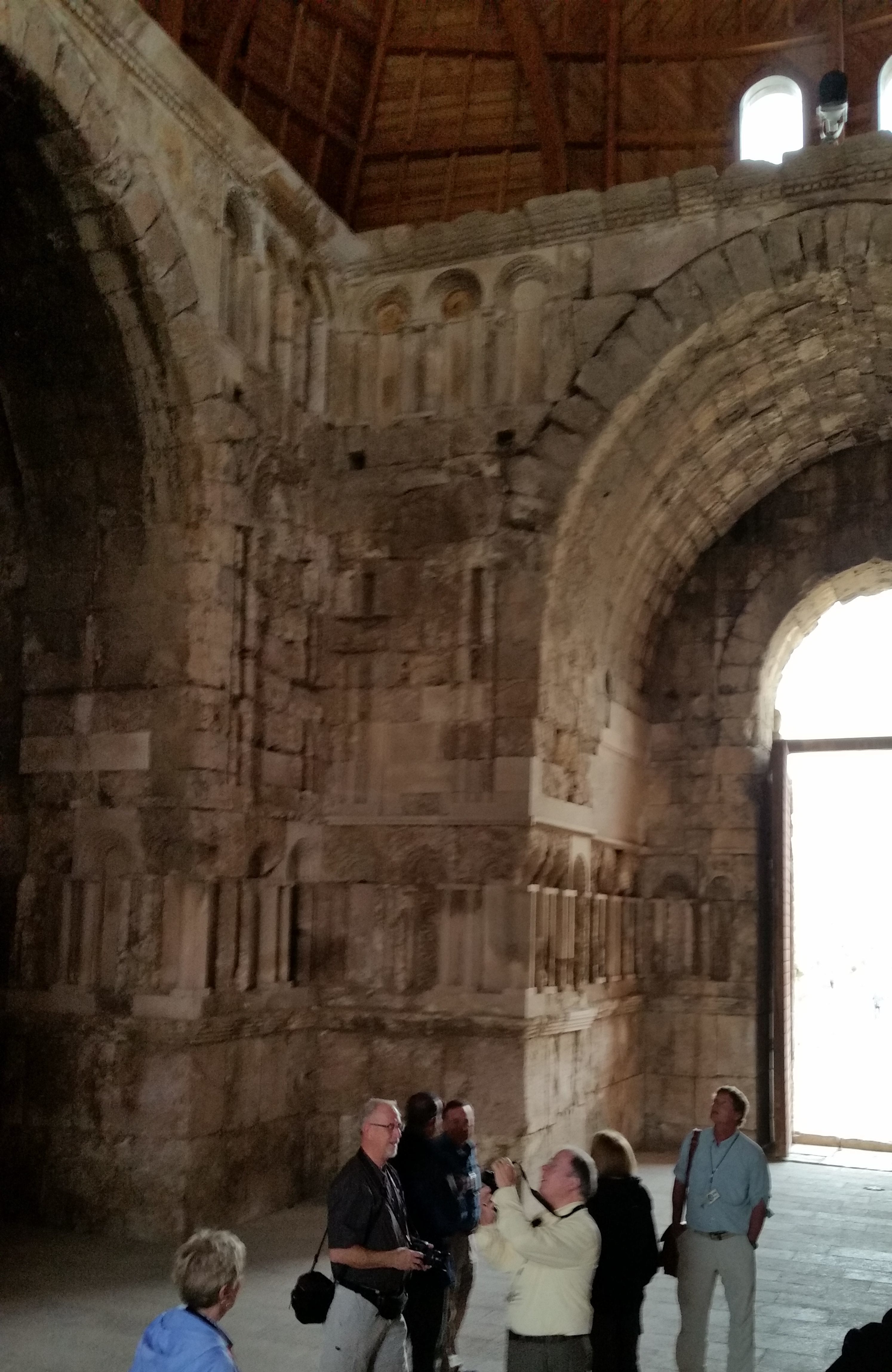 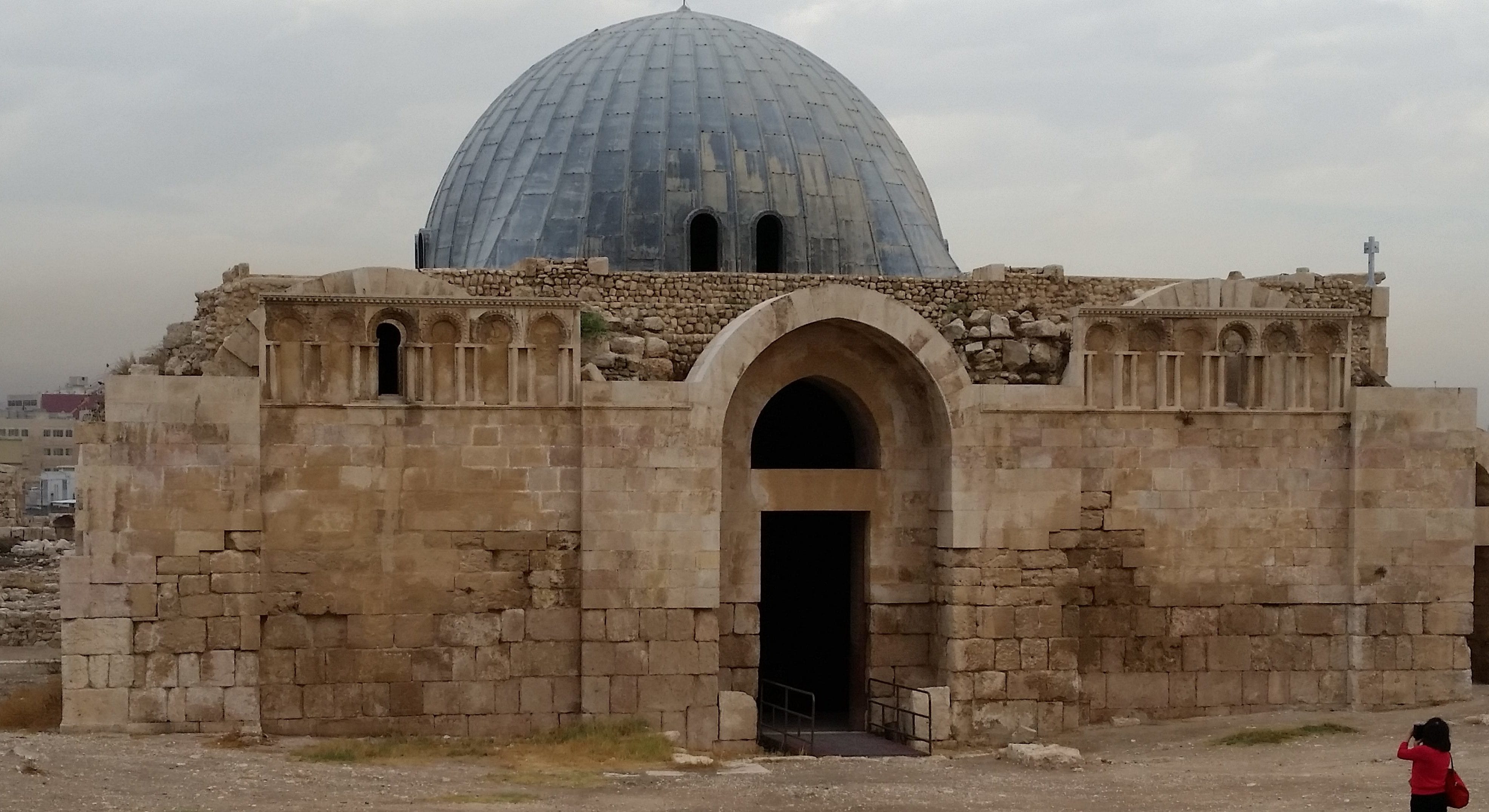 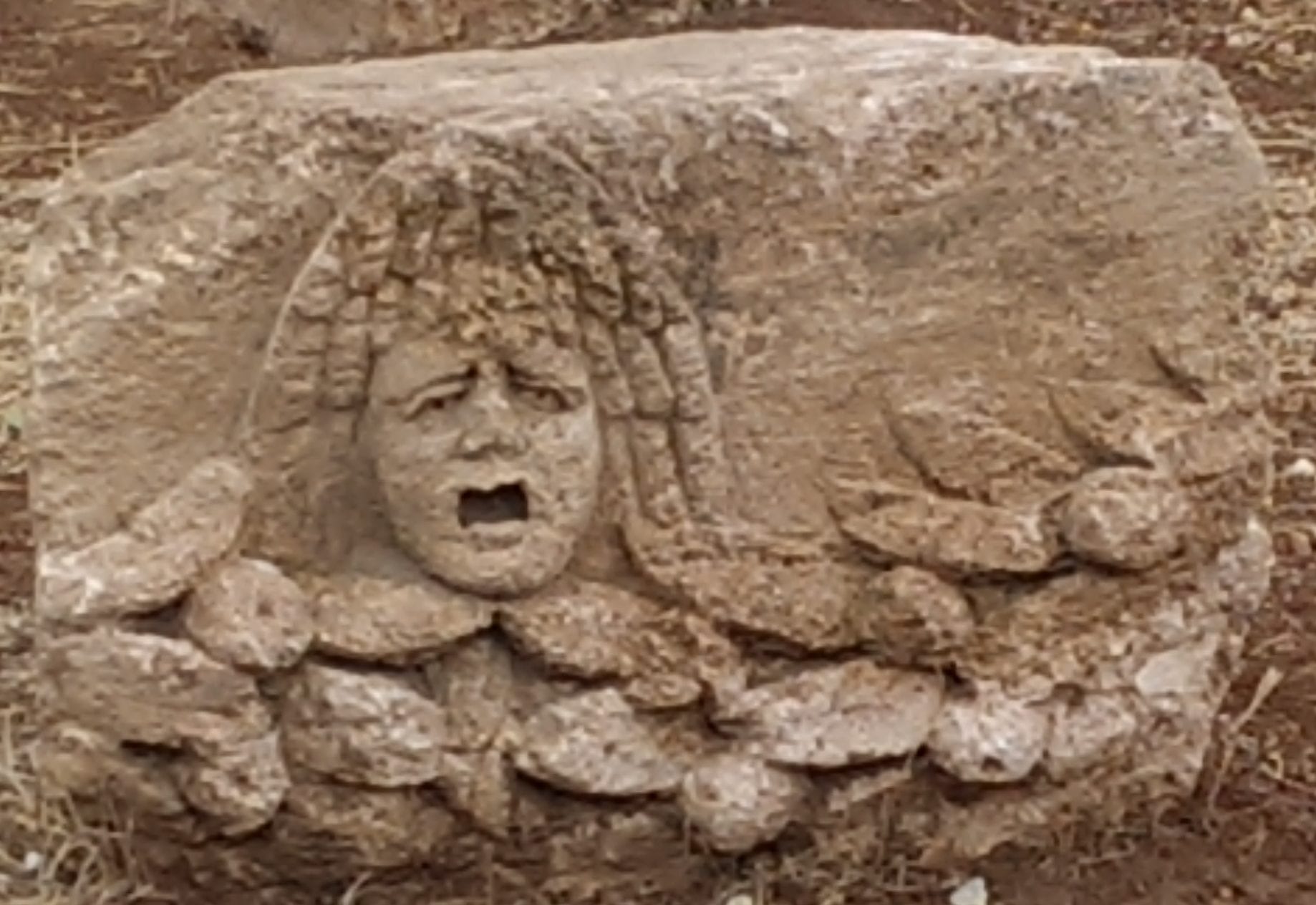 Stone face from the Temple of Hercules 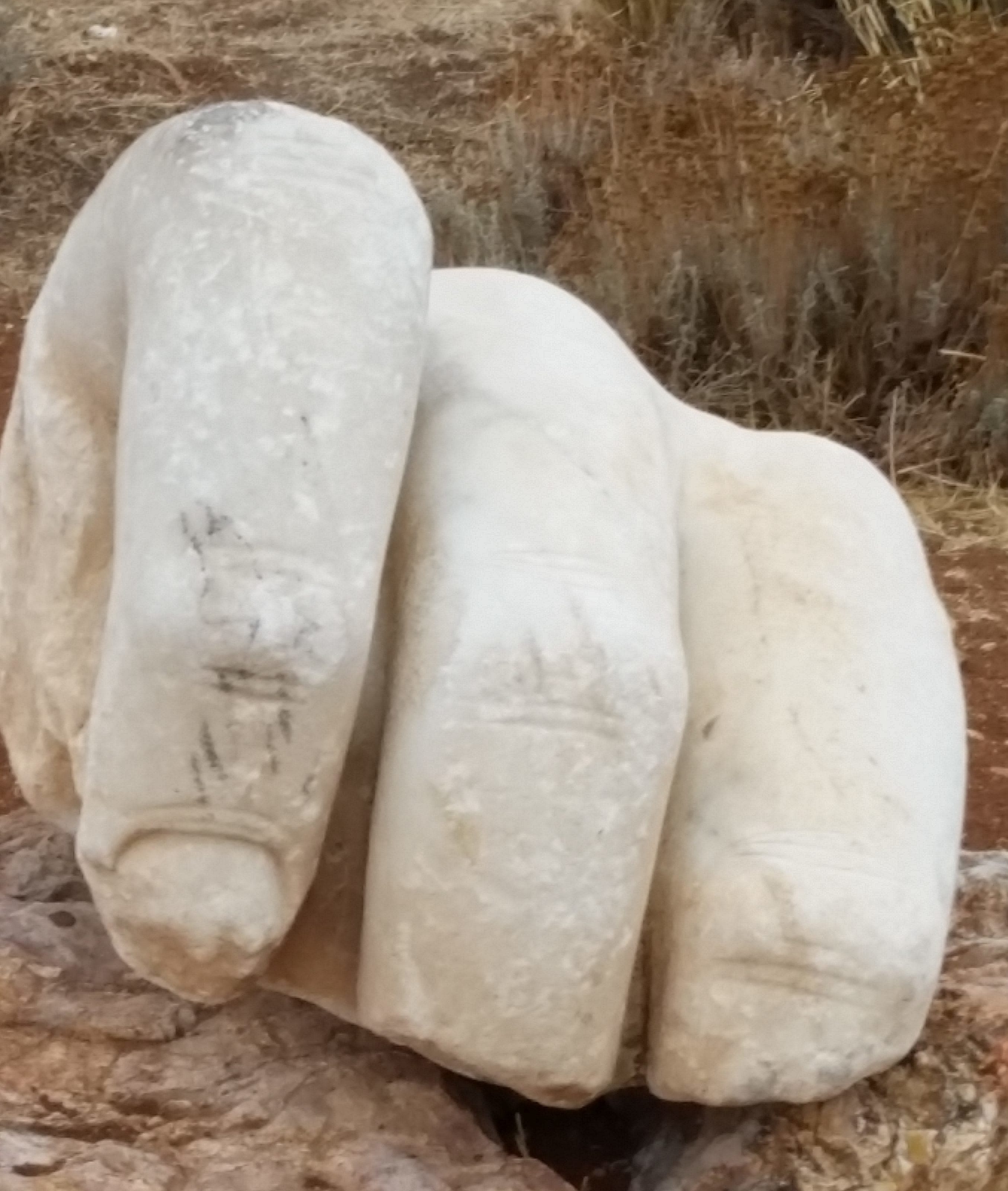 Our next stop was the 7000-seat Roman amphitheater, built across the valley from the Citadel in the same era as the Temple of Hercules. It had begun to sprinkle as we were boarding our bus to leave the Citadel, but by the time we had crawled through traffic to the amphitheater (at least twenty minutes to cover the half-mile distance), rain was creating raging waterfalls that poured down the amphitheater’s steps and into a virtual lake on the stage. The Roman architects were astute enough to have installed a drainage system, but the rain was coming down so hard that the drains had trouble keeping up. Despite the deluge, most of us got off the bus to take a quick look at the site, which remains in use today as an entertainment venue. Nearby is the Romans’ oratorium, a 500-seat civic building which also still is used for political events.

Looking south to the Dead Sea from Mount Nebo

The rain subsided somewhat as we left Amman, passing the Syrian embassy again; today its courtyard was crowded with refugees. As we drove toward Mount Nebo, we got a good look at some more typical Jordanian neighborhoods. One of the first things we noticed is that many, many of the limestone block houses (virtually every structure here is built of stone) appeared to have unfinished second stories, with rebar sticking out of the topmost blocks. Zaid, our Jordanian guide, explained that there are two reasons for this: First, those unfinished upper stories are “for the next generation”; i.e., when a son marries, the family will build a house for him and his family on the second floor of his father’s house. The second reason: To avoid paying taxes, because buildings that are still under construction are not taxed. 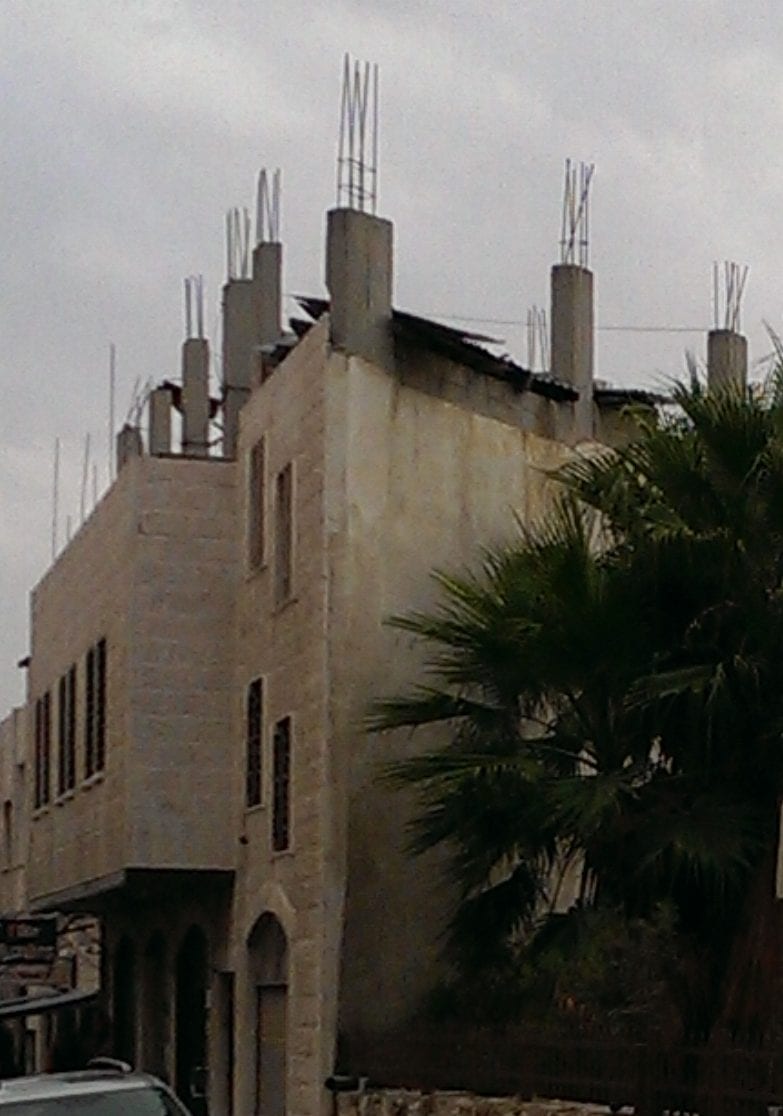 The upper stories of many Jordanian homes remain unfinished

A memorial commemorating the visit of John Paul II

Looking west to Jericho and Jerusalem 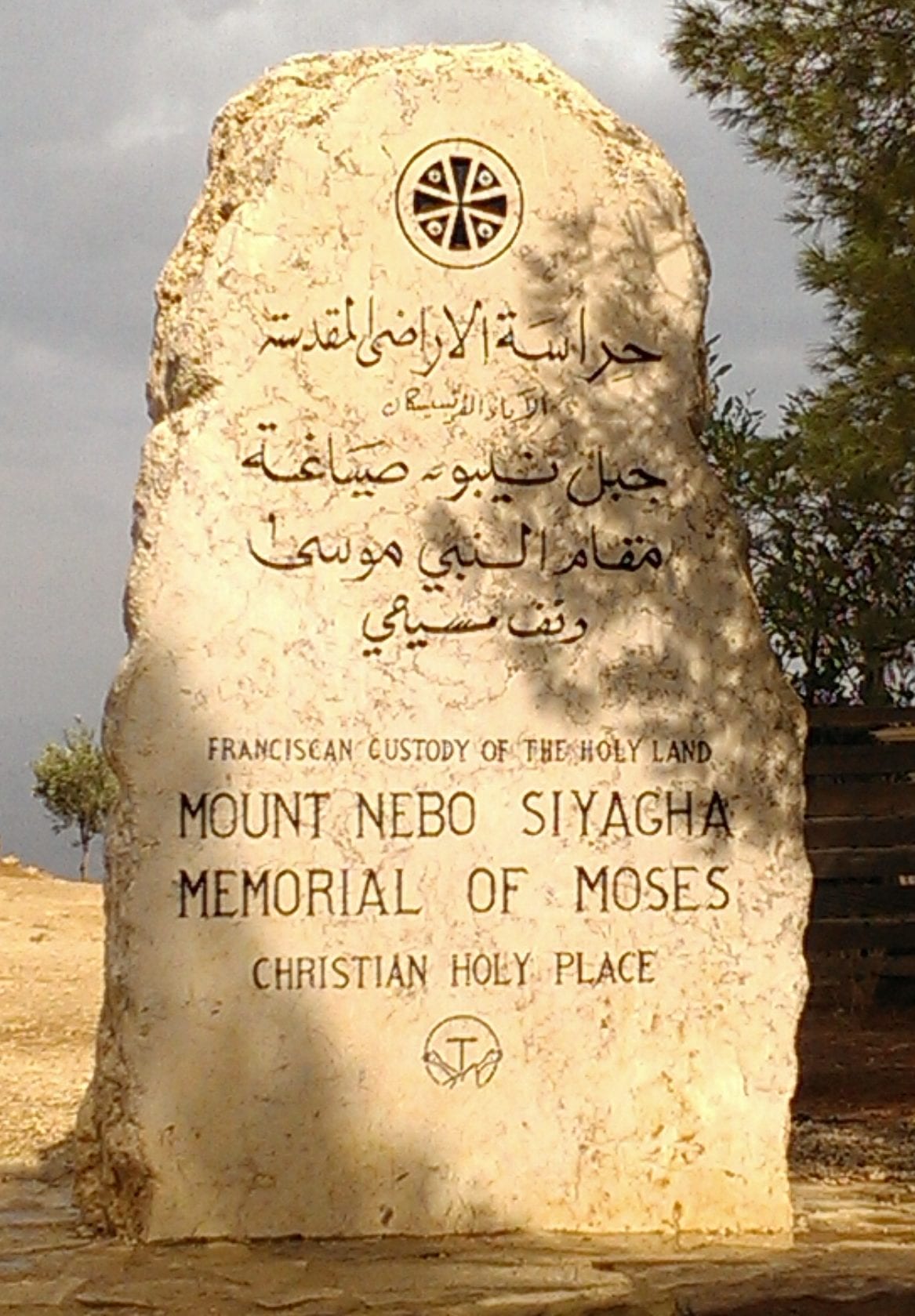 Mount Nebo is where Moses stood and surveyed the land of Canaan after wandering forty years in the wilderness with the children of Israel. Moses told the Israelites that Jehovah had promised them all the land that they could see–from Gilead in the north (now in present-day Syria) to the Dead Sea in the south–but they would need to fight for it. Joshua must have been a little overwhelmed when Moses explained that because Jehovah had forbidden him to cross the Jordan River (visible at the bottom of the valley), it would be up to Joshua to conquer the Canaanite cities on the other side. The mountain was a lot higher in elevation than we had expected, and the view of the entire valley was very impressive. 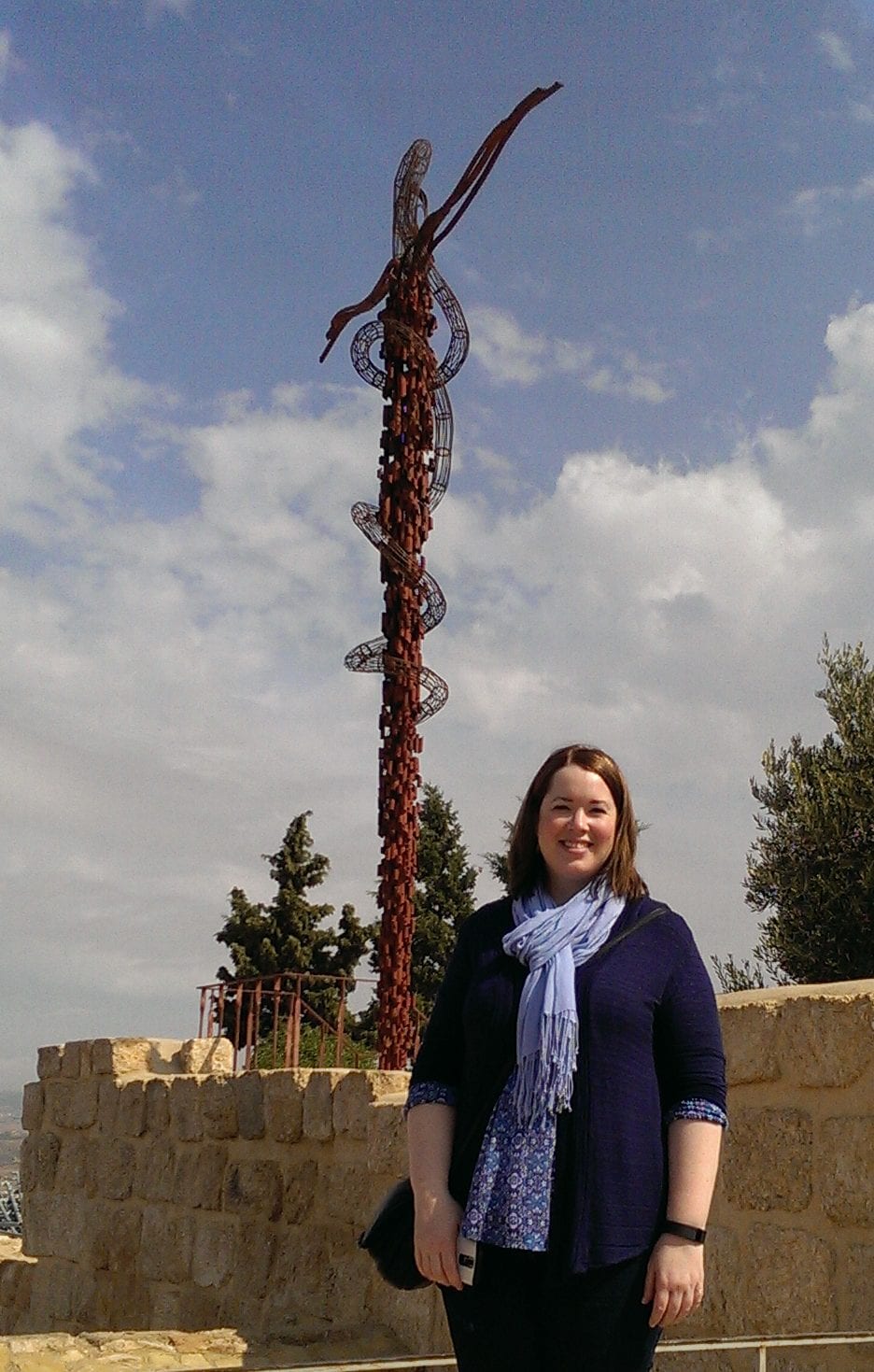 Emery under a modern interpretation of the bronze serpent God commanded Moses to create to heal the Israelites who had been afflicted by live, fiery ones 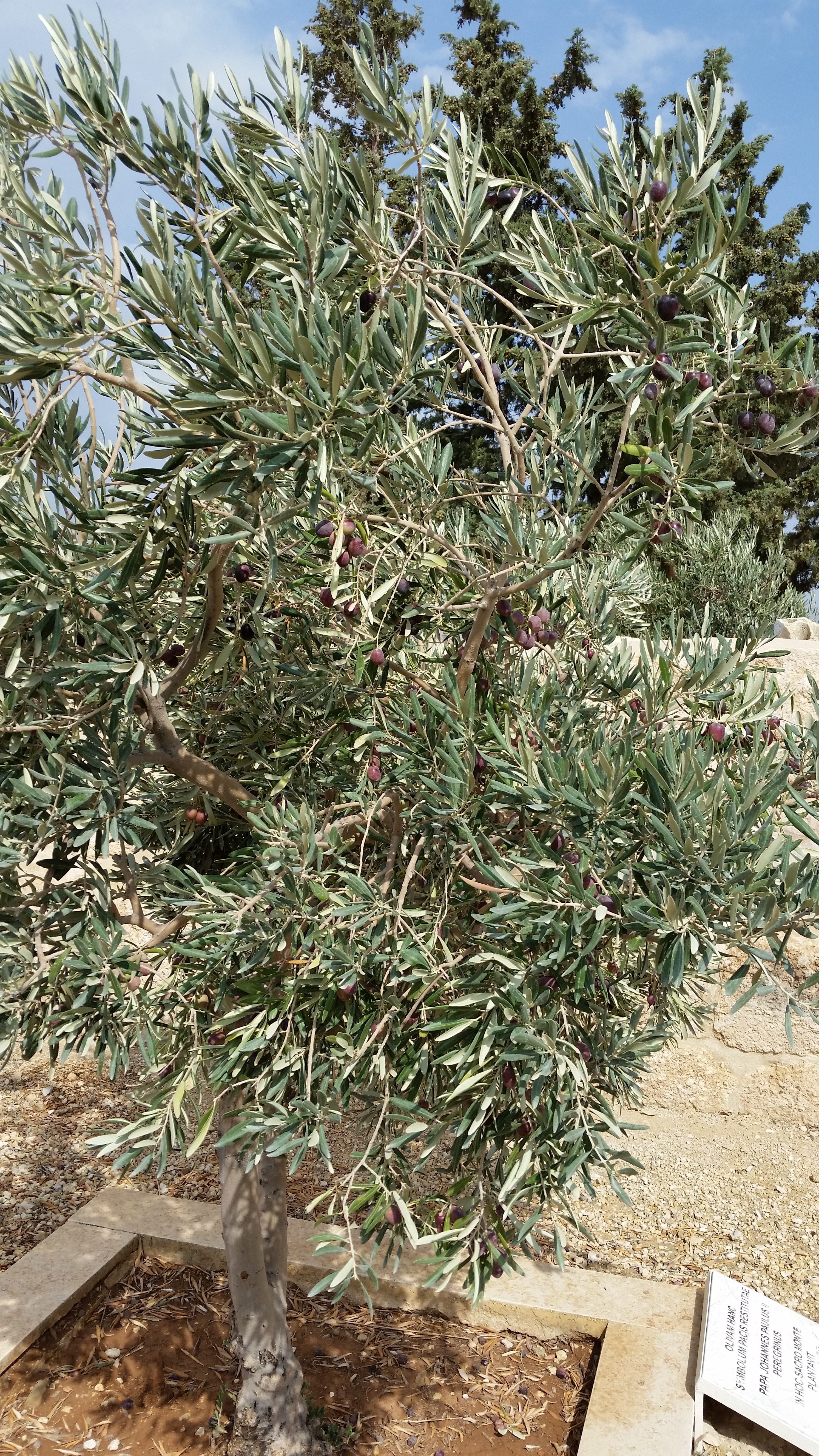 Unfortunately, the Memorial Church of Moses on Mount Nebo was closed for renovations so we could not see its mosaics, but we were able to see a modern bronze sculpture representing the brazen serpent Moses had been commanded to make to heal the Israelites who were afflicted by fiery serpents. As we climbed the hill to Moses’s lookout, we also enjoyed passing through a small grove of olive trees with fruit just beginning to ripen. 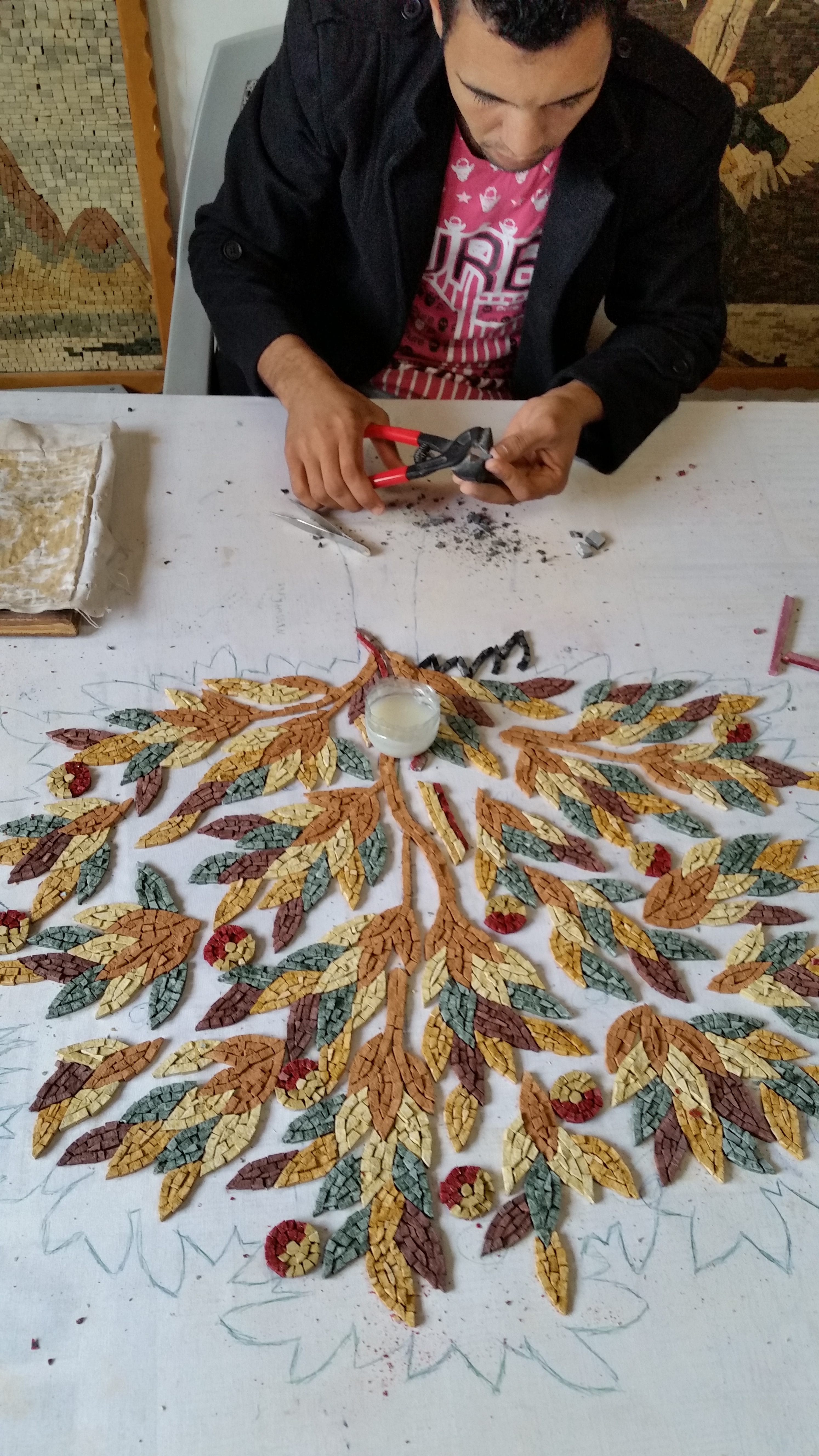 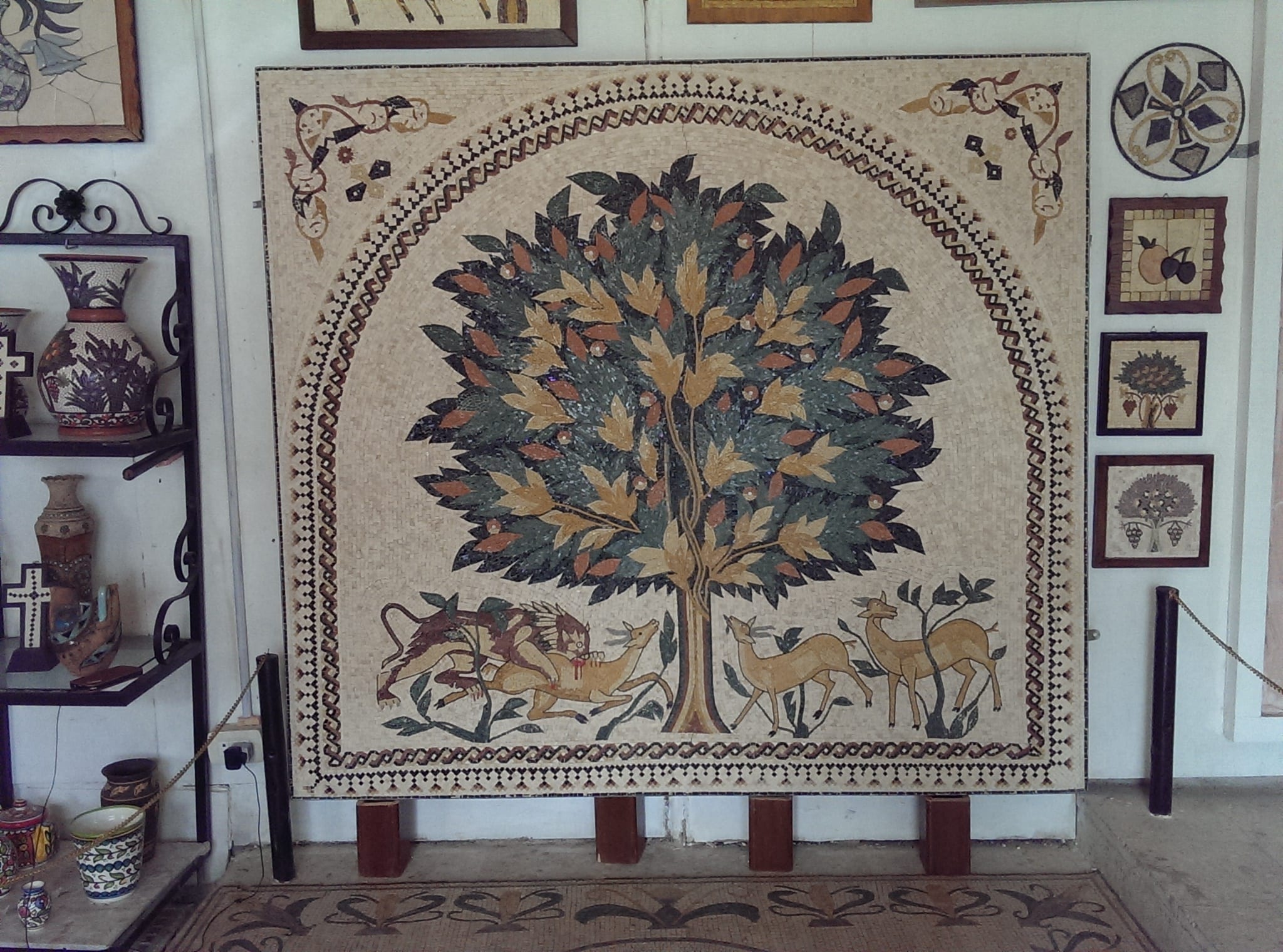 The pomegranate tree is a popular motif for Jordanian mosaics

Before continuing on to Madaba, we made what Jim referred to as a “commercial stop” at the Desert Treasure Bazaar–mostly to use the restrooms, but also to view a demonstration on how a mosaic is created. The highly skilled artisans had produced a lot of beautiful pieces which, of course, were all for sale at special prices just for us, but we were an unprofitable group. Despite their best efforts to persuade us, no one bought a thing. 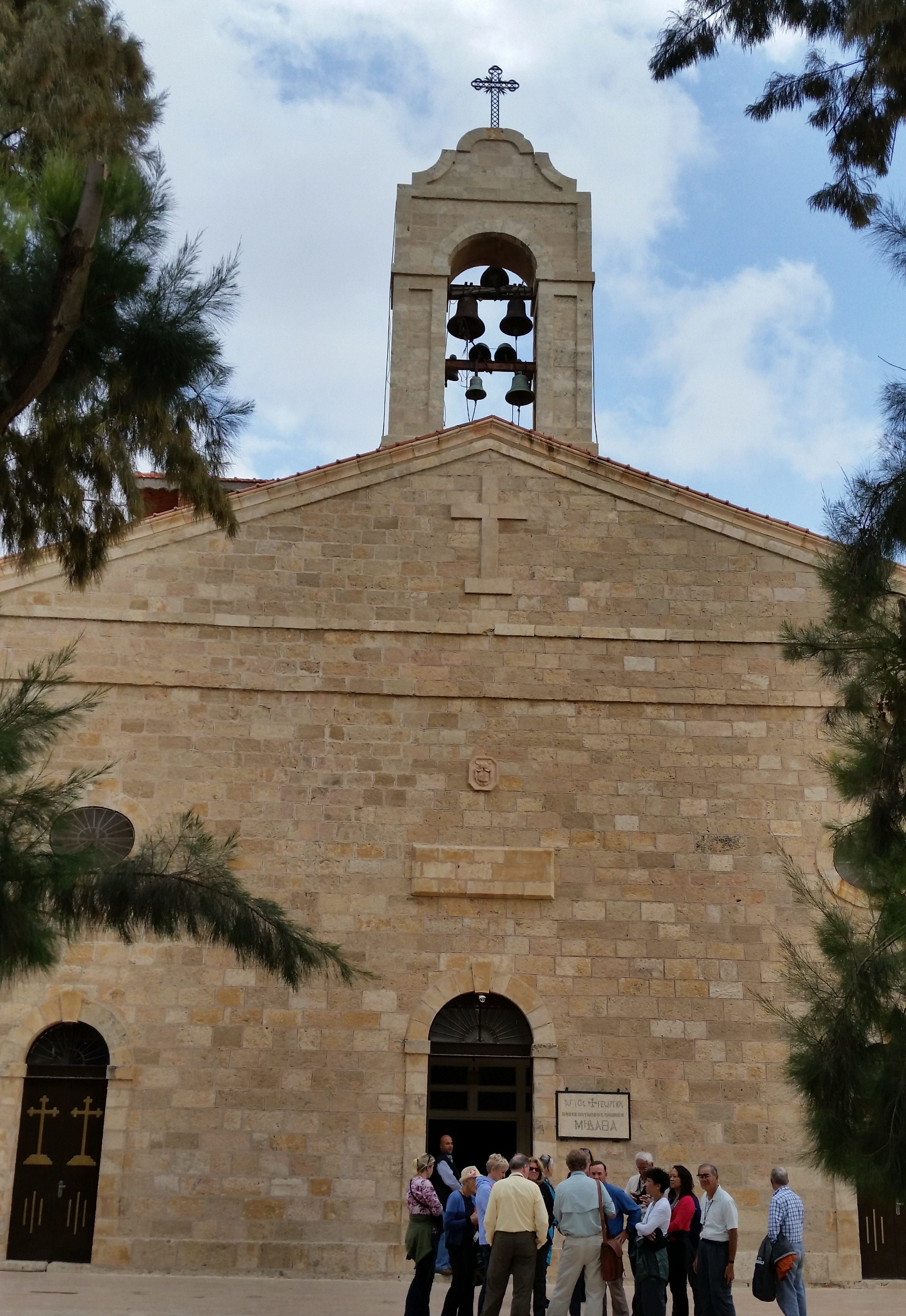 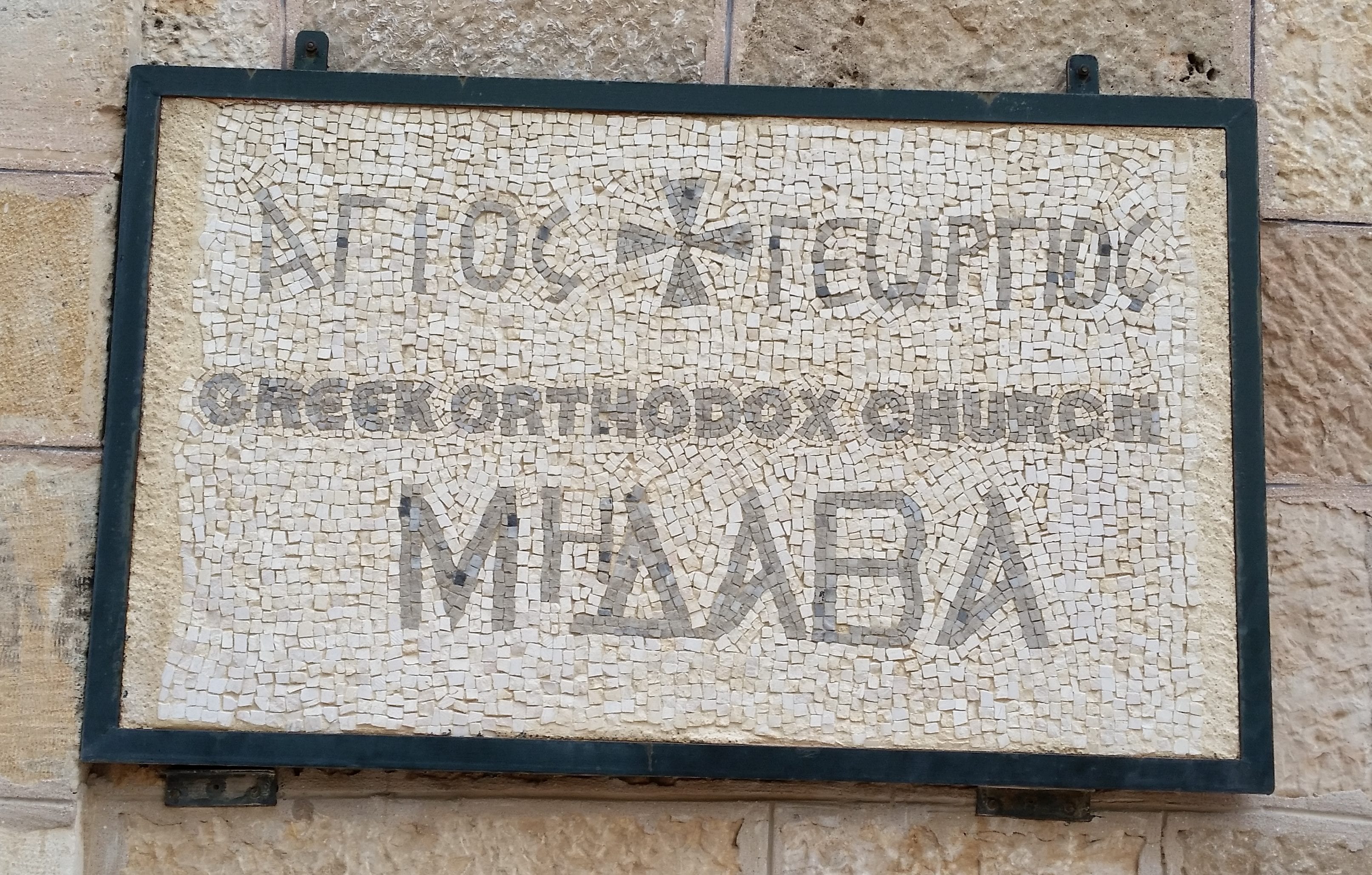 The sign for St. George Greek Orthodox Church is rendered in mosaic

Our final stop of the morning was at the Church of St. George in Madaba. The city has the highest concentration of Christians in Jordan, estimated at twelve percent of the population. The church is the home of a famous Byzantine-era mosaic map created in the sixth century AD to show every significant Christian holy site in the Middle East. Unlike most maps, it is not oriented with north at the top; rather, it is oriented in the same direction as the church’s nave so that a religious pilgrim would be able to stand facing the altar and see which direction he should go to reach the City of David, Joseph’s Tomb, or Jacob’s Well, or whatever his destination. A street in Madaba Marble slabs line the sidewalk outside a builders’ supply shop

While we were visiting the church, our guide stopped at a food shop and got us some shawarma, the Arab version of a gyro. If he, a Jordanian, bought them, they cost $2.50; if we Americans had bought them ourselves, we would have been charged more than twice as much. (Thank you, Zaid–they were as delicious as promised!) Grapefruit and pomegranates are plentiful here

The three-hour drive from Madaba to Petra took us through territory that looked even drier and more devoid of vegetation than most of the deserts of the American west. However, what we initially thought were mirages were actually wide pools of rainwater. The heavy rain that had come down this morning–according to Zaid, the first since last May–had not only produced these placid pools, but also some rushing, muddy rivers in the usually dry ravines, with currents that looked as turbulent as any whitewater Michael has rafted.

Flooding along the King’s Highway

During our drive, Zaid pointed out some phosphate mines and explained that the mineral is one of his country’s primary exports. Along with Russia, the US, and China, Jordan is the among the world’s top producers of phosphate. Our Jordanian bus with our military escort

Besides talking with our fellow travelers–or trying to sleep–the only other thing we got to experience on the ride to Petra was a stop at a military checkpoint. Apparently, our group did not present any security risks.

The sun was just beginning to set when we arrived at the Petra Guest House Hotel, which incorporates one of Petra’s ancient cave tombs into its architecture. (The bar-bistro is located there.) Fortunately, our rooms are much less cavelike; while not quite as luxurious as those in Amman, we should be very comfortable here for the next couple of nights.

The view from our window: the moon rising over Petra An extensive dinner buffet was ready for us soon after everyone had checked into their rooms. The best part was an array of salads, cheeses, hummus mixtures, and other items suitable for filling a pita pocket (or simply a plate). In addition, there were a number of hot dishes, including roast chicken, beef chunks in a tomato-based sauce, rice, roasted potatoes, and steamed vegetables. (The floral centerpieces on the tables in the dining room left something to be desired, however.)