The centerpiece of the first few days of our trip is a visit to Petra, a city in what is now southern Jordan that was literally carved out of solid rock by the Nabataeans about two thousand years ago. The place was abandoned after a massive earthquake in 749 AD and remained undiscovered by the outside world until 1812. It’s now a UNESCO World Heritage site. (Lynn and Mark signed up for this part of the tour, but Judith and Richard did not, so we won’t see the latter pair until Thursday.) Before we can tour Petra, however, we have to get out of Cincinnati.

Cathy K, who lives across town near Lynn and Mark and has a vehicle big enough to accommodate five adults and a lot of luggage, had kindly agreed to take all of us to the airport for our flight to Amman. We had thought that Cathy was going to pick up Lynn and Mark at 4:30 p.m. and then come get us, so we figured that they would be at our house about 4:50. However, a little before 4:30, Nancy was sitting at the computer, updating house- and cat-sitting instructions for our vacation caretakers, when Michael called out, “They’re here!” Apparently, Lynn and Mark were really eager to begin this adventure. 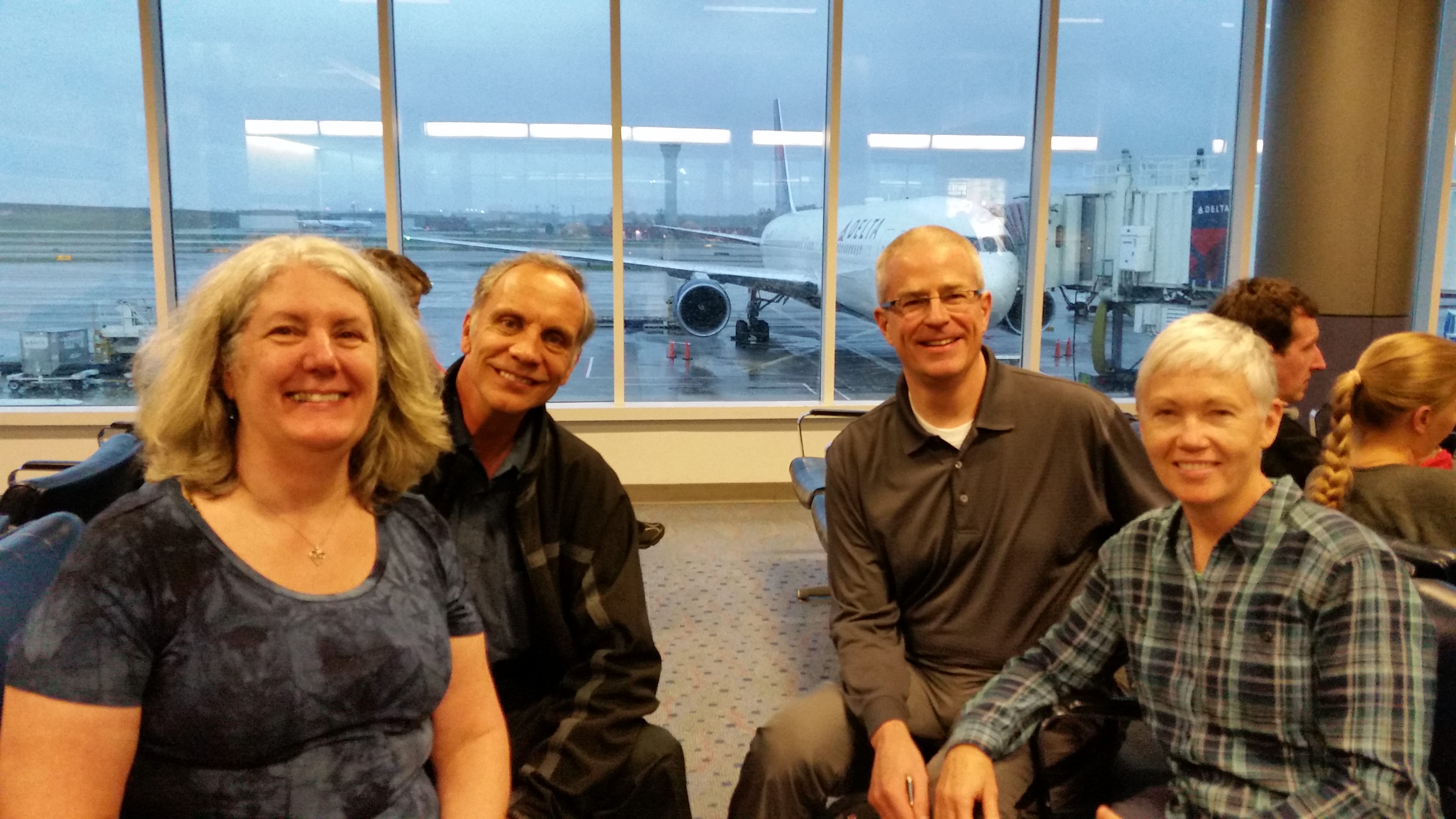 Waiting to board our flight from Cincinnati to Paris

Like the best taxi drivers, Cathy entertained us as she drove with stories of her family’s various encounters with bedbugs, scabies, lice, and other foreign invaders. Unlike the best taxi drivers, however, Cathy confessed to being unsure of how to get to the airport, having always sat in the passenger’s seat on previous trips to CVG. Even though we kept reassuring her that she was doing just fine, once we passed under the Terminal—Departures sign, she exclaimed, “After riding with me, you guys must be relieved that you’re finally off the freeway and on your way to a violent, war-torn country!” 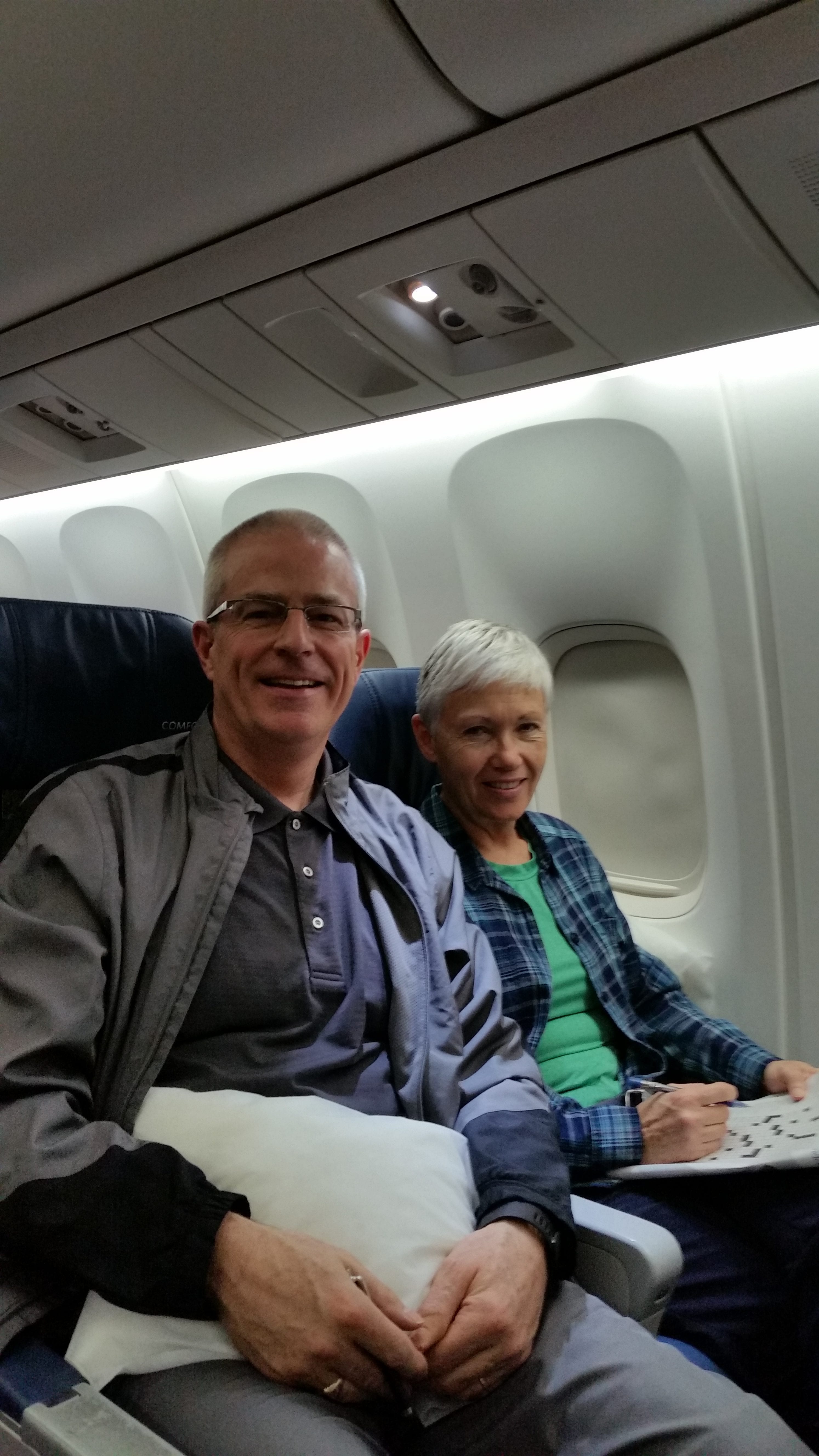 Michael and Nancy in flight

Cincinnati’s rainy skies didn’t provoke any weather delays, so we were in the air by 8:00 p.m. Having not succumbed to the temptation of a chocolate milkshake while waiting at the gate as had (ahem) some people in our group, Nancy was happy that dinner service began as soon as we reached cruising altitude. After consuming our spinach ravioli (not bad), iceberg lettuce salad (crisp but blah), and pretzel rolls (ruined by refrigeration) we had no trouble choosing a movie to watch from among the dozens available. Several months ago, we had been intrigued by a preview of Me and Earl and the Dying Girl, and the film—about a couple of Pittsburgh high school kids who befriend another student after they learn that she has leukemia—more than fulfilled its promise. It was funny and heartbreaking in all the right ways.

When the movie was over, it was time to hunker down and try to get some rest. We had scored bulkhead seats for the seven-hour Cincinnati-to-Paris leg of the flight (Mark and Lynn were much farther back in the 737) but our extra leg room didn’t make it any easier to sleep. Michael alternated between stretching out in the reclined seat, curling up on the floor, and walking the aisle—all to little avail. Nancy preferred the times when he was either on the floor or in the aisle because then she could put her legs across his seat, but that position availed just as little. Neither of us got more than an hour or so of sleep before the lights came back on and little boxes of breakfast were passed out. 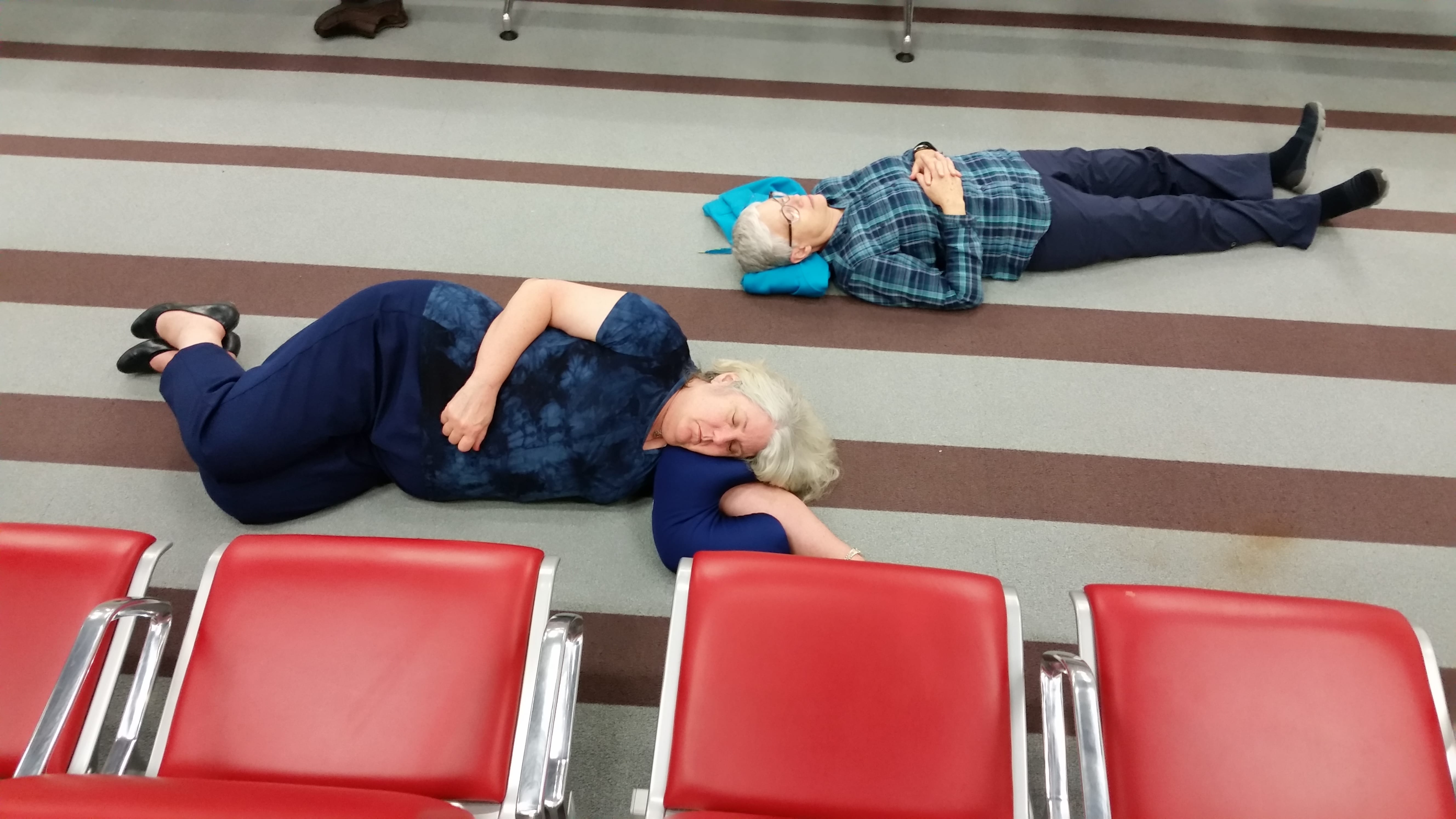 Lynn and Nancy trying to sleep in the Paris airport

It was about 8:30 a.m. when we landed at Charles de Gaulle Airport. Our checked luggage was going on to Amman and so were we, so there was no need to go through French customs and immigration. Since we had a five-hour layover and the seats in the arrivals waiting area were completely deserted, we decided to hang out there for a while and try to get a little more sleep. Eventually Michael roused us, indicating that we’d better head for the terminal where we would board our flight for Amman. We would look for somewhere to eat lunch along the way. For some reason we had to go through airport security again after a short ride on the inter-terminal shuttle (forcing Nancy to empty the contents of her collapsible water bottle into a potted plant), and then we were dismayed to find that all the cafés and restaurants must have been in the other terminal because the only food that seemed to be available in this one was pastries and packaged sandwiches. Having waited in a very long line to get through security, we weren’t about to go back, so Michael bought a ham sandwich and Nancy got a flabby square of broccoli quiche. Mark and Lynn contented themselves with the nuts and cookies they had brought with them. (This was not the kind of meal we had expected from a culture that normally takes such pride in its cuisine.) 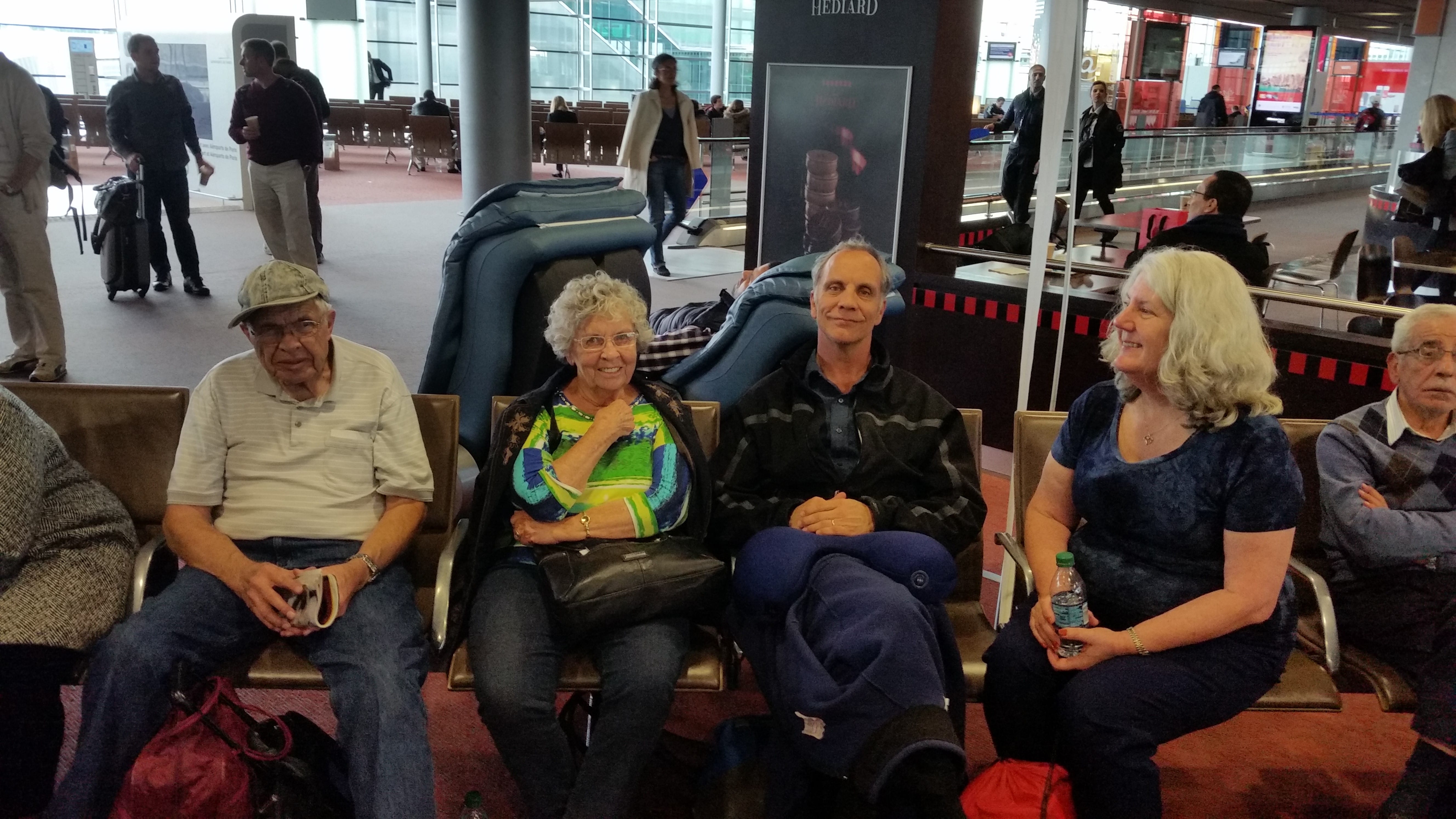 The happy part of our sojourn in Paris was meeting up with Emery, Mark’s parents, and several other members of our tour group who had come from Salt Lake. 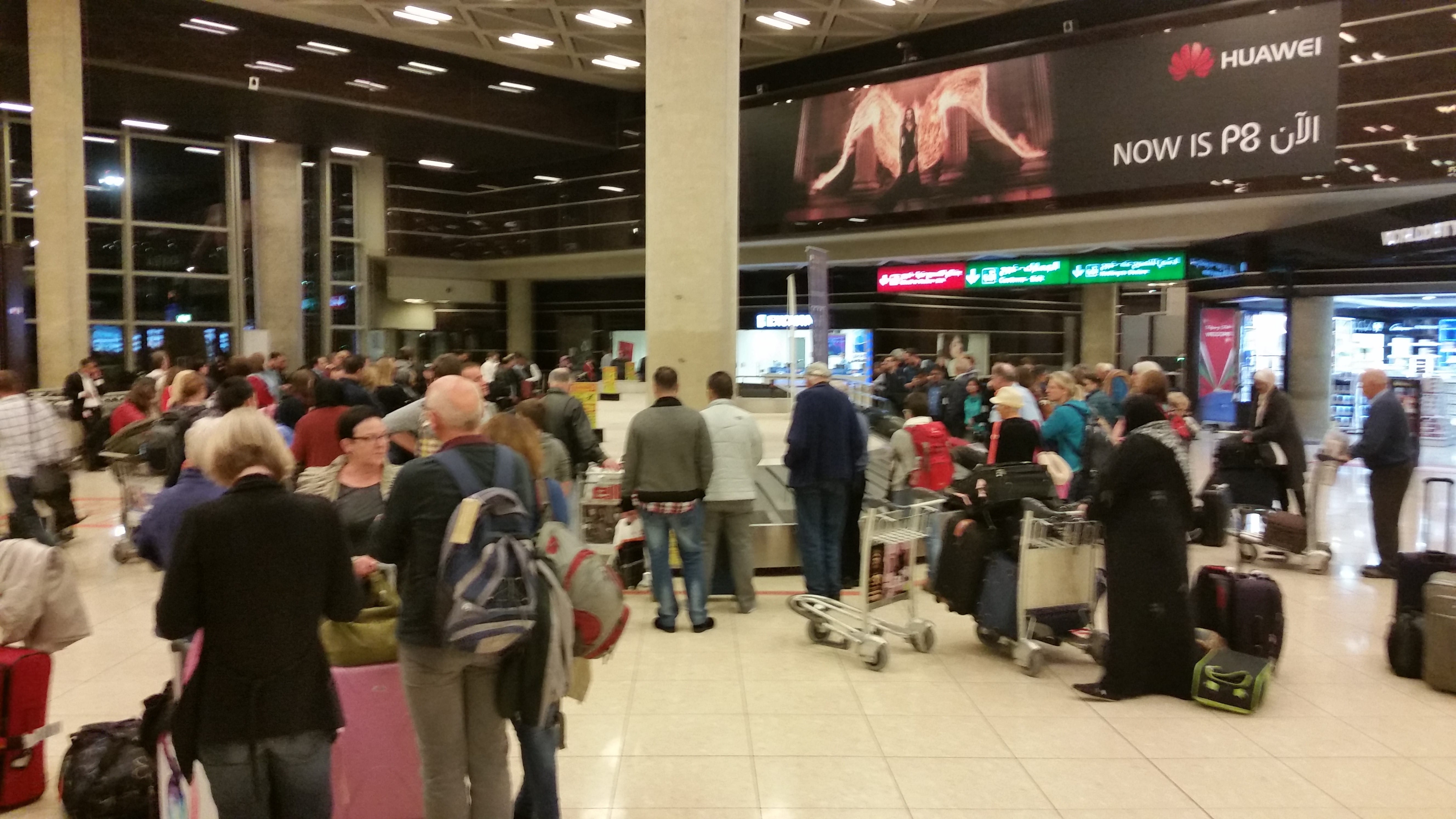 Collecting our baggage at Queen Alia Airport in Amman

We were a little more cramped during the six hour flight to Amman, especially because the Palestinian man seated next to Nancy did not share her conception of “personal space.” After dinner—poulet aux champignon (chicken with mushrooms), mashed potatoes, and a salad of chopped vegetables seasoned with a lot of cumin—Nancy began reading the Qu’ran while Michael watched a French movie called On Va Tout Casse which he pronounced “very good.” It must have been very moving as well, because he choked up as he tried to tell Nancy what it was about and was never able to finish his synopsis. 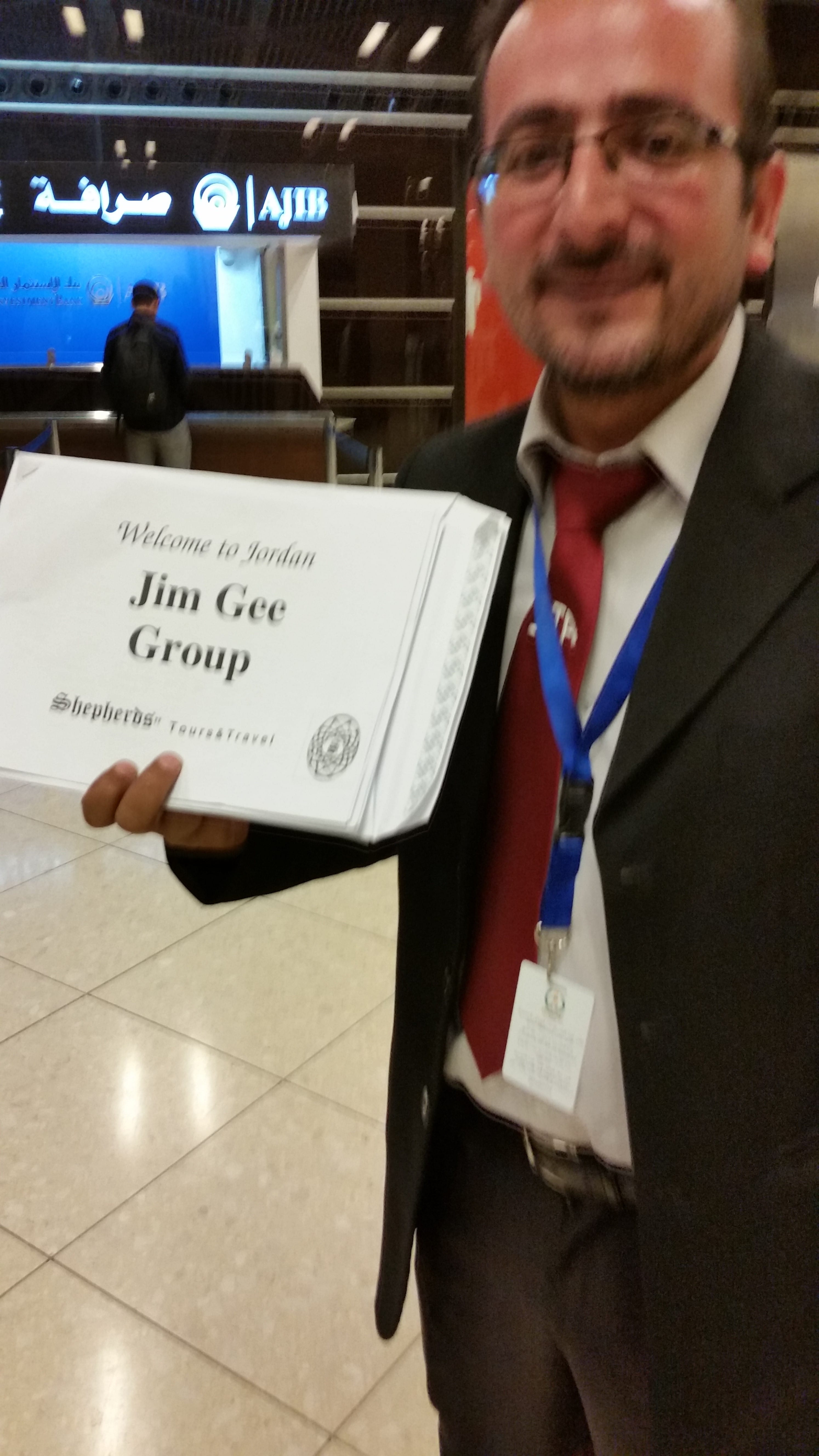 We landed about 9:15 p.m. (Sunday) at Amman’s Queen Alia Airport, where our Jordanian host was waiting for us. He collected passports from everyone in our group and took care of the immigration process while we collected our luggage. Jim Gee, our tour leader, was waiting for us outside and shepherded a very sleepy group to our awaiting transportation. Then we were bused through the city (past the Saudi embassy, past the Syrian embassy) to the Grand Millennium Hotel, a building made of gleaming glass inside and out. (Indeed, the glass wall between our bedroom and bathroom afforded a full view of anyone using the toilet until we discovered a drop-down window shade behind the tub.) The room was luxuriously appointed, but to us its best feature was definitely the king-sized bed, where, after a very late dinner, we could finally stretch out horizontally and get some sleep. 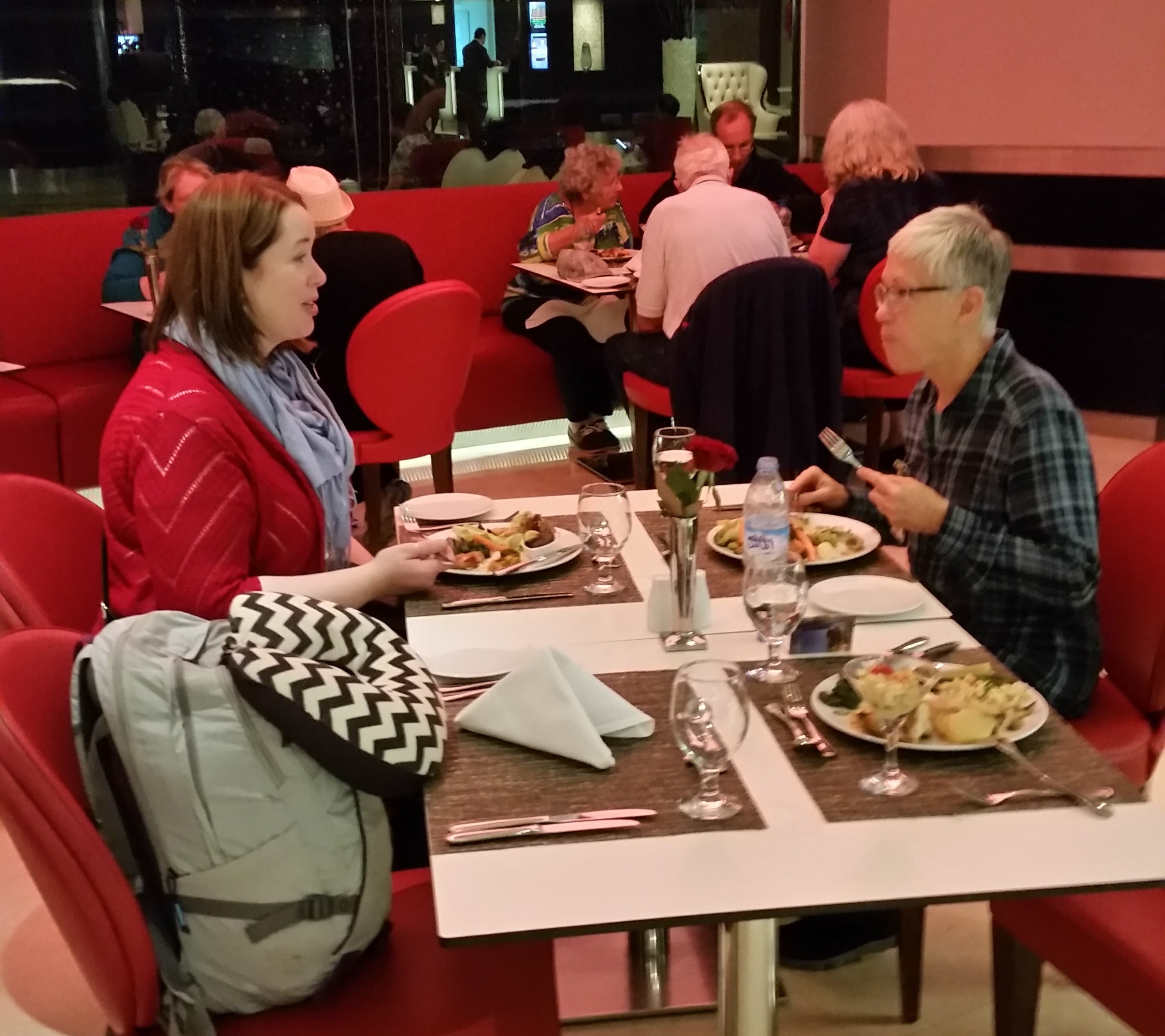 Emery and Nancy in the Grand Millennium dining room 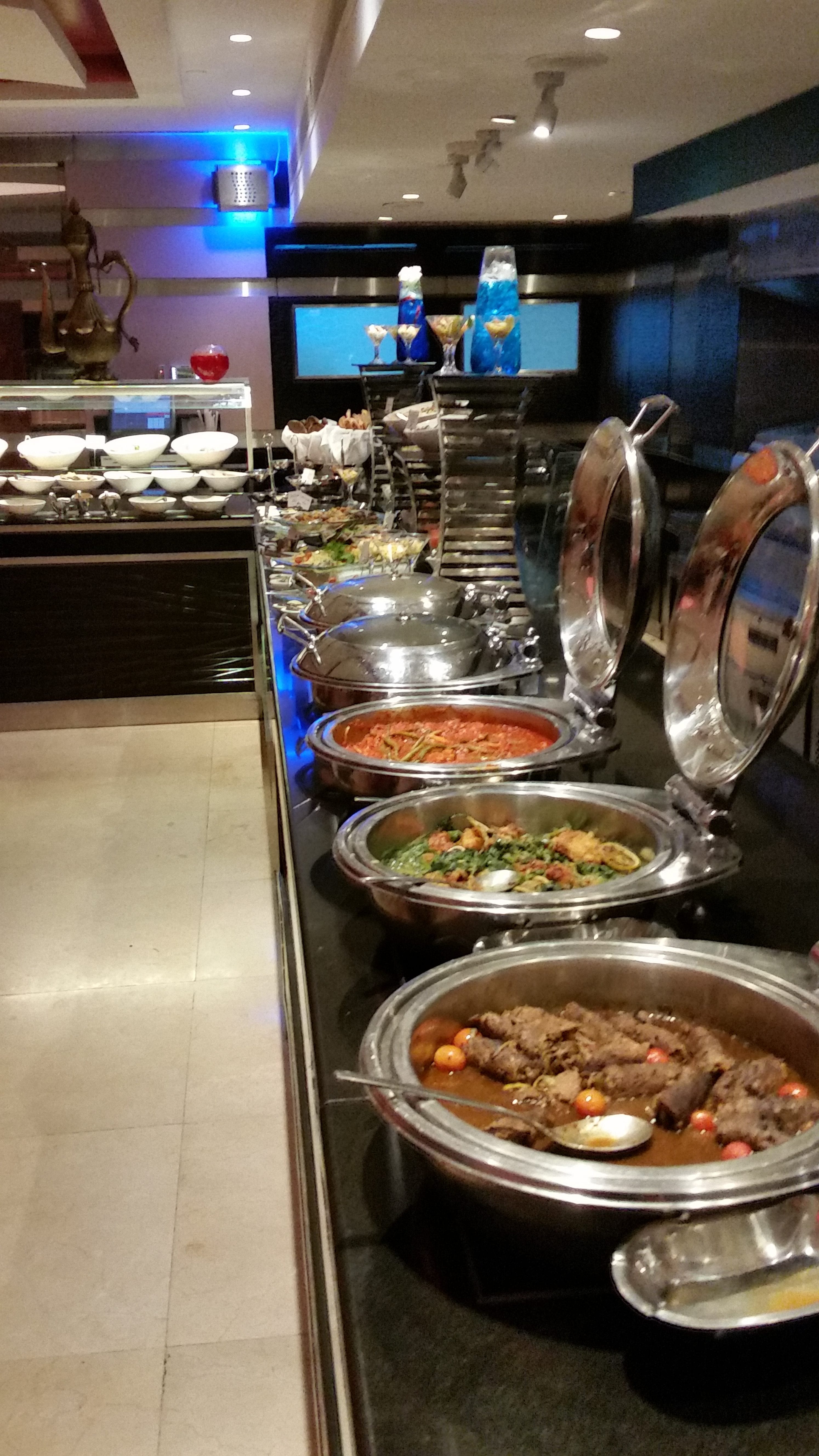 Dinner buffet at the Intercontinental Hotel