Every evening, one of the maids at the Radisson Blu lets
herself into our room, leaving two bottles of water (sparkling for Michael,
still for Nancy), a couple of chocolates, and a little slip of paper with the
next day’s weather forecast. Last night, the forecast called for clouds and wind
but no rain, so Nancy decided that today was the day to take the long walk from
the point where the River Corrib meets Galway Bay, around the Claddagh Quay, through South Park, and west along the Promenade above the sandy beach at Salthill to Blackrock—a total distance
of about seven kilometers.


You know
that “old Irish blessing” one often sees on plates and plaques in kitchy
souvenir shops:
May the road rise to meet you
And the wind be always at your
back …?
Well,
someone must have forgotten to offer the second line of that particular prayer
in Nancy’s behalf today, because the wind was in her face all morning, and it
was cold. Fortunately, she had gone
out prepared: thermal tights under her pants and a pair of wool socks inside
her hiking boots, a long-sleeved thermal shirt under a turtleneck, a thermal
cap under the hood of the down jacket, gloves, and the long hooded raincoat
over everything. She needed all that weight not just to stay warm, but as
ballast to keep from keeling over in the wind—and even though it never rained, the
waterproof coat provided a needed barrier against blowing sand.

The scenery
was worth the trouble. Unfortunately, the limited camera settings on Nancy’s
HTC phone just can’t do justice to the brooding clouds and dark, dramatic surf
along this stretch of the Wild Atlantic Way.

Salthill has a wide, sandy beach
and is obviously a popular resort area—in season. Today, however, it was nearly
deserted, and most of its amenities were closed. A notable exception was the
golf course at the far western end of the Promenade, where more than a few
intrepid golfers were attempting to steer their balls through the wind. When
she turned back toward Galway, Nancy also was surprised to see two human
figures in the surf: two women wearing regular tank suits. She happened to meet
them as they climbed up the stone steps to the Promenade; one of them was
probably in her twenties, but the other looked close to seventy—likely a
grandmother and granddaughter.

“You women
are a lot hardier than I am!” Nancy shouted as they approached, so they could
hear her over the wind.
“Oh, we’re
used to it,” the older one shouted back, smiling. 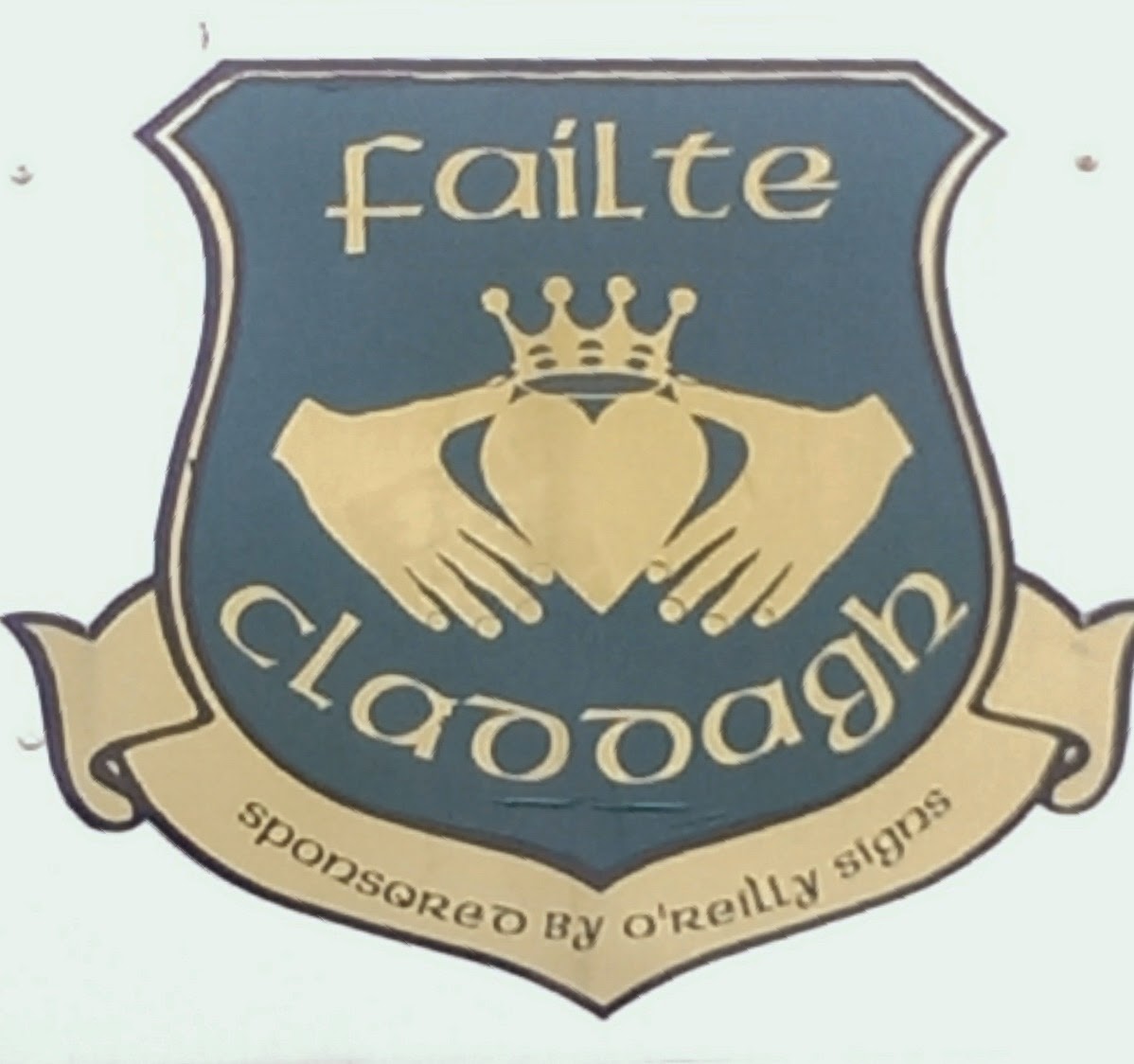 The walk
back from Salthill wasn’t quite as long as the way there, because Nancy took
the road into town instead of following the footpath through South Park and out to the end of Nimmo’s
Pier again. The road went through Claddagh, which was once a distinct fishing
village but got overwhelmed by the city of Galway during the last century. Thatched
cottages have been replaced by undistinguished housing tracts, but the district
is still proud to claim ownership of the Claddagh ring (the one with a
crown-topped heart surrounded by clasped hands), which was designed by a local
goldsmith during the seventeenth century.

After
walking for almost four hours without any potty breaks, once she got back
into Galway Nancy headed for the first public toilet she could think of: the
well appointed facility in the Galway City Museum. Since she hadn’t seen anything beyond
the ground floor on her first Museum visit earlier in the week, she walked
upstairs and perused the contemporary works in the art gallery, an educational
exhibit on marine conservation, and a display called “Galway Goes to the
Movies.” She had expected the latter to feature items from films set or shot in
Galway, but instead she found an old reel-to-reel projector, a set of wooden
speakers from Galway’s first cinema, and a wall covered with old movie posters
(including, of course, some for The Quiet
Man). 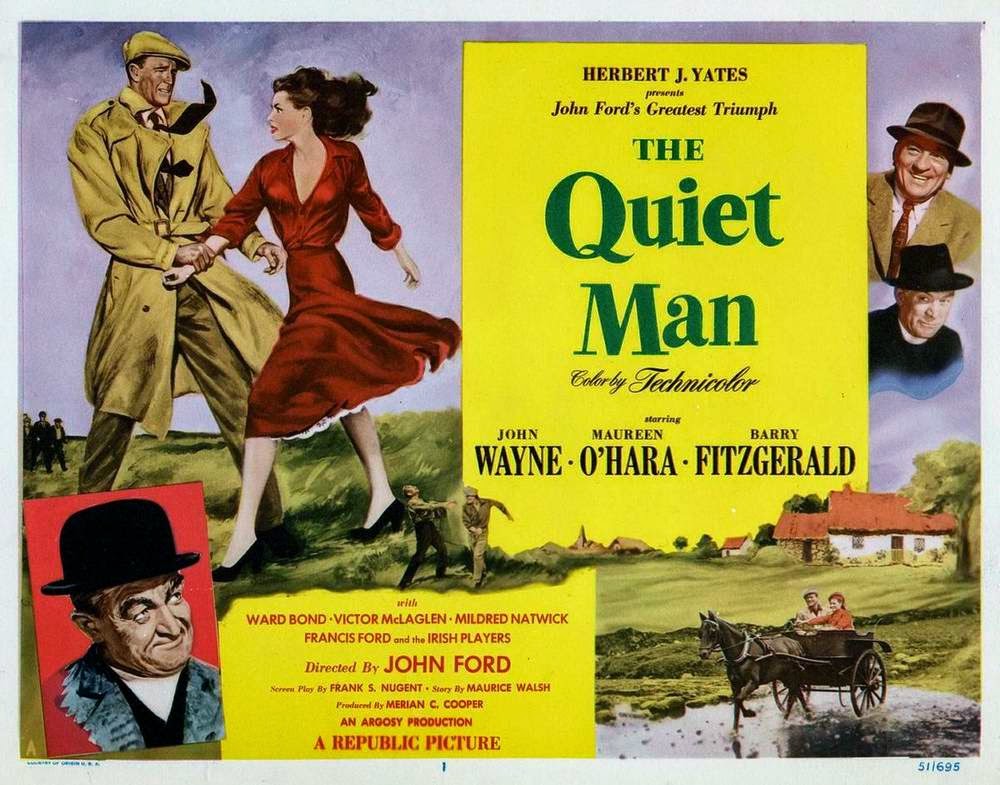 Back at the
Radisson, Nancy again ate a late lunch consisting of bread, cheese, and fruit
saved from the breakfast buffet, then worked on the blog while waiting for
Michael to return from work.
The only seats
that were available when we arrived at the tiny Latin Quarter restaurant were
at a counter overlooking the street, so we sat there and watched the passersby while
sharing a broiled hake fillet with sides of couscous, beets, and greens, and a
baked brie with walnuts and truffles, decorated with dabs of cranberry and
apple coulis. For dessert, Nancy ordered a pear poached in black currant juice,
which came with champagne-flavored whipped cream and two miniature madeleines;
Michael’s crème brulée was served with yummy little bars of chocolate cake.