Among the places Niamh O’Leary mentioned when we asked her
to recommend things to do in Ireland that might not be on the average tourist’s
radar was the Ceardlann Craft Center in Spiddal, a coastal village about twenty
kilometers west of Galway. “It’s never crowded, so you can have great
conversations with the artisans themselves,” Niamh had explained. “And it’s a
good spot for some less-chintzy souvenirs.” Realizing that this would be her last
opportunity to go to the craft center because we were leaving Galway for good
this evening, Nancy decided to go to Spiddal this morning.
Last night, she had
made sure that Ceardlann (pronounced CARED-lan) would be open at this time of
year, while Michael checked the bus schedules. He determined that the regular Bus
Éireann service going to Spiddal wouldn’t leave Eyre Square until 11:30, but
there was a Lally Tours bus going through Spiddal that was supposed to leave
Jurys Inn (a hotel near the Spanish Arch) at 9:16. The only two return options
were the Lally bus at 13:20, and the Bus Éireann at 14:10. Since the trip to
Spiddal would take about forty minutes, Nancy decided that in order to make the
journey worthwhile, she’d better try to catch the 9:16 Lally bus. This meant no
lingering over the breakfast buffet this morning, because she also had to pack
everything, check out of the hotel, and leave all the luggage with the porter
before she headed out.
Since she wasn’t sure exactly where at Jurys Inn the bus
would stop or where she should buy a ticket, she arrived at the hotel about
8:45 and went inside to inquire. The clerk at the reception desk said she
didn’t really know anything about the Lally Tours bus, but assumed it would
stop at the bus shelter across the street and that Nancy could buy a ticket
when she boarded. Signs at the shelter didn’t mention Lally Tours, so all Nancy
could do was plan to be at the stop by about 9:10 and hope the bus came.
Rather than spend twenty minutes standing in a cold bus
shelter, Nancy chose to walk around and look in shop windows. Up a narrow alley
she had not explored before, she discovered what appeared to be an
archaeological dig within a glass enclosure underneath a modern building. The
site turned out to be the foundation of the Hall of the Red Earl, Galway’s
oldest surviving medieval structure. Nancy wanted to read more about the
history of the site and examine the artifacts on display around it, but that
would have to wait until later because she needed to get back to the bus stop.
Right on time, a bright yellow double-decker bus emblazoned
with “Lally Tours” appeared on Quay Street. Nancy waved her arm at the driver
and he stopped. “Does this bus go to Spiddal?” she asked.
“Yes,” replied the driver, “but this bus is only for
tourists, so you can’t get on.”
The bus was three-quarters empty, so Nancy persisted. “But I
am a tourist,” she said. “How much is
a ticket to Spiddal?”
“What I mean,” said the driver, “is that you can’t just get
on and buy a ticket. This is a Connemara tour bus. You have to book ahead. If
you want to get to Spiddal, you have to take Bus Éireann.”
“But the next Bus Éireann to Spiddal doesn’t leave for two
more hours, and I need to get there this morning. I didn’t know I was supposed
to book ahead.”
The driver rolled his eyes, obviously anxious to keep to his
schedule. “All right. I shouldn’t do this, but I’ll take you. Four euro. Now
just go sit down. You can give me the money later.”
So Nancy took a seat, feeling very pleased.

This was one of those days when the wind kept blowing cloud
curtains across the sun and whipping the sea into froth. Nancy was glad that
the seat she had chosen was on the left side of the bus, with nothing but
window glass between her and the Wild Atlantic shore. She tried to watch the
road signs carefully so she would know when she got to Spiddal, and hoped she
wouldn’t have any trouble finding the Ceardlann Craft Center once she got off
the bus.
She needn’t have worried: a large sign encouraging travelers
to visit the Ceardlann Craft Center in 500 meters appeared on the left, just
before a stone marker engraved with An
Spidéal (the Irish spelling of Spiddal). Ceardlann, located just opposite
the sandy beach, literally could not be missed. Nancy stood up and moved toward
the door. Dropping €4 into the bus driver’s hand, she profusely thanked him for
his kindness and got off.
The dozen or so brightly painted little cottages that
comprise the Ceardlann Craft Center looked completely deserted on this blustery
morning, and at first Nancy was afraid that the website had given her misinformation
about its operating hours, but then a couple of men walked out of one of the
cottages and she noticed a sign that said Open
hanging on the door of another, so even though she also saw several Closed signs, her fear dissipated.
Each cottage in the Ceardlann complex is the workshop of a
different artisan. The first one Nancy found open displayed stained glass ornaments,
jewelry and lamps in its windows, and behind the counter two women were busy at
a workbench, fusing pieces of colored glass. Sue Donnellan and her assistant assured
Nancy that most of Ceardlann’s shops would open during the course of the day. “A
few of the artists go somewhere else during the cold months, and some teach
classes, so they may not open until this afternoon,” Sue explained, “but we’re
here almost every day. We have to work year-round to produce enough pieces to
meet demand during the summer.”
Other shops that eventually opened up during the morning
included those of painters Geraldine O’Rourke (more on her later) and Andrea
Rossi, a Brazilian who had met and married an Irishman while studying art in
London, and then decided that she wanted to raise her children in this little
village by the sea. Other artisans at work included a potter, a leather worker,
a metalsmith, a paper crafter, a candle maker, a screen printer, and a seamstress
who restored vintage clothing. Nancy was disappointed that the weaver and the
basket maker were away, but she enjoyed admiring all the creative handiwork on
display, and especially being able to talk with the artists while they worked.
The bakery-café at the back of the complex, Builín Blasta
(Irish for “Tasty Loaf”), was anything but deserted when Nancy stopped in to
get some lunch. Most of the tables were occupied by young mothers with babies,
enjoying conversation with friends over a cup of coffee or tea and one of the
bakery’s scrumptious-looking pastries. Nancy ordered a healthy beet, rocket,
and goat cheese salad before succumbing to the allure of a chocolate meringue
“Gerry,” which was served with fresh fruit and a mound of densely whipped
cream.
After lunch, having decided which of the many beautiful
handmade items she had seen she wanted to buy, she went back to a few of the
shops and made her purchases. One of these was a small painting by Geraldine
O’Rourke in swirling blue and green acrylic, called The Wild Atlantic. 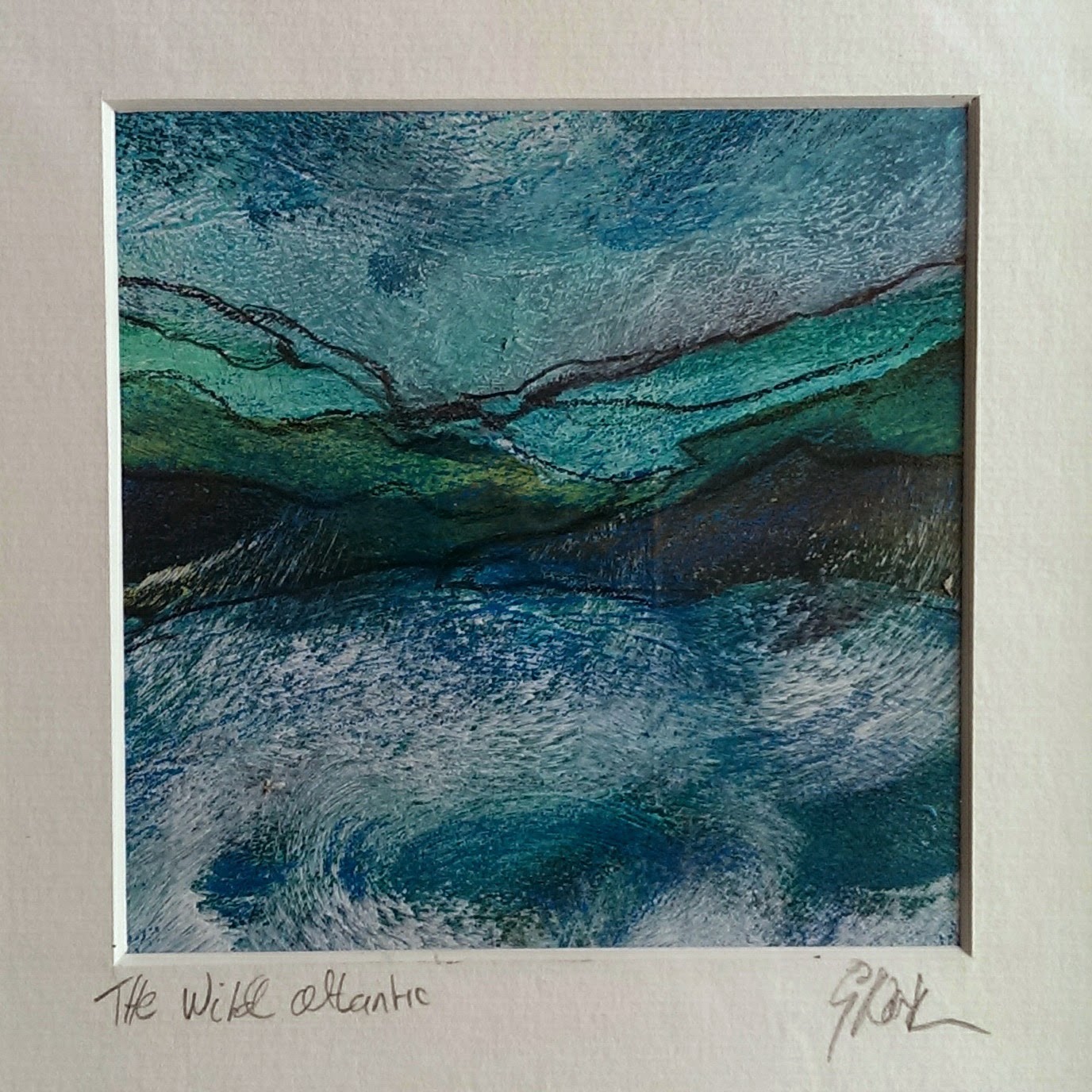 “I just finished that one yesterday,” said the artist. “I’m
so glad you like it! It’s in kind of a new style for me—I wanted to try
something different to capture the constant motion of the sea.”
“That’s exactly what it does, which is why I chose it,”
Nancy replied.
Nancy and Geraldine continued to chat while the artist
finished taping the back of the painting’s frame and added a hanging cord.
Then, with a heavier backpack but a light heart, Nancy walked back up the road
toward the bus stop.
Figuring that another Lally Tours driver might not be as
accommodating as the one that had picked her up this morning, she had decided
to take the later Bus Éireann back into Galway—and anyway, that gave her some
extra time to visit Cill Éinda (St. Enda), a pretty little Roman Catholic church
on a hill above the beach.

The Bus Éirerann stop was on a bridge overlooking the lovely Owenboliska. When the 424 pulled up and the driver
told Nancy that the fare would be €7.90, she realized how truly generous the
Lally driver had been–though she wondered whether he had simply pocketed her €4.

Arriving back in Galway before 3 p.m., Nancy still had about
an hour and a half before she had to meet Michael at the Radisson to pick up
their luggage and get on the road toward Doolin, so she went back to the ruins
of the Hall of the Red Earl. She had been there only a few minutes when a woman
came out of the office she could see through a nearby glass wall.
“Would you like to hear more about the history of this
place,” the woman asked, “or would you rather that I just leave you to look
around and read the signs on your own?”
“If you’re willing to tell me more, please do!” said Nancy.
So the woman (who was
a representative of the Galway Civic Trust) told her the history, “very
briefly,” of the Red Earl, Richard de Burgo, whose family controlled the river
crossing at Galway and the surrounding area off and on throughout the thirteenth
century. The Civic Trust lady went into quite a bit of detail about the
constant battles between the Anglo-Norman de Burgos and the native O’Flaherty
and O’Connor clans, but since Nancy knew there wouldn’t be a test at the end of
the lecture, she didn’t worry about keeping it all straight. At any rate, the
Red Earl’s hall served variously as a court house, tax office, civic meeting
area, and banquet hall for over a hundred years. Later, after the de Burgos had
fallen from power, the building was used as an iron forge before it eventually
crumbled into ruins. In 1997, the hall’s foundation was rediscovered during
excavation for a new parking garage. Recognizing its historic significance,
Galway’s Office of Public Works redesigned the parking garage to incorporate
the ruins in a way that would allow the site to be preserved, studied, and
opened to the public. Nancy thought their plan succeeded very well.
Leaving the Hall of the Red Earl, Nancy made another
serendipitous discovery: Judy Greene’s pottery shop, which occupies two narrow floors
of a restored medieval building in Kirwan’s Way. In the loft above the first
floor, Nancy could see the potter’s clay-spattered workshop, but the artist
wasn’t there. However, as she stood at the sales desk waiting to purchase a piece decorated with a charming floral motif,
she overheard another customer call the clerk “Judy.”
“Are you the potter?” Nancy asked after the other woman
left.
“Yes, I am,” replied the clerk. So Nancy had the chance to
meet and talk with yet another of the artisans whose work she had admired
today.
Saying goodbye to the potter, Nancy hurried back to the
Radisson. Michael arrived with the rental car shortly thereafter, and soon they
were on their way to Doolin.